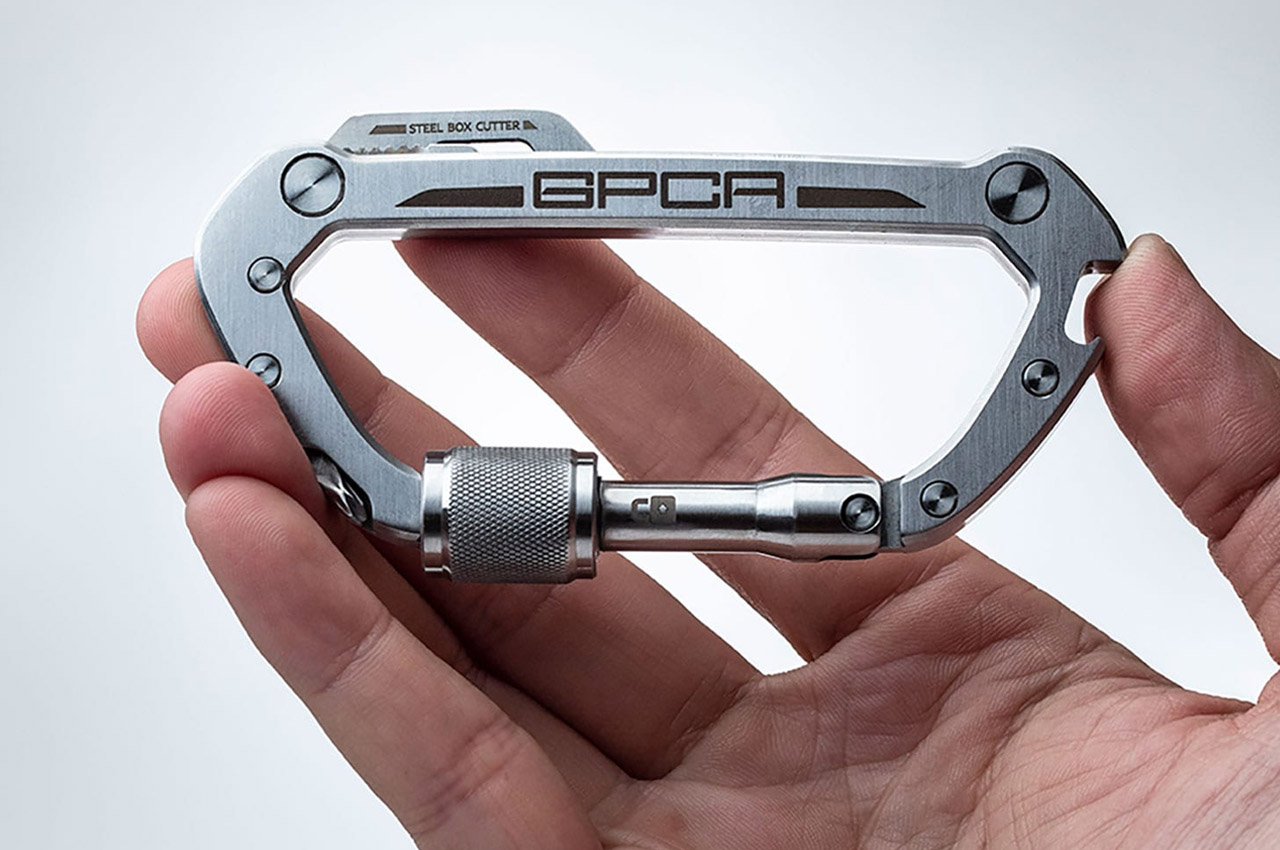 EDCs may seem small in size, but they are mighty in their functionality and use! These smart little tools can come in handy anytime anywhere, helping you out of the trickiest situations, and sometimes even quite possibly saving lives! You could be carrying an EDC for days with no real use until, in a time of need, it’ll magically come to your rescue, proving its true value! These little superheroes can make a world of difference while completing tasks. And, we’ve curated the best EDC designs we’ve seen in a while! From a GPCA carabiner that could quite literally save your life to a compact EDC thermometer that you can carry with you wherever you go – these innovative EDC designs promise to have your back no matter what! 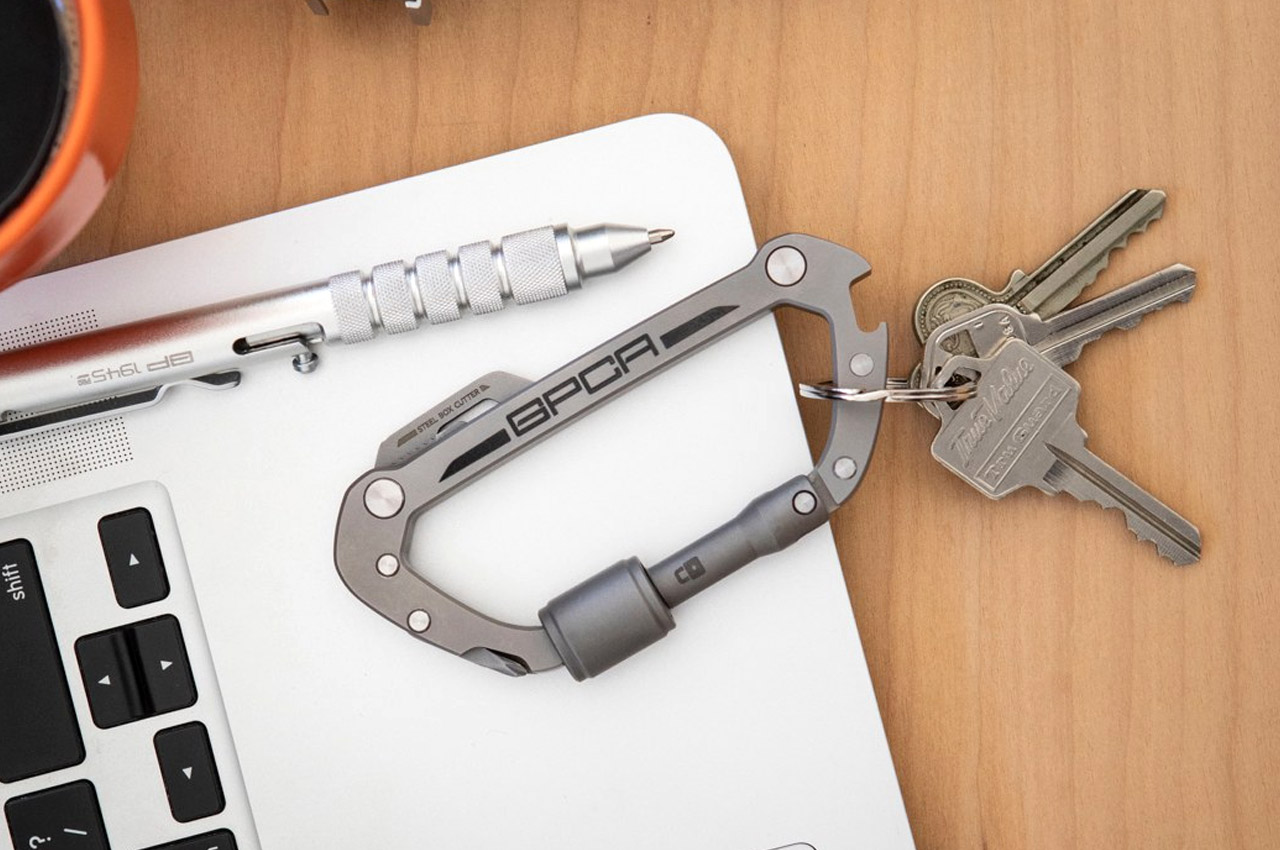 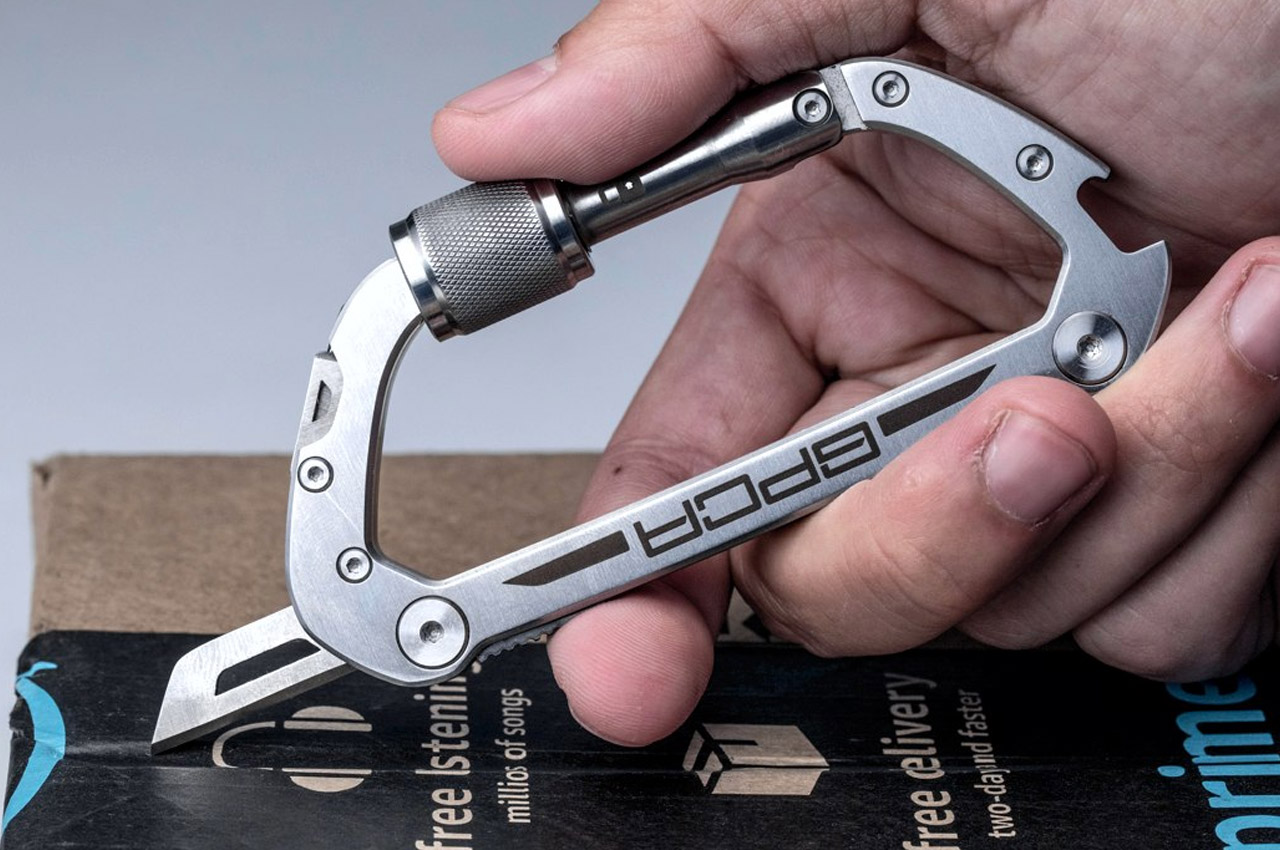 The GPCA Carabiner is a multitool designed to get you through any sort of situation. Fine-tuned to be the multitool to end all multitools, the handy carabiner comes with a set of essential instruments integrated into its design, for every brand of emergency imaginable. The GPCA’s titanium construction (there are stainless steel and aluminum variants too) literally makes it one of the toughest EDCs to fit on your belt… so much so that you can literally use the GPCA as a pair of brass knuckles to fight off any threat outdoors. The carabiner itself is sturdy enough to carry up to a few hundred pounds more than any EDC carabiners *Not rated for climbing, yet compact enough to work as a keychain. 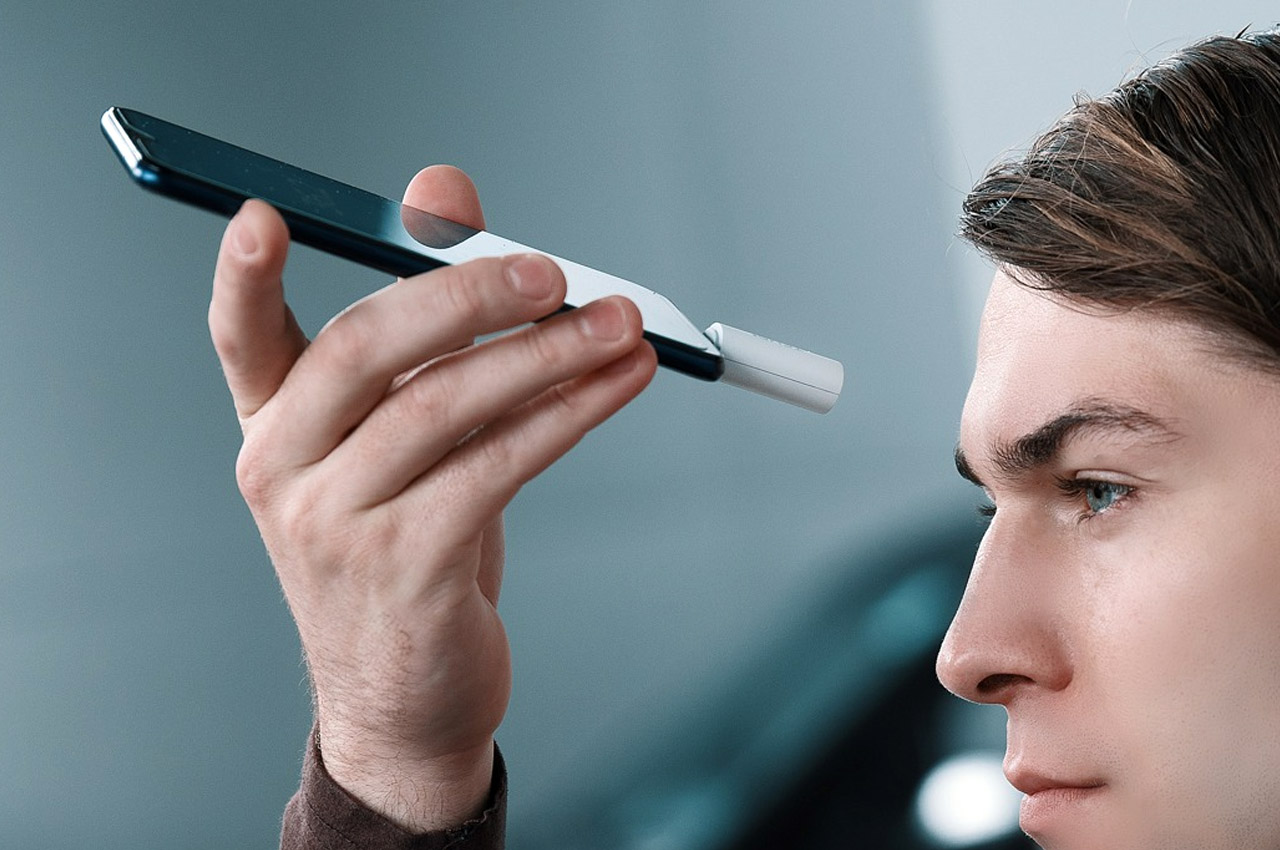 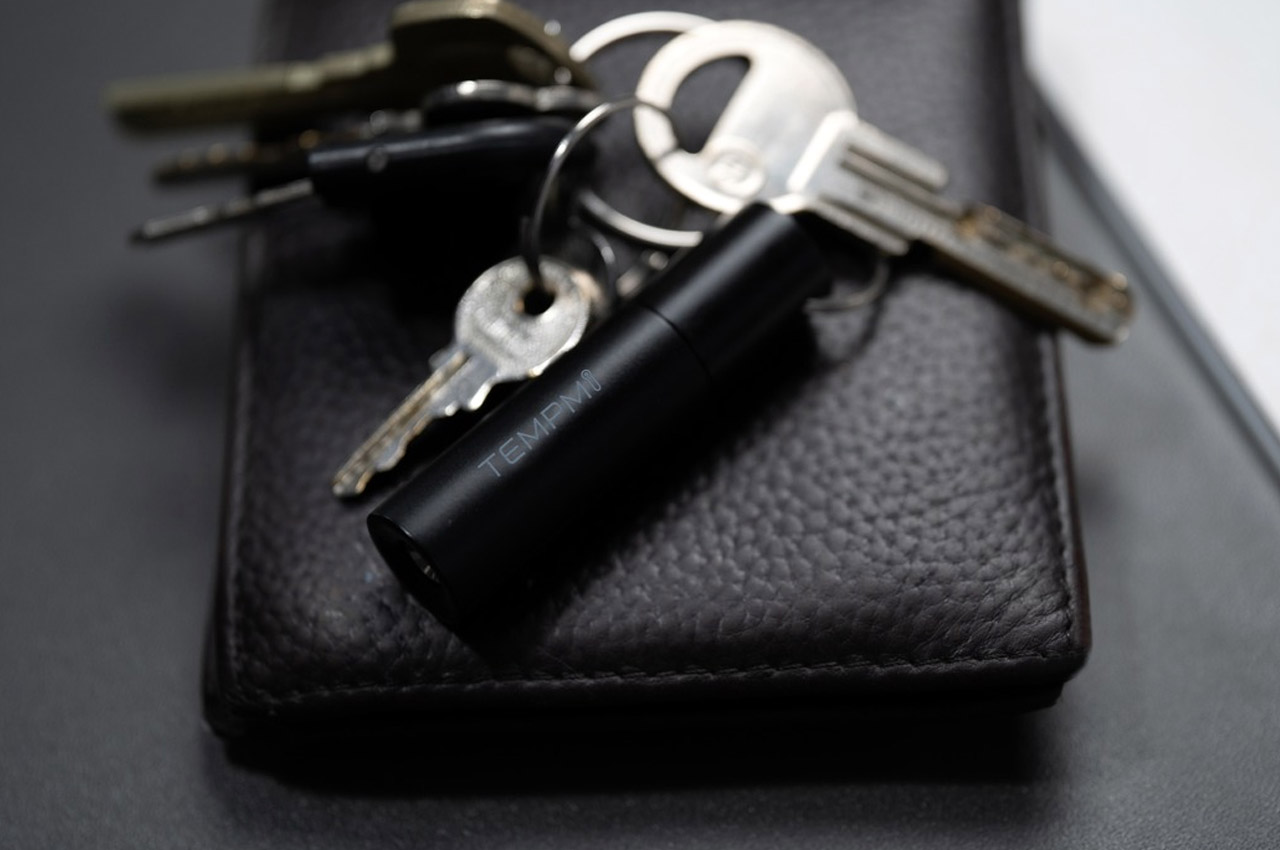 The TEMPMi isn’t a bulky gun-shaped thermometer or a fragile mercury-filled glass thermometer. It’s a tiny, battery-sized device that weighs a mere 8 grams (as much as a key) and is designed to be the kind of thermometer you carry around with you as EDC. It uses a thermopile and infrared sensor to accurately gauge temperatures without contact, working just like a contactless thermometer-gun would, but at a mere fraction of the size. The TEMPMi’s compact size isn’t just another feature, it actually allows the device to be smart too. It comes without a battery or display and operates by plugging into your smartphone. This enables the TEMPMi device to record your readings for you, turning the thermometer into a smart one. 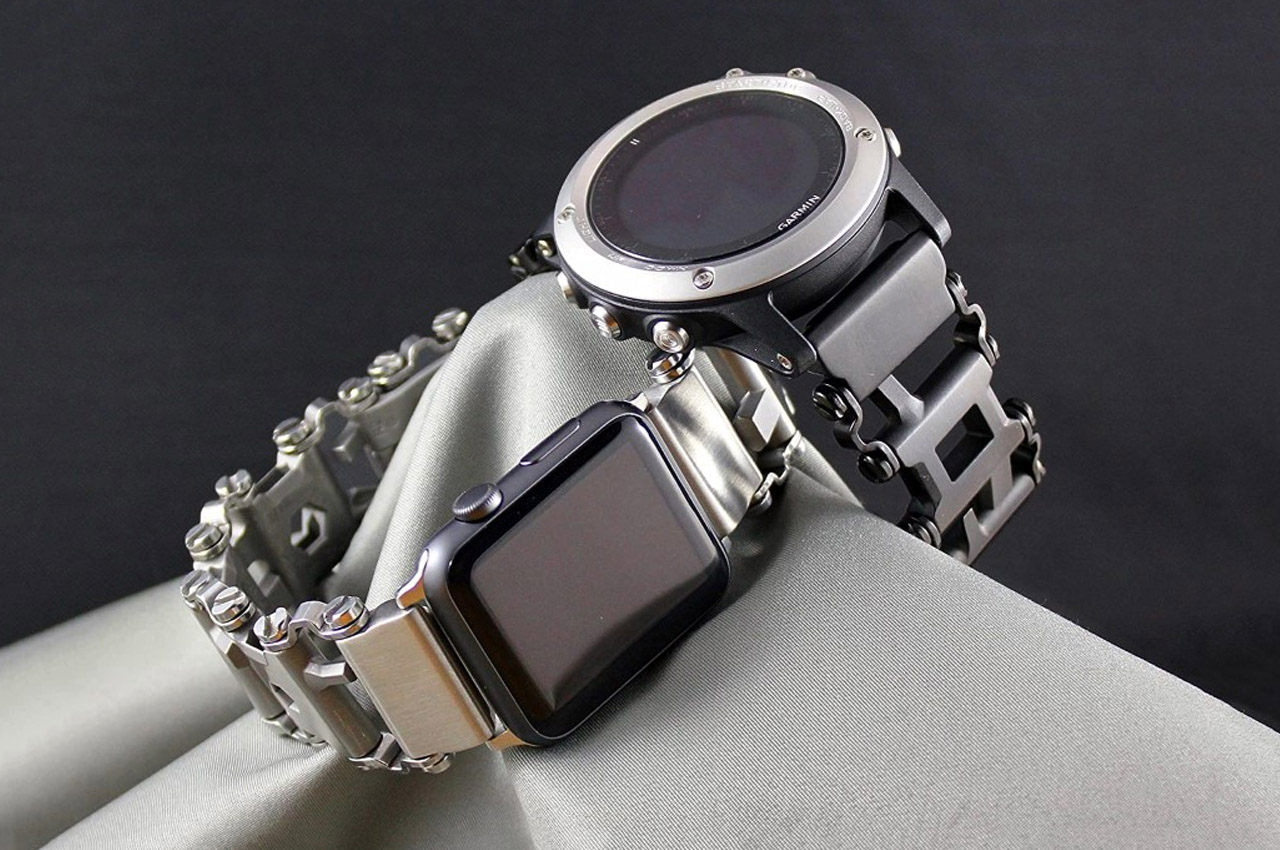 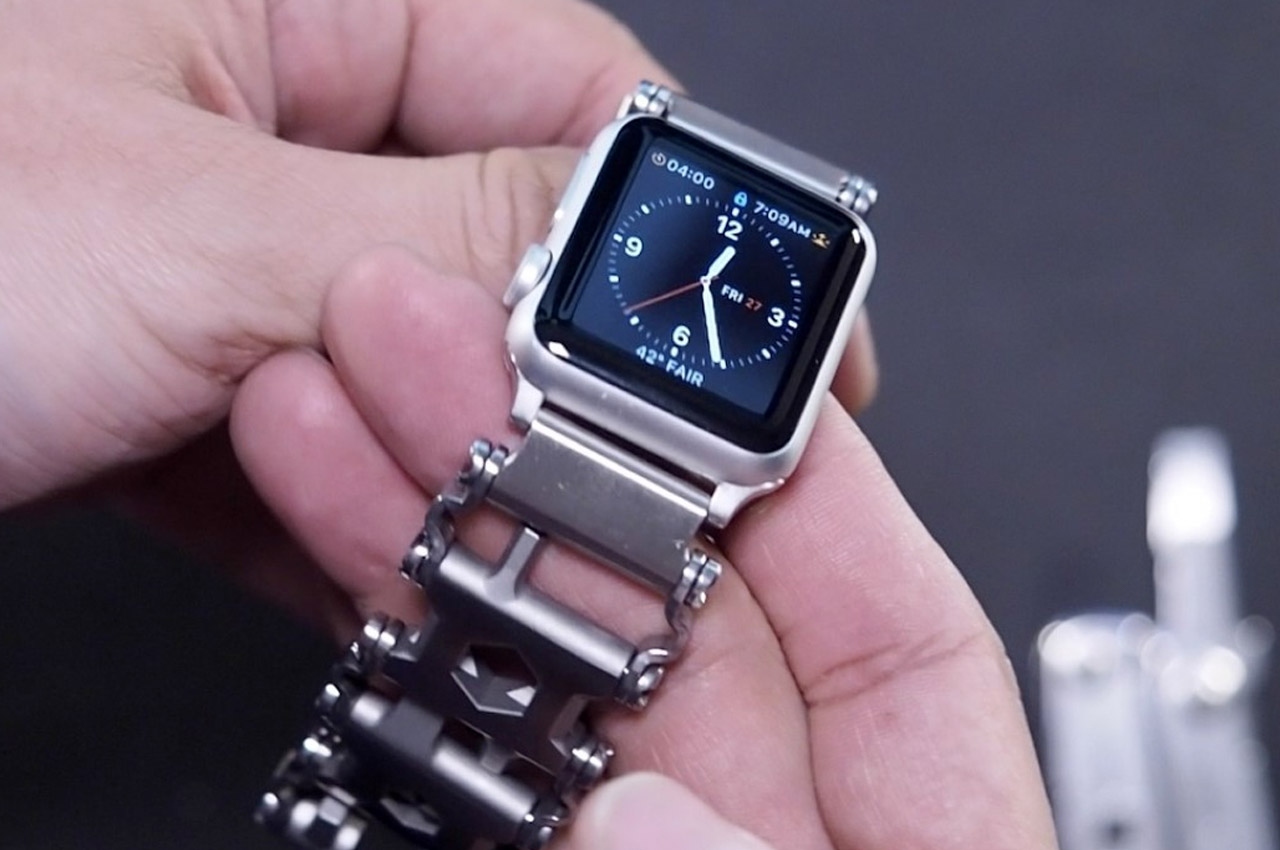 This handy bracelet + attachment turns your watch strap into an EDC utility belt with 29 different tools! The magic lies in two parts – the existing Leatherman Tread Bracelet, which packs 29 high-strength stainless-steel multitools in a portable, travel-friendly band that sits along your wrist… and the adapter, which turns the bracelet into a strap that attaches to your Apple Watch (or any other smartwatch). The bracelet’s individual links hold as many as 3 tools per module, from flathead screwdrivers to Phillips head screwdrivers, a wide range of hex drivers, and even an oxygen tank wrench. Made in Portland, Oregon, the Leatherman Tread Bracelet brilliantly turns EDC into something absolutely new, allowing you to wear it along your wrist as almost a fashion accessory… and the bracelet’s designed to last too, with a whopping 25-year warranty. 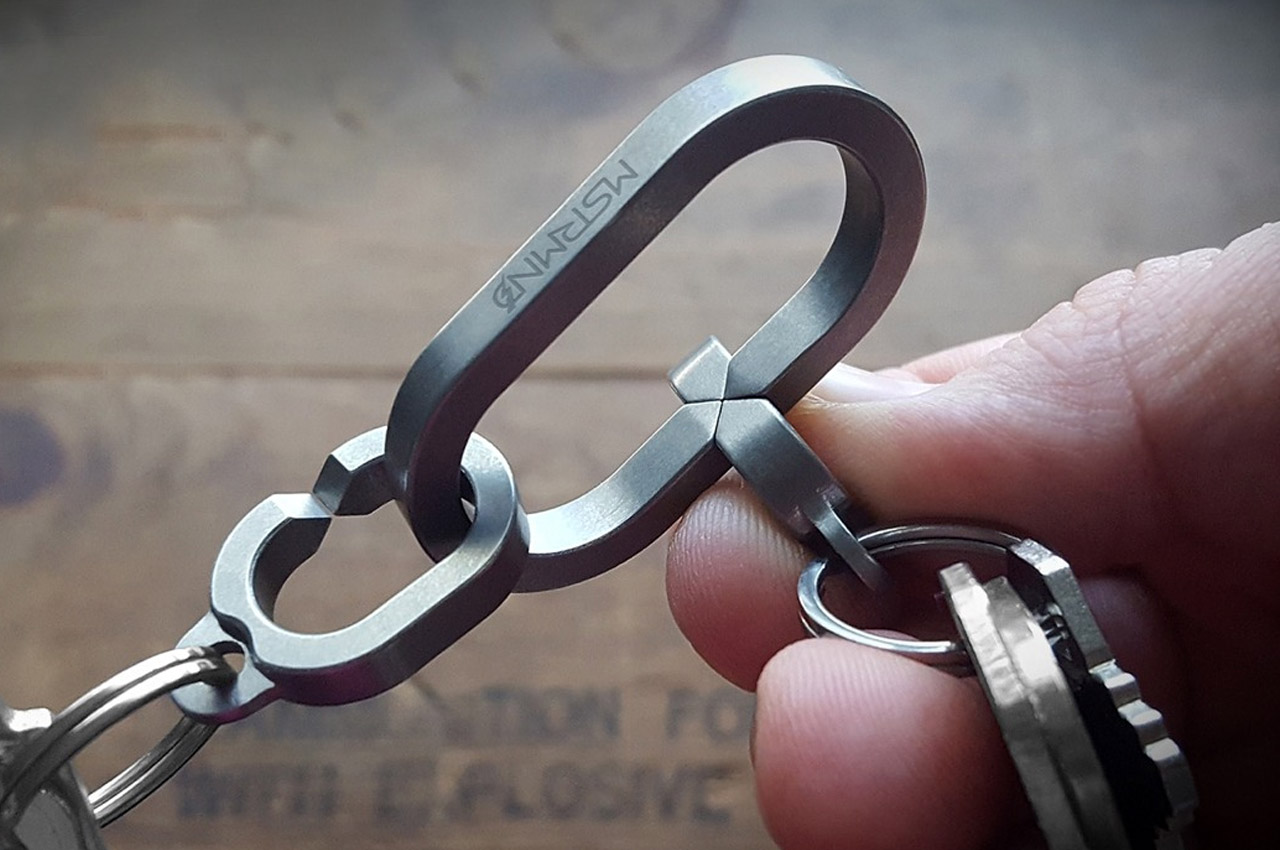 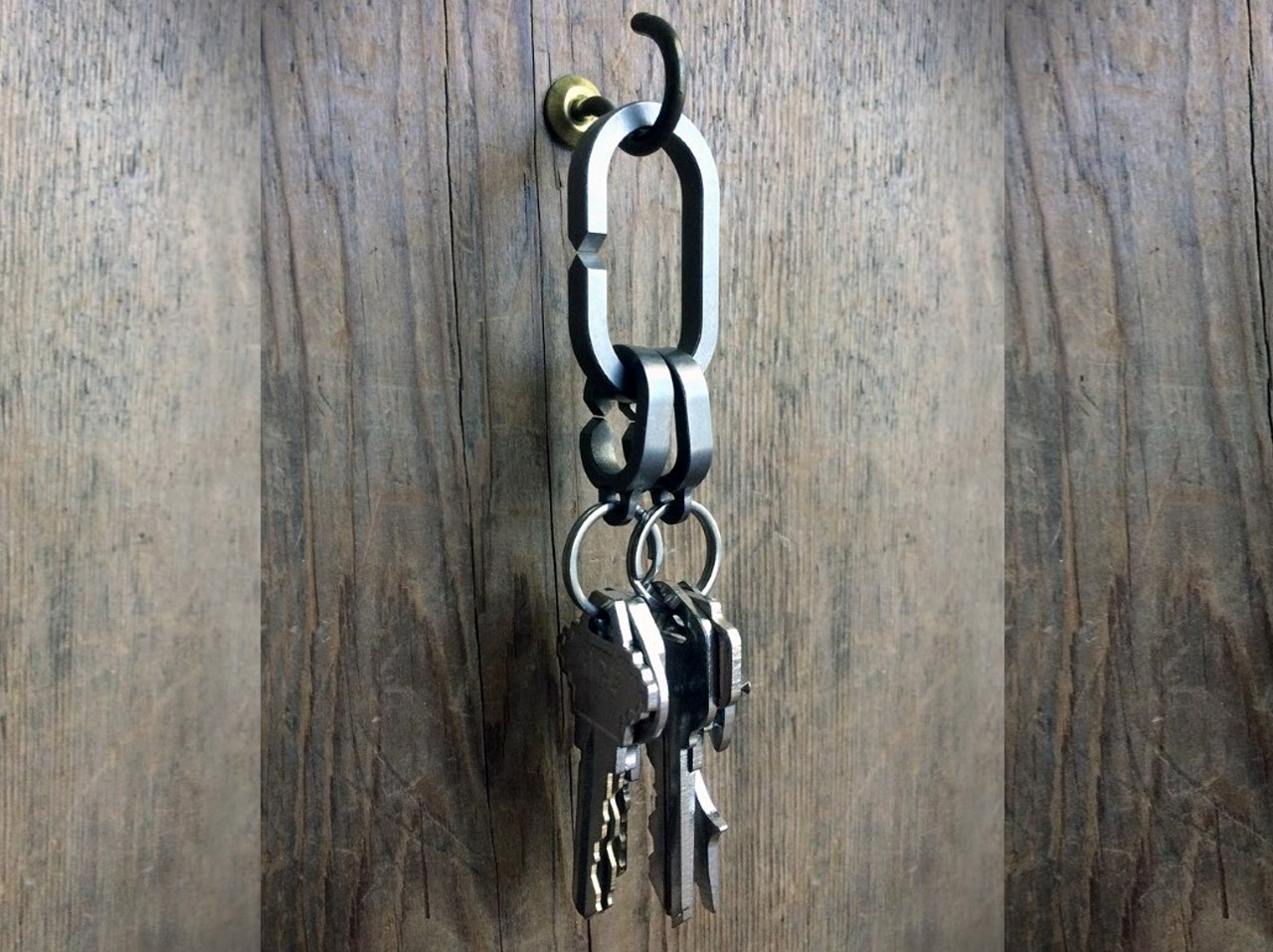 MSTR’s Linx ensures that interchanging keys between keychains will never be a headache again. Linx’s rather creative key-swapping approach isn’t time-consuming, requiring you to slide out a key by wedging your thumbnail into the keyring and rotating the key for minutes before it comes out, only to repeat the process, in reverse, for putting the key back in. Relying on a system that uses positive and negative shapes (think: jigsaw puzzle, or key and keyhole), Linx allows you to simply slide the keyring in and out of its holder by matching shapes (seen below), and sliding the keyring in or out in a manner that’s just extremely soothing to look at! 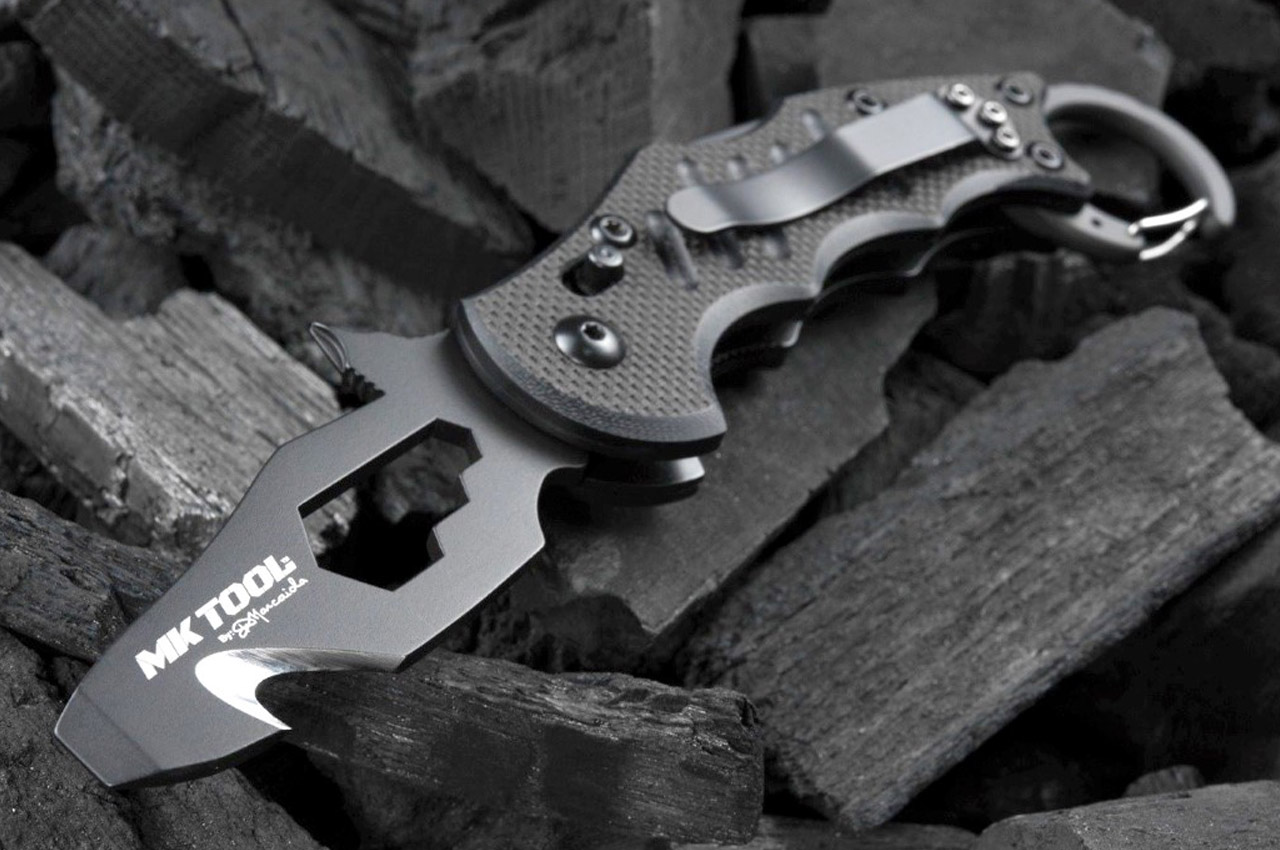 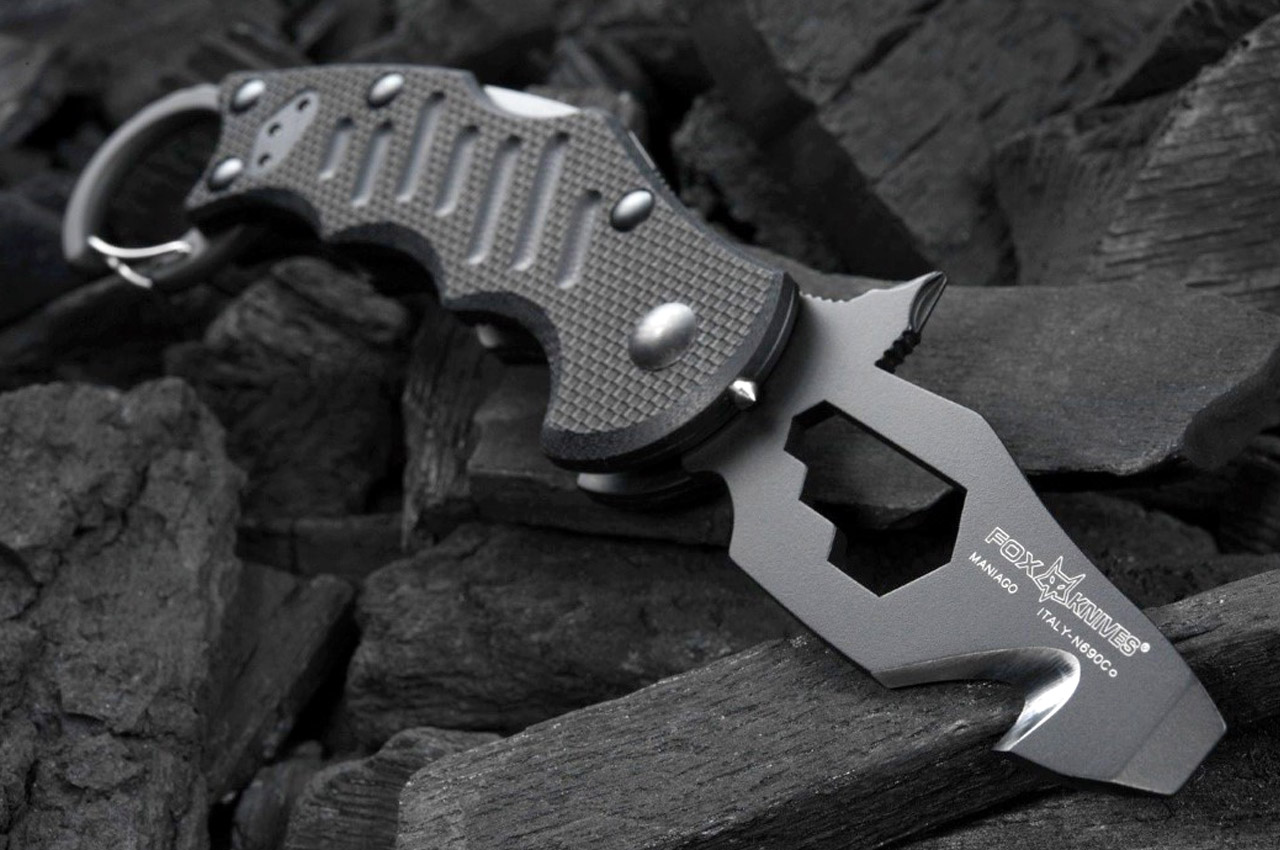 Meet the FX-800 MK, a folding karambit knife designed by Doug Marcaida for Fox Knives. Unlike traditional knives with sharp blades, the FX-800 MK’s blade is both sharp AND versatile. It comes with its own 3-size hex-tool, seatbelt-cutter, a flathead screwdriver, and a Phillips head screwdriver built into the blade’s real estate, making it much more functional than a cutting tool. The blade folds into the karambit’s handle, which comes with a carbide glass-smasher, along with a pocket clip and a carabiner clip. This propels the knife into a multitool category and allows it to have all these features coexist within its slim, knife-like design without any compromise… 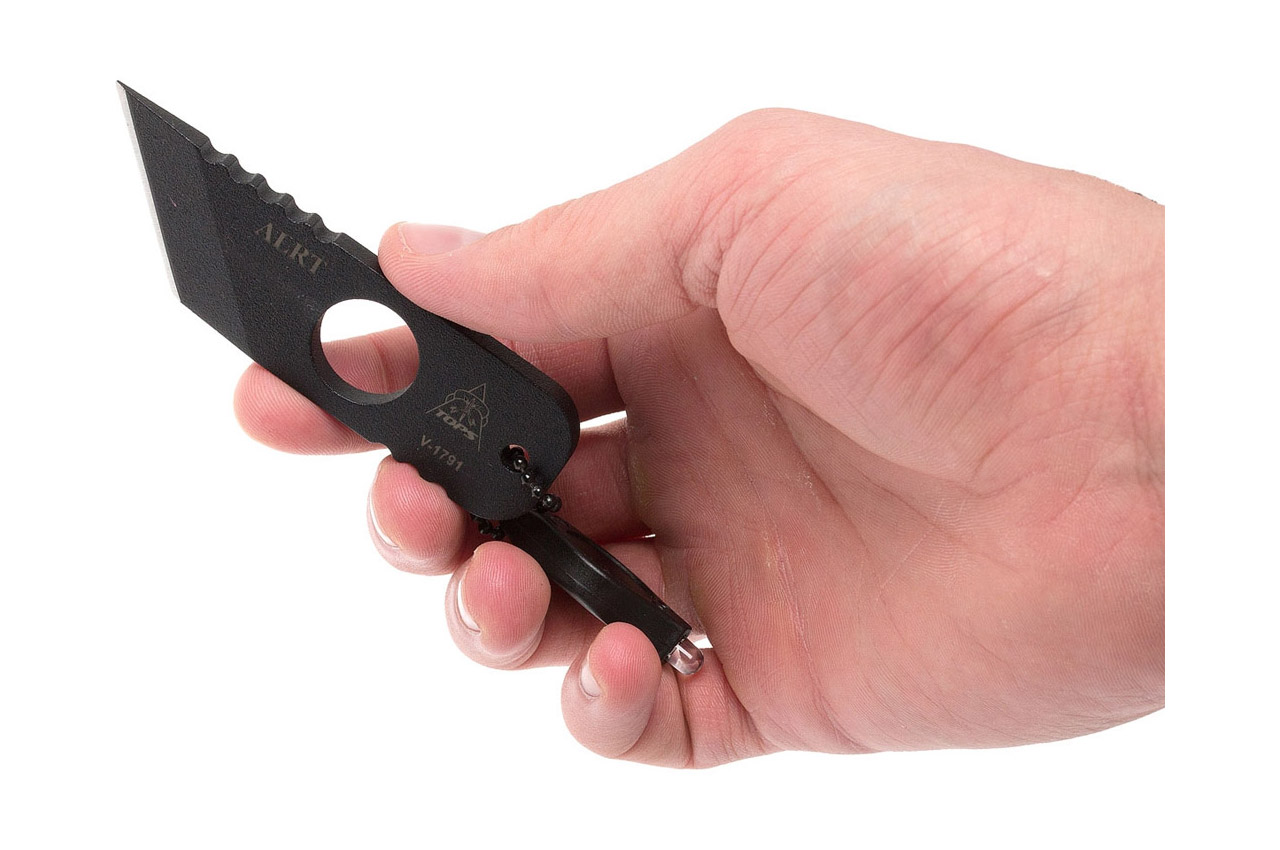 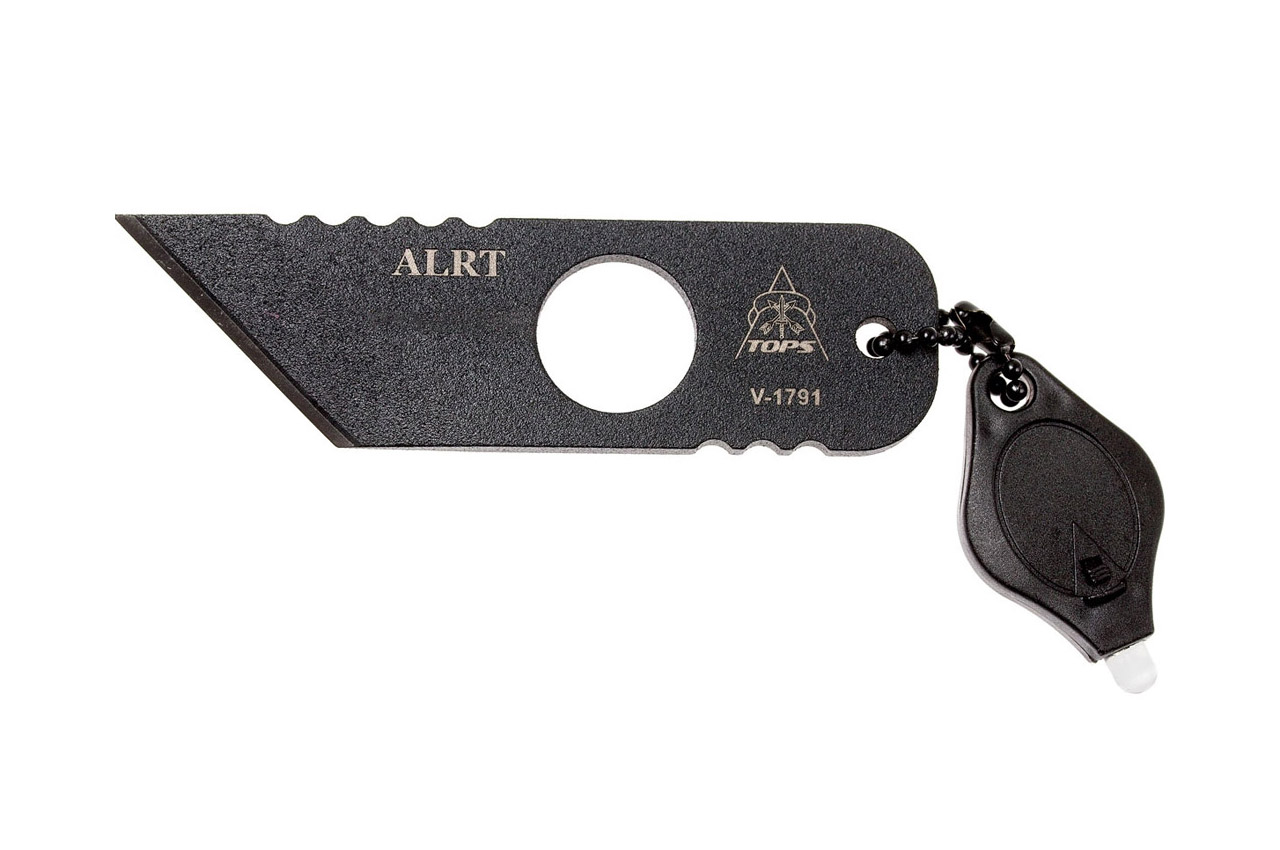 Meet the TOPS ALRT 01, a.k.a. The Anywhere Last Resort Tool which is a reliable EDC for anything from self-defense to conquering irks that come up every now and then. The EDC maker has crafted the tactical knife to be a surprise self-protection tool and a utility knife that’ll never let your down. It can be worn as a neck knife, keychain, or hung around the car’s steering column for iffy situations. The small knife has a hollow in middle to act as a grip for holding while also shedding the extra weight to keep it feather-light. Grip serrations, known as jimping, are there to provide extra grip – which is great. This in a way reminds me of the Japanese Kiridashi – thus I can bank on the woodworking and bamboo crafting abilities of the ALRT 01. 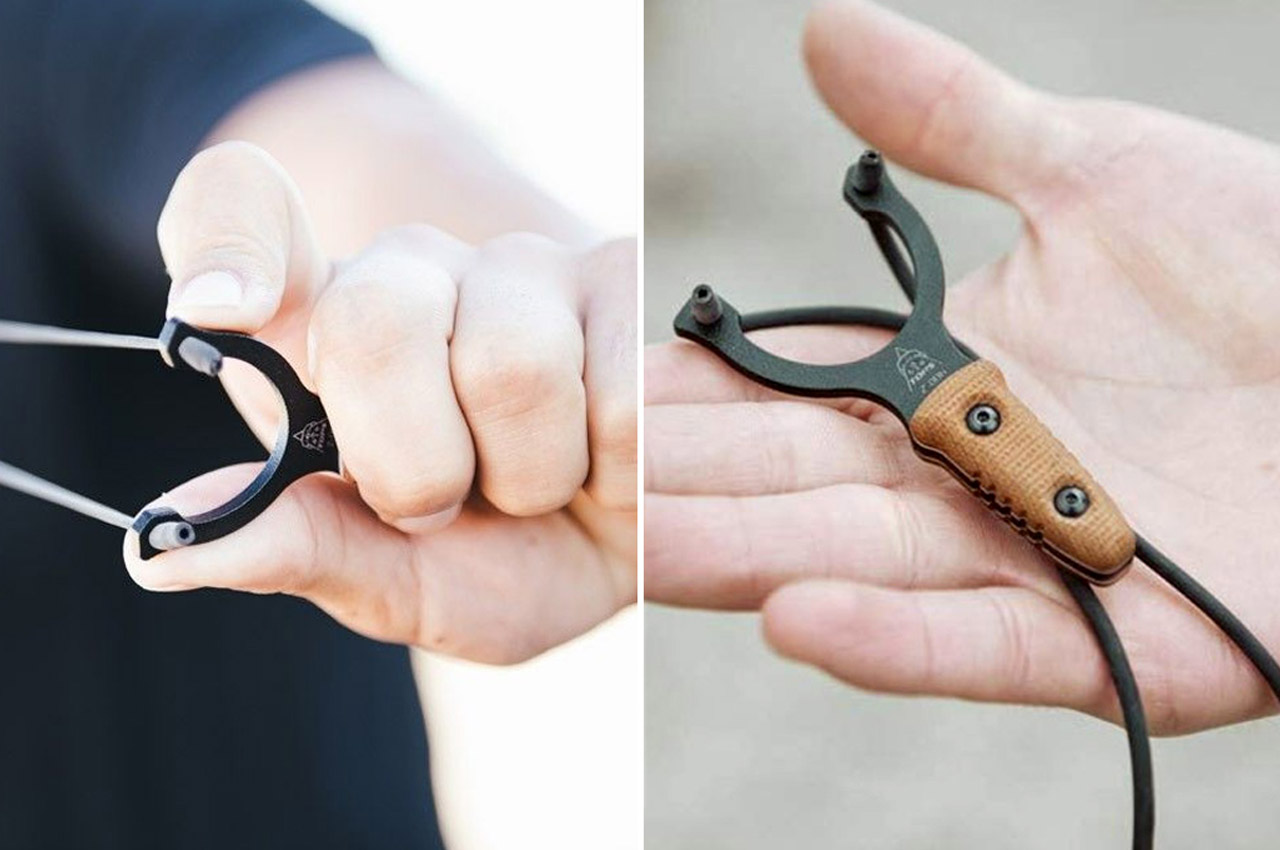 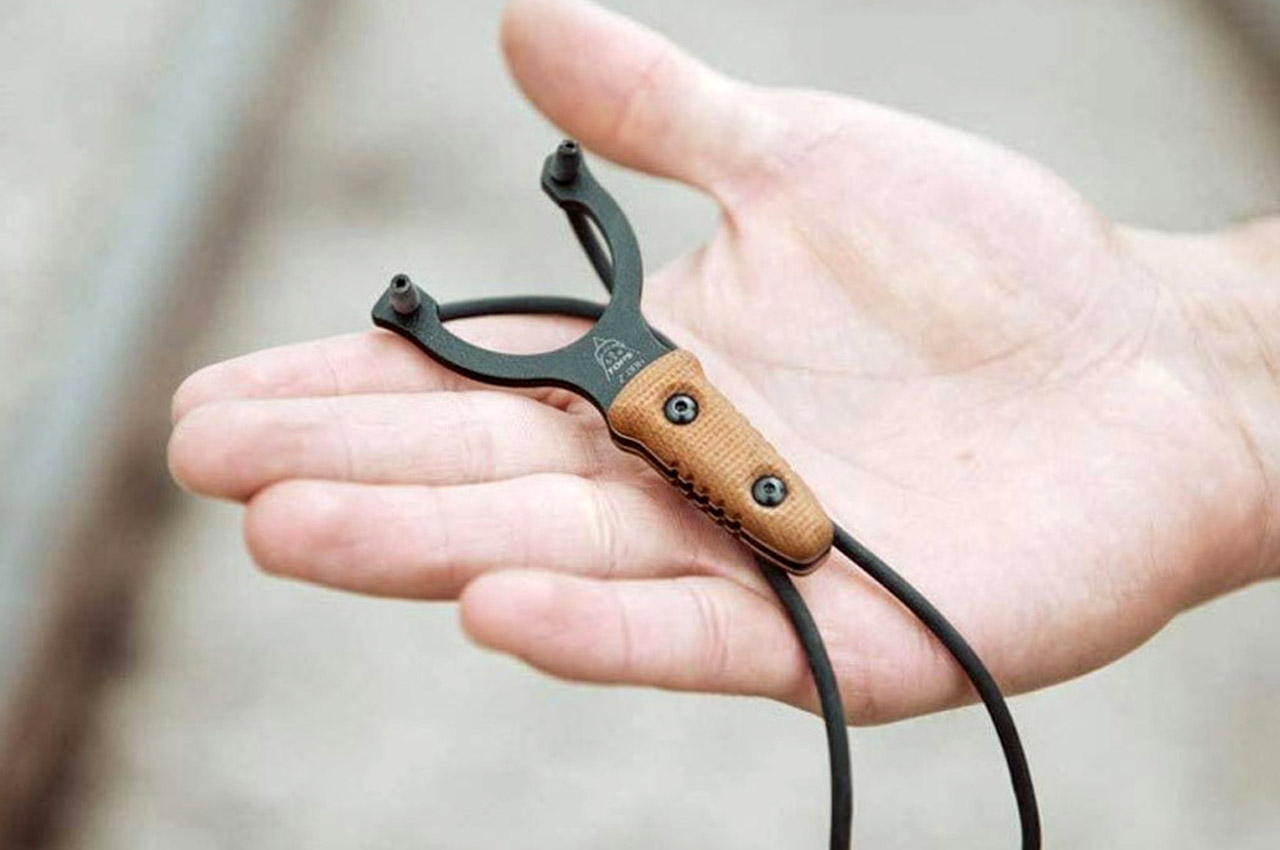 Meet the Mini Sling by knife manufacturing expert TOPS Knives. Reimagining the slingshot design that’s not seen much of an evolution, this little slingshot is a unique EDC accessory for the adventure stricken. The tiny slingshot can be put to several uses depending on what the occasion demands. You could use it to shoot a squirrel in the wild for food, deter any unwanted attackers on the prowl on a dark street, or simply line up cans to shoot them down as a pass time in the current pandemic-affected age. The sling is ultra-lightweight, weighing in at 3.2 ounces and no bigger than a compact EDC, perfectly fitting in the palm of your hand. Mini Sling comes with a brown leather sheath (attached either vertically or horizontally) for easy-to-carry aesthetics – it’s so tiny you won’t even notice it’s there. You can carry it in your pant pocket or backpack too, without any hassles. 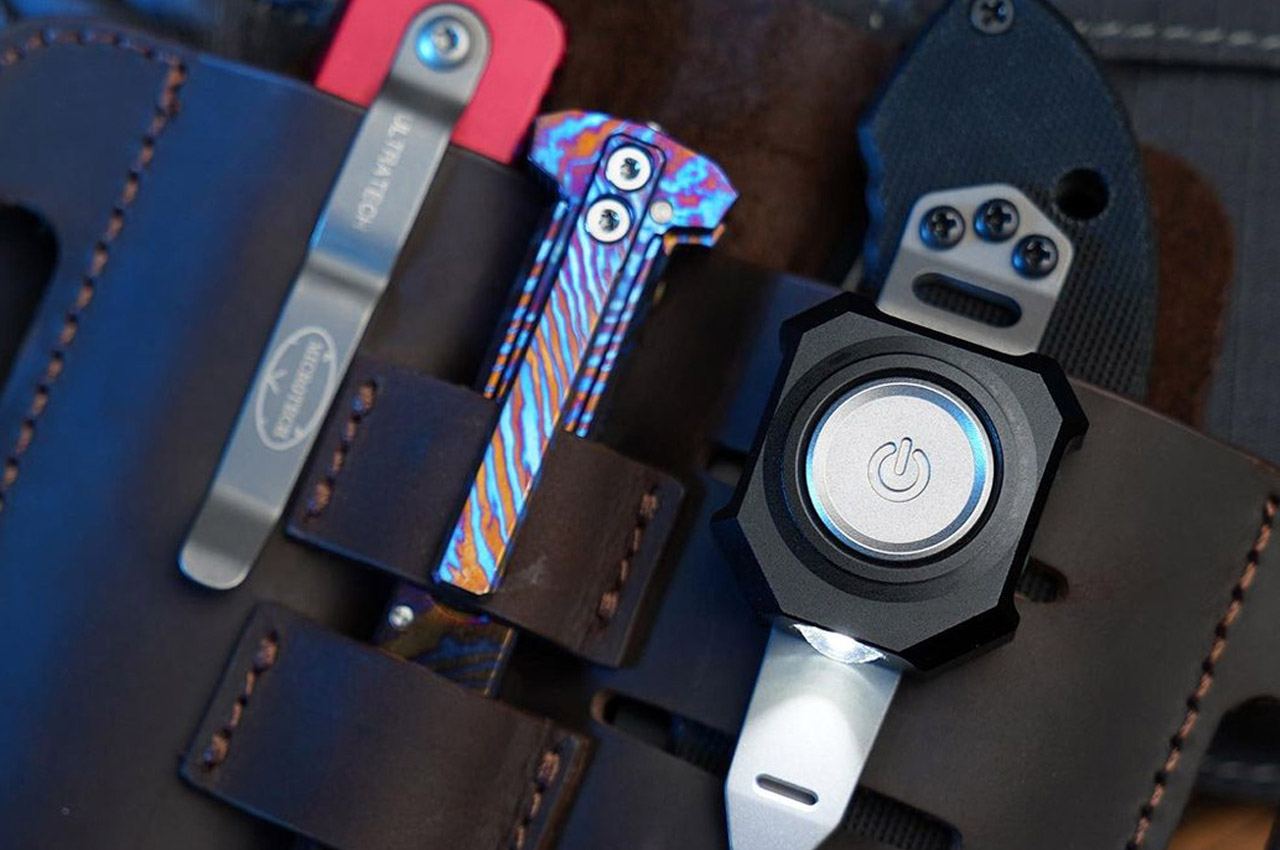 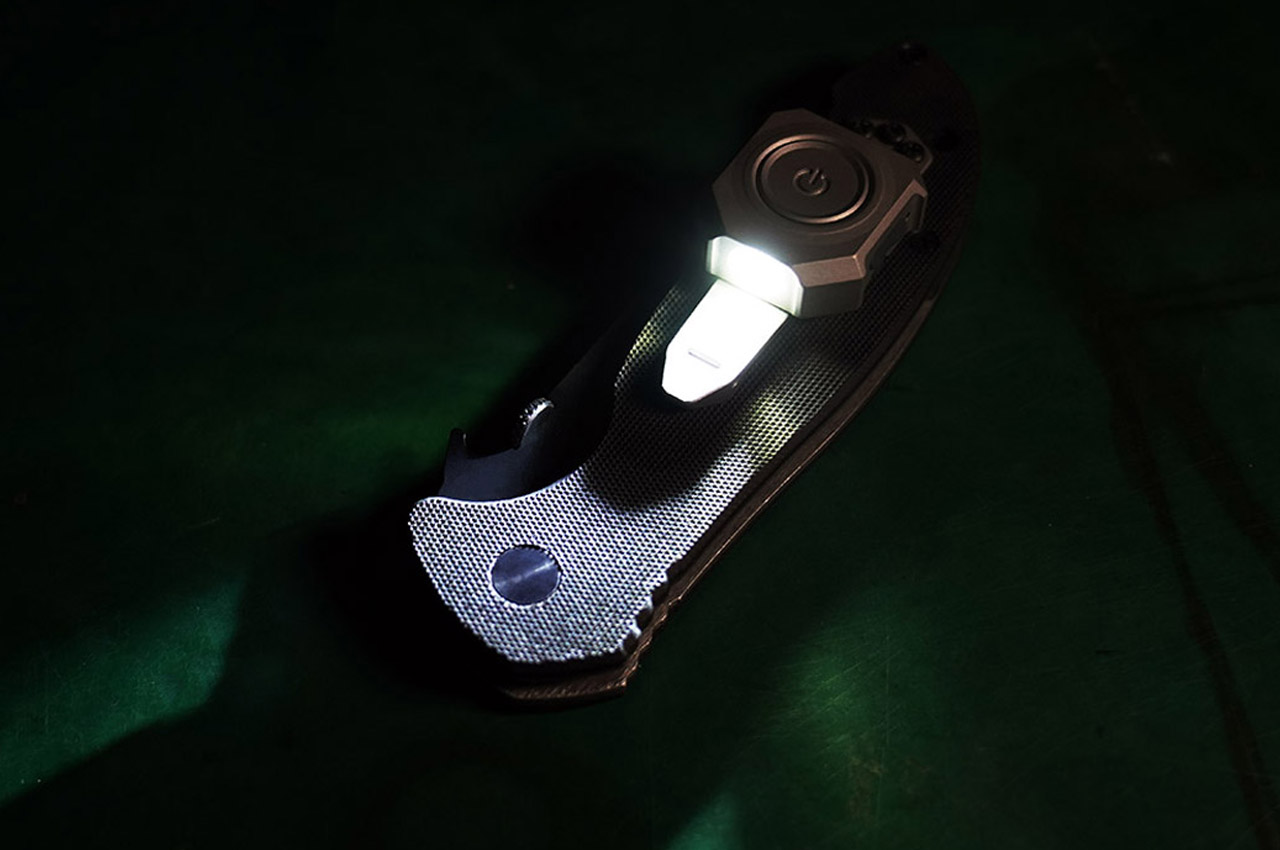 IPX6 rated CPL3 LED mini-light is the simplest yet most useful tool made out of TC4 Titanium using CNC precision machining technique. The mini LED light is capable of lighting up anything at a distance of 31 meters and has a maximum output of 300 lumens. The LED comes in five different modes – the 4-lumen Low being the most economically lasting for up to 7 hours on one full charge. The accessory weighs a mere ounce – making it a perfect fit for all your adventures or unpredictable everyday needs. The 55mAh lithium polymer battery charges in an hours’ time via a USB-C port, all set for your life’s tasks. 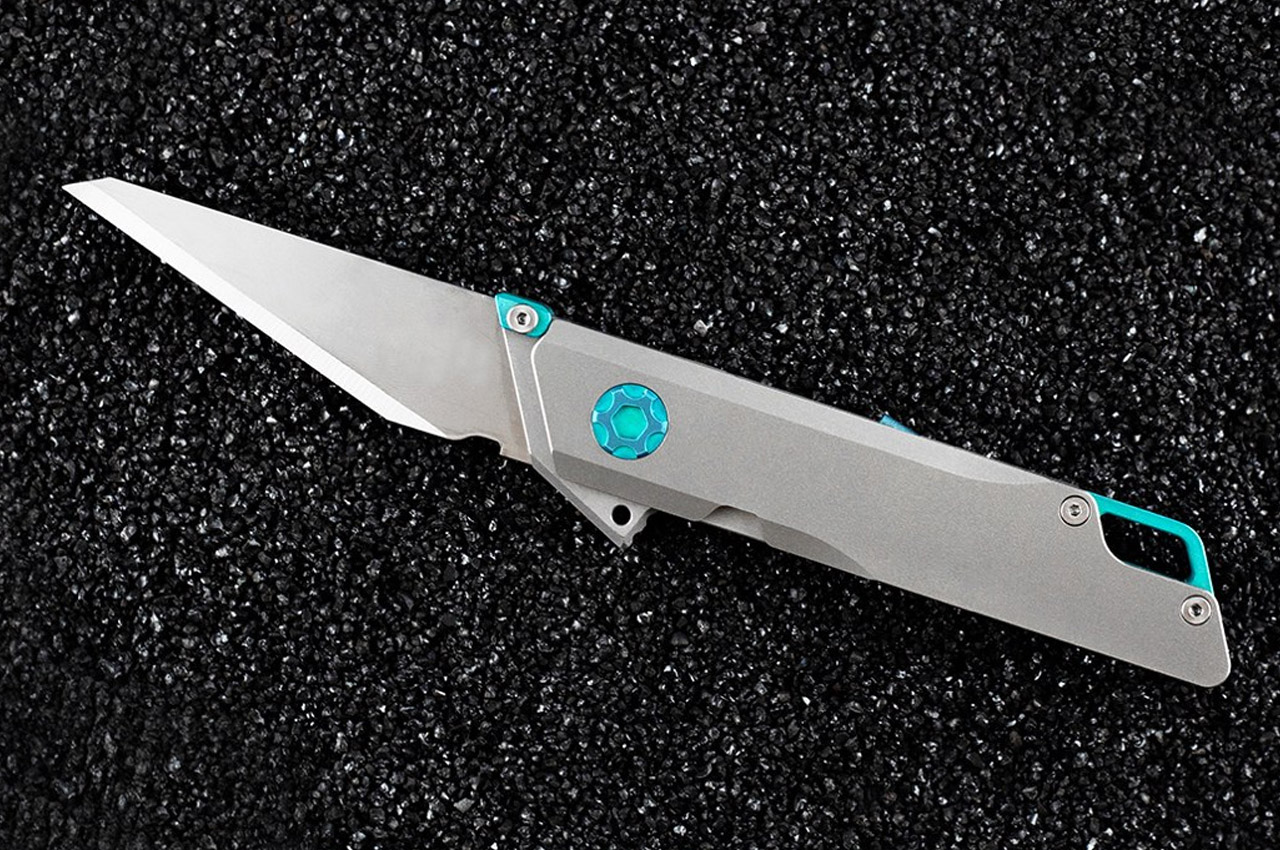 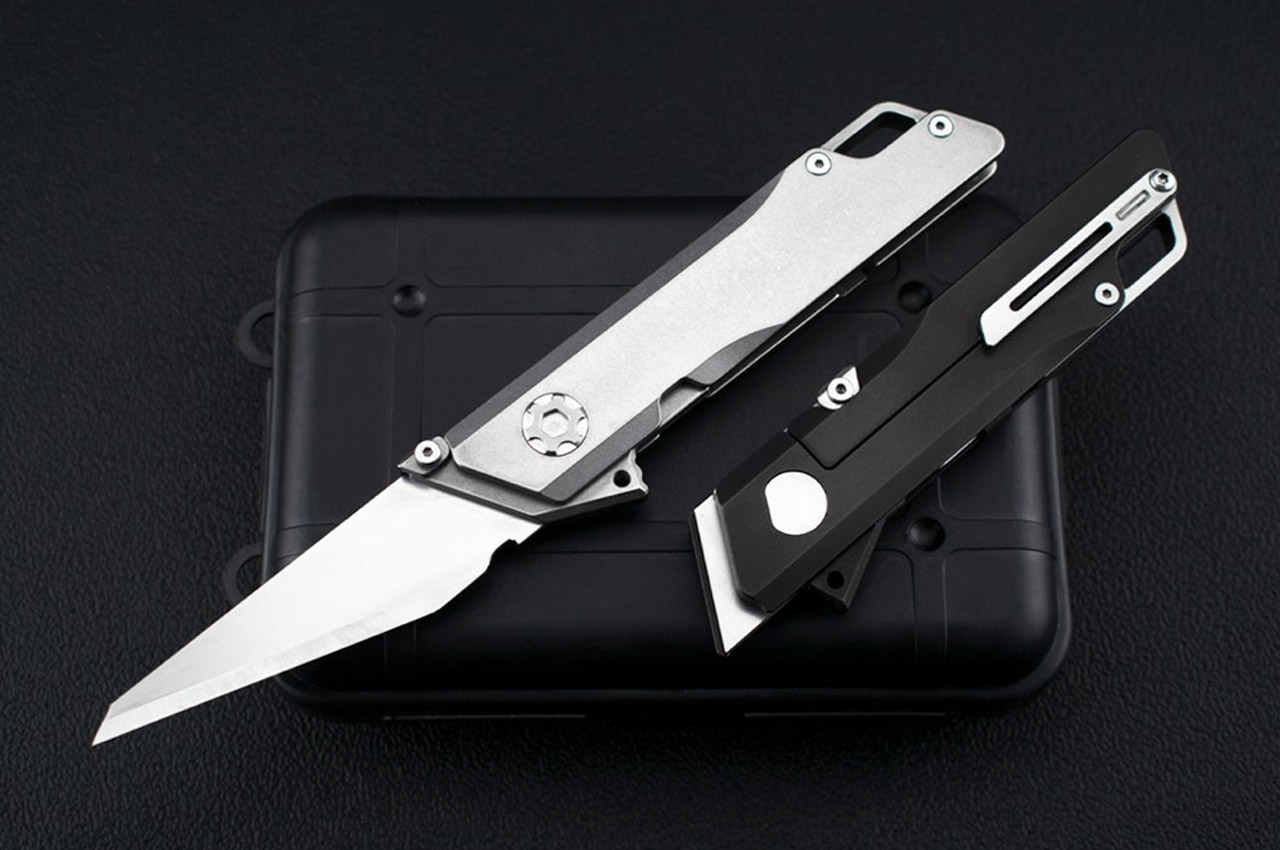 With a titanium body and an easily replaceable blade, the Raven Titanium Utility Knife is the kind of knife that’s designed to last way past your lifetime. The machined body comes with a quick-opening mechanism that can be operated with just one hand, and a safe-locking feature that holds the knife’s standard CKB-2 utility blade in place. The blade, which comes with a scalpel-style edge, does a great job of cutting, piercing, carving, and scraping, making it equally useful indoors, for opening boxes and cutting open packets, as well as outdoors, for more demanding scenarios like scraping flint, piercing ration-packets, or cutting paracords. Designed to be perfectly handy, the blade folds inwards when not required, fitting into Raven’s perfectly sized body that’s handy, pocket-friendly, and even features a clip that you can use to secure your EDC to the lining of the pocket on your jeans, jacket, or backpack. 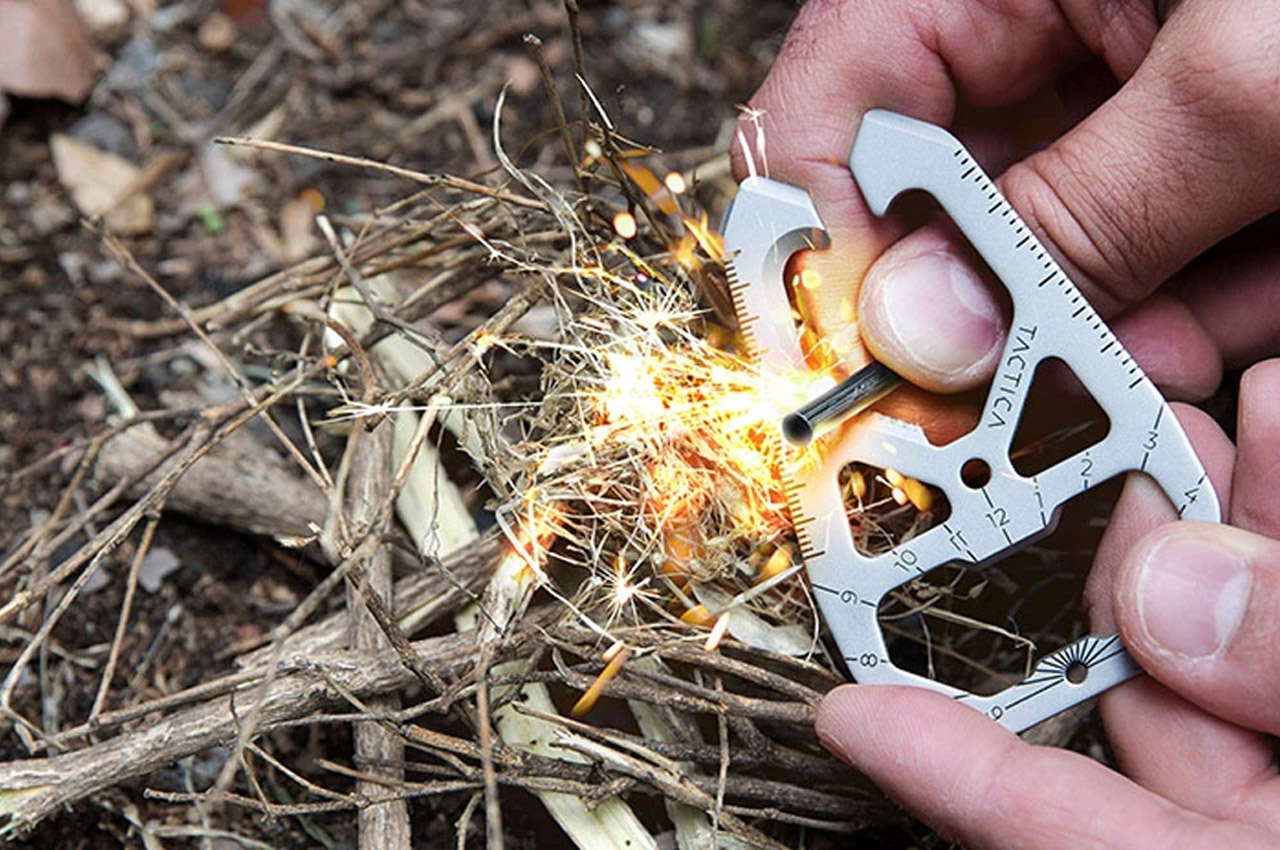 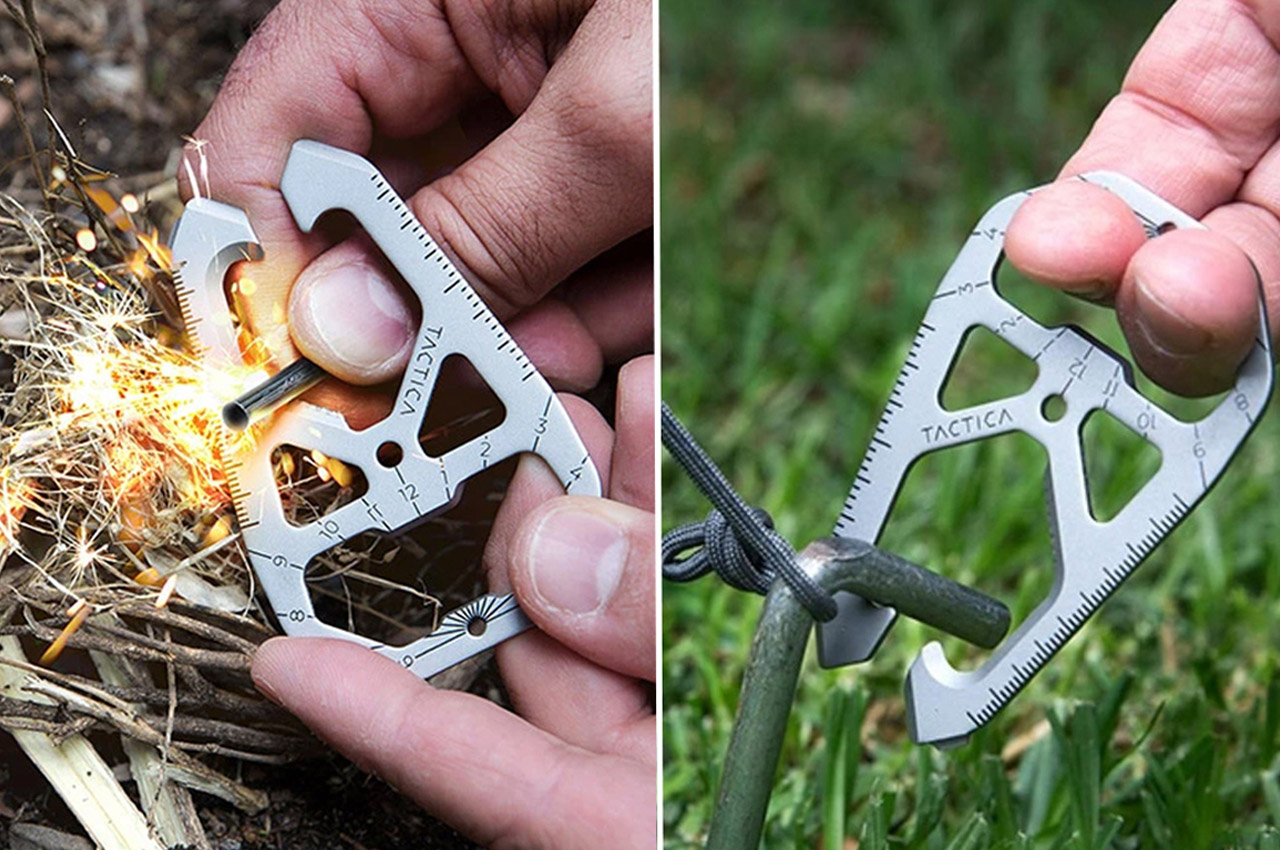 The TACTICA M.020 Camping Tool Card is the novelty you want to always have in your wallet for the multitude of uses it brings to the fore. Ideal for adventure seekers who want to carry as little gear as possible, the multitool has a surprisingly great combo of minimal size (about that of a credit card) and more than 15 functions that come really handy for people who hike, camp, or go for an unexpected adventure quite often. TACTICA M.020 is made from a single piece of super-tough Grade-5 titanium or 420 stainless steel (depending on the one you choose). Well suited for any tasks at home or in the outdoors this tool includes functions like – a sundial, screwdriver, rope tensioner with finger pulls, saw blade for cutting, pry bar, metric ruler for measuring, fire starter courtesy the removable ferrocerium striker rod, tent peg puller for camping in a jiffy, can opener for home use, and bottle opener for times when you desperately need one!

Apple Ancestry! This Apple Watch stand makes it look like an iPod Classic!

Designed as a pretty nifty throwback to Apple’s golden era of the iPod, Elago’s W6 stand is a perfect tribute to one of Apple’s most…

An Efficient, Safe and Practical Alternative to Woodburning Stoves

The burning of solid fuels such as wood, charcoal and crop residue for indoor cooking is unfortunately still commonplace in third world countries; the pollutants…