There’s something about triangles that just makes them seem so trustworthy and sturdy! According to me, they’re the most resilient polygon out there. Comprising of three sides, that steadily support and reinforce one another, the triangle functions as a strong base, and can provide unwavering support. Hence, making the shape an ideal choice in the field of architecture. Triangular architecture is gaining immense popularity. From modular treehouses with triangular pitched roofs to triangular tiny homes – this shape is making waves in the architecture industry! And, we’ve curated some of the very best designs for you. Enjoy! 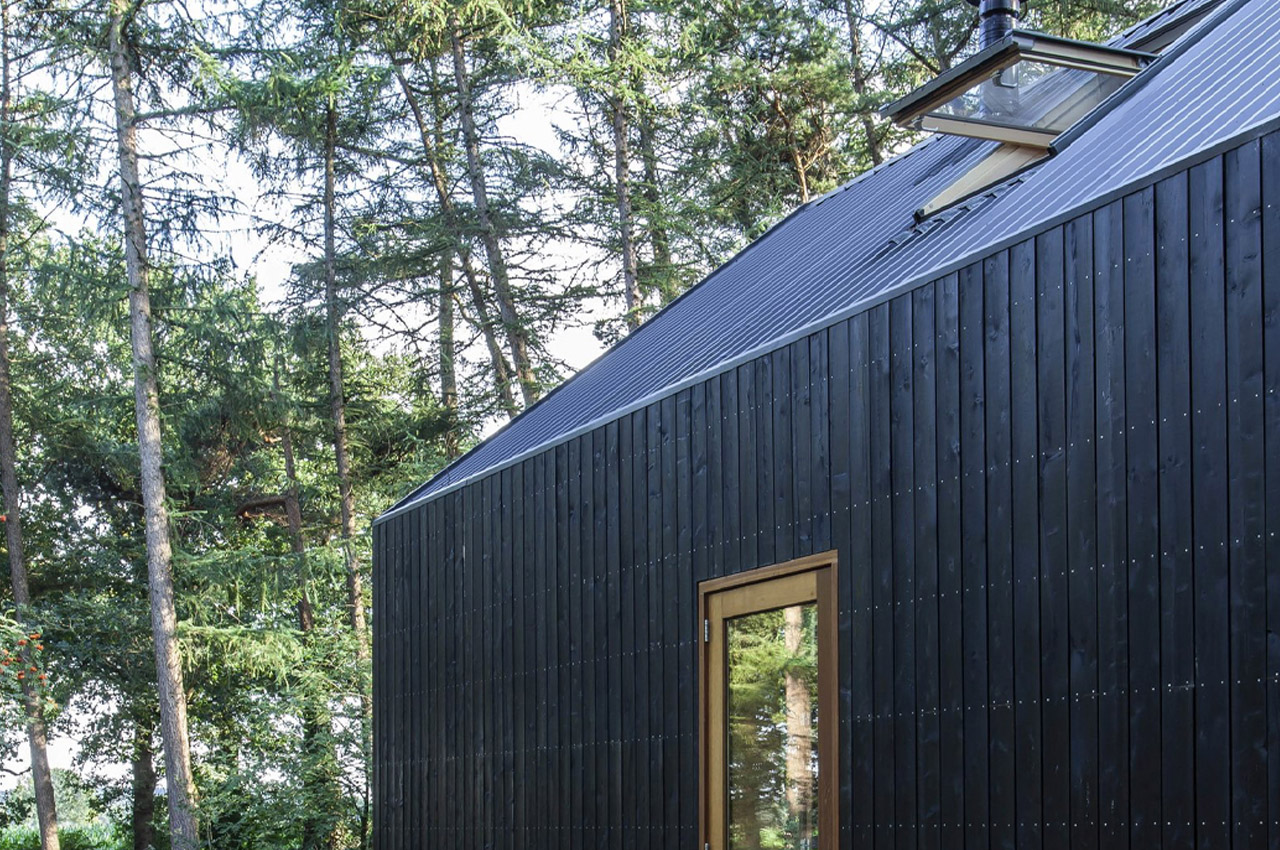 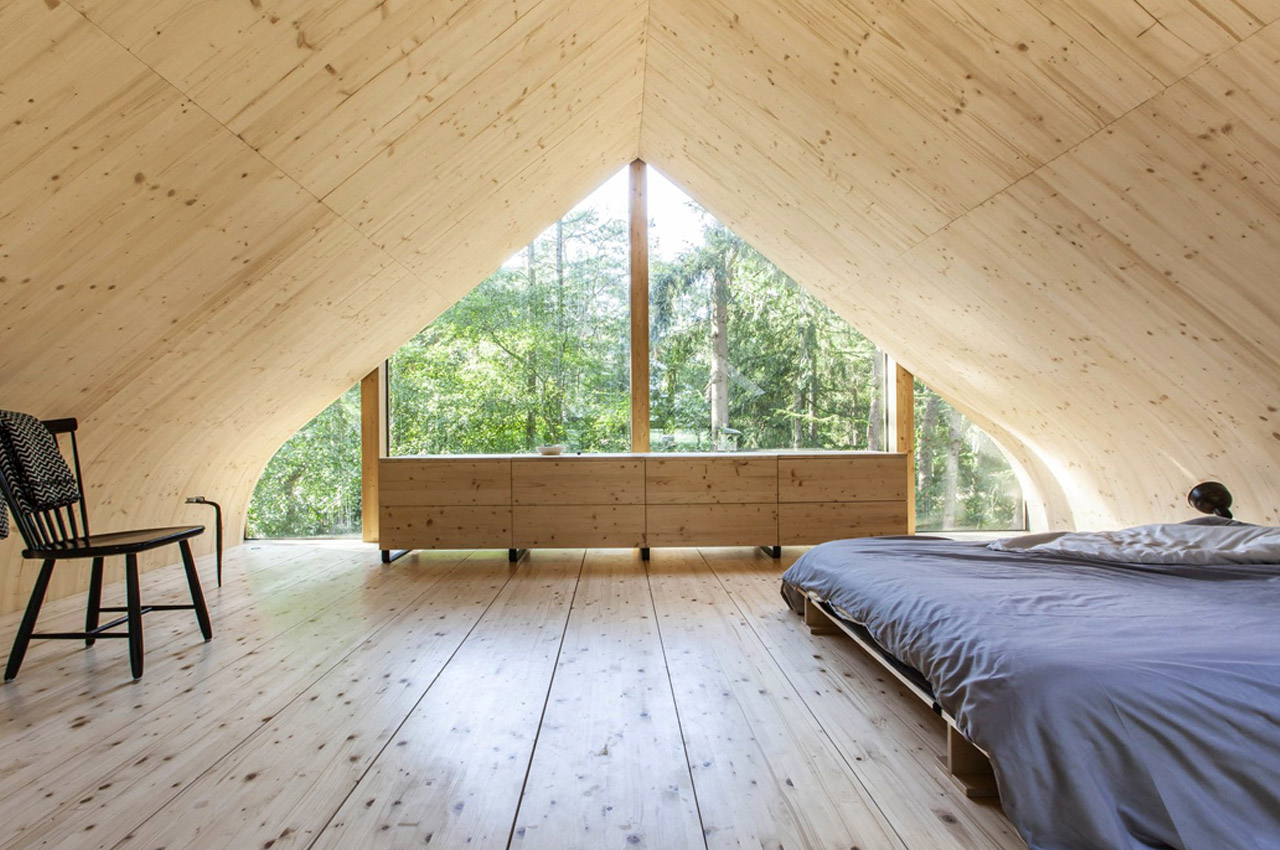 Woonpioniers, an Amsterdam-based architecture, and design studio has created Indigo, a modular building system that designs homes to replicate one of your dreams. Depending on the home you’d like to build with Woonpioniers, Indigo’s structure and shape may vary. Recently, Lia Harmsen collaborated with Woonpioniers to design her live-in workspace for sculpting. The finished custom two-floor home measures 861-square-feet and features fixed-end moment building practices that produce a beautiful, curved interior leading from the wall to the ceiling. The fixed-end moment frame of the home offers an open-air floor plan, giving complete access for the building’s interior layout to take shape, leaving behind the spatial restriction of support beams and partitions. 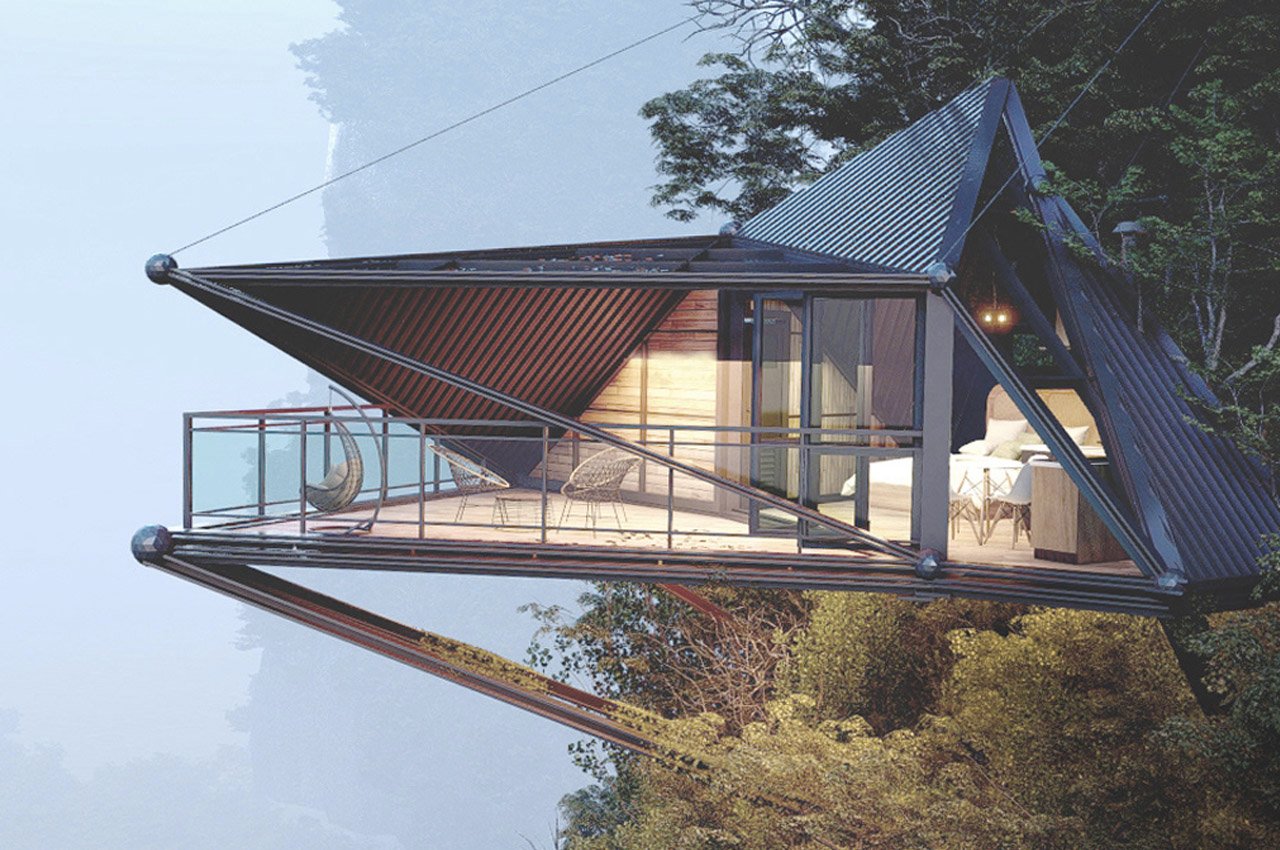 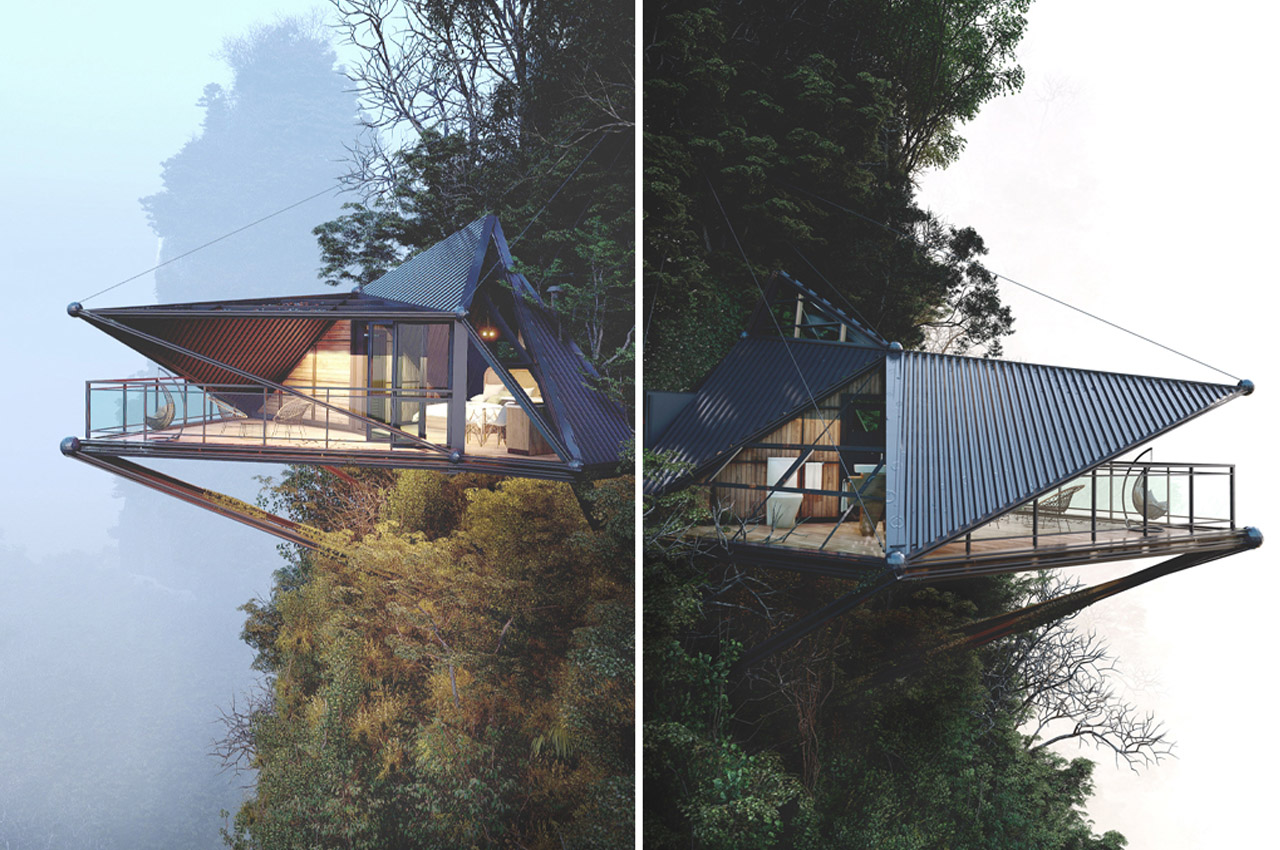 Liyanage’s Cliff Cabin, as he calls it, suspends from the side of a mountain, hovering in midair. In his 3D conceptualization, Liyanage visualizes Cliff Cabin locked in place above four support beams that are bored into the cliffside to create a secure enough foundation for Cliff Cabin to rest atop. In addition to its bottom support, four high-tensile cables are attached to the cabin’s roof and balance the cabin by drawing it back away from the cliff’s edge, evenly distributing the weight of the cabin. Globular spheres lock the cables in place and add an elegant and tidy touch to the cabin as a whole. Cliff Cabin takes on a primarily triangular shape, with right triangle glass facades sharpening the cabin’s sides and protruding out to their center of convergence. 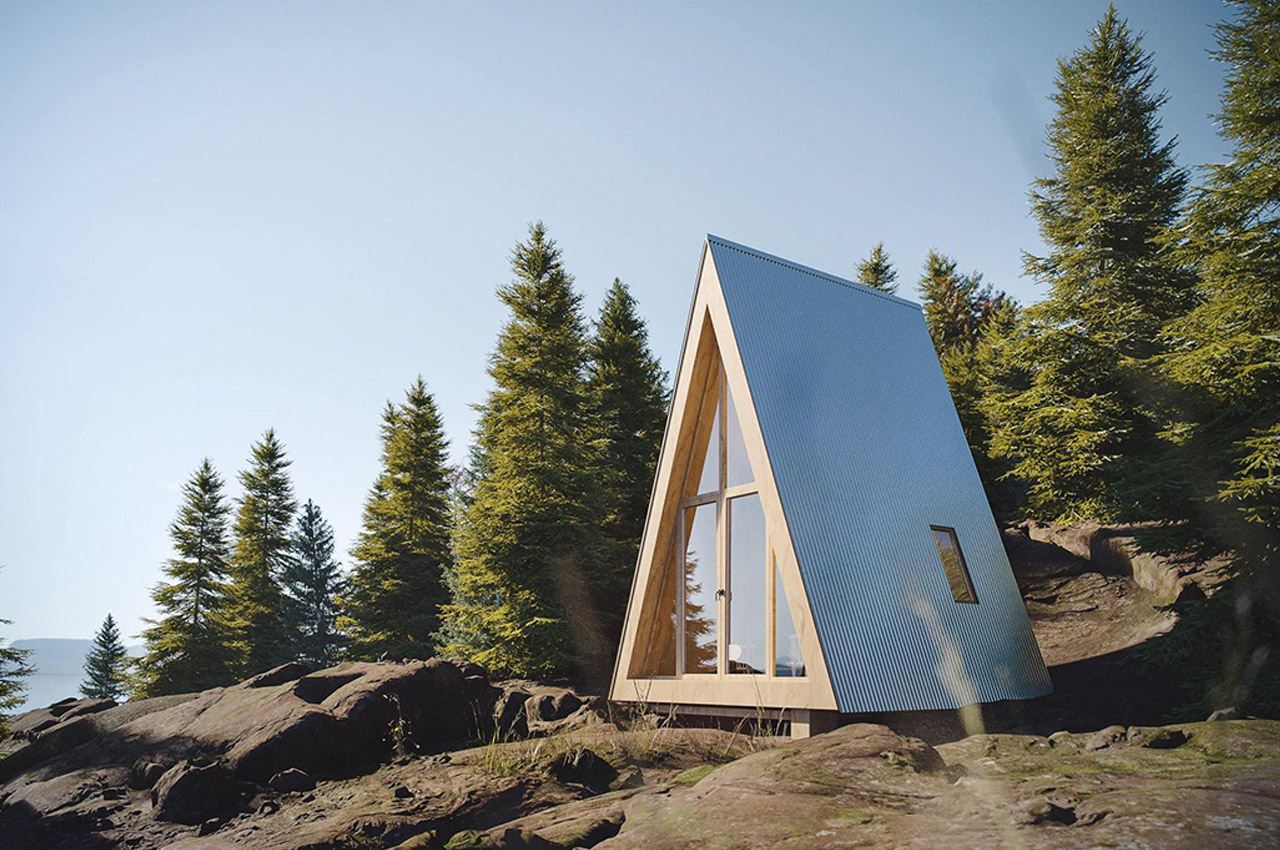 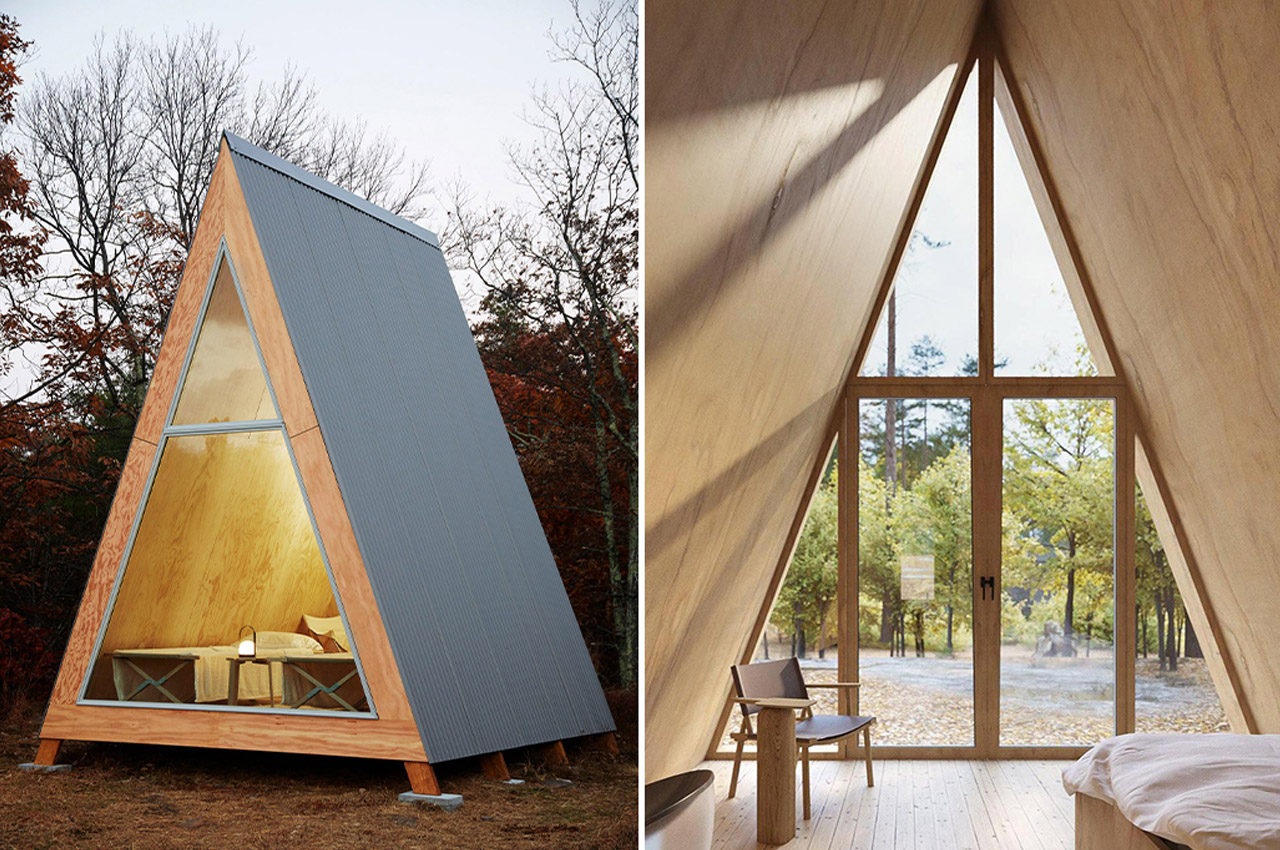 Setting up a minimal glamping cabin just got a whole lot easier thanks to Den! The cabin design studio has a range of flat-packed DIY-style kits that let you assemble your own A-frame cabin in a few days. The average size is 115-square-foot (10.68-square-meter) with models that are larger and smaller depending on what you are looking for. Once assembled, you can see the slanted wooden walls and a floor-to-ceiling triangular window just like how we drew a picture of a cabin as children. The space is minimal and can be transformed into a cozy getaway, a yoga studio, or a creative retreat! The prefab pieces for the cabin are made in New York and come with pre-drilled holes, all wooden structural parts that lock together, bolts, and even door hardware. They are super easy to assemble and the details make the cabin stand out from other flat-packed structures. 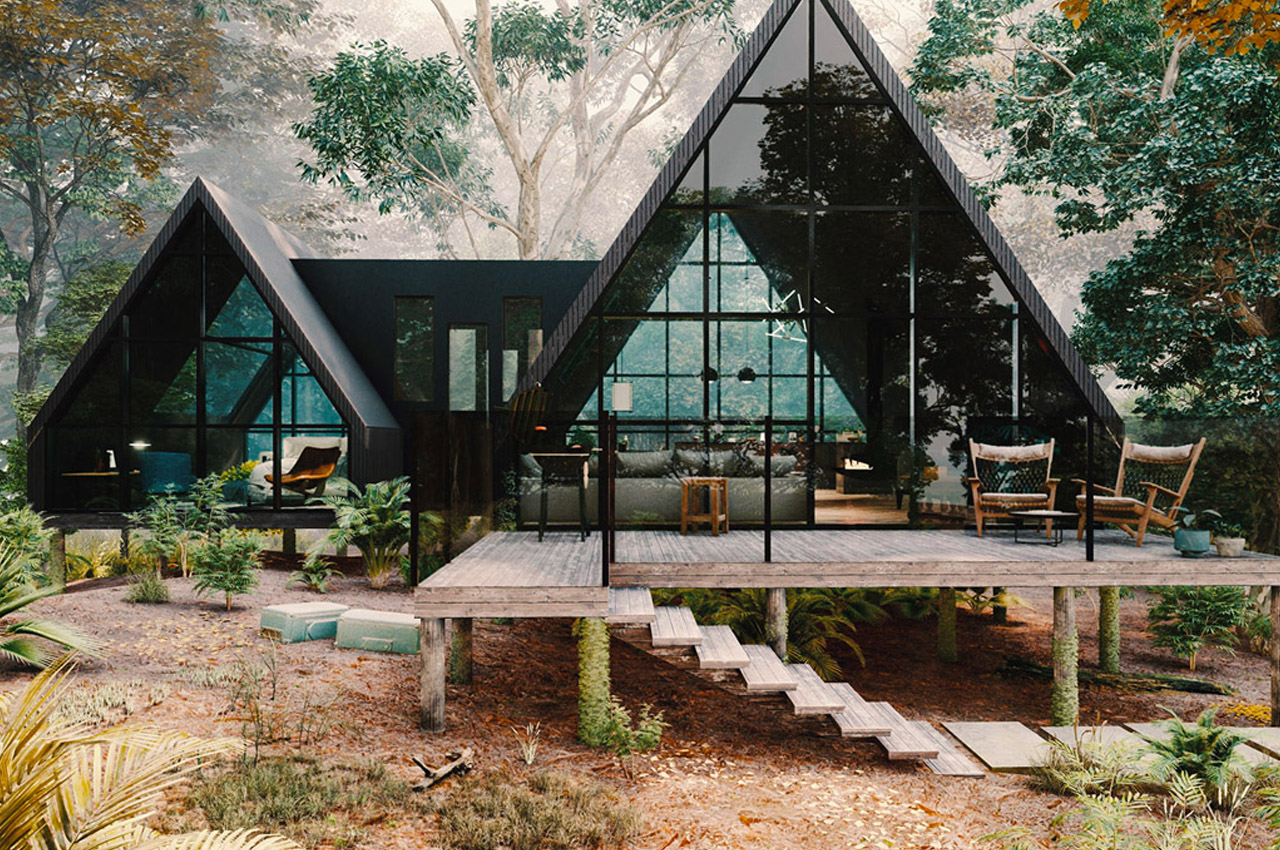 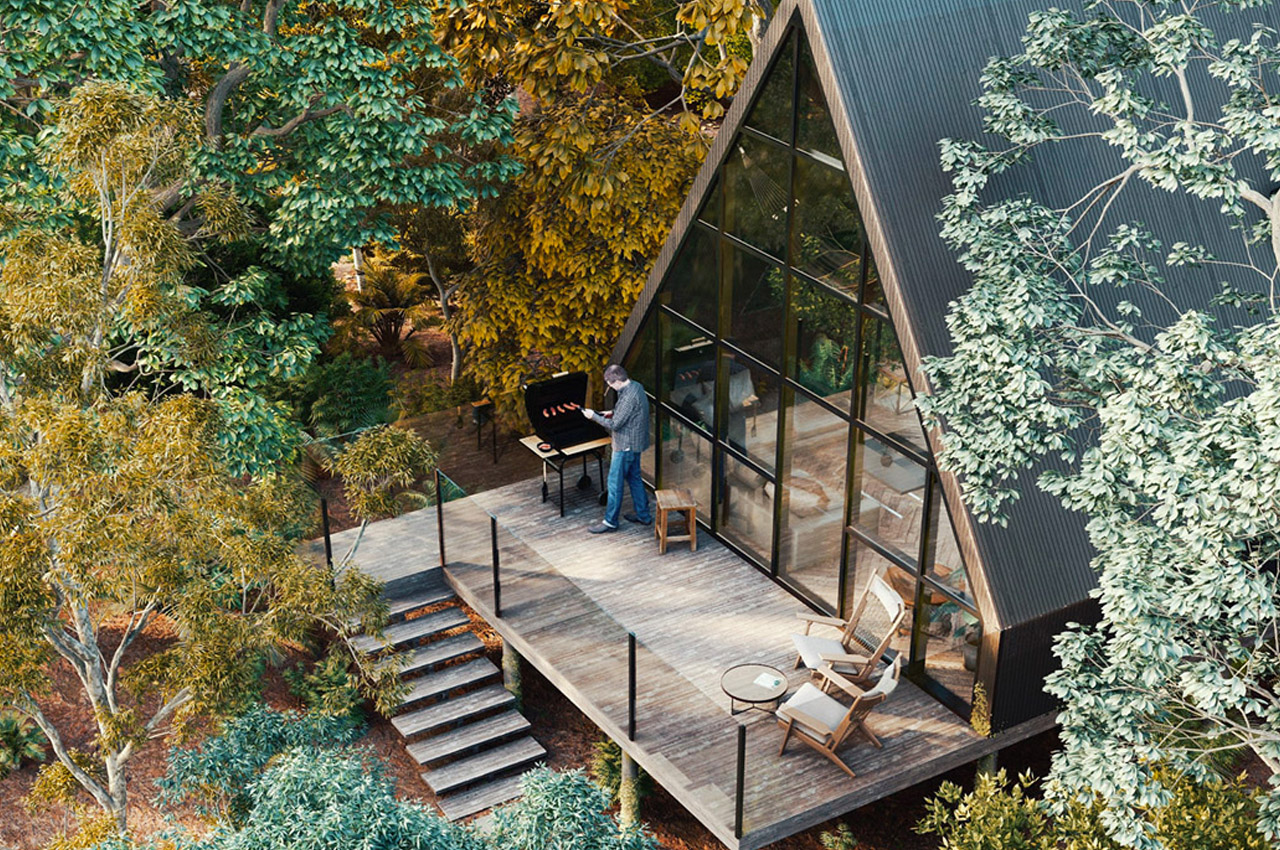 Modern, minimal, and clean, the Lima cabin boasts an A-frame structure, although it cannot be compared to the traditional A-frame cabins we are so used to. Exquisitely pleasing to the eyes, yet highly functional, the cabin features two main areas or spaces. The two pyramid-shaped structures (which almost look like mountains, as the cabin has been inspired by the surrounding mountains!) represent these two spaces, and they are connected by a corridor, creating an open and spacious holiday home, while efficiently utilizing the square footage of the space. The living room is a beautiful communal space, wherein the residents of the home can lounge about, interact and connect. The wooden kitchen counter and dining table serve as intimate meal spots, where you can share a meal with your family and friends, and nurture the shared holiday spirit. 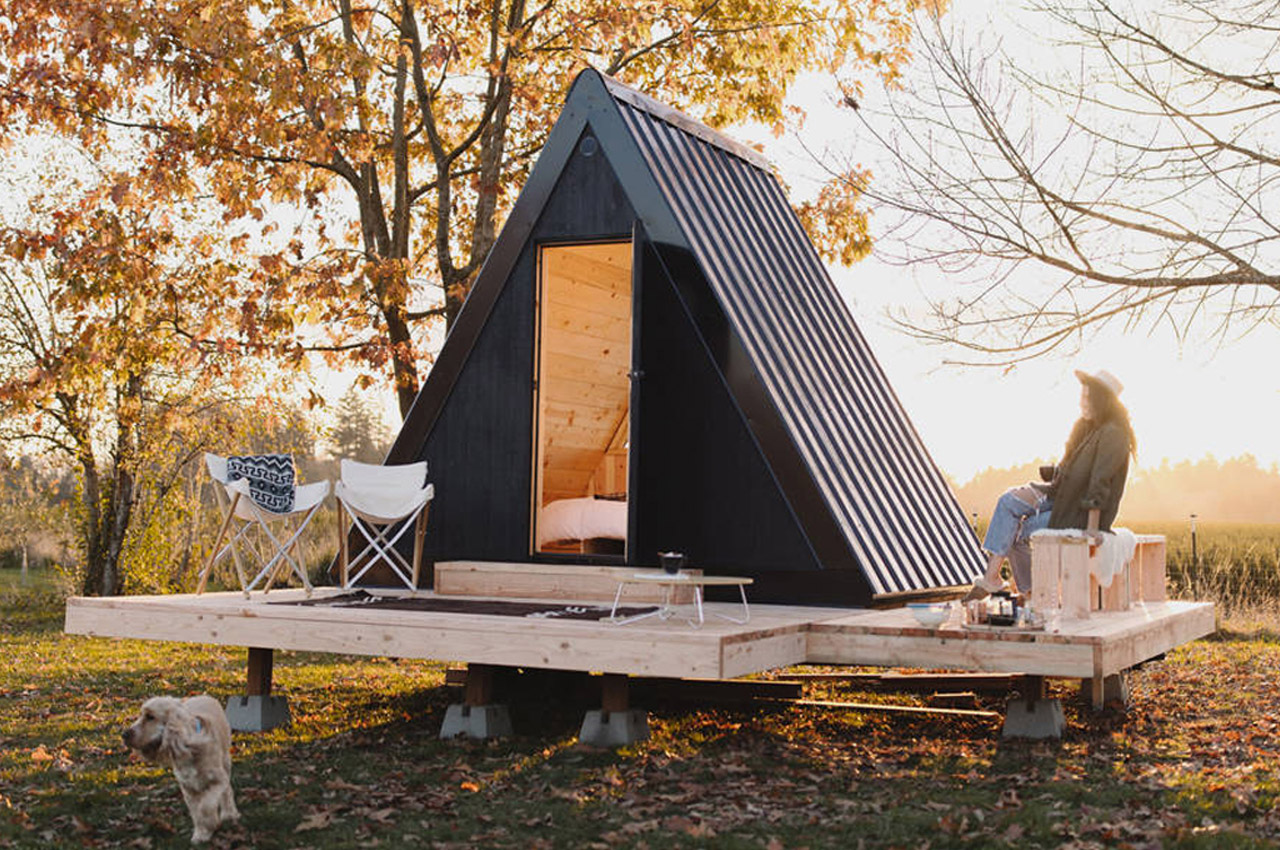 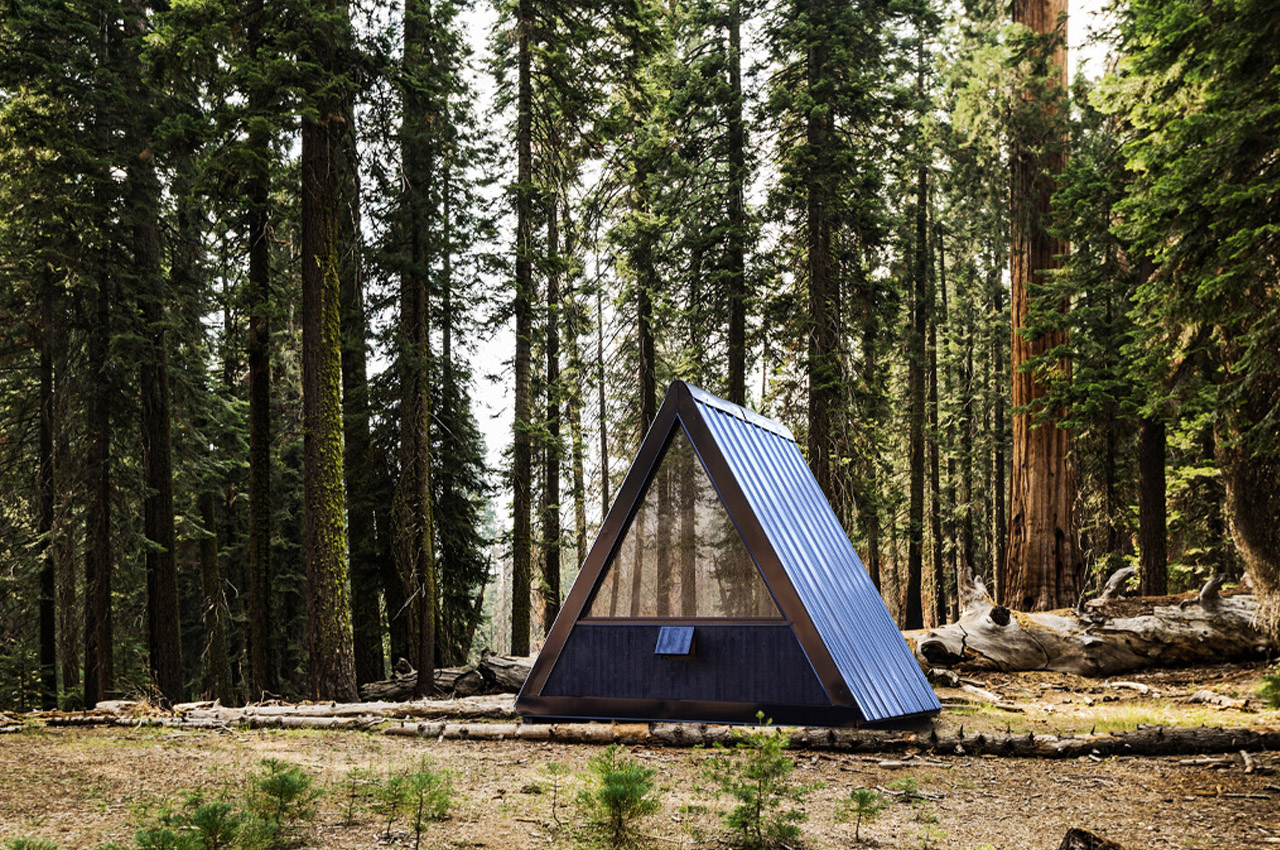 Designed especially to bring people closer to the great outdoors, Bivvi is a modular and transportable A-frame cabin that can either be attached to your car for road trips or to a chosen foundation for permanent placement. The creators at Bivvi make up a team of travelers and adventure-seekers– they built Bivvi so that we can be too. They set out to build Bivvi after noticing the inherently immobile and expensive nature of cabins and other modes of residence for travelers already on the market. Taking on mobility as their main source of inspiration, each Bivvi Cabin can be attached to a trailer hitch and tow so that they can be transported anywhere. The team behind Bivvi even outfit their A-frame cabins with off-grid capabilities including three 600W AC outlets and a 100W solar panel, so they really do mean anywhere. 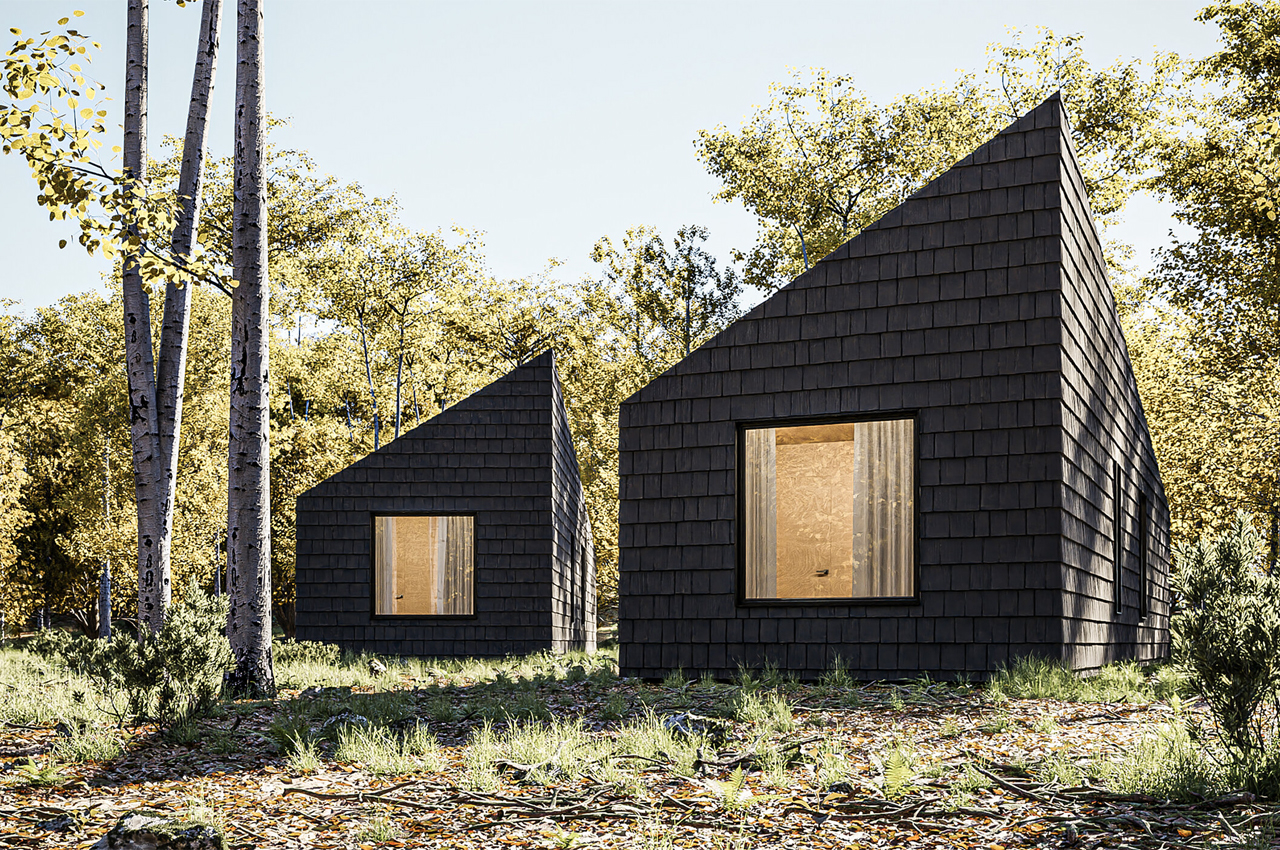 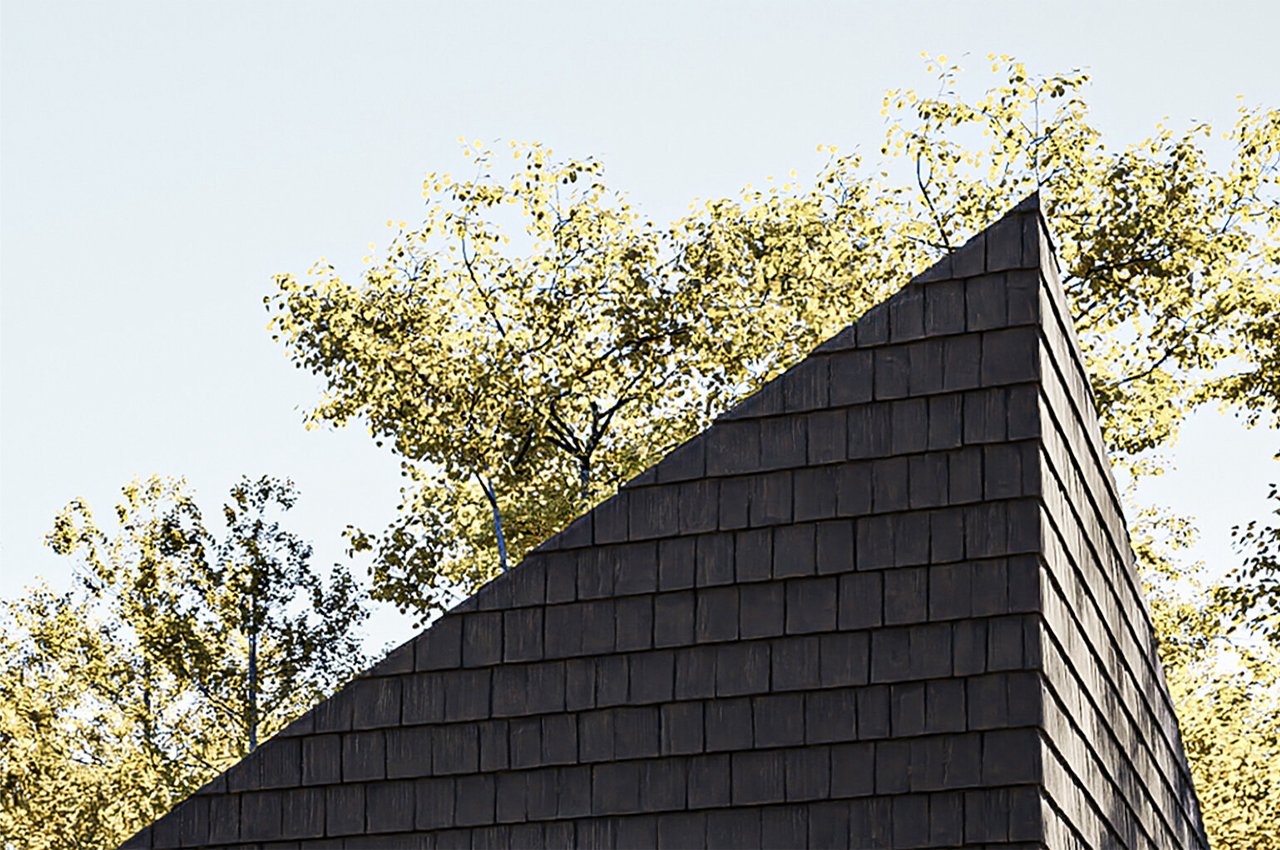 Inspired by the local area’s shingled roofs and facades, Thorpe clad Canton House’s trio of cabins, from top to bottom in blackened, locally sourced timber. Hotels are designed to immerse us in unfamiliar worlds. Bringing us to tropical coastlines and jagged cliff sides, hotels are meant to enhance the local area’s best-known features. Marc Thorpe, architect, and designer extraordinaire, recently unveiled his design for Canton House, a cluster of off-grid cabin hotels in the forest of Romania’s Carpathian Mountains that are built from locally harvested timber and inspired by the surrounding area’s vernacular architecture.

Monarch from The Bunkie Co., measures at 12′-6″W x 8′-6”D x 11′-6″H, comes complete with a fully glazed, floor-to-ceiling front-facade and standing seam steel metal cladding all around for a generally thicker grade of steel compared to typical metal cladding. While owners of Monarch have the choice of getting standard dual airflow vents installed onsite by the contractor, the rest of the tiny cabin comes outfitted with R22 insulated walls and floors, so Monarch could practically function as an escape from home on a year-round basis. Inside, Monarch can accommodate a small electric fireplace with heat control, as well as additional storage cabinets and table furniture like chairs and fold-out desks. 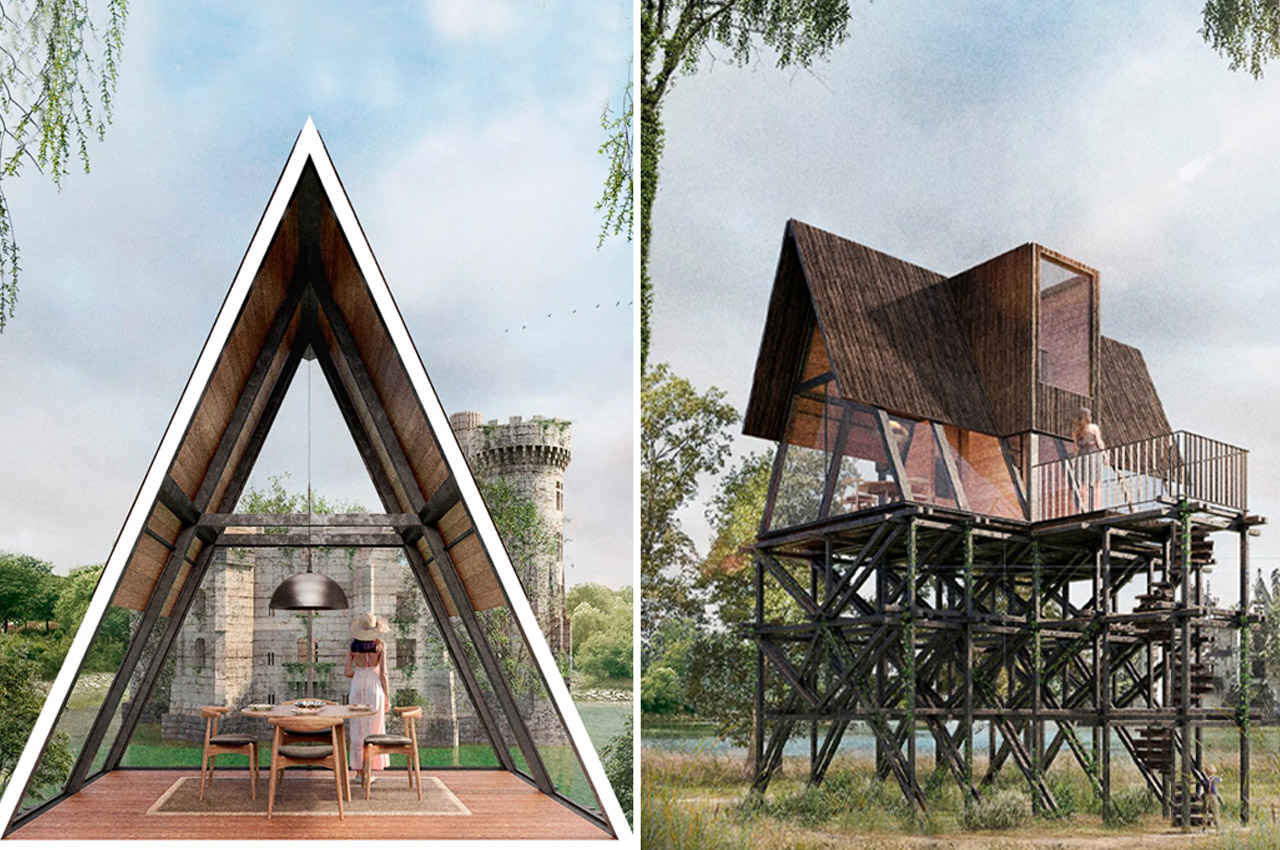 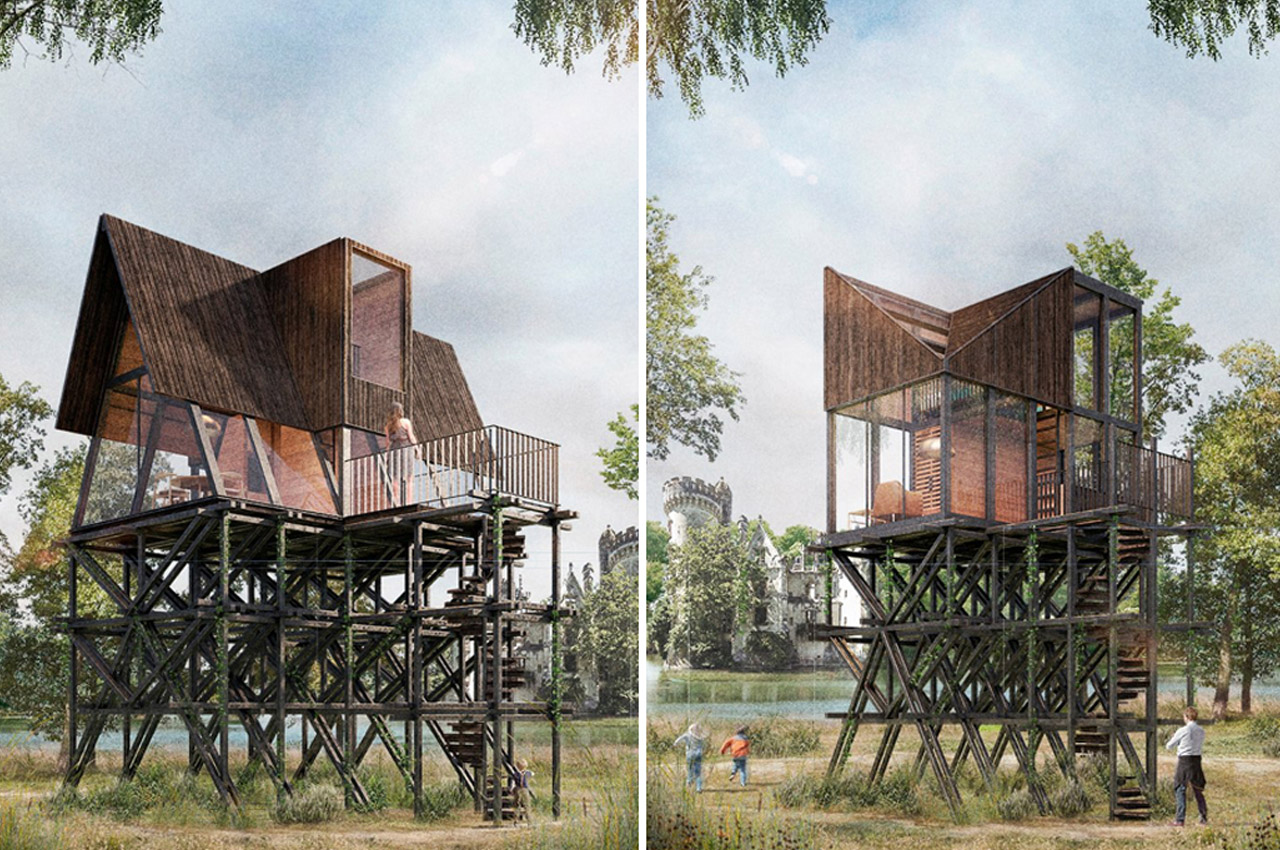 Treehouses inherently exude an air of myth and adventure. When stationed either in dense jungles as a natural hub to study wildlife or placed in a suburban backyard for kids, the treehouse is the place where the escapist can let their hair down. Take the treehouse and tuck it next to an old French castle in the countryside and it’s something straight from the storybooks. Forma Atelier, a Mexico-based architecture firm, turned that storybook setting into reality with their modular treehouse concept that cleverly combines razor-sharp triangular roofs with sweeping glass window panes to share the rural hills with that of an old French château. 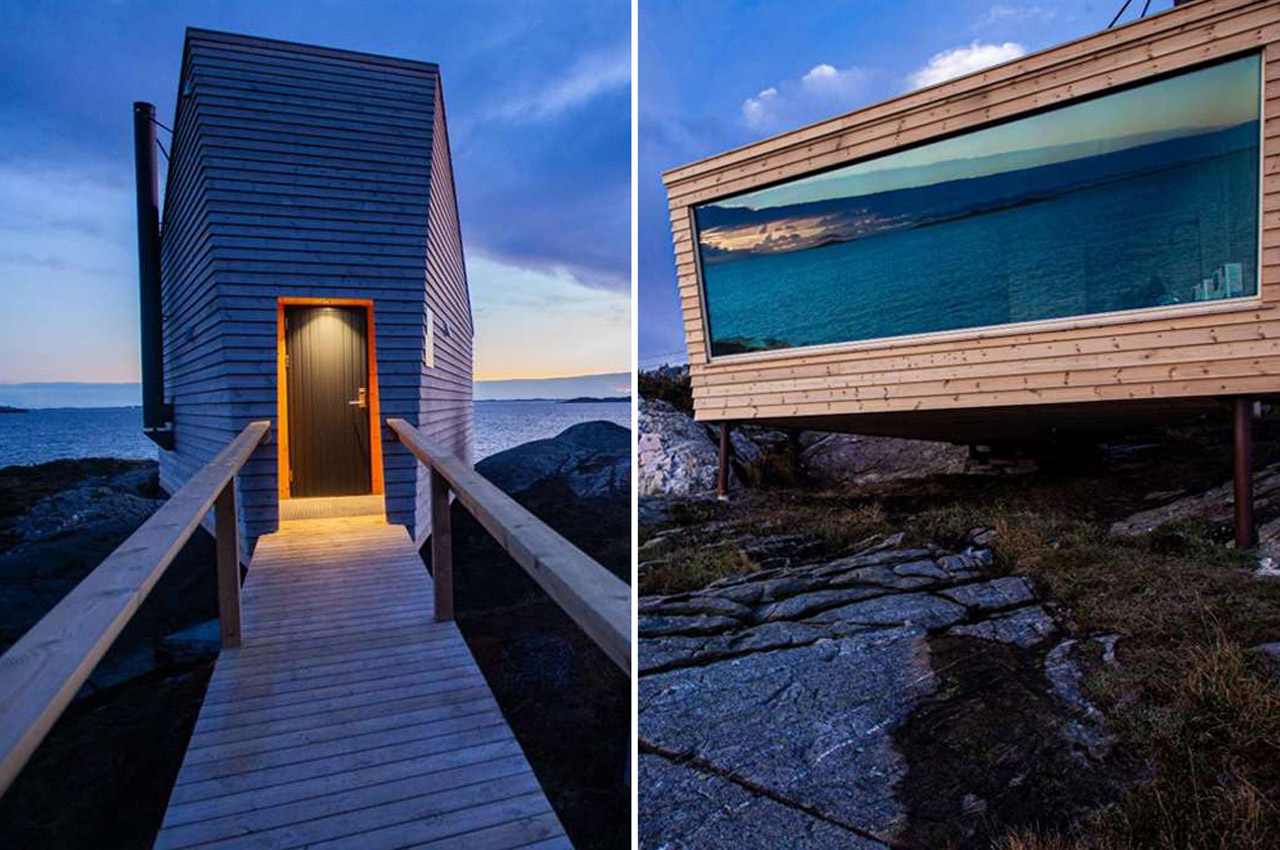 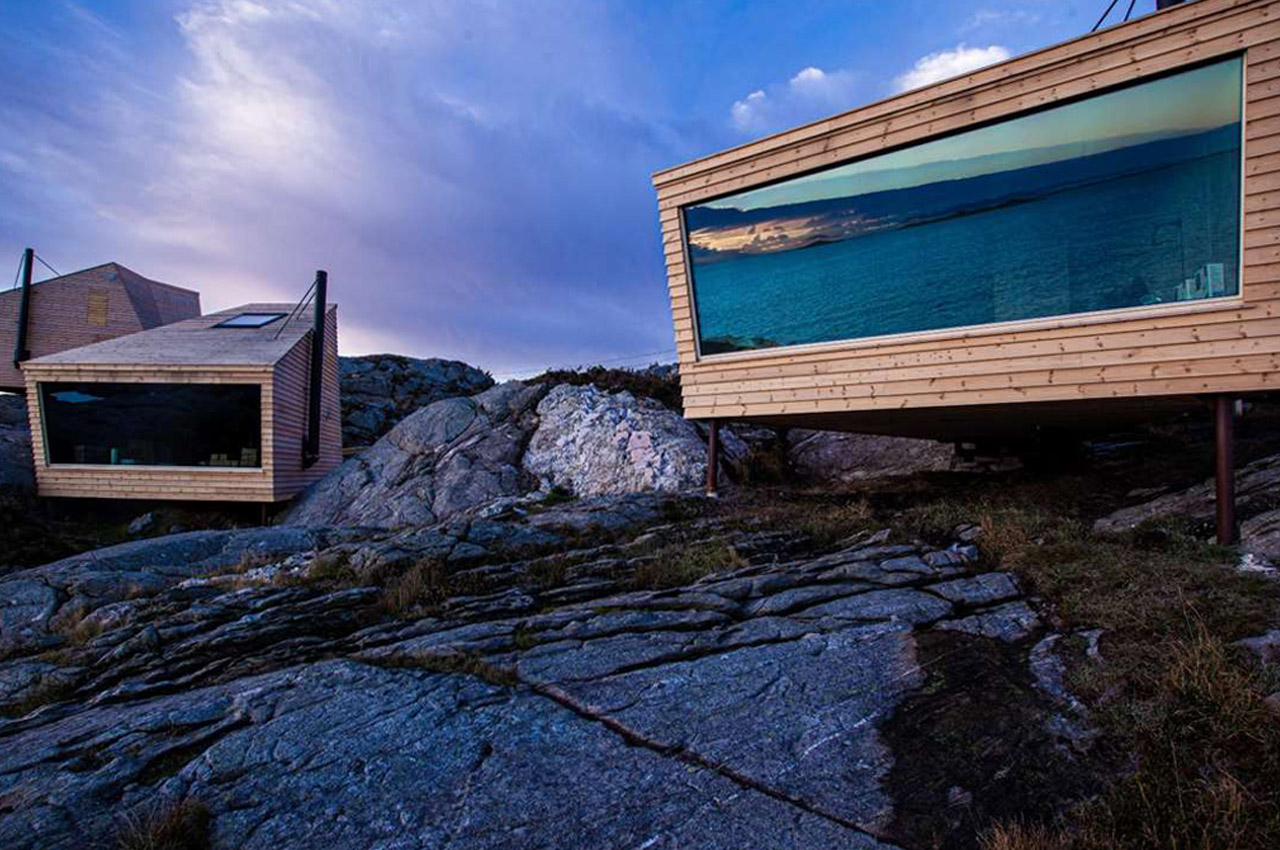 In 868, Floke Vilgerdsson went sailing from Norway to find what we presently call Iceland, along with his grandfather, three daughters, mother, and wife. Today, in honor of Vilgerdsson’s expedition, a trail of five timber cabins called Flokehyttene, designed by Holon Arkitektur, punctuate Norway’s coastline, offering panoramic views of the gusty North Sea and the 19th-century Ryvarden lighthouse. Careful not to disrupt the landscape of Sveio, the five cabins were gently integrated into the rocky, seaside mass of land by drilling four holes for all the corners of each cabin where steel columns anchor the structures in place, providing guests with an up, close, and personal experience with the changing waters of North Sea. Four of the five cabins offer accommodations for five guests and the larger fifth cabin, named after Floke’s grandfather, Horda-Kåre, can sleep up to ten people and is also wheelchair accessible. 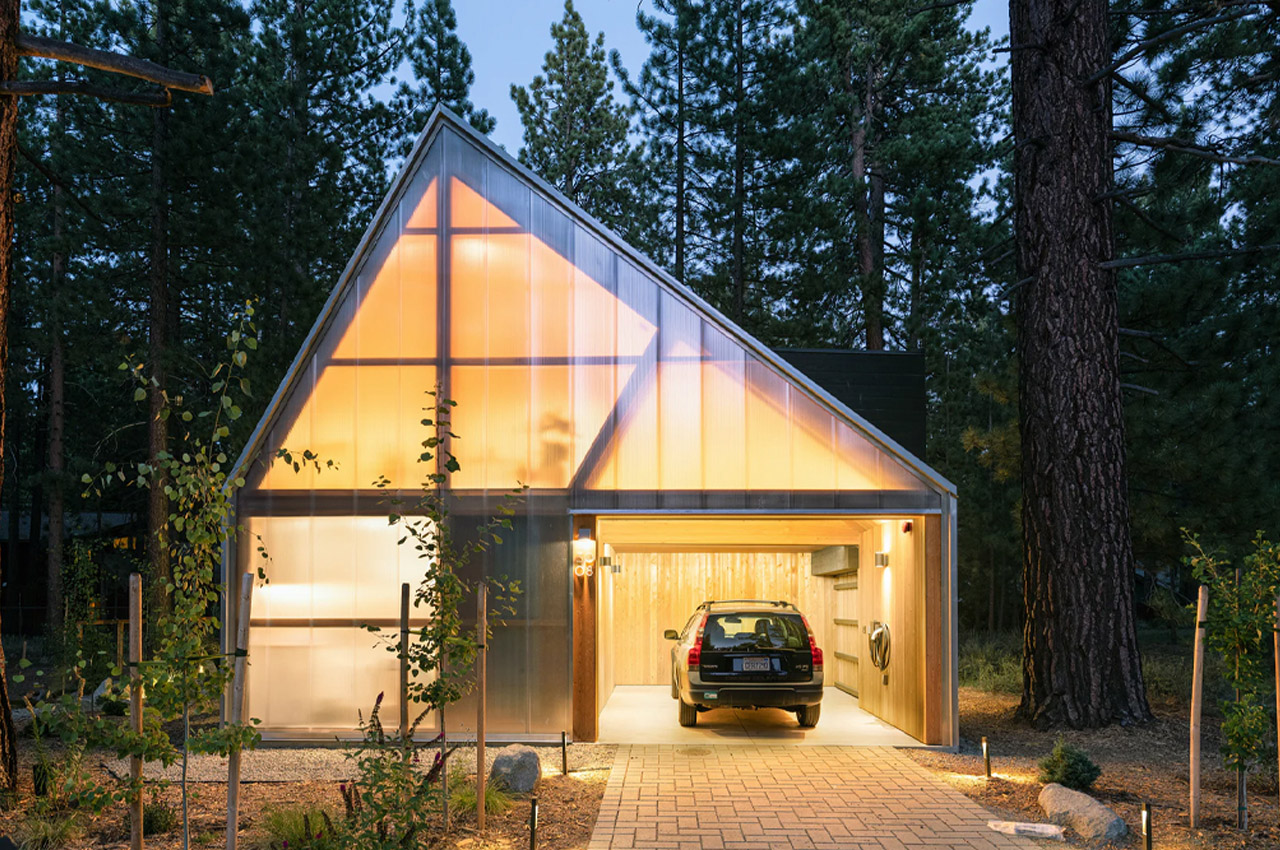 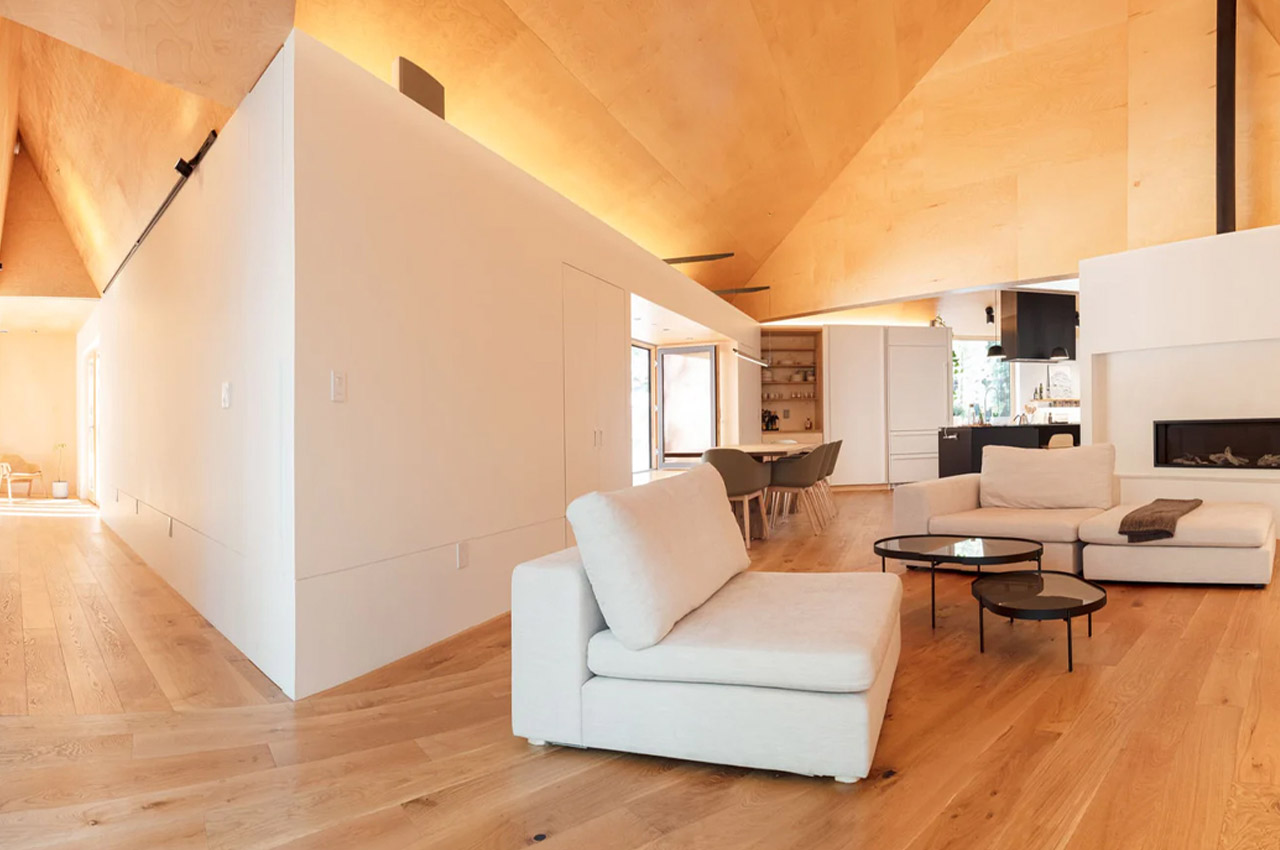 Designed and built by Joongwon Architects to minimize the home’s impact on the environment, Lightus Retreat was planned and built around the forest’s existing trees, creating a shape for the home that was defined by the land. Joongwon Architects built Lightus in a heavily wooded area, but they weren’t about to cut down any trees in the process. Moving away from the traditional symmetric and compact modes of vacation home architecture, Joongwon Architects aimed to design a lake house that first took cues from and worked in tandem with the environment. Opting to conceive the layout of Lightus by wrapping it around the forest’s existing trees, the final construction of Lightus forms an irregular and angular shape. Walking through the lake house, juxtaposing architectural accents seep the home in dynamic energy, moving between compressed corridors to open living areas and shadowed walls to bright spaces lit up by natural sunlight.

Inspired by a pleated skirt, this concept concert house has a connection with fashion!

Munich’s eastern neighborhood of Weksviertel, near the Ostbahnhof train station, has always been an extremely industrial area, corporate in origin. The German Federal State of…

Cardboard Chair Process Book is a chair design concept that constructs custom chairs from cardboard based on anthropometric studies and client interviews. Goldilocks was right–the comfort…