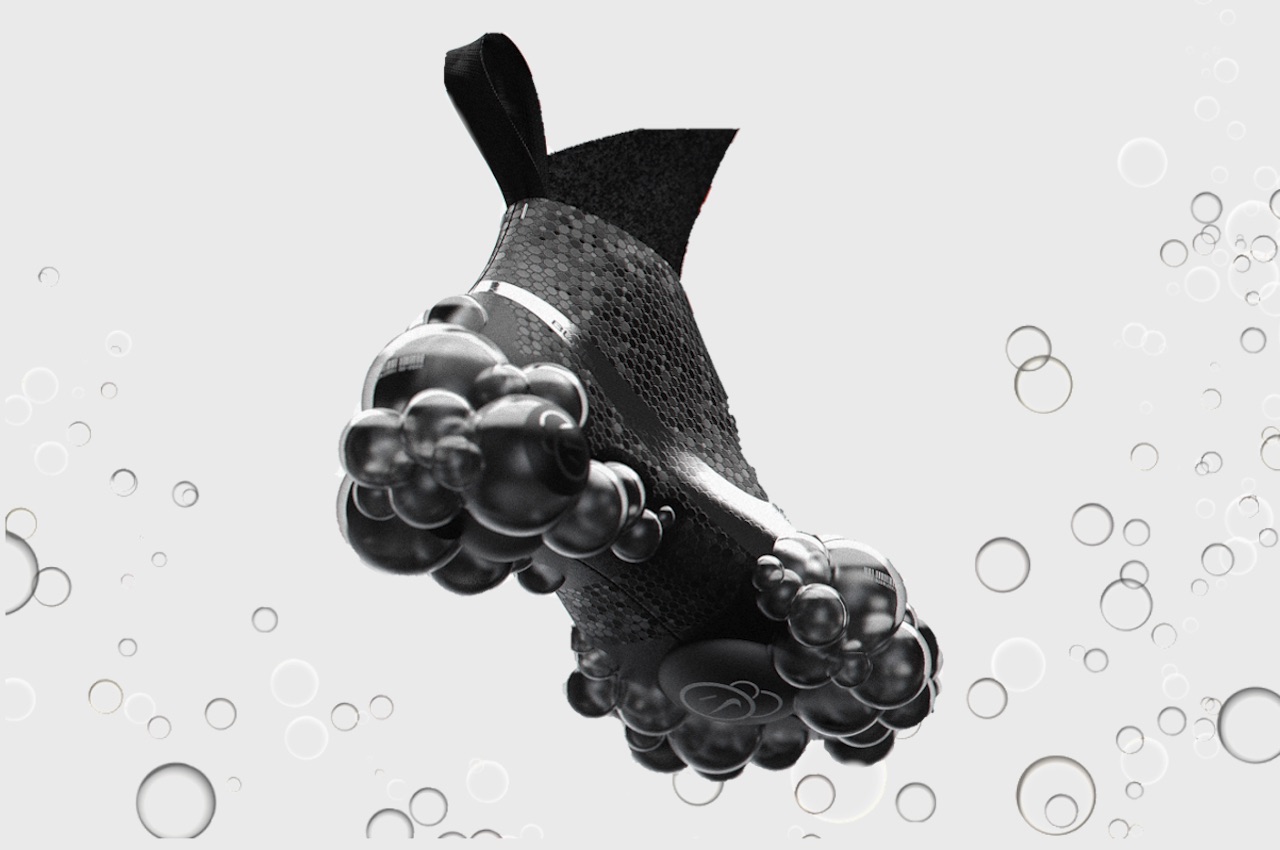 Shoes started off as functional designs meant to protect our feet, however with time they’ve now turned into style statements, a representation of our personality and our personal fashion sense. After all, don’t they say that you can tell a lot about a man by the state of his shoes? Personally, I love a good pair of sturdy and stylish sneakers, ones that can get me through the day without giving me any shoe bites, and also match my outfits! However, I do know that this isn’t the case with everybody. People have high demands and expectations when it comes to their footwear, hence designers are unleashing all of their creative juices, leaving no stones unturned in making unique, innovative, and ergonomic shoes! From a Nike Bubble Max concept sneakers to 3D printed sneakers that will leave you feeling like Bigfoot – these footwear designs are as futuristic, inventive, and fashionable as they can get! 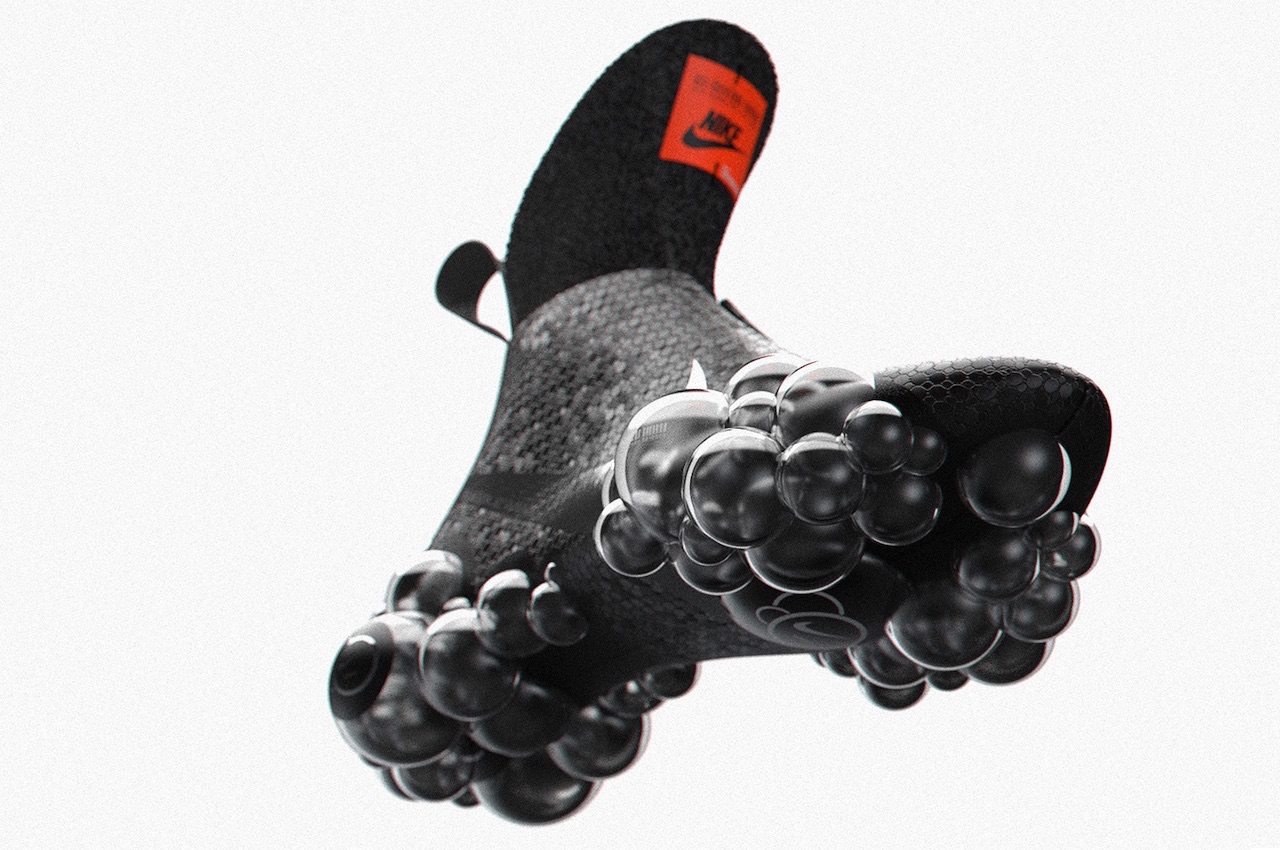 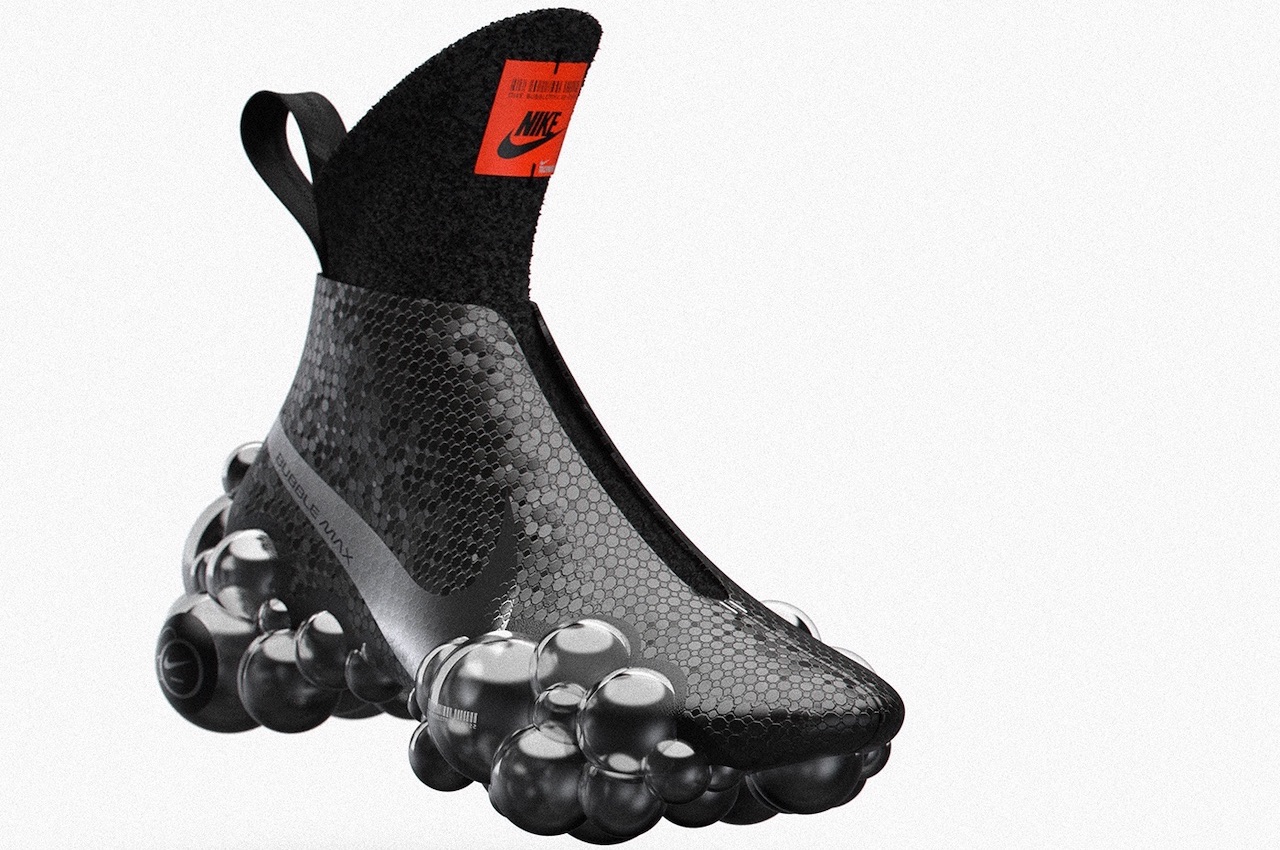 From the Nike Air Max series, sneakerheads may someday start their Nike Bubble Max collection. Of course, it still is a concept but like most unique designs from the brand, this will sell. But then again, the same pair will be hated by people with trypophobia (fear of clusters of bumps or holes). The image renders show an upper with a dotted pattern that looks and we’re guessing feels like scales. It could be something similar to what was used on the Nike Zoom Kobe 6 “Grinch” Protro. The large Swoosh with Bubble Max written on the side appears to be painted. The tongue area simply shows a split in the middle where the sock liner is exposed. The liner extends above the ankle, giving a high-top illusion. When it comes to real function, walking on the Nike Bubble Max may feel like you’re walking on the clouds. 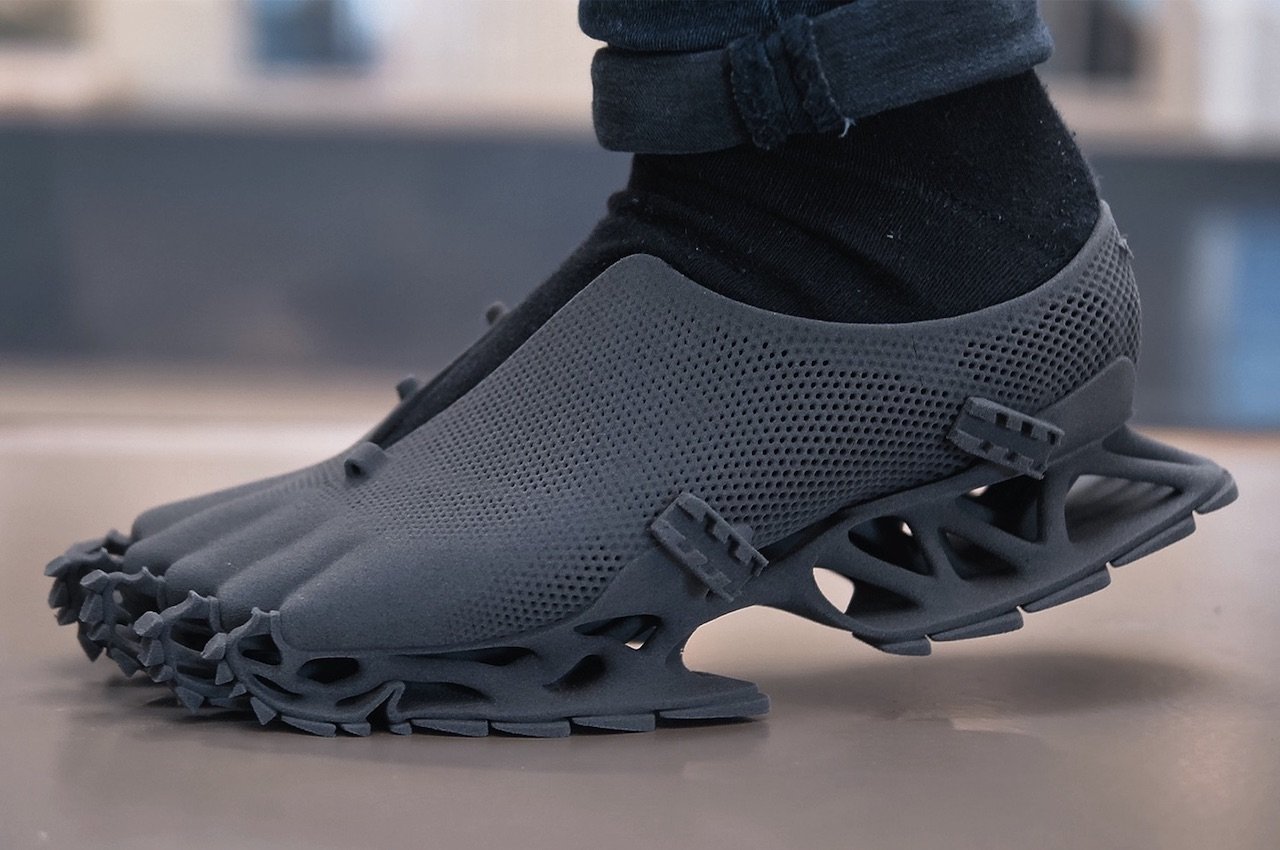 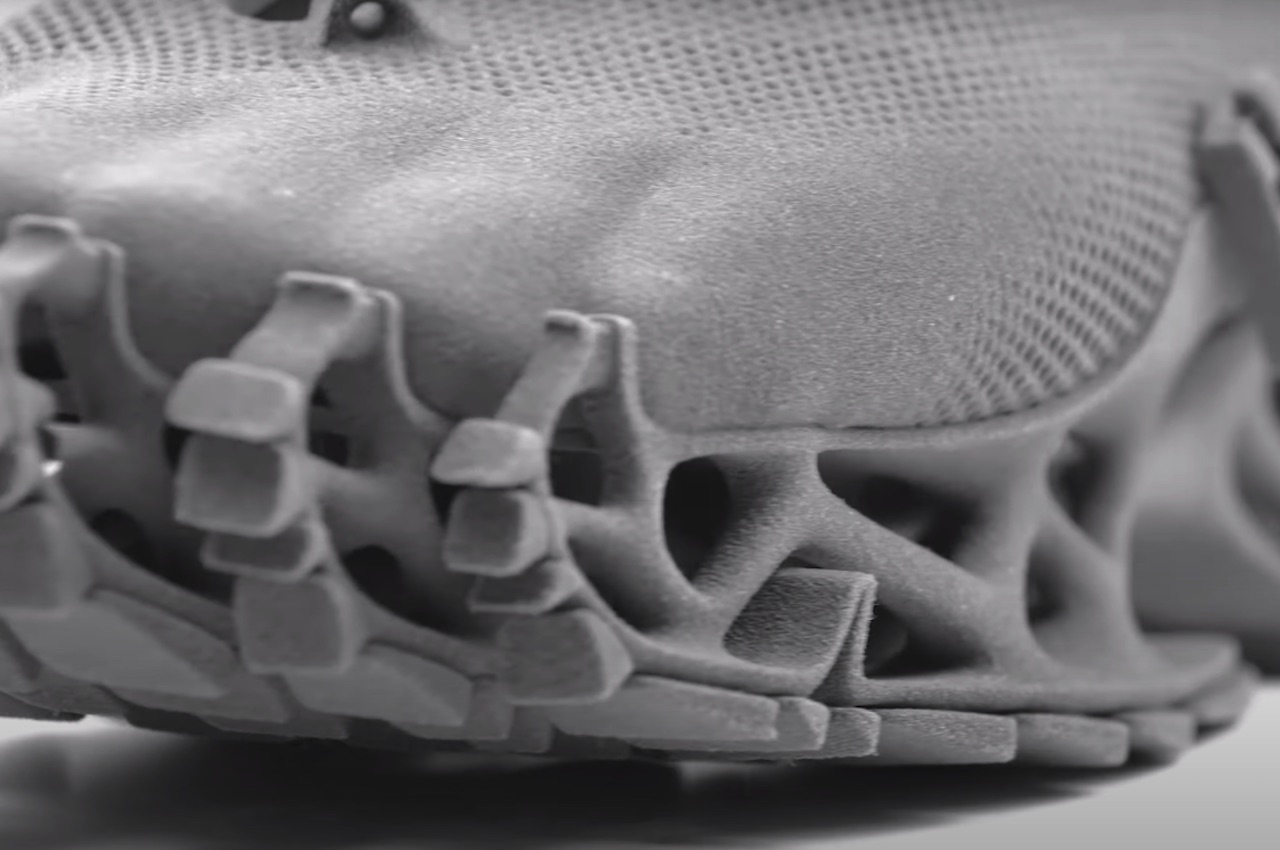 The Cryptide Sneaker was designed by Stephan Henrich for Sintratec. The German architect and designer came up with a pair of full 3D shoes meant to be laser sintered with a flexible TPE material. Using a Sintratec S2 System 3D printer, the shoes were formed and printed. The Cryptide features a sole with an open design. The designer said it was made possible by SLS production (Selective Laser Sintering) and a material called Sintratec TPE elastomer. Simply put, SLS is additive manufacturing that takes advantage of a laser to sinter particles into a more solid 3D structure. Henrich and Sintratec worked together to bring the sneaker design into reality. 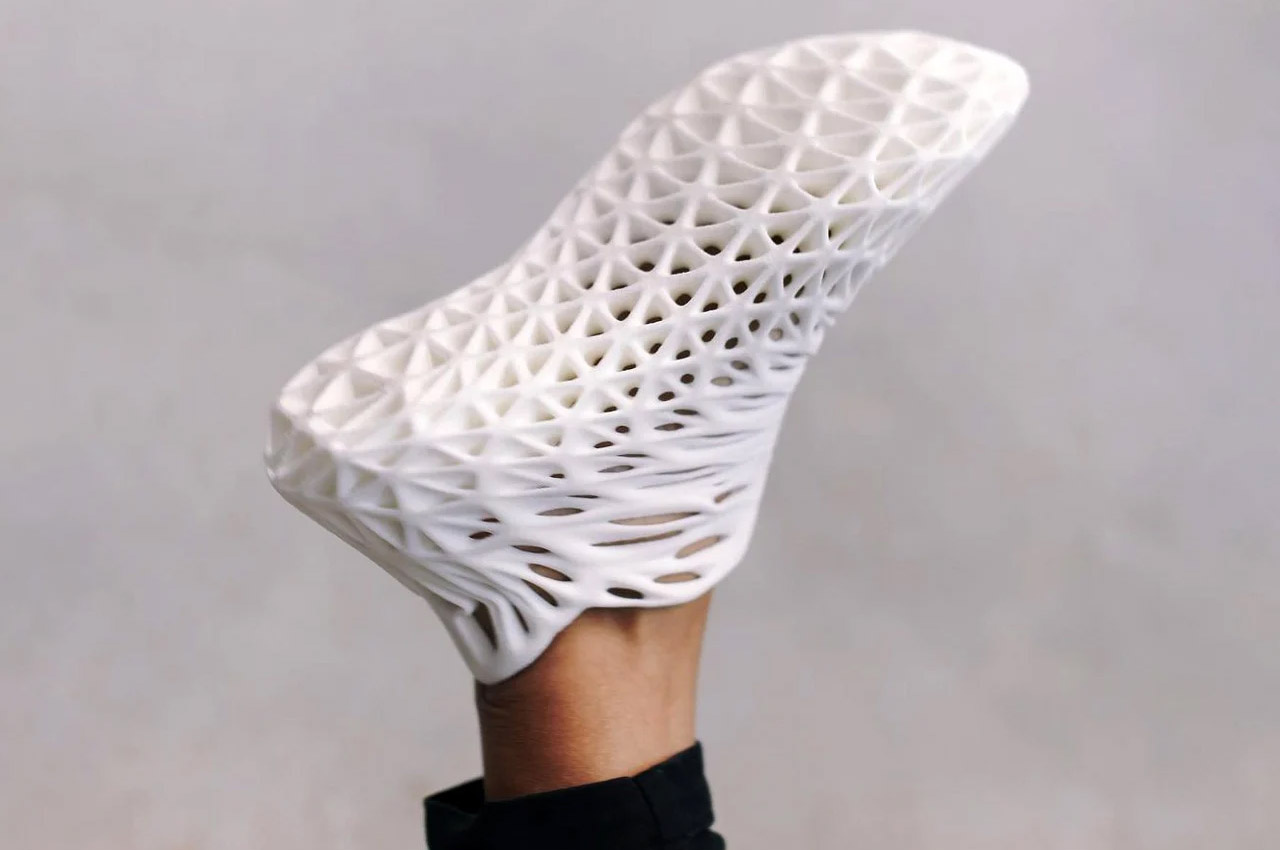 The Parametriks Print 001 sneaker makes clever use of design and material sciences to create a sneaker that’s comfortable, stylish, and easy to manufacture. Sort of like how crocks just use one material that’s injection-molded into the shape of a shoe, the Print 001 relies on 3D printing to fabricate its design… which was arrived at by using parametric algorithms. The shoe/sneaker uses a rather intriguing triangular mesh matrix that warps right around the wearer’s foot, fitting it perfectly thanks to the shoe’s bespoke design. Made from TPU, the shoe is about as flexible as a pair of Crocs, while looking infinitely cooler and offering a level of breathability and flexibility that’s unmatched. 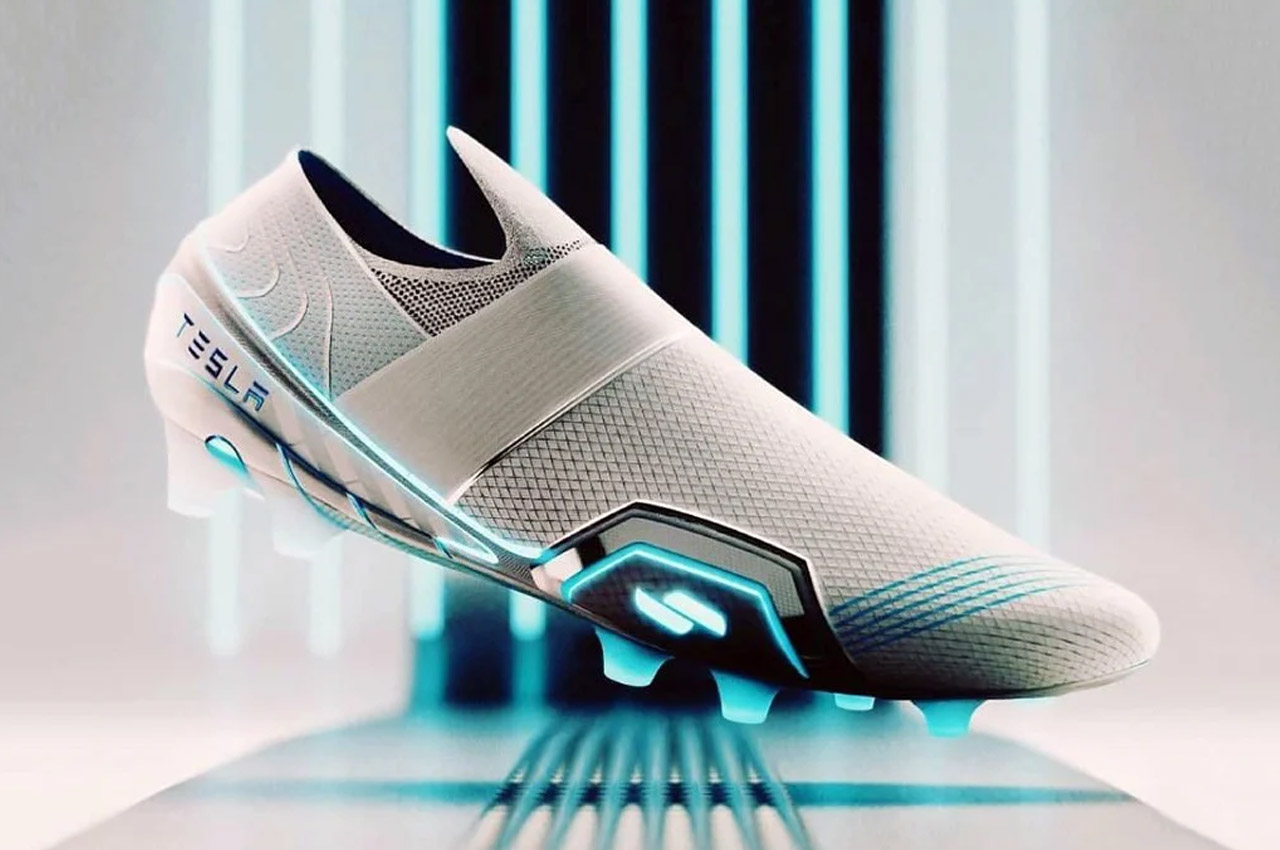 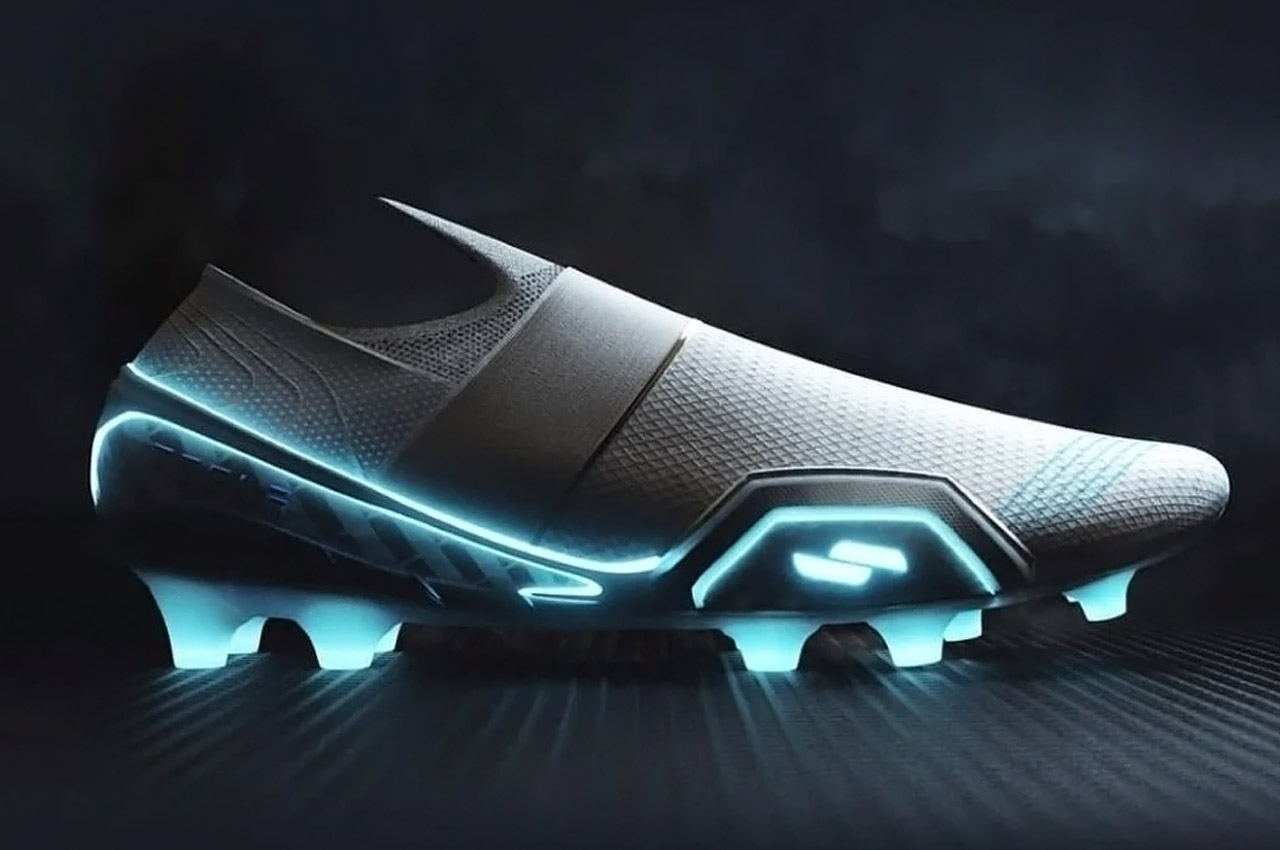 Former designer at Nike and Adidas, Hussain Almossawi, found himself asking a question. As a Tesla enthusiast, what if the company with its resources, creativity, and incredibly wealthy CEO, decided to go beyond sports cars and design sports apparel instead? The conceptual Tesla Football Shoes combine Hussain’s love for football and for the Tesla brand into one positively radiant pair of performance sportswear. The shoes come in pristine white, with electroluminescent fabric woven into the sides and back, creating bright lines on the side, leading to a glowing, pulsating Tesla logo at the back. Moreover, the studs on the base of the shoes glow too, making them look exceptional in the dark but even more so when you’re dribbling away with the ball, creating one of the most beautiful light streaks as you run!

This Air Force 1 Low comes with a removable Swoosh-shaped carabiner fastened over the rubber Swoosh on its lateral. The interesting catch here, for an outdoorsy in you, is that the carabiner is of no more use than being used as a keychain hanging from a loop of your jeans. The metal EDC on the Swoosh is removable, but the labeling on it suggests, it can only bear a kg of weight (roughly 2 pounds). So, if you were thinking of strapping out a carabiner from your shoe and begin your excursion on a vertical rock, turn back! 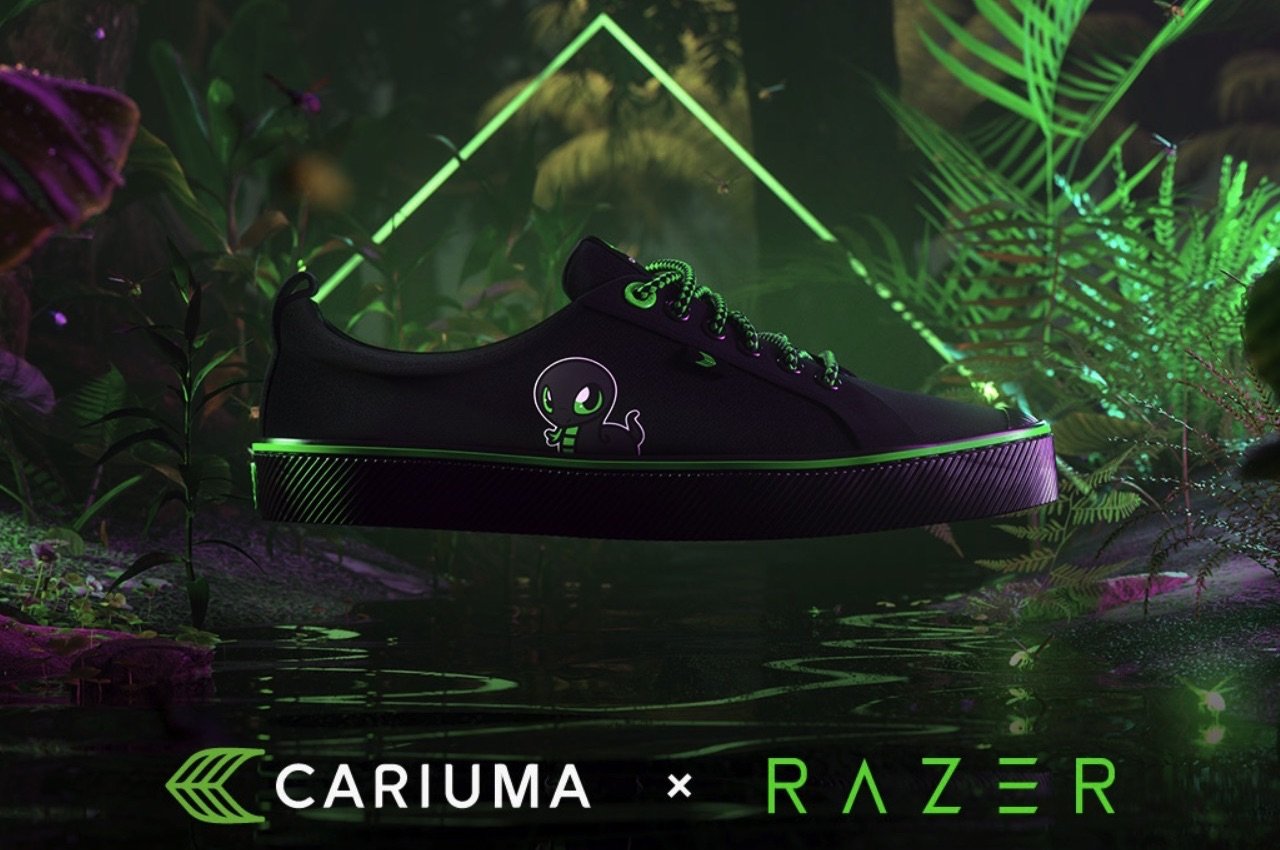 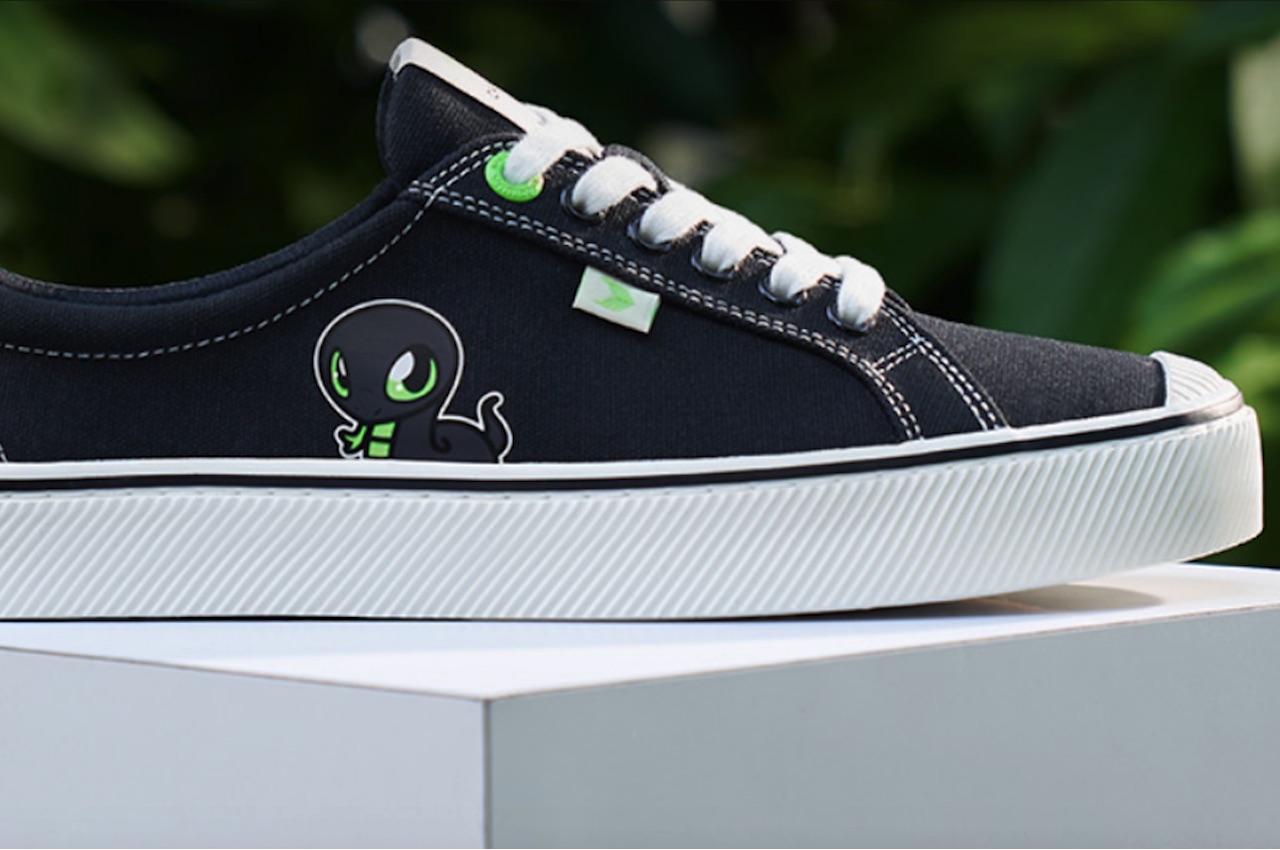 The Razer Cariuma Sneakers’ upper and lining are made of organic cotton canvas. The sole uses a slip-resistant natural rubber. You can choose from either the black or white insole. For added comfort, the insole features memory foam and mamona oil bio-based cork insert which is a signature Cariuma feature. The shoelaces on either the low or high version are made with recycled plastic, passing through those debossed metal aglets. Like most pairs from Cariuma, the sneakers’ construction is handmade vulcanized with a fully stitched outsole. 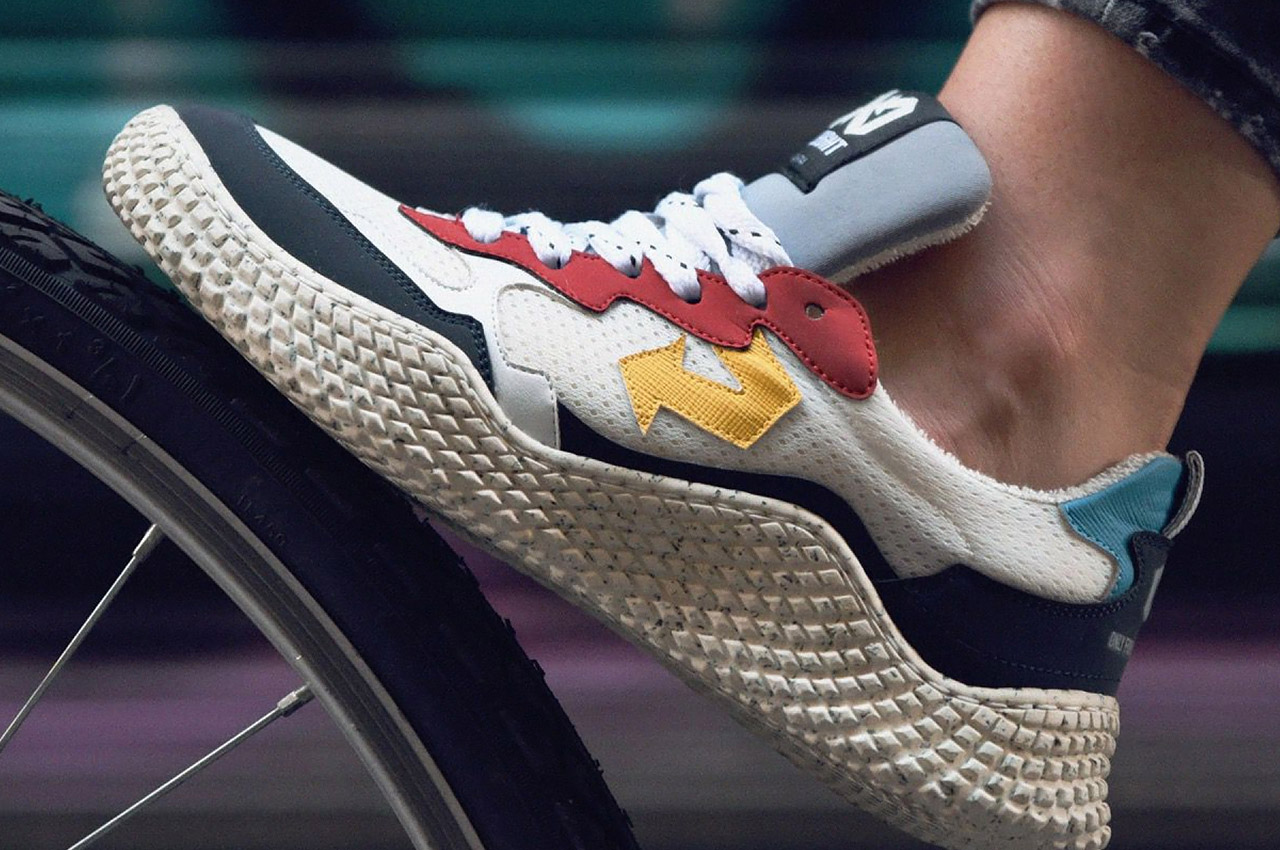 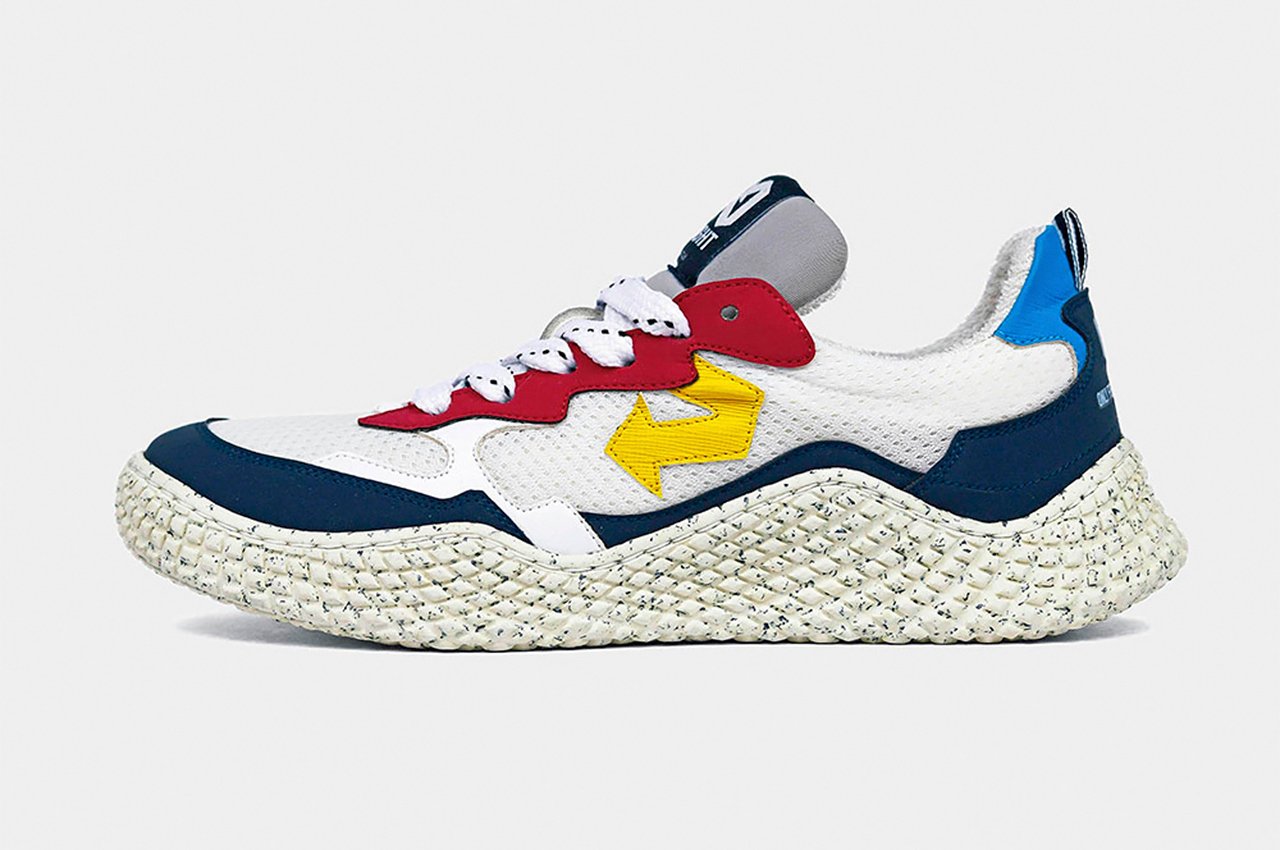 Inspired by the 90s with references to the navy look, the sustainable shoes express the ironic and dynamic style of ID.EIGHT. The contrast between the upper in white recycled polyester and the AppleSkin details in shades of red and blue create a mix of contemporary and light colors. They use four materials derived from apples, grapes, seeds, and pineapples. Piñatex , made with the waste leaves of pineapple grown in the Philippines; Vegea , obtained from the bio-polymerization of marc in Italy; AppleSkin , obtained from the bio-polymerization of apple peels and cores always in Italy. It features lycra and recycled mesh for inserts on the upper, sole, laces, and the label is also made of recycled materials. 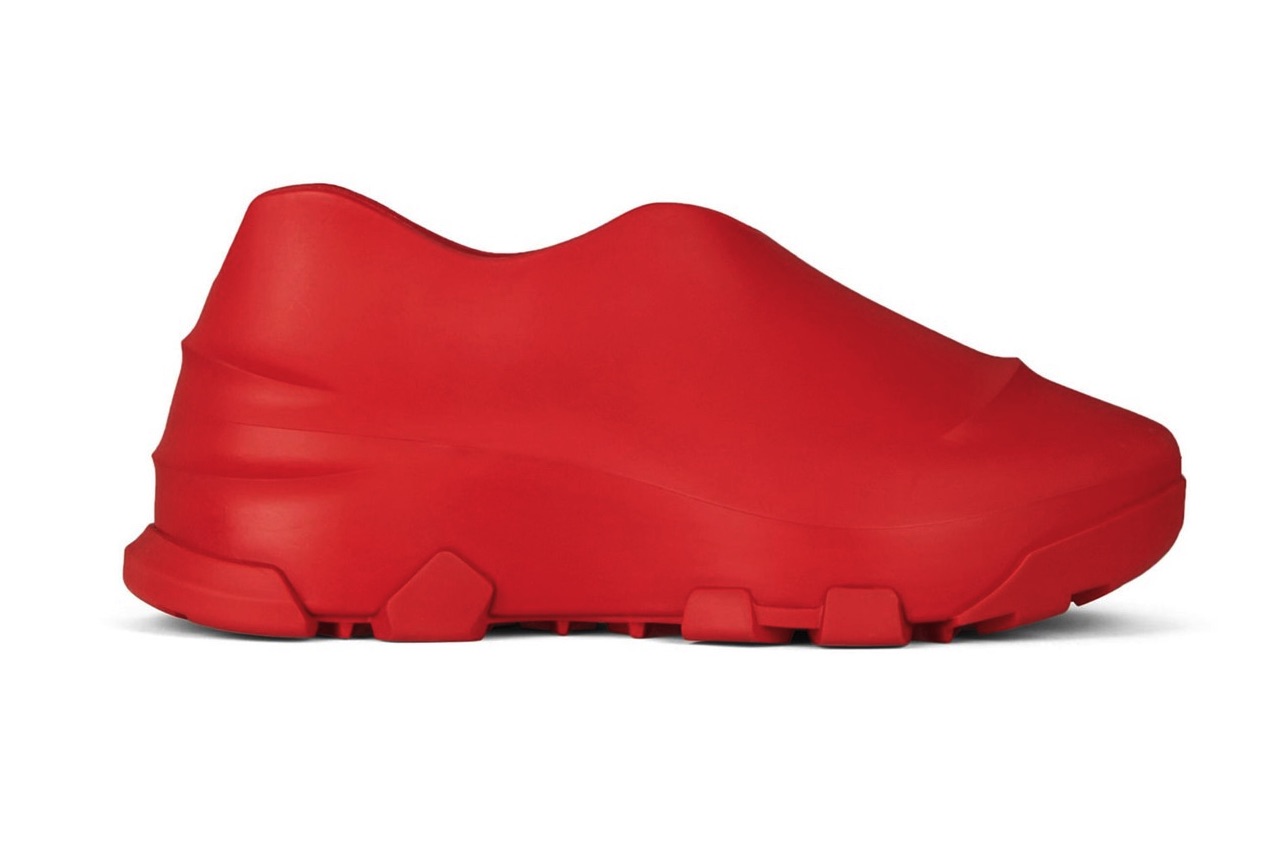 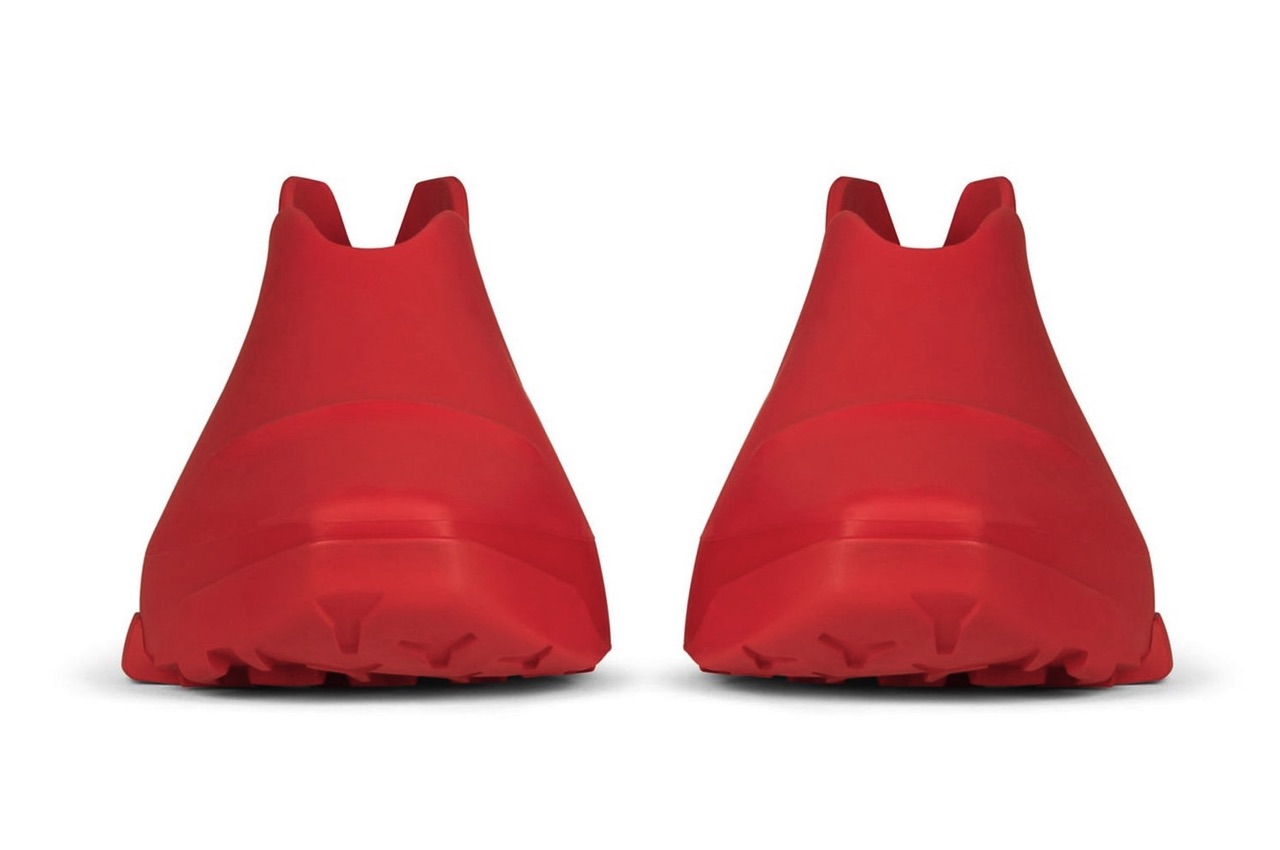 When American fashion designer Matthew M. Williams joined Givenchy as its Creative Director in June 2020, he started introducing different designs that appear futuristic. The most popular from a recent collection is the Monumental Mallow which now comes in all red. The red sneaker is ready in two iterations: matte and glossy. The slip-on sneakers look sleek and simple in matte, giving off a subtle and minimal look. The glossy variant, on the other hand, looks shocking and loud. 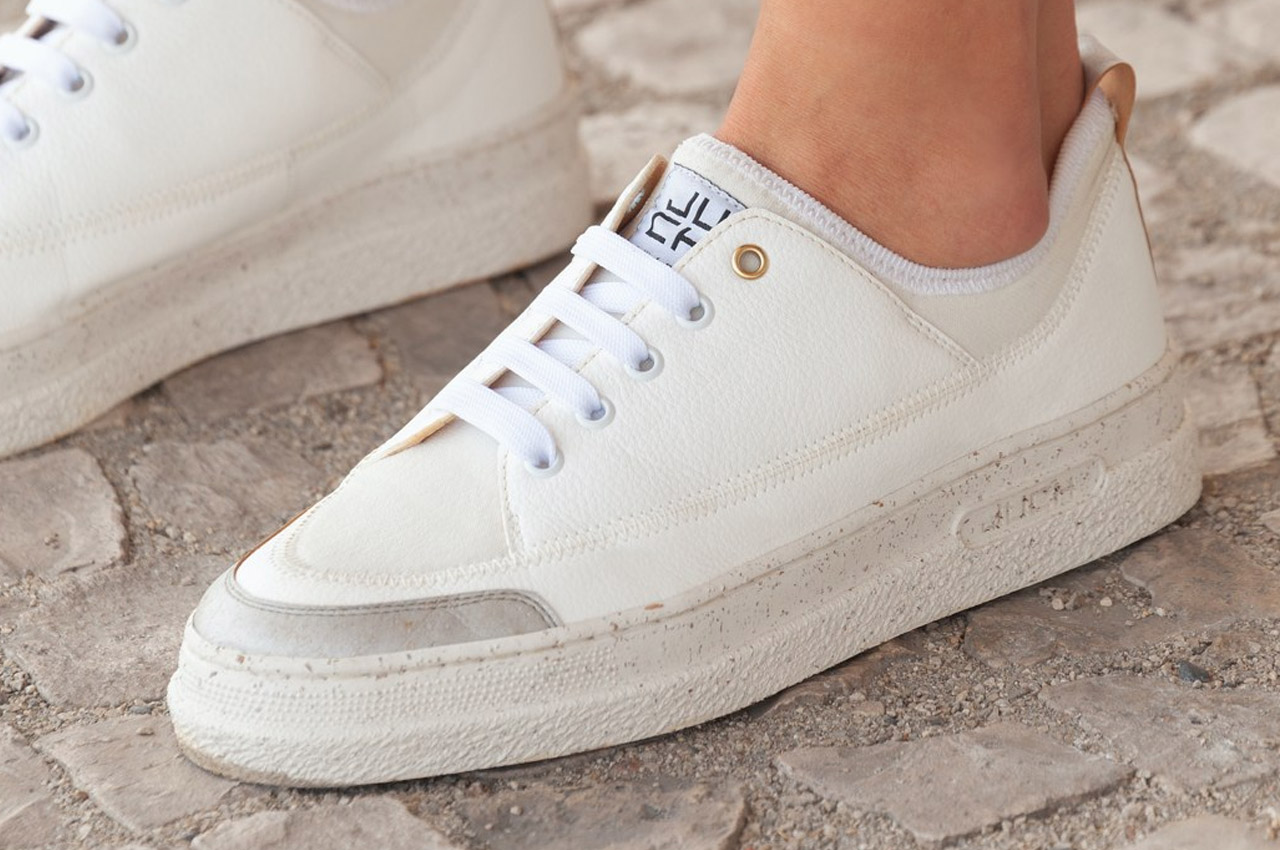 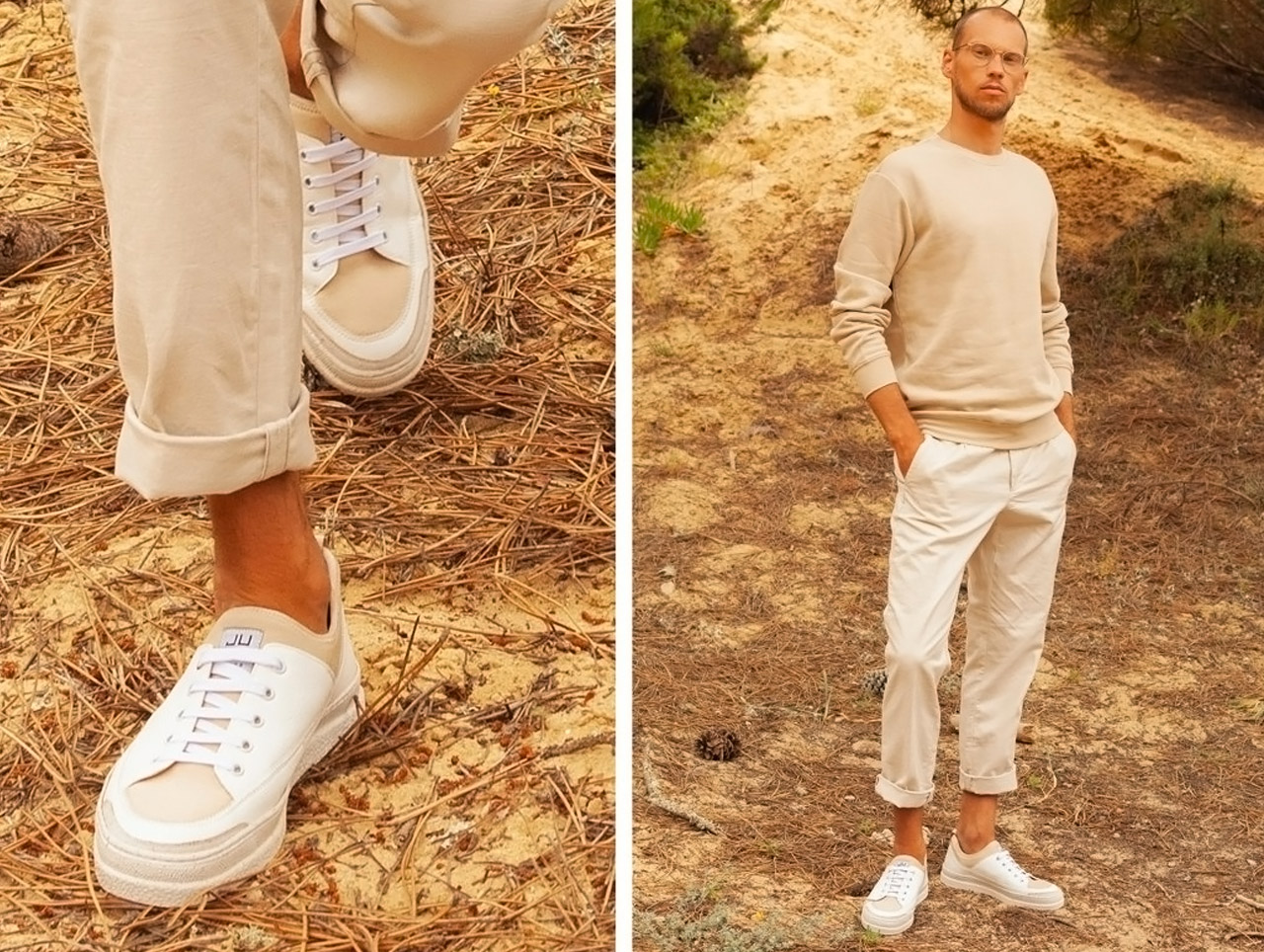 Element 0 is altering how shoes are designed and manufactured by making sustainability just as important as comfort. This means re-engineering the shoe’s materials in a way that benefits your feet as well as the environment. Element 0’s sneakers sport a unisex design built from both naturally sourced as well as recycled materials (the company is even transparent about where and how they source their materials). The shoes rest on an outsole that’s made from rubber as well as recycled cork, quite literally putting a spring in your step; while an insole crafted from a combination of wool, corn-fiber, wood, and natural latex gives your foot a comfortable surface to rest on that’s also water-absorbent and anti-odor. 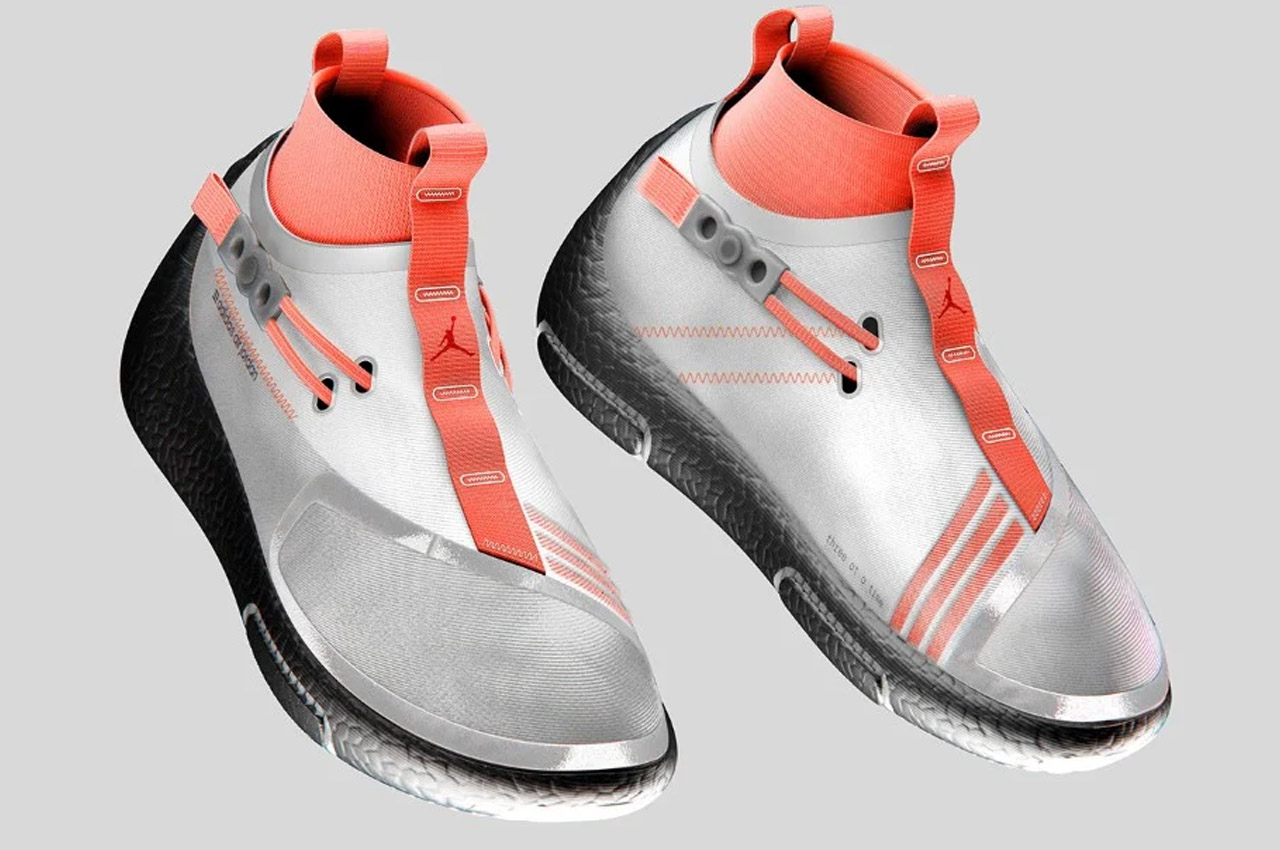 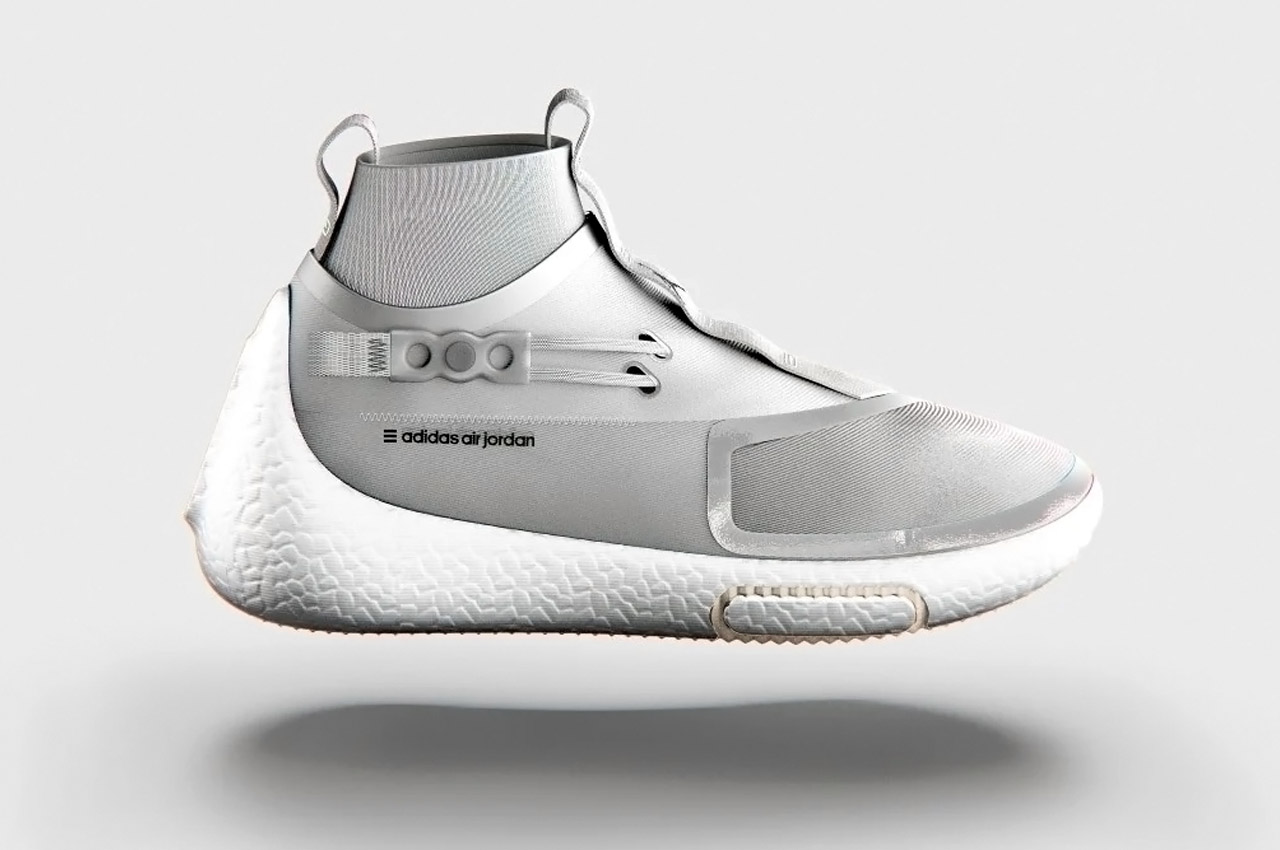 Designer Thomas Le decided to take a stab at creating conceptual Adidas Air Jordans. The Adidas Air Jordans sport a very contemporary space-inspired aesthetic, tipping their hat not only at the progress we’ve made with space travel over the past few years but also sort of giving a nod to Jordan’s 1996 film Space Jam. Built with the classic Boost outsoles and their bubbly texture, the Adidas Air Jordans outsoles extend all the way to the back of the heel. The lifestyle sneaker also opts for a laceless design, with elastic fasteners on each side, along with an outer body that’s been knit to hug your feet for a secure fit. They’ve been rendered in three colors, for now… an astronaut-ish white, a space-gray, and a coral-white-black combination that feels like a contemporary take on the original Air Jordans color scheme.

Braille Smart Gear is the latest in the trend of wearable smart devices, but focuses on usability for those with sight impairments. Using a transforming…

Nobody needed a Cybertruck-inspired Xbox gaming console, but we’ll show you one anyway

Planet-friendly e-bicycle designs to commute in style while improving your health!

In 2021, living more sustainably and consciously should be a priority for all of us. Whether it’s making changes in our daily lives, consumption, or…