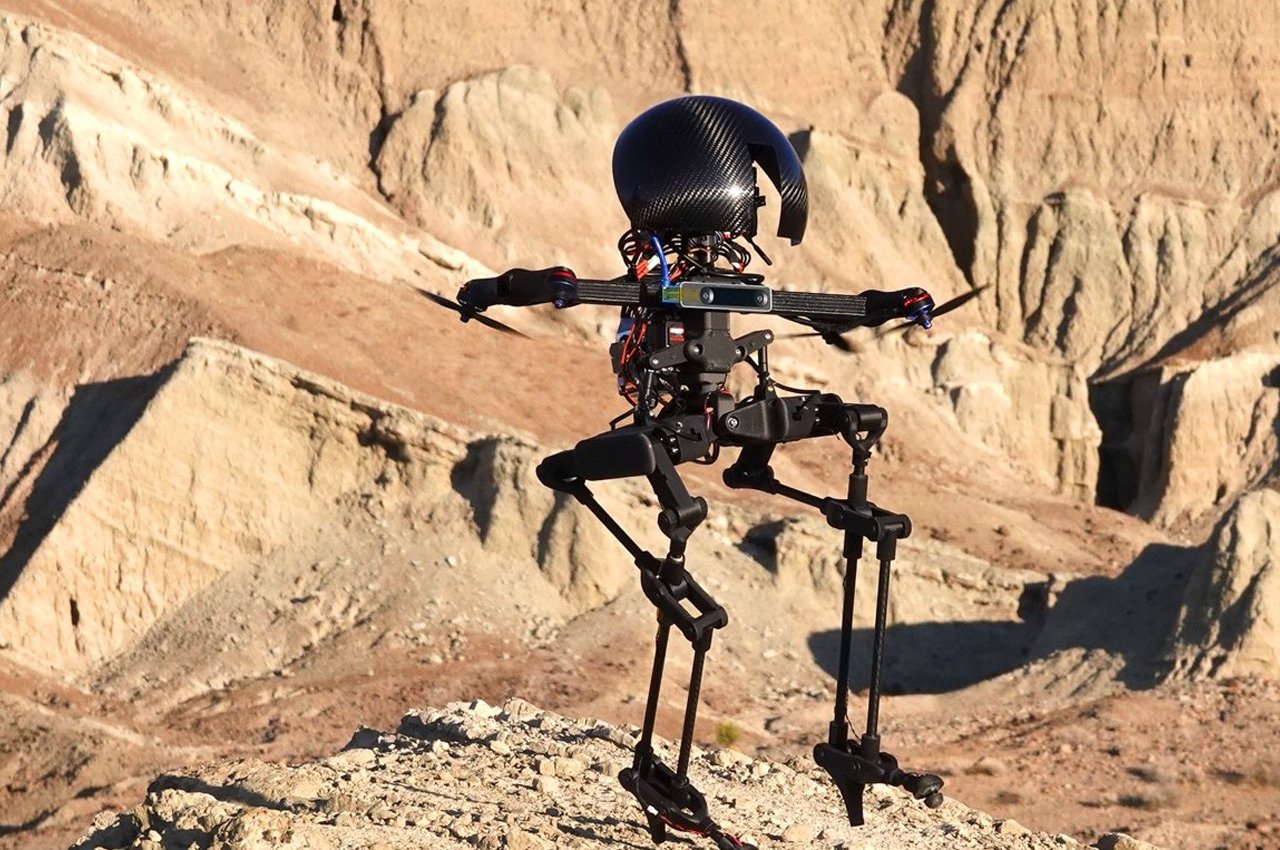 Researchers at Caltech designed LEO, a hybrid, bipedal robot, that combines flying and walking to experiment with the future of locomotive robotics.

If you’ve ever seen a heron take flight or land afterward, you’ve probably admired how gracefully they move. Like cats, they seem to always stick the landing. Inspired by the flight and movement of birds like herons, researchers at Caltech created a clever, bipedal robot with a small stature and uncanny knack for balance. In its current form, LEONARDO, as they. call the robot, is strictly experimental. However, future applications could find LEONARDO tactfully sticking the landing on a solo mission to Mars or leading the way to adaptive landing systems for other robots on Earth.

LEONARDO, or LEO for short, stands for LEgs ONboARD drOne and is equipped with a pair of multi-joint legs and propeller thrusters to stabilize its walking gait and allow the robot to hop and jump. Standing only 2.5 feet tall, LEO is lanky in proportions, with long legs and the main body measuring only half the length of them. These proportions aid in LEO’s varied locomotive capabilities, from flying to walking. The researchers at Caltech explain, “The point of LEO is to give unprecedented walking ability and to solve problems posed by hybrid locomotion. LEO is capable of many tricks: tight-rope walking, stair flying, and skateboard riding. LEO is helping engineers rethink how robots could move in the future and could open difficult environments to robotic exploration.”

While LEO is more or less a passion project that serves to experiment with the potential of locomotive robotics future applications could find LEO revolutionizing adaptive landing gear systems, not only for Earth-bound robotic exploration missions but for rotorcraft on Mars. Caltech researcher Soon-Jo Chung, Bren Professor of Aerospace and Control and Dynamical Systems explains, “By using a hybrid movement that is somewhere between walking and flying, the researchers get the best of both worlds in terms of locomotion. LEO’s lightweight legs take the stress off of its thrusters by supporting the bulk of the weight, but because the thrusters are controlled synchronously with leg joints, LEO has uncanny balance.”

In this digicam era there still exist old school folks who prefer photo albums and frames on the mantle place. Frames for pictures do have…

Those who have bought the iPad mini have completely warmed up to the downsized wonder and are actually appreciating its convenience thanks to its size….

Walking in the footsteps of Elevate – Hyundai’s Ultimate Mobility Vehicle (UMV) shown-off at CES 2019, is the all-new TIGER that the Hyundai Motor Group revealed today….

The Propel Watch Gets a Price Slash

You just woke up to one of the best deals ever; Propel Watch by Projects @ YD Store is up for a great price that’s…