Meet Curvo, a guitar that’s far from traditional. Although the knee-jerk term is to call Curvo an electric guitar, it is in fact, an electronic guitar that works using touch and velocity sensors sort of like a MIDI controller. The absence of strings, however, isn’t a feature but rather the consequence of a feature. You see, unlike any guitar ever made, Curvo comes with a radically curved fretboard that’s designed to make playing, jamming, and shredding much more comfortable without causing repetitive strain injury to parts of your palm, fingers, and wrist. 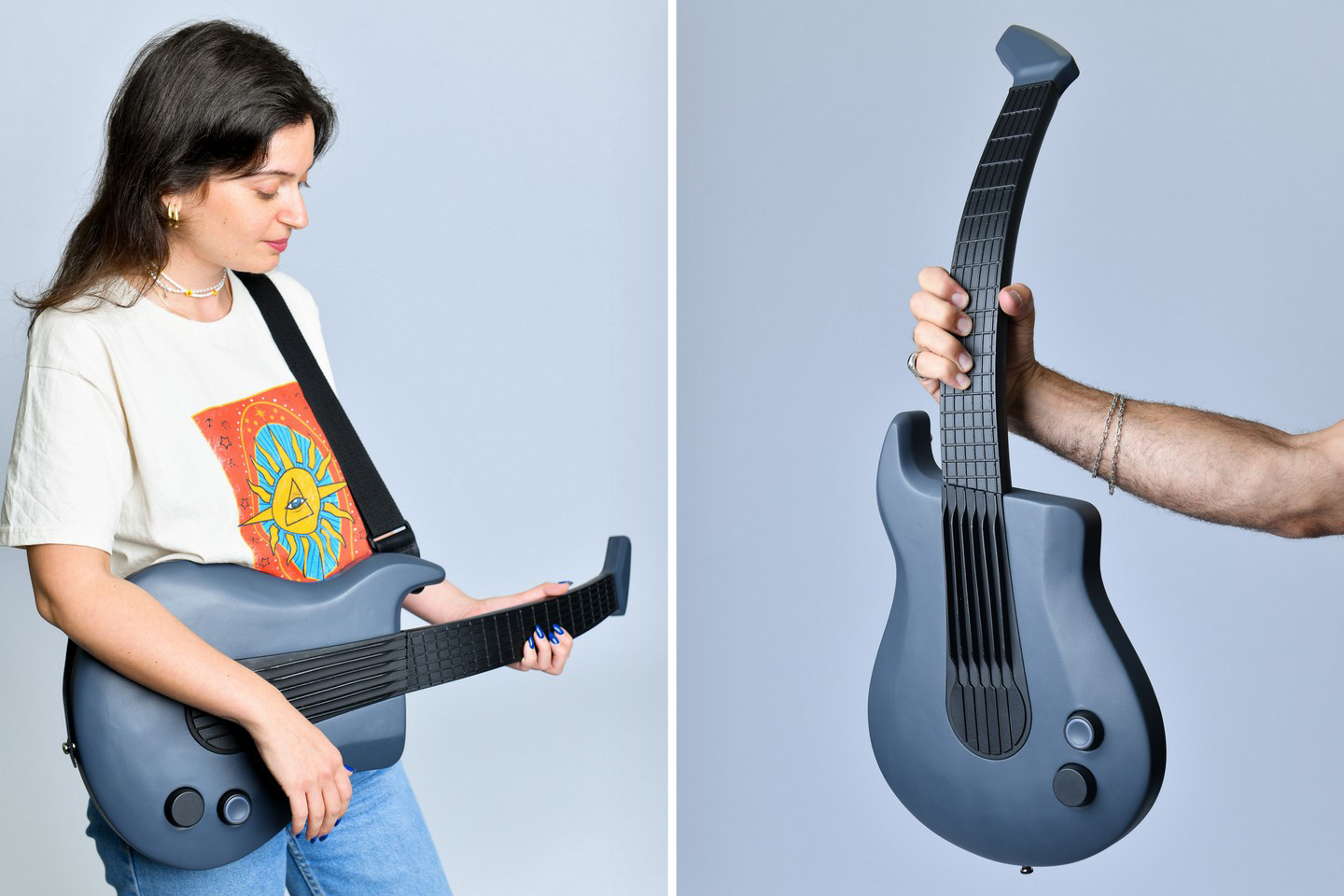 “A guitar is somewhat of a ‘primitive’ instrument and the players have to maneuver themselves around the instrument in order to play – which can lead to the misuse of the instrument”, says Curvo’s designer, Ezra Feldman. “Over time this will result in injury.”

While instances of injury with guitarists is rather rare, Feldman does have a point. The guitar was designed primarily around the fact that it required a straight fretboard with taut strings hovering over it. Remove the strings and you’ve removed the one barrier that’s stopping you from making the guitar more ergonomic. With the strings gone, Feldman was allowed to curve the fretboard, allowing your hand to move much more freely in an arc shape, so your elbow and wrist don’t have to do much of the work. This shifts the movement to your shoulder, reducing the strain on your wrist and your fingers from having to stretch and contort in weird shapes while you play. 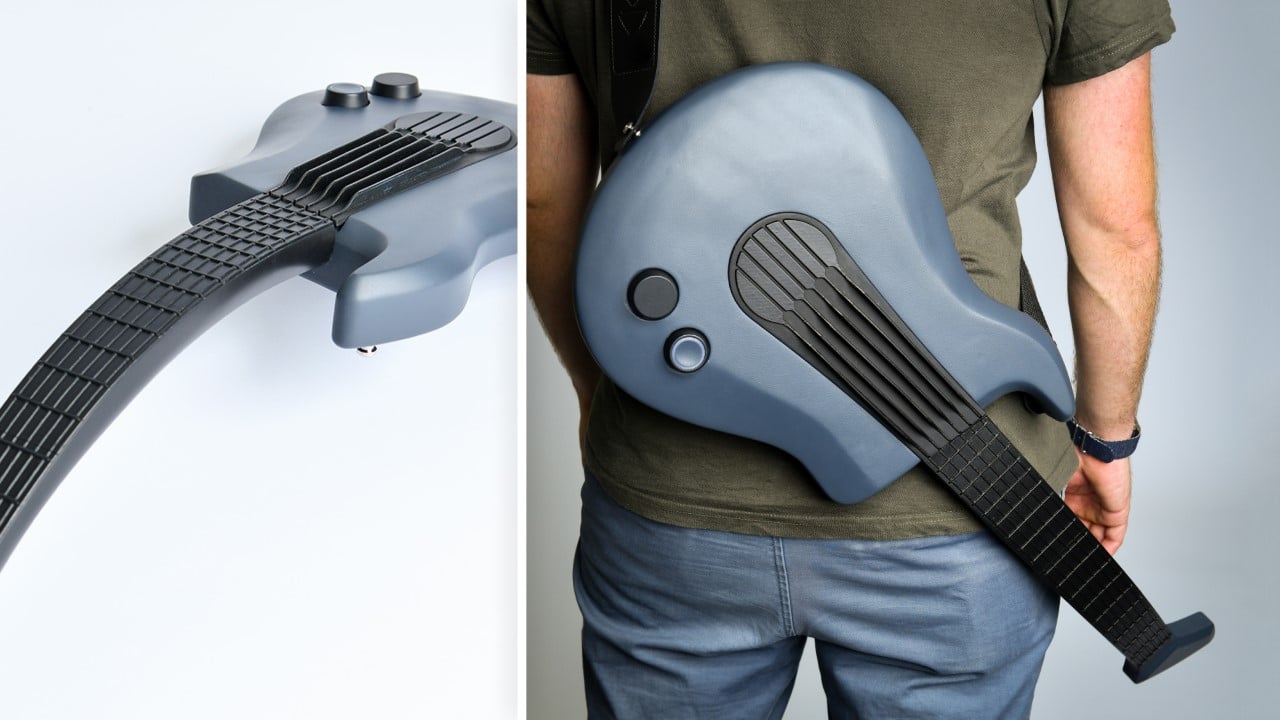 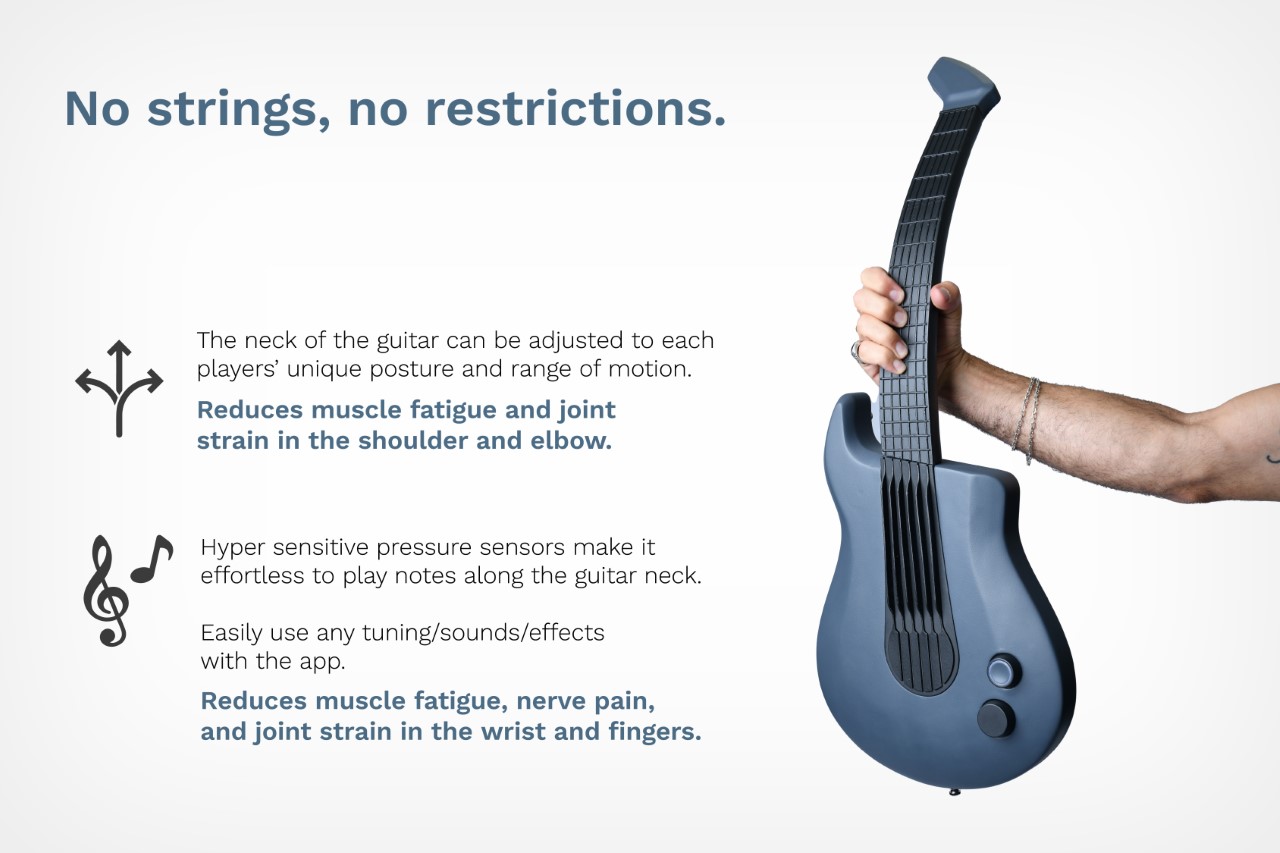 Without strings, the Curvo is free to be a much more unique instrument. Rather than relying on electromagnetics and acoustics, Curvo uses sensors to detect which ‘string’ you’re pressing with your left hand, and strumming with your right. sensors built into the entire length of the guitar pick up on a variety of cues, from which string you’re pressing to how hard you’re pressing it. On the right side, velocity sensors capture the intensity of your picking or strumming, as well as which strings you’re plucking away at. All this data is then used to generate audio that corresponds to what you’re playing. Another major benefit of not having strings? The Curvo doesn’t need any sort of tuning, and always stays in tune no matter what.

However, to retain the kind of control you’d get from an electric guitar, the Curvo also comes with a set of knobs on the right to modulate effects and volume. 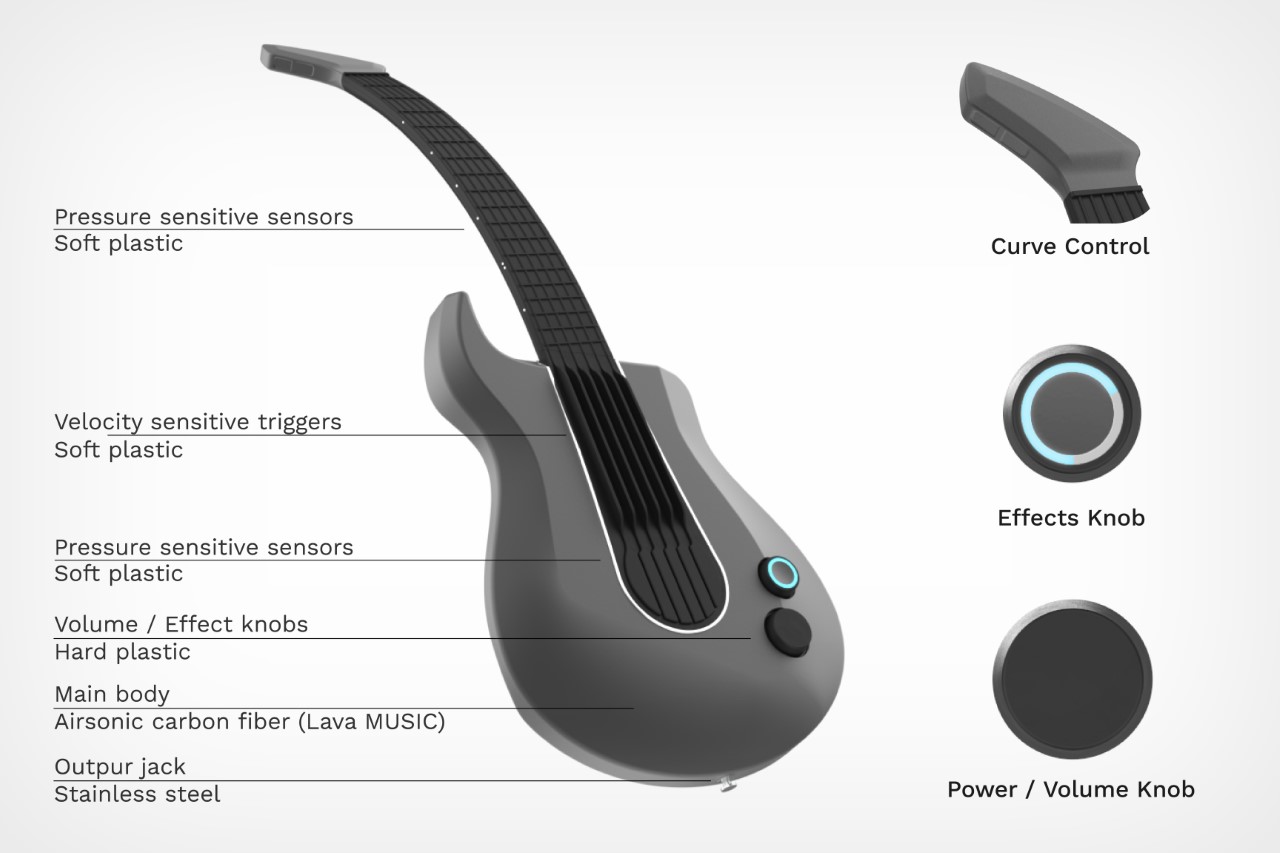 The way Curvo is constructed is different from your average guitar. While most guitars use wood or composites, Curvo uses Airsonic carbon fiber (like the one found on LAVA MUSIC’s guitars). It also uses soft plastic all along the fretboard, almost mimicking Roli’s Seaboard, and actually allows you to adjust the curvature of the fretboard depending on your own personal anthropometrics and your comfort level. For example, people with shorter arms will need higher curvature as compared to people with longer arms. 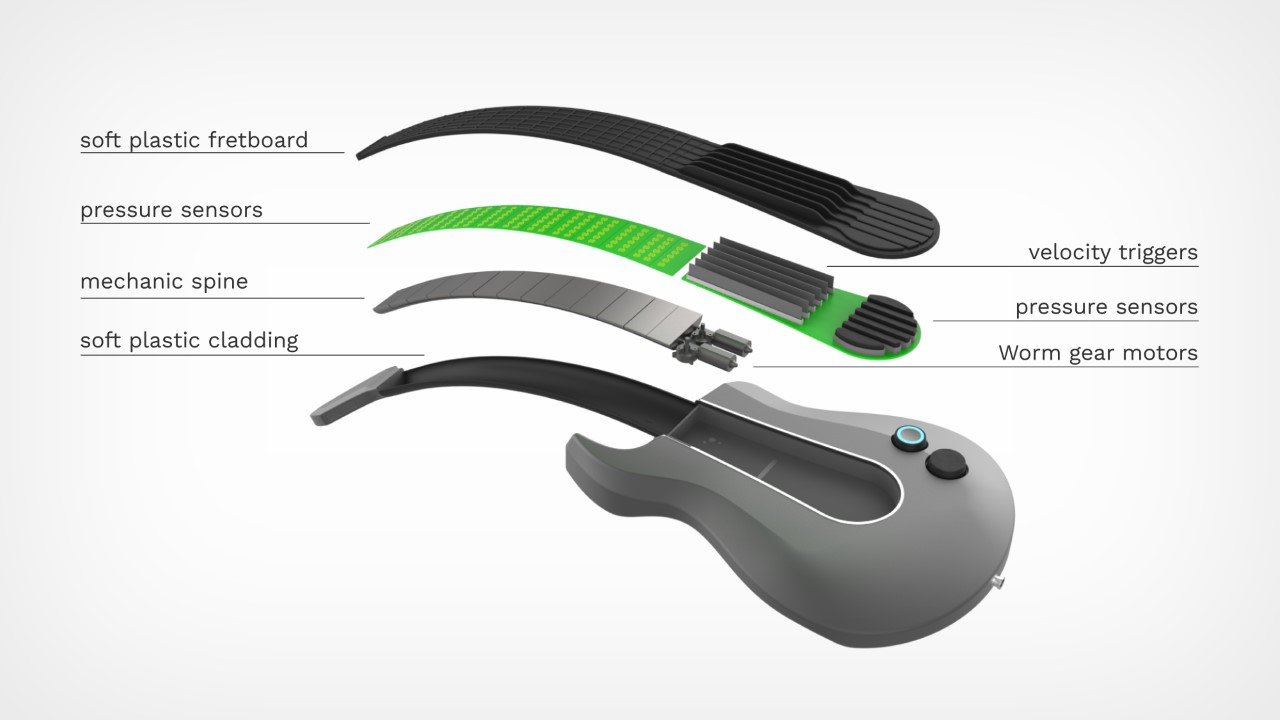 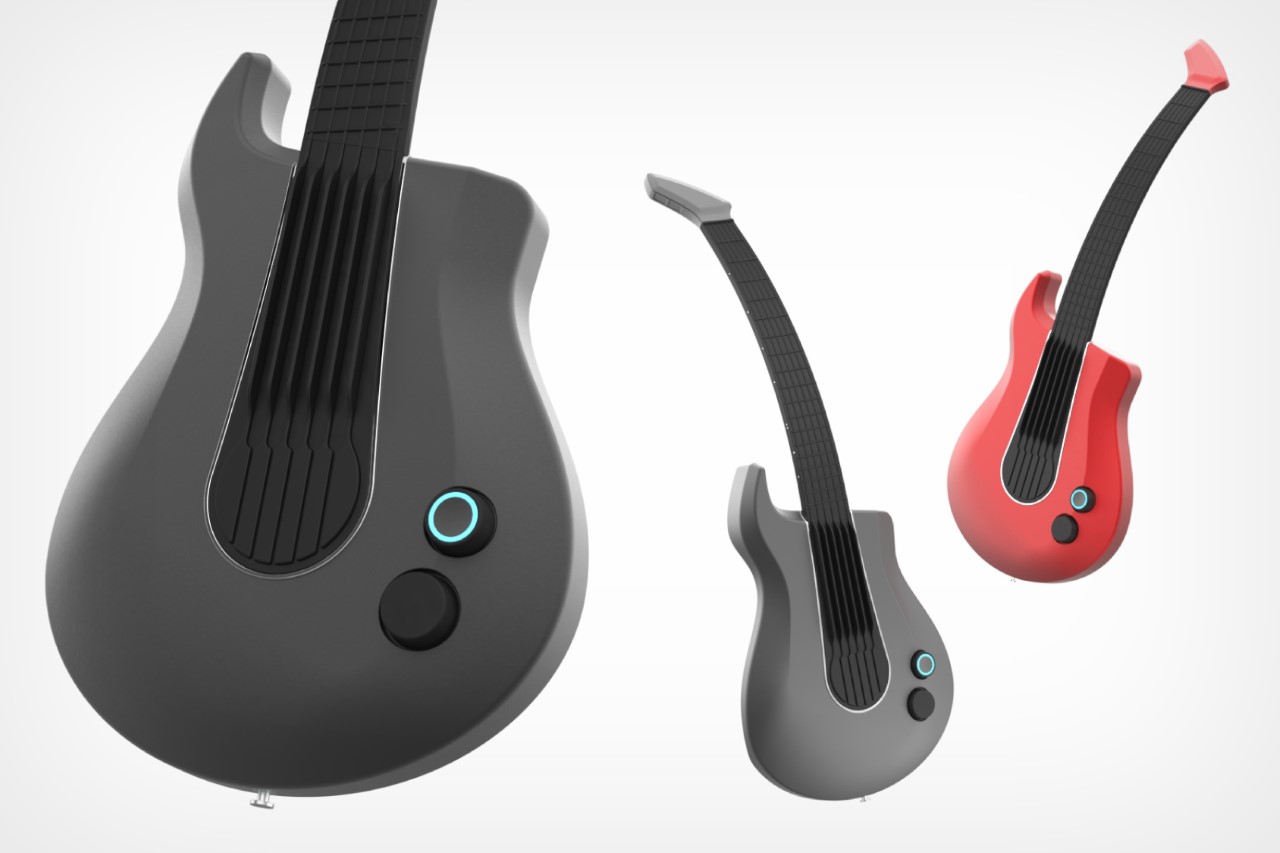 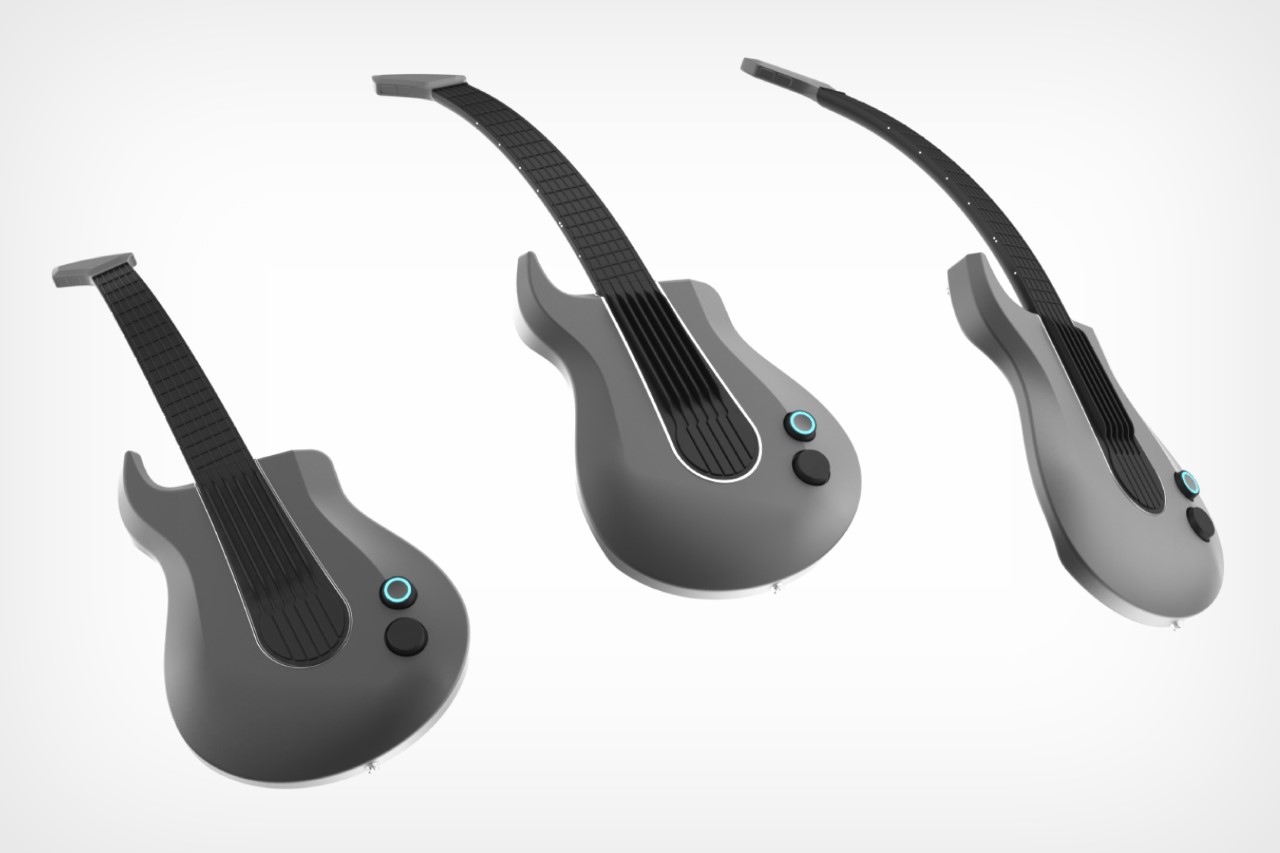 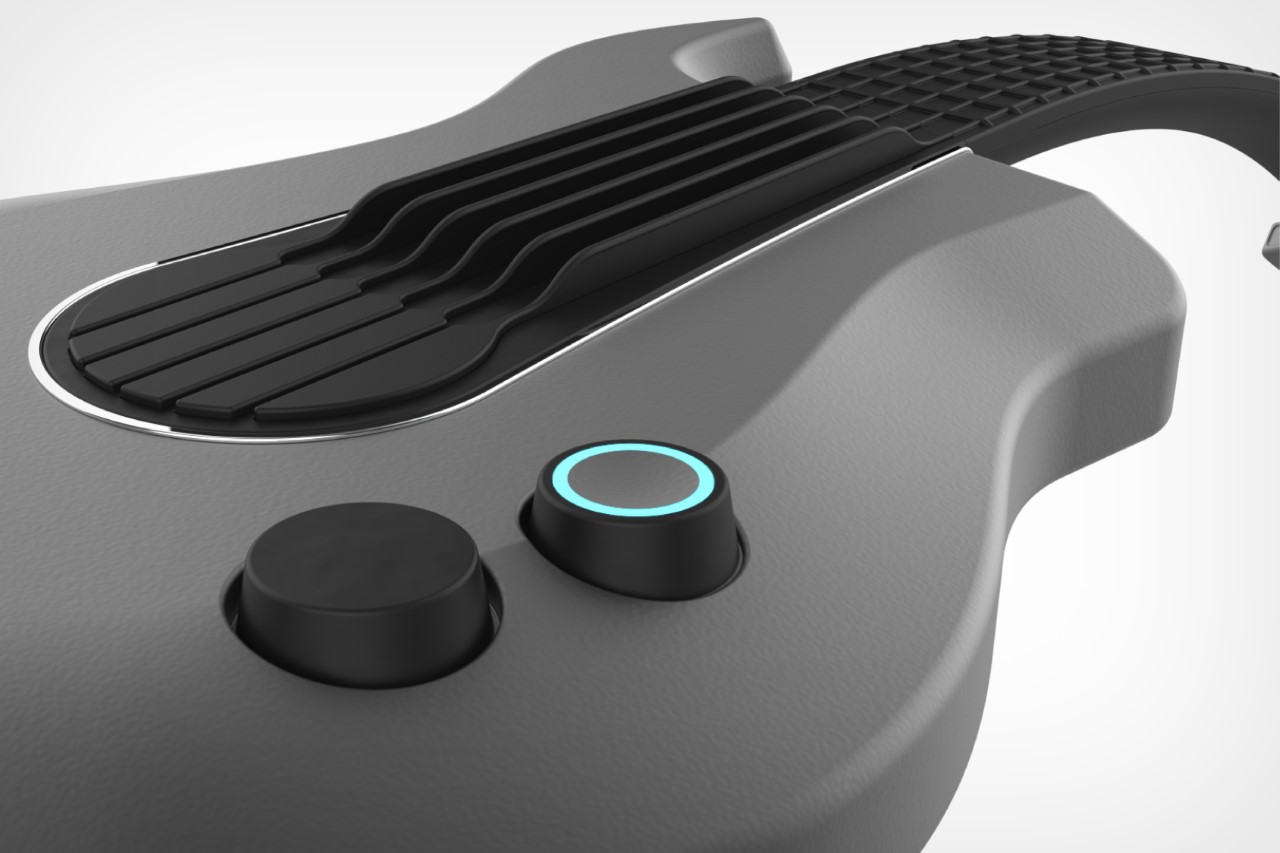 Given its electronic nature, Feldman also seized the opportunity to unlock Curvo’s true potential by making its sound infinitely customizable. Just like an electronic MIDI keyboard can pretty much play any sort of sound, Curvo can be programmed to play any sort of sound style too. Its app gives you access to a massive sound back and effect rack, while even letting you remotely adjust your guitar’s tuning to suit your needs. Moreover, you can even record music right to the app, create layers, and produce full-fledged tracks right on your phone! 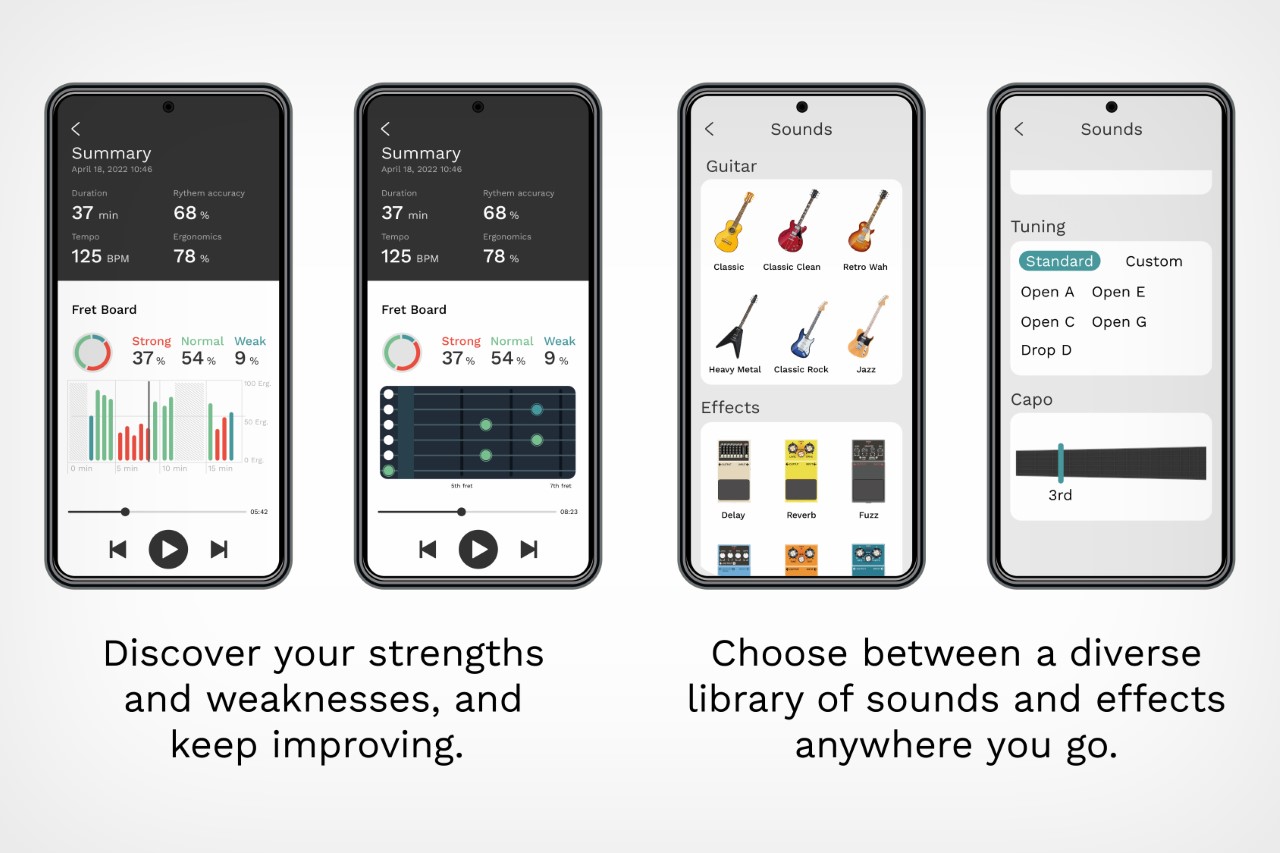 One of the latest trends in cell phone technology is the slider phone. This audio/video player brings that technology into new areas of the market….

Meet, Hologrampy! One part decorative novelty item, one part speaker… it gives your listening experience a boost with a stunning visual accompaniment. It uses the…