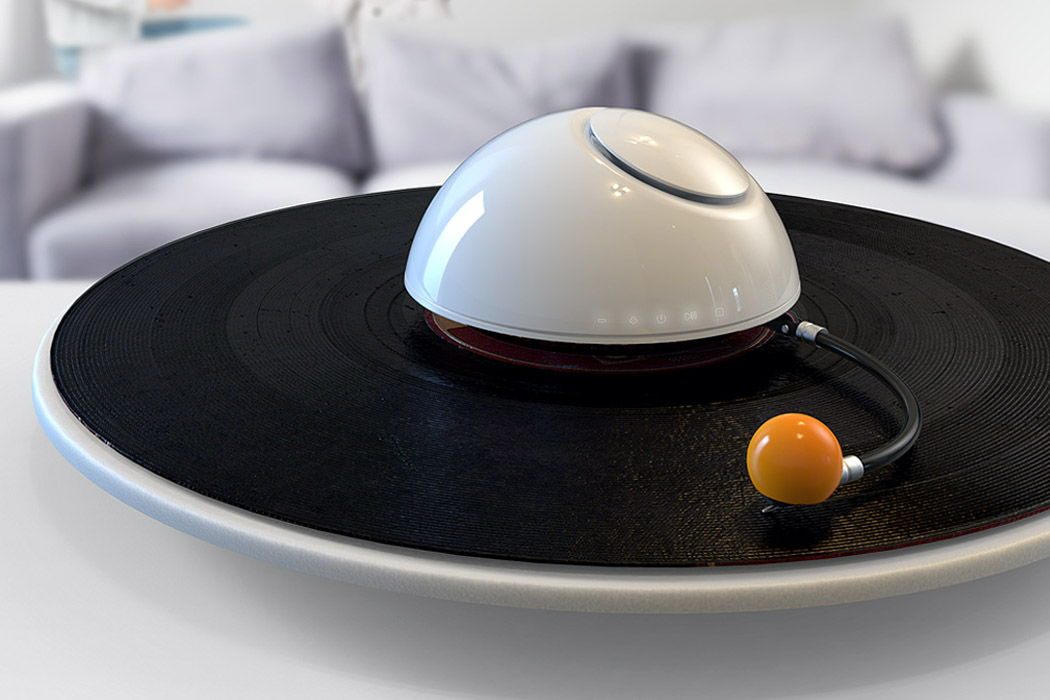 Vinyl turntables never seem to go out of style! They are classic collectibles that have reached iconic status. Any vinyl record owner or audiophile loves to showcase their beloved turntable. After all, they seem to wash everyone over with a wave of nostalgia. One glance at a turntable, and you’re taken on a trip down memory lane, and a very retro one that is. Hence designers have been exploring when it comes to turntable designs, and we’ve curated a collection of exciting and innovative ones!

Saturn is a beautiful vinyl record player inspired by the planet Saturn, its rings and its moon Titan. It comprises of a black turn-table platform, which will subtly remind you of Saturn’s rings. Placed on top of the base platform is a spherical speaker or the upper hemisphere of the entire structure, which is what the planet Saturn would probably look like if viewed from the top. Attached to the sphere is the tonearm, and the end of the needle has been inspired by Titan!

Introducing o-ton, a vertical, wireless turntable that lets you import and digitally enhance your vinyl records. It’s almost entirely translucent, so you can see all the inner workings and, of course, your vinyl’s unique cover art. The design features a digital stylus that automatically turns your device on if you insert a vinyl. With an integrated optical sensor, the stylus can identify and jump individual tracks.

The SC+P Turntable uses the combination of high-quality materials, precision engineering, and a visually striking design to emphasize the state of the art components that reside within its body. The undeniably beautiful device is made up of a striking framework that draws attention towards the vinyl that sits at the center. The result of this skeleton-like form is the exposure of the mechanics and electronics that allow the device to function.

Titled the Kozmophone, this alternate-reality gramophone takes one of Edison’s greatest inventions and gives it multiple upgrades, including a miniature holograph projector that brings back the visual joy we associated with Windows Media Player’s visualizer graphics before online streaming took over. The avant-garde gramophone comes with a slick, glossy, cutting-edge design, featuring an Audio Technica AT 91 cartridge and belt-driven turntable with built-in vibration damping. 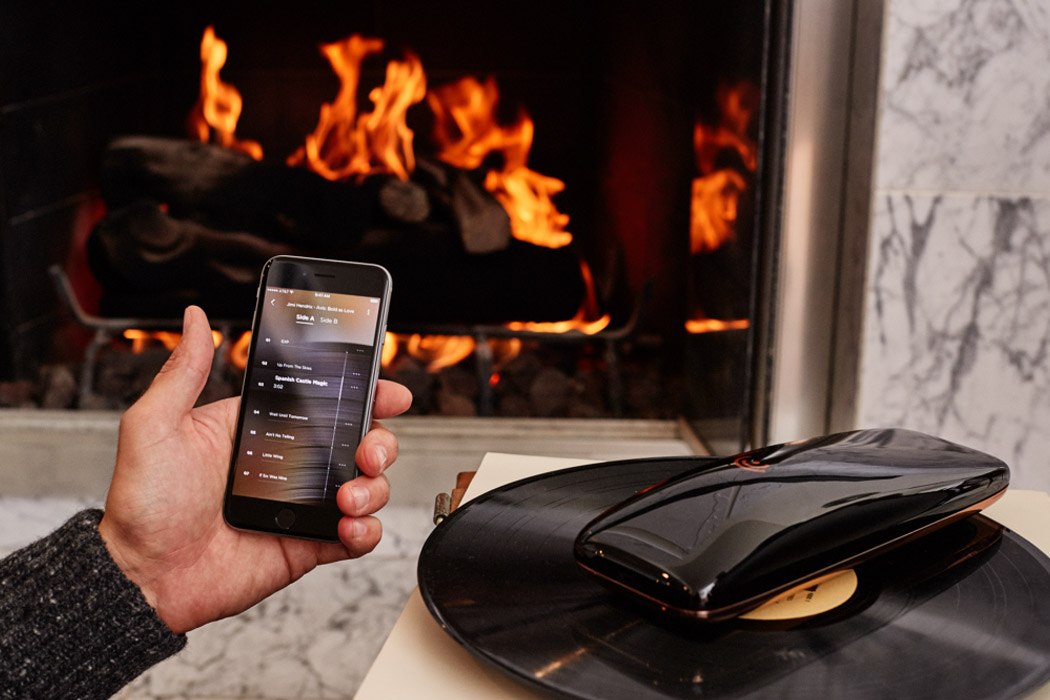 LOVE is a premium, smartphone-controlled record player that you can use with the support of an app or without. It reads records utilizing a traditional stylus or can be connected to Bluetooth and WiFi. You can use your smartphone to play, stop, repeat and skip records, and even select different RPM speeds. It is said to be the world’s first intelligent turntable!

Echoing the vinyl disc’s gentle concentric carvings, the Barky turntable’s base has something similar, but something that has been around for millennia. A cross-section of wood taken from an ash tree, the Barky’s base has wooden age-lines that match perfectly with the shape and nature of vinyl, creating something that looks absolutely surreal as you begin to notice the biomimicry of sorts.

The turntable itself is a rather retro/hipster product and using concrete in the Enso only makes it more kitschy and cool. With its imperfections, concrete gives a different flavor to a product that has otherwise only seen the use of plastic, glass, metal, and wood. Designed with a simple rounded form that highlights the vinyl disc platter and arm, the Enso comes with a rather integrated form and the only thing breaking it is the walnut wood control panel which juts out to end the monotony and play with one’s visual expectation of continuity.

We love a cool vinyl turntable, and Gearbox’s Automatic Turntable MkII is as cool as it gets! Inspired by Dieter Rams’ 1955 Braun PC 3 SV record player, you can actually observe the inner workings of the transparent turntable. Yes, you heard that right, it’s transparent! Not to mention it’s the perfect culmination of retro meets future. However, one of its most exciting features would be the turntable’s high-fidelity built-in valve phono stage, making it the first turntable in the world to actually have one! 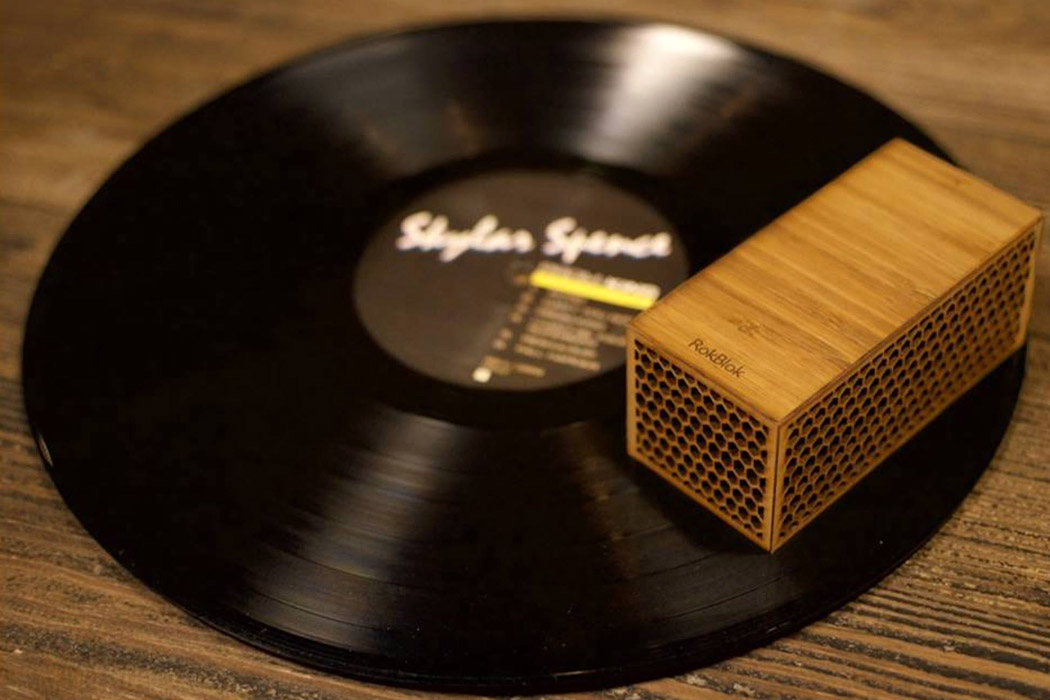 The RokBlok by Pink Donut isn’t your conventional vinyl record player! It’s the world’s smallest, wireless record player. You simply place the RokBlok upon your favorite record and listen to your favorites tunes anytime anywhere. It functions as a turntable without actually looking or being one, intriguing right?

Designed to be a DJ console that offers incredible amounts of control to the person behind it, Whiteout features a base with multiple grooves and a series of knobs you can place on them. The knobs work both as rotary-controls as well as sliders, while the base itself lights up with a minimalist interface. A pair of grooved circles on the base act as the turntables, while touch-sensitive controls on the top let you play, pause, loop, transition, solo, and mute tracks.

Hospitals are a daunting and unfamiliar environment that can be especially intimidating for young children. Having a product that makes the situation a little less…

Hair is a Sustainable Material

Wait WHAT? Cue GaGa’s monsters in 3, 2, 1… because these are for real. It’s a collection of fashionable eyewear exploring the potential of human…

2020-21 has ingrained in me an age-old adage my mom loves to quote – health is wealth. Focus on our healthcare and the strain on…

Gosh I love objects with a multi-purpose! Some things in our lives really should be multi-purpose eg. the TV, it really is just a screen…