Small box. Big picture. That’s pretty much all there is to say about the new Philips Screeneo U4 short-throw projector. The tiny shoebox-sized gadget sits against any wall, casting a stellar 120″ display on command. With a Full HD 1080p output, HDR10, 2.1 stereo speakers, and a remote control for navigating through your favorite titles, the Screeneo U4 is the closest you could possibly get to having your own personal cinema in your living room. The only thing missing from this equation is a tub of popcorn. 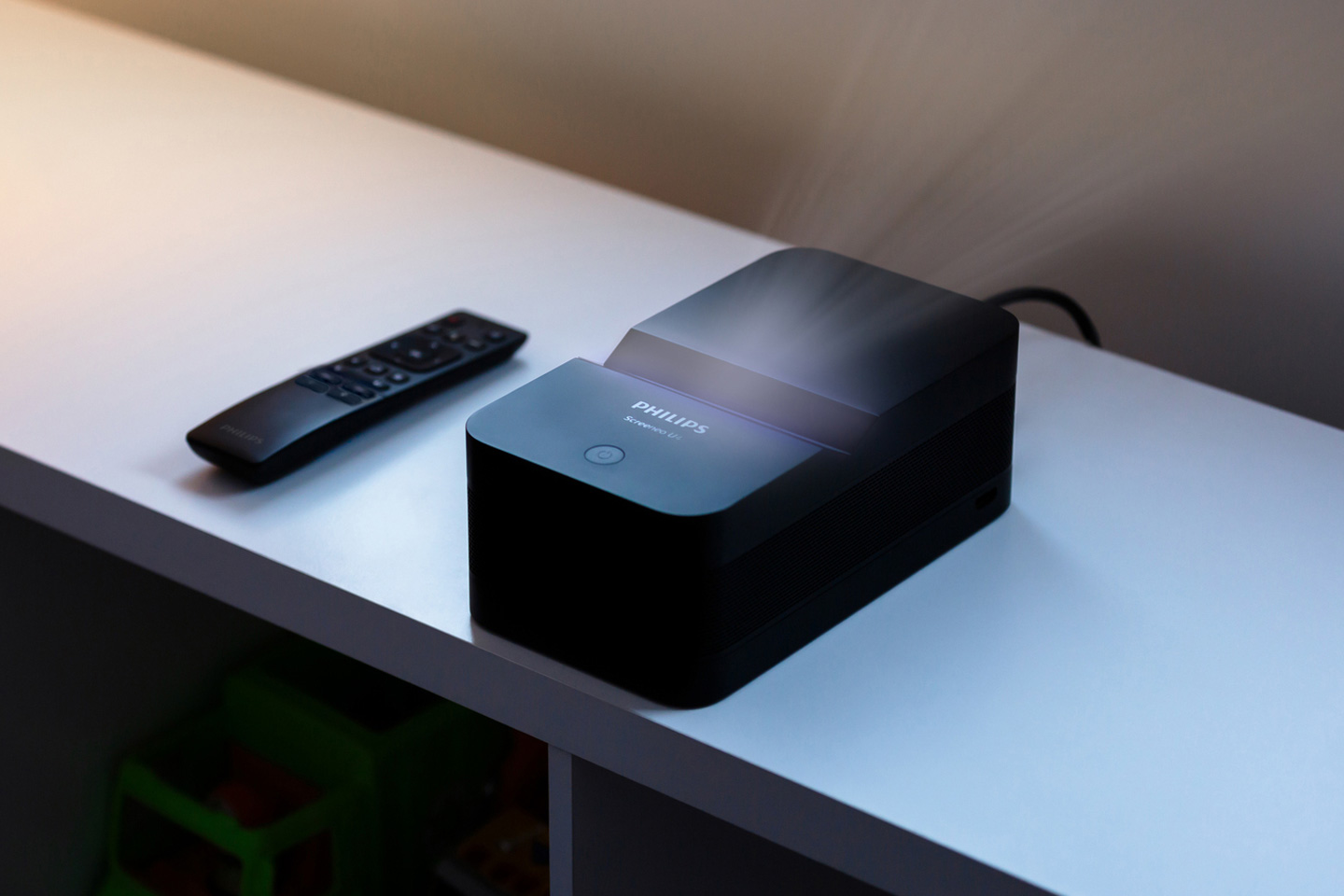 Labeled as an Ultra Short Throw projector, the Screeneo U4 is designed to be placed near walls instead of away from it. With a casting ratio of 0.25:1, the Screeneo U4 can project a massive 80-inch display on a wall when kept just 12 inches away from it. This effectively provides two benefits – firstly, the projector can easily be connected to a nearby power outlet because it’s kept so close to the wall, and secondly, you never have to worry about people blocking the projector every time they stand up to go to the kitchen or grab another beer. 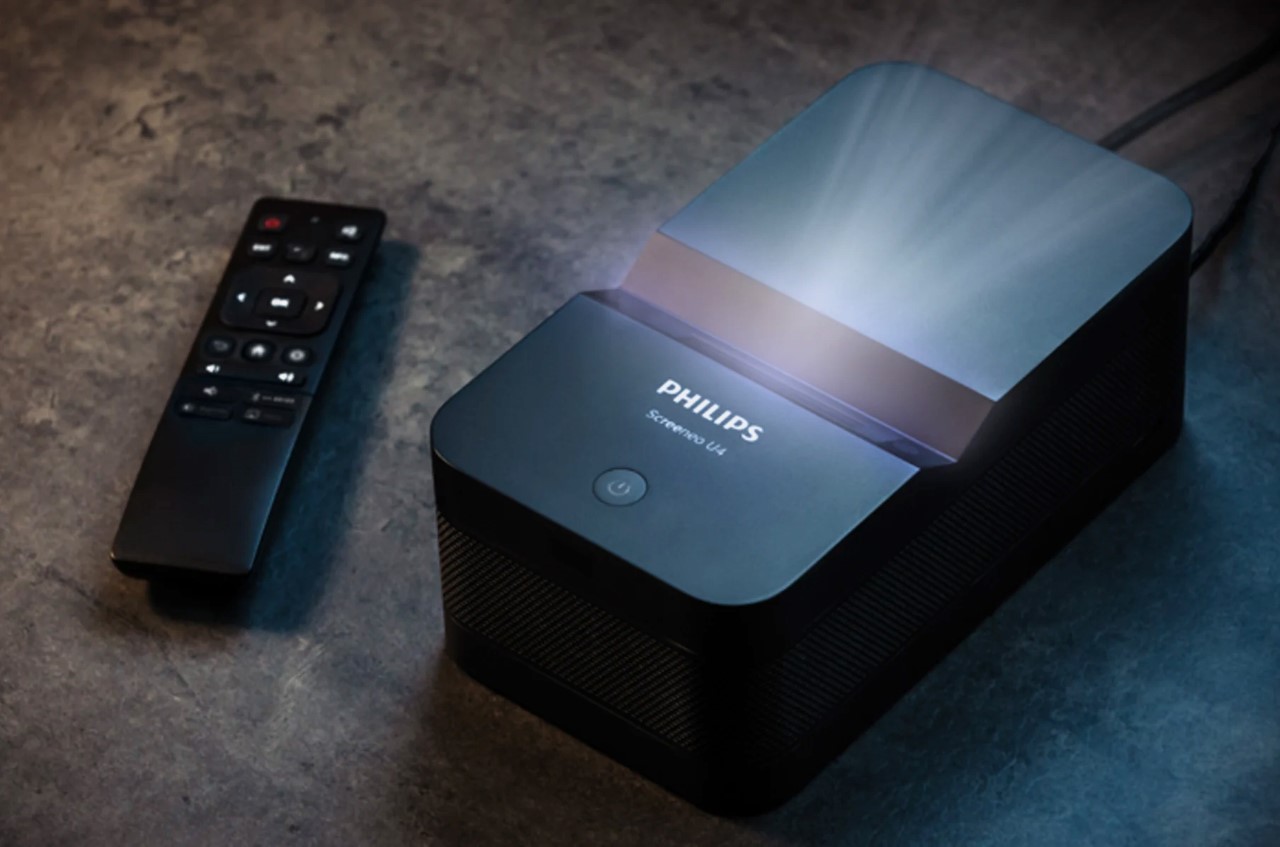 The Philips Screeneo U4 is the fourth version of the company’s ultra short throw projector line. In its smallest avatar yet, the gizmo measures a mere 8.8-inches long and weighs 3 pounds. However, it packs a fair punch in the projection department, with 1080p capabilities, automatic focusing and keystone, HDR10, and a respectable brightness of 400 lumens which should work rather well in a dark environment. 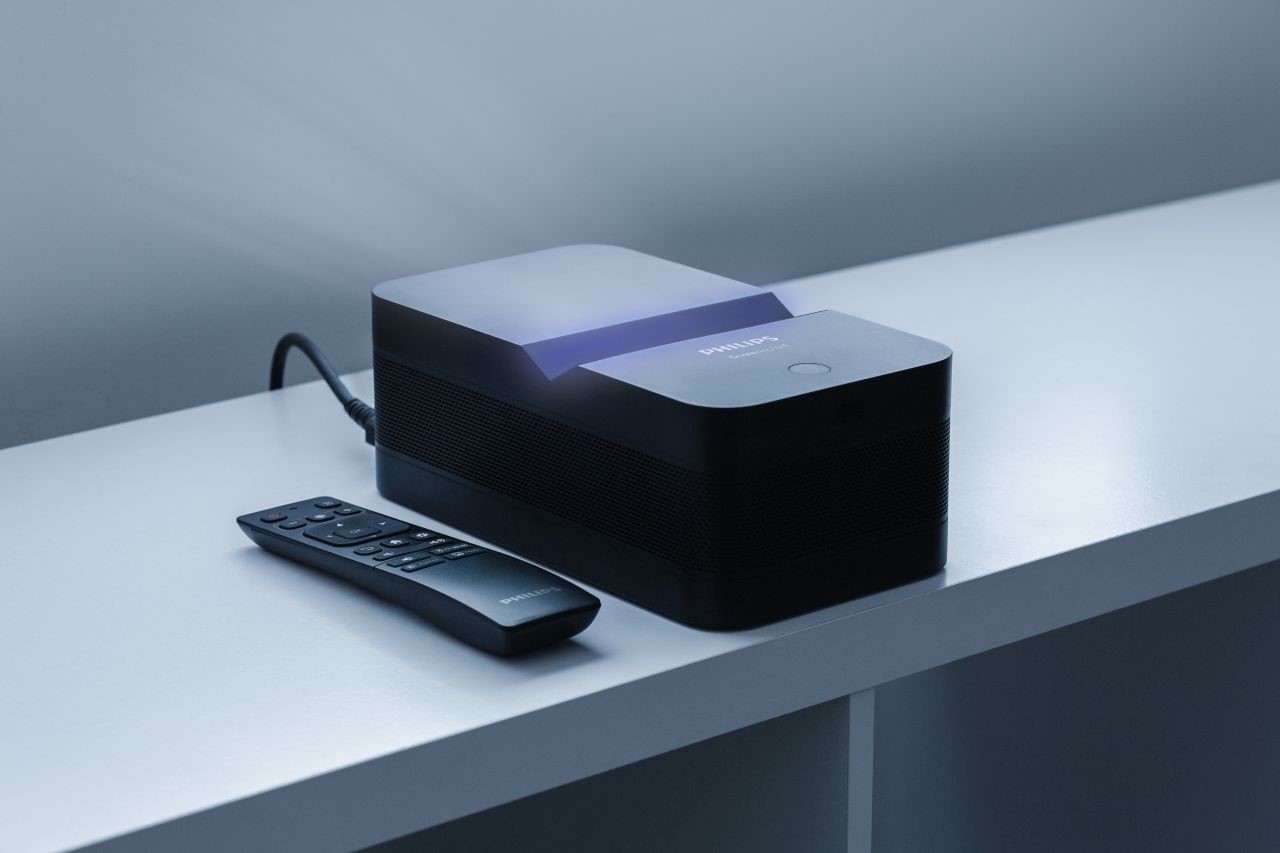 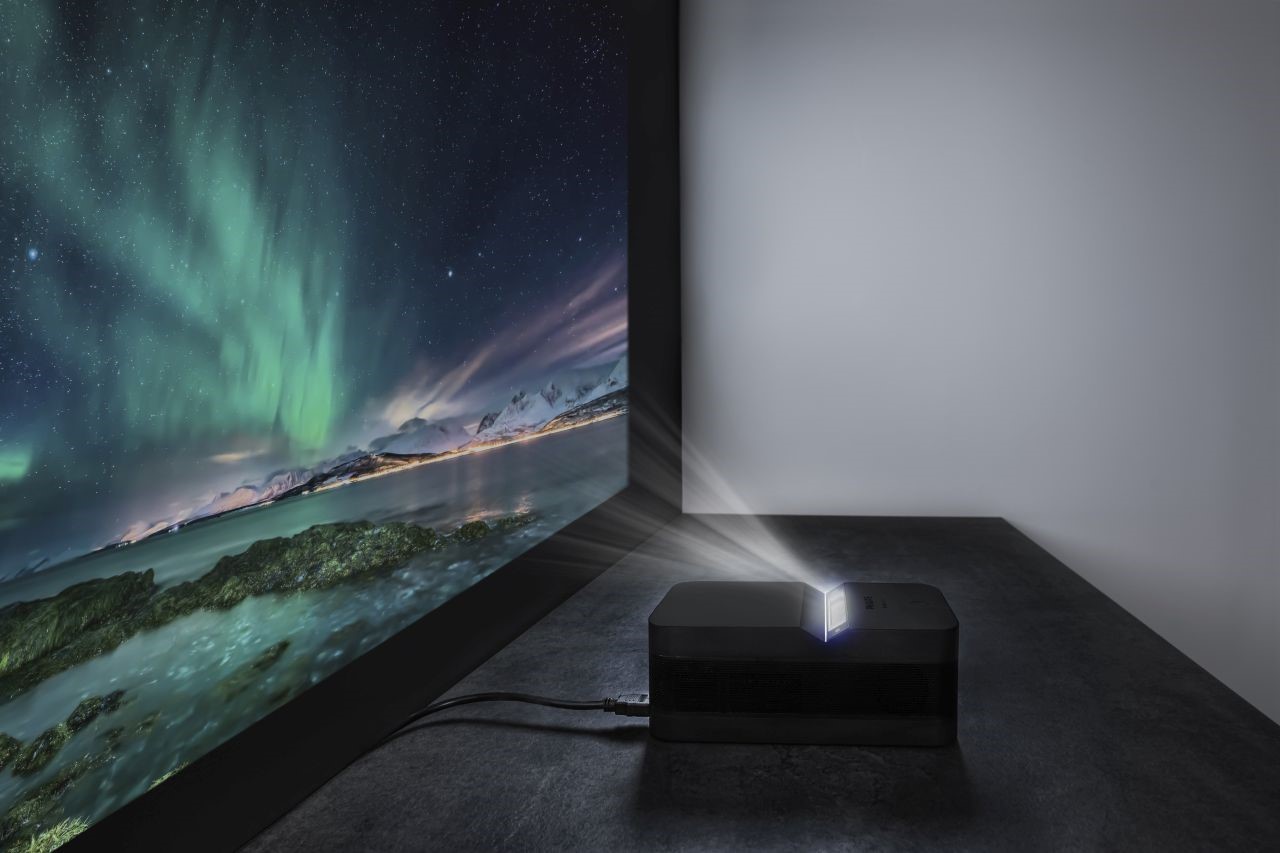 The Screeneo U4 comes with its own built-in 15W stereo speakers that give a television-like experience with audio coming from the source of the video (unlike projectors that need to be connected to independently located speakers). However, the U4 does sport Bluetooth 5.0 which lets you hook your earphones or wireless speakers to the projector for a much more customized experience, and there’s even a 3.5mm jack available if your home theater is much more traditional and wired. 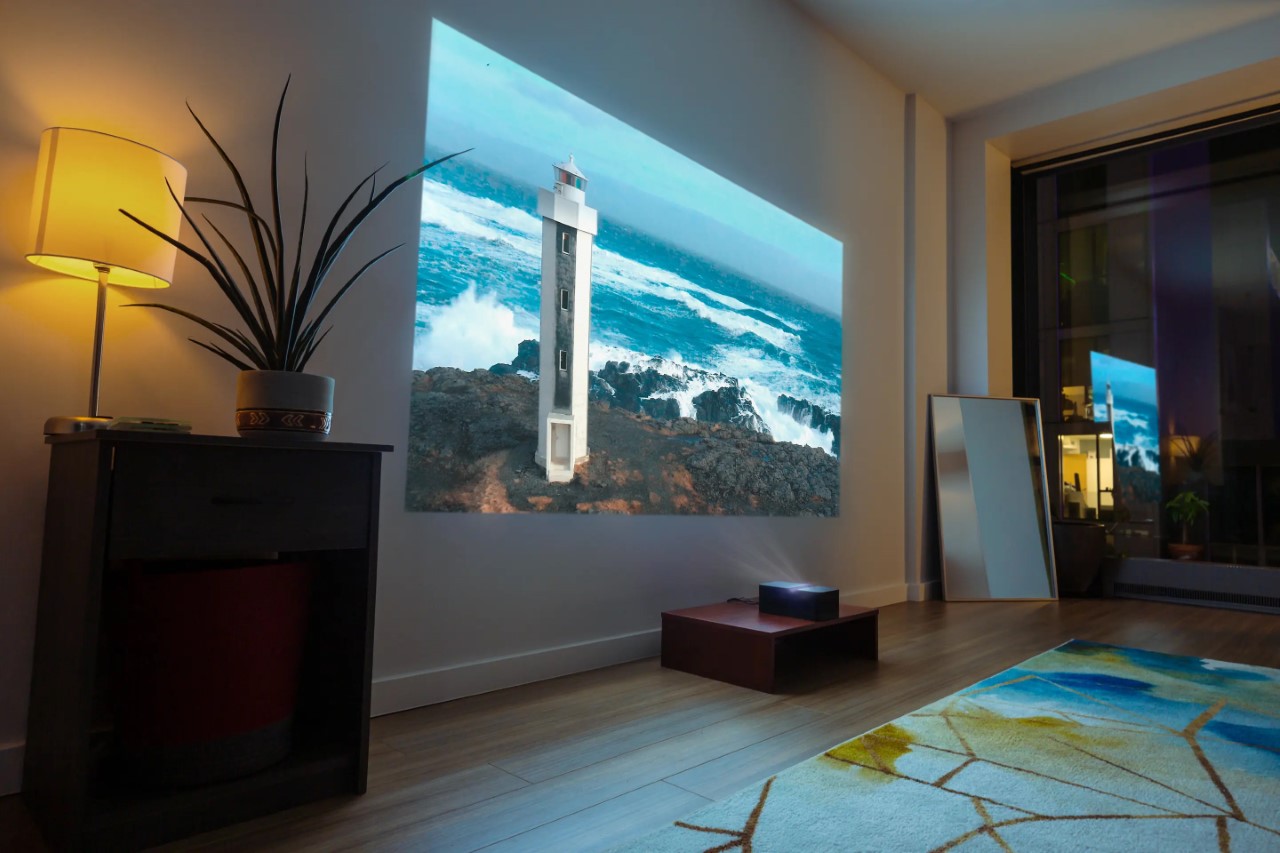 The only conceivable disadvantage here is the lack of ‘smartness’. While it’s expected that most projectors today come with a built-in OS that supports your favorite streaming platforms, the U4 doesn’t quite have that. It does, however, let you plug a Chromecast/Fire Stick or input device via the HDMI port, or even via the USB-C port, and the U4 also has dual Bluetooth, which means you can use one Bluetooth channel for your speaker, and another Bluetooth channel to beam videos directly from a phone/tablet to the U4. You can then control playback via the remote control that comes along with your U4. 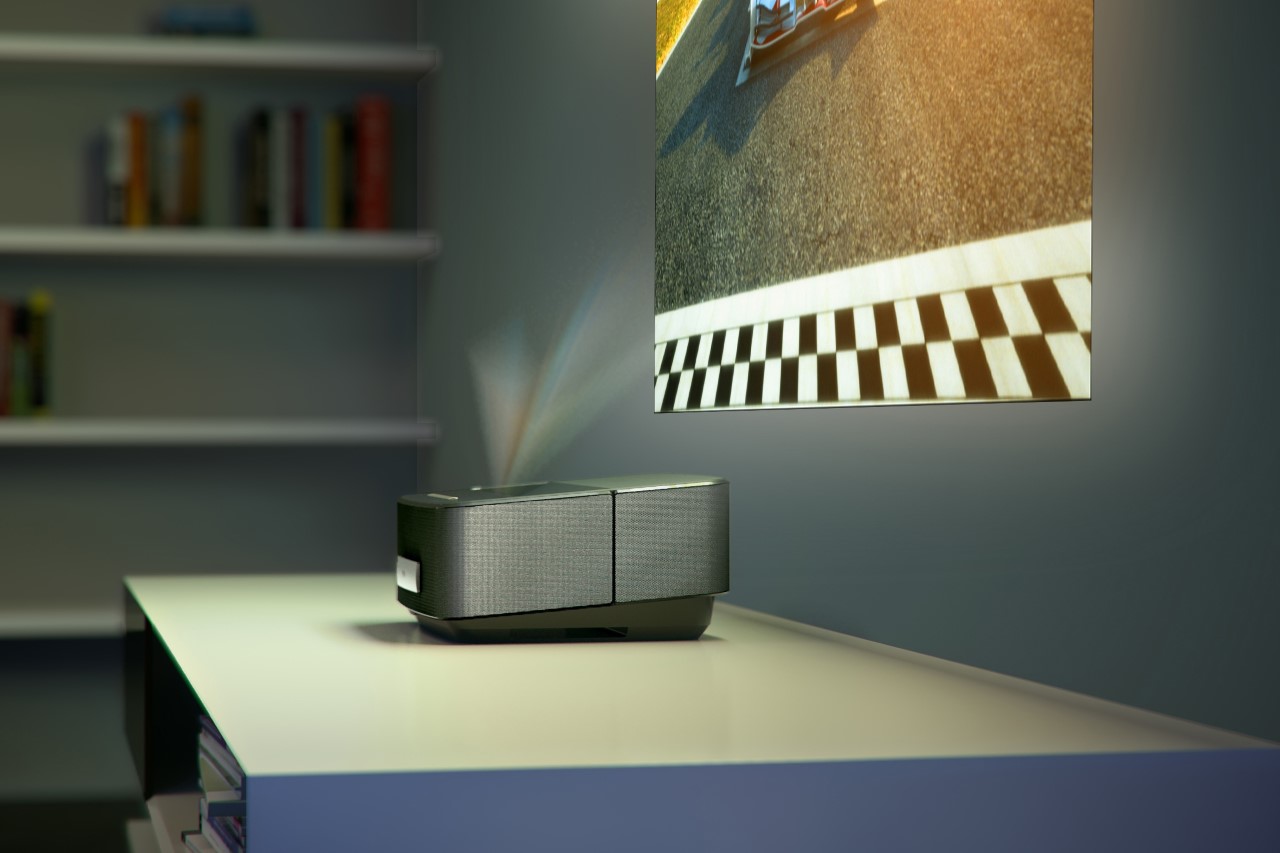 The Screeneo U4 is currently being crowdfunded on Indiegogo – a route that Philips is currently testing to help develop new products and deliver them directly to enthusiasts. Before this, the company crowdfunded the Philips PicoPix Max – a 1080p pico projector. While there’s always an inherent risk with crowdfunding, one could argue that Philips has much more brand value than most campaign creators, so rest assured your money is in reliable hands. To sweeten the deal, however, Philips is offering a sizeable 45% discount to its backers by letting them procure the Screeneo U4 for a reduced price tag of $659 USD (€649 EUR). The Screeneo U4 comes with a 2-year warranty and begins shipping in October of 2022. 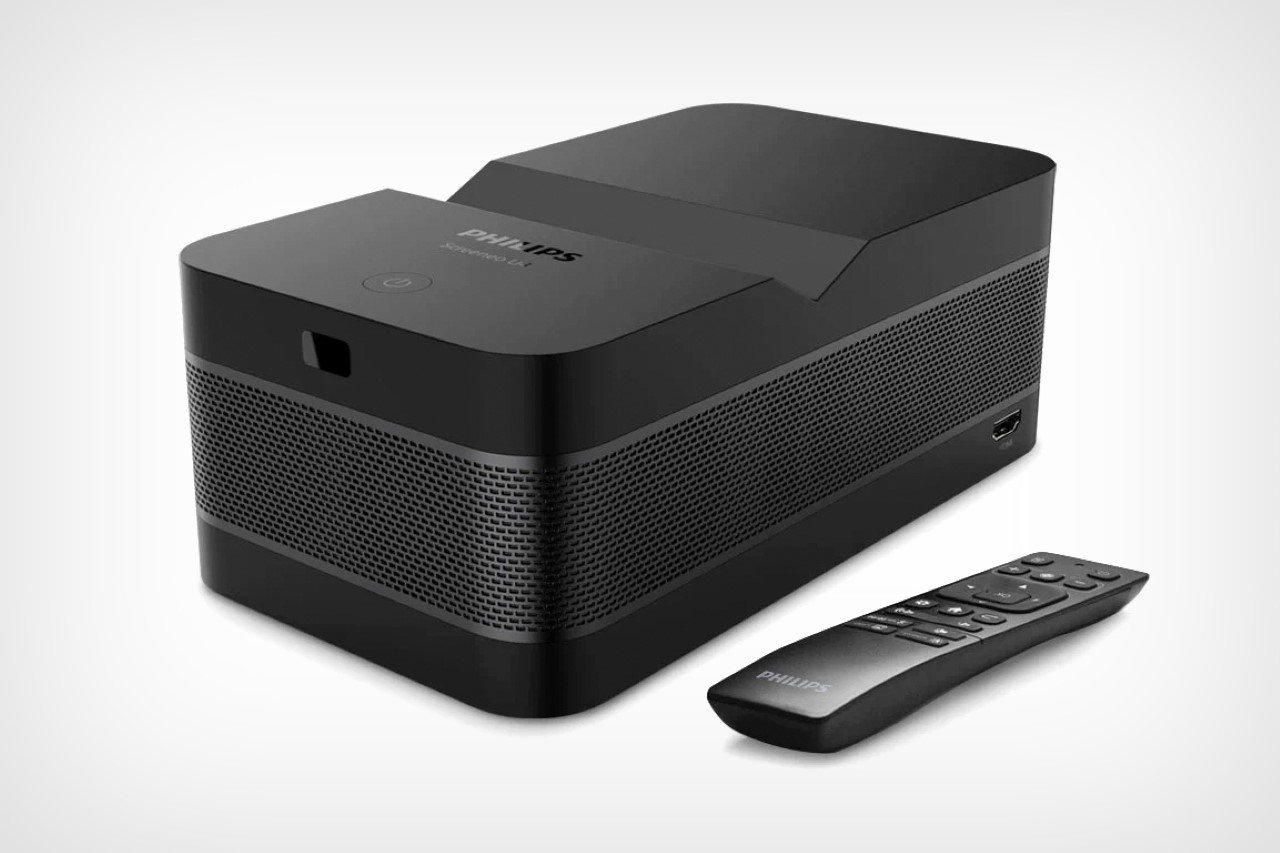 Toys that are as Flexible as your Creativity

https://www.kickstarter.com/projects/bokahblocks/bokah-blocks-wooden-construction-toy-the-explorer UPDATE: less than 24 hours left on their campaign! There’s nothing more flexible and expansive than a child’s creativity. Over the years, education chisels…

https://youtu.be/3OInkITS-80 Tooletries will make sure you never see an electric drill in your bathroom again. Using any flat, smooth surface, the Tooletries Mighty Toothbrush Holder…

Turn any object into a wireless speaker using this sleek bone-conducting audio device!

https://www.kickstarter.com/projects/692076889/blade-speaker-the-thinnest-bone-conduction-speaker Have you ever tried to call out to someone standing far away, only to find yourself instinctively cupping your hands to make your voice…

The soul of a motorbike in the body of a bicycle

Designed to be everything from your primary mode of transport, a recreational two-wheeler for adventures, to your last-mile commute device, the Maxfoot dons many hats….