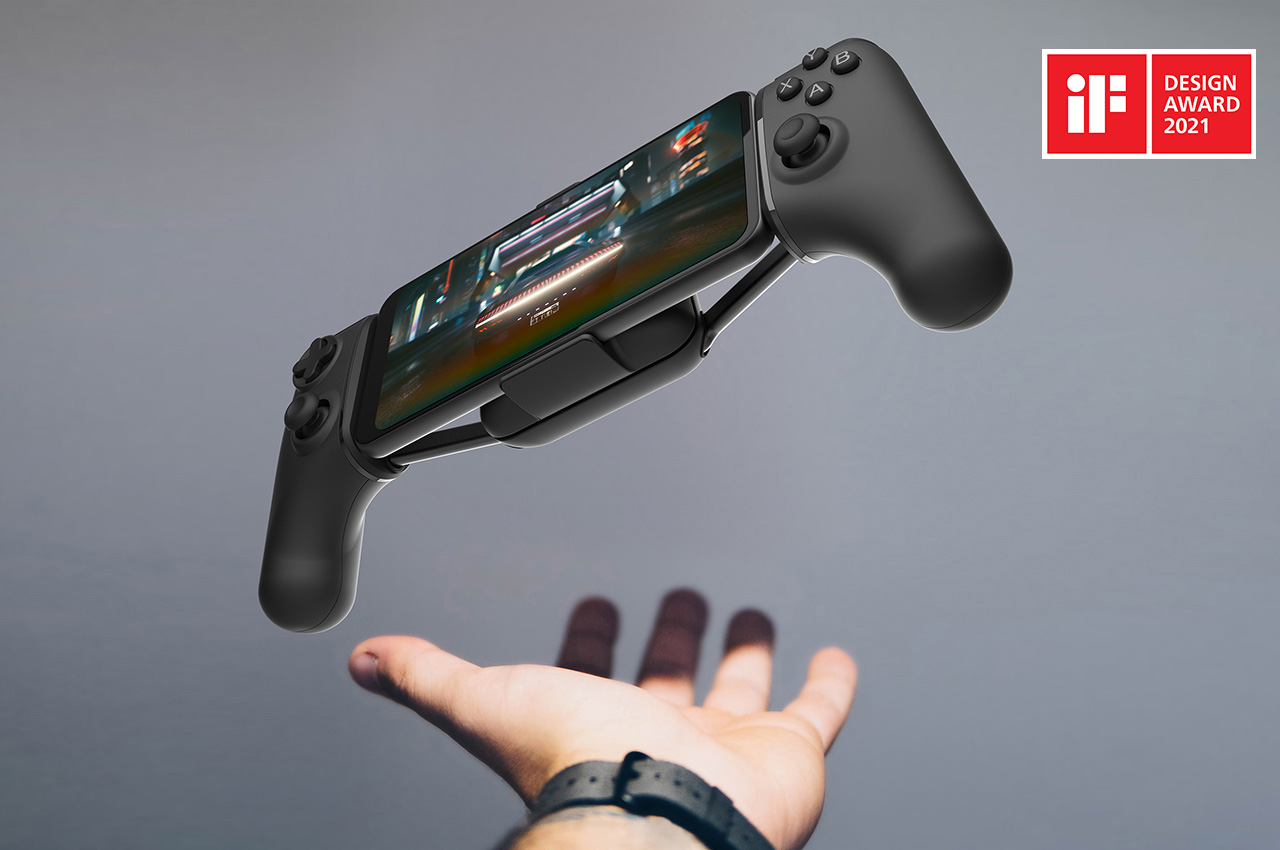 The iF Design Award has been consistently hand-picking the best, most innovative designs since 1953, honoring top-class achievements in categories spanning Product Design, Transportation Design, Communication Design, Packaging, Service Design, Architecture, Interior Architecture, Professional Concepts, and UI and UX for 67 years in a row. The entire iF Design Award program saw as many as 10,000 submissions this year, which were evaluated by 98 international design experts from 21 countries, on the iF Jury.

Just this year alone, 1,744 designs received the iF Design Award for their creative accomplishments across various categories, while an additional 75 designs went on to win the highly-coveted iF Gold Award for their outstanding work. The iF Design Award always culminates in a grand ceremony in Berlin, although owing to the pandemic and global travel restrictions, award-winning products and projects this year are being celebrated digitally with an international content campaign encapsulated by the slogan “The CreatiFe Power of Design” in cooperation with popular design platforms and seven renowned design museums.

Over the course of the next few months, Yanko Design will be curating and featuring winning designs from this year’s program too – we’ve hand-picked ten award-winning designs from the ‘Consumer Technology & Entertainment’ category below (the list even features TWO iF Gold Award winners)! All the iF Design Award winners can also be viewed on the newly-launched iF Design App that gives you access to a grand database of award-winning design projects and their creators, right at your fingertips!

To view all these designs and many more, visit the website of the iF DESIGN AWARD. 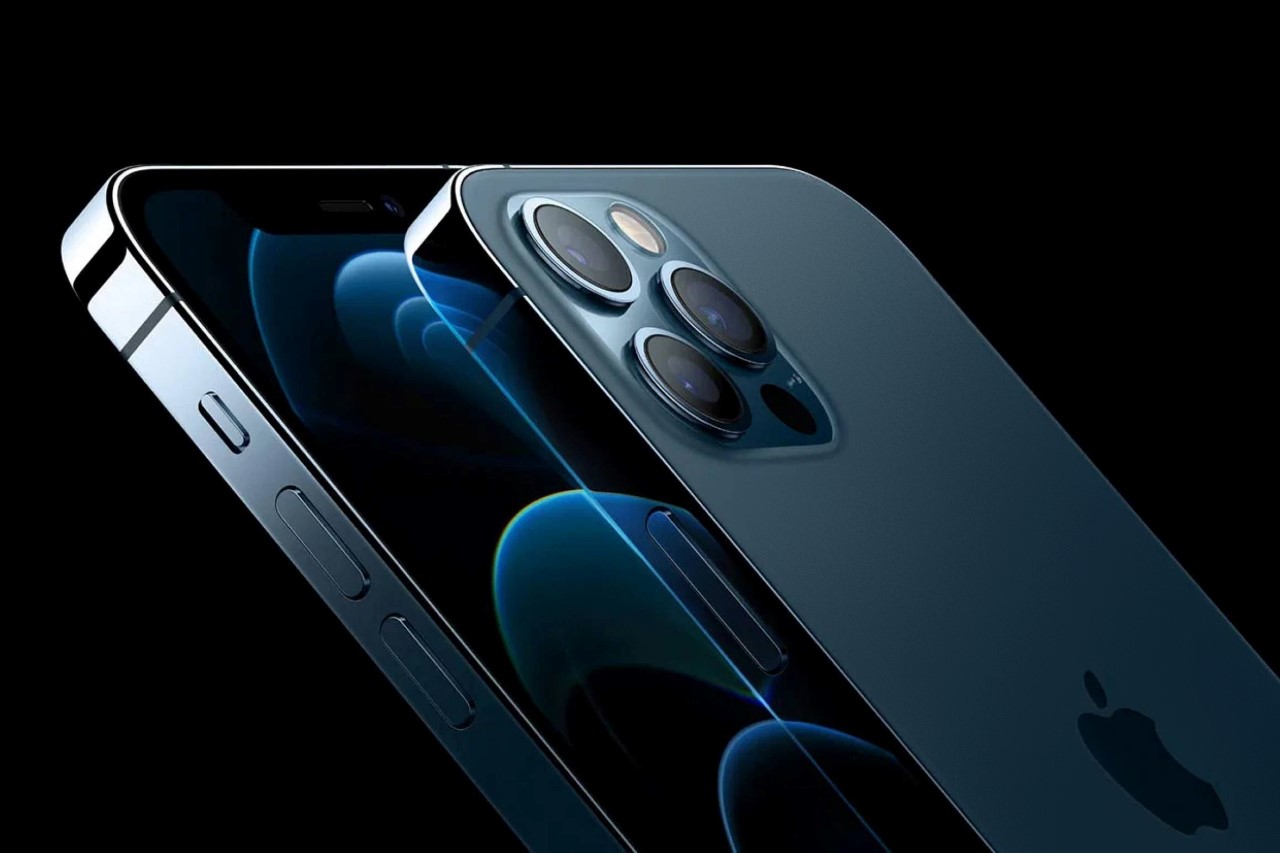 Last year’s iPhone is this year’s winner of the iF Gold Award. A remarkable smartphone by even this year’s standards, the iPhone really holds up its own to other flagships. The phone debuted just in time to enter into this year’s award, and made the cut for introducing radical new features like the 5G chip, the Super Retina XDR display, the cutting edge A14 Bionic chip, state-of-the-art computational photography, and obviously, MagSafe! 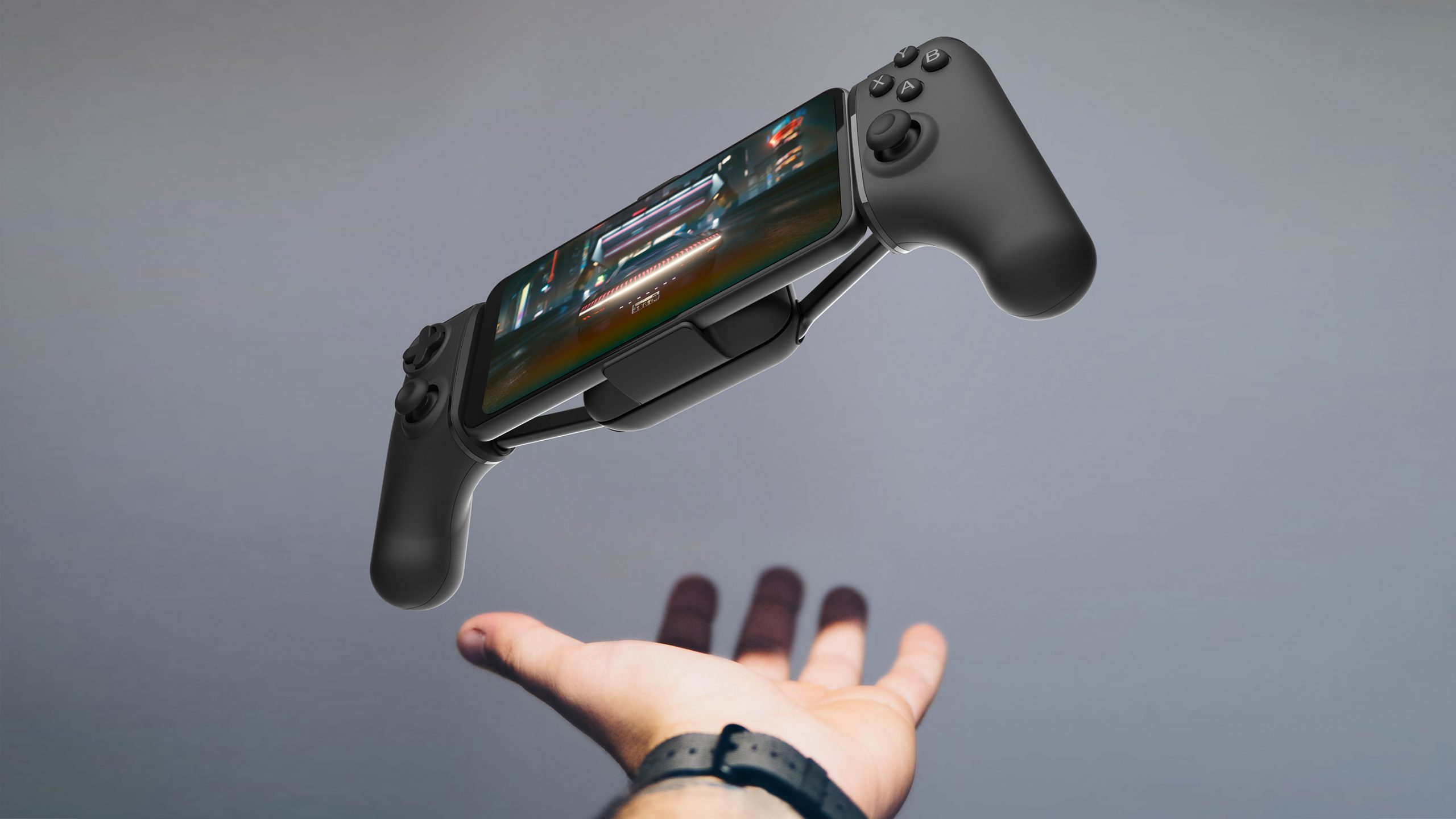 Designed for an era of gamers who are migrating towards the new echelon of cloud-based gaming, the Gravitation is a universal smartphone holder/controller that lets you game almost as if you were gaming on a console. Built out like a traditional ergonomic controller, the holder comes with 2 joysticks, a D-pad, four action buttons, and even 4 shoulder buttons. Its most interesting feature, however, is its ability to expand sideways (image at the top of the article) to turn into a makeshift steering wheel, allowing you to play A-list games across multiple genres… right on your smartphone! 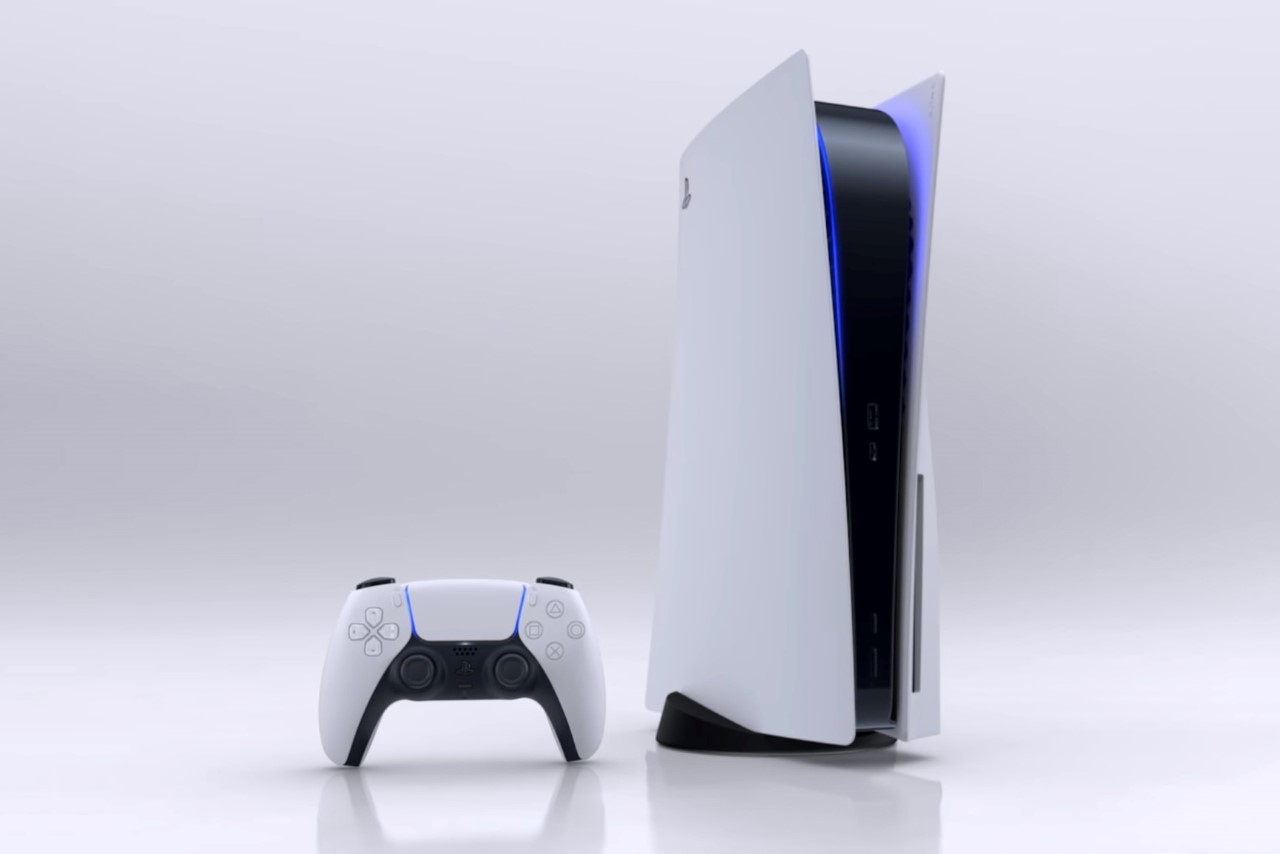 As polarizing as its organic, alien-inspired design may be, the PlayStation 5’s incredible demand really cements its reputation as the most popular gaming console of all time. The whole structure is designed to look as if it were formed by floating components, accentuating its slim appearance. On the inside, haptic feedback, adaptive triggers, and 3D Audio deliver deeper immersion, while the power of a custom CPU, GPU, and SSD is harnessed to rewrite the rules of what the PlayStation 5 console is really capable of. With a performance that’s out of this world, it helps that the PS5 looks otherworldly too! 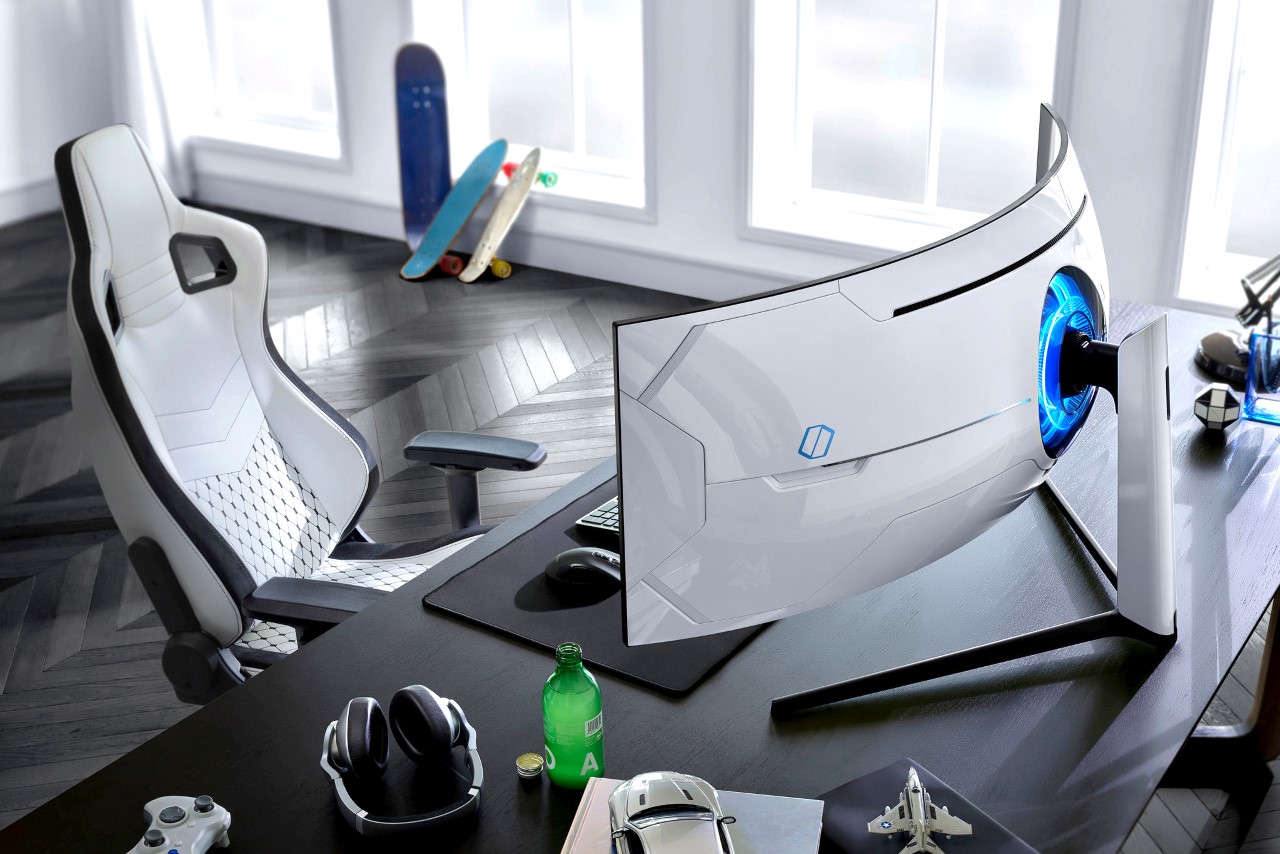 Having debuted in 2020, the Odyssey G9 still remains unmatched in exactly how bonkers top-of-the-line it is. The display measures 49-inches diagonally, and comes with a 32:9 aspect ratio that’s so ridiculously wide that it covers your entire periphery, giving you the most immersive gaming/working/computing experience you could ask for. Oh, and the monitor is curved too (with a 1000R curvature), allowing it to offer more screen area while occupying less space horizontally on your table. The monitor also comes with an ultra-fast 240Hz refresh rate and a 1-millisecond response time… and while the Odyssey G9 isn’t really 4K, it is the world’s first Dual Quad High-Definition monitor (basically the equivalent of eight 720p screens arranged in a 4×2 layout). 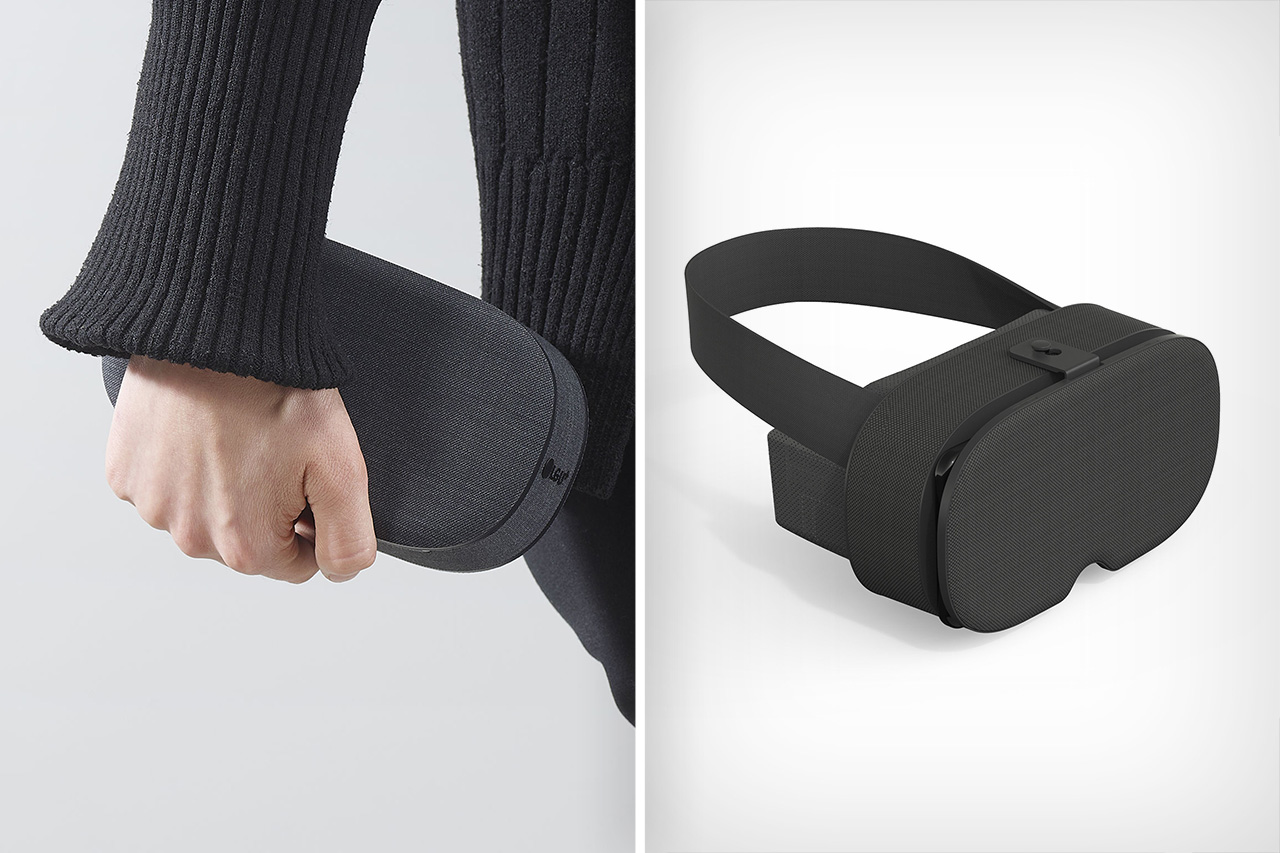 Designed to give you access to a VR experience no matter where you are, the U+ Slim is a slick little VR headset that was made to be carried around with you. It works off your smartphone (which docks into the headset) and comes with all the essential elements such as a face cushion, lenses, and headbands carefully positioned inside the headset in a way that makes it compact to carry around. When you want to use the U+ Slim, the face-cushion slides right out, and the headband (which remains hidden until you need it) pops out too, giving you the ability to enjoy immersive virtual reality content no matter where you are. Once you’re done, just fold down the U+ Slim into its compact clutch-shaped form and carry it around with you either in your hand or in your bag! 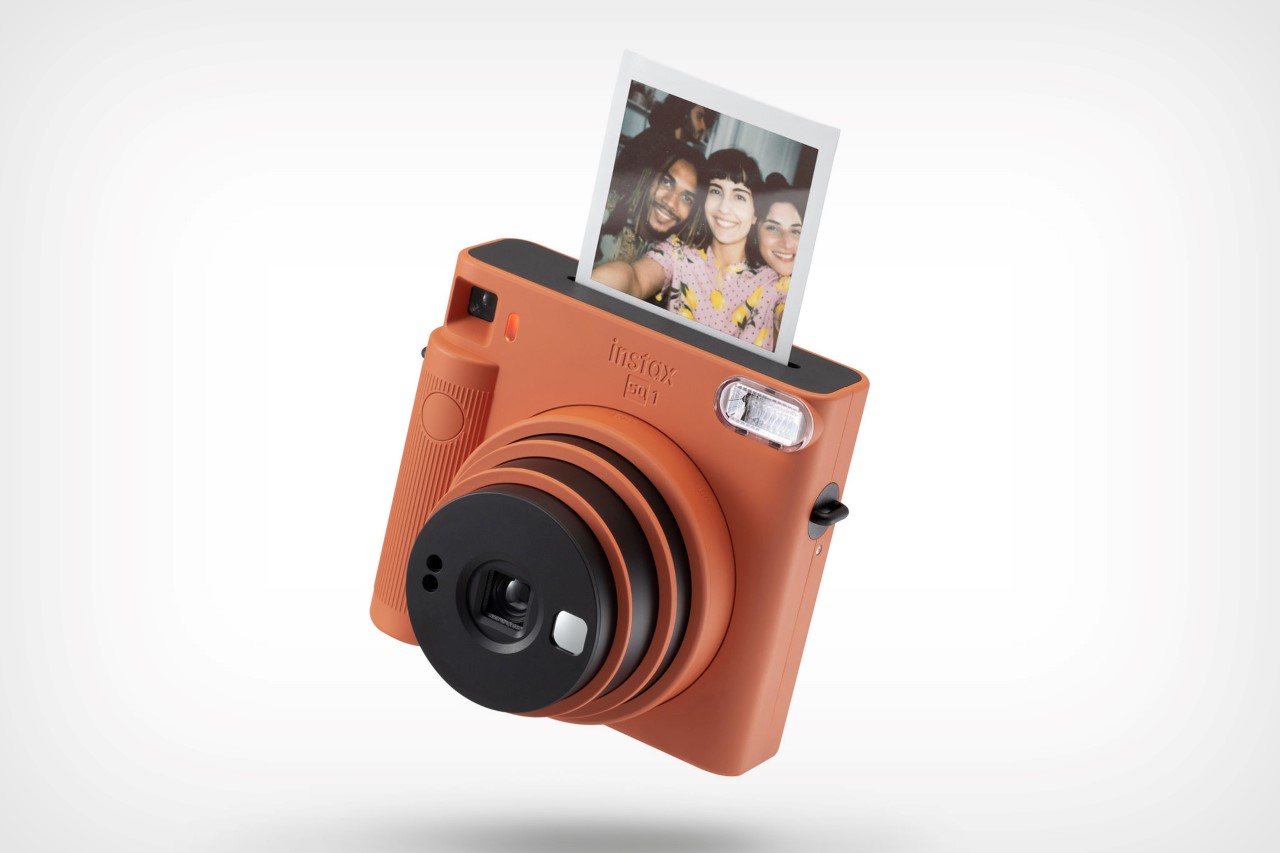 The instax SQUARE SQ1 balances itself between being a classy instant camera and a fun accessory to carry with you and capture your life. The instant camera’s design is a combination of muted minimal as well as eye-catching, and boasts of an easy user interface featuring a power button and a shutter button. Lanyard-holes on the side let you string the camera around your shoulder or neck, and a viewfinder + flash let you capture great photos no matter where you are! 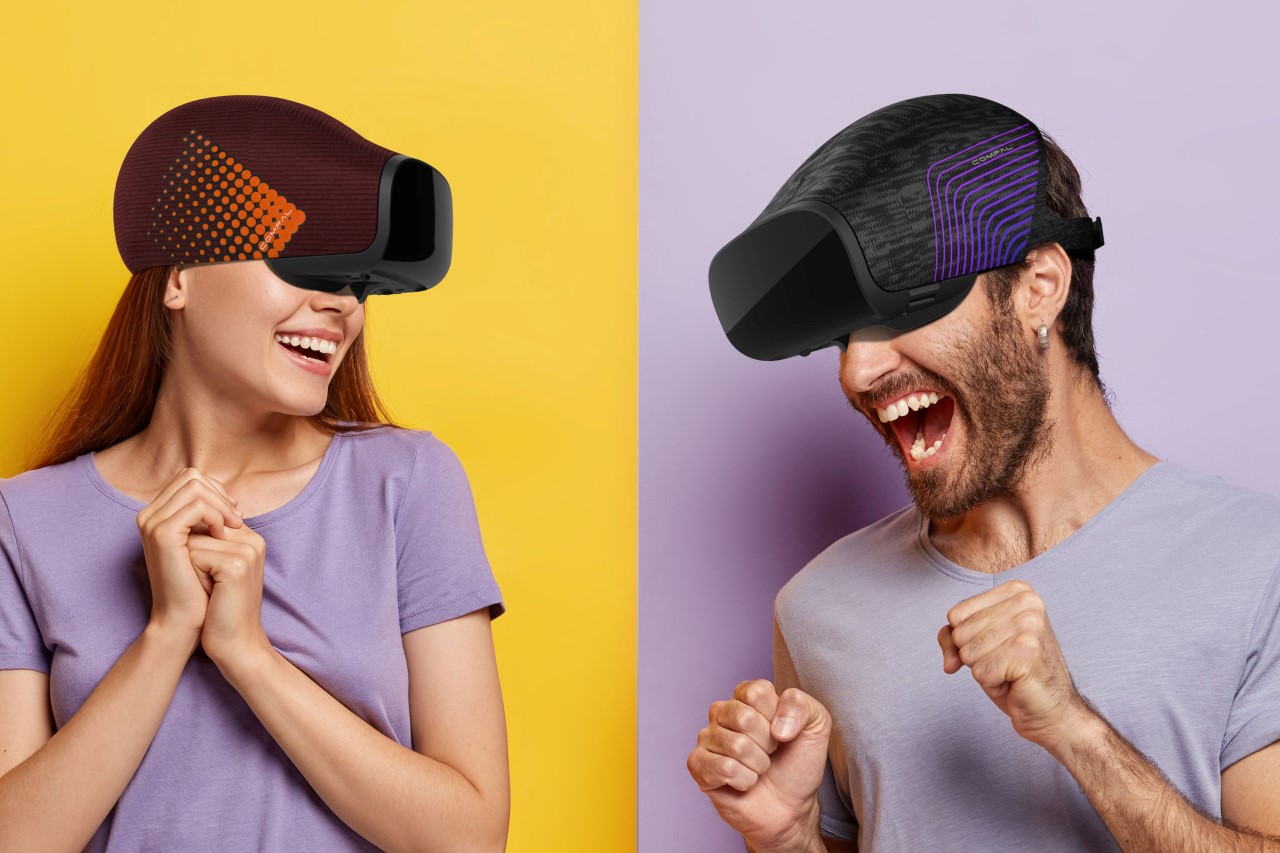 The VR Cap fixes one nagging problem with VR headsets today – the head-mount. While most VR gear comes with a single strap that goes around the side of your head (or a T-shaped strap that also sits on top), they’re almost always fiddly, uncomfortable, and feel like they’re going to fall off. The VR Cap improves upon that detail by turning the headset into a golf cap-style piece of gear that physically wraps around your head like a cap would. “VR Cap is the world’s first head-mounted display (HMD) to join a crisp VR display with a detachable, woven head covering”, Compal Electronics mentions. Woven from stretchable fabric, one size fits most heads in comfort, and customizations can be made to accommodate users like ponytails without developing new injection molds. The detachable fabric cap is machine-washable too! 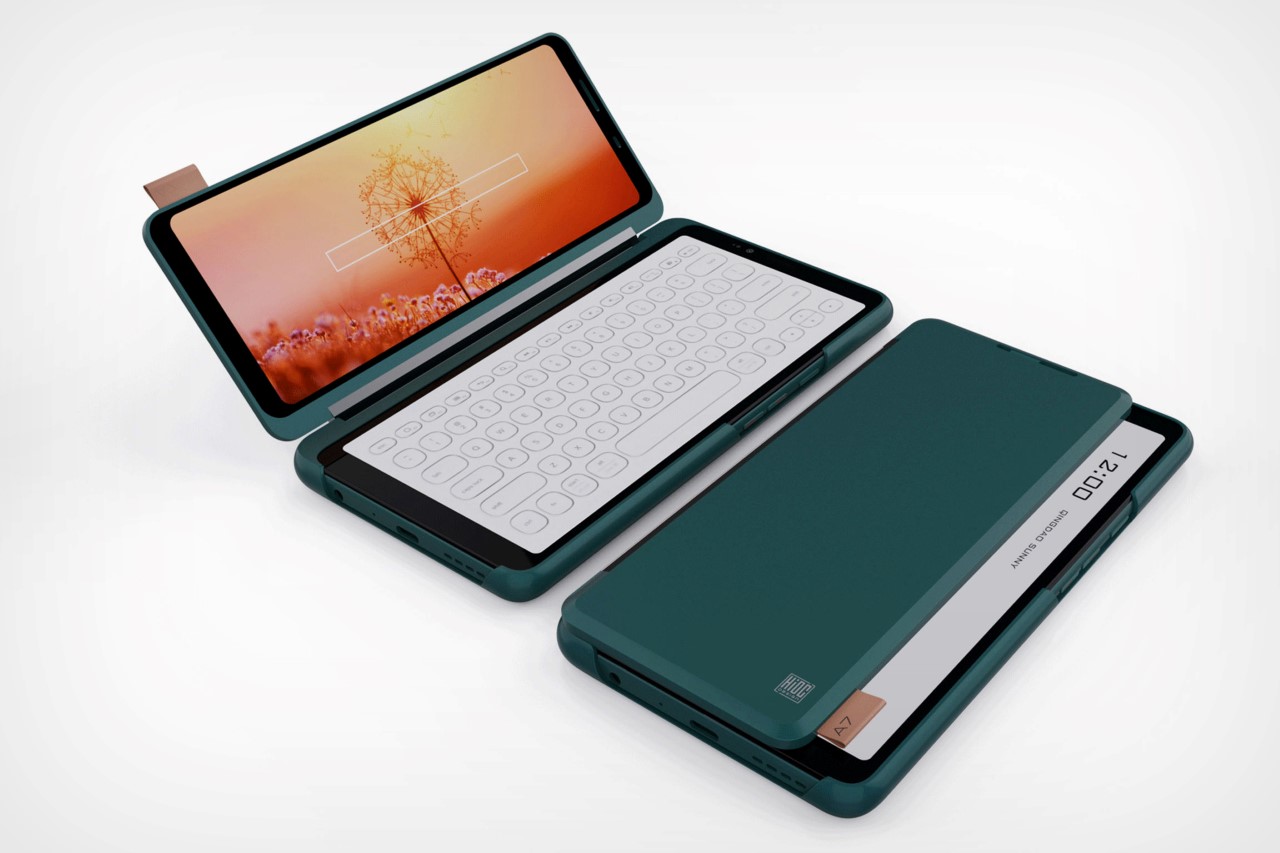 A7 Dual-Screen Smartphone by Hisense

Here’s a clever idea… while the world is figuring out the technology behind folding screens, and the use for folding screens, the Hisense A7 actually focuses on first getting users accustomed to the idea of having a split/extended screen experience. The A7 comes with 2 displays attached together (quite like Microsoft’s Duo tablet), offering you the ability to use multiple screens to multi-task as well as for power-use. One of the screens uses an electronic paper display, functioning as a keyboard + notification center (without the heavy power consumption), while the other screen serves as a primary display, allowing you to use the A7 as a makeshift laptop when you need. Cleverly enough, one screen’s actually narrower than the other, creating a notification ribbon when the A7 is closed. The ribbon (which forms a part of the always-on electronic paper display) gives you quick access to notifications, the time, alerts, etc… all without needing you to tap or wake up the phone! 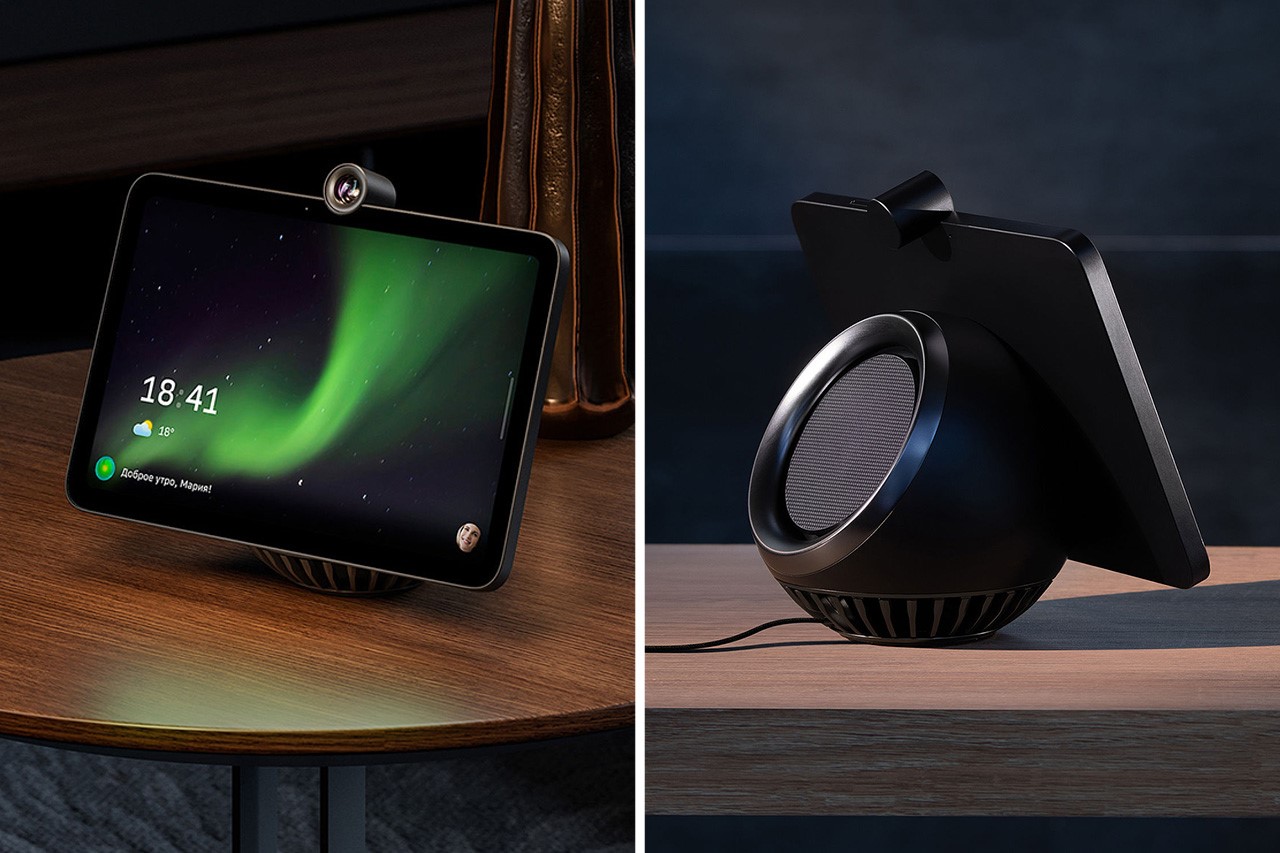 Although the name “Portal” reminds me of Facebook’s failed attempt at building a domestic video-conferencing device, the SberPortal actually serves as a smart-hub for your smart-home… with video calling features too. The SberPortal’s unconventional design gives it an interesting appearance – with a screen attached to a sphere behind it in a very Memphisian fashion. The screen features a tiny-but-powerful 4K camera on the top, while the sphere at the back houses a Harman/Kardon 360° audio system with a Kevlar-coated passive radiator for incredible sound. The SberPortal also sports a specially designed 6-mic array, allowing you to deliver commands to it (as you would a smart hub or smart speaker) and even use it as a high-quality video-calling platform. 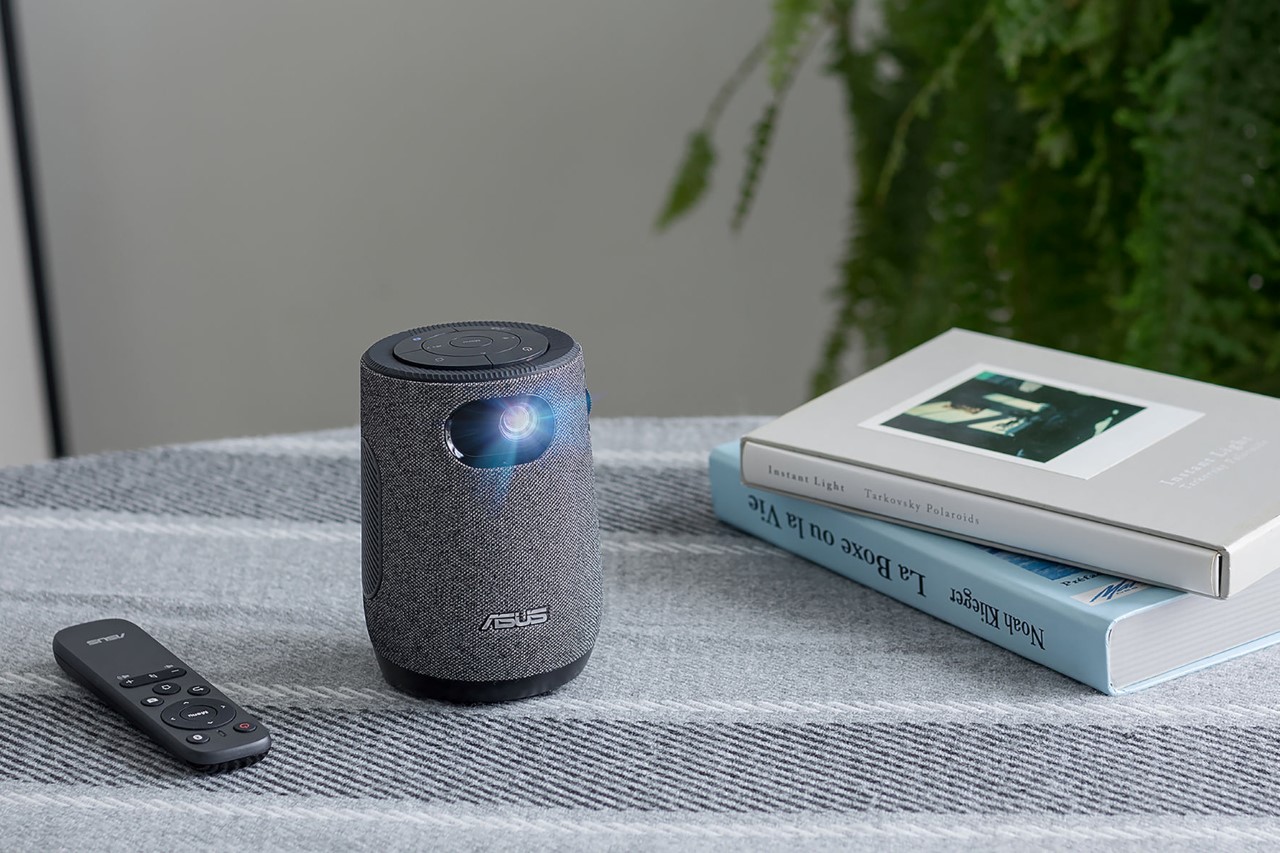 Rather adorably named the Latte, this coffee-glass-shaped device is actually a portable projector, capable of delivering 720p content while also functioning as a speaker-system. The ZenBeam Latte blends 720p HD projection and Harman/Kardon audio performance into a compact, lightweight, and ultra-portable design that’s similar in size, shape, and weight to a grande cup of coffee. The tiny projector can project screens measuring up to 120-inches in size, and works seamlessly with iOS and Android devices. Go ahead and Netflix & Chill in style!

To view all these designs and many more, visit the website of the iF DESIGN AWARD.

Recently Volleback launched their Indestructible Puffer, and it quite nearly blew our minds. Fast forward to December, and they’ve just introduced another mindboggling invention two…

The Subwing is like Superman meets Aquaman! You literally fly underwater with this super-thrilling, maneuverable underwater surfboard. Just strap it to a jet-ski or a…

As you might guess by the name, the Candy Chair was inspired by designer Jeong Yong’s insatiable sweet tooth! Shapes taken from his sugary favorites…