The AIO Phone-book does a bunch of incredibly radical things, let’s count them down. Firstly, it comes with a built-in smartphone that detaches when you need, and docks back to turn into a trackpad. Secondly, to account for the size discrepancy between smartphones and conventional trackpads, the phone sports a rolling display that allows it to not just expand, but bend too, turning into a mouse. If that wasn’t enough, the empty docking region on the laptop even acts as a wireless charging zone, for items like your AirPods. It’s possible that the AIO Phone-book, even as a concept, bites off more than it can chew… but hey, being creative and innovative ain’t a crime, right? 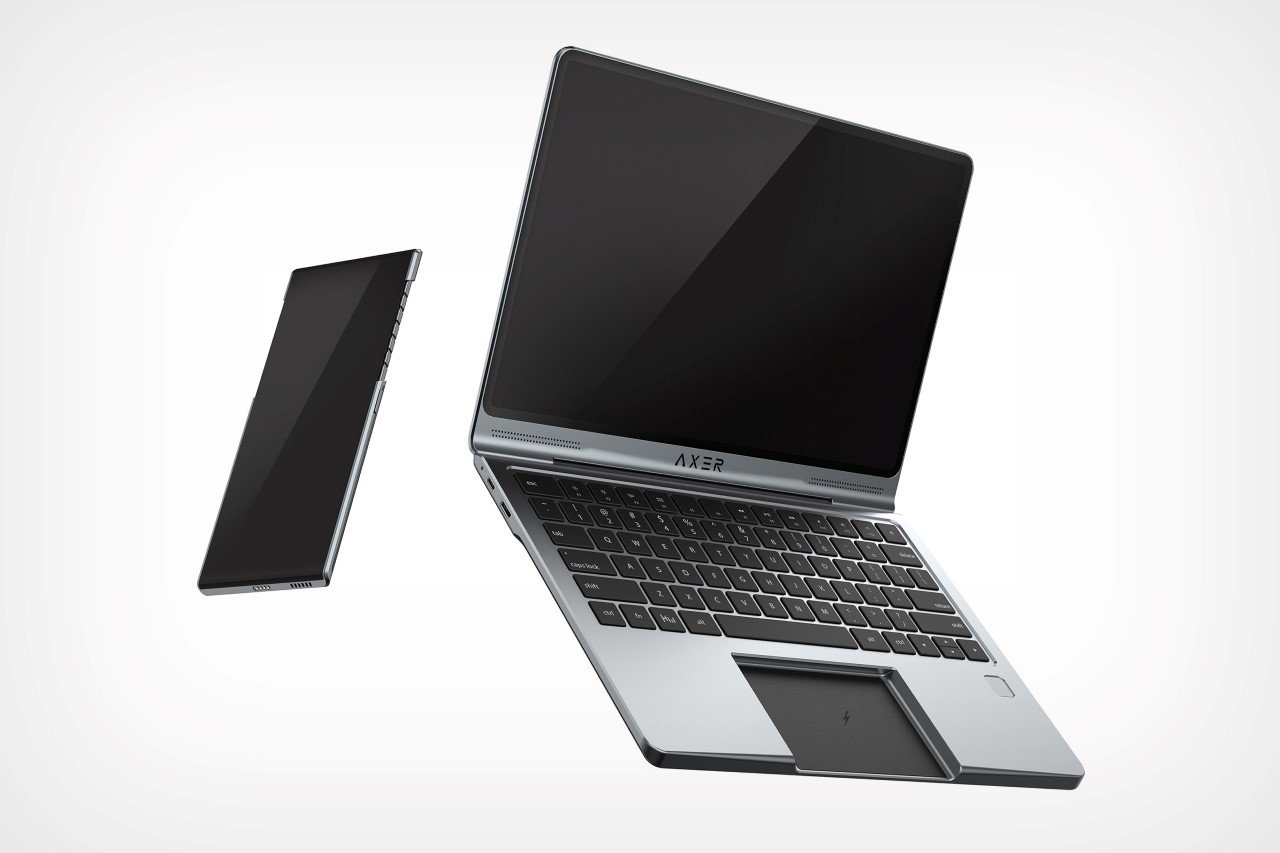 A winner of the Spark Design Award (probably for sheer far-fetched futurism), the AIO Phone-book comes from the mind of Kylin Wu, a Shenzhen-based Industrial Designer. Objectively, without looking back at what laptops have been like for the past decade, the AIO Phone-book makes a pretty common observation. The trackpad has a touch-sensitive surface, and so does the phone… so why don’t they both exist together as a single device? The AIO Phone-book comes with a smartphone that sits flush against its keyboard, with a screen that serves as a trackpad + mini-tablet. When docked in place, the smartphone acts as an auxiliary device for the laptop, allowing you to use its screen as a numpad, control center, and a trackpad. Detach it, and you’ve got yourself a smartphone that can be used independently as its own device, or as a mouse for your laptop. 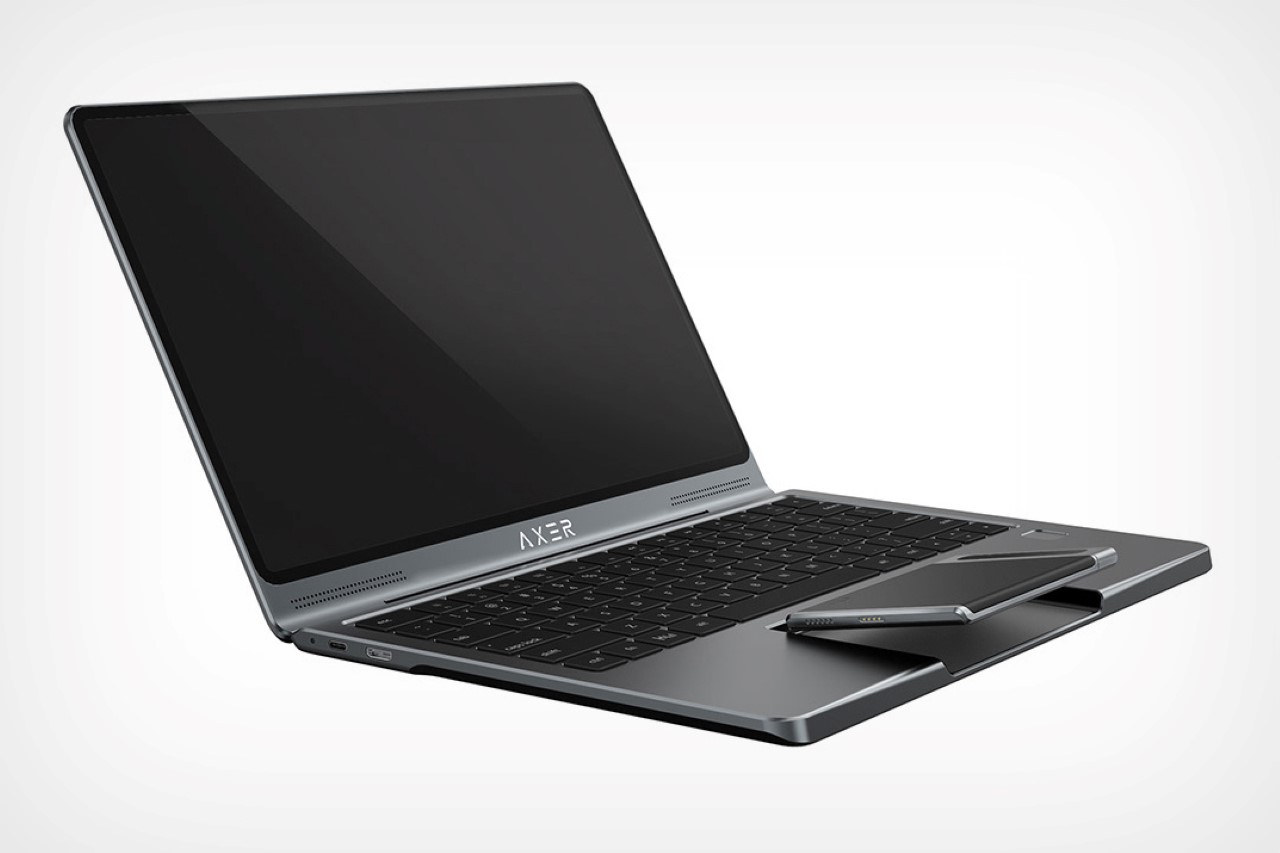 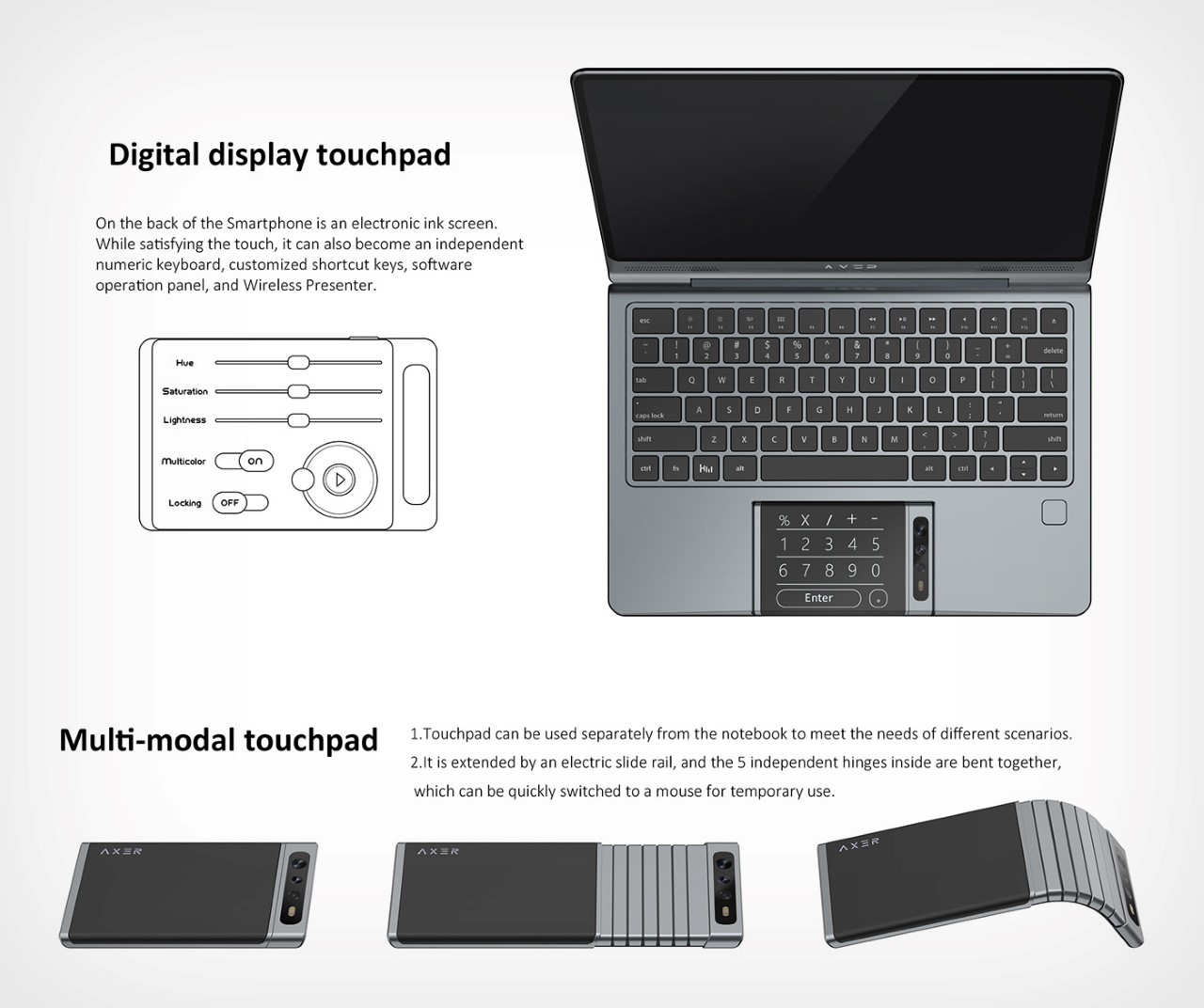 The smartphone comes with an expanding design, made possible thanks to a rolling screen and a unique flexible hinge that allows the phone to expand as well as curve. We’re WAY DEEP in uncharted territory so let’s not try to bring logic or hardware limitations into this. While the smartphone’s undocked, the empty space on the laptop serves as a platform for wirelessly charging other devices like your TWS earbuds. When you’re done and you want to dock your phone back in again, it snaps in place and contact points on the top and the bottom of the phone connect it to the laptop, allowing it to charge (as well as potentially send and receive files). 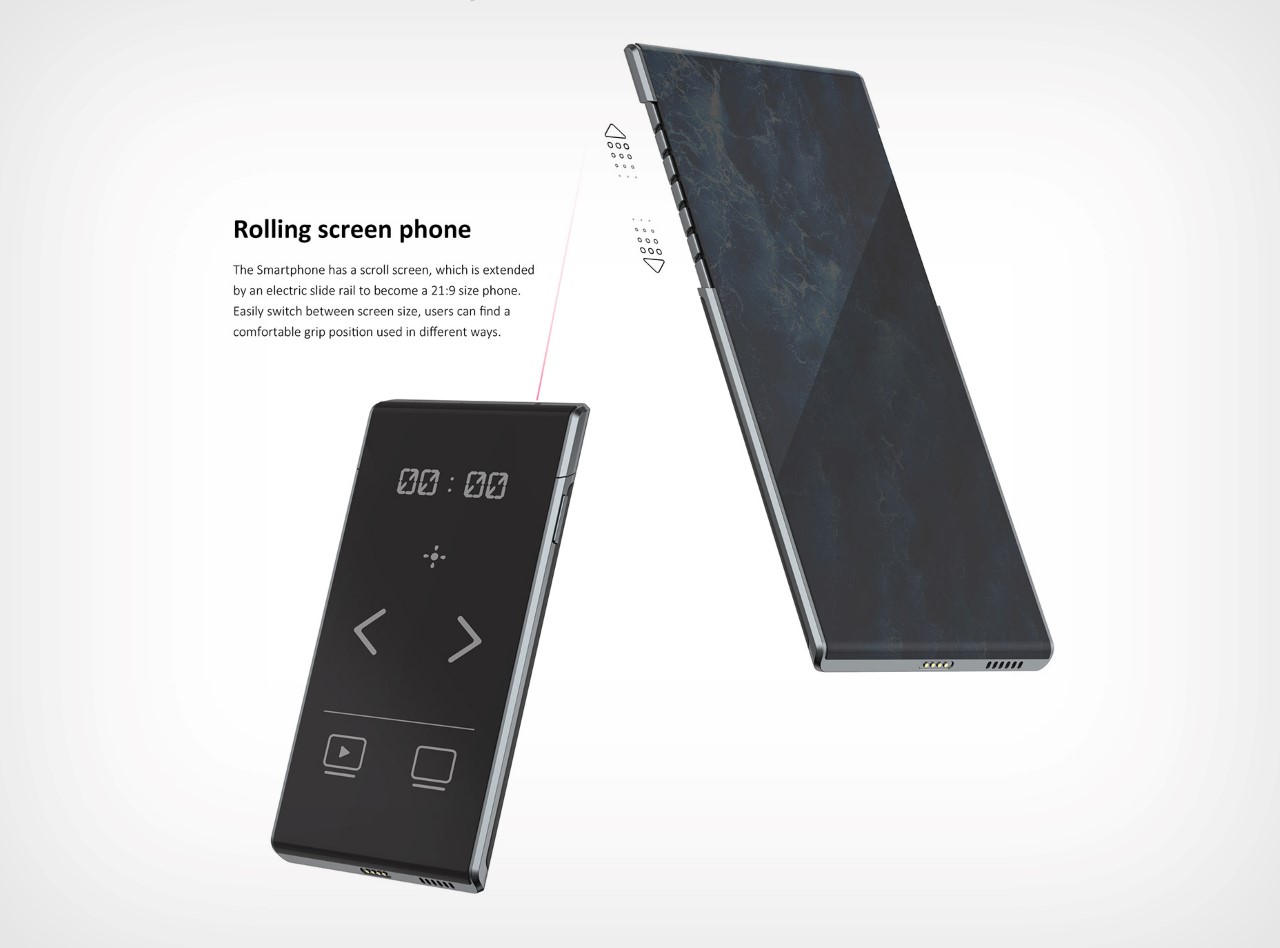 The idea of docking a smartphone inside a laptop isn’t new. Razer even showcased a prototype of this very concept with their Project Linda back in 2018. There’s no official word on why Razer never really took this concept forward, but a few thoughts come to mind – the most notable one being that people buy phones and laptops separately, and they change their smartphones MUCH more often than they change their laptops. Besides, it would create logistical and usability issues too. What do you do when you’re on a call and you need a mouse or trackpad? Or worse, what if you lose your phone? It’s safe to say the AIO Phone-book is one of those ‘absolutely unreal’ concepts because beyond being able to dock your phone in your laptop, the AIO comes with a flexible, rollable phone too. That’s WAY too many moving parts and fragile components. However, the idea of being able to use your smartphone in conjunction with your laptop is a pretty promising one. You could wirelessly charge your phone off the laptop (something Apple’s reportedly been working on), use it as a remote control for your laptop, an extended screen, a num-pad, or as Apple’s also demonstrated with Universal Control, use it to seamlessly drag and drop files between devices. That being said, the AIO Phone-book’s definitely one of the more zany concepts out there, although it does prompt us to push technology further and further… 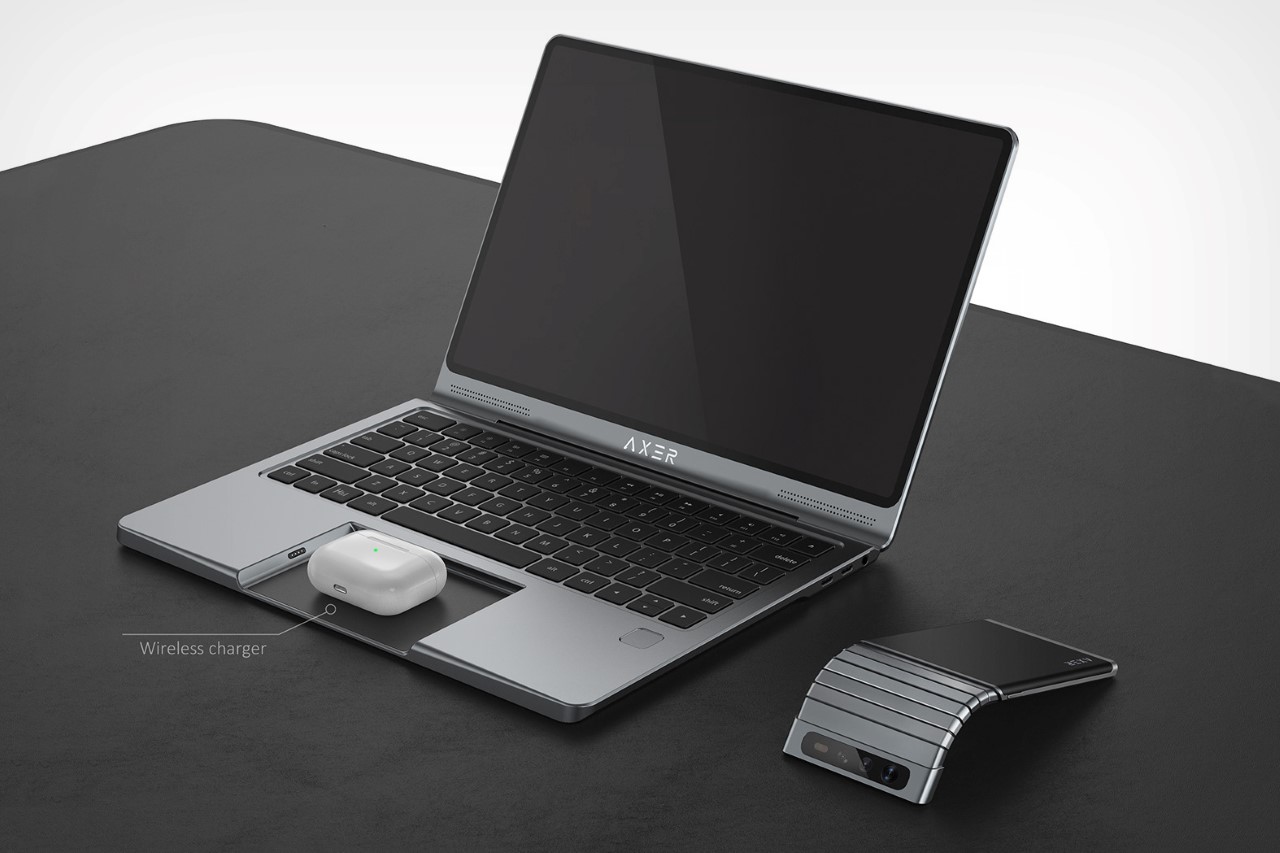 The Eaux Eaux sink is quite a take on the oceanic wave! Its simple form, in one fluid motion, integrates the spout into the basin….

A Cable That Can Take All You Can Give It

This Richard Mille homage watch comes with an iconic skeleton dial, but at just a fraction of the price

After making waves with its Archer series just last year, Japanese watchmaker Zerootime is back with its iconic, gorgeous skeleton timepieces. This time, the company…