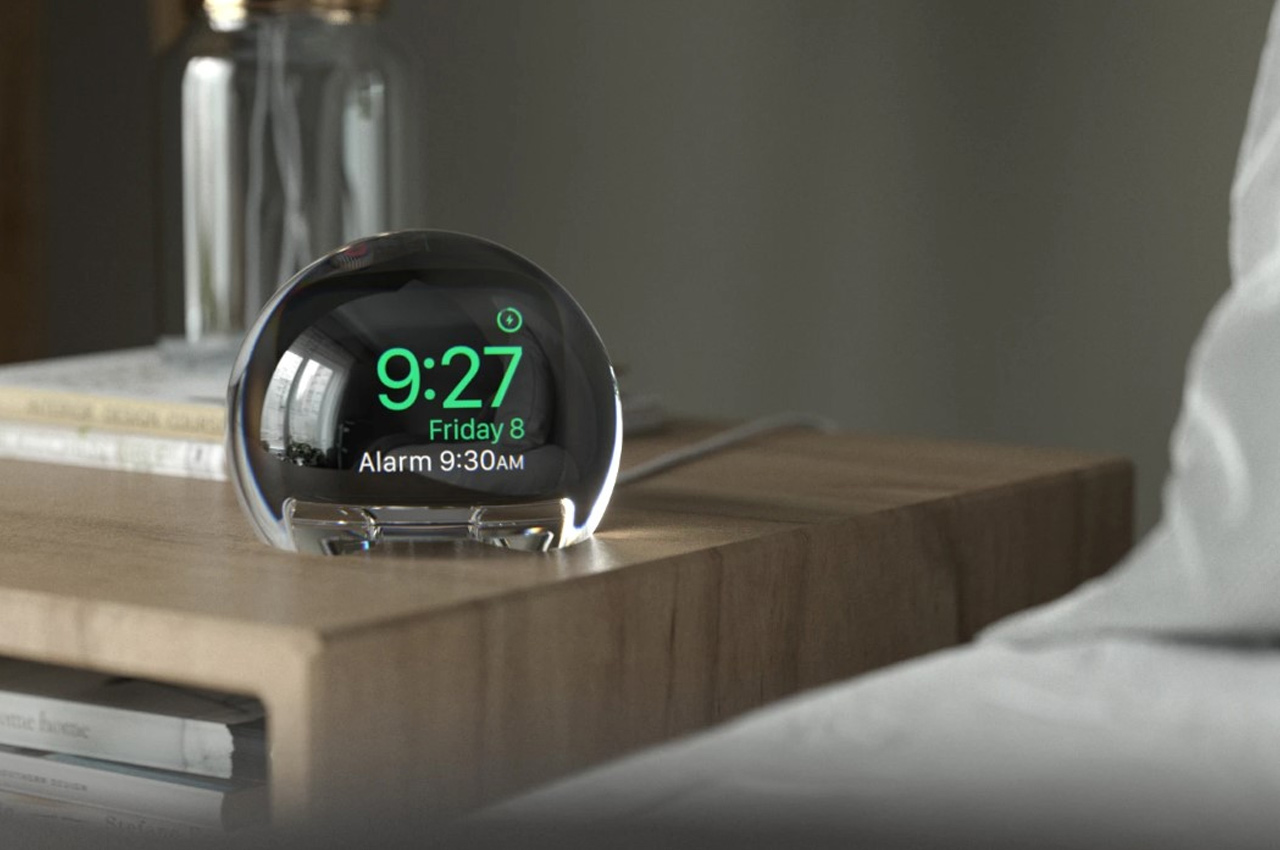 With renders of what the new Apple Watch 7 may look like spreading throughout the design world, everyone’s pretty excited to see what Apple will actually pull off with the latest version of their smartwatch. Currently, the Apple Watch is the most popular watch globally, and this honestly doesn’t come as much of a surprise when you consider the number of people you see jogging or walking on the street with their Apple Watch armed on their wrists. In celebration of this one-of-a-kind watch, and in anticipation of what its latest version may unveil, we’ve curated a collection of nifty accessories that will perfectly complement your beloved Apple Watch. From a watch case that looks like an iPod to a band that lets you control your smartwatch without touching the screen – we’ve put together a range of diverse and interesting Apple Watch accessories that even hardcore Apple lovers will go gaga over! 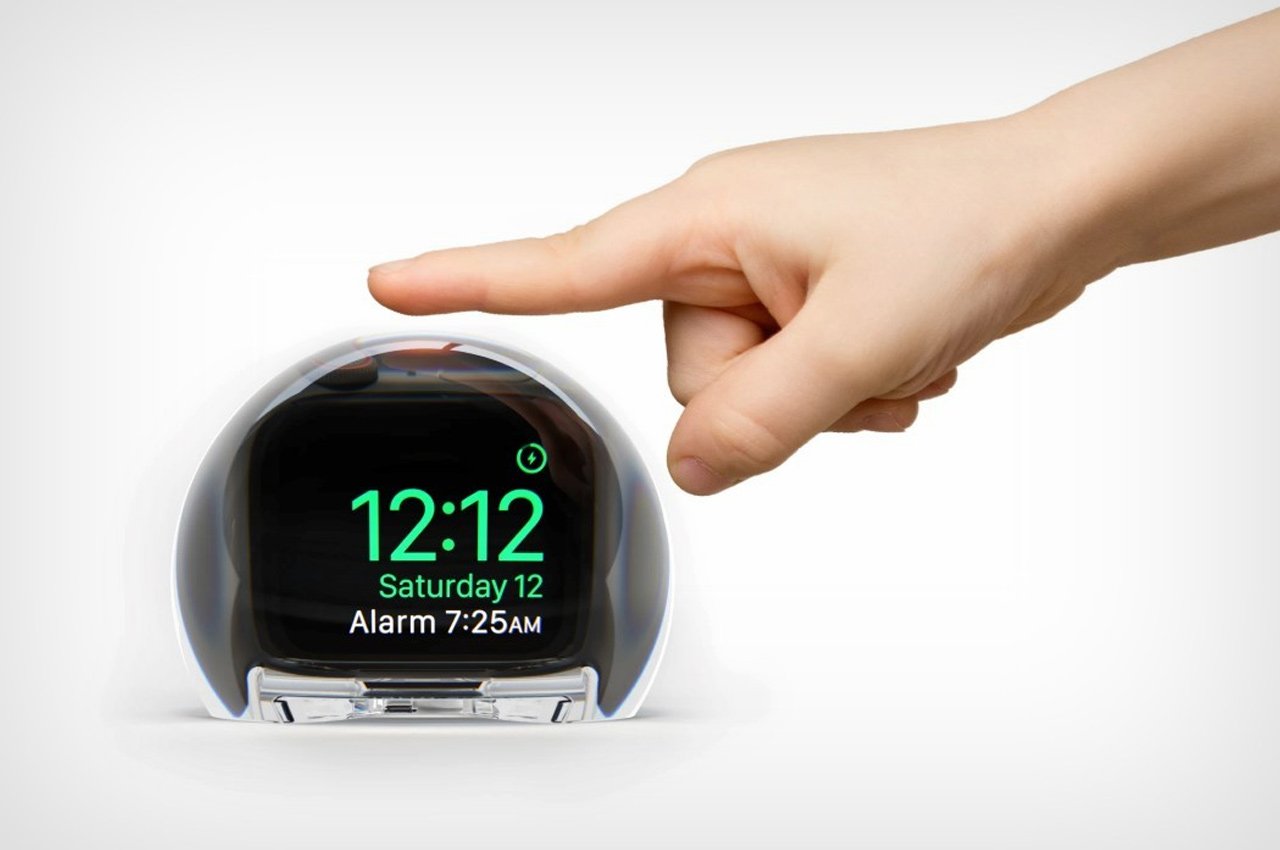 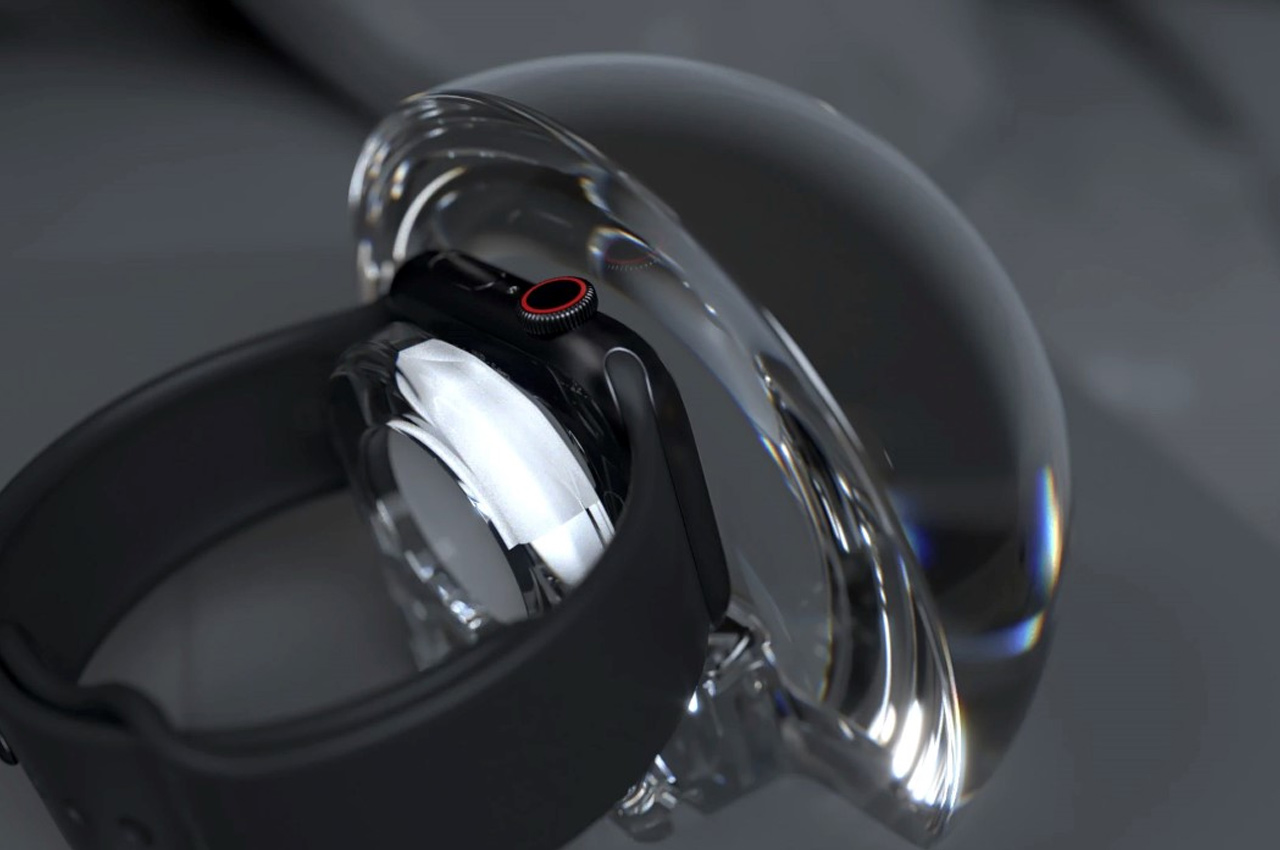 The NightWatch is an Apple Watch dock that comes with a massive curved glass element on the front that magnifies its screen. Dock your watch behind the massive lens and it makes your watch-screen larger, enhancing its visibility manifold. Designed to turn your charging smartwatch into a much more efficient bedside clock, the NightWatch does more than just increase visibility… it enhances your watch’s audio too, amplifying it to make your alarm much more audible. The NightWatch is a pretty simple accessory that enhances your Apple Watch’s abilities. It doesn’t come with its own charger but will let you hook your watch’s charger into it. Once assembled, you can easily slide your Apple Watch into its unique design, and that calibrated glass lens on the front enlarges the screen like a magnifying glass would, making numbers much more visible when your watch is in Nightstand mode. 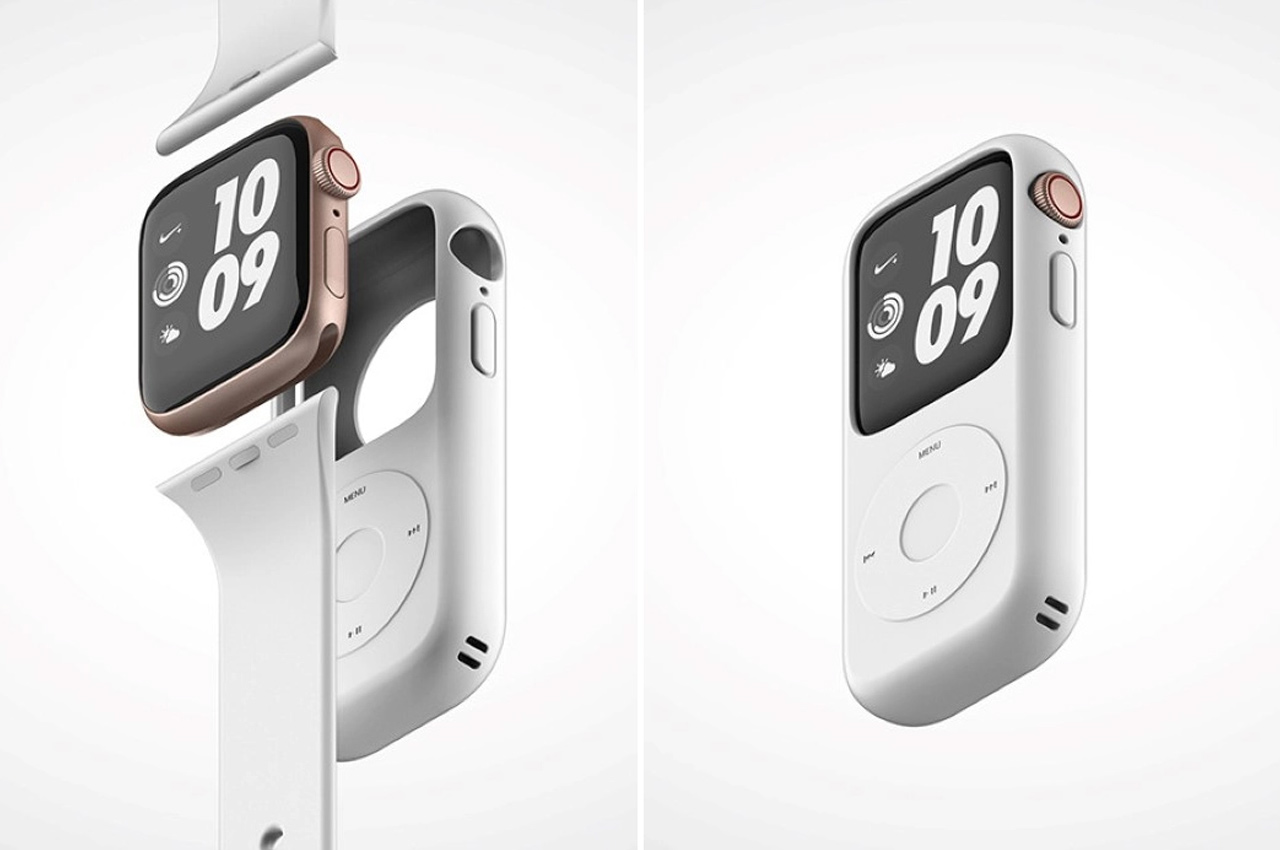 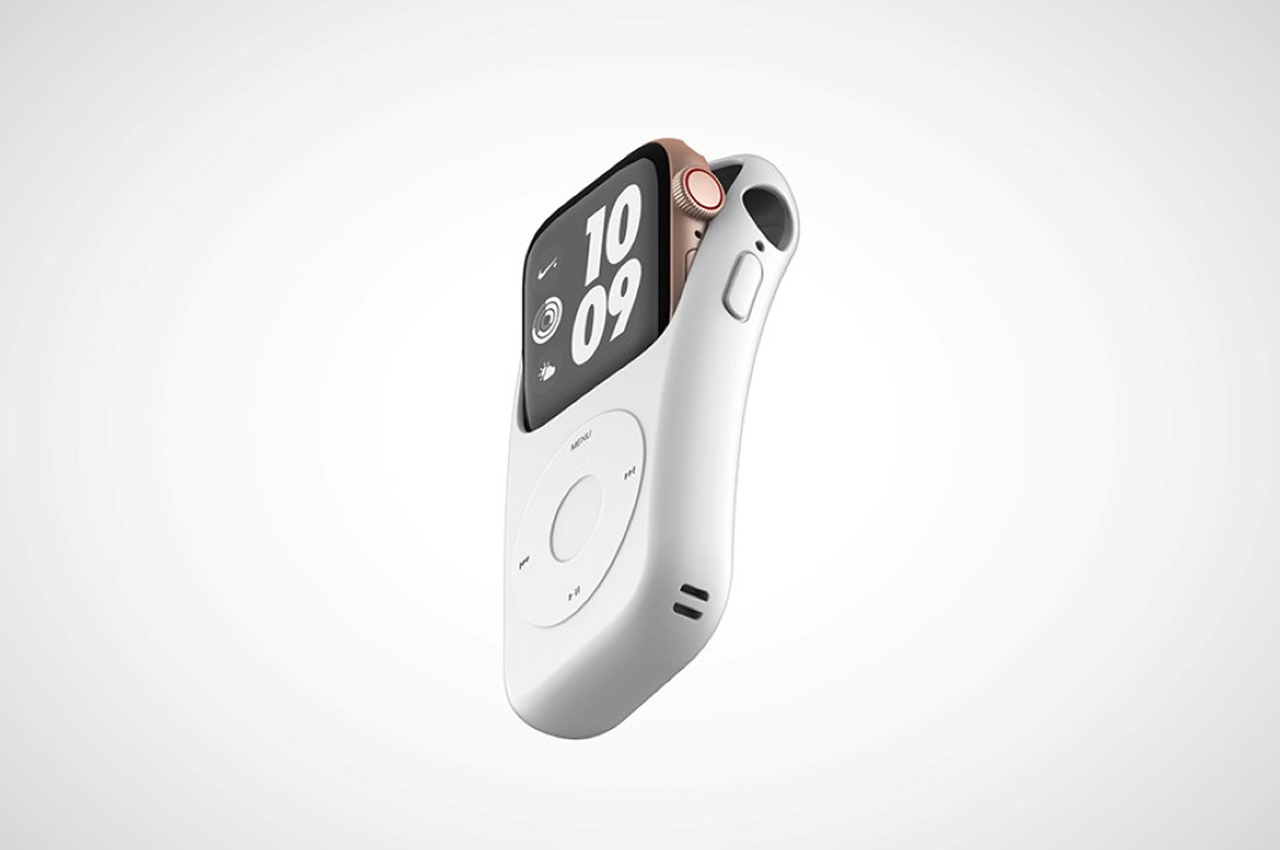 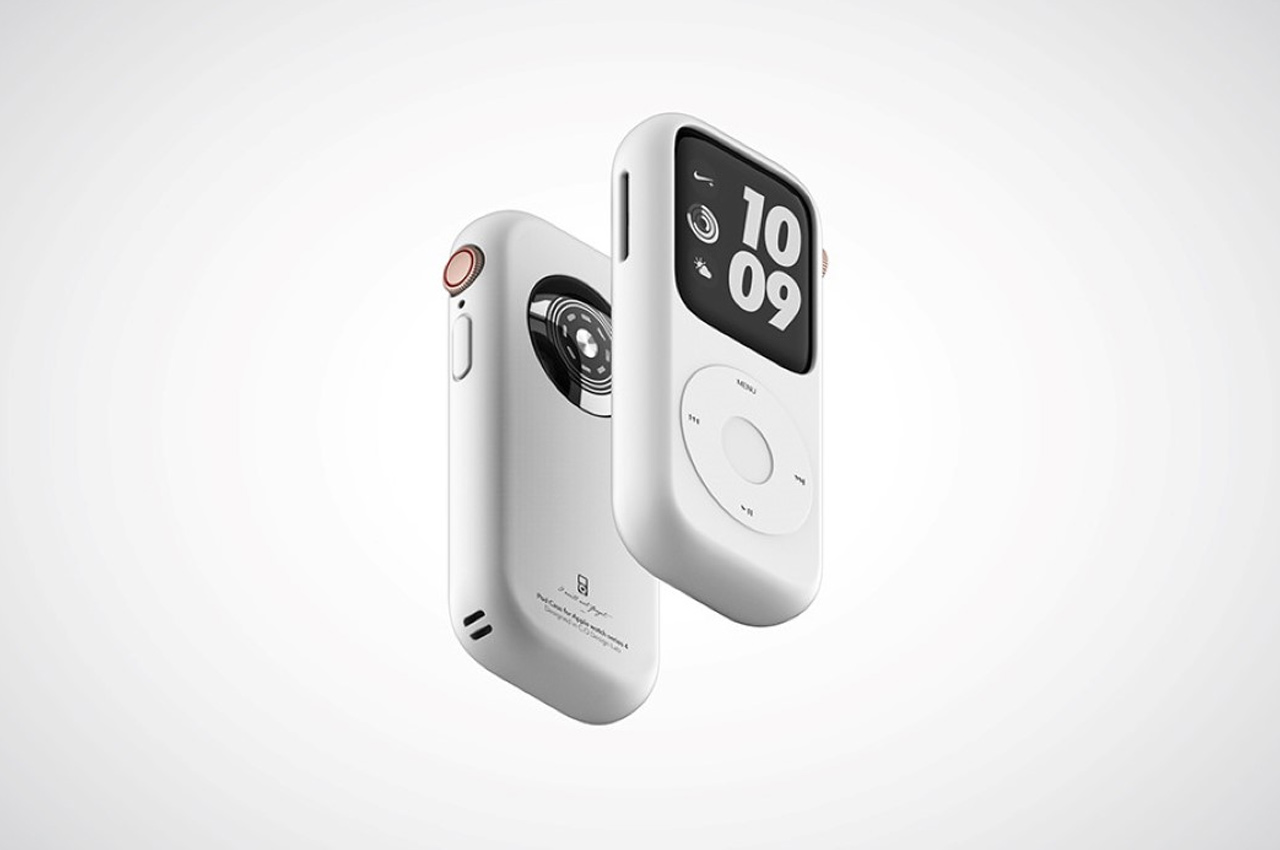 Is that a new iPod?! Nope! It’s the new Apple Watch in its coolest, old-schoolest external case yet! Joyce Kang and C.O Design Lab’s Pod Case gives the Apple Watch a much-needed history lesson, introducing it to the ancestor that started the Apple craze. The watch’s screen roughly matches the screen size found in classic iPod Nanos, while its body is only a slight bit thicker. The Pod Case, made in silicone, slides right over the Apple Watch body, giving it a funky throwback, while also letting you use the watch as-is. On the other hand, it’s a very comfortable feeling to use the latest tech with a product we have loved for a while. Obviously, the jog-wheel on the front is a dummy one (although it could work if it connected via Bluetooth), but the watch can easily be navigated using the touch-screen. Besides, this one comes with heavy-duty speakers of its own too! 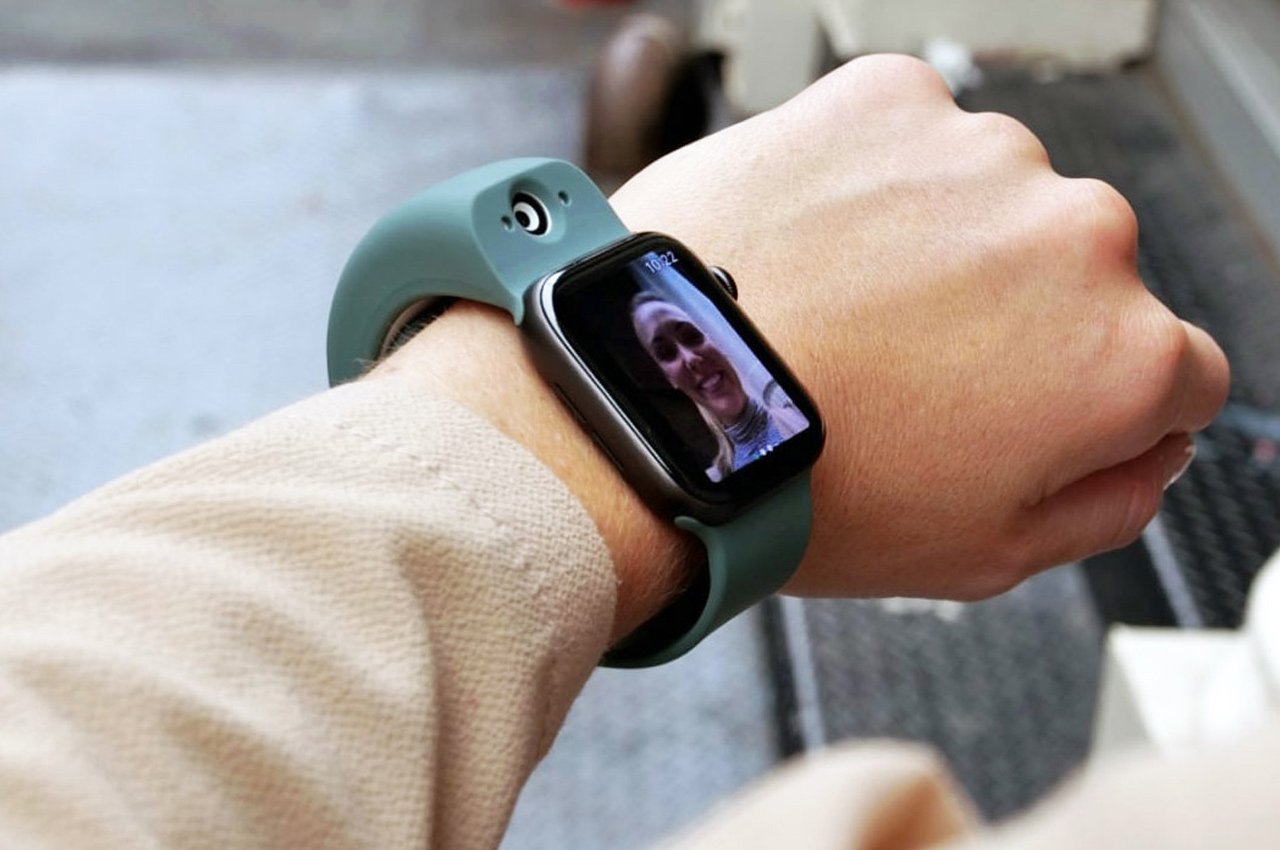 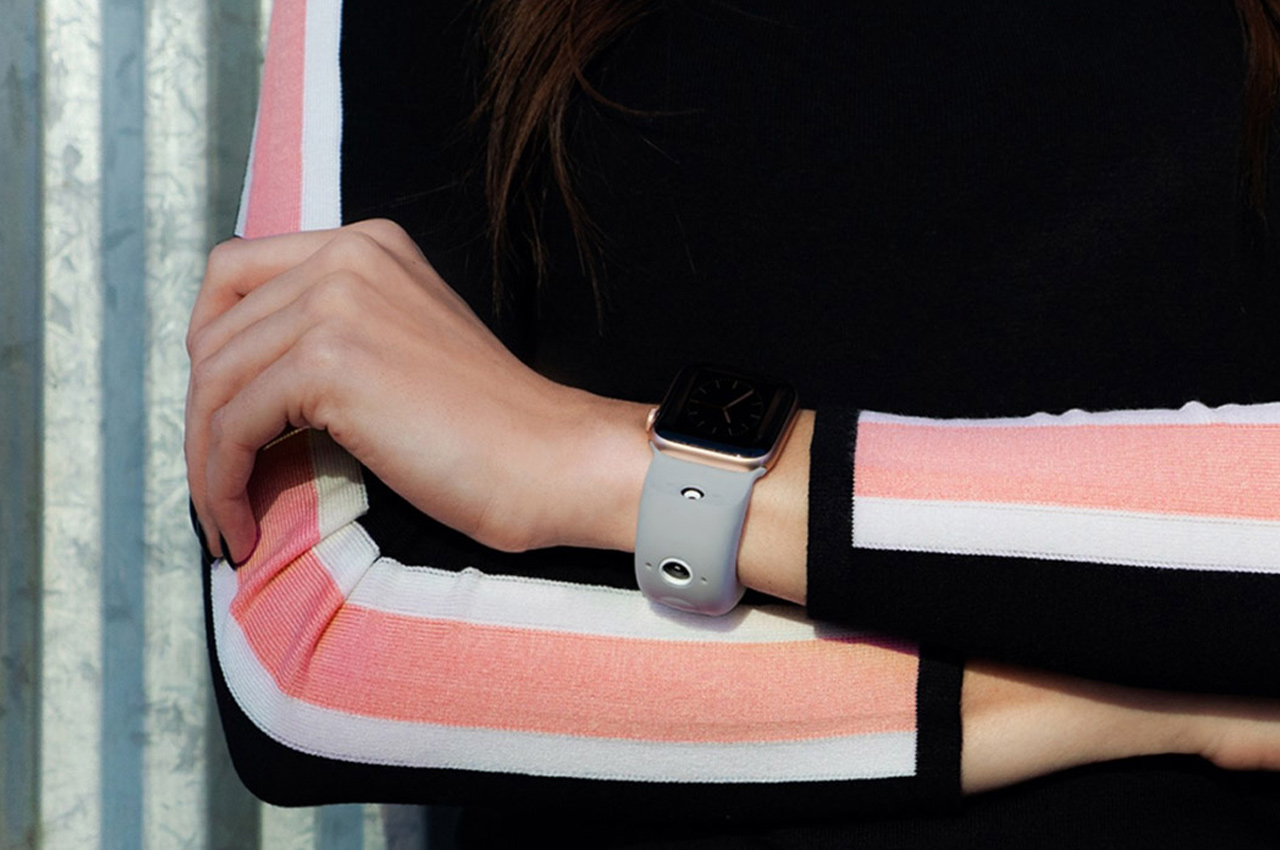 With all the possible goodness – health and fitness tracking and everything – Apple Watch cannot click pictures standalone, it remotely triggers the iPhone to pull off the trick. This is where the Wristcam steps in, giving Apple Watch the ability to click pictures by itself. The front-mounted 8MP camera can shoot images in 4K resolution while recording videos in Full HD. The selfie camera can be used for video calling – or either camera for live-streaming. The Wristcam comes with its own 8GB of storage and a battery good enough for a day’s fun. According to the company, the Wristcam is water-resistant up to 1-metre, it connects to the Apple Watch over Bluetooth Low Energy, and with the iPhone via Bluetooth or Wi-Fi. 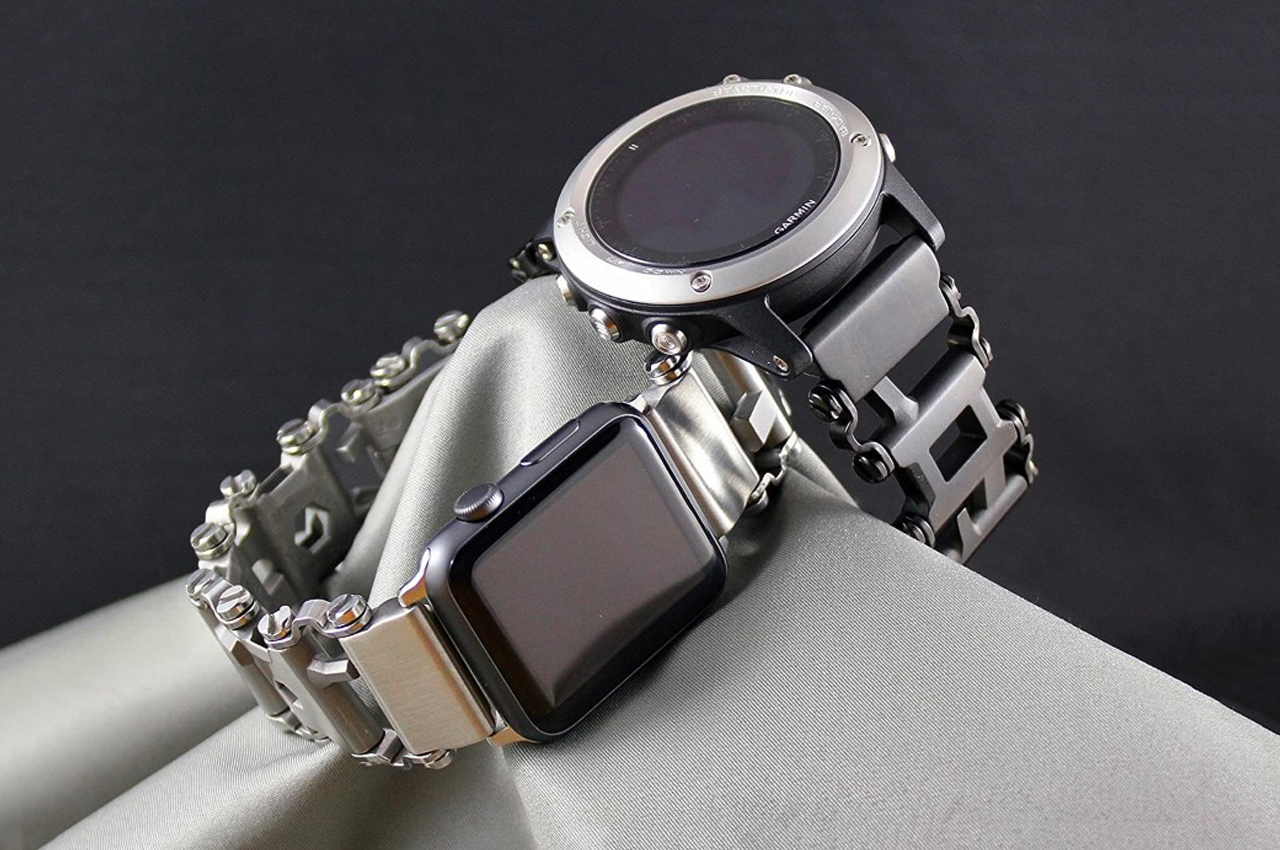 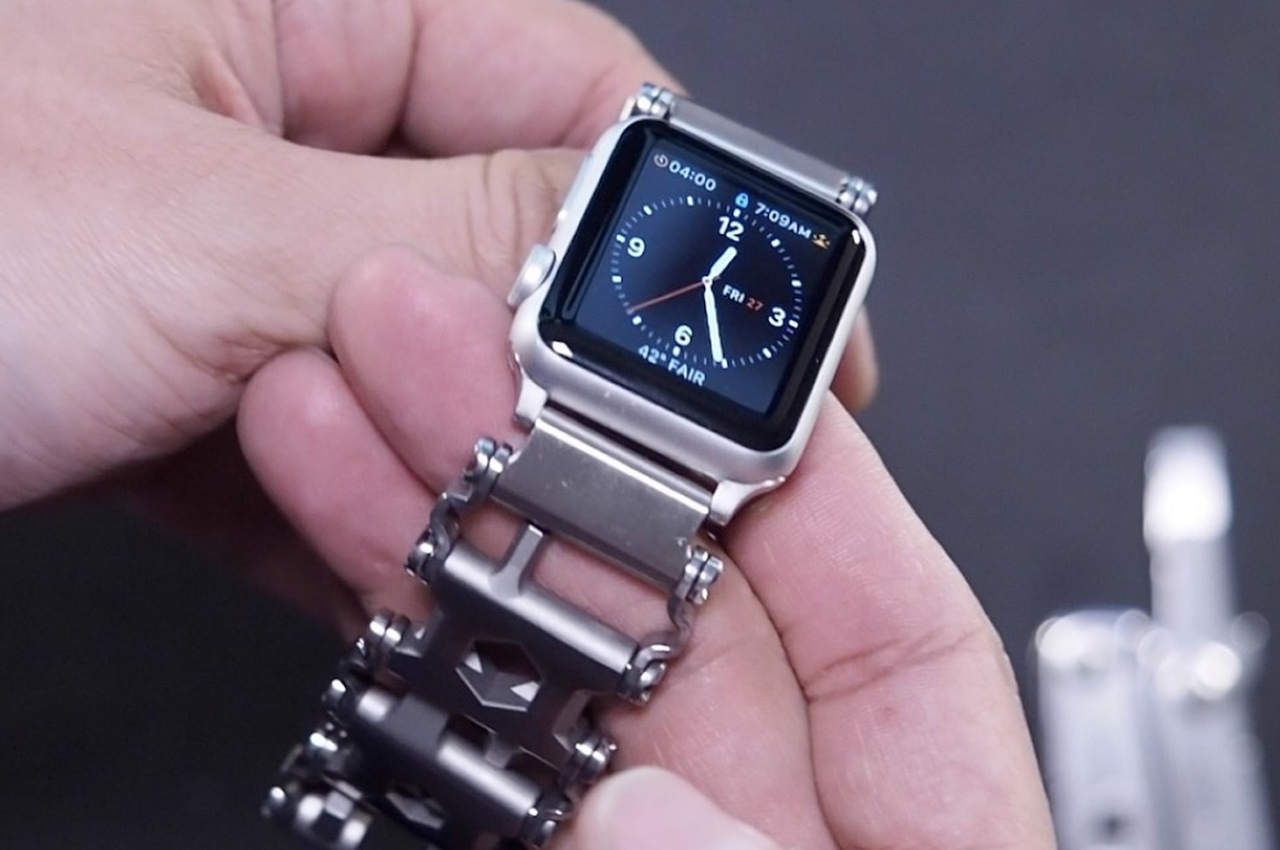 This handy bracelet + attachment turns your watch-strap into an EDC utility belt with 29 different tools! The magic lies in two parts – the existing Leatherman Tread Bracelet, which packs 29 high-strength stainless-steel multitools in a portable, travel-friendly band that sits along your wrist… and the adapter, which turns the bracelet into a strap that attaches to your Apple Watch (or any other smartwatch). The bracelet’s individual links hold as many as 3 tools per module, from flathead screwdrivers to Phillips head screwdrivers, a wide range of hex-drivers, and even an oxygen tank wrench. Made in Portland, Oregon, the Leatherman Tread Bracelet brilliantly turns EDC into something absolutely new, allowing you to wear it along your wrist as almost a fashion accessory… and the bracelet’s designed to last too, with a whopping 25-year warranty. 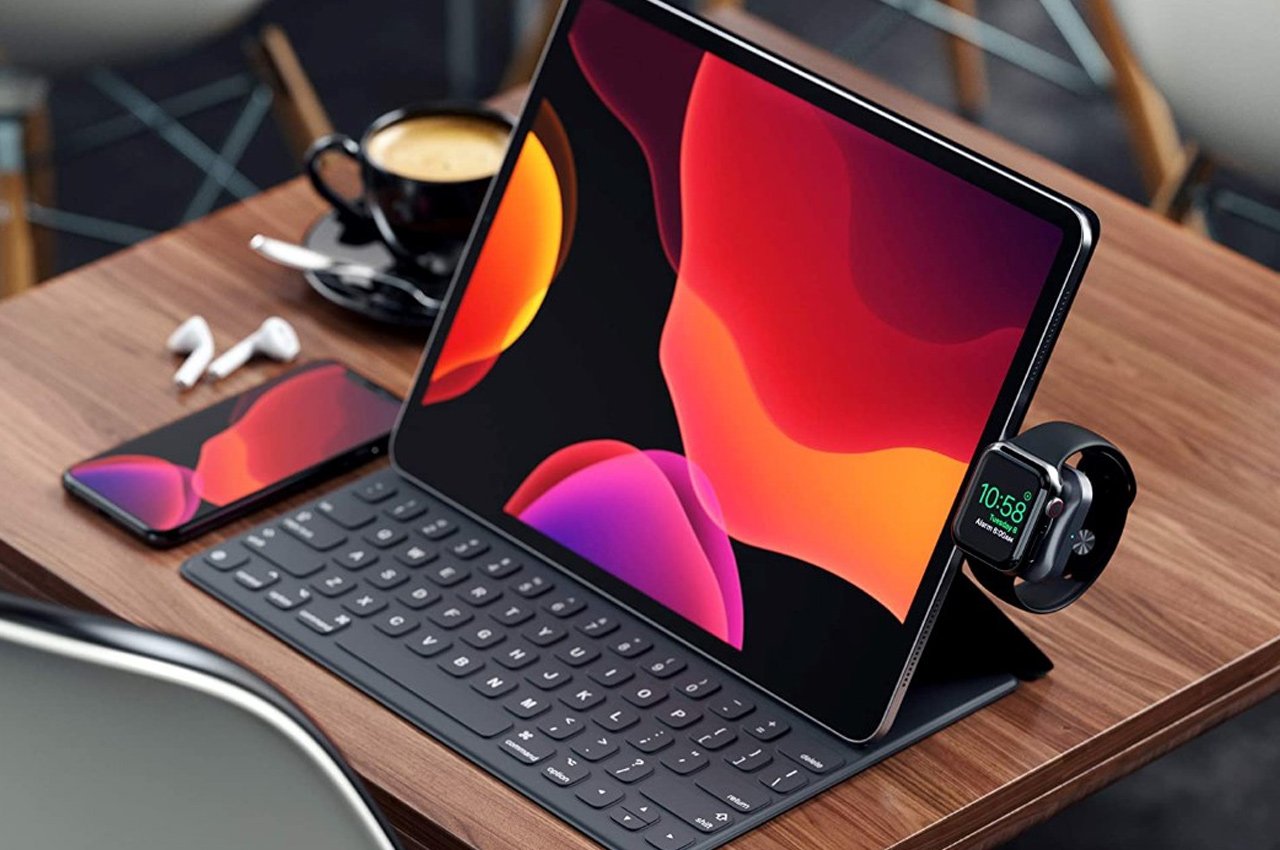 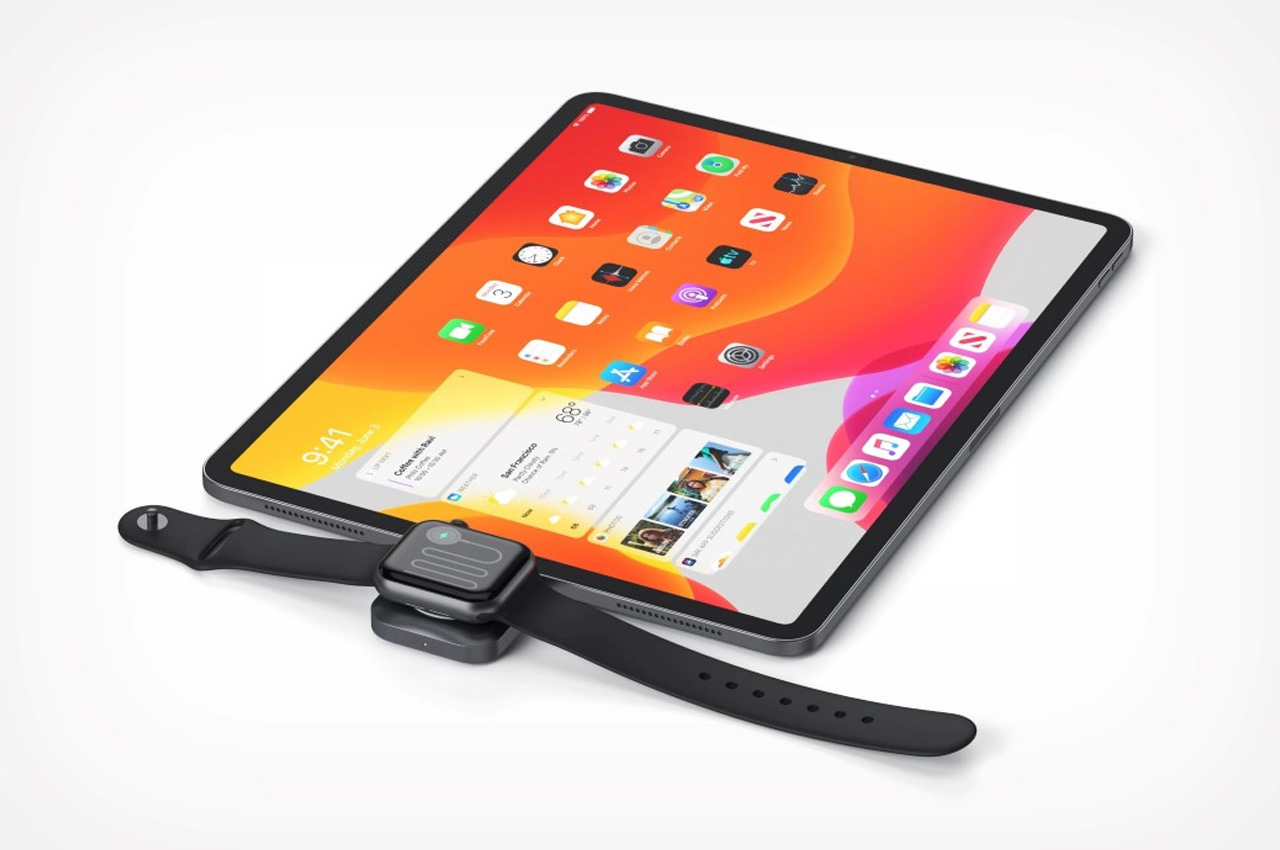 Like all of Satechi’s products, the USB-C Magnetic Charging Dock comes with Apple-certified MFI charging, and works across all generations of the Apple Watch. The dock plugs right into the side of the iPad Pro or the MacBook Pro, although you could just as easily use it with any power-bank too. The sleek aluminum design does a pretty good job of blending in with Apple’s design language, while inbuilt magnets securely hold onto your watch as it charges, allowing you to dock your iPad on a stand without worrying about the watch slipping or falling off. Neat, eh? Maybe you could even use it as a small extended display too, running a timer, your clock, or the weather app right beside your screen as you work or browse the web! 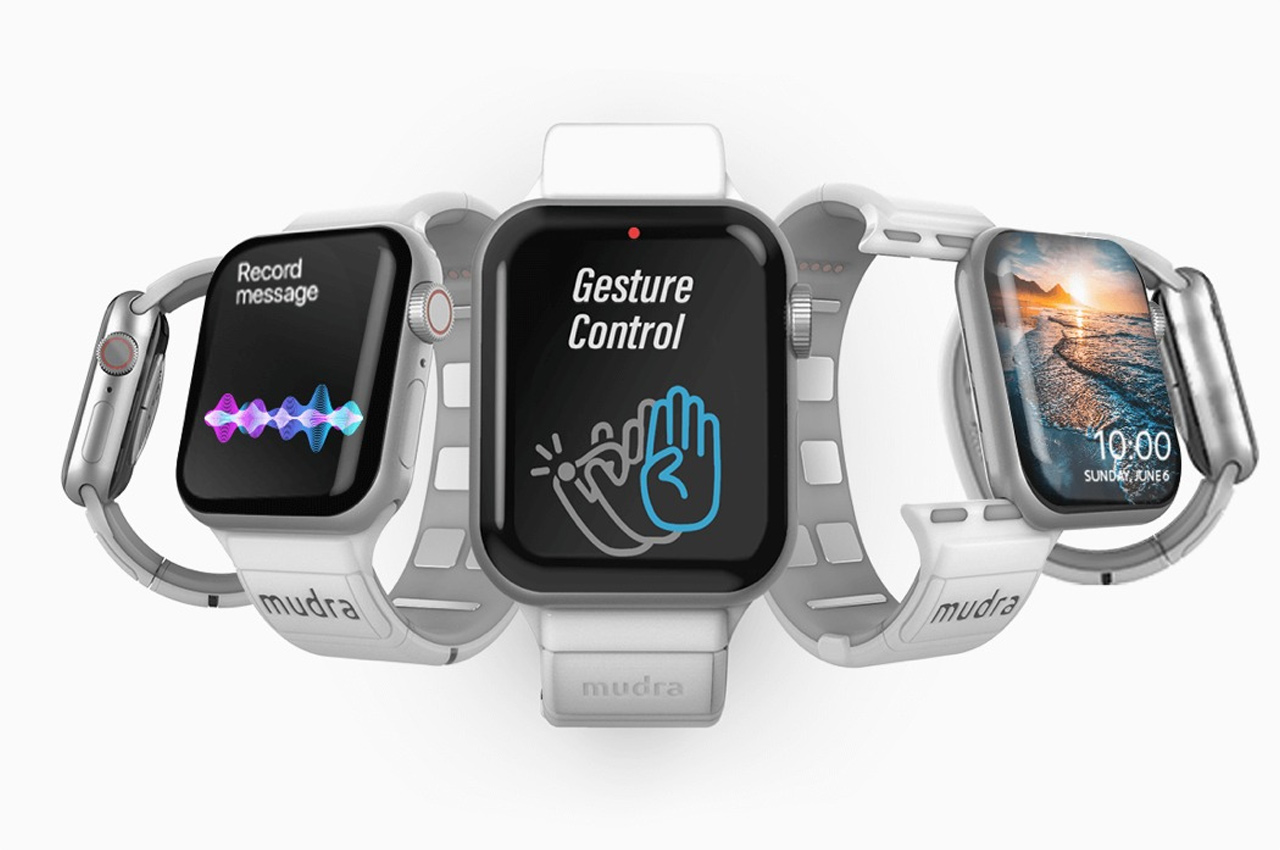 Working on a tech quite similar in outcome to the Google Soli chip found in the Pixel 4, the Mudra is a wristband for the Apple Watch that comes with its set of sensors that pick up hand gestures by measuring nerve activity in your wrist. The Mudra band allows you to use your watch without touching it, but more importantly, it gives you the ability to use your left hand to control parts of the Watch experience, being able to snooze alarms, accept or reject calls, play/pause/skip music tracks, or even playing an old-fashioned game of Snake. The band picks up directly on gestures sent to your wrist via the motor nerve, almost forming a brain-to-device interface. 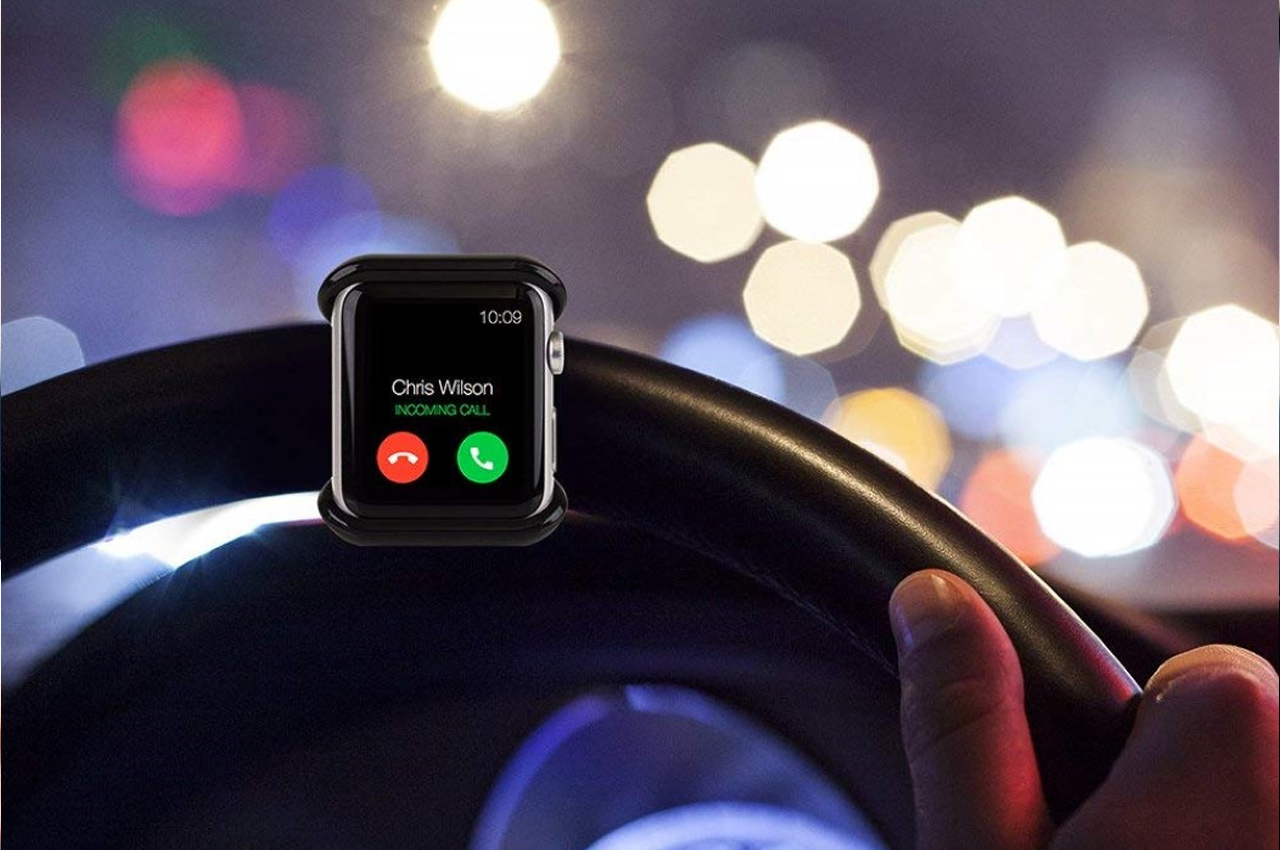 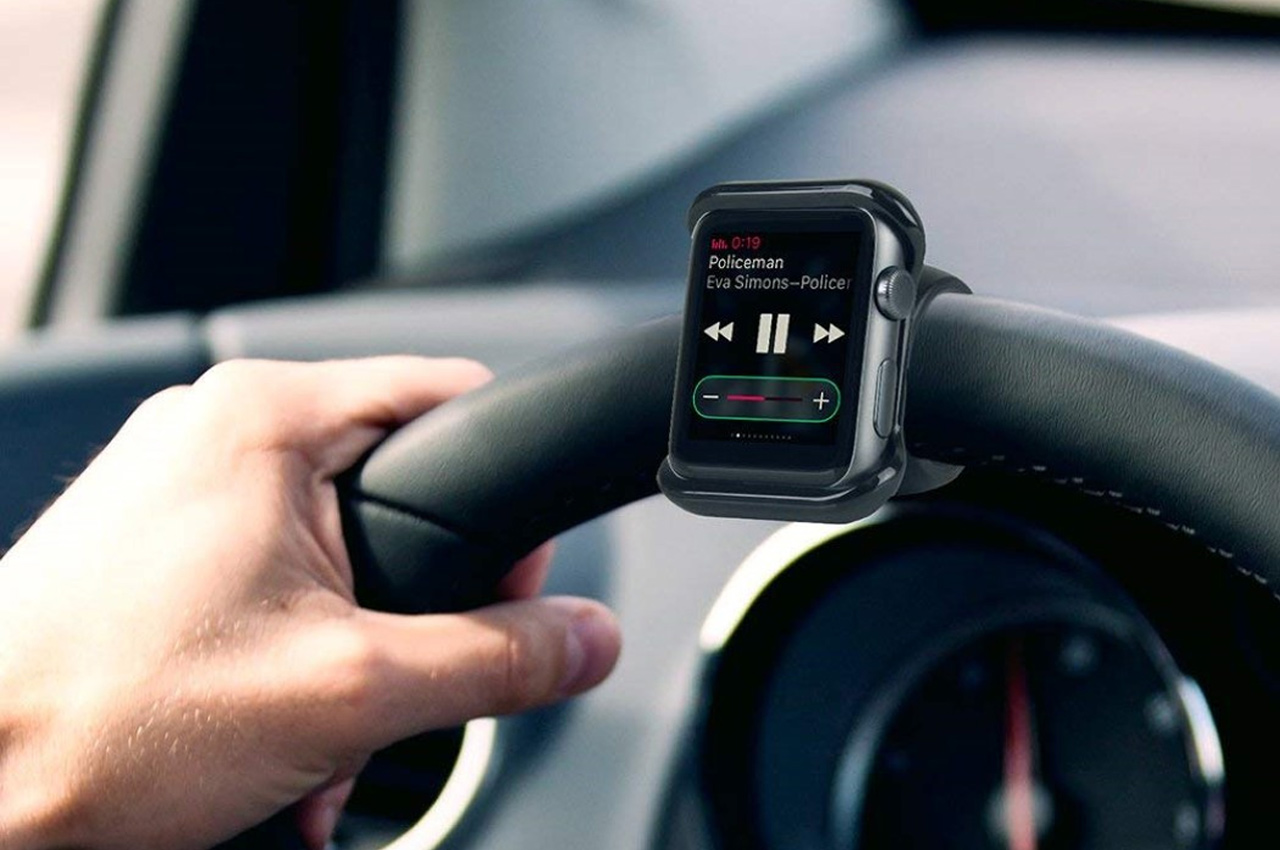 Satechi’s Grip Mount for the Apple Watch allows you to attach the device (sans the wristbands) to your car, cycle, or motorbike, allowing it to work in conjunction with the vehicle, serving the purpose of a navigational device that also lets you answer and reject calls, or even control music. The fact that the Watch comes with Bluetooth makes it perfect for your car, allowing you to connect it to the car’s audio system for onboard calls, navigational guidance, or controlling music playback. You can also use it on a bicycle, letting it run the Cyclemeter app to capture the amount of exercise you’re getting too! The Apple Watch, chock-a-block with cutting-edge technology, is capable of being much more than a wrist-mounted smart device. 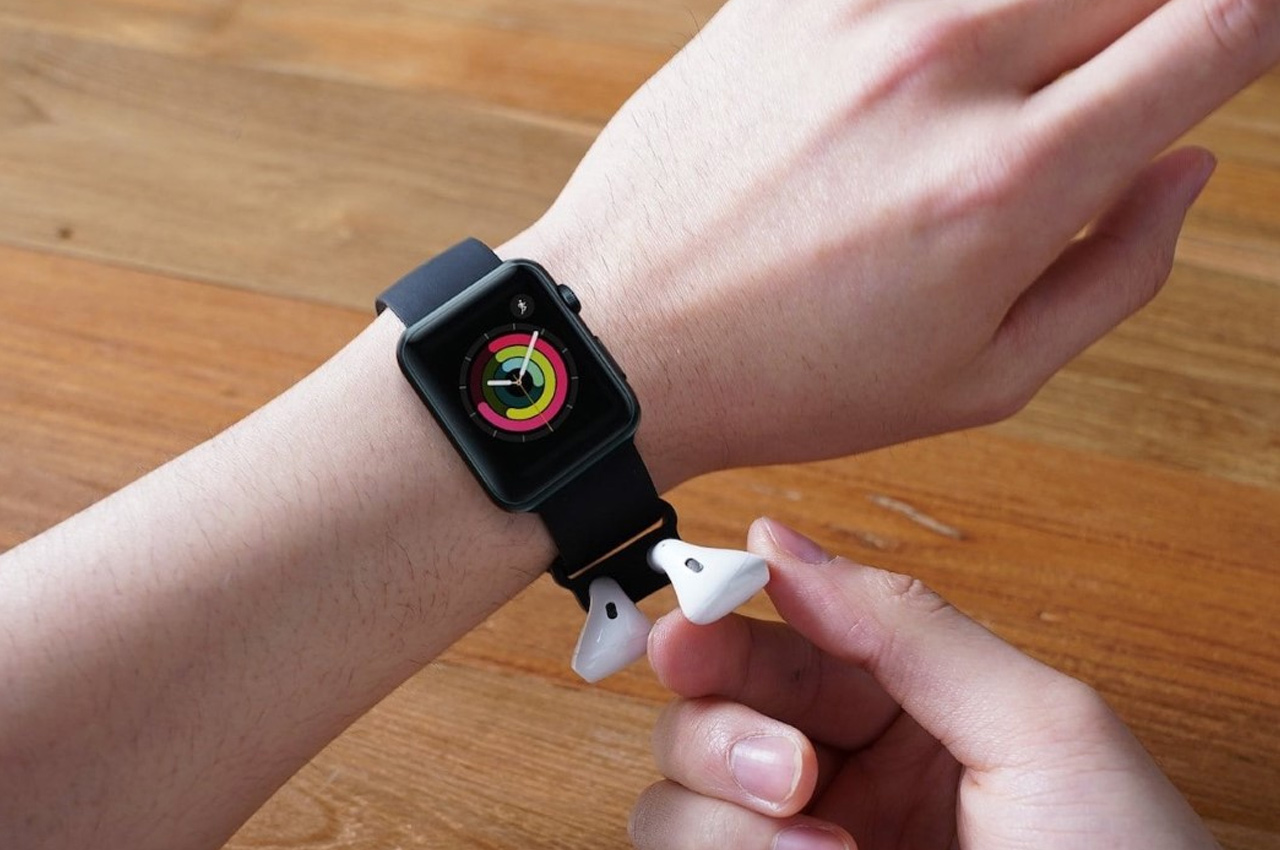 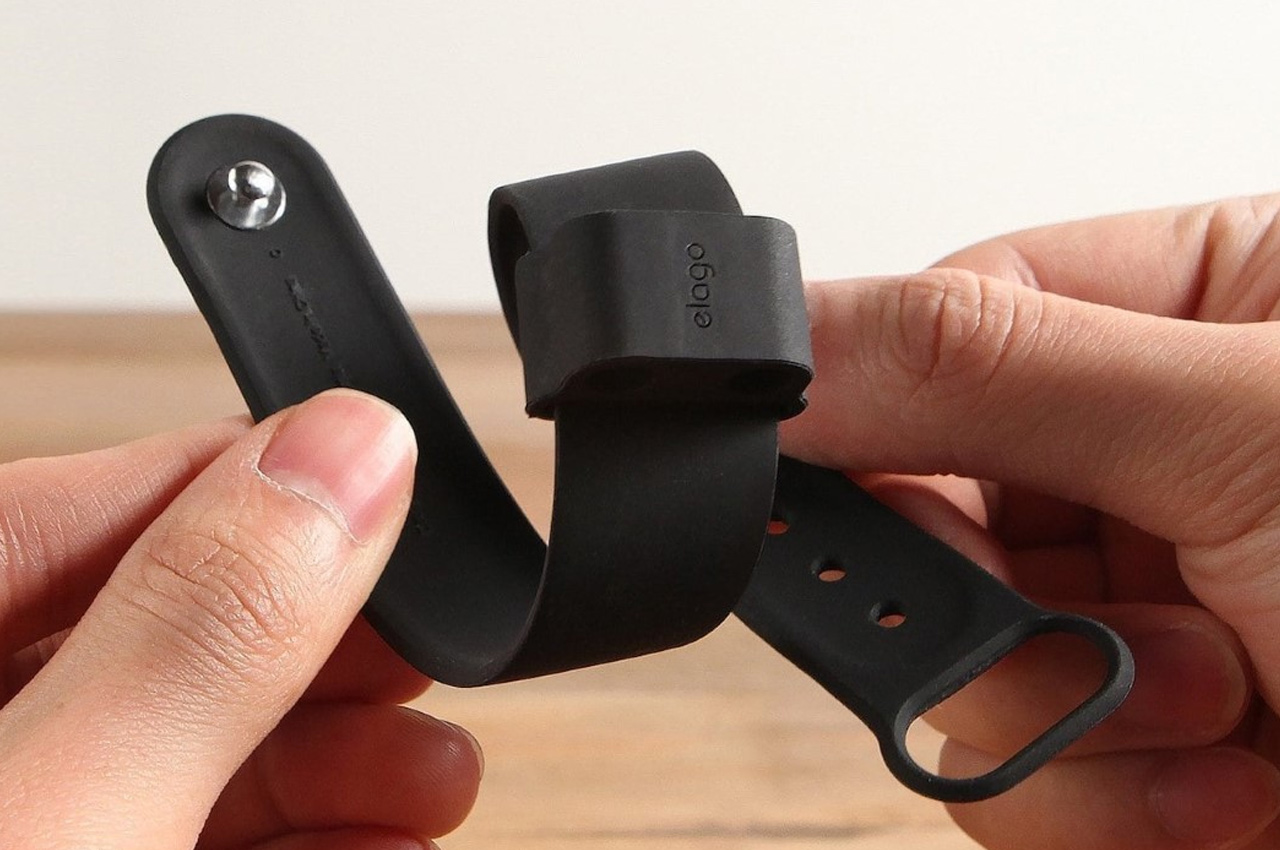 Elago’s products are just sensible and help you use your Apple products more efficiently. Take for instance the Wristfit, a band for your Apple Watch that lets you conveniently dock your Airpods in them too. At the time of their release, the Airpods were criticized for being too ‘easy to lose’. This spawned a wide variety of products like the Elago Airpods strap that helped you secure your expensive earpieces in place, eliminating the danger of losing them. The Wristfit is another such ‘sensible’ product that simply gives you the ability to dock your Airpods on your Apple Watch. Keeping them in a place that’s easy to access, the Wristfit secures the Watch around your wrist, and the Airpods right on the strap like a sort of holster for your earphones. Push them right in when you’re not using them and you won’t have to worry about them at all. 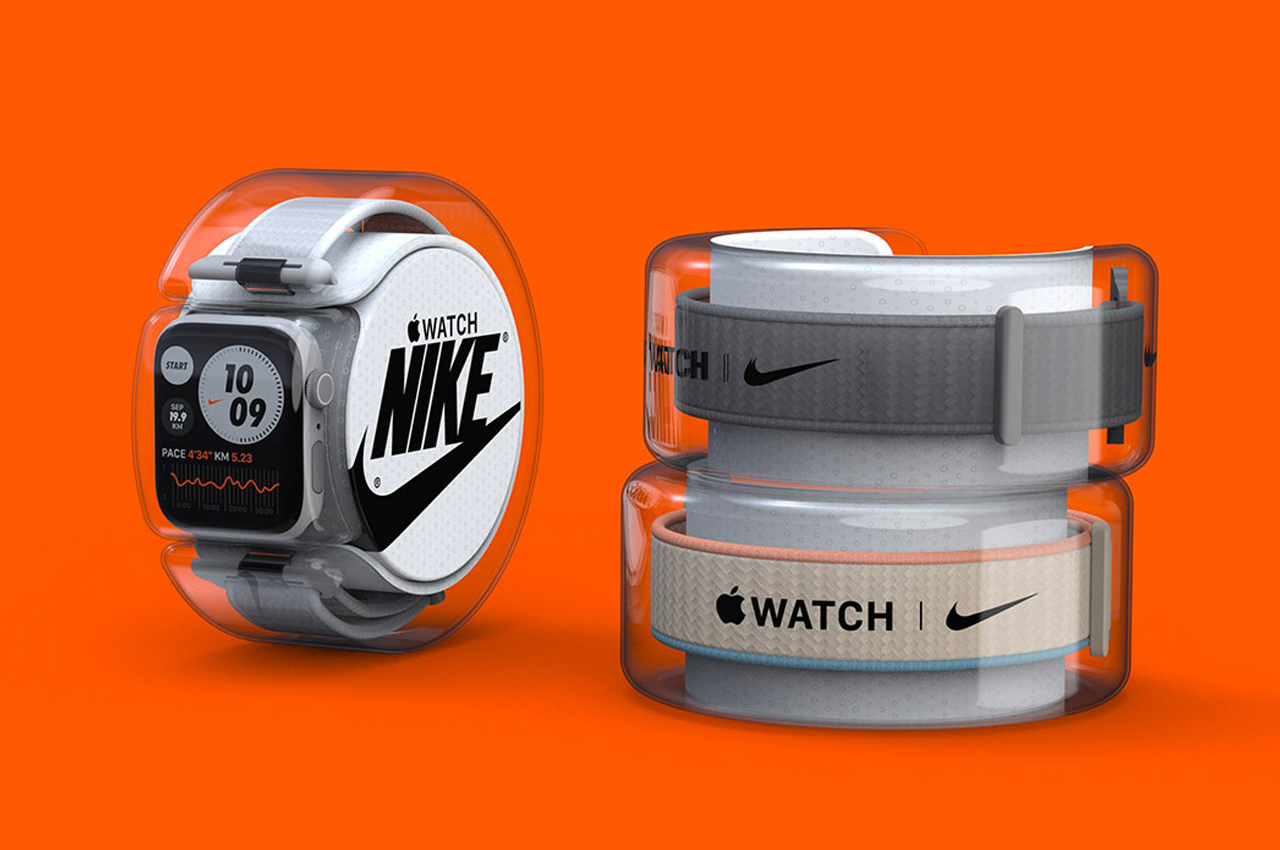 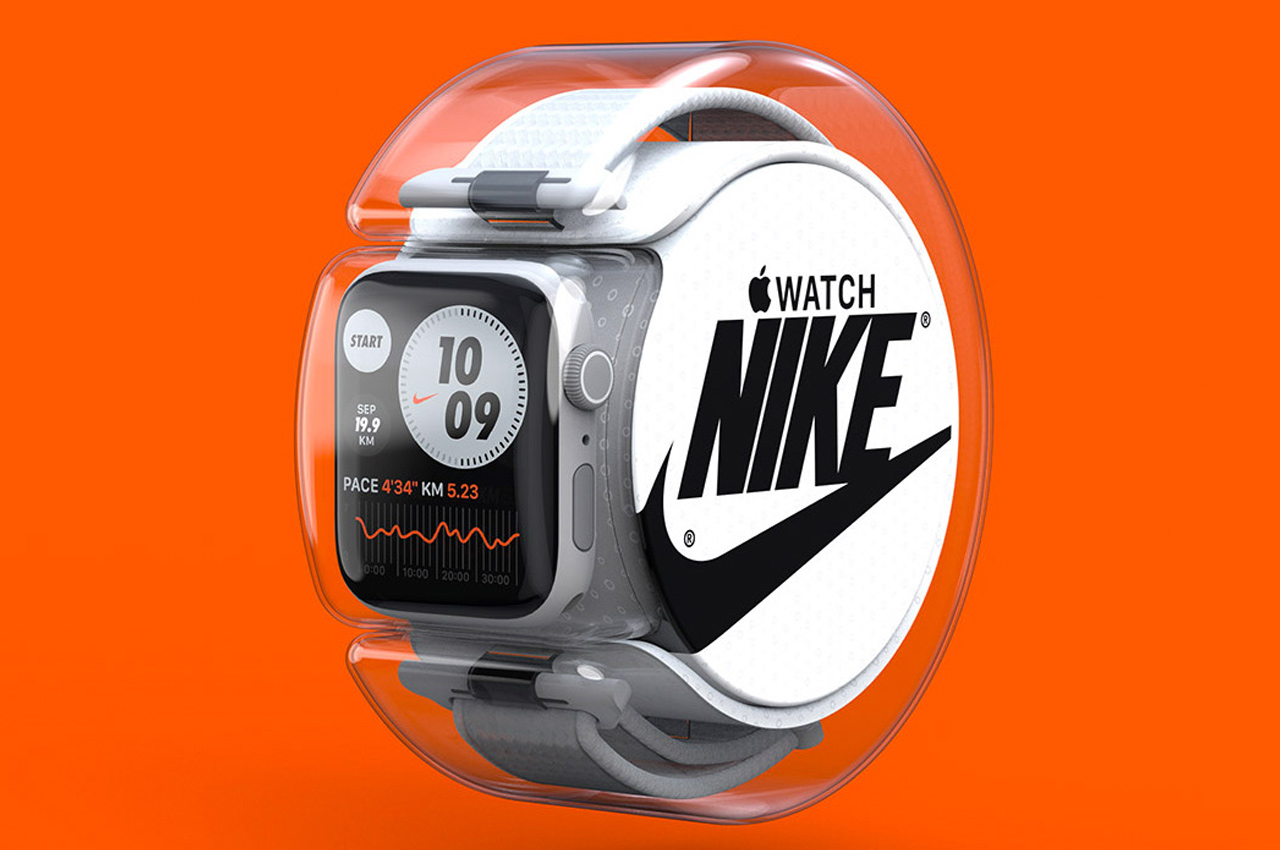 Inspired by the packaging design for the iPod, Nisbet adopted a clear and transparent package for the Apple Watch as well. The transparent packaging comes in two parts, one protects the screen of the watch, whereas the other part forms a protective layer around the strap. But here’s where it becomes interesting, the packaging of the strap has been designed in such a way, that you can slide it on and off! This allows you to try on straps of different styles, letting you mix and match, till you settle on a combination that you like. You can try on the various packaged straps on your hand, so you can see how they would actually look on you! The clear protective layer ensures that no one actually ends up touching the straps, and they are in pristine condition, preventing them from getting dirty or contaminated before they are even sold (especially useful in these COVID-19 times).

Why shouldn’t your clock be a speaker and vice versa?! That’s the idea behind Playtime – a hybrid analog clock/Bluetooth audio player. With its oversized…

When you’re working outside or even within your home and you need to charge your device, something as simple as plugging into outlets can sometimes…