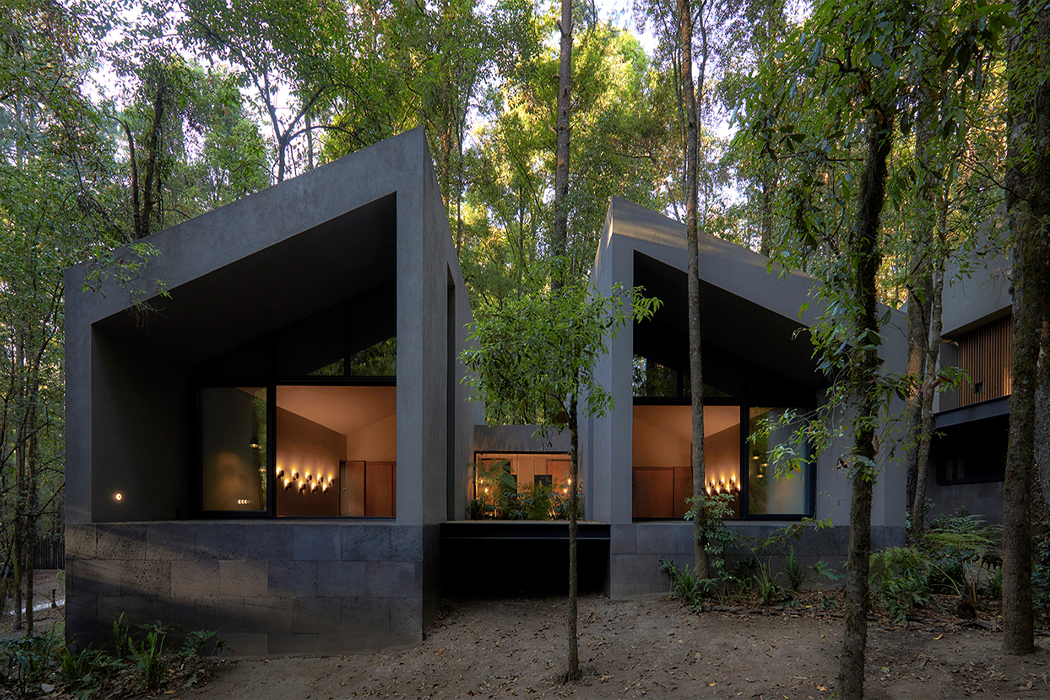 In response to the world’s climate crisis, architects have been designing homes and cabins that leave a small footprint on the area where it’s built. Tiny mobile homes that don’t require an in-ground foundation have surged in popularity, as well as homes with an architectural layout that weaves the building’s frame through the natural paths created by the area’s pre-existing vegetation and trees. Inspired by the forest’s natural canopy and crisscrossing natural sunlight, Mexico City’s architecture studio Weber Arquitectos built a holiday cabin from volcanic stone that integrates the land’s trees into the cabin’s living spaces.

Comprising a total of 5,000 m2 of forested land, Rancho San Simón makes up a cluster of five cabins located deep in the forests of Mexico’s Valle de Bravo, a coastal town popularized as a weekend getaway. Drawn and built to cause as little disruption to the pre-existing landscape as possible, the five cabins of Rancho San Simón weave between the forest’s scattered trees and actually incorporate their trunks and canopies into Rancho San Simón’s layout. Stationed beneath the trees’ cavernous canopies overhead, the builders of Rancho San Simón punctuated the cabins’ patios and terraces with tree trunks, offering the illusion that the cabins somehow emerged from the ground below.

The cabins’ semi-outdoor pitched roofs tilt with the forest’s sloped terrain and create deep terraces with high roofs that morph them into forest caverns. Oriented in a way that provides viewpoints for every window, each cabin of Rancho San Simón comes with its own terrace that merges with the trees. The expansive windows rise from the cabin’s floor to its high ceilings, formed from geometric angles and framed with treated wood lattices that strain the natural sunlight pouring in from outside.

Primarily constructed from volcanic stone, Rancho San Simón carries an internal structure derived from local pine trees that warms up the cabin’s grey exterior with hearty wooden beams and pillars. Inside and out, Rancho San Simón exudes warmth with a white oak interior and presents as a wooded haven in the dark of the forest. 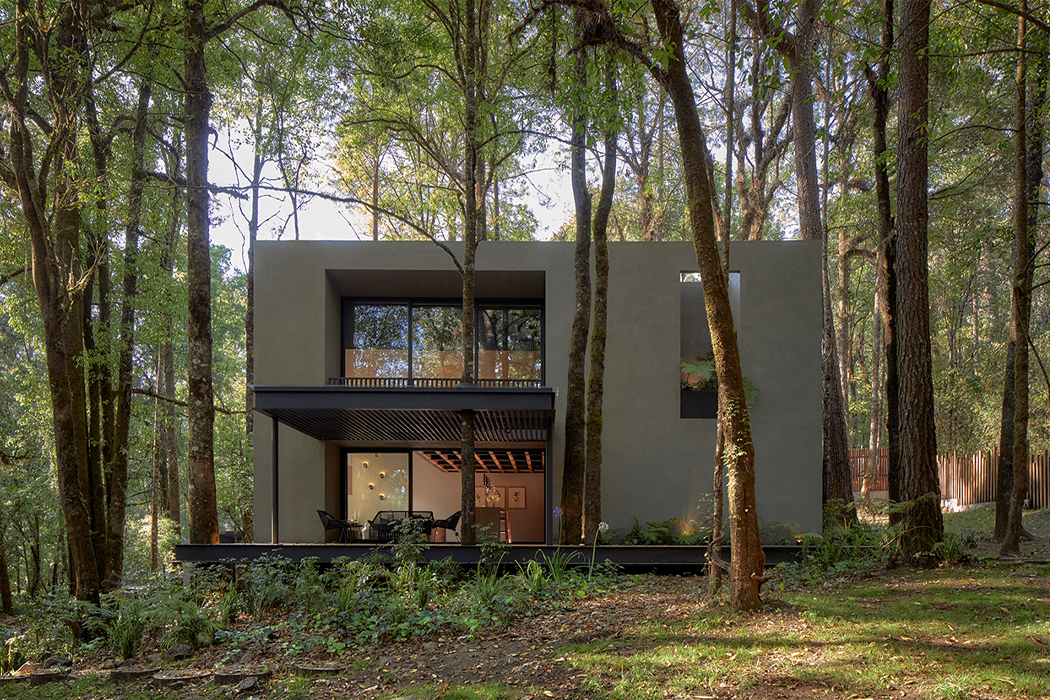 Fully integrated into Valle de Bravo’s forests, Rancho San Simón follows a layout that weaves between the trees to not disrupt the pre-existing landscape. 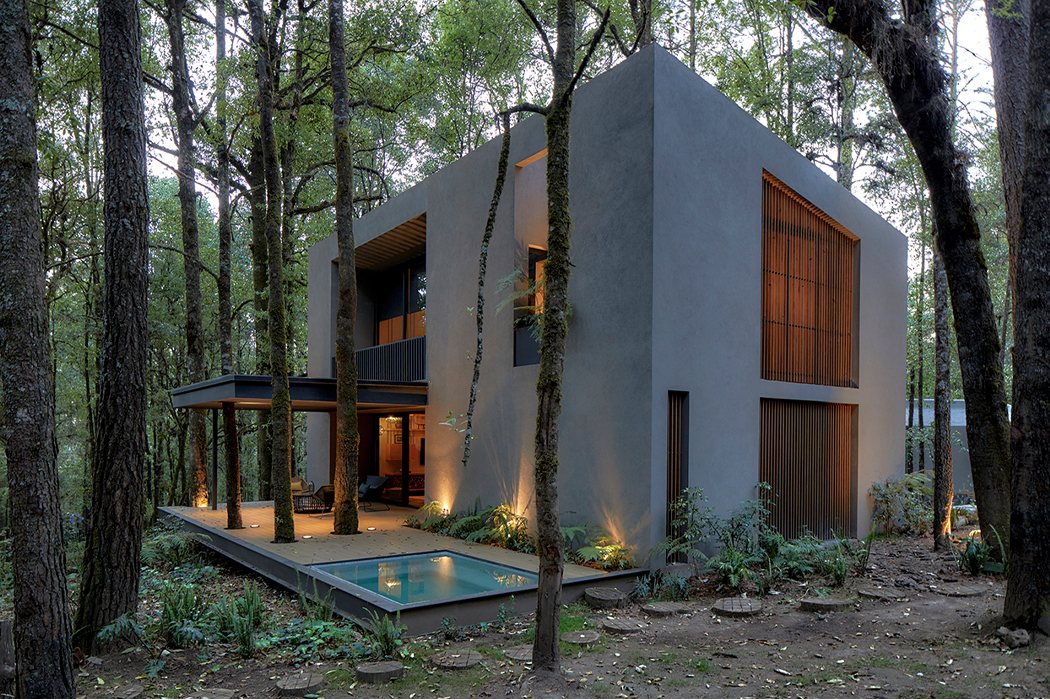 The patios of Rancho San Simón merge with the trees, allowing their trunks to bloom through the patio’s floor. 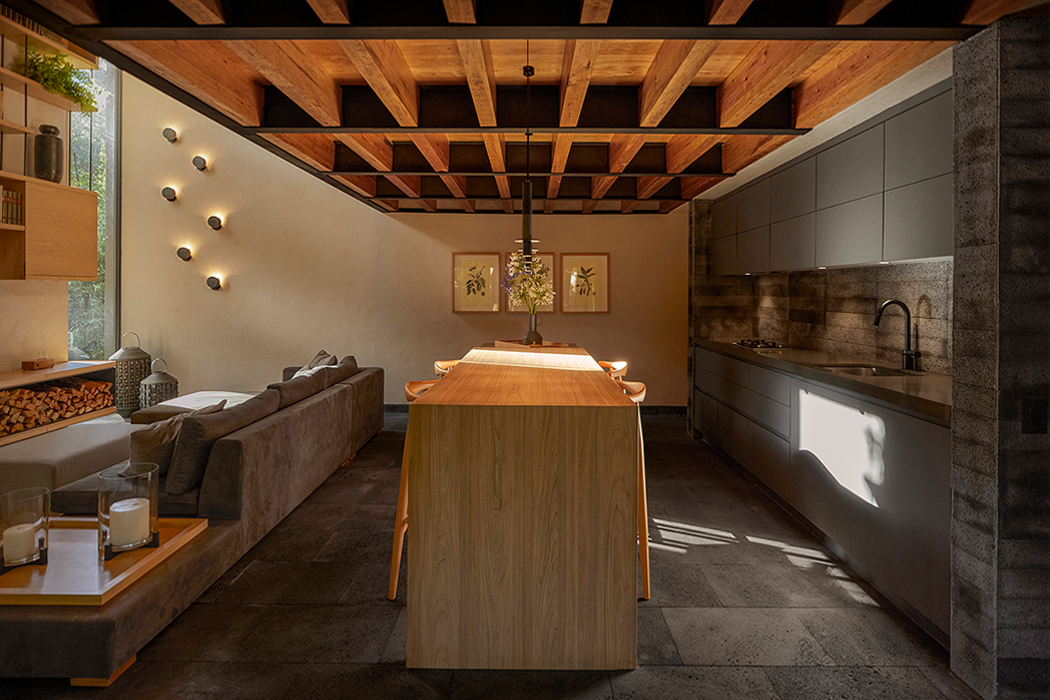 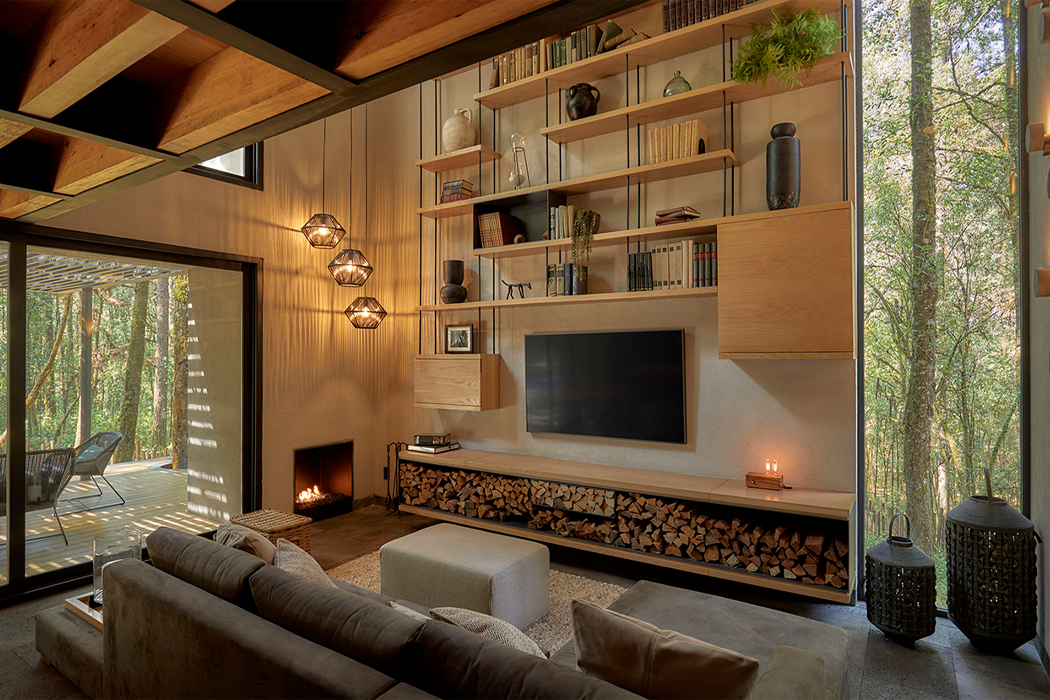 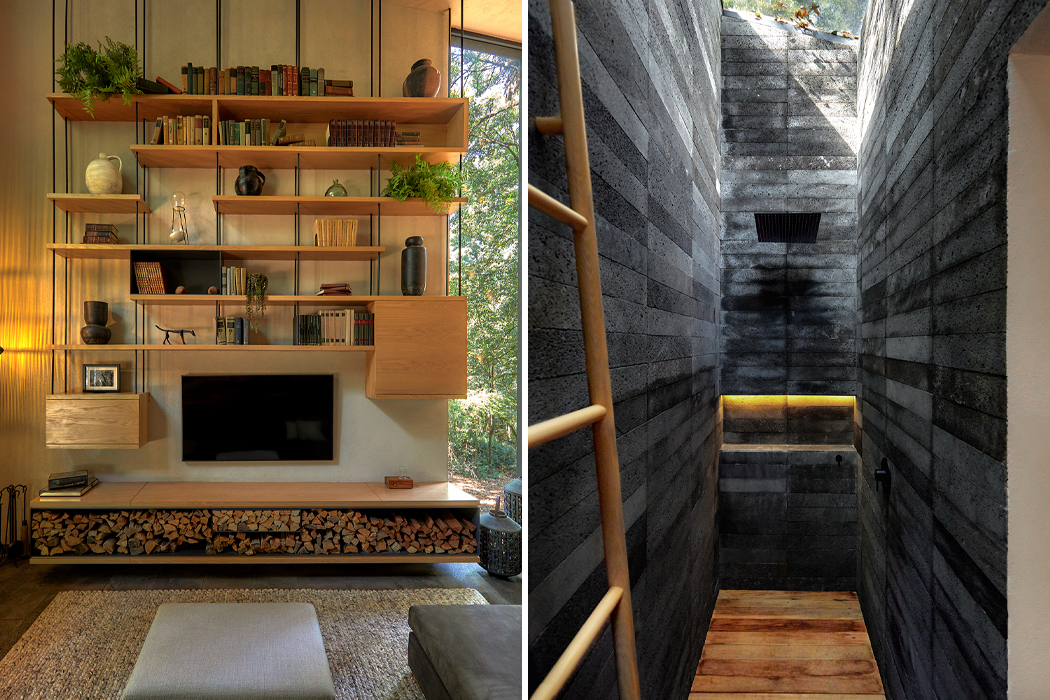 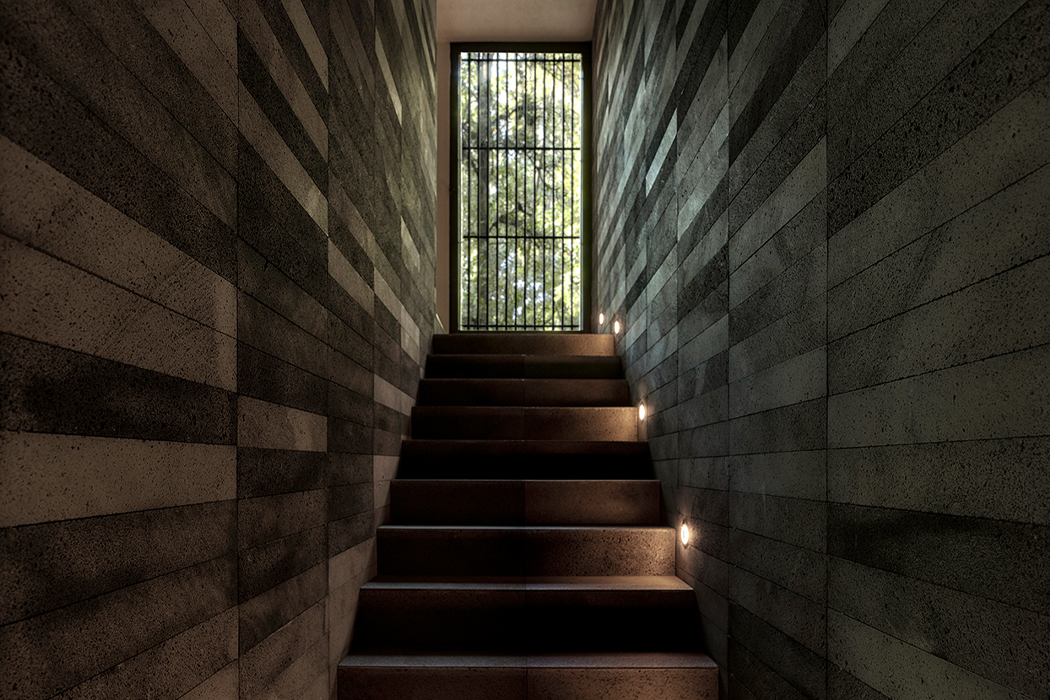 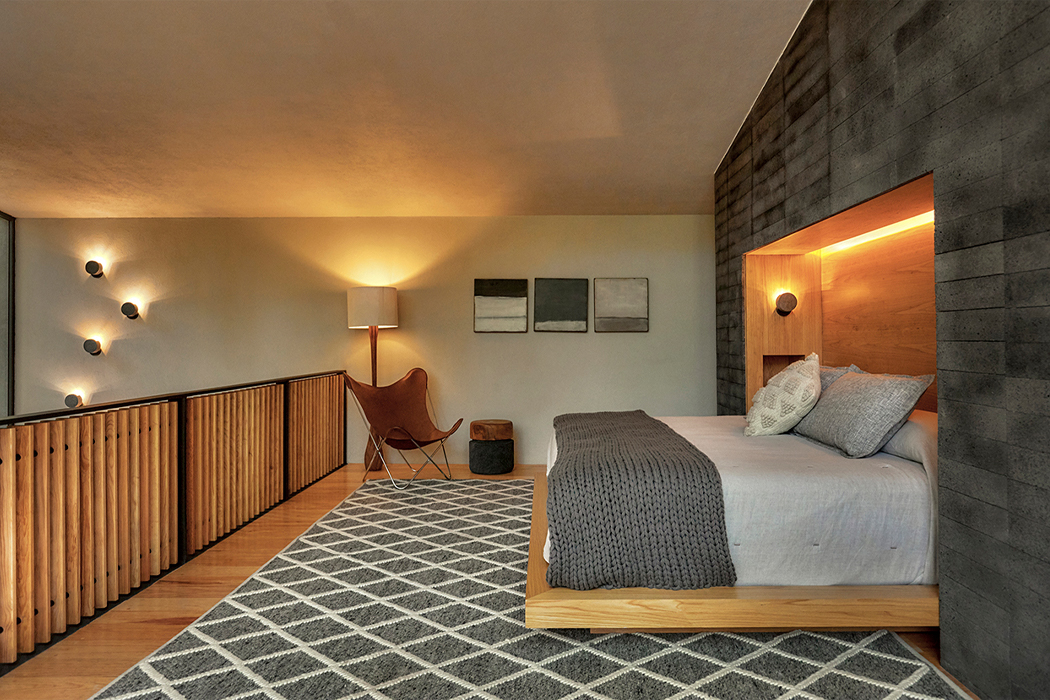 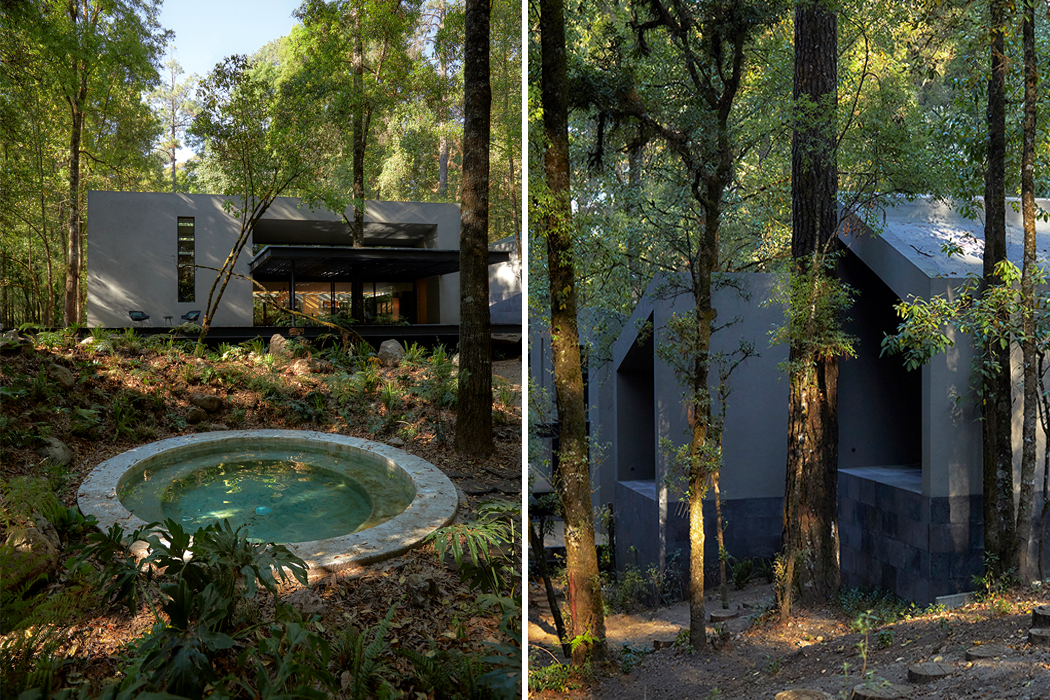 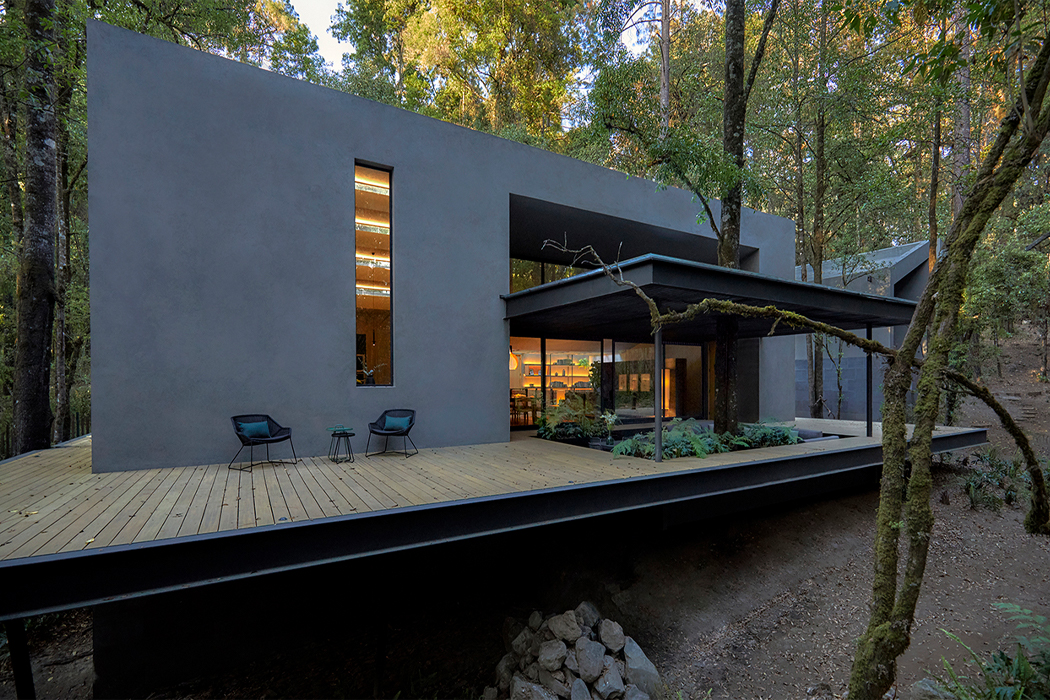 The cabin’s patio levels the buildings against the sloped forest landscape. 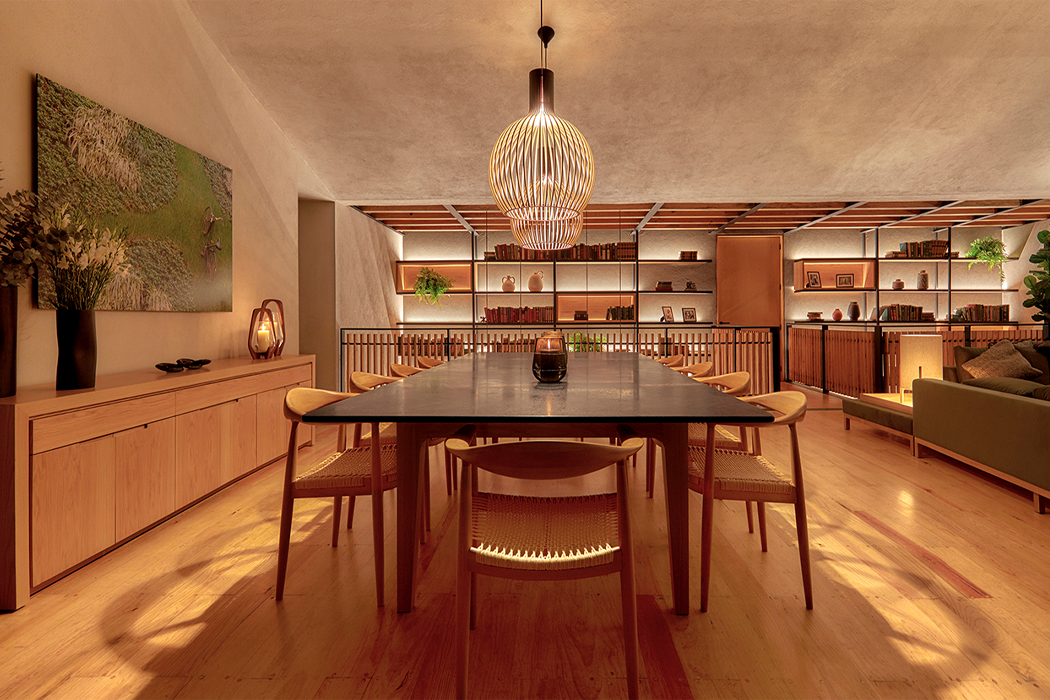 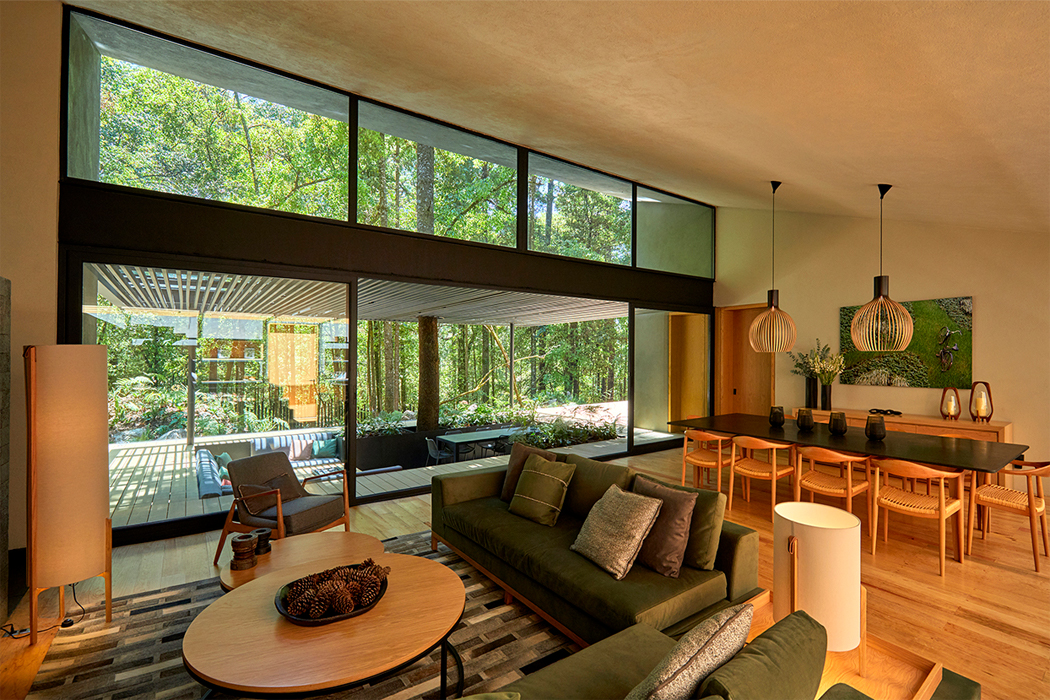 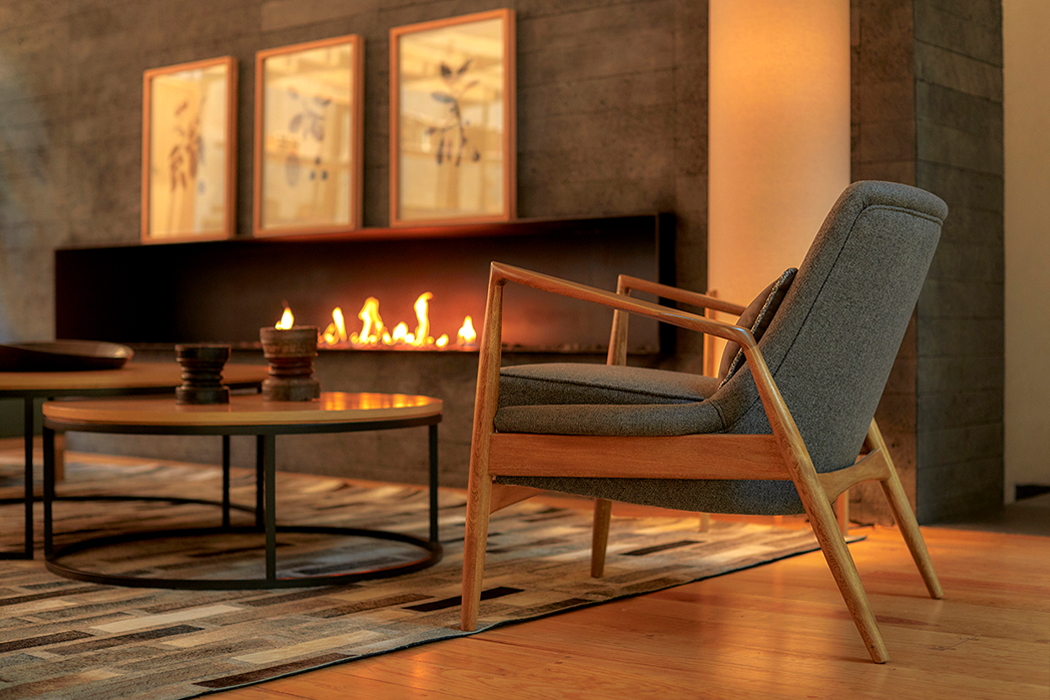 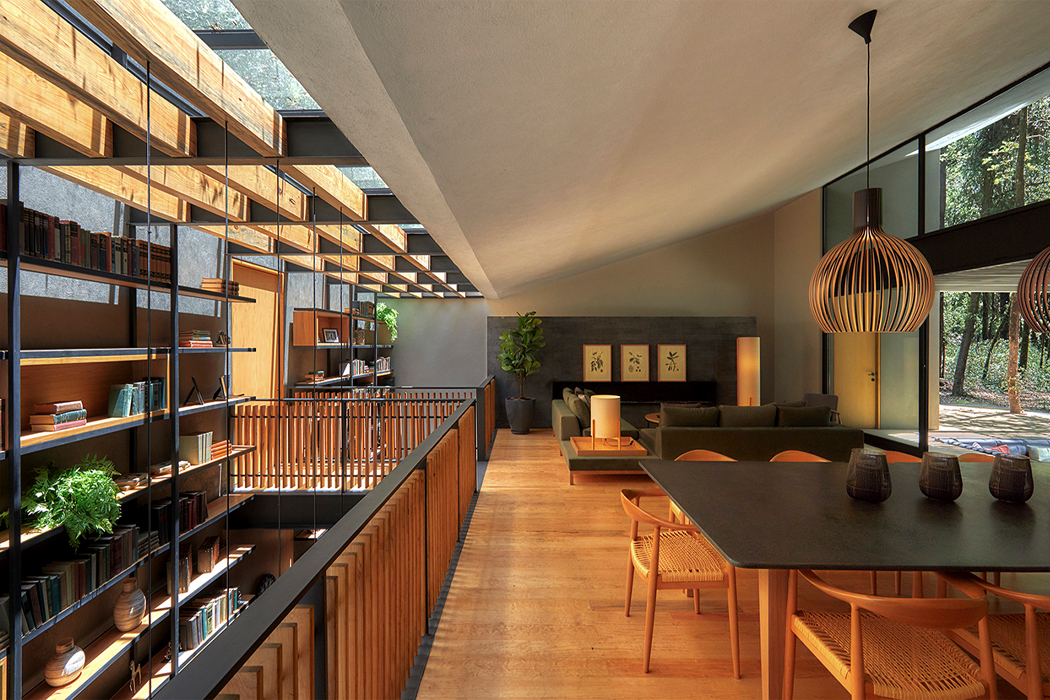 Skylights pour sunlight from the home’s ceiling, drenching each cabin in natural light. 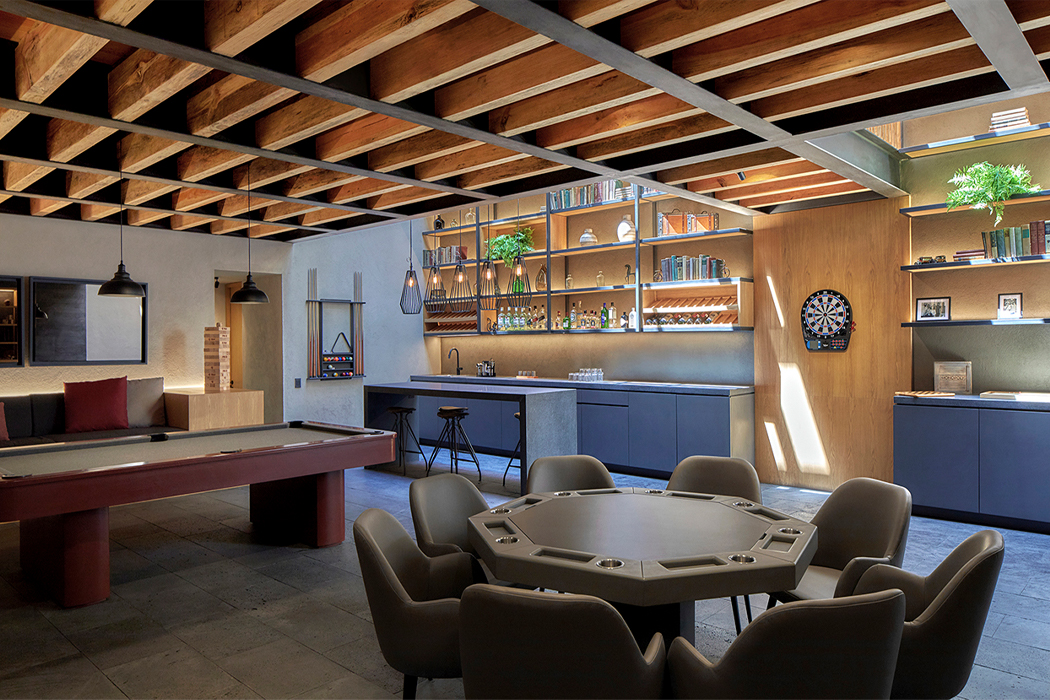 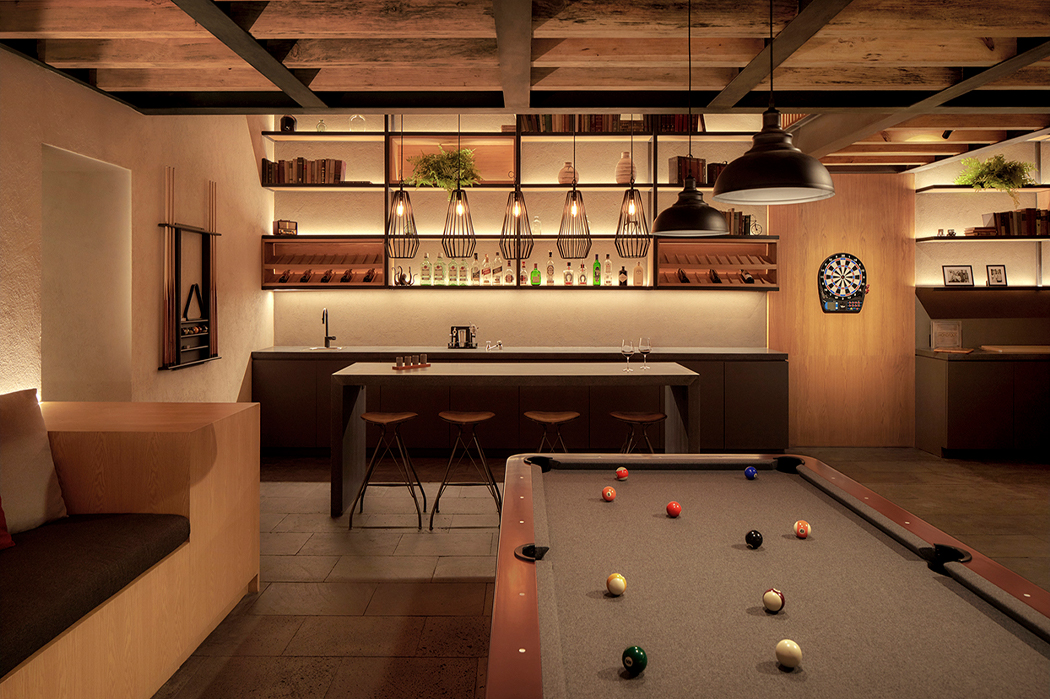 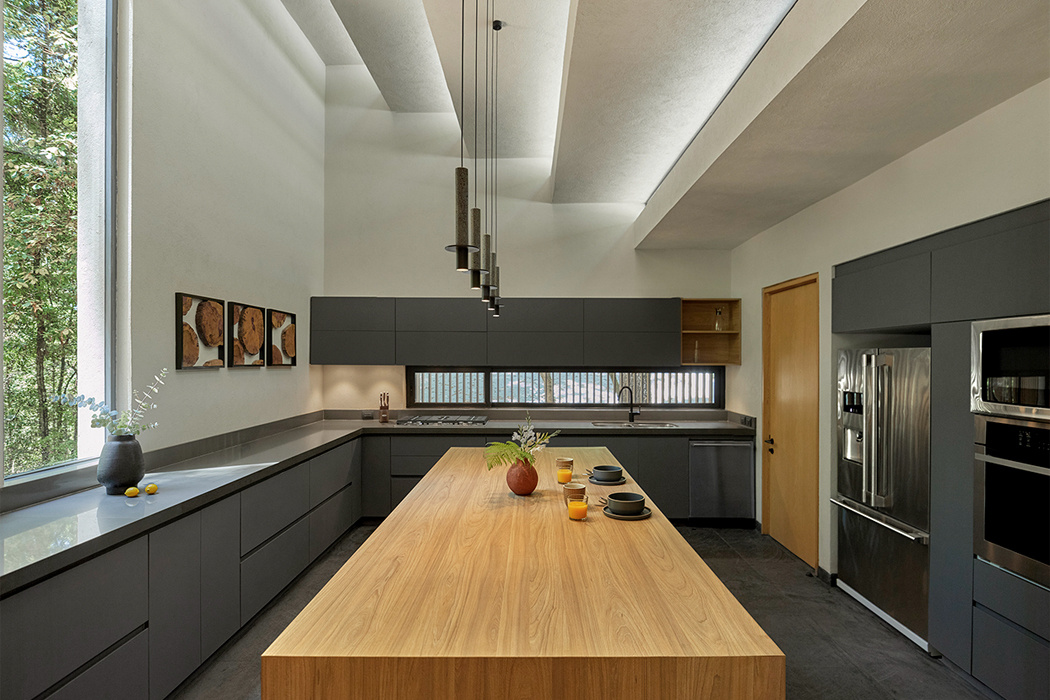 Muted white walls brighten interior living spaces like the kitchen, using natural resources like sunlight to open up the room. 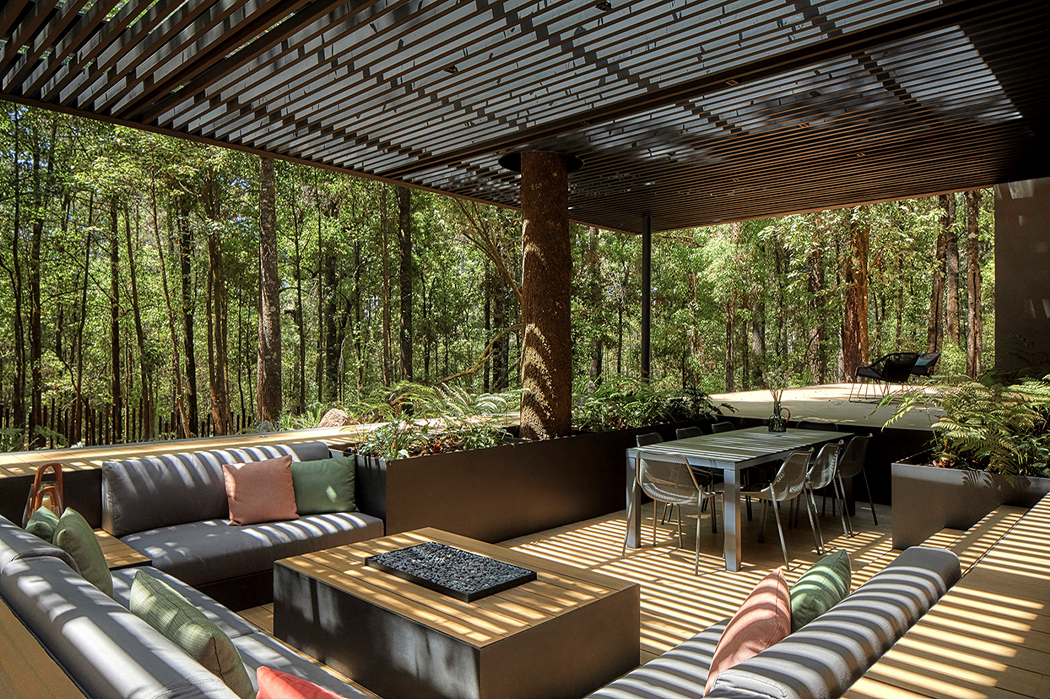 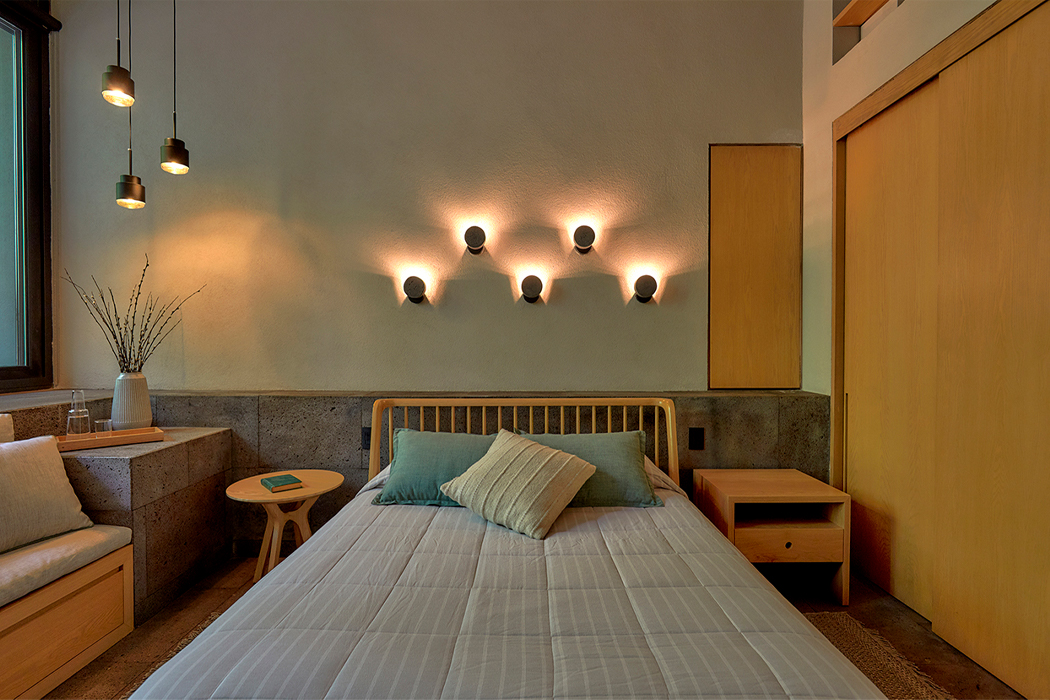 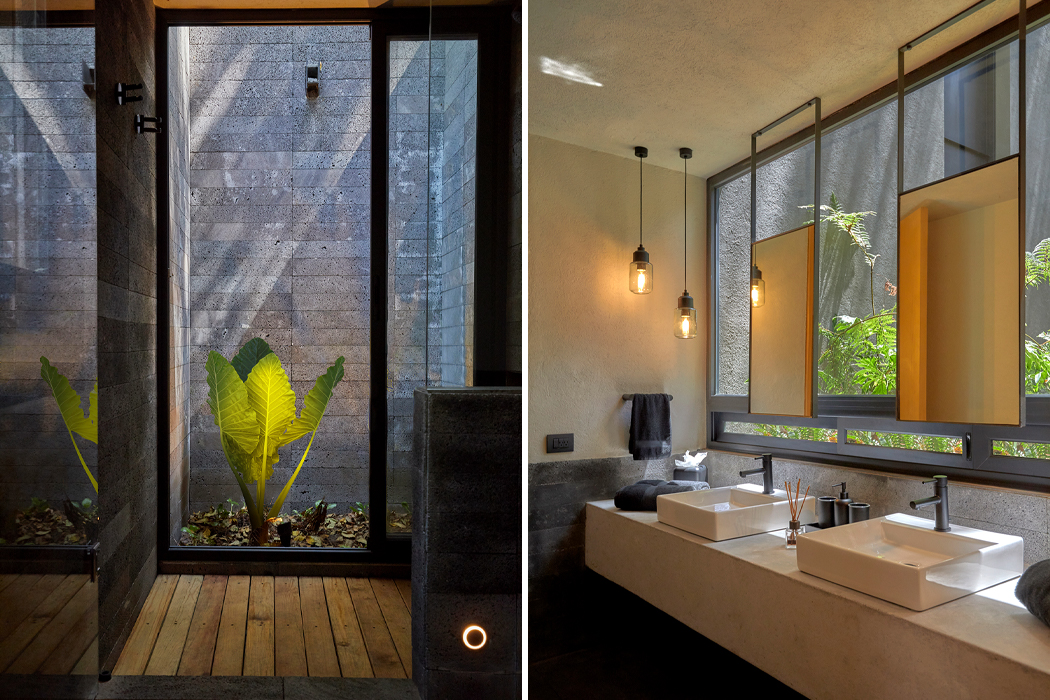 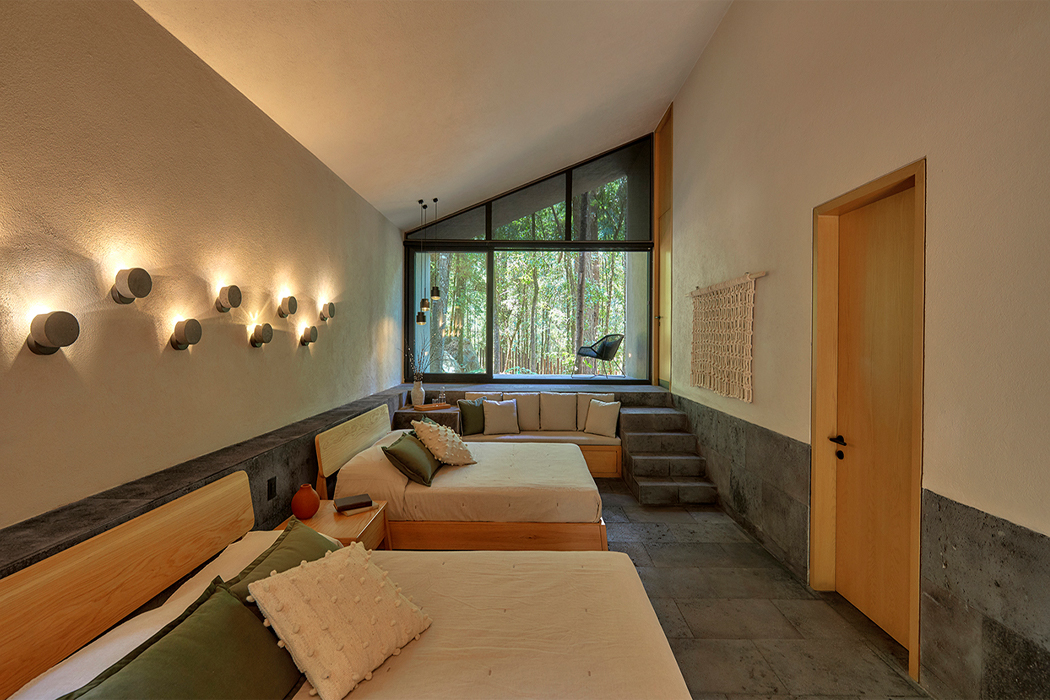 The entire cord is stays whichever way you style it. It’s got a flexible electrical lining that allows the entire chord to take part in…

Modern Additions in not so Modern Homes

Crazy question. Would we still have trains in the future? Designer Igor Neminov has it all figured out. Not only will we have trains, they’ll…

The product you see before you is called the “Human Antenna.” Before I explain how it works, an anecdote shall soften the blow: Today, ironically,…