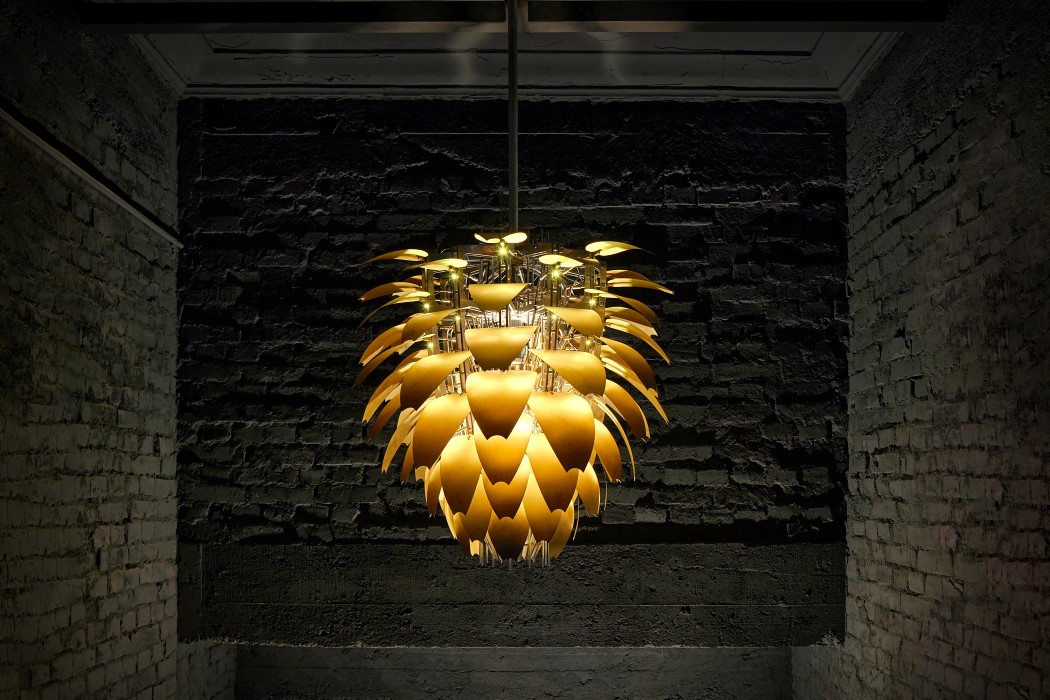 Chandeliers, unlike lamps, serve an important dual purpose. Their job isn’t just to fill a room with light, it’s to form a mesmeric illuminated art-piece often located in the center of a hall for people to admire. The Core chandelier by Hsin Lee does it pretty well, with a design inspired by the appearance and the ‘maturing’ of a pine cone. Multiple copper leaves on the Core chandelier are connected to a central mechanism that gets the chandelier to open up, filling the room with soft beams of light that dance around as the Core opens and shuts. The shimmering copper leaves create their own shimmering reflections too, turning the chandelier into an instant attraction that is difficult to take your eyes off of. 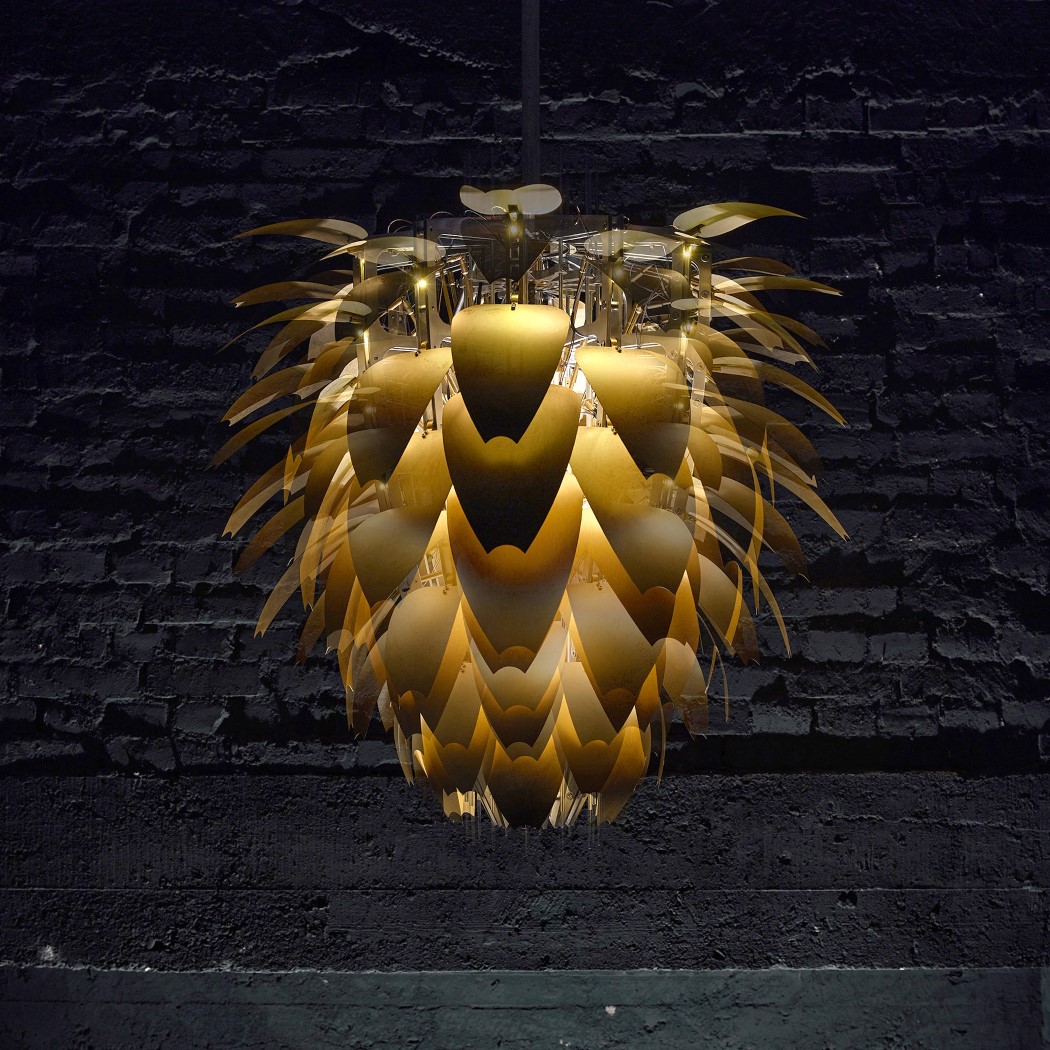 The Core currently sits in Kawabata Intcraft, an 84-year-old Japanese-style art club. It hangs on a high ceiling directly above the spiral staircase, prompting the viewer to look at it as they climb up. Its gradual opening and closing action also brings the space to life, making it look as if it’s breathing. 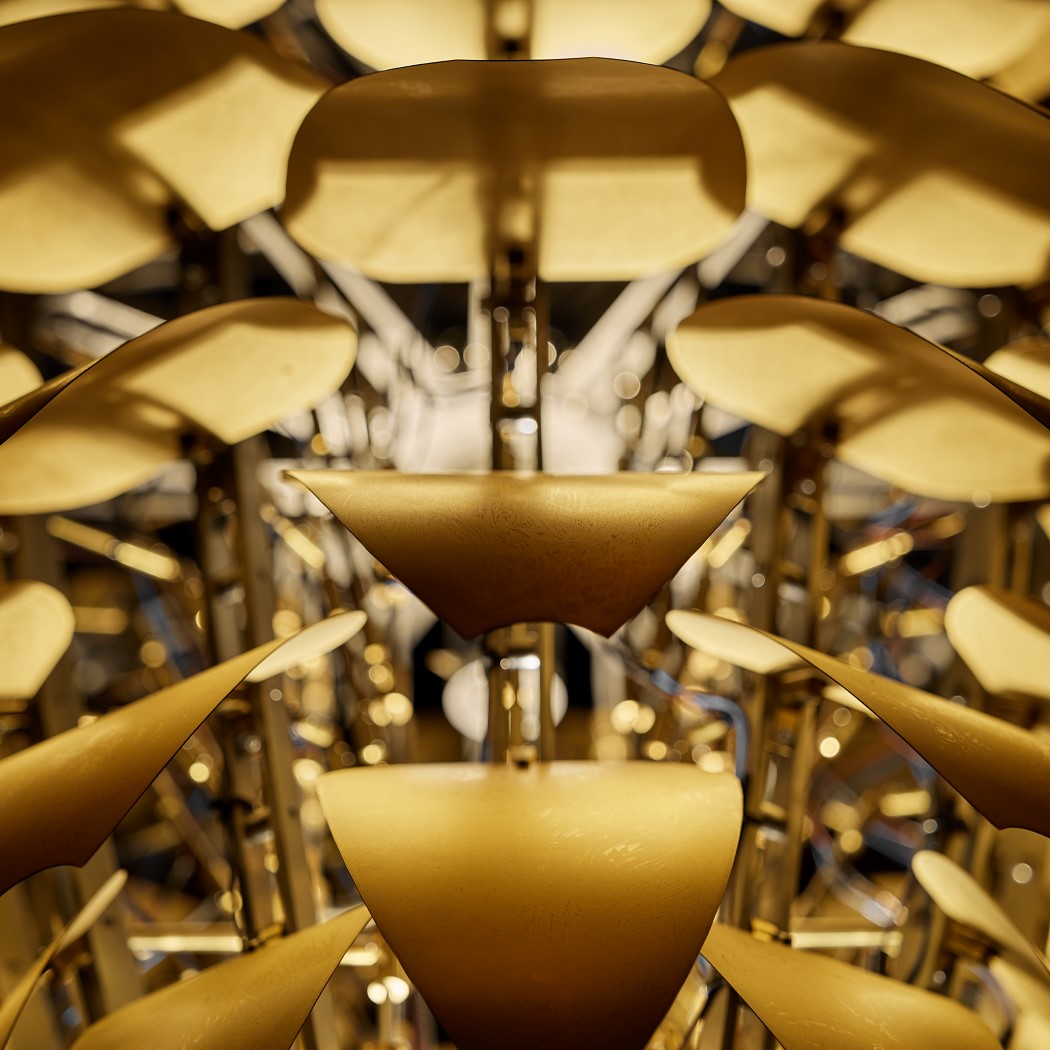 The kinetic sculpture relies on multiple moving parts assembled together. Designed to be just about as intricate as an umbrella, the Core’s insides sit within its copper shell, and aren’t immediately visible to the viewer. They work almost in the background as the copper petals sit around them like an exoskeleton, and the moving petals cast a kaleidoscope of light beams and fragments, keeping the eye occupied. Core is made out of 87 unique brass pieces, relying heavily on precise mechanical engineering. Each part is detailed crafted in collaboration with a self-made CNC machine to bring the experience to life. 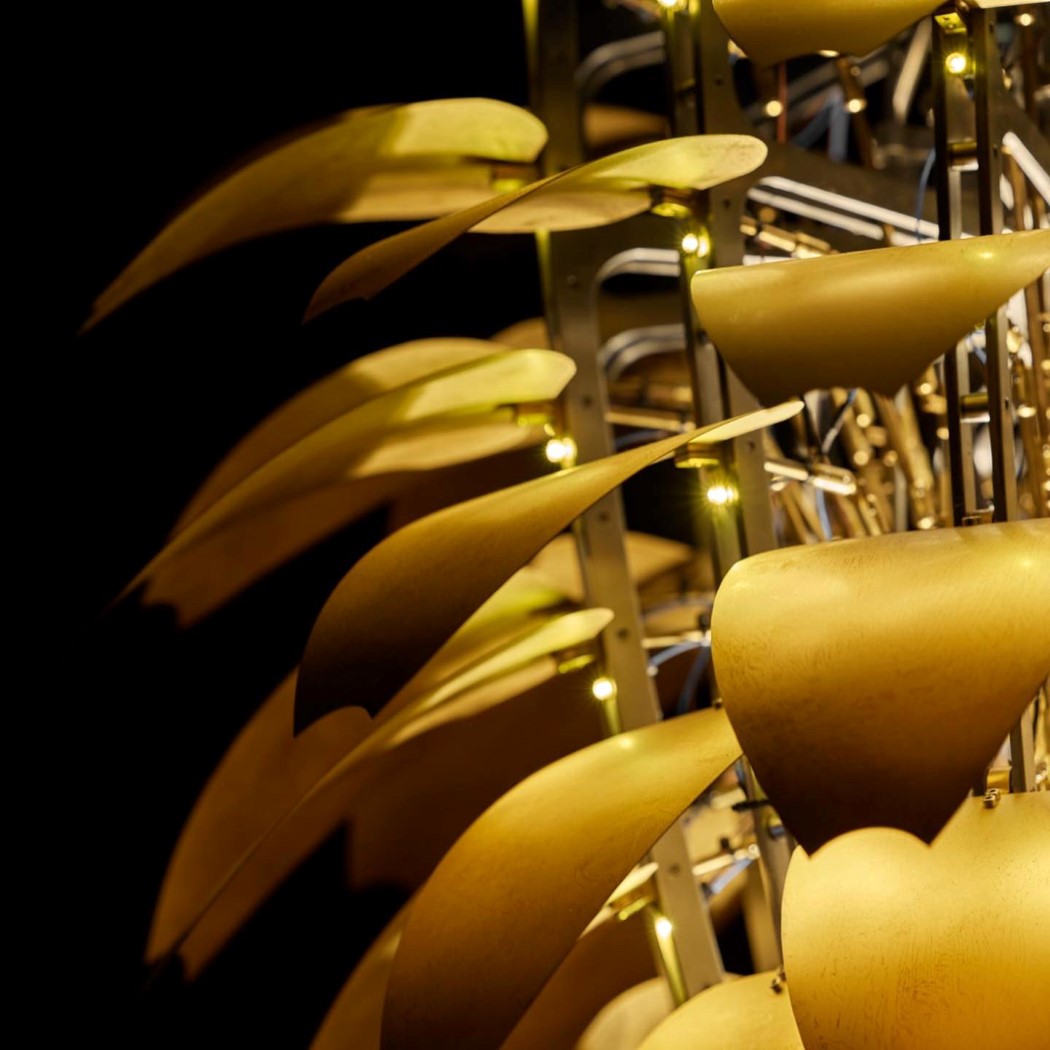 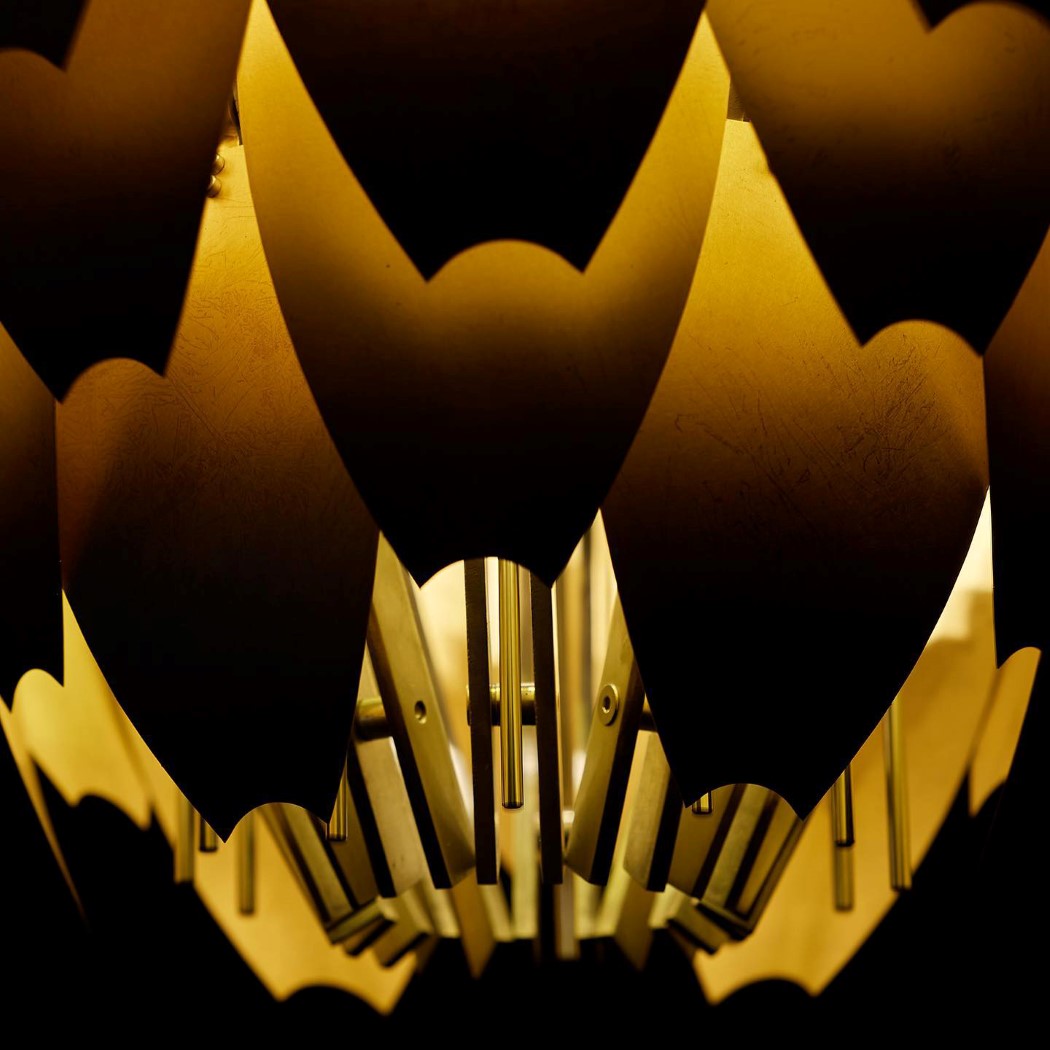 “The purpose of this project is to study the relationship between artistic sculpture and historical building”, says designer Hsin Lee. After learning that instead of demolishing the 84-year old Kawabata Intcraft building (which was previously a police station), it was in fact, being preserved as an art club, Lee “hoped to bring it back to life in an artistic way. The concept and name Core was born accordingly, in the shape of a pine cone to resembles eternity”.

The Core kinetic chandelier is a Bronze Winner of the A’ Design Award for the year 2021. 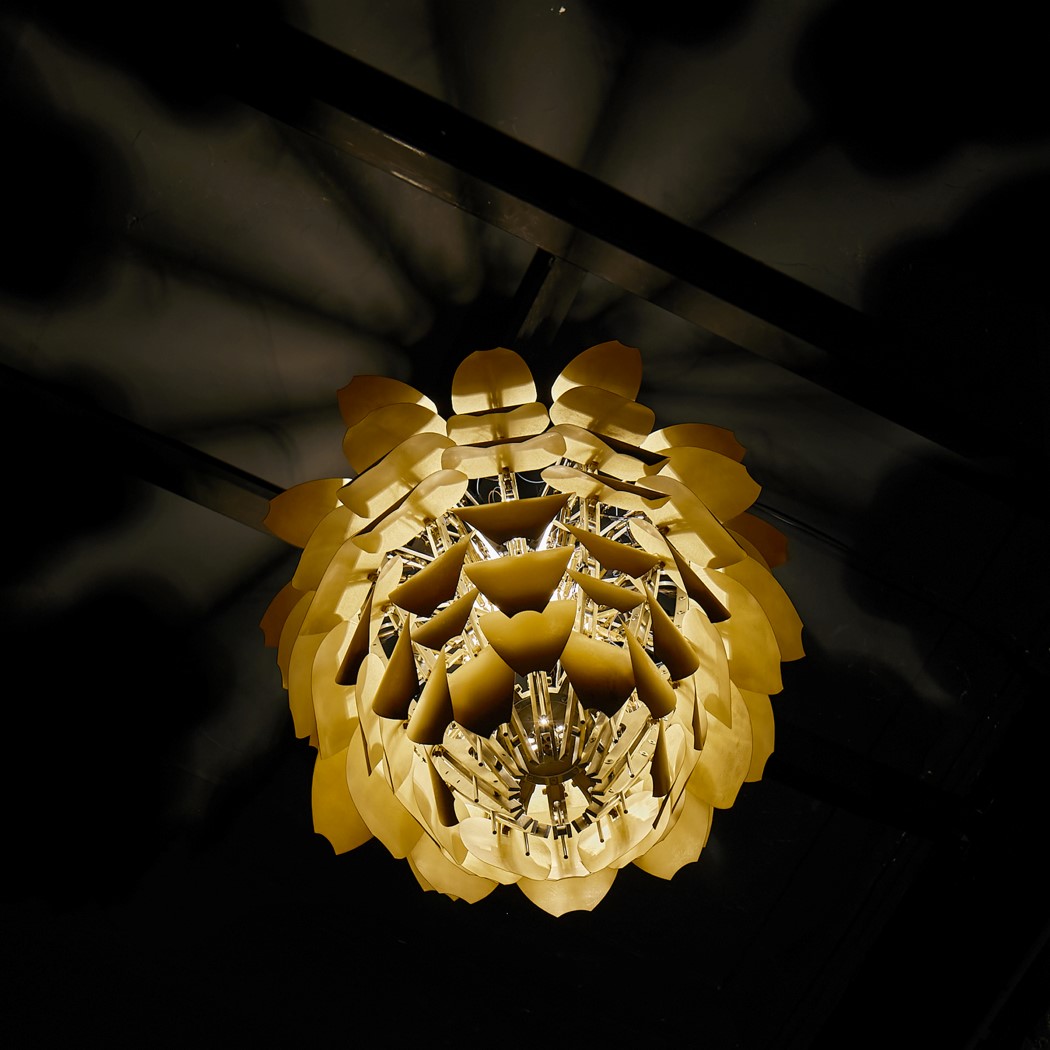 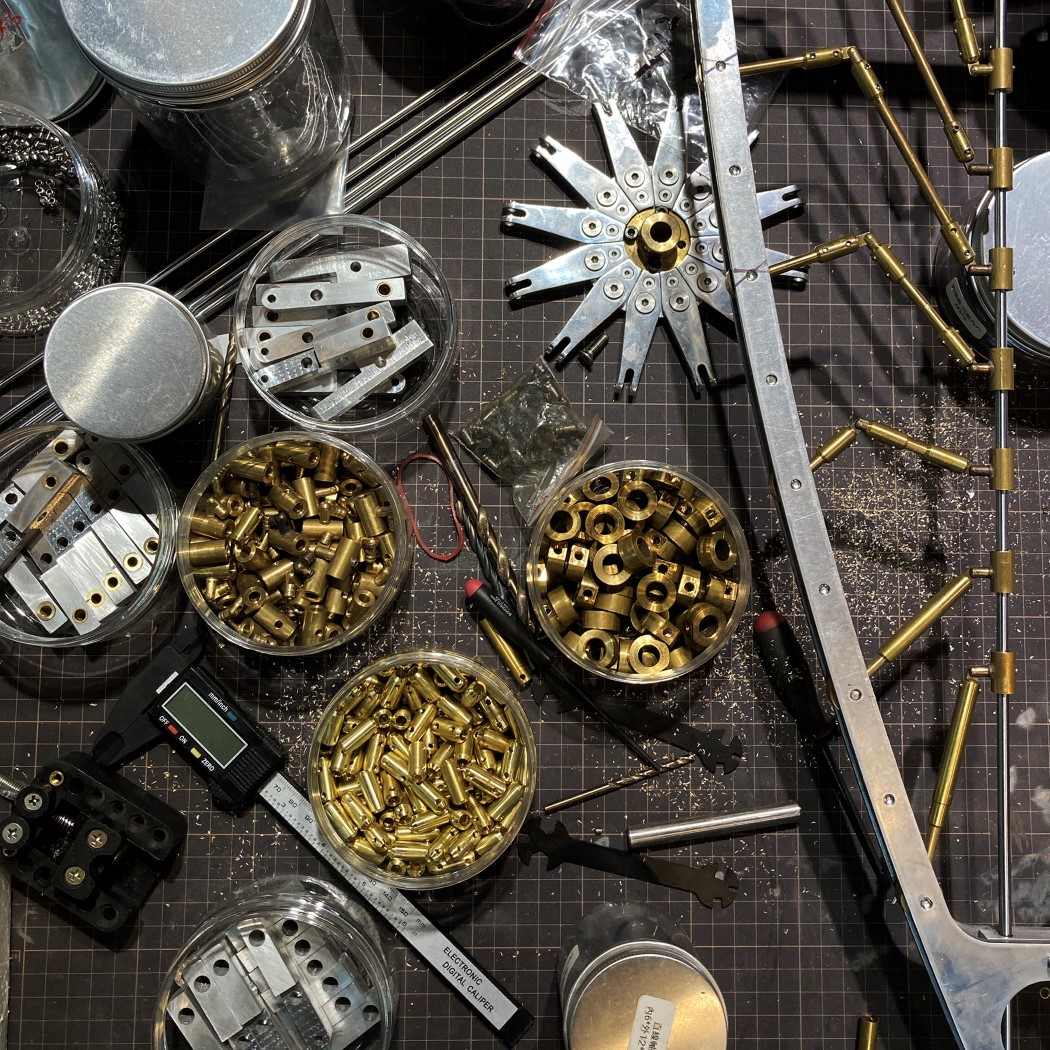 Design the aesthetic of tomorrow’s cars! Tesla is looking for a CMF Designer.

Spearheading the electric vehicle movement on an international scale, Tesla went from being a simple battery-manufacturing company to a company that single-handedly created the electric-car…

Typically this not the phrase you will use to describe an extension cord, but nevertheless, designer by Youngkwang Cho feels that he has the hang…

Those who have severe food allergies know that  a single bite of the wrong substance could be their last. This home food scanner known as…