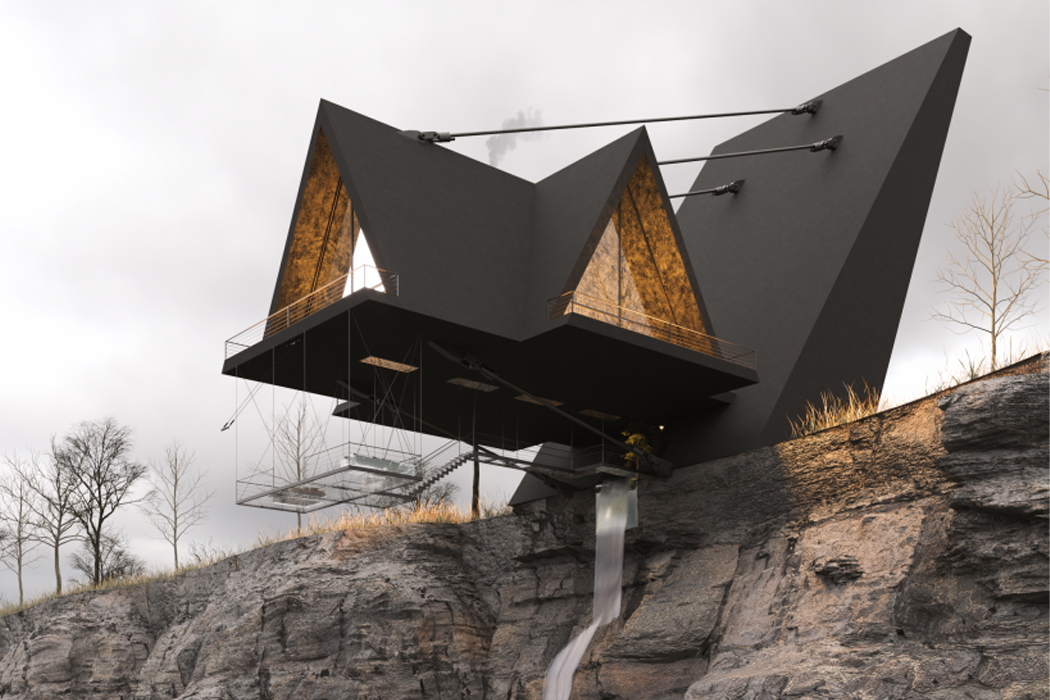 Milad Eshtiyaghi, an international architect based in Iran, designs escapist dream homes stationed in faraway cliffs and shorelines to evoke feelings of wanderlust and nostalgia. Committed to sustainability and green design, Eshtiyaghi’s buildings typically gleam with a minimalist polish, offering a striking contrast to the epic environments where Eshtiyaghi chooses to place them. Milad Eshtiyaghi aimed to achieve this same air of duality with Suspended House, a reinterpreted A-frame cabin that hangs off a California cliffside with the help of five high-tensile support cables.

Peeking out from the cliffs of Mendocino, California, Suspended House hovers in midair. In his rendering, Eshtiyaghi conceptualized Suspended House after choosing its cliffside location. To ensure that the structure would hold tight and remain in place, Eshtiyaghi looked to using five high-tensile support cables and a large foundation mast. The large mast works by balancing the forces of gravity and gently ‘tugging’ the A-frame cabin towards the mast for it to remain upright. In addition to the large foundation mast, five high-tensile support cables securely lodge the cabin in place from all sides.

The land-locked parts of Suspended House remain stable in place and offer a cozy respite from the more daunting facades of Suspended House. For the most part, the entire cabin remains on solid ground except for a hanging living area, left dangling above the Pacific. The living area’s glass floor and furniture only work to steepen this daredevil’s hideaway and turn it into an oasis for those braver than the faint of heart. Sitting near the precipice of the glass floor, hanging above the ocean’s floor, guests can take it one step further and play on the cabin’s swing to soar over the Pacific.

In his rendering, with support from a large foundation mast and five high-tensile support cables, Eshtiyaghi’s Suspended House hangs on the cliffs of Mendocino, California. 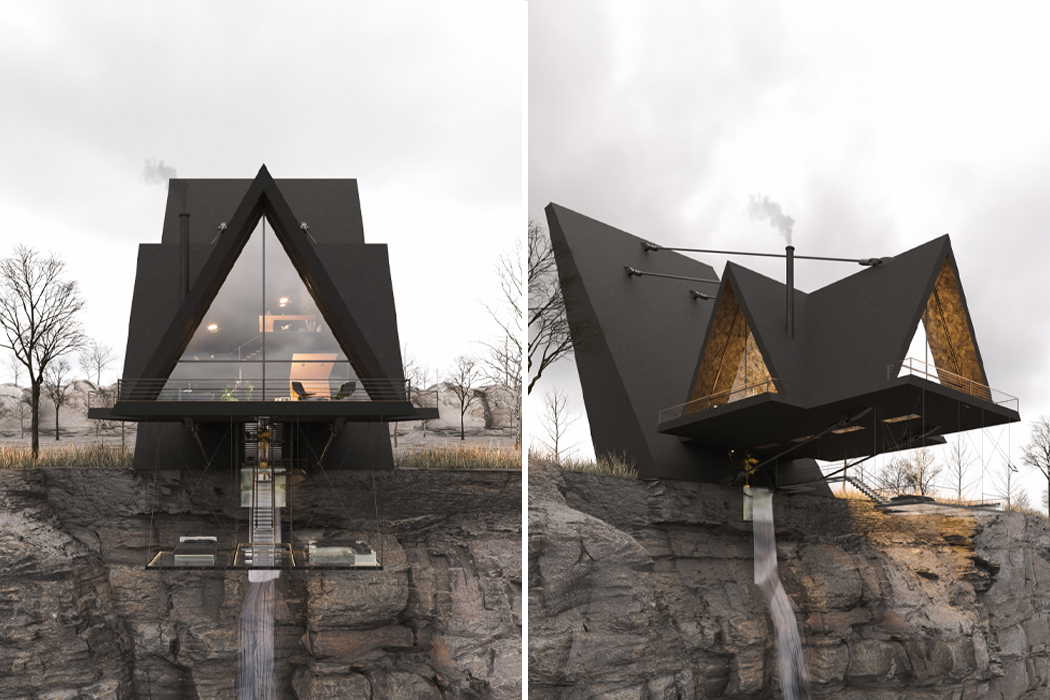 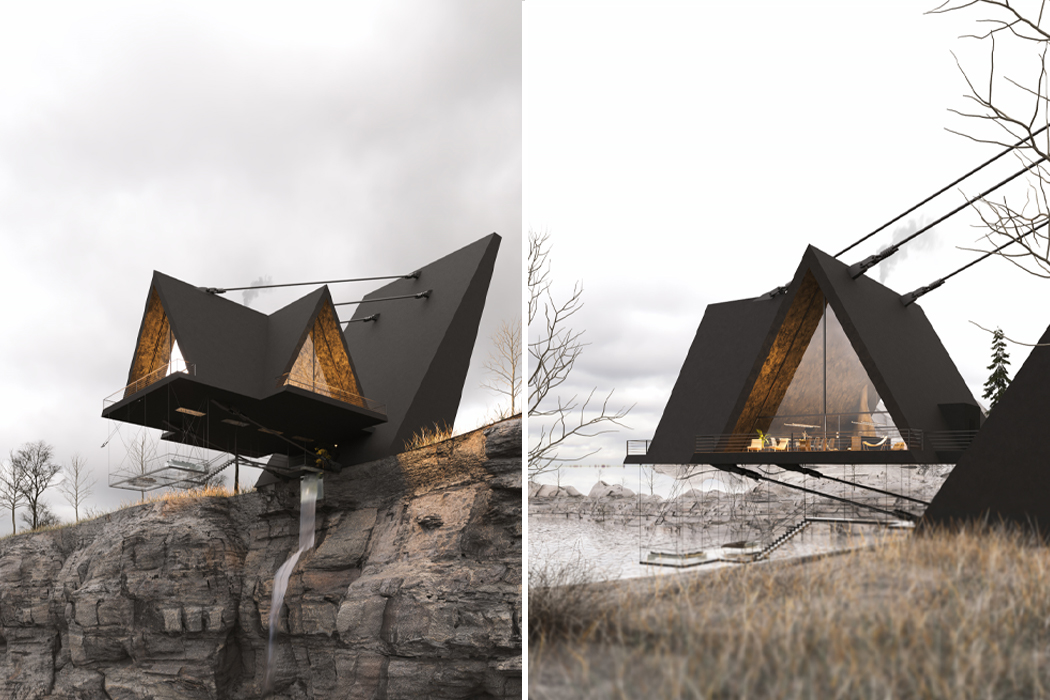 The large foundation mast works by offsetting the structure’s center of gravity. 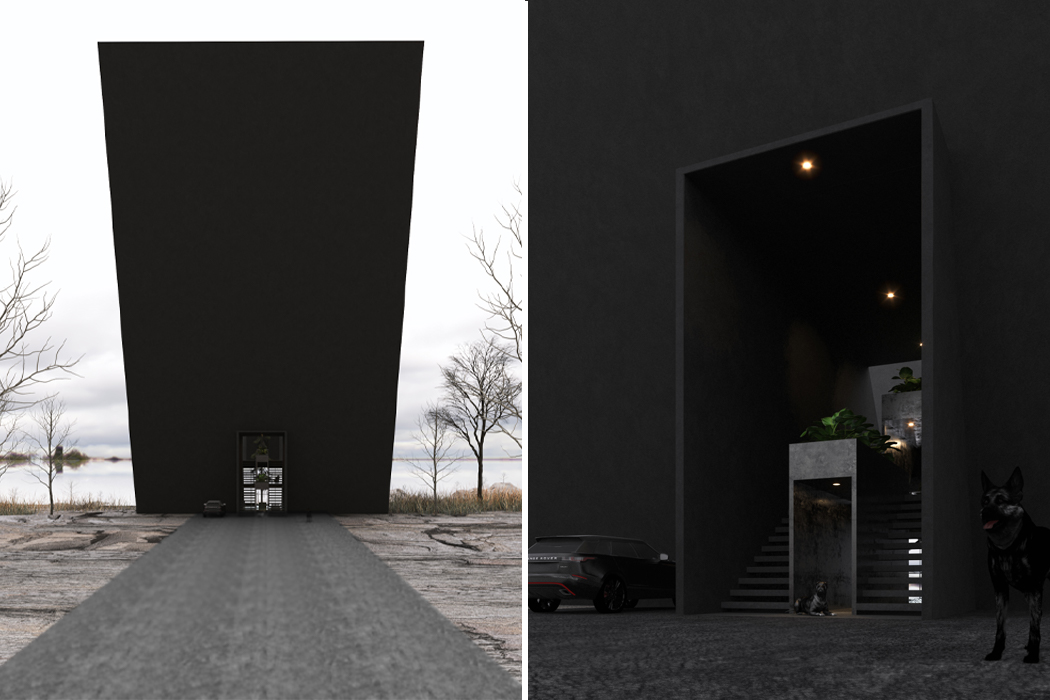 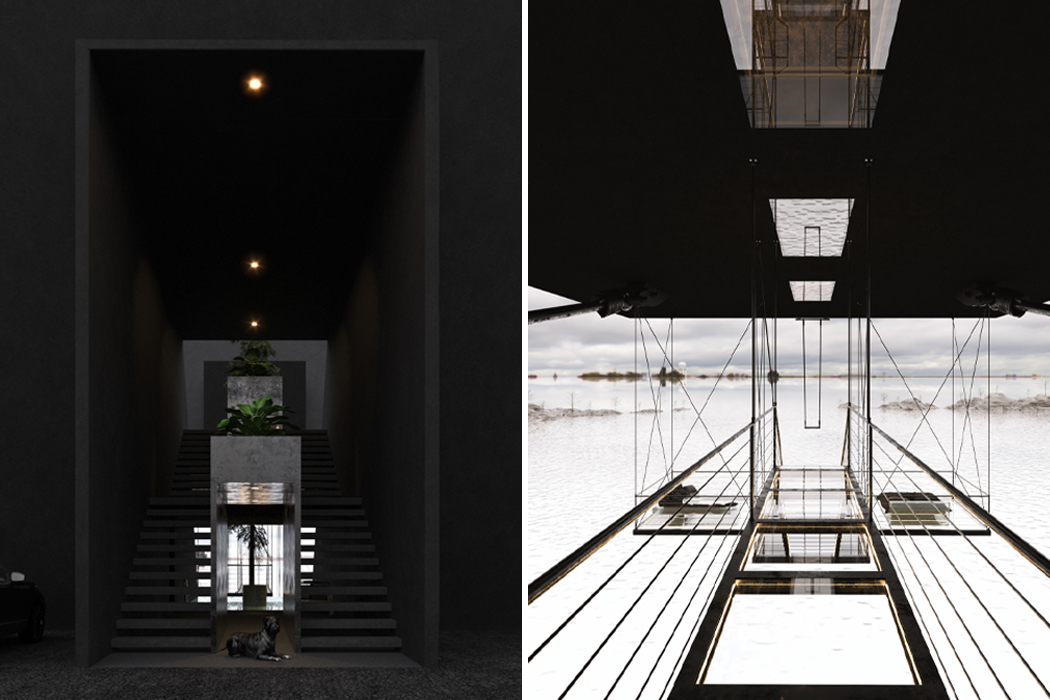 The front of Suspended House features jet-black finishes and dark entryways, while the suspended addition in the rear features entirely transparent floors and furniture. 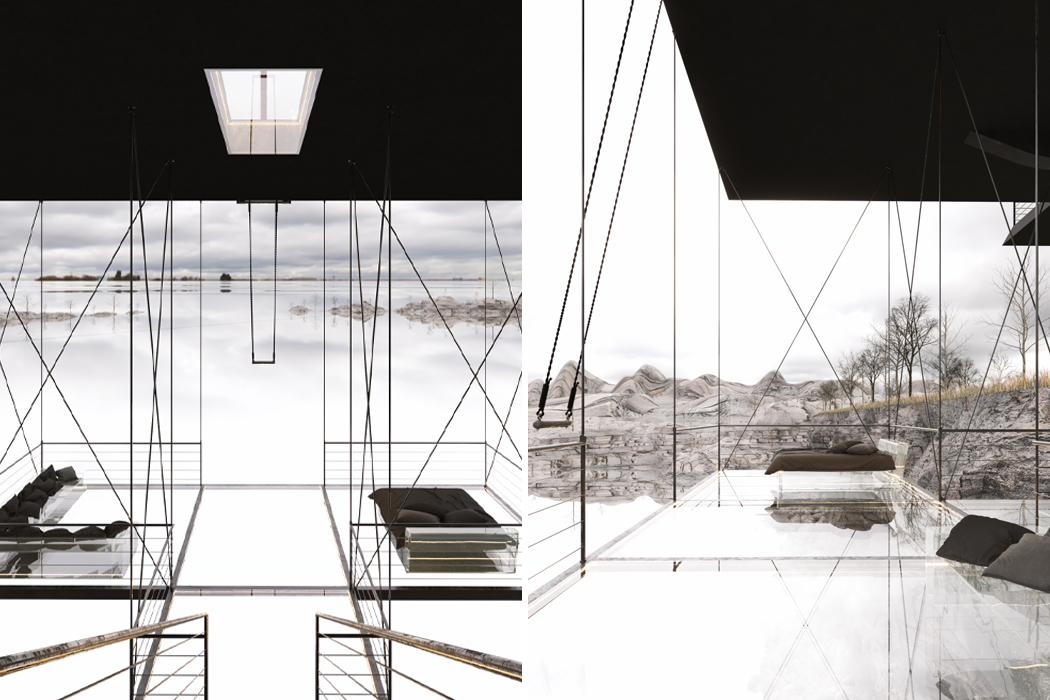 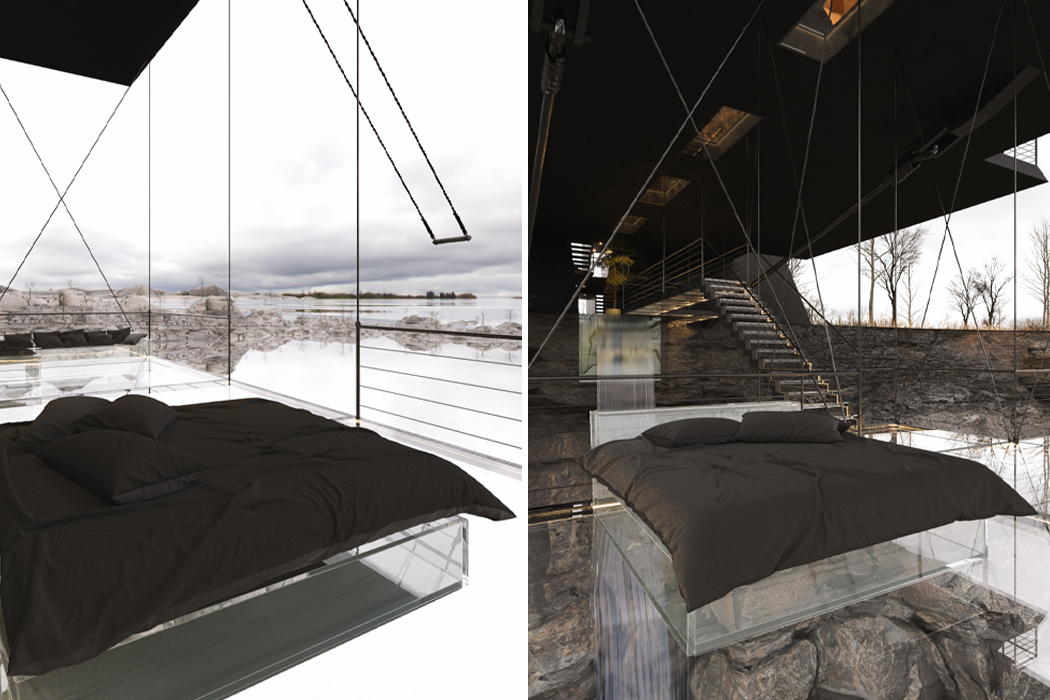 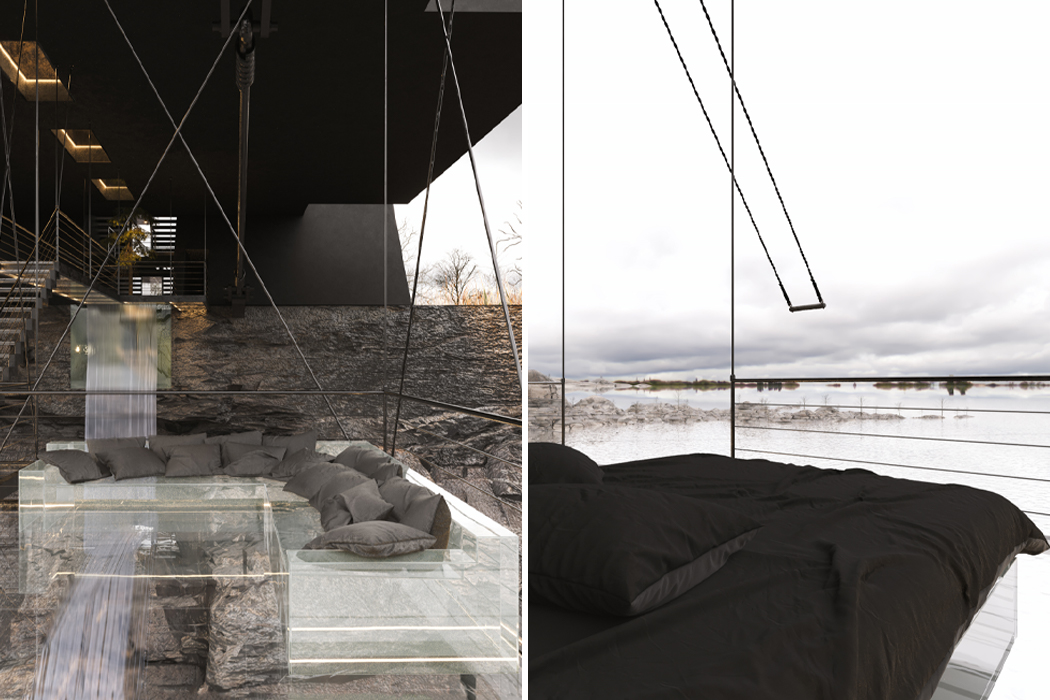 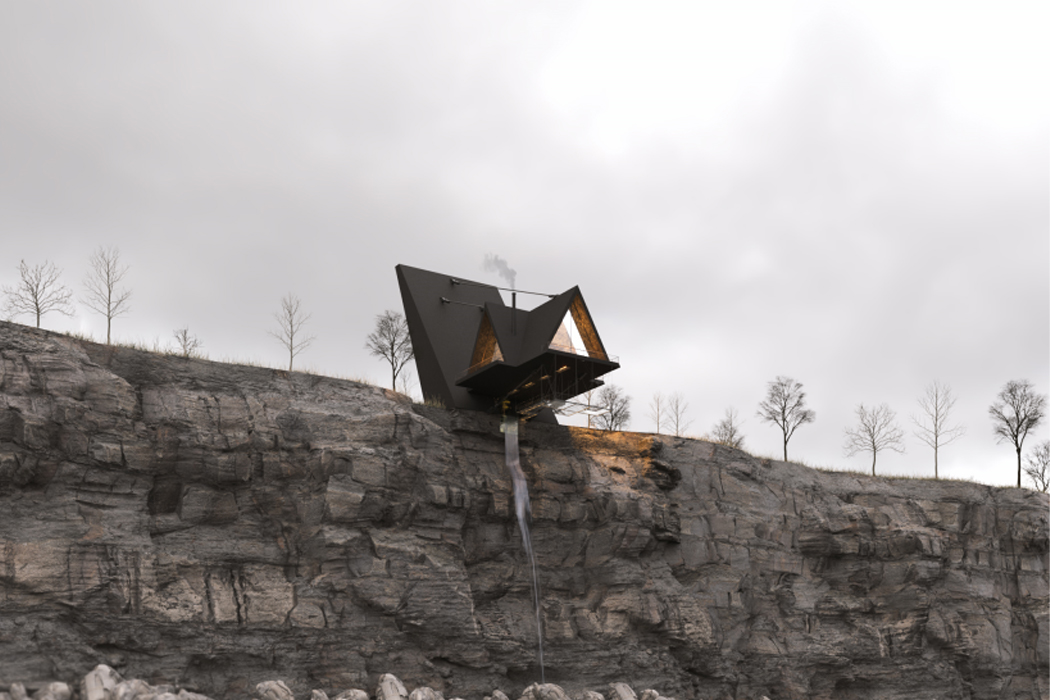 Perched at the top of a cliffside, Suspended House evokes feelings of nostalgia and wanderlust. 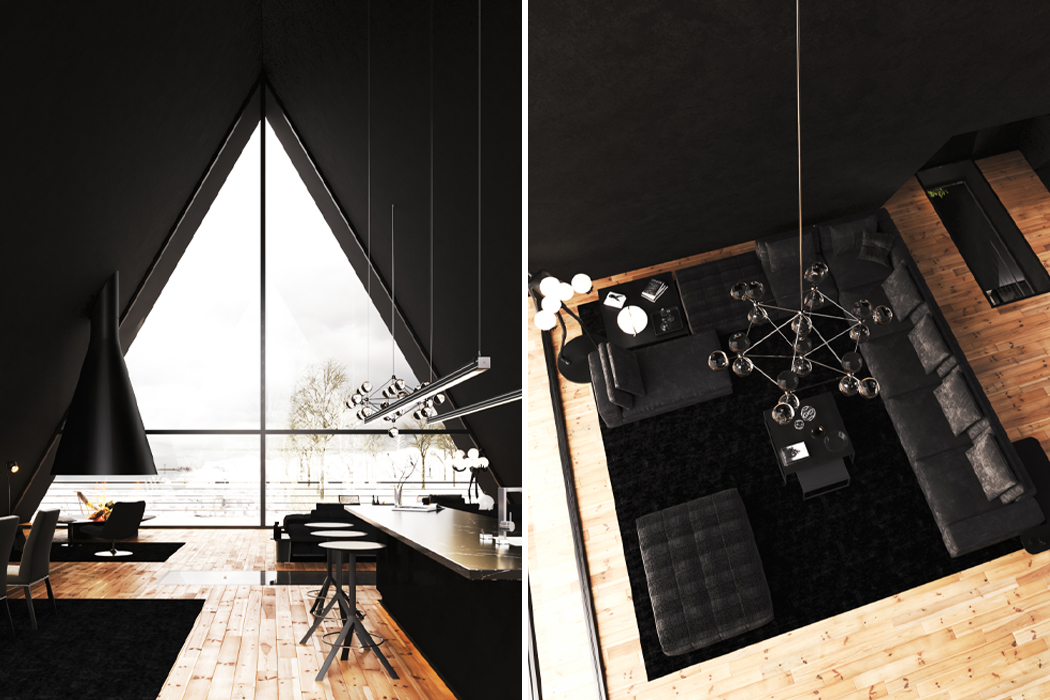 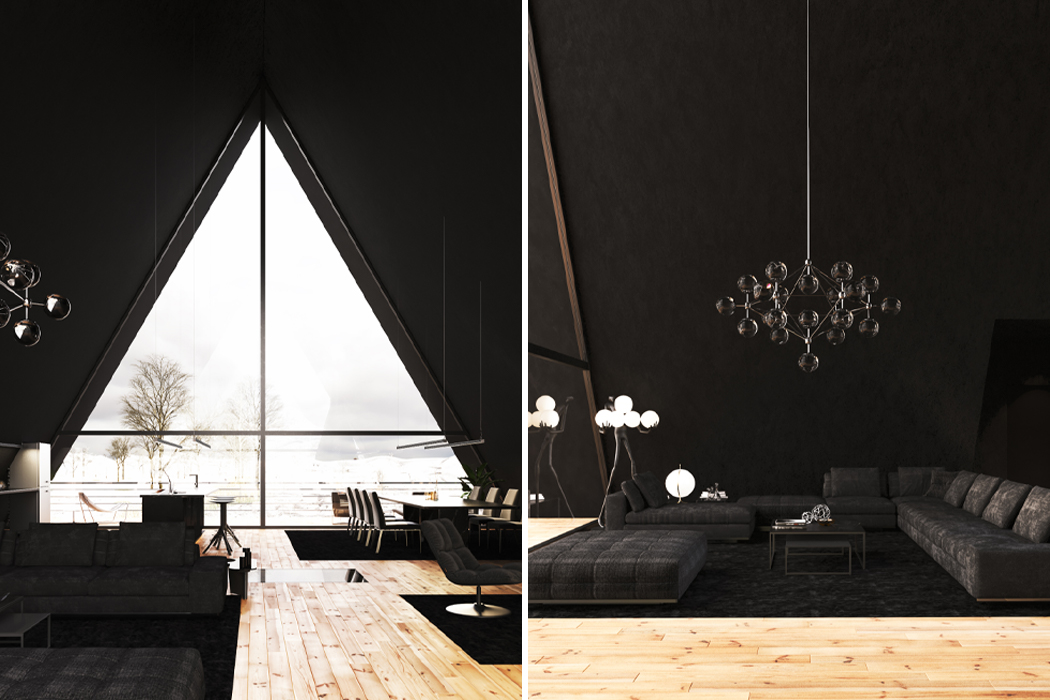 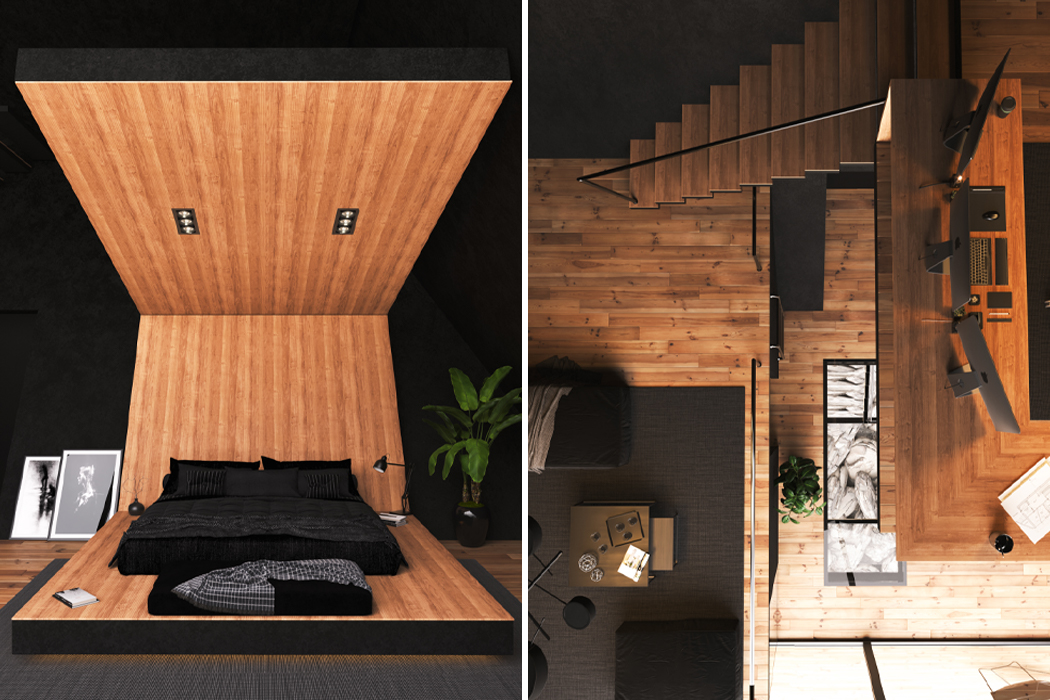 Inside, richly textured wooden accents create a cozy air for Suspended House, offering a place of respite from the more daring sides of the house. 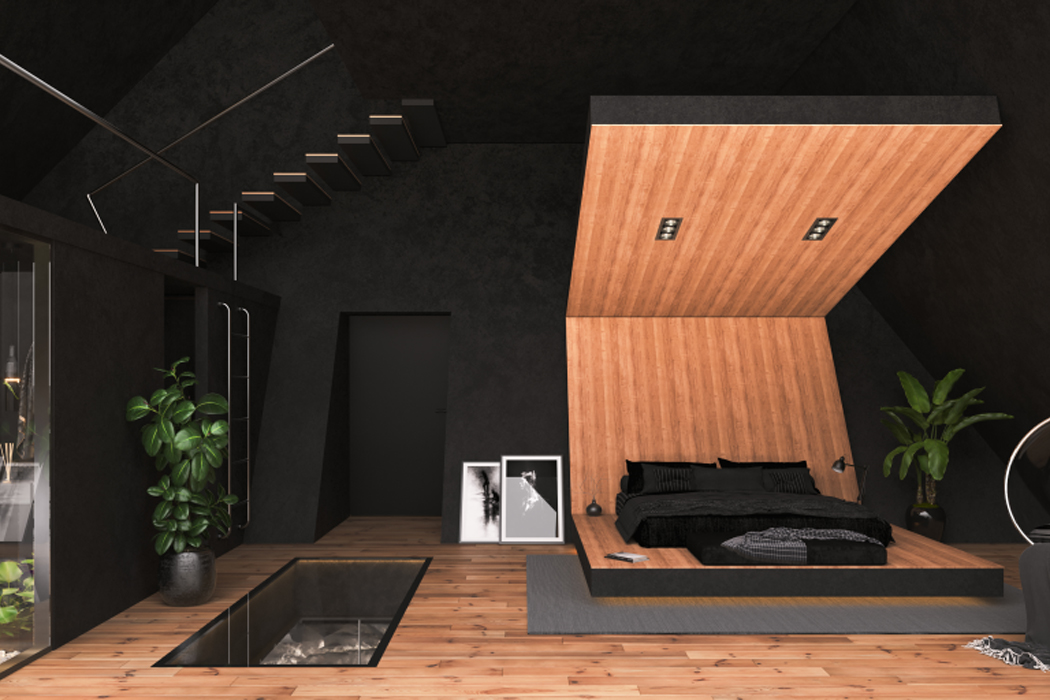 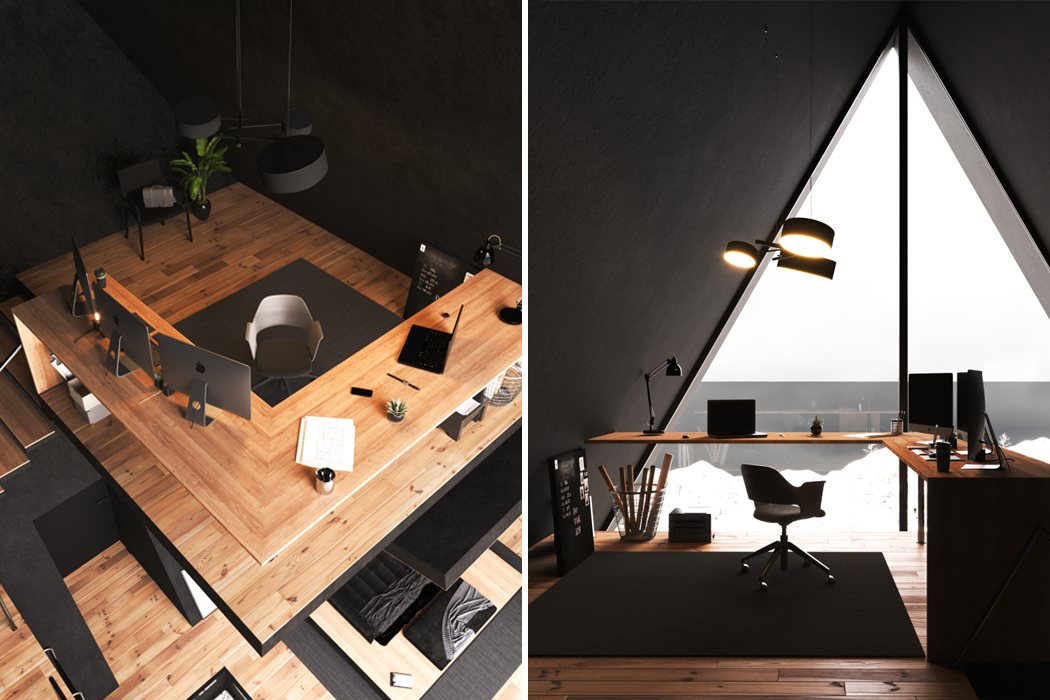 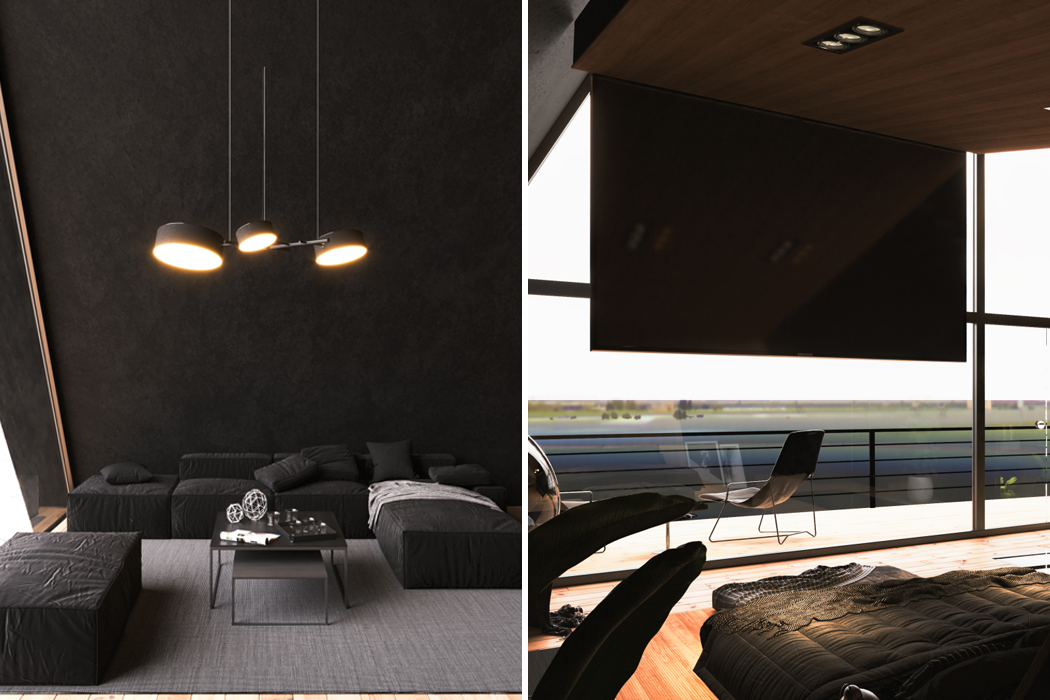 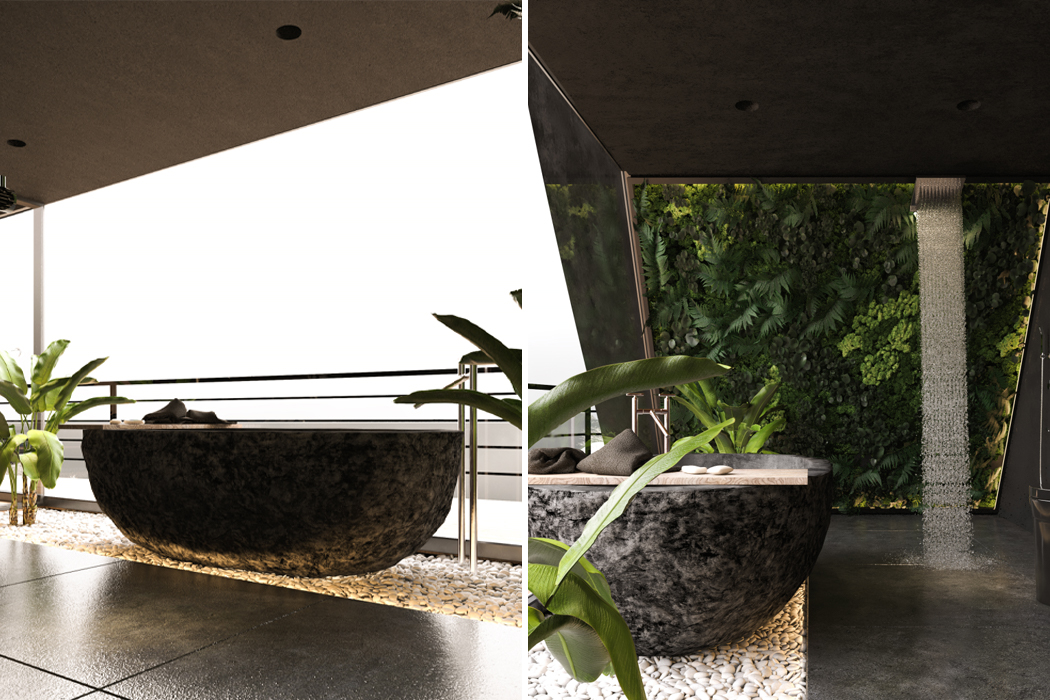 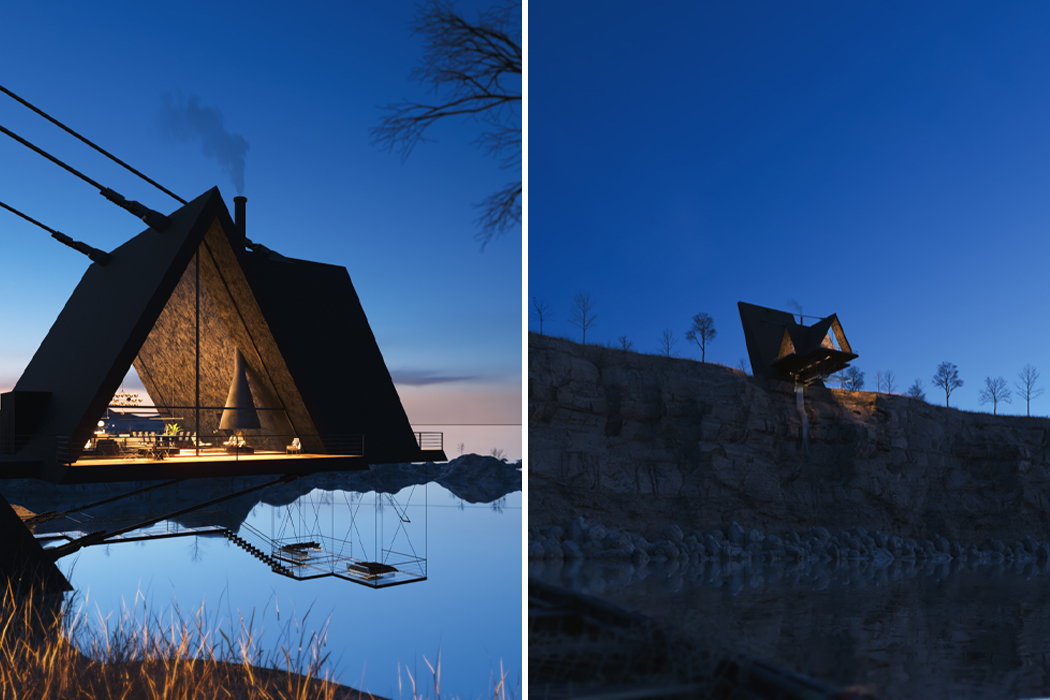 Come dusk, Suspended House emanates warmth from the lantern-like lights throughout the home. 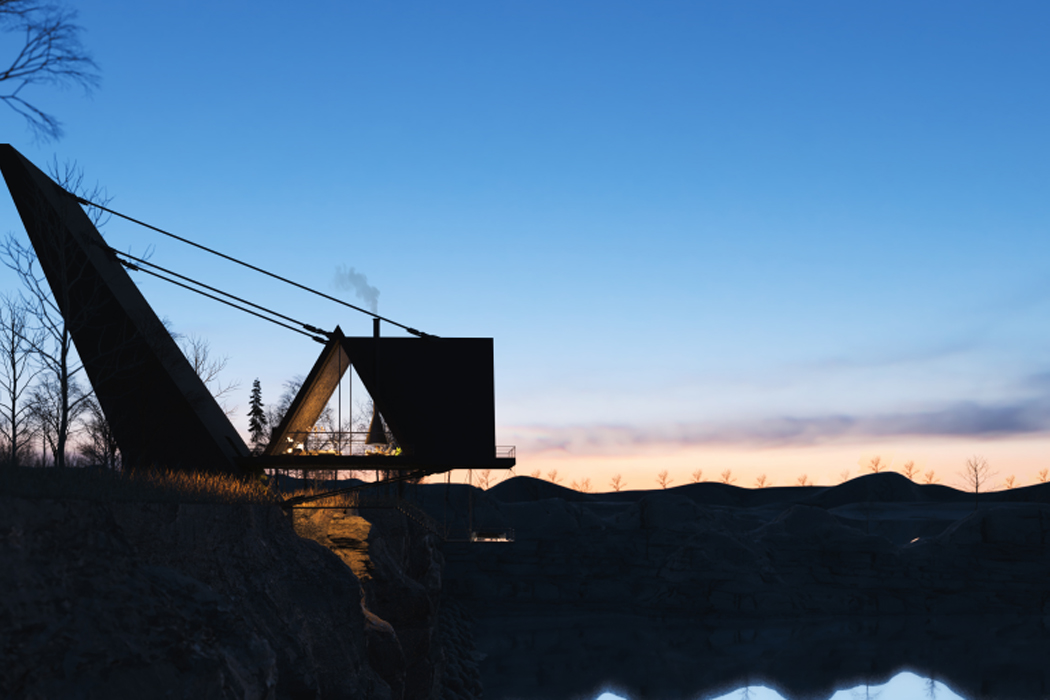 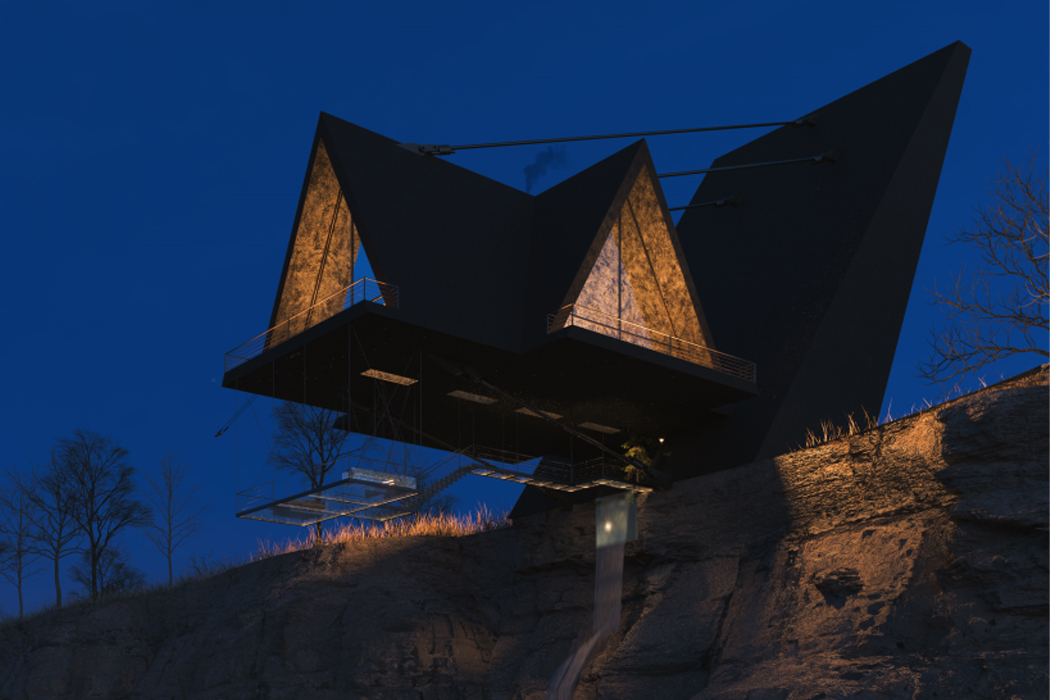 Have you ever walked into someone’s house or office and they have this cool showpiece with a water fountain? I am talking about those mini…

Hang your fruit on the wall. “The Ring” is an unusual fruit bowl made of porcelain. It is not placed on a dining table or…