Think Meccano meets Mad Max. That’s sort of the aesthetic the Woodcraft Marvels are going for. Designed to be DIY yet absolutely awe-inspiring, the Woodcraft Marvels are a series of, let’s call them toys, made from laser-cut wood, among other things. Put the pieces together to create a toy that isn’t really for the faint-hearted. The Marvels come in kits that let you make a monster-truck, a Rapid Trike with a rotating axle that’s reminiscent of the Batmobile, as well as other functional products like a watch-inspired electric pencil-sharpener with actual rotating gear-mechanisms, a desktop replica of the Chernobyl reactor with rotating parts and secret storage compartments, and a bulldozer with literal wooden tread-tires.

The Woodcraft Marvel toys boast of some serious detail, with intricate parts that come together to form some seriously addictive toys. The Mad Max-inspired monster truck comes complete with a toy bull-skull on the front, headlamps, taillights, and even a pair of foglights. The wheels sport some rather rugged treads that make the truck operate on practically any surface, and perhaps my favorite detail is the use of magnetic suspension to give the car the ability to drive brutishly on any terrain without compromise. If you’re looking for less rugged and more sporty, there’s Woodcraft’s Rapid Trike kit that lets you assemble a working RC trike with a rear wheel that rotates on both an X as well as a Y axis. From building the car to controlling it, to even assembling the controller that powers it, Woodcraft Marvel’s kits are exhaustive and incredibly engaging… like building those RC airplane replicas and then spending hours flying them… but entirely made out of laser-cut wood, and with design details that you’ll obsess over, from LED lights to those magnetic shock-absorbers that are an absolute stroke of genius!

Woodcraft Marvel’s more functional toys include an electric pencil sharpener with a watch-inspired gearbox. A sheer pleasure to look at, the sharpener comes with a set of gears that whirr as your pencil gets sharpened in a rather steampunk-fashion. There’s even a replica of the Chernobyl arc reactor that rotates animatedly, and a wind-up bulldozer that’s inspired by the dozers driven by the USSR first-responder task force in the Chernobyl aftermath.

With their raw laser-cut wooden construction, Woodcraft Marvels are much more than toys. They’re art pieces that inspire and engage, as you get the wooden joineries to interlock, paired with electronic parts that truly bring a level of joy that most DIY sets like LEGO tend to lack. From the moment you open the box, to the time you spend assembling the Marvels, to actually playing with them, there’s no end to the amount of enjoyment and sheer learning the Woodcraft Marvel kits can provide… whether you’re a kid or even an adult! 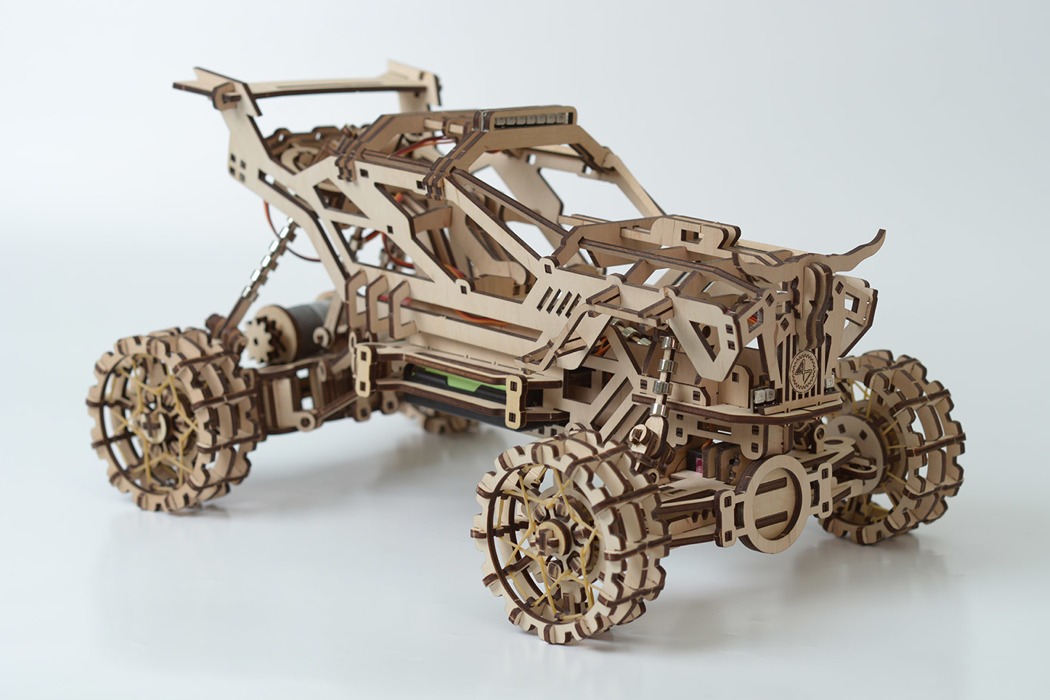 This off-road inspired buggy boasts additional speed and power through a wheel-whirling mechanism. Shock absorbers allow the buggy’s frame to tilt to the side for flexible movement.

Check out the video of the Sandstorm Cruiser.

This plywood DIY model, once assembled, can drift, veer and avoid obstacles (controlled by you)! 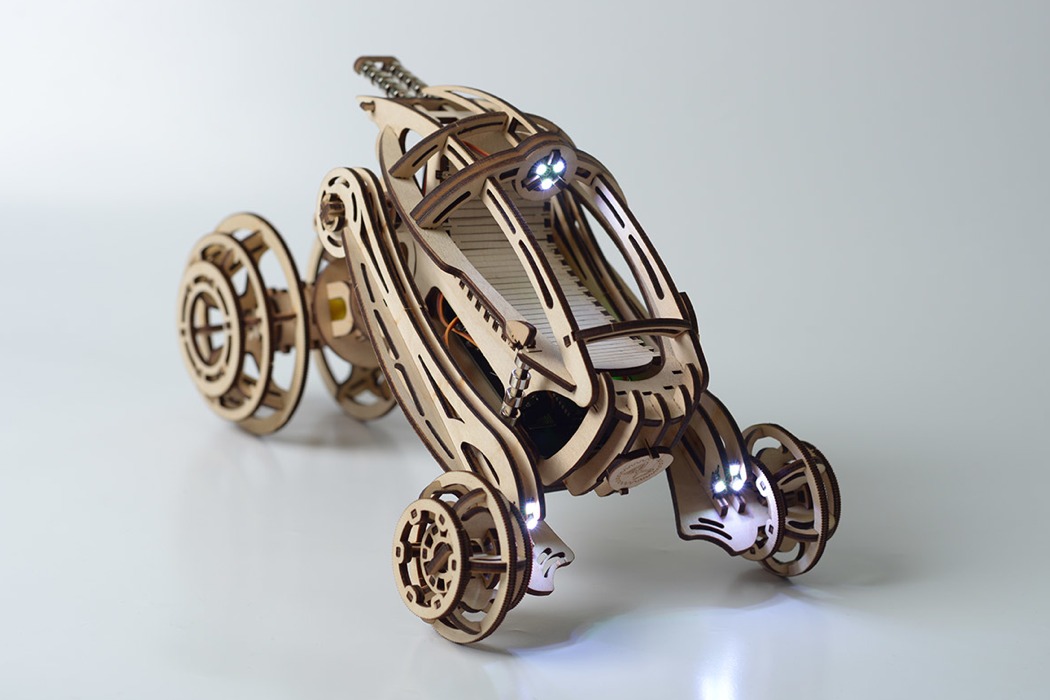 This lightweight trike is built to be agile and versatile. The back wheels rotate on axis, allowing for movement against side-surfaces and obstacles, and their shock-absorbers enable springly movement and action. The triple LED lights guide its way.

The Rapid Trike in action!

Watch the Trike model maneuver around the office, dodging the larger buggy!

Wood and clockwork, this pencil sharpener is the perfect work-desk decoration. Every gear inside rotates and whirls, as you bring your pencils to creative readiness.

A demonstration of the beautiful and mysterious collectible: the Clockwood Sharpener!

The Clockwood Sharpener has an intricate pencil-sharpening mechanism, powered by wooden gears and electronics.

Most of their team originates from Ukraine. This model is about remembering one of the most significant pages of modern Ukrainian history.

This tractor comes as a great stand-alone model or an addition to their Reactor of Memories. The near-realistic design resembles the USSR’s first-responder vehicles. “Chernobyl 1986” is engraved upon the bulldozer blade.

Fun and dynamic video of the Hero Dozer.

Time with a Twist of Orange, Please

Conceived for use by the blind but stylish enough to appeal to a broader market, the Nike Citrus watch’s spiral form stretches to fit any…

How about a cargo trike that can instantly slim down into a trendy city bike? Yes, that’s what this highly practical automotive design is all…

The stress and impact that ICUs can have on the mental health of patients typically result in prolonged hospital stays. Troubling cycles typically ensue as…