A prayer rug is a small and portable carpet that Muslims put on the floor when they perform their prayers. Its main function is to provide a clean and isolated platform for the prayer. With the specific patterns on its surface, it also aims to bring the atmosphere of a mosque to wherever they take it.

As one of the main aims of a~Sajjadah 1426′ was to emphasize the values of the patterns on the prayer rug, lighting those patterns up was considered as the main approach from the very first stages of the concept. There were several technology alternatives to achieve this effect: mini LEDs, fibre optics, EL wire embroidery and EL panel. After the experiments done, the most appropriate one turned out to be the Electro Luminescent Phosphore Printing technology. EL wire embroidery has also been explored during the research part and a~mini glow wire’ was ordered from the UK-based company Surelight Ltd.

‘Sajjadah 1426’ indicates the direction via the data coming from a compass module embedded inside it. The closer to the direction of Mecca it is turned, the brighter the patterns illuminate.

‘Sajjadah 1426’ enriches the praying experience with the illuminated patterns on its surface. The word ‘sajjadah’ is a Persian/Turkish word meaning ‘prayer rug’ and the number ‘1426’ stands for ‘2005’ in Islamic calendar. 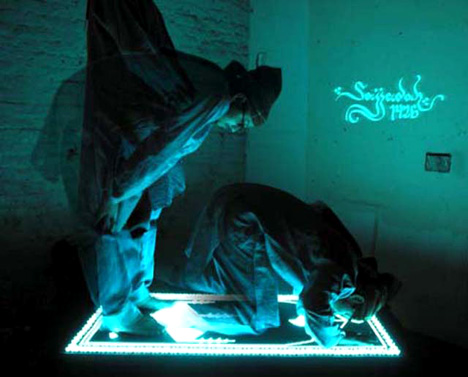 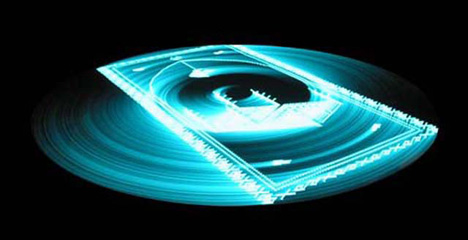 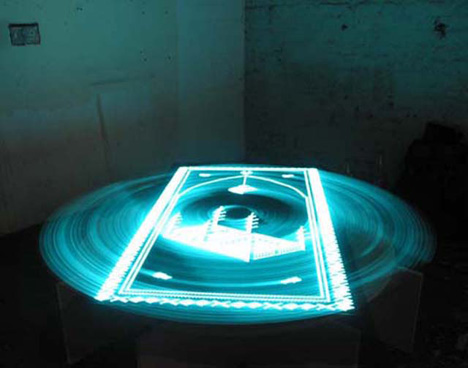 Where was this invention when I was in Fashion Design school? Big Eye Needle is an ordinary loop-eye sewing needle except it’s made of some…

The etch-a-sketch from beyond

Ever heard of Liquid Crystal Paper? No? Well, neither had I but the perks of this job include learning about new things. If e-ink was…

The magnetic levitating spheres of this abstract clock makes time-telling a futuristic experience!

Time is constantly moving forward and also never seems to move quickly enough. The time of day is the first thing we learn when we…