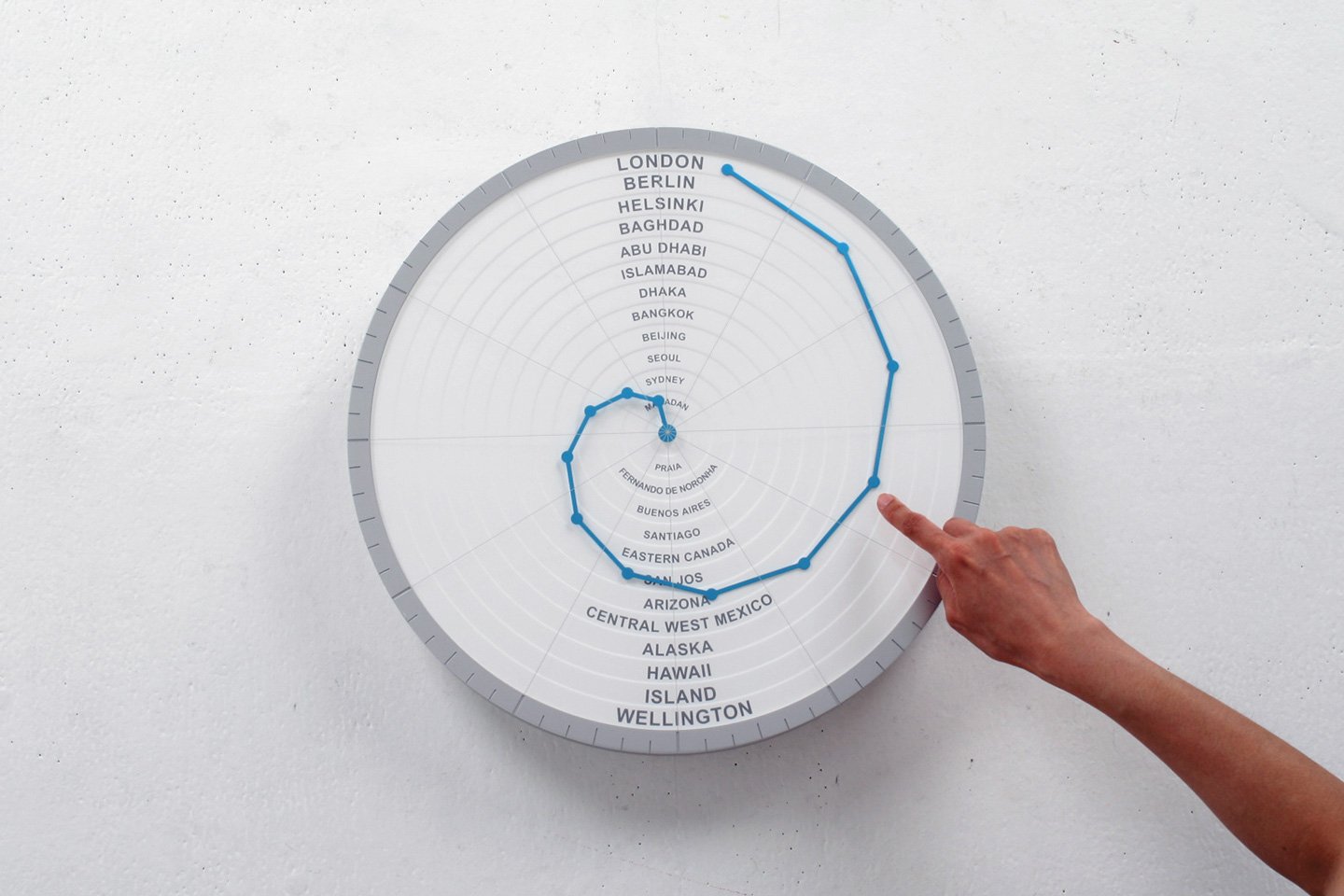 The entire world’s time, on one single dial…

If you really want to see designers be divided over an issue, don’t ask them what they think of the Cybertruck, or whether they’re Mac or Windows lovers, or if they think Comic Sans is a ‘good font’. Just ask them what their thoughts are on the Golden Spiral. Often regarded as either one of nature’s most powerful tools, or an elaborate hoax, the Golden Spiral is often used to justify the greatness of any design. Whether you believe that a spiral can instantly make a product look better designed is a different topic altogether, but you can find the spiral everywhere, from being superimposed on the Parthenon in textbooks, to being used to obscurely show how the Apple Logo is ‘visually perfect’.

The efficacy of the spiral in determining aesthetics may be debatable, however, a designer has figured out a place where the spiral actually works. Designed by UGLY.DUCKLING ID (yes, the name’s pretty ironic), Bent Hands is a world clock that shows the time in every conceivable time zone by just using a single golden spiral that rotates around the face of the clock. I’ll admit, it took me a second to really understand and appreciate how the Bent Hands really works, but after staring at the clock and occasionally googling time zones, it pleases me to say that the Bent Hands clock quite simply works! The clock’s face is split into different time-zone rings, and the rotating golden spiral hand comes with a faceted design that has dots on every vertex. Plot the dot’s location and you’ll get the time in its respective time zone. Clever, no?! 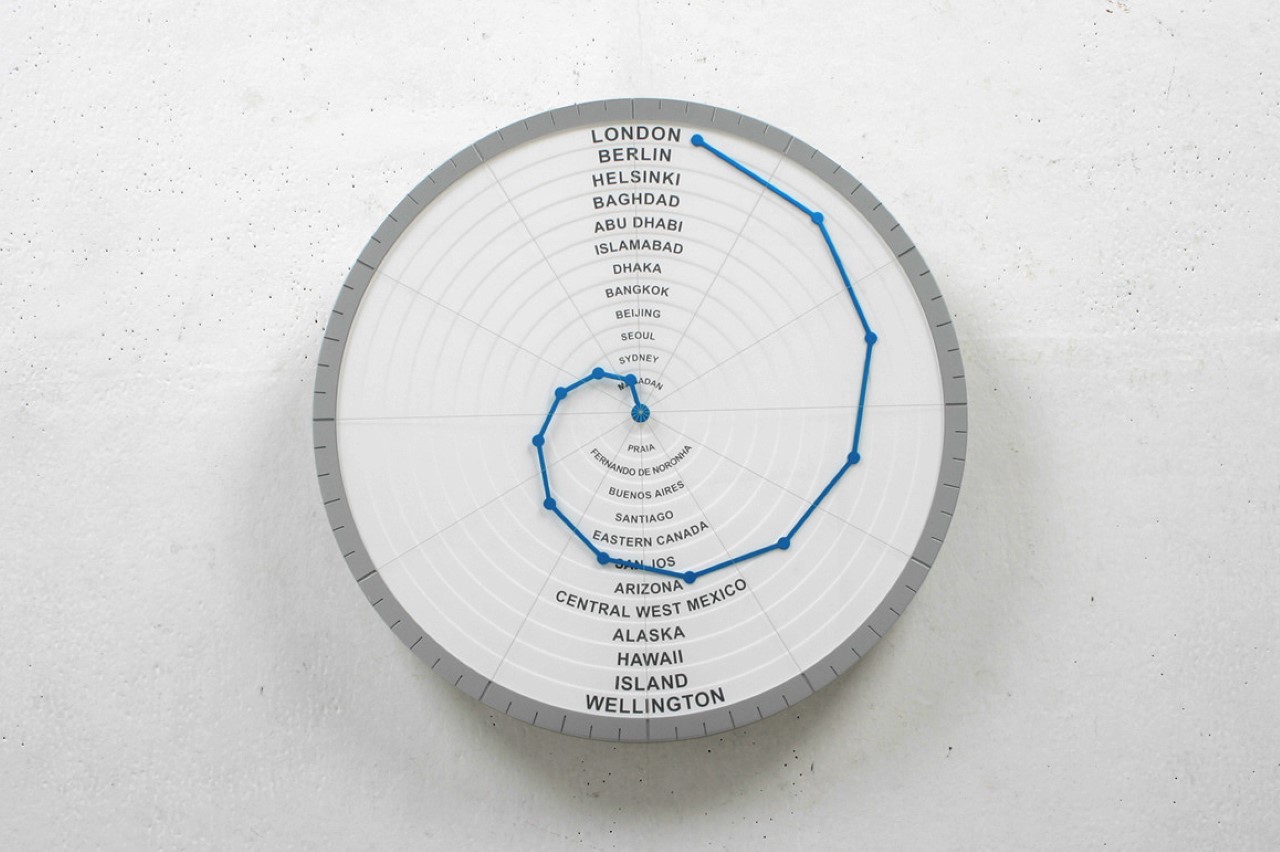 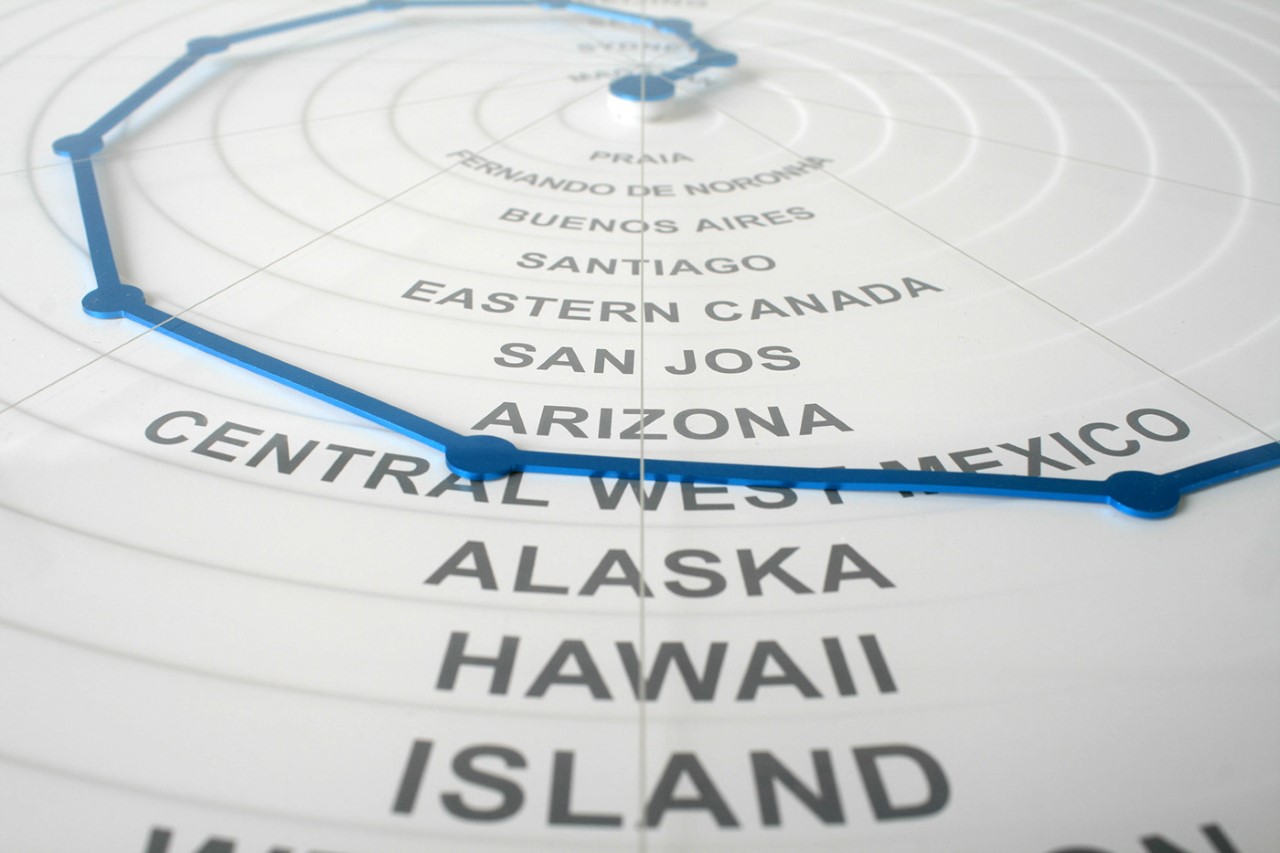 Understanding how the Bent Hands clock works is a little tricky at first, but once you see the image below, you’ll get the hang of it. The different time zones are superimposed over one another to find a common ground. For UGLY.DUCKLING ID, this common ground took the shape of a golden spiral that rotates around the clock, taking 12 hours per round. The way the clock works is simple. The time zones are divided broadly into two categories, covering the AM and PM halves of the world respectively. Each concentric ring on the clock has two time zones written on them, one on the top, and another on the bottom. Simply put, every individual ring shows two times – the AM and PM halves respectively. For example, Helsinki and Hawaii share the same concentric ring on the clock, which means if it’s midnight in Helsinki, it’s noon in Hawaii.

However, there’s one major caveat to how this clock works, and I’m sure you’ve guessed it by now – Daylight Saving. Given that certain countries in the world shift their clocks back and forth by one hour all year, it instantly makes the Bent Hands clock unreliable in a way that is just a natural design flaw that can’t really be fixed. With normal clocks, you’d just set them back or forward, but given the interconnected nature of the Bent Hands world clock, a small change results in inaccuracies all across the board. However, it’s still an incredibly interesting concept, to begin with… and the day the entire world decides to unanimously reject daylight saving, the Bent Hands clock will make for a nice addition to most airports, hotels, and offices! 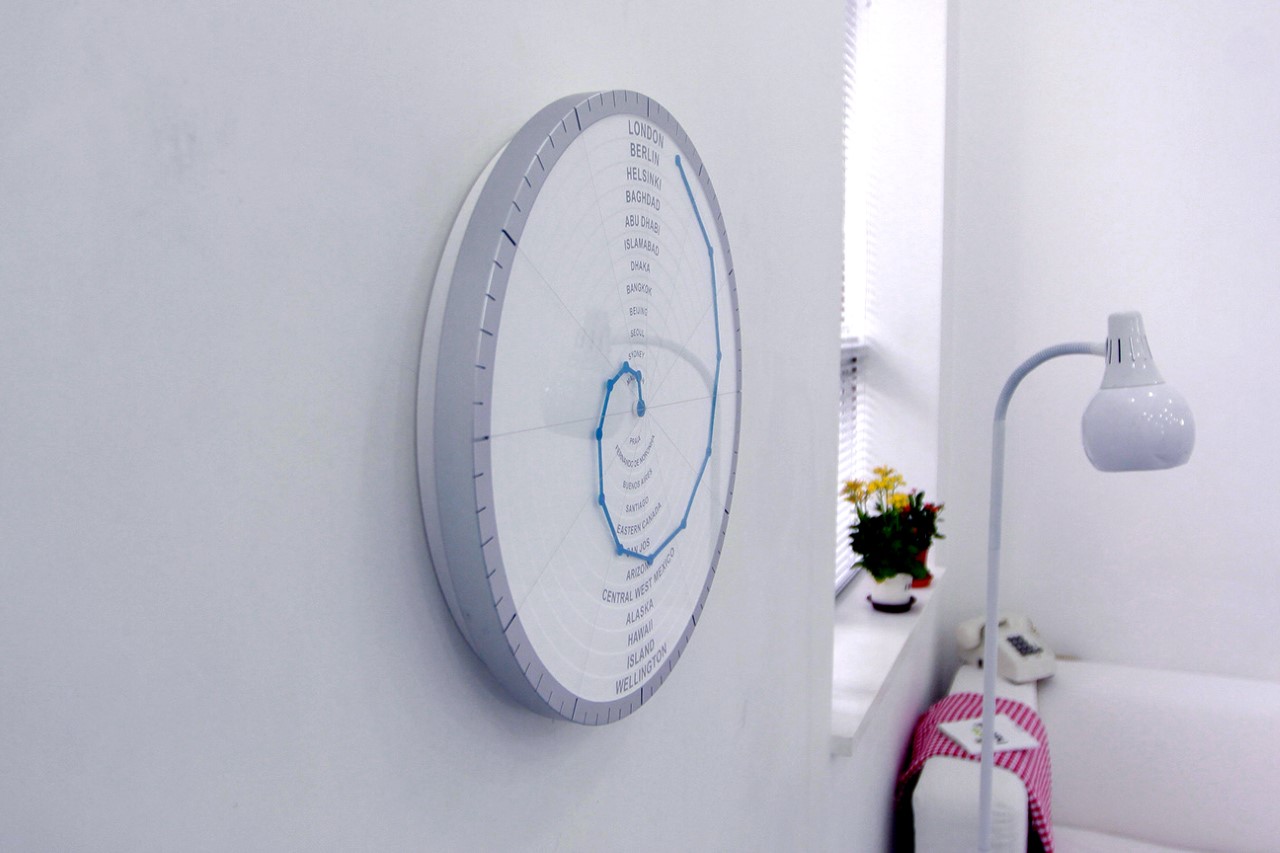 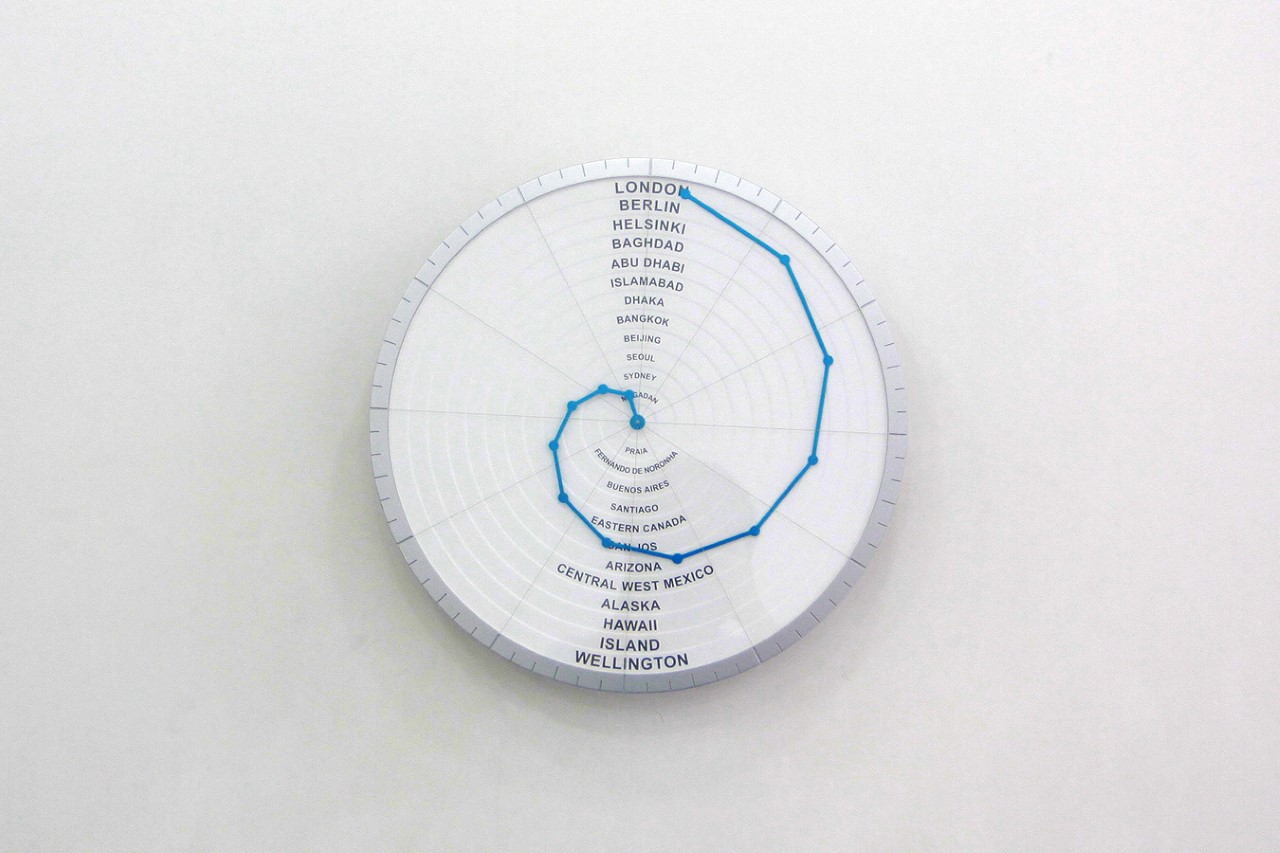 Chemistry Lab Equipments On The Table

A look at these bottles and you go…OMG am I in the chemistry lab again? No you’re not, but you may as well re-visit the…

Move over Roomba! Limbo Robot is sort of like your own personal Mars-rover… only instead of being plutonium powered, it actually harnesses the energy of…

The force is strong with this lamp!

The Monk Lamp has an cool backstory. Look at it carefully and try and think of an organization/faith from a cult movie series. Too much…

A Table to Sit In

The designers at UNStudio, those folks who design football stadiums, have released this lovely weird new table. It’s got a place to sit, right inside…