With a body that’s about as small as a Game Boy, the TX-6 inputs as many as 6 audio channels, letting you expertly manage your audio without needing one of those massive, clunky studio mixing rigs. It also comes with Teenage Engineering’s classic ‘industrial-pop’ design language.

When Teenage Engineering isn’t partnering with IKEA to design speaker systems, Nothing to design TWS earbuds, and Panicto design handheld gaming consoles, they get enough time to themselves to design their own hardware. The TX-6 is yet another handheld little affair from the Swedish company, following their Pocket Operators – a set of minimally designed handheld audio interfaces and synths. The TX-6 feels like a more fleshed-out product though, designed for musicians, deejays, and podcasters. The tiny handheld mixer runs on a battery, and lets you manage up to 6 audio sources while also toggling effects between them. In the right hands, the TX-6 has the potential to be an absolute beast, scaling down an entire studio to something that fits in the palm of your hand. 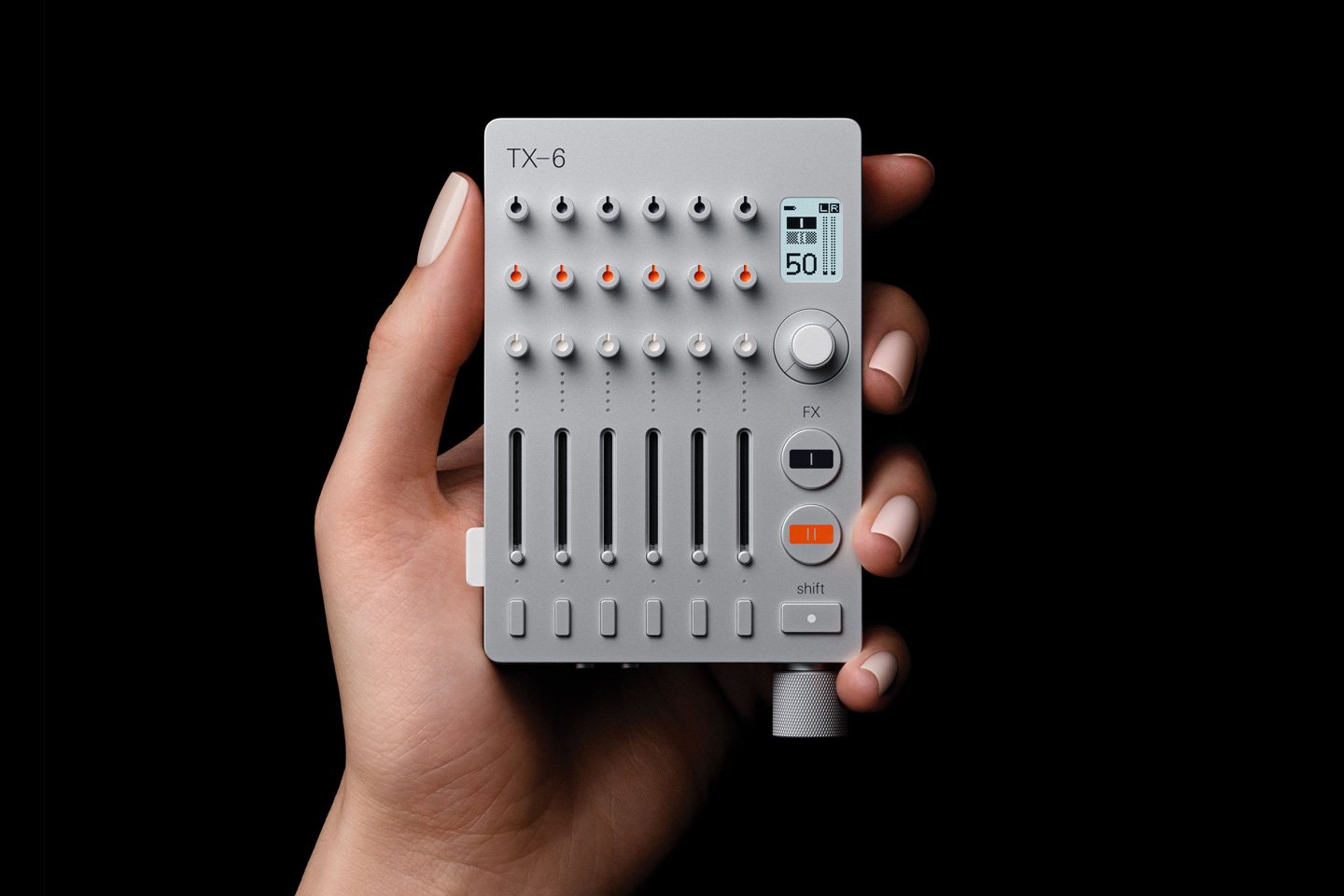 The device has a breathtakingly minimalist appeal, with a machined aluminum body that feels wonderfully well-built and cold to the touch, and a PU leather base that prevents your TX-6 from sliding around while you mix away. Overall, it weighs a mere 160 grams (or 5.6 ounces) and has an abundance of 3.5mm audio ports, for inputs, outputs, monitoring, etc. Each of the 6 channels has 3 parameter knobs, a volume fader, an LED level meter, and a track button, while along the side, the TX-6 also manages to fit a tiny LED display, a toggle+selection knob, two effect buttons, and a shift button. You can hook the TX-6 to an external speaker or a pair of headphones for monitoring, and there’s a 1/4-inch master-out port at the base that also comes with its own 3.5mm audio adapter. Finally, a USB-C port on the top lets you hook the TX-6 to a laptop/tablet/smartphone for mutli-channel audio, MIDI control, and for installing firmware updates. The USB-C port also lets you charge the TX-6, which runs for 8 hours on a full charge – long enough for even the longest podcast episodes! 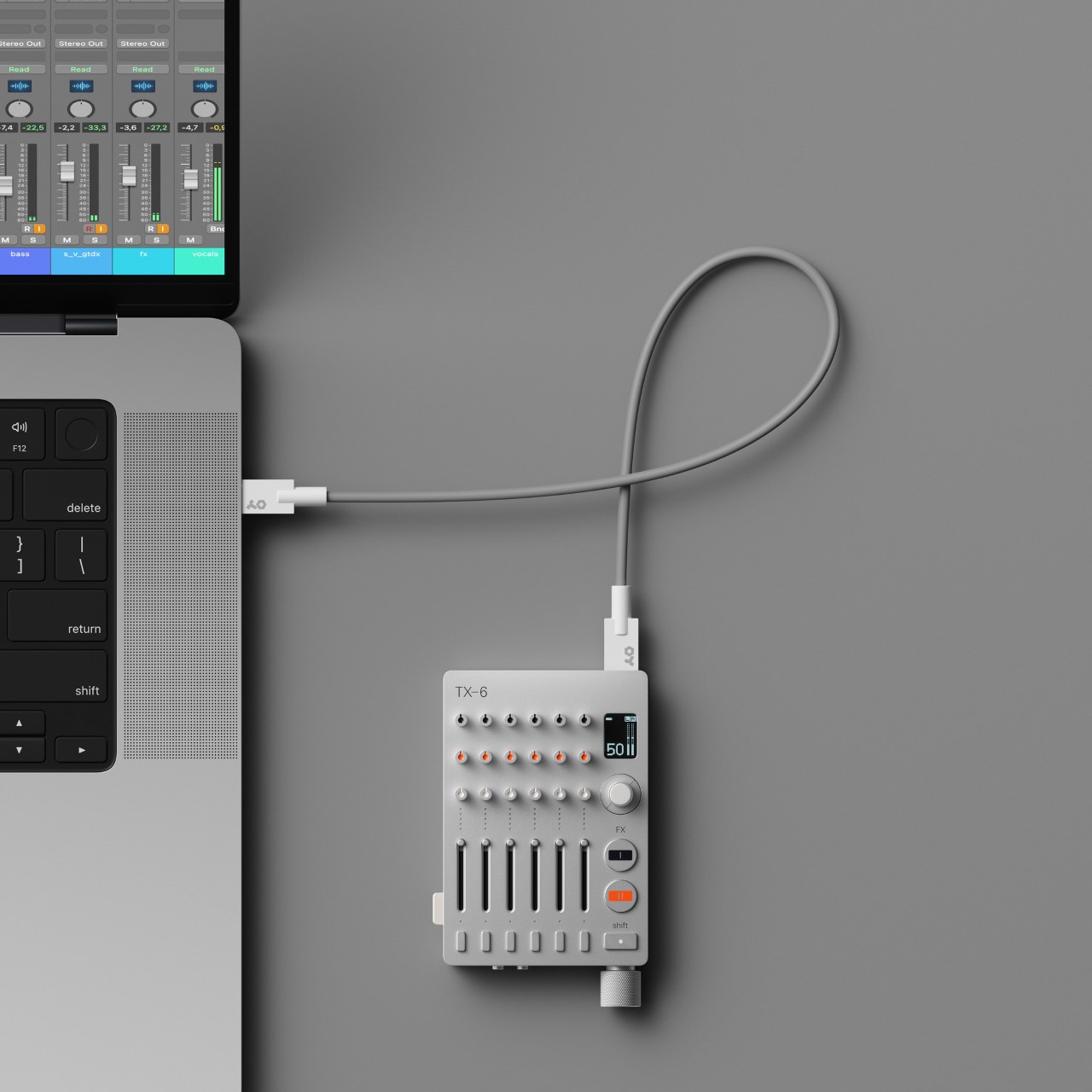 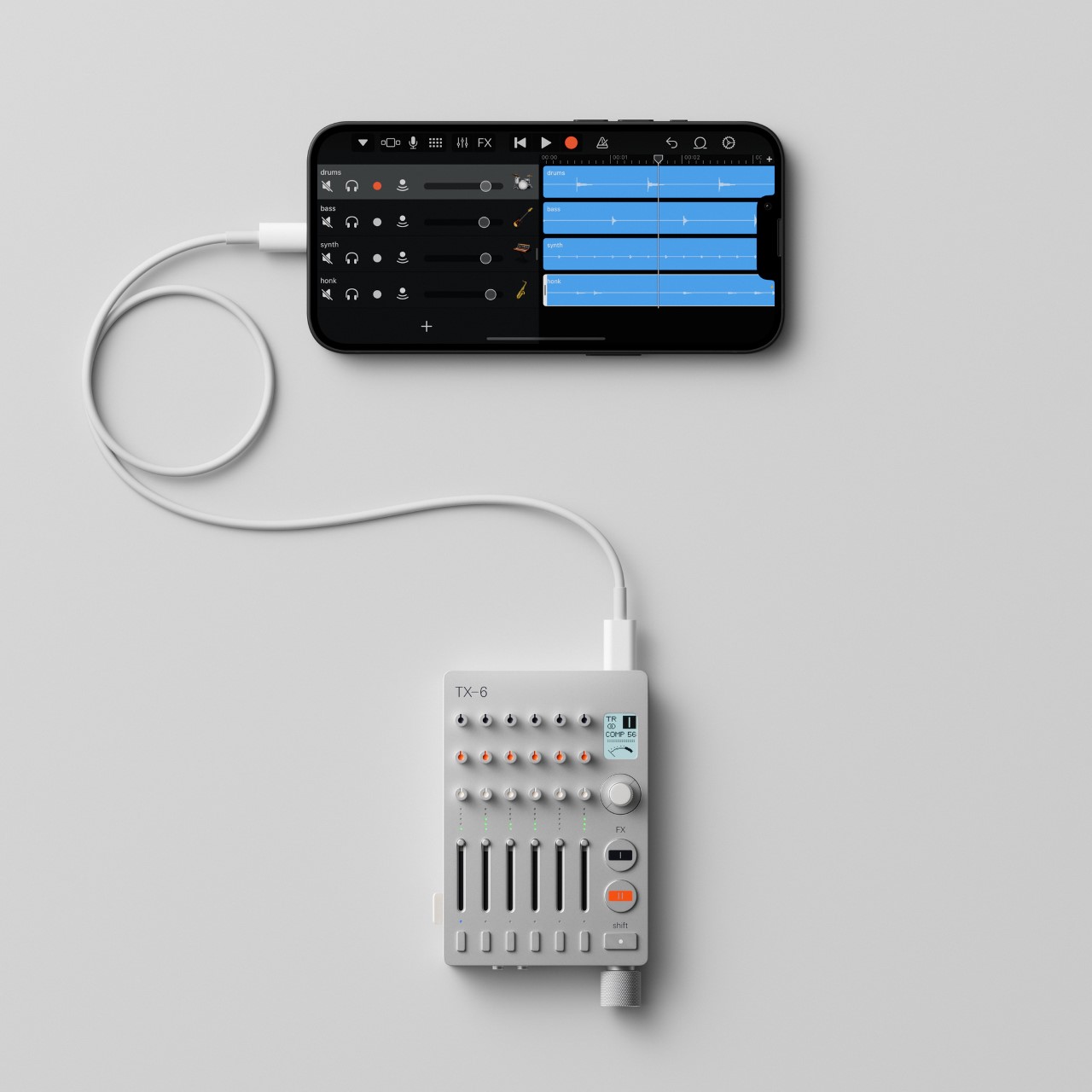 If all that wasn’t impressive enough, the TX-6 also borrows from its Pocket Operator ancestors, by packing a portable synth with 4  oscillator waveforms and 4 synthesized drum sounds built-in, along with 8 effects that include reverb, chorus + delay, freeze, tape, filter, and distortion. Each of the 6 channels also packs a three-band eq and adjustable compressor. Tired of dealing with too many peripherals and wires? The TX-6 is even equipped with Bluetooth connectivity, letting you wirelessly manage your audio (although it feels like there’s bound to be a tiny bit of input lag on a wireless connection) 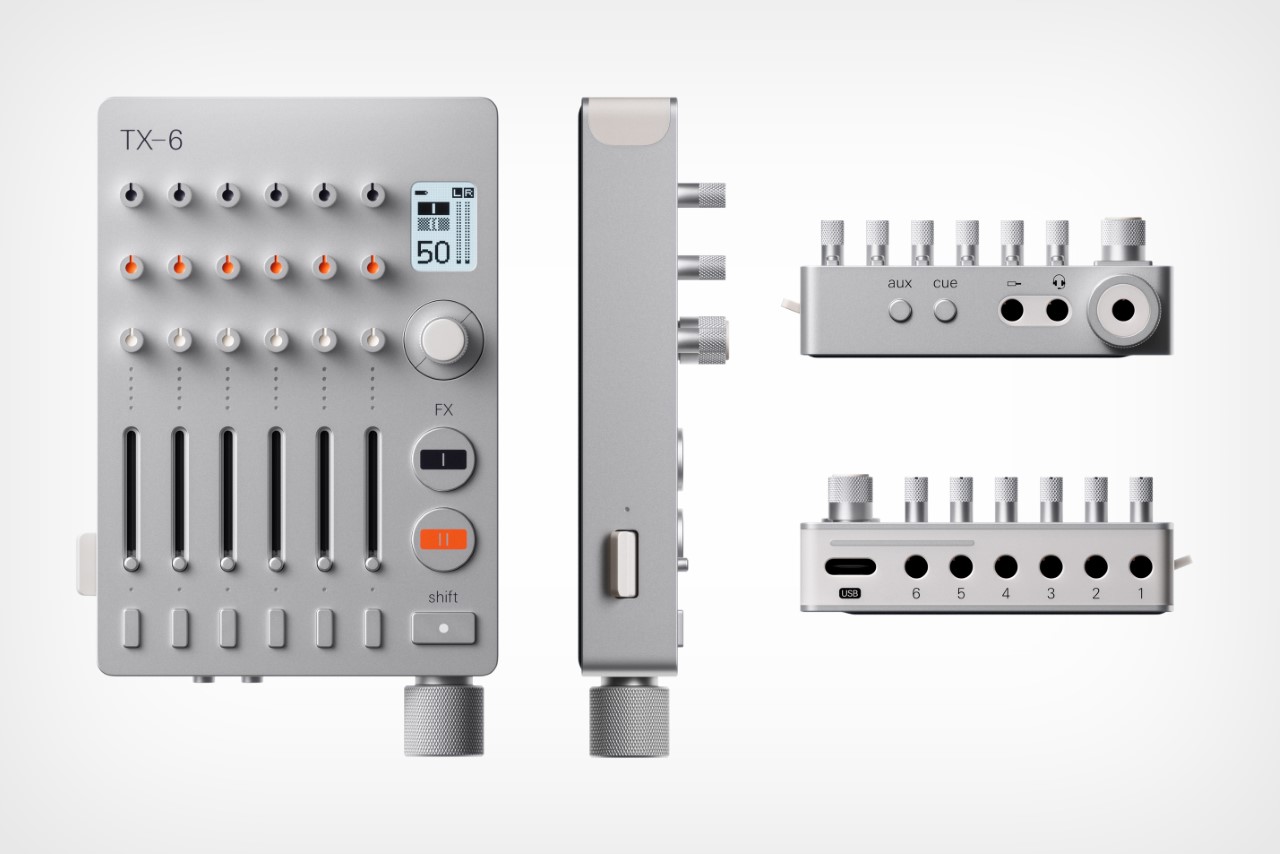 All that power doesn’t come cheap. The TX-6 is priced at a rather conservative $1200 for the handheld mixer, along with the adapter, a USB-C cable, and a cloth bag to carry the entire thing around. While that sounds like much for the average joe, it probably makes more sense to a seasoned music producer or podcaster who’s looking to own pro tools that are portable enough to use in hotel rooms and on airplanes. 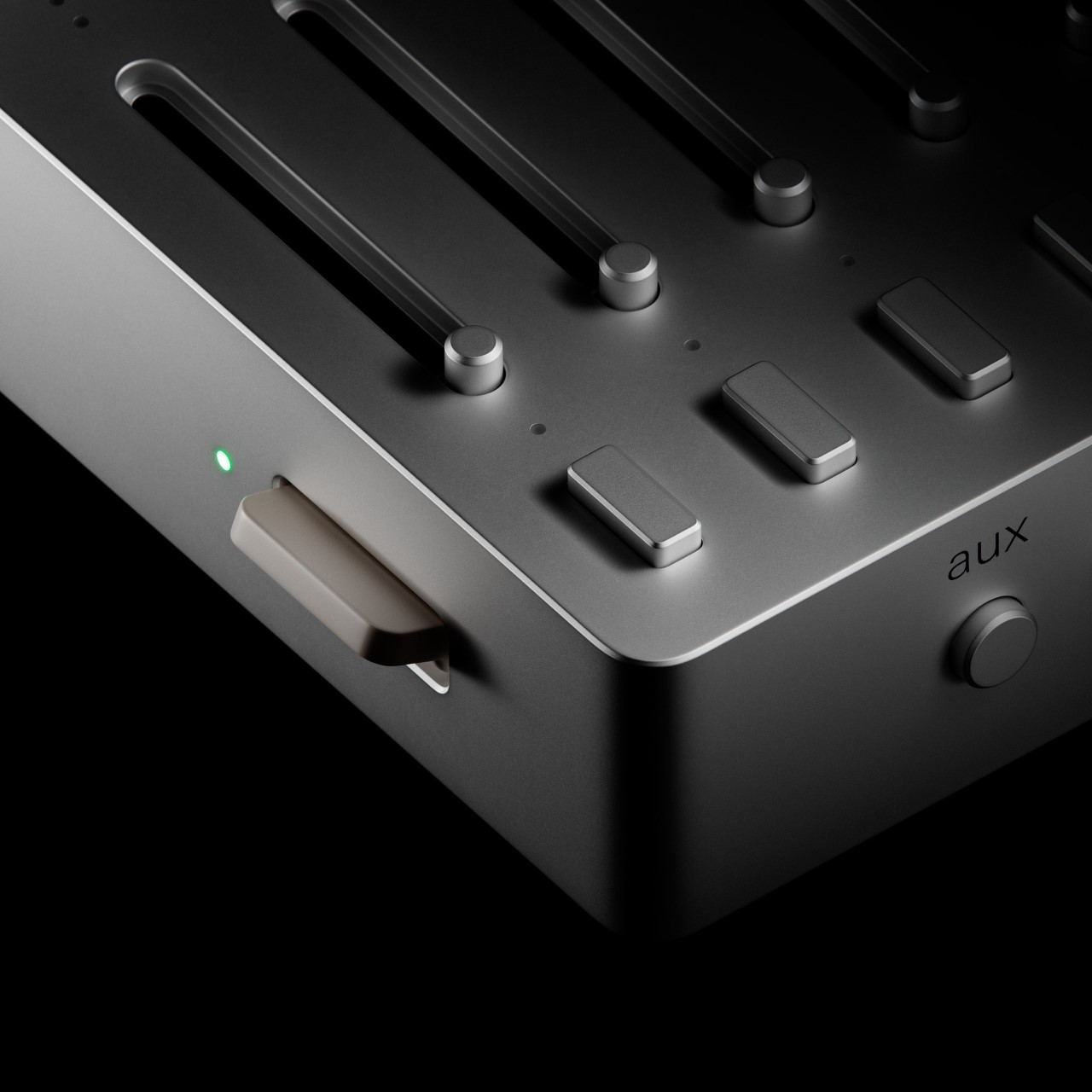 Here’s how to clean your AirPods, earphones, and hearing aids safely without damaging them

No, it doesn’t require Apple’s $20 cleaning cloth or any special skills. Instagram and TikTok will have you believe that cleaning AirPods requires 3 different…

This Dieter Rams-inspired turntable is spearheading the transparent design trend!

We love a cool vinyl turntable, and Gearbox’s Automatic Turntable MkII is as cool as it gets! Inspired by Dieter Rams’ 1955 Braun PC 3…

Available in your choice of a fabulous aluminum and brushed metal or GUNMETAL. Yes, you too can sit on sound. It’s the “Sound Lounge” from…

I defy you to find a better place to rest your headphones than on the heads of Iron Man or Loki, or even Thanos. If,…