This might just be the one charger to rule them all… 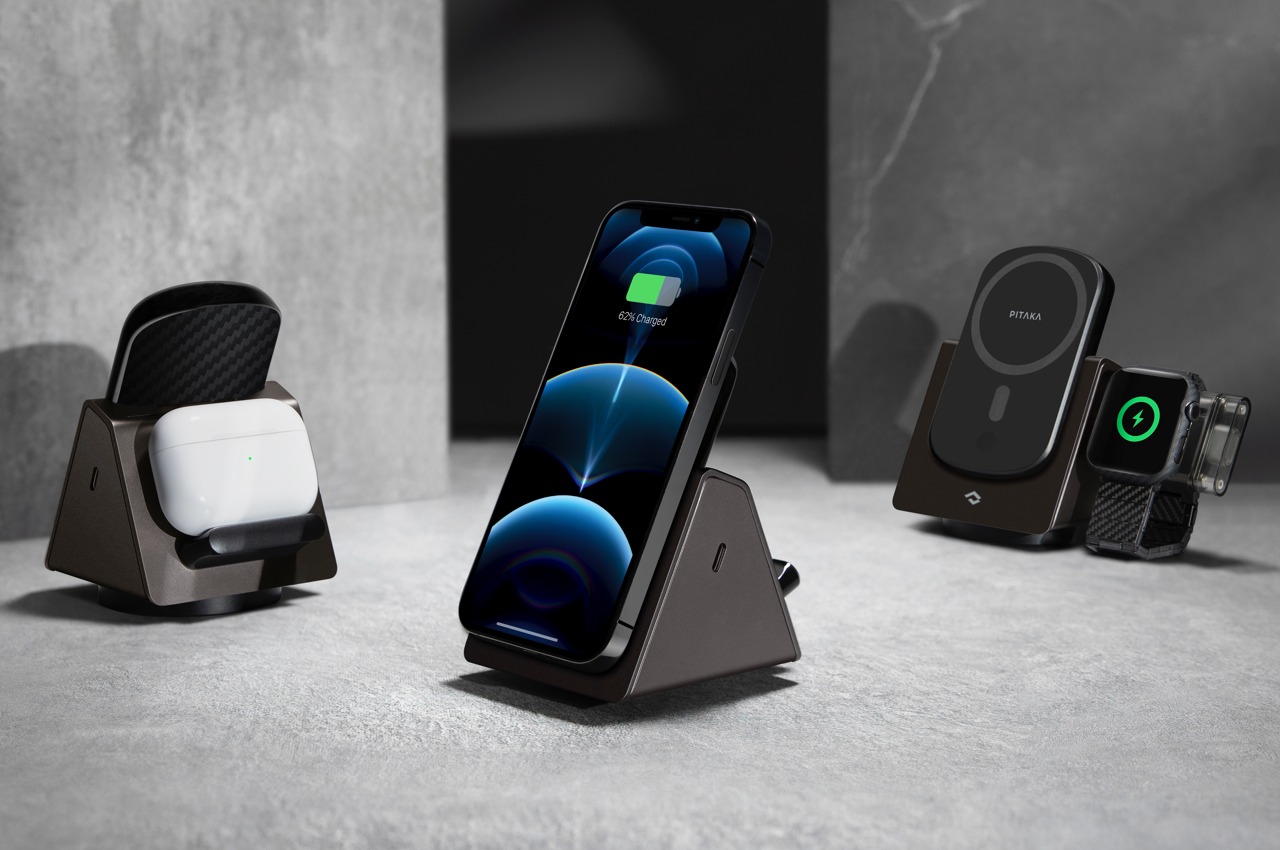 Charge all your Apple essentials, including your iPhone, AirPods, and Apple Watch.

Over the course of its existence, PITAKA’s worked to fundamentally make Apple’s products better by designing highly functional charging accessories for them. The MagEZ Slider, however, feels like a culmination of all that work. A wireless charger designed to work with your phone, watch, and TWS earbuds, the MagEZ Slider is compact little number that’s perfectly sized to sit on any tabletop surface while simultaneously ensuring that your workspace isn’t cluttered with different wires and dongles. 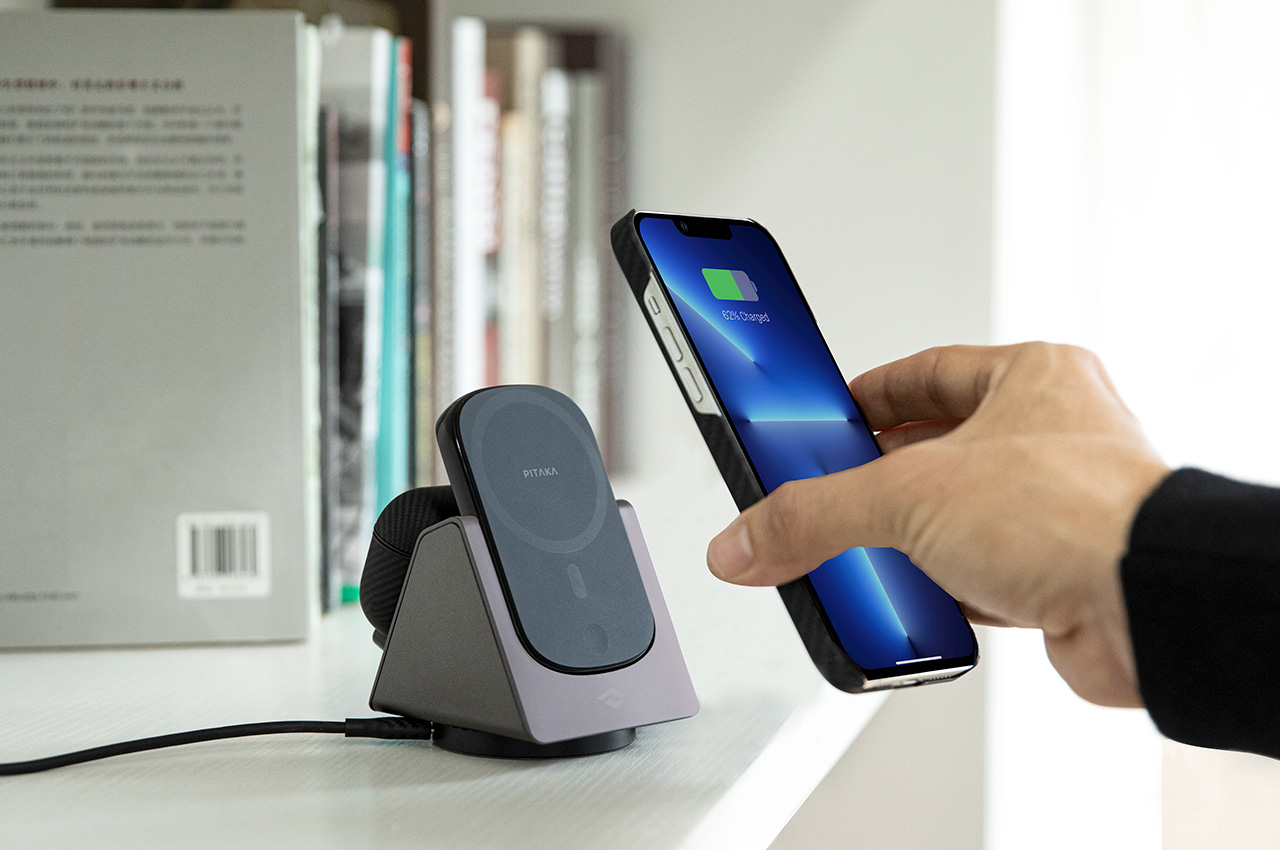 The MagEZ Slider builds on one of PITAKA’s previous products, the MagEZ Juice. The MagEZ Juice was a portable wireless charging power bank that came with its own dock/stand, allowing you to practically charge your phone anywhere. Now in its evolved form, the MagEZ Slider comes with a few new tricks up its sleeve. Sure, it has a MagSafe power bank and a docking stand for your iPhone, but now it even features a wireless charging zone for your AirPods. The rear surface of the MagEZ Slider lets you easily pop in a magnetic tray to rest your AirPods on, effectively charging them. The reason the tray isn’t baked right into the product is so as to ensure the entire MagEZ Slider has a compact profile that adapts to your needs. 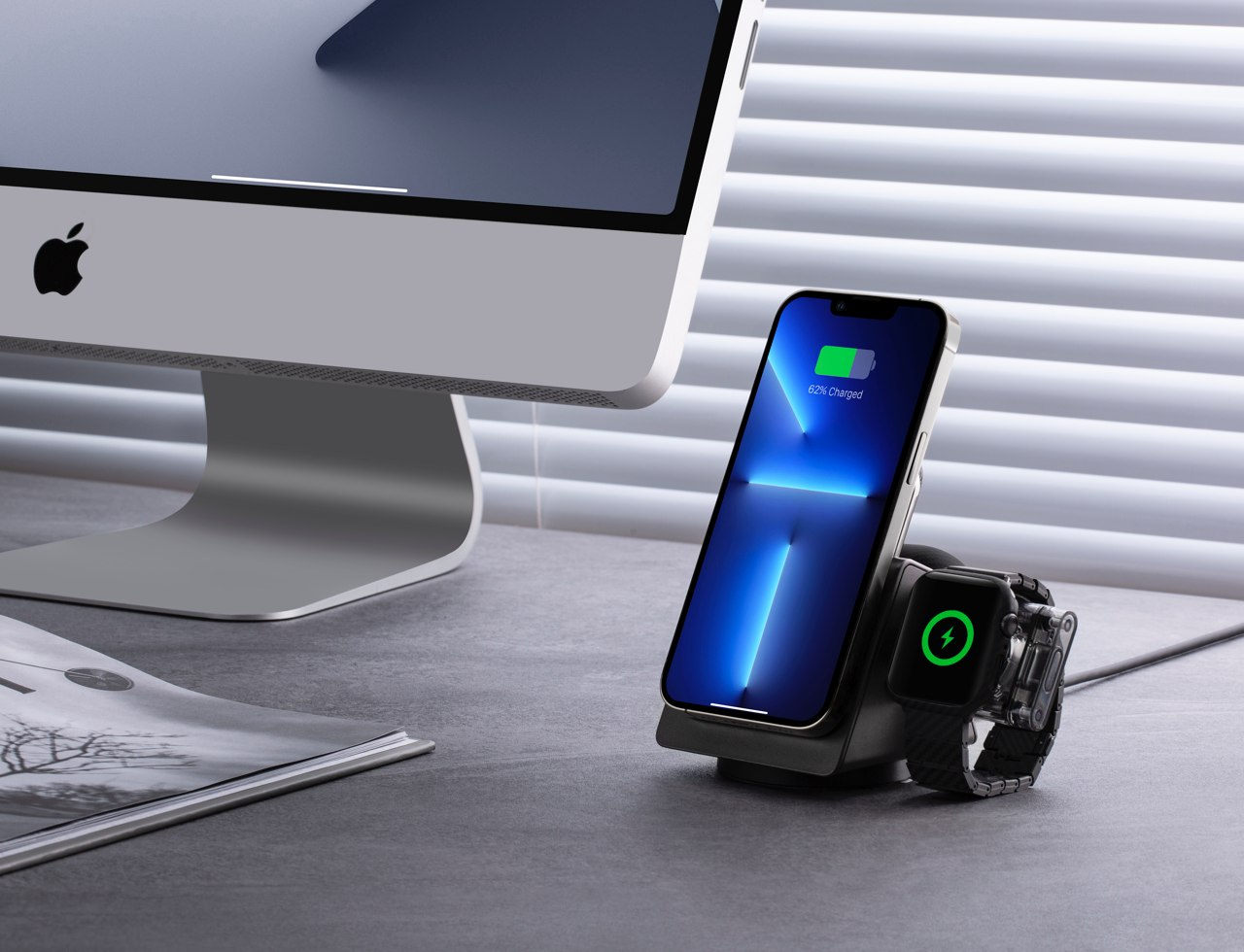 Plugin and charge your Apple Watch using the Power Dongle.

The Slider also comes outfitted with a rotating turntable on its base. Designed to let you adjust your gadgets to face you wherever you are without fiddling with the apparatus (and potentially knocking your phone or other gadgets over, the MagEZ Slider’s rotating turntable base swivels a full 360°. Contrary to what you’d think, the Slide doesn’t get its name from this unique feature. It is, in fact, the sliding MagSafe power bank that gives the MagEZ Slide its name, and also its key user interaction. 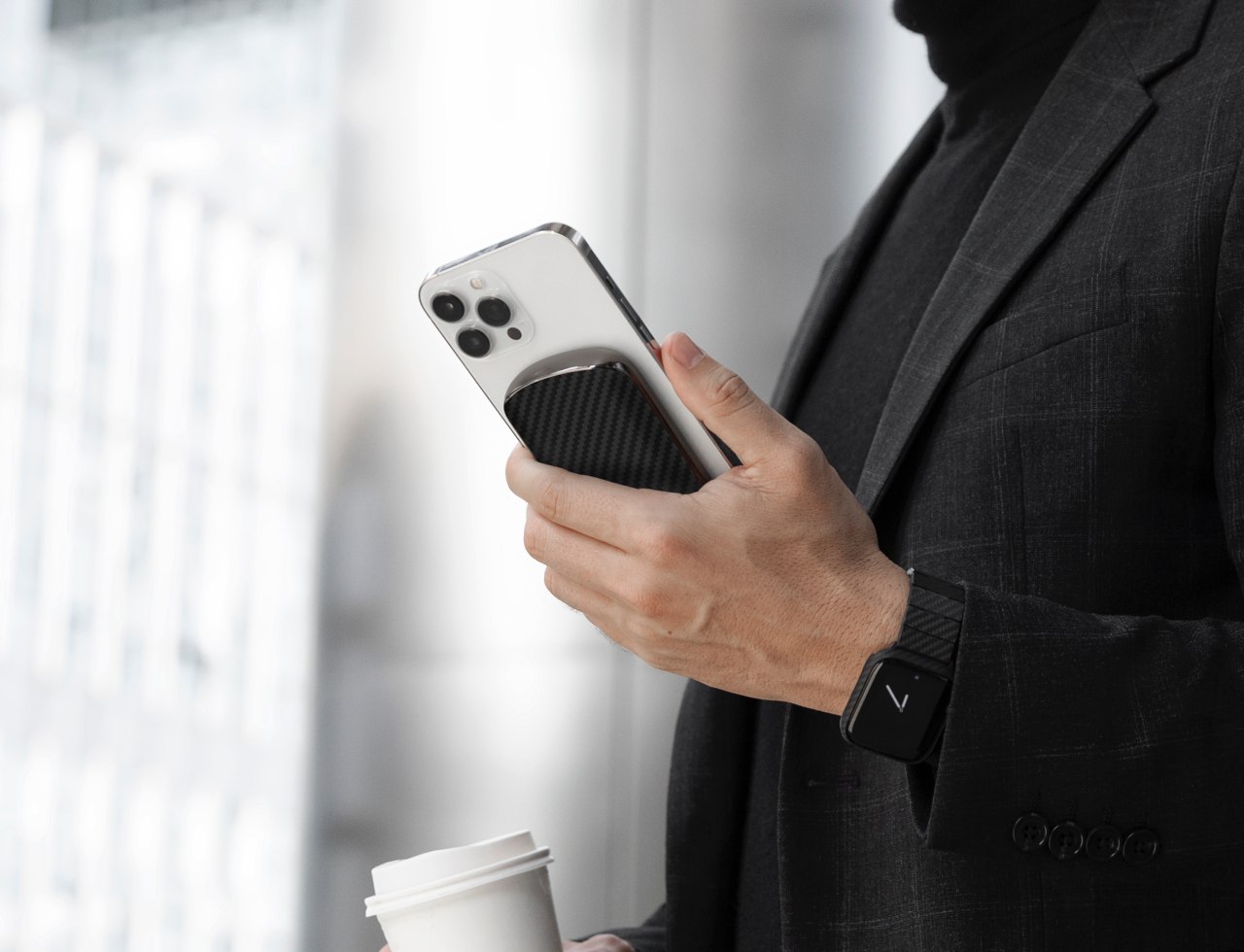 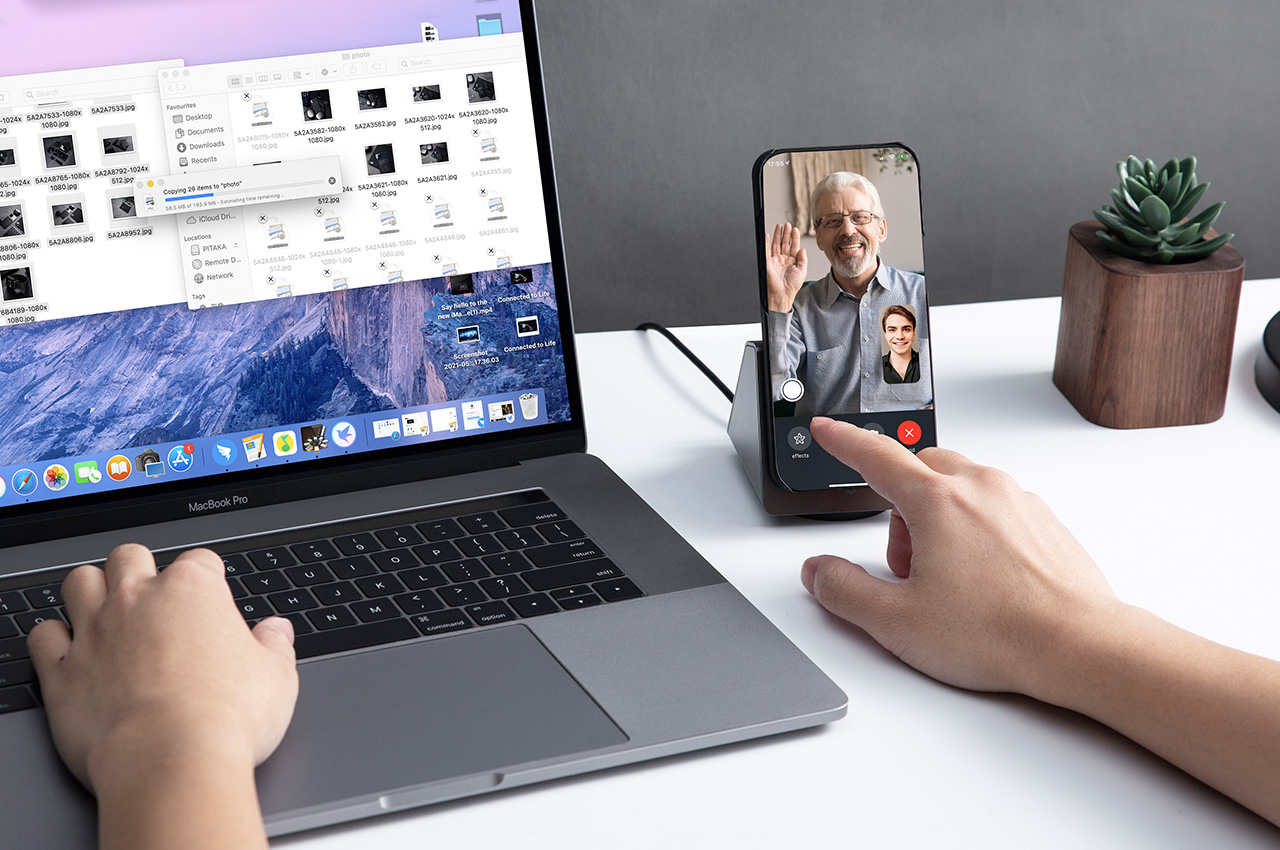 The sheer convenience of the MagEZ Slider lies in its ability to organize all your charging requirements in one place… however, that convenience is compounded once you realize that the MagEZ Slider has its own magnetic wireless power bank too. With a built-in 4000mAh battery, the power bank (which could also be found on the 2019 MagEZ Juice) is the MagEZ Slider’s pièce de résistance, letting you effectively travel while your gadget charges. The power bank sports a rounded, curved design that makes it easy to slide in and out of pockets, and it docks perfectly into the MagEZ Slider’s stand too when you’re finally at your desk. You’ll never need a single charger or Apple accessory again… and given the fact that the Cupertino-based company’s stopped shipping chargers with their flagship devices, the MagEZ SLider could easily be the most useful and versatile little accessory you own.

Created as a successor to the CES 2019 Innovation Award-winning WT2 earphones, the Timekettle M2 are a pair of TWS earphones that have an unusual…

https://www.kickstarter.com/projects/1126199540/talsam-connect-with-a-loved-one-using-smart-jewelr For the better part of the decade, we’ve seen social networks help bind the world closer together. People who otherwise wouldn’t know or talk…

Home Delivery in every literal sense

Not to be confused with THIS home delivery, the Delivery Stool by Amar Nath Shaw is for delivering babies at home. Given India’s rising population,…

By simply adding an aesthetic cap to it, designer Ryan Choi hopes to extend the useful life of a plastic bottle. Many bottles get dumped…