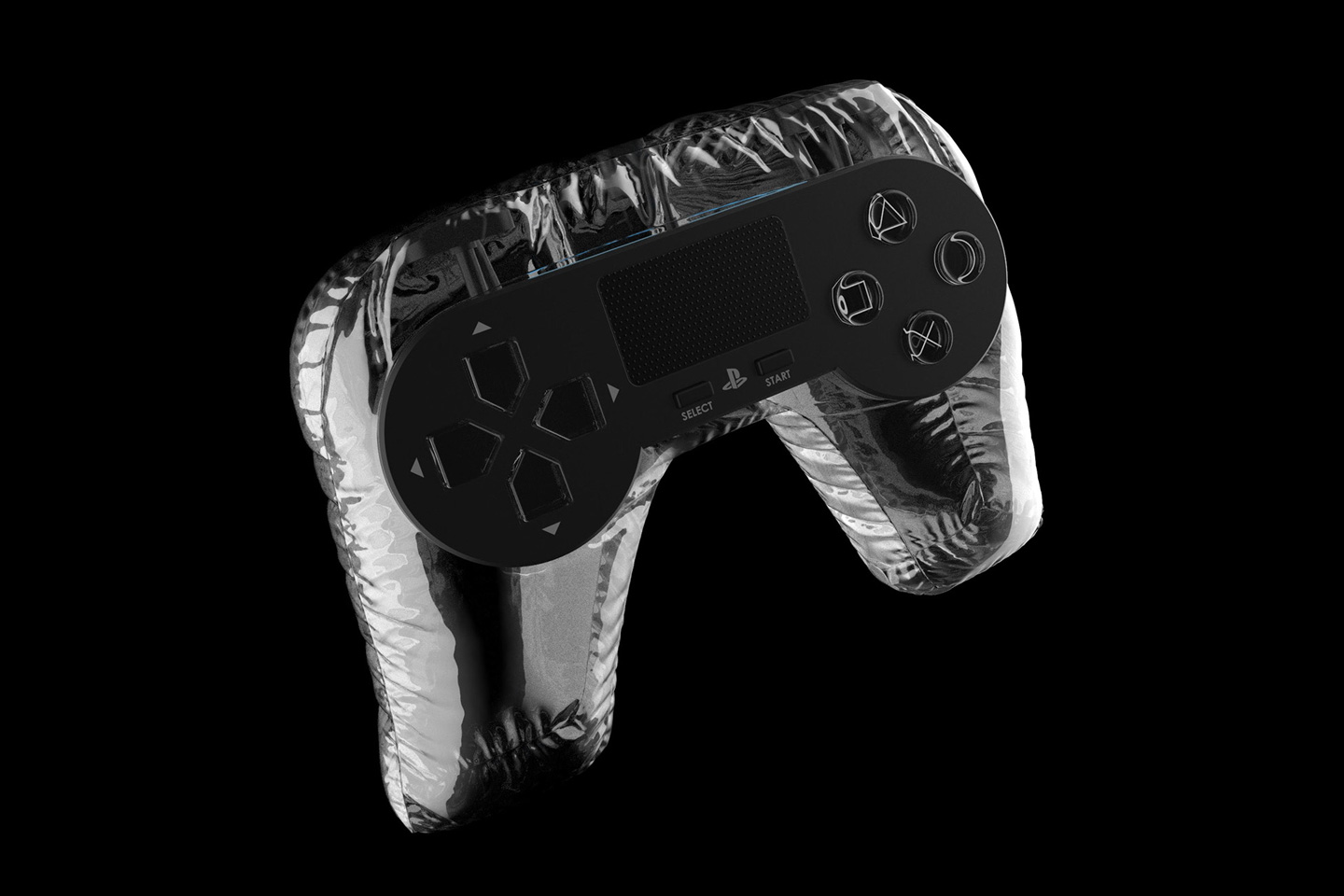 If inflatable neck pillows can be comfortable, why not an inflatable gaming controller??

Meet AirShock, an absurdly innovative PlayStation controller that ditches those curvy, bulky ergonomic form languages for something much more simple. Designed with an inflatable body, the AirShock puffs up to its full size while in use, allowing you to game comfortably while the controller’s inflated design readjusts to the contour of your palms. The result isn’t just a comfortably soft controller design, it’s also ridiculously lightweight, and if you ever feel the urge to fling your controller in a fit of rage after losing a game, you can rest assured that the AirShock’s shock-absorbing design will simply bounce against the floor instead of shattering to pieces. Genius, isn’t it?? Let’s unpack the design further. 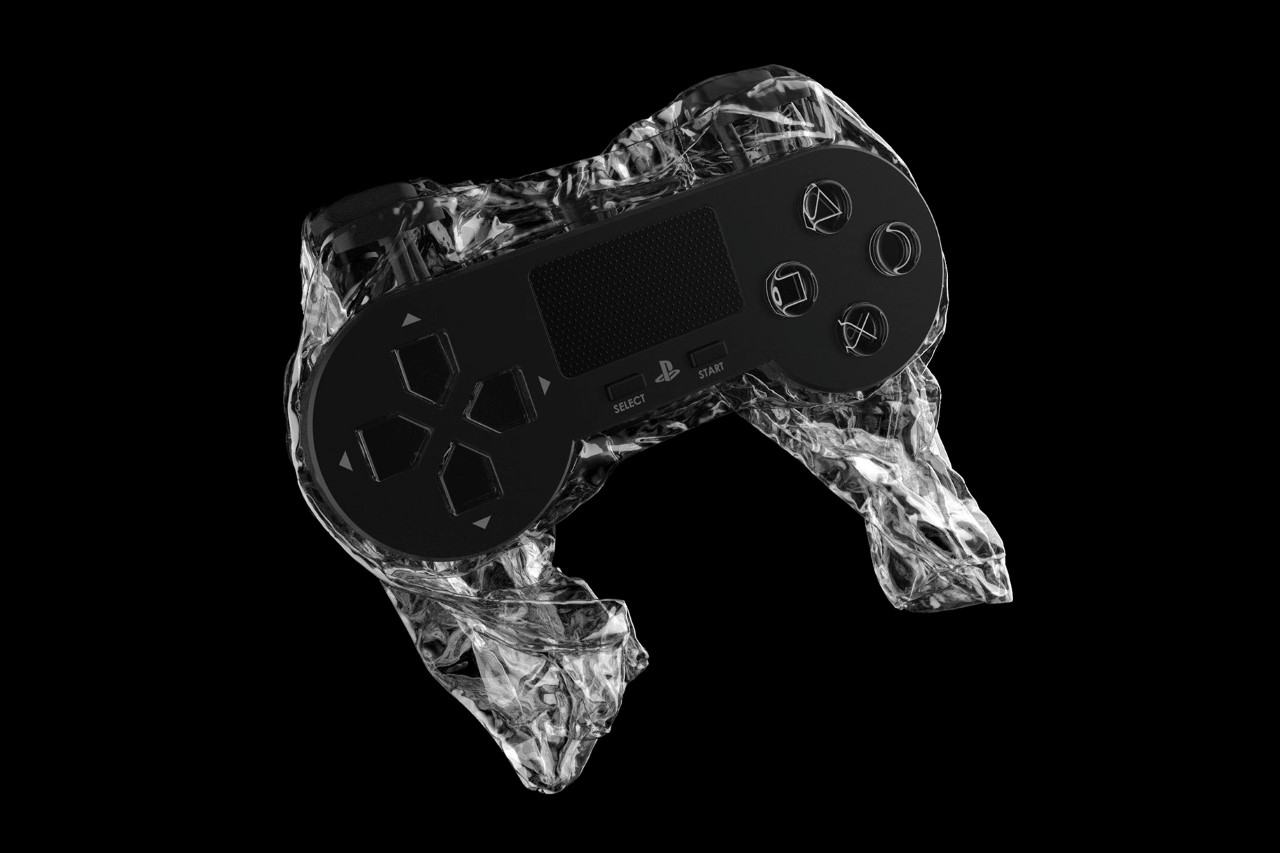 The wild PlayStation AirShock controller design comes from Philipp P, also known as the Running Guy Studio on Instagram (you may remember his inflatable keyboard design from last year). His extensive experiments with using ‘air’ as a material carried forward even to an iPhone case that debuted earlier this year, and finally the AirShock, a pretty clever controller design that ticks all the supposed boxes. It’s lightweight, ergonomic, has the ‘squeezability’ of a stress toy, and is virtually unbreakable. 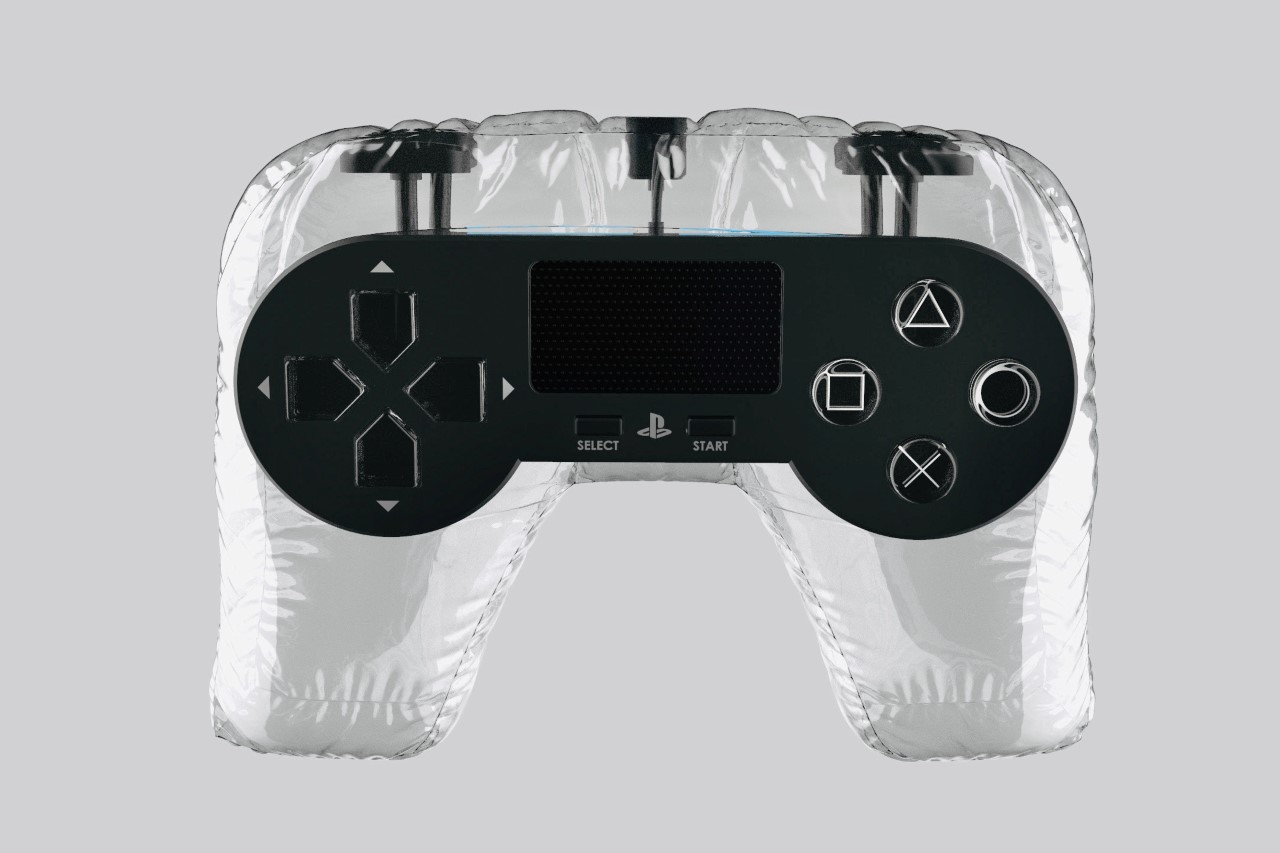 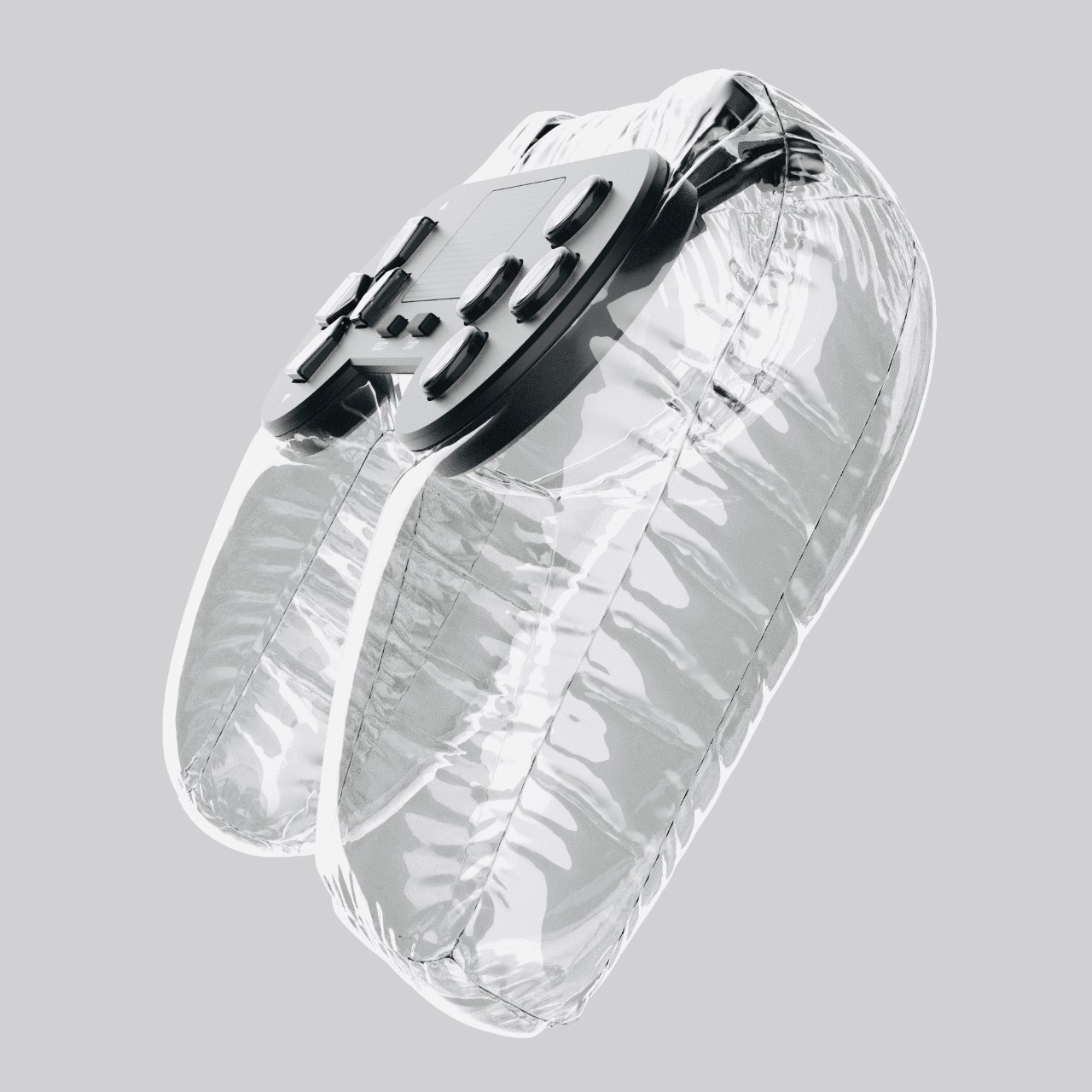 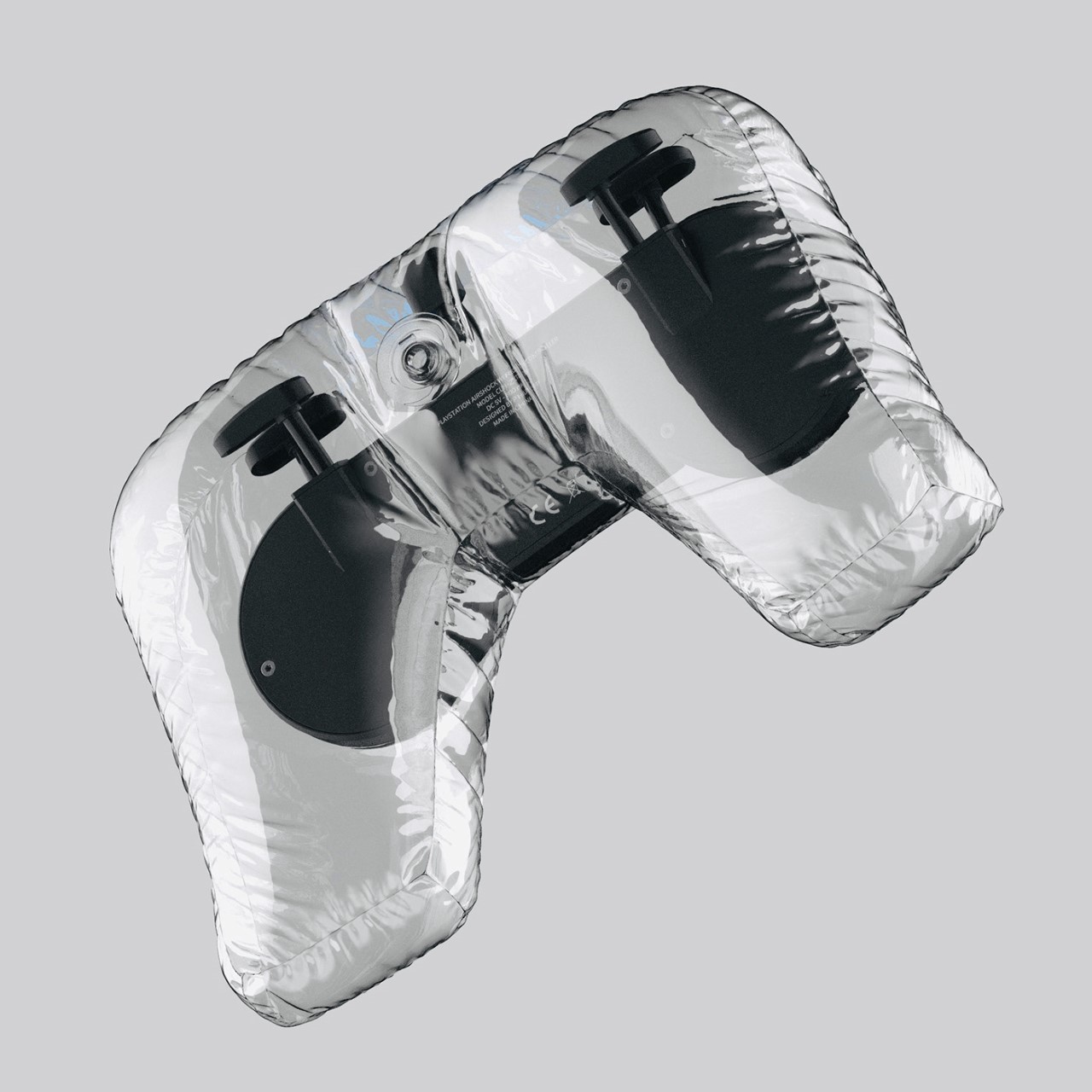 The PlayStation AirShock controller comes relatively flat when it’s shipped deflated, and can be inflated using a nozzle on the rear of the device. The design of the gadget cleverly splits the controller into its two distinct halves – the controls, and the controller’s body. The controls lie within a module that’s fitted into the inflatable outer body, complete with a D-Pad, action keys, and even shoulder buttons. While there aren’t any joysticks on the AirShock, it does come with that touch-sensitive panel on the top, and even blue LEDs built-in on the inside that cause your entire inflatable controller to glow thanks to its airy hollow design. Personally, if the inflatable plastic were frosted, the entire controller would turn blue by diffusing the light, looking even better! Finally, a USB-C port on the rear (between the shoulder buttons) lets you power the controller. The transparent design reveals a pretty bare-basics construction although zooming in shows am 800mAh battery built right under the controls, so aside from being lightweight and see-through, the AirShock is wireless too! 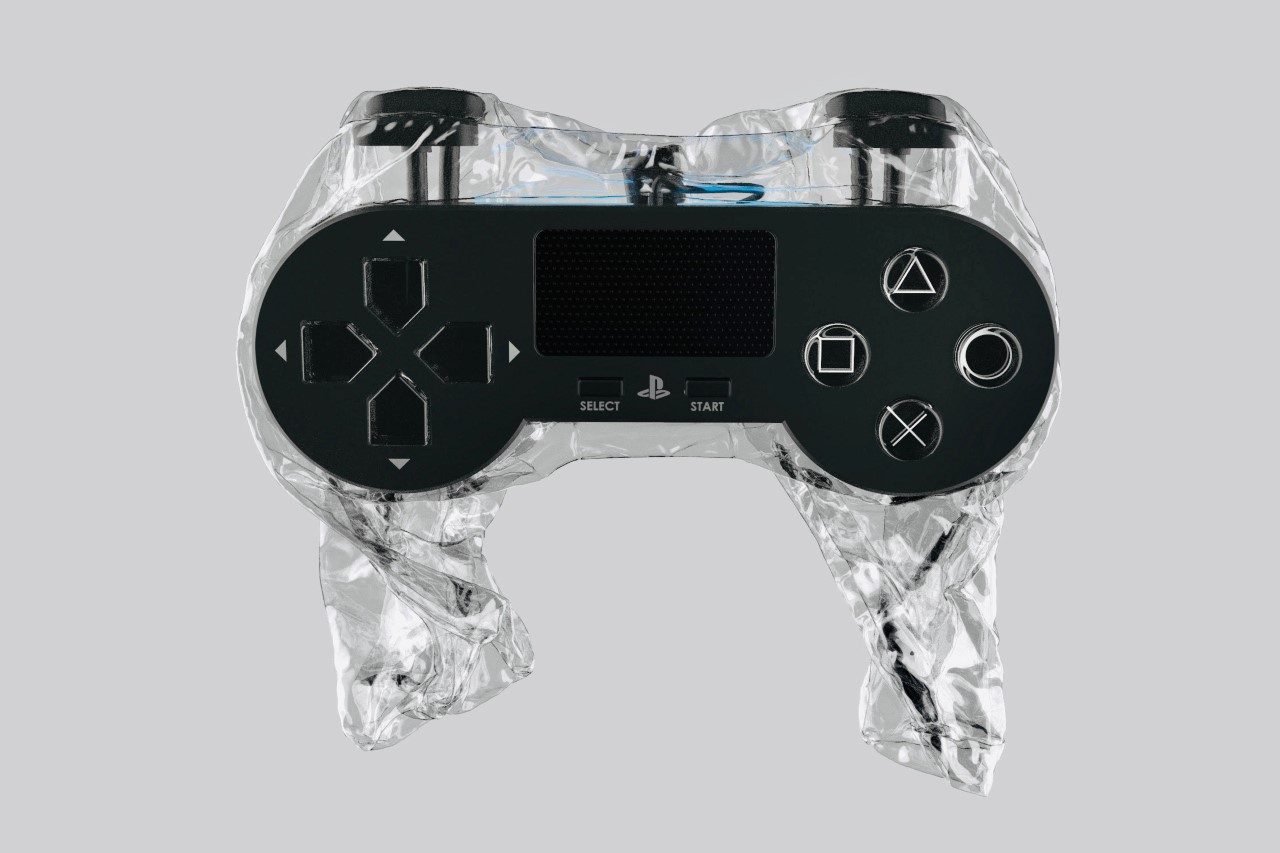 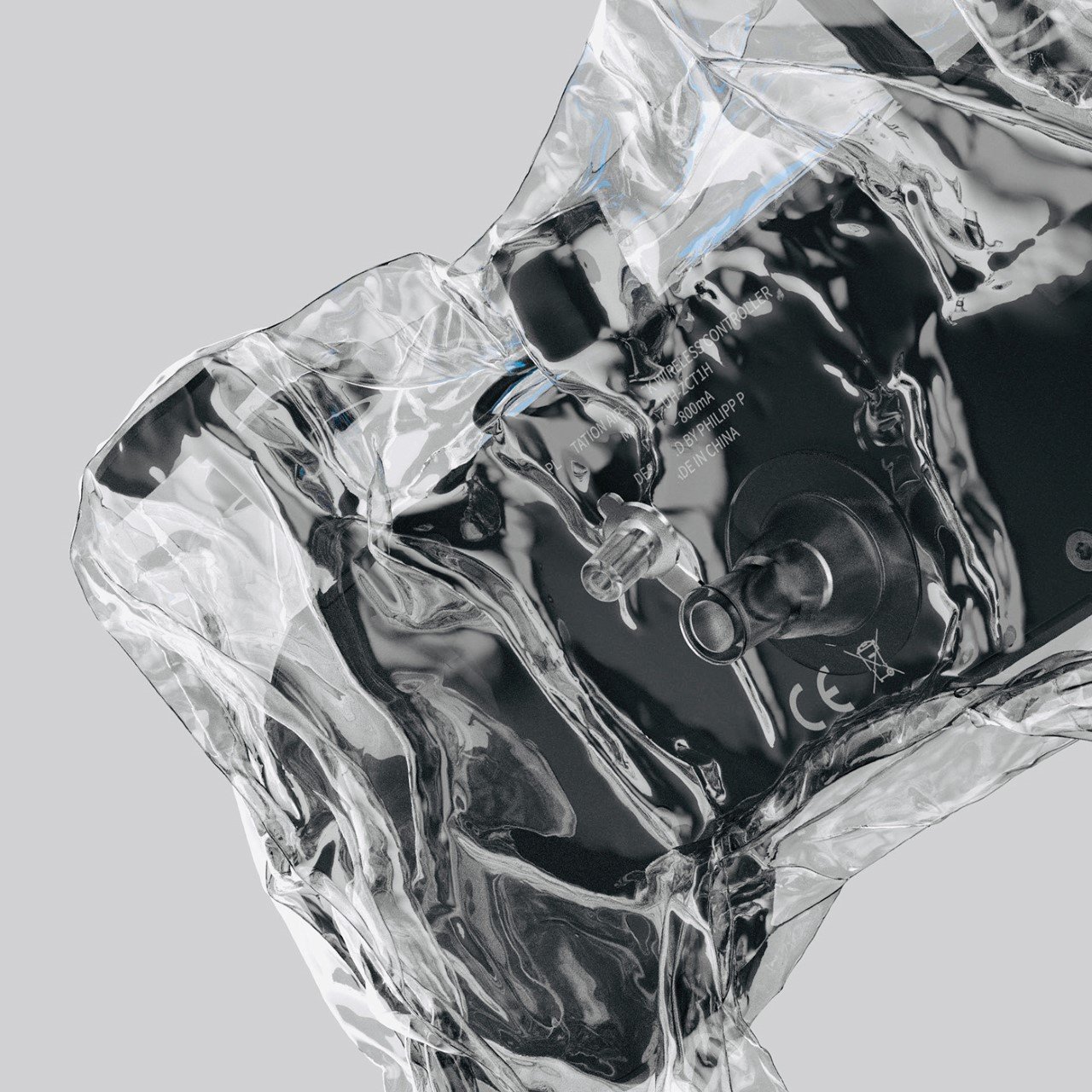 A closer look at the controller just makes you appreciate how well the details end up forming once inflated. Arguably, the AirShock may be great for logistics (since it ships deflated), but from an ergonomic standpoint, I allude to the sentence at the beginning of the article. If an inflatable pillow can be comfortable enough for your head, why can’t an inflatable controller be comfortable in your hands? One could argue that constant skin contact with the shiny plastic sheet may just end up making your skin sweat, although that could simply be fixed by using a different sort of plastic, or even plastic with a breathable fabric cover. For now, Running Guy Studio’s PlayStation AirShock is just a conceptual direction for ergonomic controllers… and let me go on record by saying that I absolutely love it! 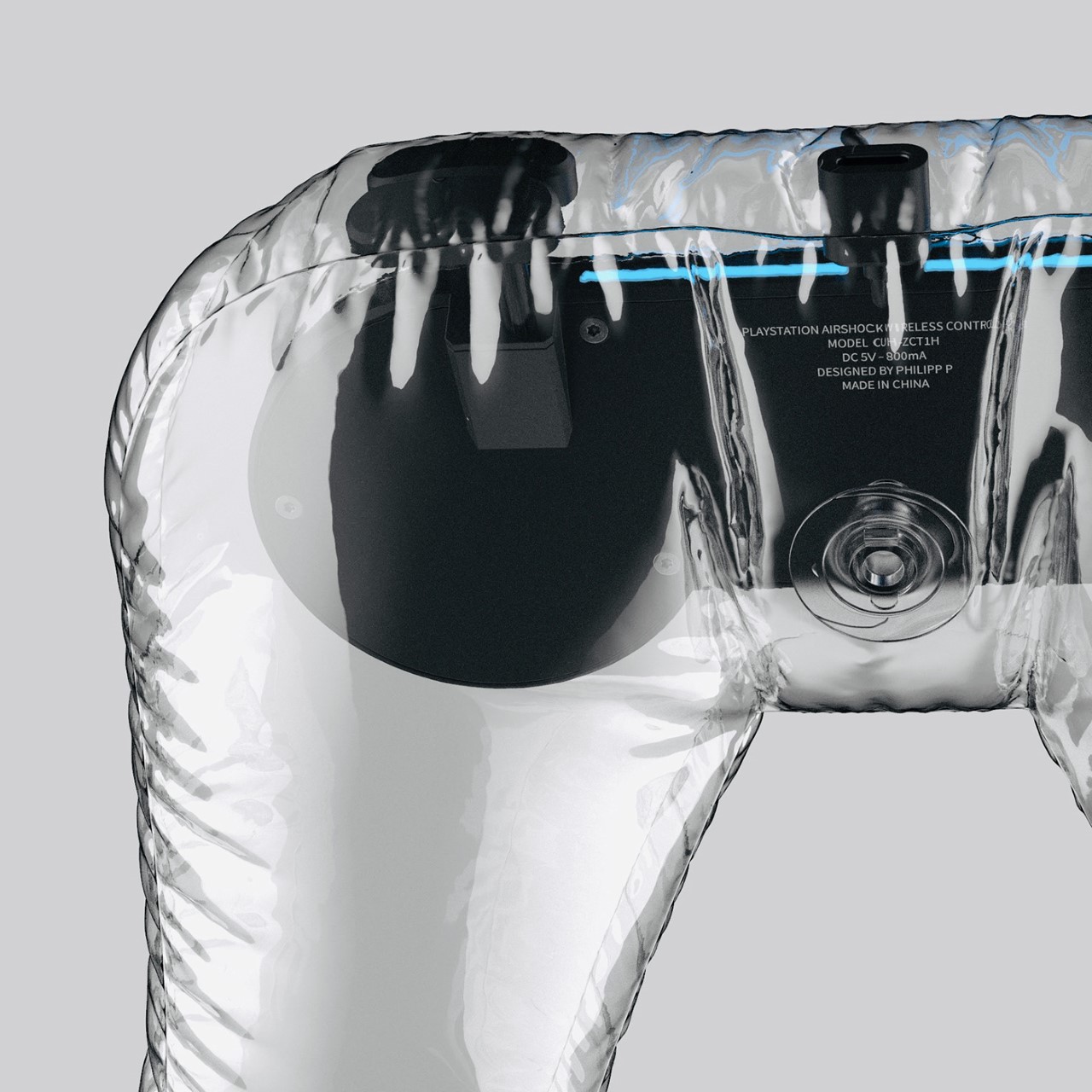 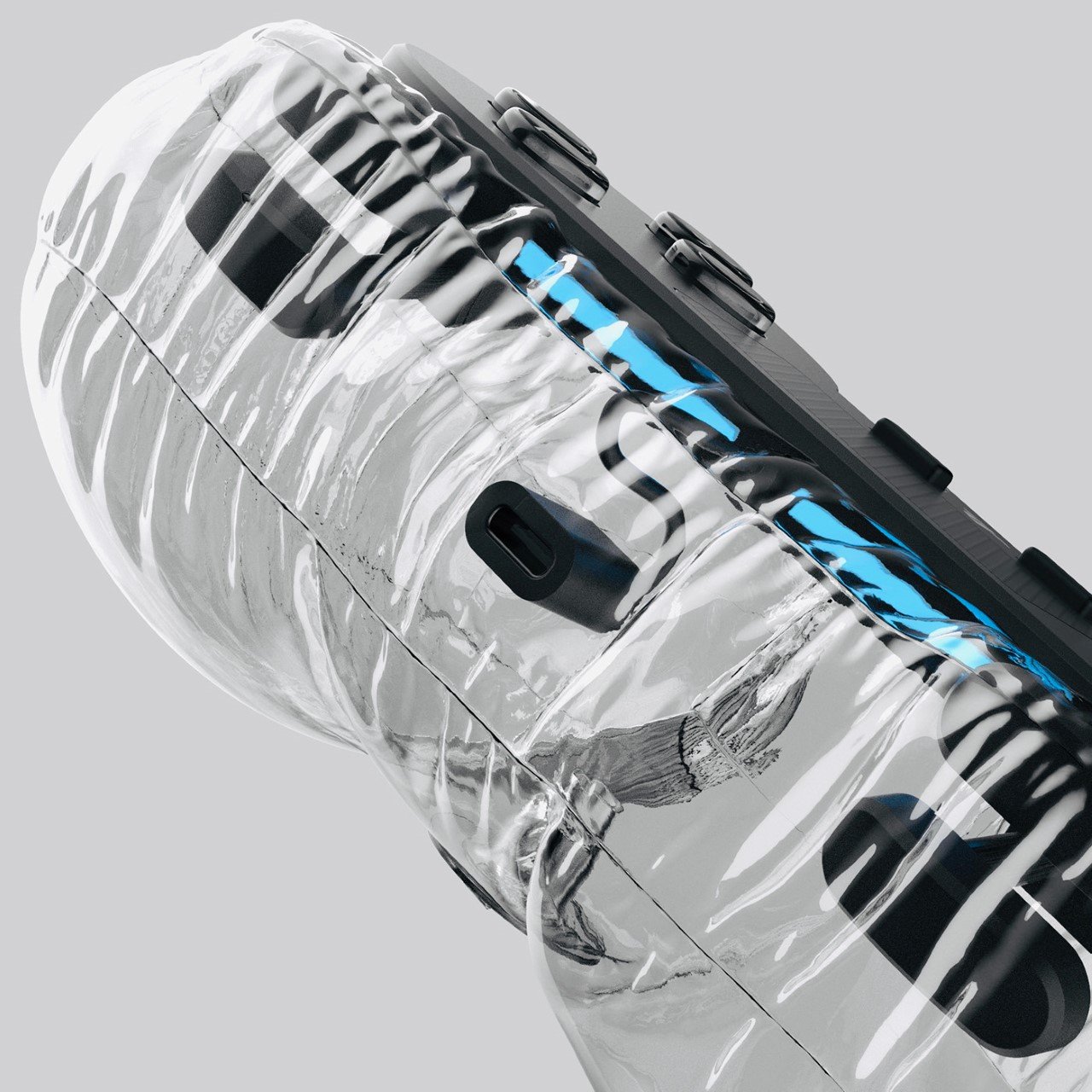 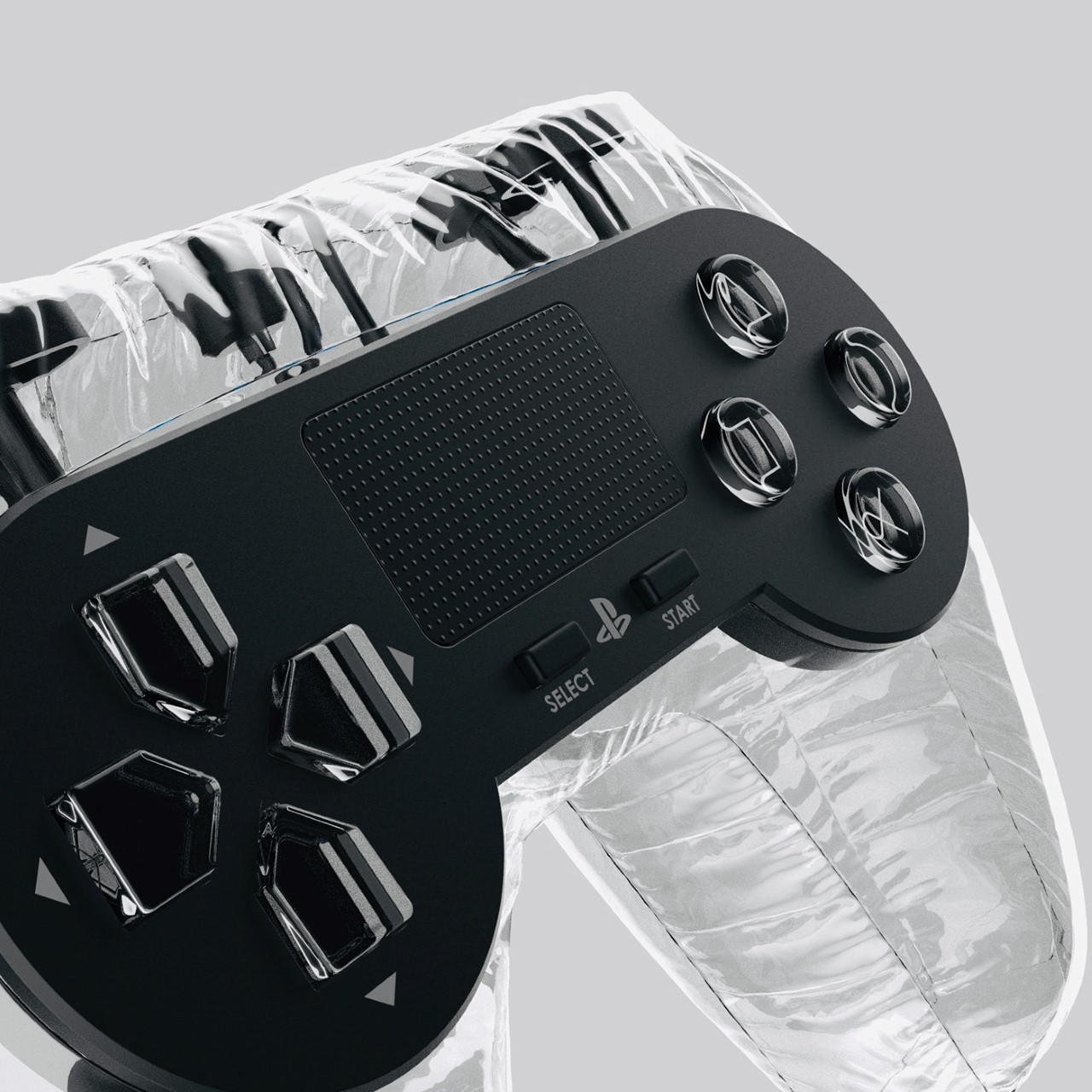 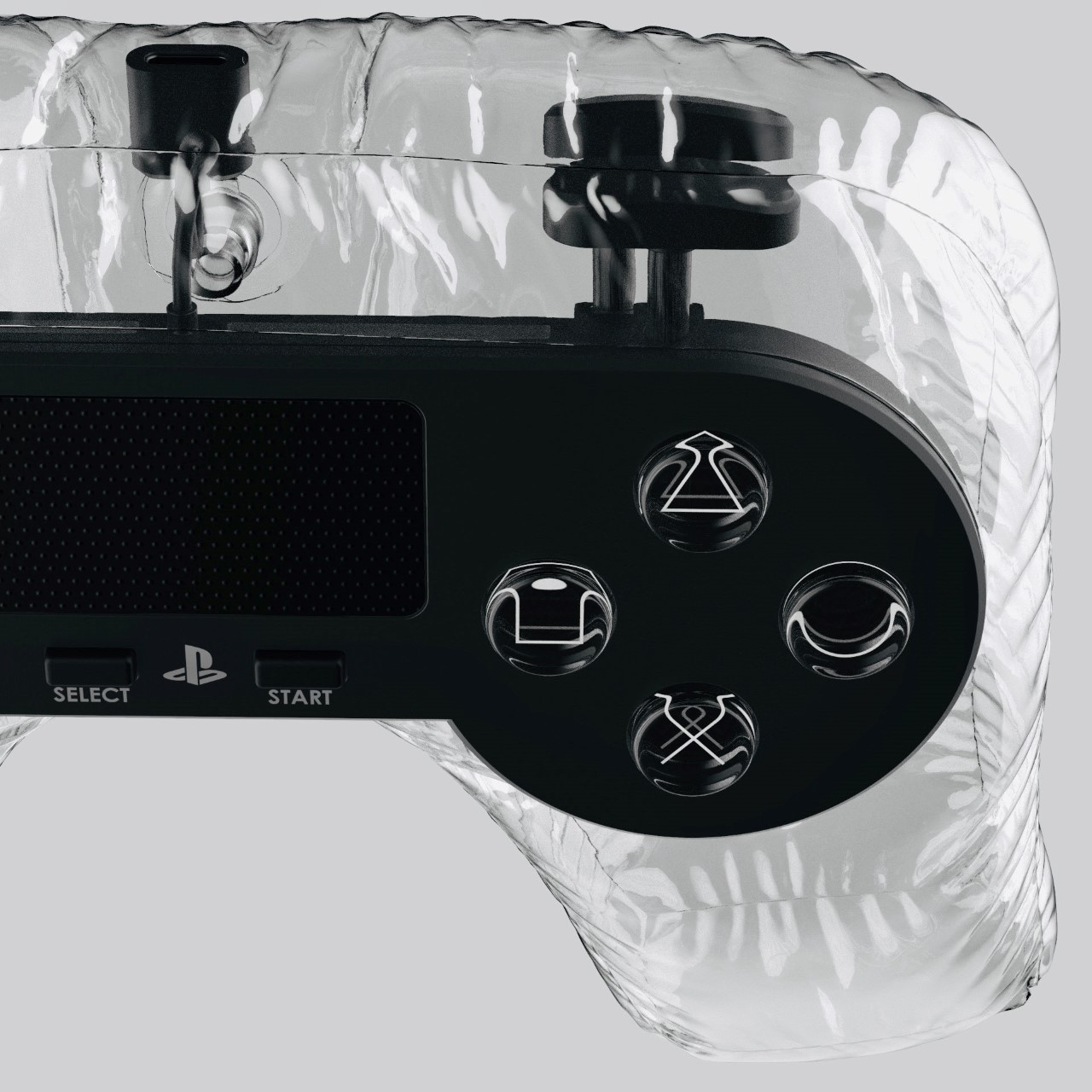 Apple’s AirTag is perhaps one of the most popular mini trackers in the market today. It is being honored with related accessories that allow the…

When a hip wireless charger met this space-conscious air purifier

We may perceive the air within our homes to be clean and healthy, but sometimes it is anything but that, and as a result it…

No matter how advanced photography tech may get, there’s something about DSLRs and the fact that they always reign supreme. Anyone who owns a DSLR…

Introducing, InfiniteUSB – the next biggest thing since the USB itself! This revolutionary design is an open chain of USB ports, granting an unlimited supply…