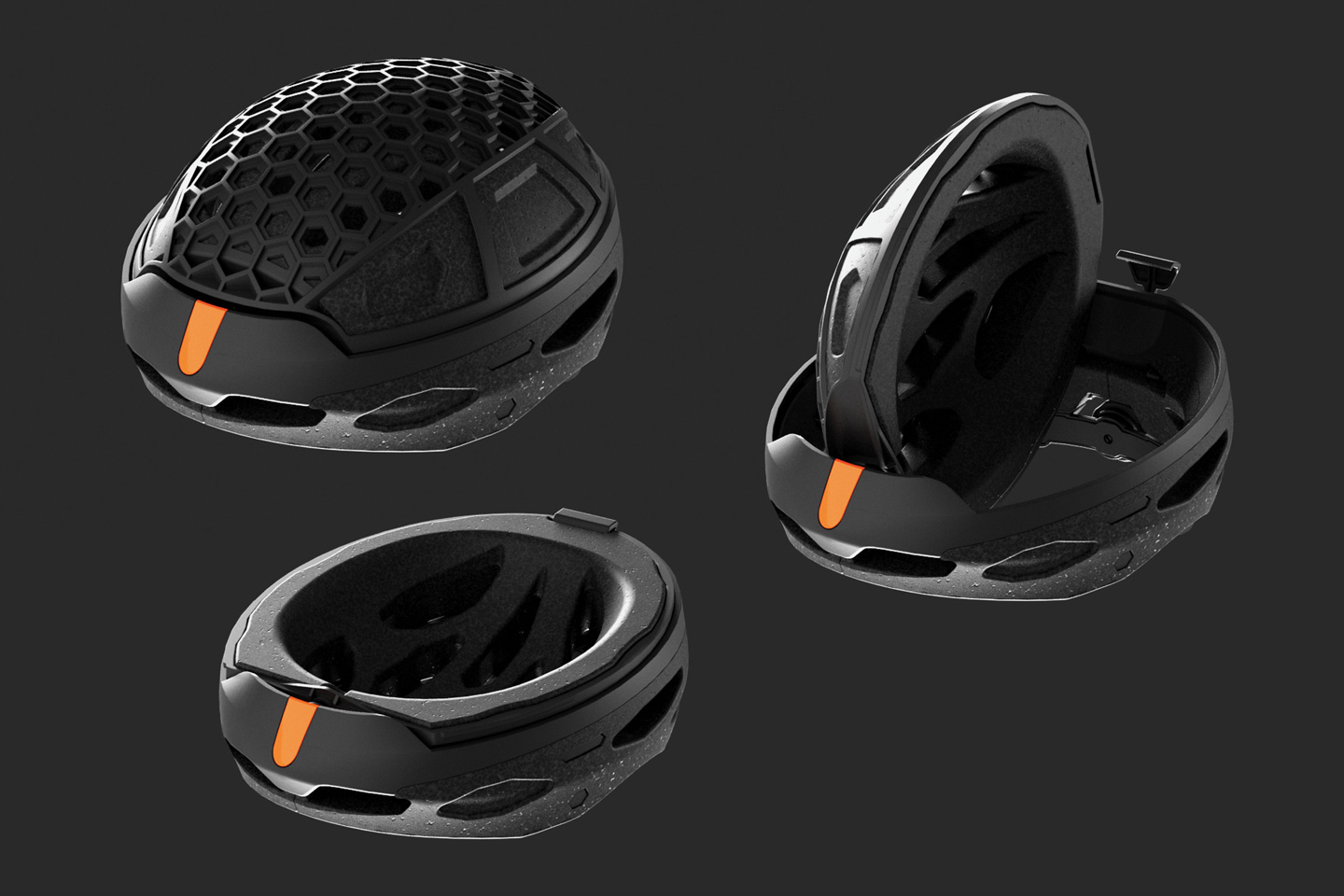 It’s almost hilarious, but the two leading reasons for people not wearing helmets are the fact that it ruins their hair, and that it’s too bulky to carry or store anywhere. While there isn’t really an immediate solution to the former (apart from going bald), an ex-Aston Martin engineer devised a clever way to solve the latter problem. Meet the Flip-Clip Go, a Red Dot Award-winning ‘packable’ helmet that folds down to occupy 50% of its original volume, making it easier to carry with you when not in use.

The helmet’s patented design features a flippable top that turns its dome-shaped form into a frisbee that’s easier to stash in bags, carry under one’s arms, or place inside the cargo space in scooters. Measuring 81mm in thickness when closed, the Flip-Clip Go’s bulkiness gets reduced by 50%, making it much more convenient than traditional bulky helmets that can be cumbersome to carry around.

The helmet’s highlight is its Flip-Clip™ Technology, which allows it to alter its volume by flipping and folding inwards. This nifty little feature turns the bulbous helmet into an 81mm disc that’s about as bulky as a novel or a dictionary. Cutting the original helmet’s mass by up to 50%, the folded helmet can easily be stashed away, so you don’t need to rely on archaic techniques like locking your helmet to your bike. 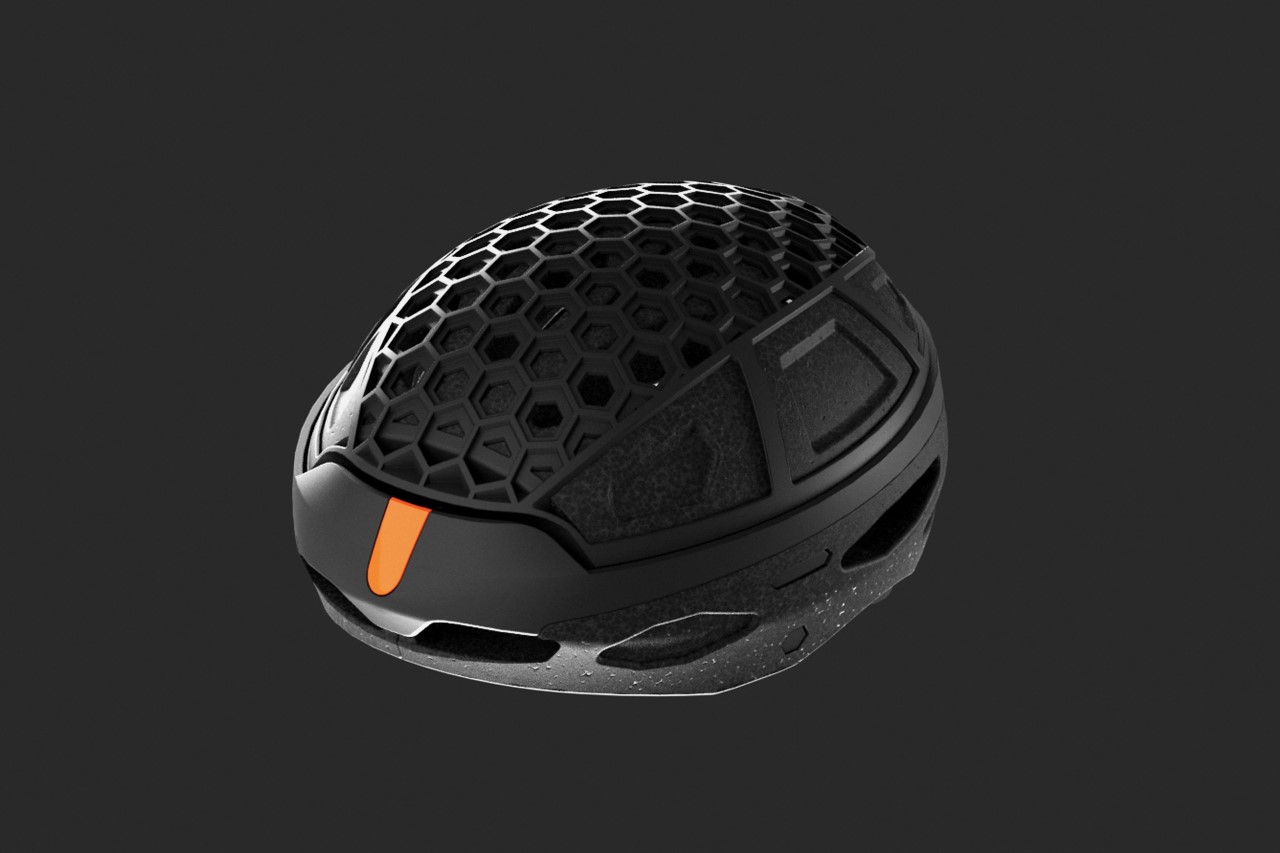 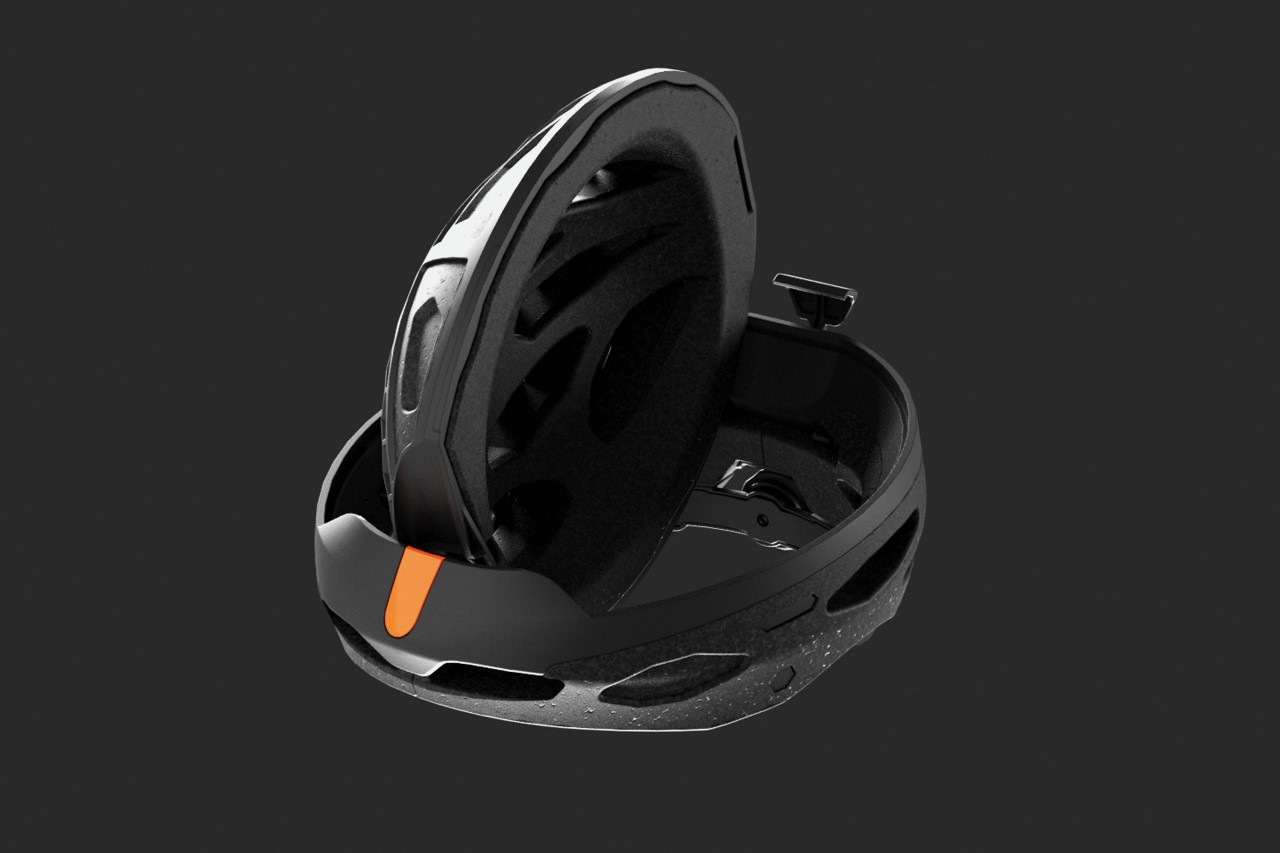 The helmet was conceptualized by Josh Cohen, Dom Cotton, and Will Wood, friends and bicycle enthusiasts alike (and co-founders of Newlane). The light bulb moment came when Josh used a hire bike in Central London. Feeling a sense of vulnerability without the helmet, he spoke to Dom, who immediately hopped on board and was soon followed by Will, an ex-engineer at Aston Martin who helped conceive the helmet’s design, its details, and finalize its material choices to create a helmet that was effective, lightweight, sustainable, and yet affordable. 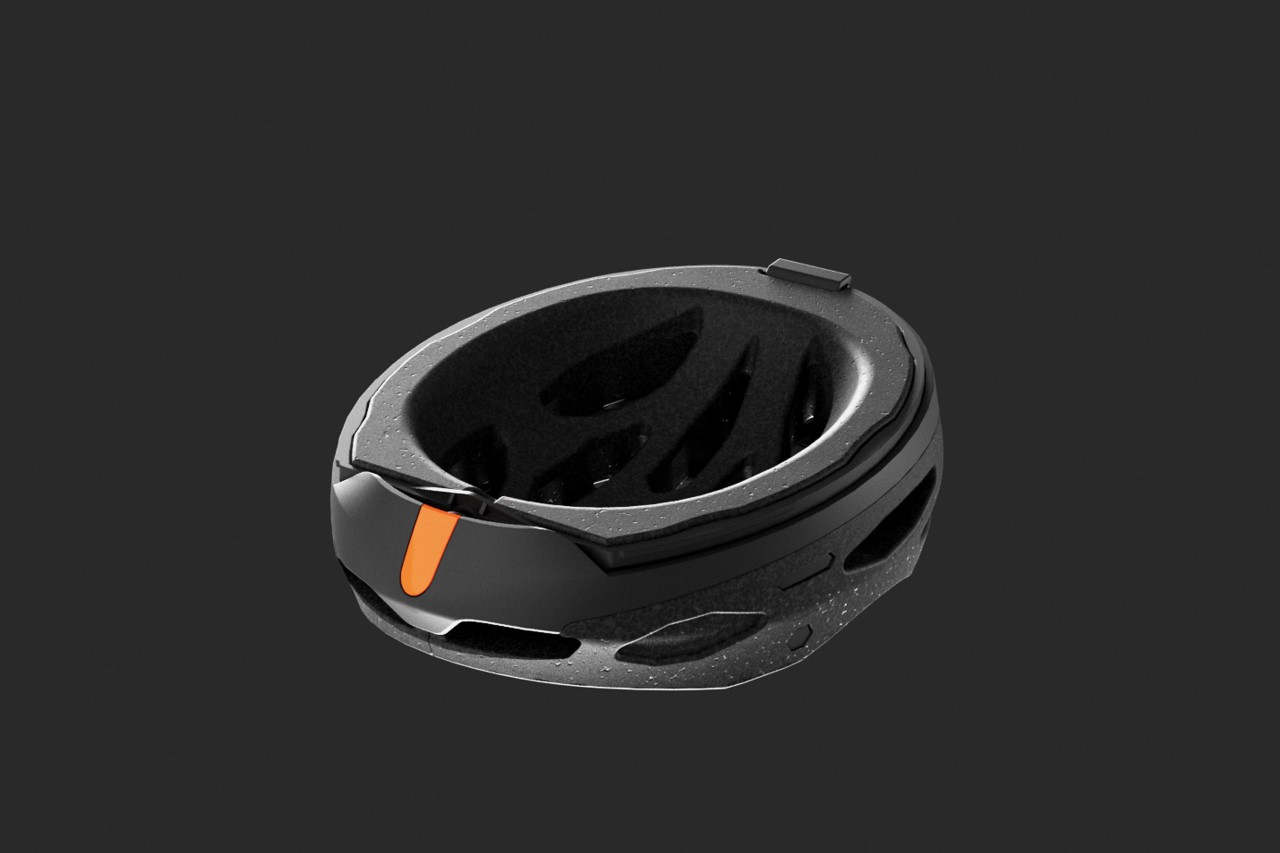 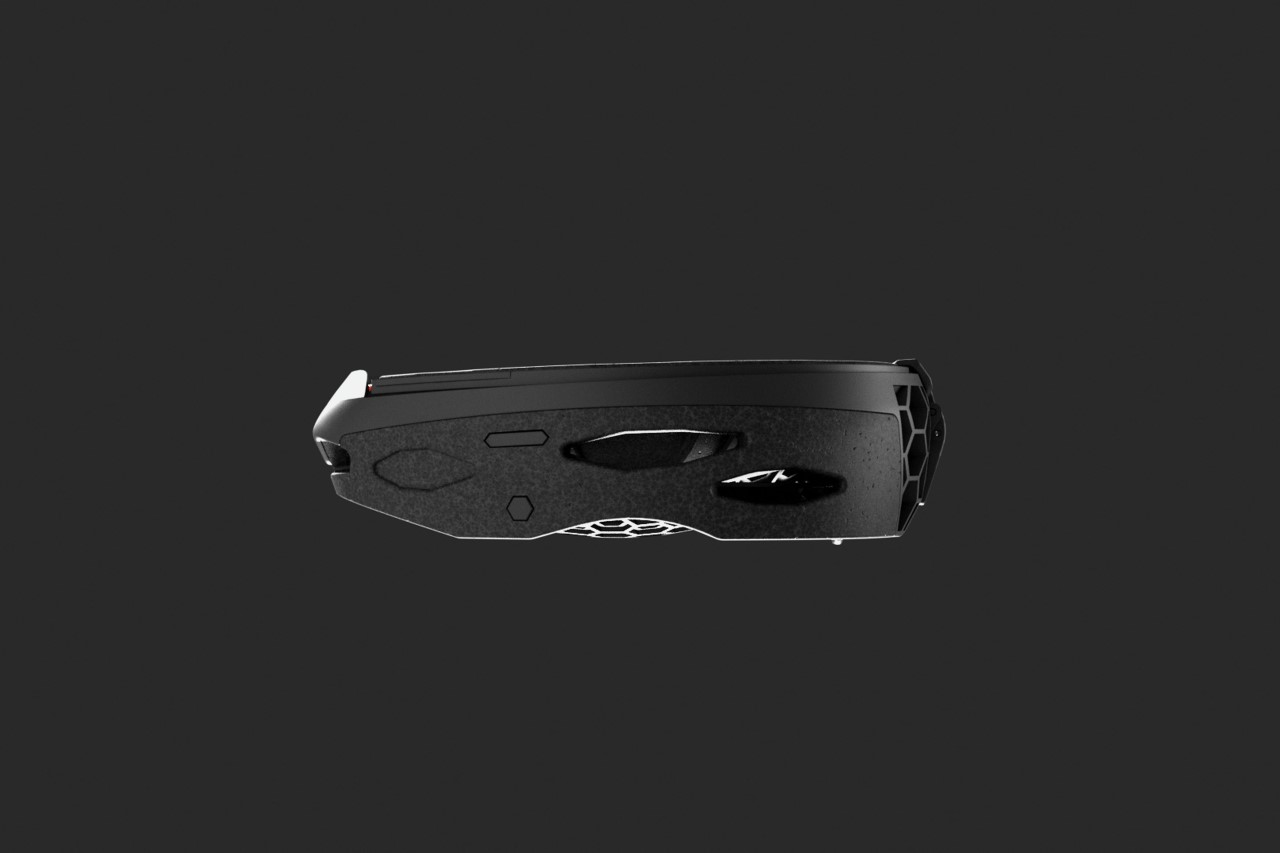 The Flip-Clip Go helmet comes made entirely from recycled plastics, salvaged from oceans and landfills, before being treated, processed, cleaned, and re-molded. It comes with a relatively bare-basics design, featuring an airy construction that relies on honeycomb structures, and is supported by a protective inner layer of expanded polystyrene (EPS). Manufactured in partnership with Cameron-Price in the UK, each helmet helps recycle as many as 20 plastic bottles worth of plastic, and Newlane hopes to be entirely carbon-free by 2030.

The Flip-Clip Go helmet is a winner of the Red Dot Design Concept Award for the year 2021. 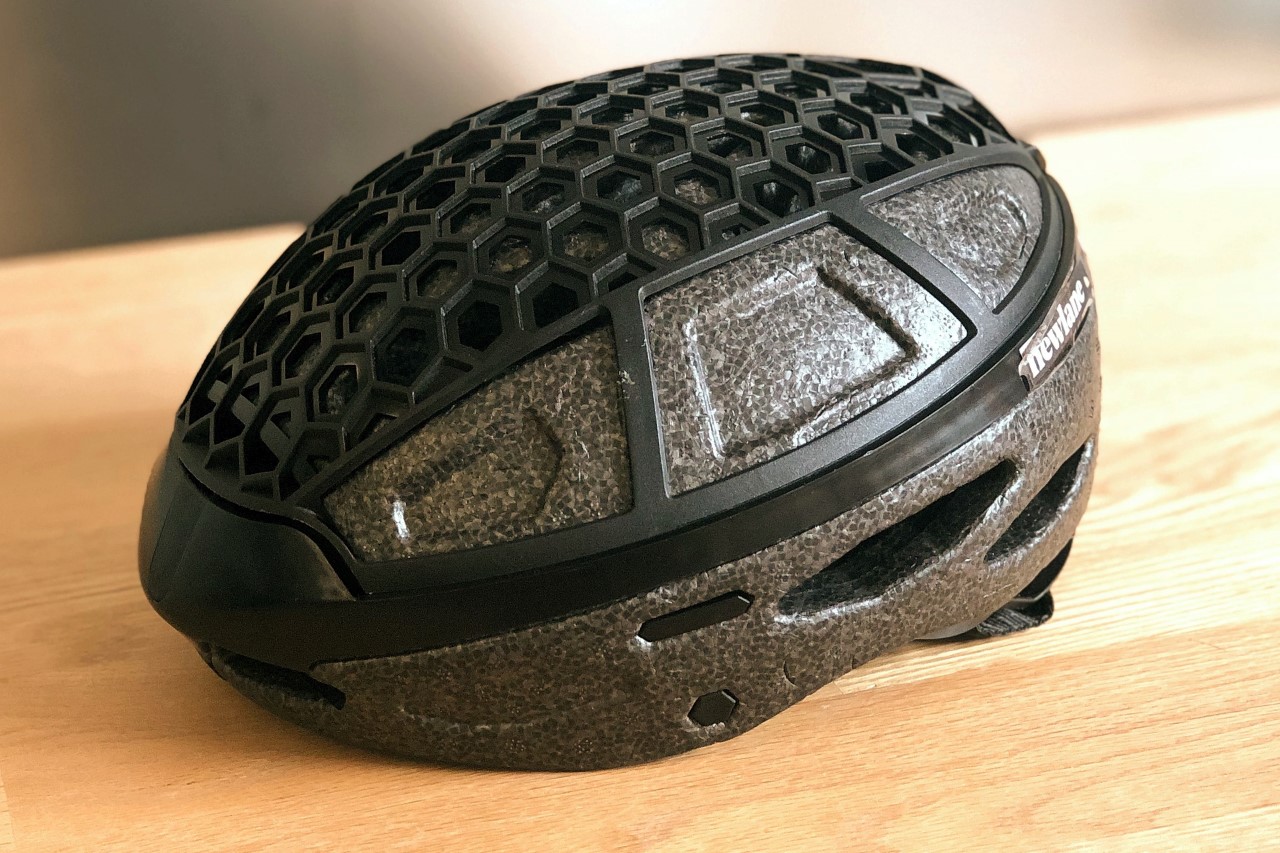 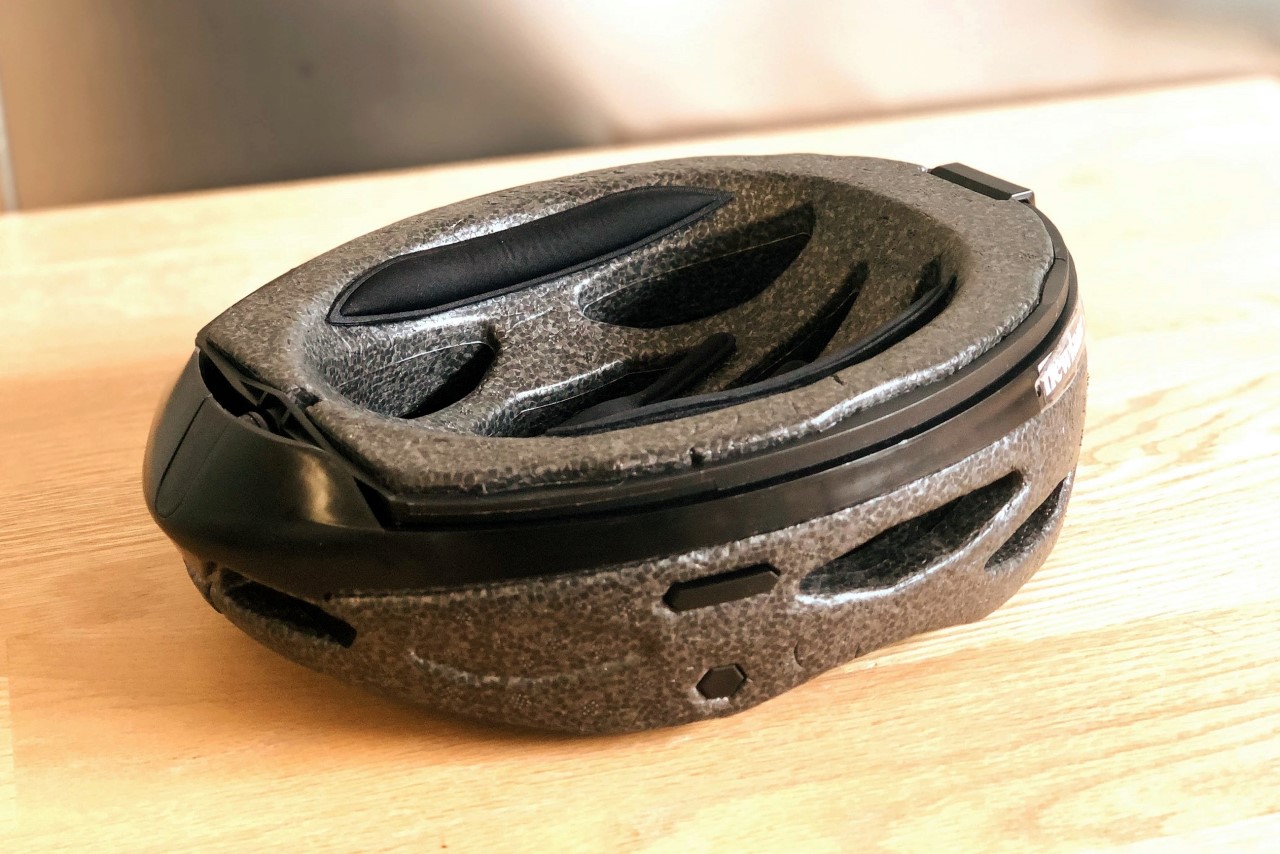 This complete home gym blends with your home interiors to retain your work-workout balance!

﻿ While some of us are eager to get back into the gym following a year’s worth of on and off stay-at-home orders, the rest…

To match Electrolux’s spiffy new look (dat logo tho!), Electrolux Design Lab is getting a makeover of its own! The 13th year of the challenge…

Royole’s rollable keyboard design is even more flexible than its tablet!

Royole seems to be truly championing the flexible, foldable future. After the Flexpai, arguably the world’s first folding tablet, the California based startup is looking…

The Moto Z, although lesser known in the commercial electronics circuit, has created an incredible eco-system of mods completely uplift the phone’s functionality, making it…