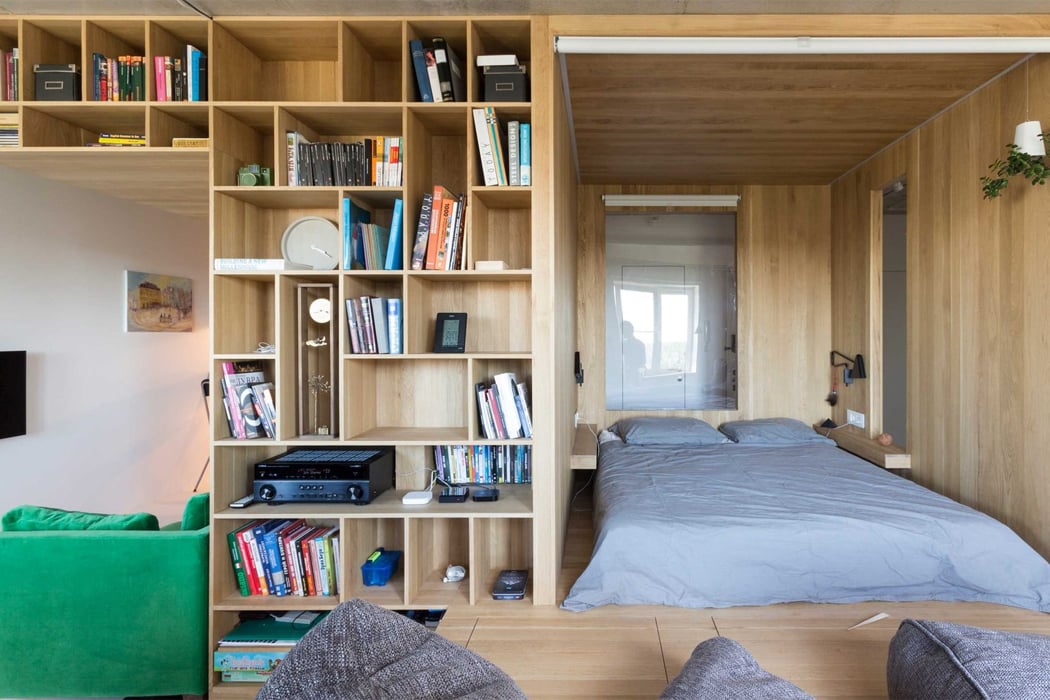 Tiny living isn’t only for cabins and campers. Making the most of a small studio apartment space takes some serious skill and creative know-how. However, when it comes to apartments, renovation projects are out of the question– I’m still worried about how I will fill the screw holes in my walls. Redesigning a studio apartment space, the teammates behind Ruetemple, an architecture, and interior design studio, have created a bedroom box module that saves space and makes the studio feel a lot bigger.

To give the studio space more defined and delineated areas, Alexander Kudimov and Daria Butakhina of Ruetemple, built an elevated module from wood, with plenty of storage options and a cave-like zone works as the studio’s enclosed bedroom space. The idea to create a bedroom module initially came from Kudimov’s and Butakhina’s plan to build a wooden structure that would absorb the studio’s many functional elements, including storage space, a living area, and a platform area for getting ready in the morning. The bedroom module mainly contains the studio’s sleeping area– a secluded section of the elevated platform that provides a space for the bed to remain separate from the rest of the apartment. The cozy den remains hidden from view for the most part, but a large window situated at the head of the bed dissolves the barrier between the studio’s hallway and the newly formed bedroom.

Adjacent to the ‘bed-den,’ deep, geometric shelves offer plenty of storage options for books and even bulkier items that otherwise might be found stacked up high in a cluttered closet or off to the corner. Following the bookshelves to the platform’s side facade, a tall, uninterrupted wall provides an ideal backdrop for the studio’s living area, where a green velvet couch takes up residence. On the module’s opposite end, a miniature staircase leads the studio’s resident to the hallway where access to the module’s more hidden storage units can be found. 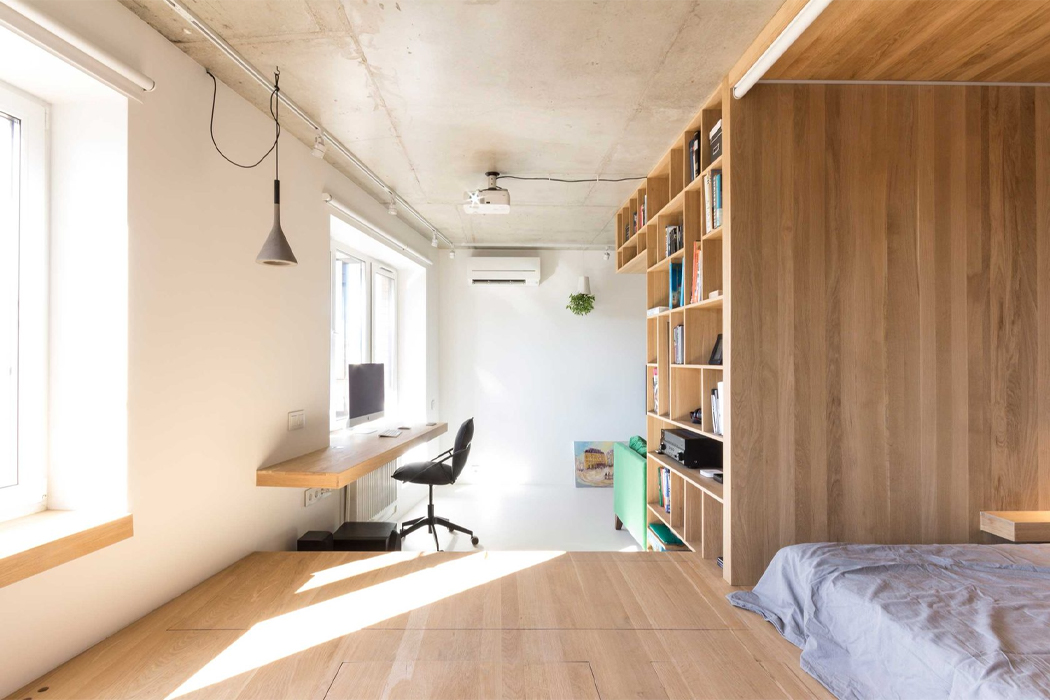 The module’s warm wooden build was chosen so that the abundance of natural sunlight would bounce off it and brighten up the studio. 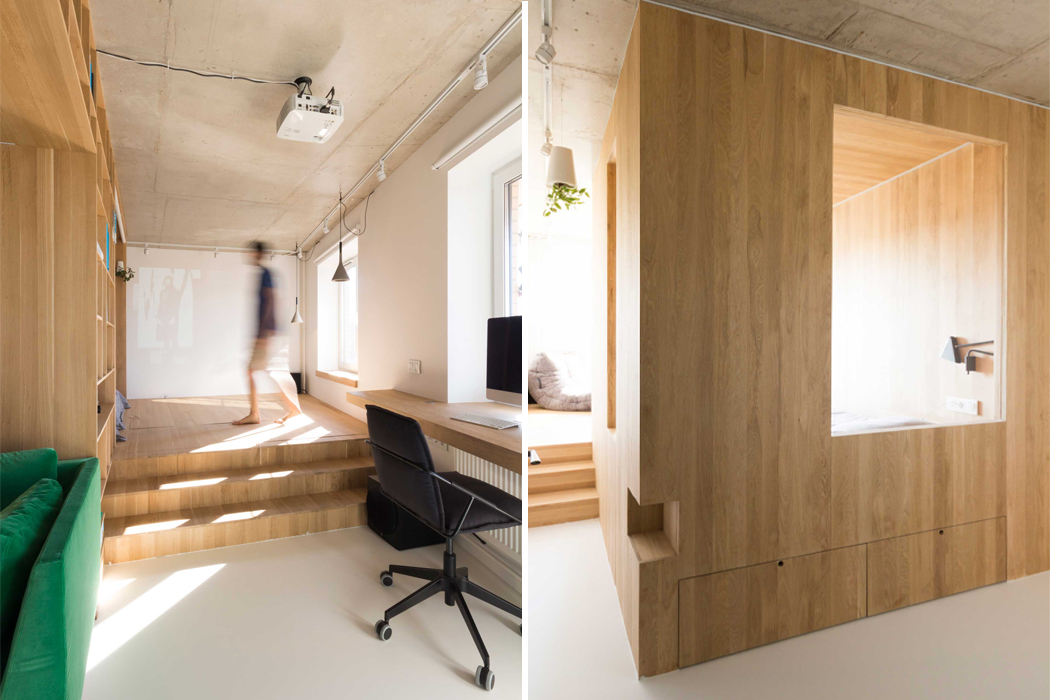 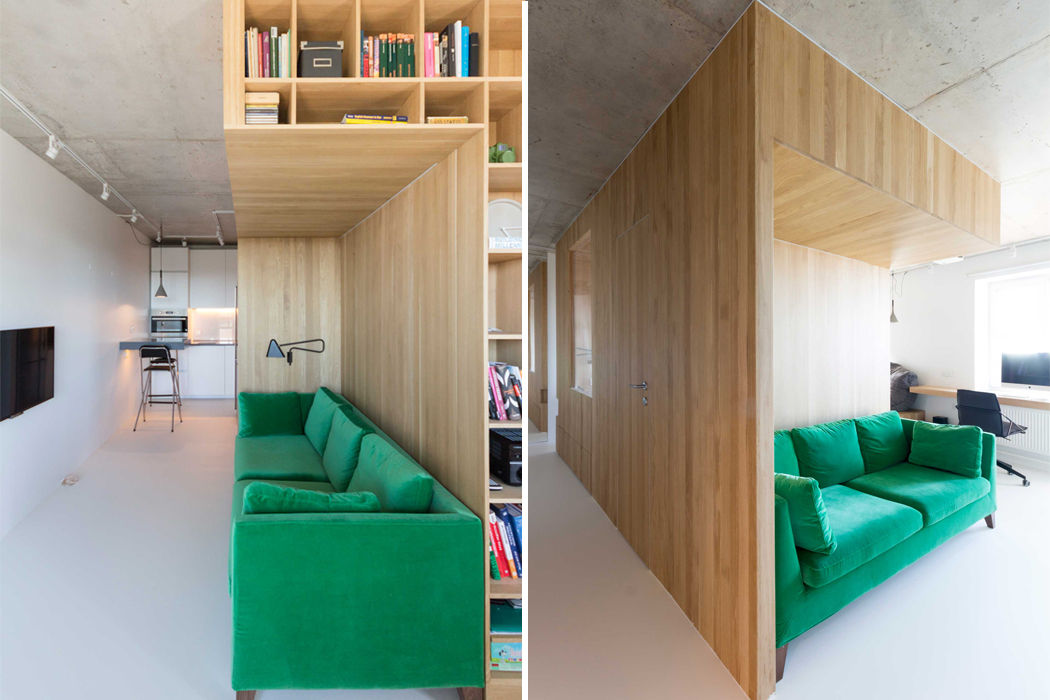 The bedroom module features a tall facade that enacts the use of an overhang to create a living area that feels more defined and purposeful. 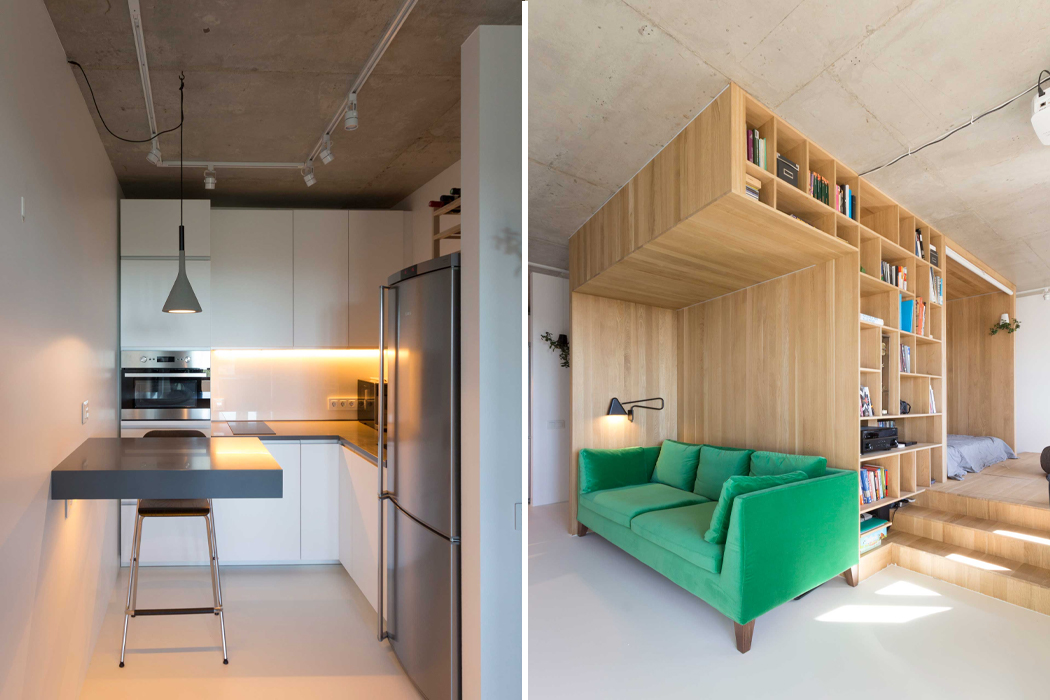 Similar to the standard apartment studio, this one comprised of an open area for the bedroom and a small kitchen, and a small hallway that leads to a separate bathroom. 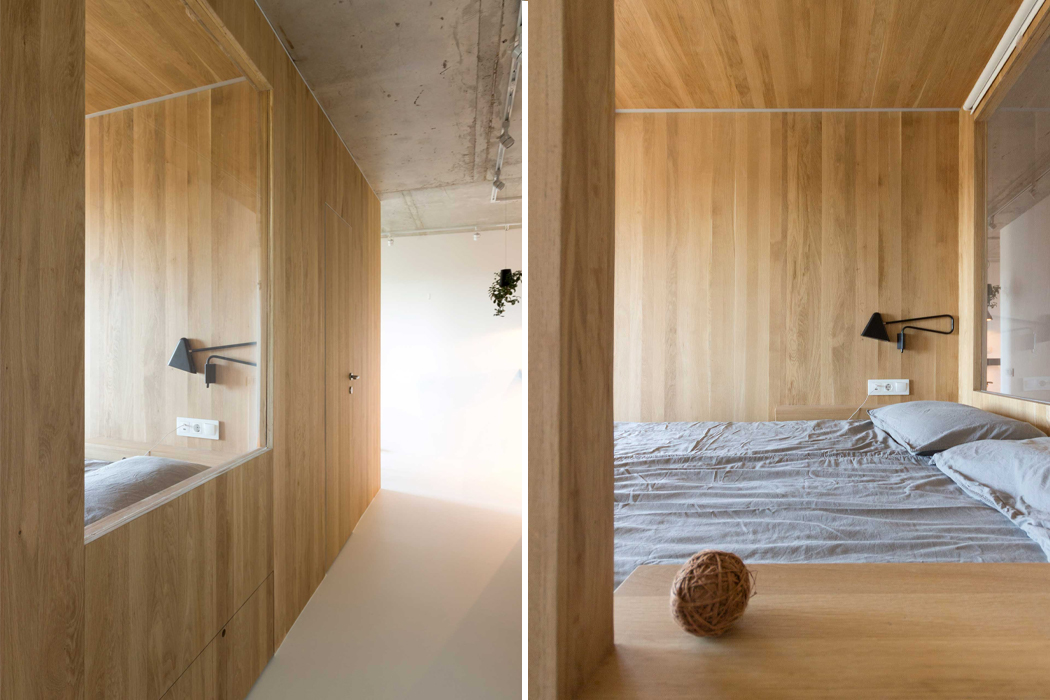 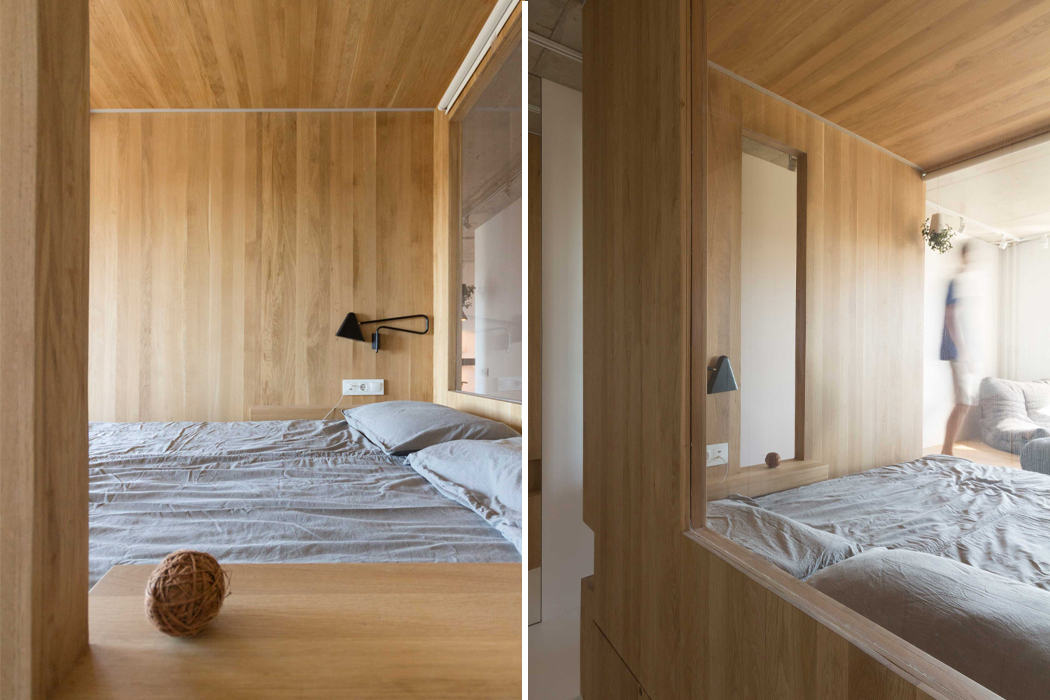 The module’s sectioned-off area for the bed features a large glass window that opens the module up to the rest of the apartment. 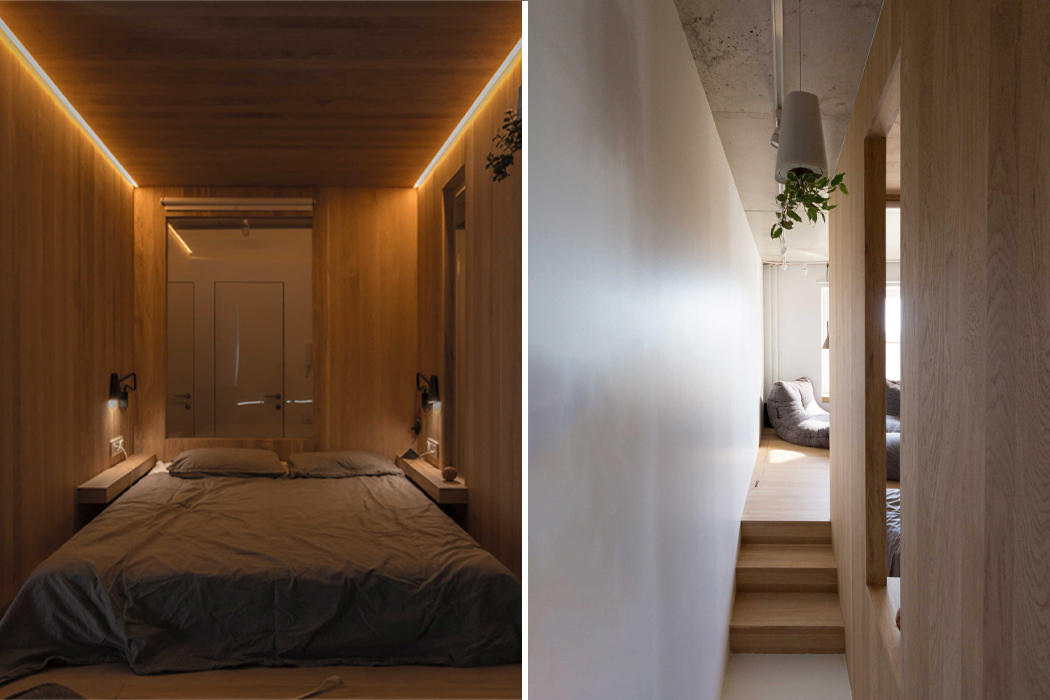 At night, the bedroom becomes a cozy, cave-like space, and stairs on one end of the module lead to the apartment’s hallway. 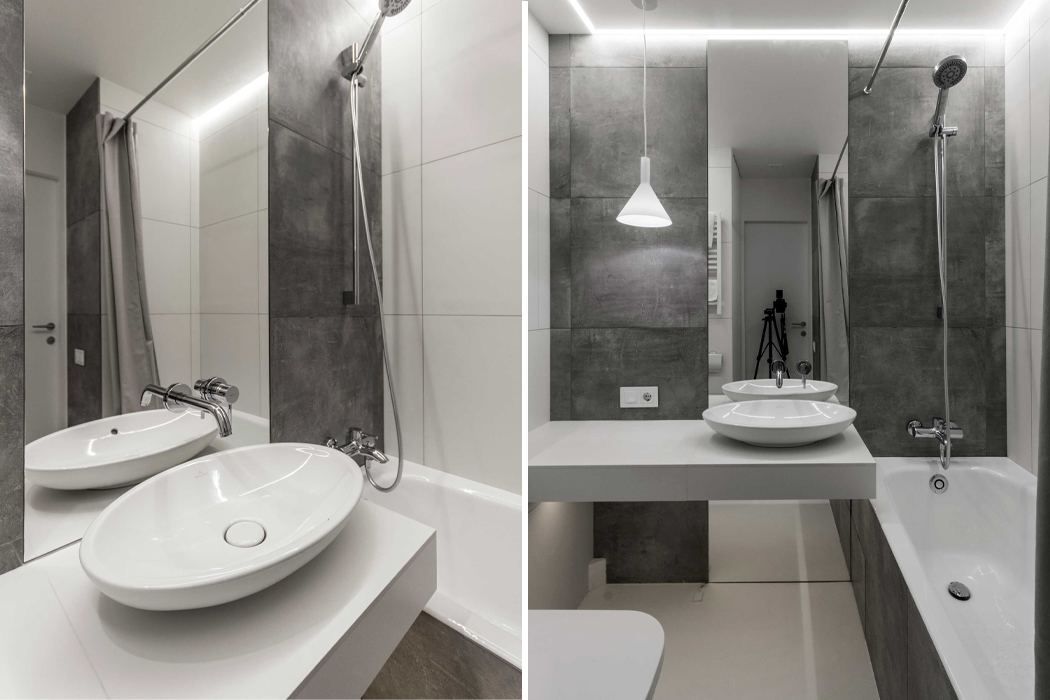 A remodeled bathroom features a floating sink and full-length mirror.

Creative brick design with a built-in planter turns the outer facade of this house into a vertical garden!

Created by architecture and interior design firm OA-Lab, the ‘Alley House’ is a small multi-family housing project with a brick facade, located in Seoul, South…

The IRI Lamp is like a modern campfire for indoors

The world will never run out of new lamp designs. Instead, there will be plenty of innovative lamps that will be introduced as more creatives…

It’s called the “Organized Mess” desk, and it’s designed by Jun Yasumoto. It’s got you utterly covered, you messy college student you. Or you messy…