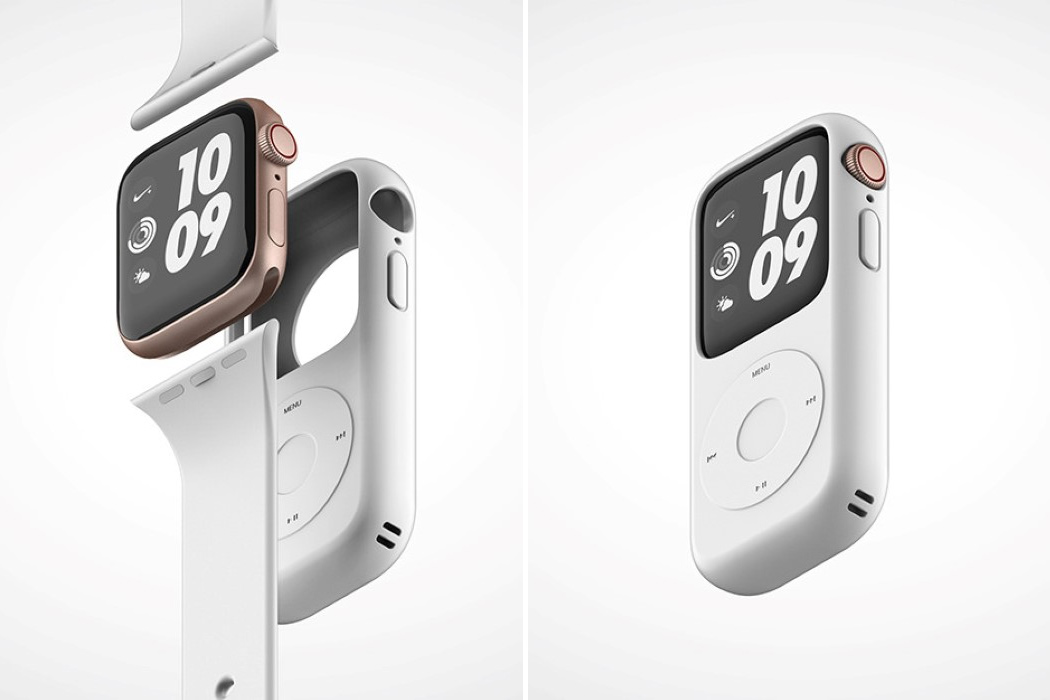 Apple launch events set the internet on fire – the iPhone 12 is finally unveiled after tons of rumors and concepts we get to e-meet the final design that matches the designs that have been circulating for a while. Now, while the YouTube reviewers go through the nitty-gritty of the phone’s design and features, what caught my attention is the lack of power adapter and earbuds. Citing the reason that the company’s aim is to be more environmentally friendly, we still need chargers and earbuds to run our phones in the day-to-day. YD brings you this recommended list of Apple accessories that will be the next purchase, maybe even before you get your hands on the latest iPhone 12, to be ready to bring home your latest smartphone! 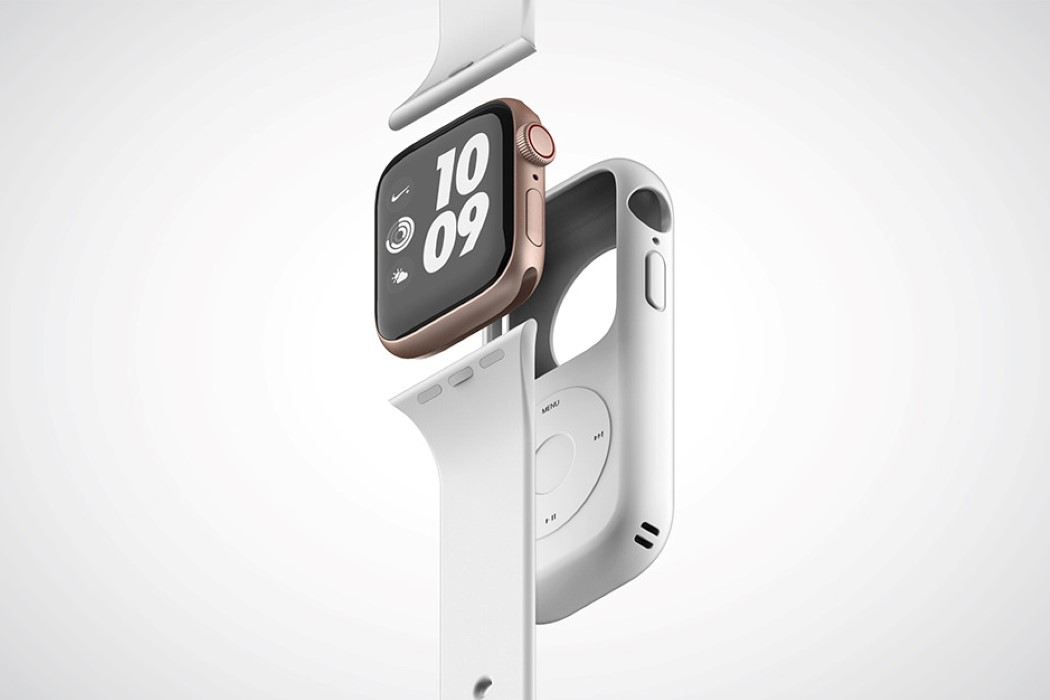 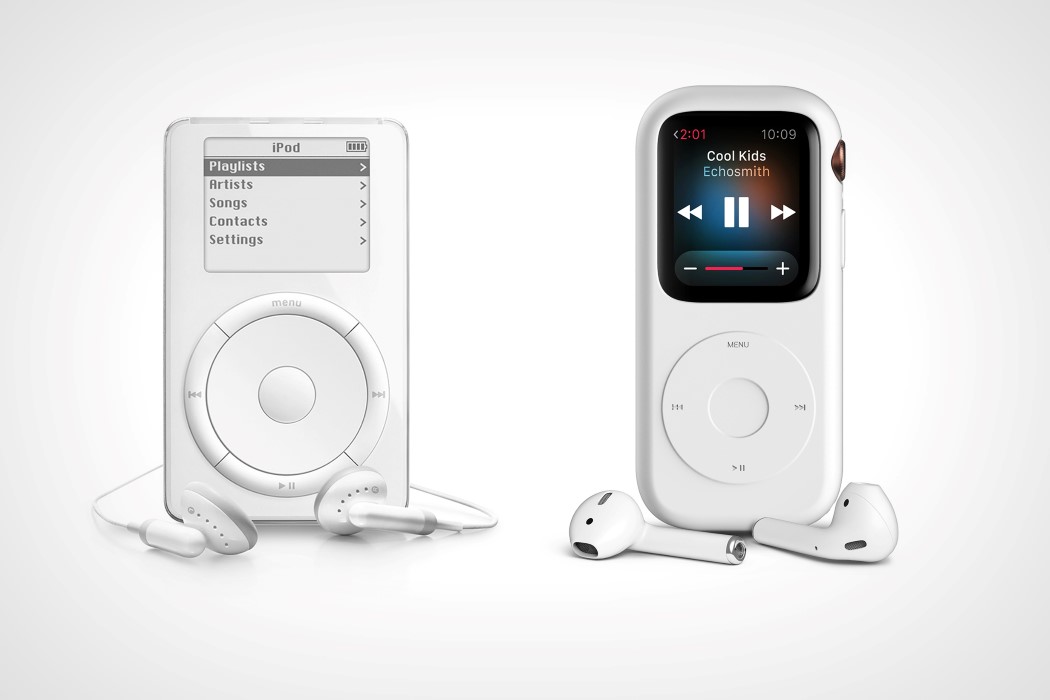 Joyce Kang and C.O Design Lab’s Pod Case gives the Apple Watch a much-needed history lesson, introducing it to the ancestor that started the Apple craze. The watch’s screen roughly matches the screen size found in classic iPod Nanos, while its body is only a slight bit thicker. The Pod Case, made in silicone, slides right over the Apple Watch body, giving it a funky throwback, while also letting you use the watch as-is.

The Magic Mouse Mini by Yongbin Kim looks and feels like your regular pop-socket. It attaches to the back of your phone, giving you a pop-out grip that you can firmly hold onto between your index and middle finger as you use your phone or click selfies. Switch the device on, and the optical sensor above the Apple logo powers on, turning your iPhone into a magic mouse! The iPhone and the socket at the back work in tandem to replicate the Magic Mouse experience. The optical sensor on the socket helps with cursor-tracking, while the iPhone’s touchscreen shoulders the responsibility of providing the control surface, allowing you to left-click, right-click, pinch, zoom, scroll, and do a variety of other gestures, just like you would on a Magic Mouse. 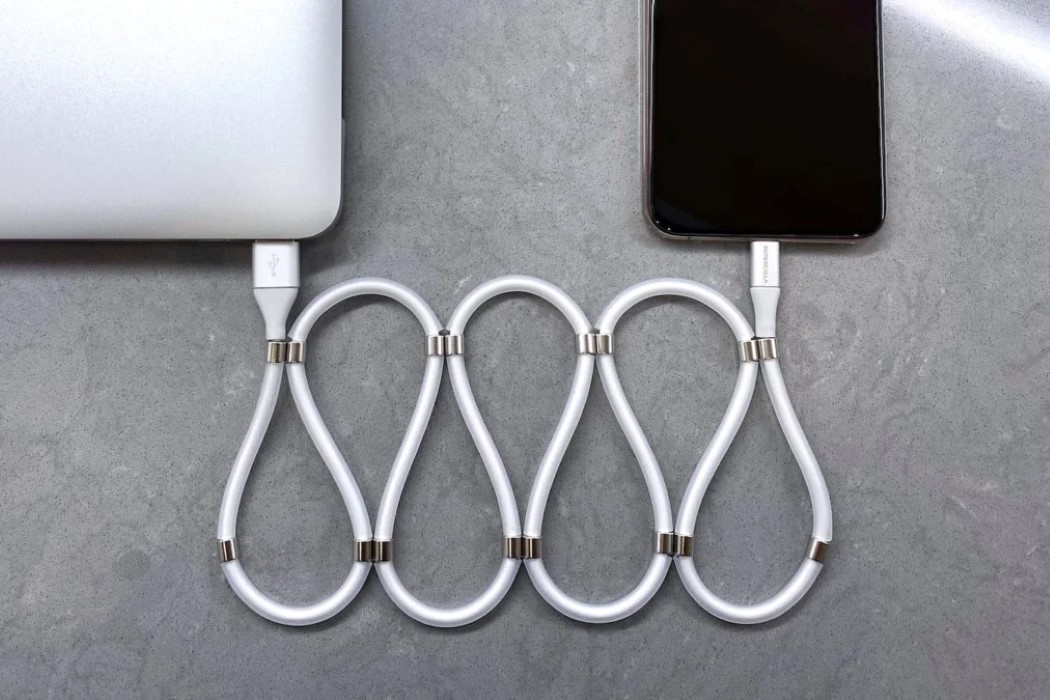 Of all the cable-managing solutions I’ve seen in the near 30 years of my existence, SuperCalla’s solution seems the most compelling. I’ve seen thick cables, flat cables, coiled cables, woven cables, and even cable-holders, but nothing is as convincing as the video above. Say hello to the SuperCalla charging cable. It looks like most cables, except for that at certain intervals the SuperCalla cable has magnets around it. These magnets effortlessly organize your cables and keep them organized, thanks to the satisfying snap of magnetic attraction. The magnets allow you to easily open the cable out, using as much as necessary, therefore keeping your drawer, bag, and general workplace as neat as possible. Besides, I imagine they’re incredibly fun to fidget with too! 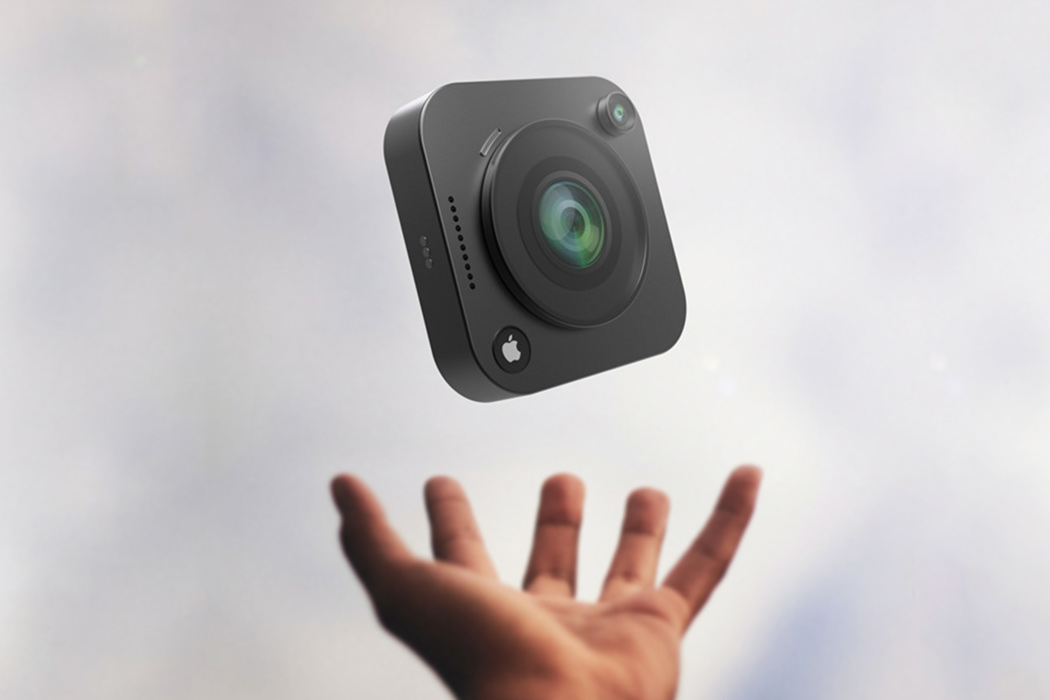 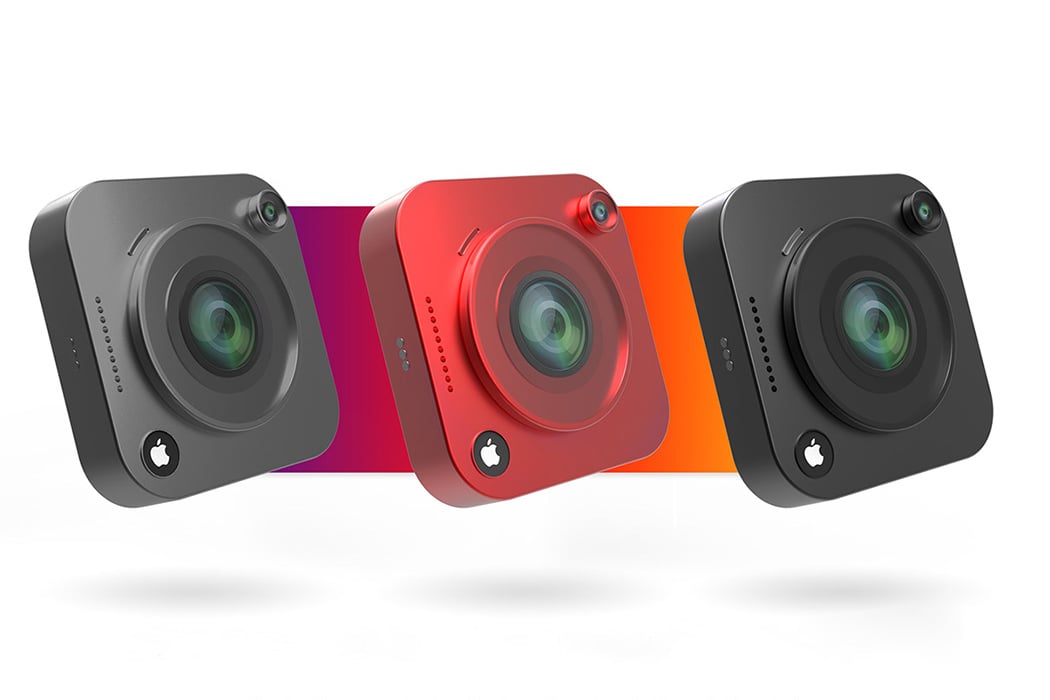 Apple’s modern aesthetics and attention to detail meet the rugged and agile nature of a GoPro, you know sparks will fly! Varun Anand’s conceptual design features the iCam as not just a camera but an interactive touchscreen – that lets you do everything from capturing photos and videos from angles never-seen-before to an iPod nano like design that plays your favorite tunes for the lighting to get just right. 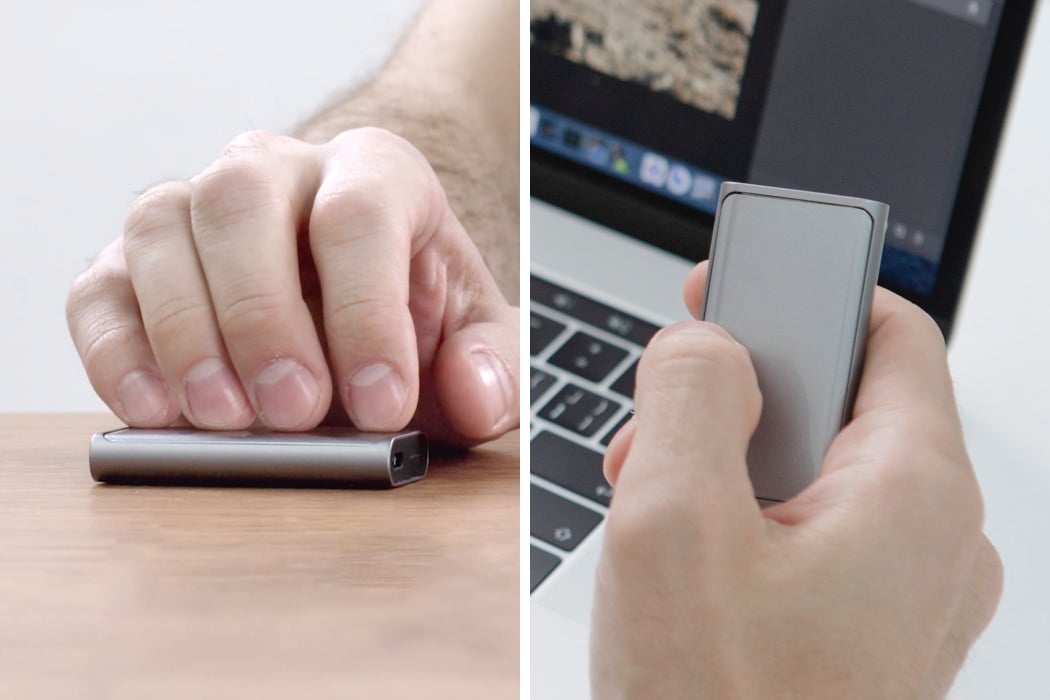 The CheerPod is a tiny, handheld device that boils the mouse down to its essentials. With a design that’s dictated by the need to be small and remote-like, the CheerPod is to mice what smartphones are to landlines – Portable, rectangular, and heavily feature-laden. It comes with an infrared sensor on its base, like all wireless mice, allowing you to drag your cursor by moving the physical device, but it also allows you to mimic gestures by swiping across screens in mobile and desktop interfaces. The CheerPod, unlike most wireless mice, works without a receiver, connecting directly to laptops, desktops, tablets, and even phones using Bluetooth. It sports a Magic Mouse-inspired touch-enabled surface on its top that lets you click, scroll, zoom, pinch, swipe, and even use multi-touch gestures… sort of like the love-child of a mouse and a trackpad. 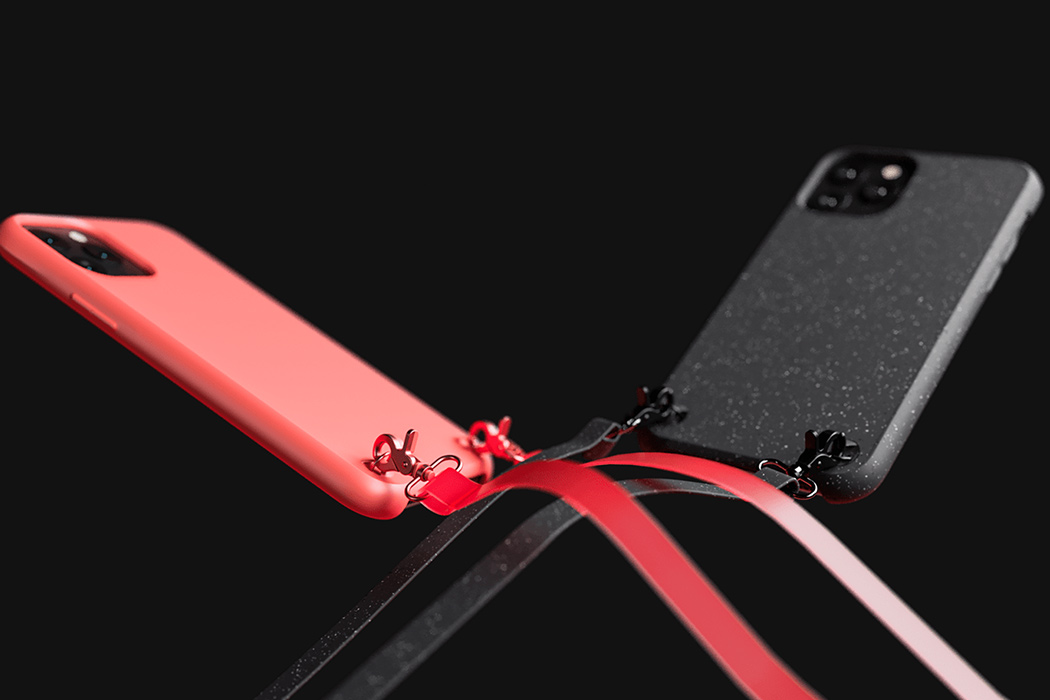 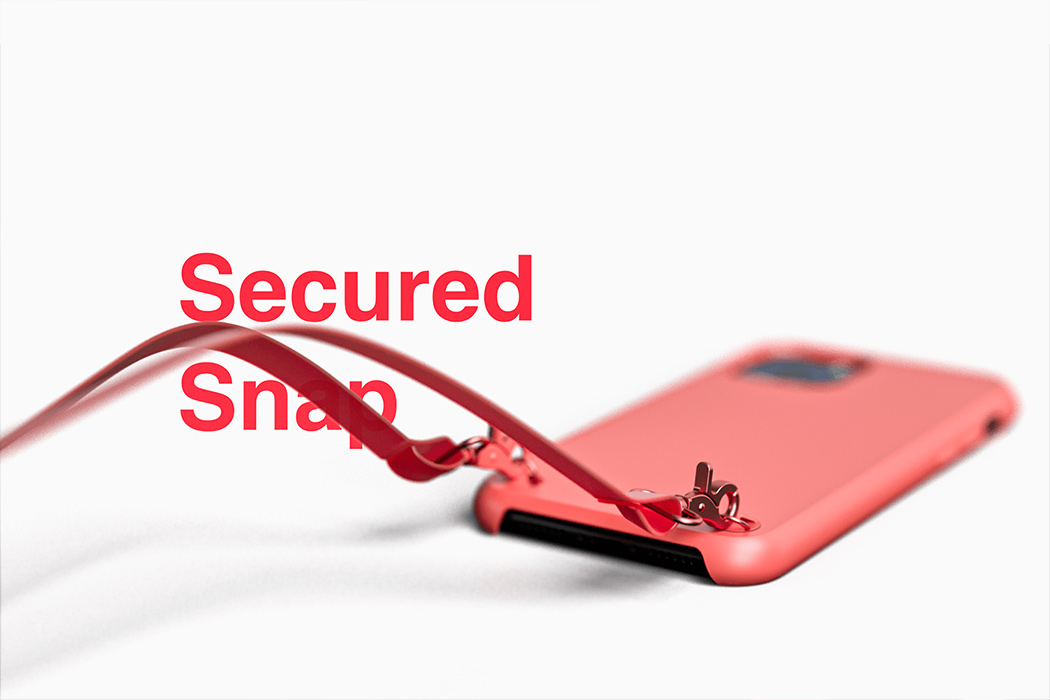 What is worse than blowing off your savings on your beloved phone? Losing that newly purchased smartphone due to a slip of fingers! That small but persistent fear is often niggling at the back of our minds and the Analogy Designs Necklace Case is the knight-in-a-shining-armor your smartphone needs! This design may seem simple but if someone loses their phone by it slipping into a grate, let’s see who is the one left laughing then! 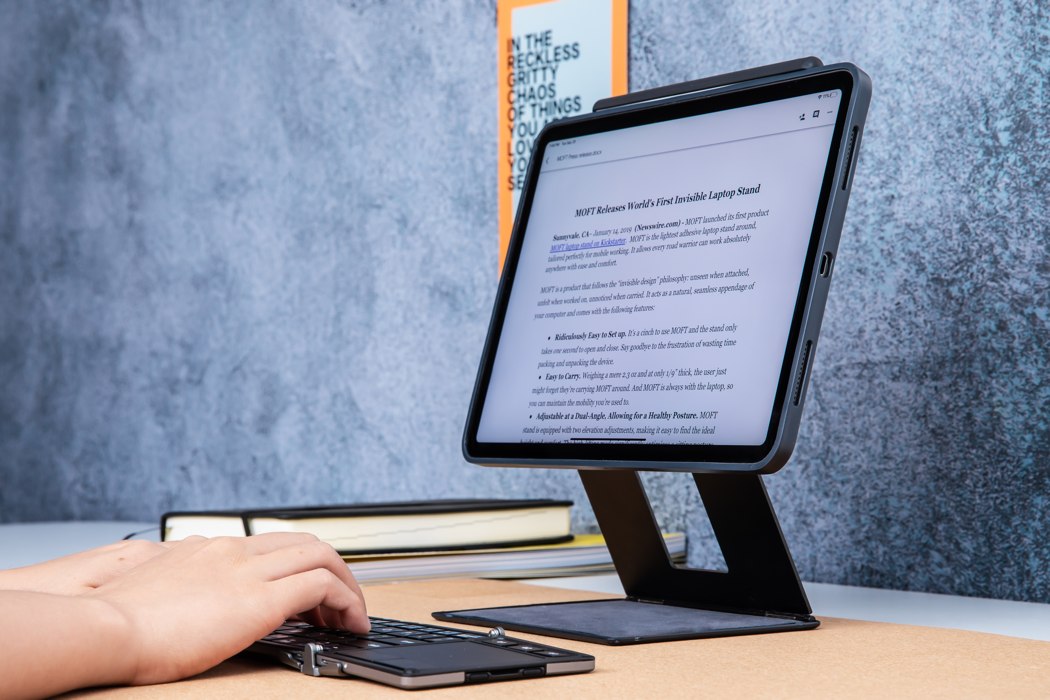 In its folded avatar, the MOFT Float looks and feels like any iPad Pro cover. It’s both rugged yet deceptively slim, and fits not one, but two friction hinges into its design, allowing you to open it out and pivot your tablet at any viewing angle as well as adjust the height to over 3-inches off the tabletop surface. The Float case comes with three modes of usage based on how you use the tablet. A Floating Mode gets the iPad elevated off a tabletop surface, perfect for longer, more natural viewing sessions like watching a movie, attending a zoom-call, or using the iPad as a makeshift laptop or a secondary screen for your primary computer. For more interactive usage, the Stable Mode puts your iPad directly on a tabletop surface, allowing you to tap/touch/draw on its screen frequently without having it rocking back or forth. Rotate the iPad 90° and it goes into Portrait Mode, giving you the freedom to use the iPad in its natural vertical orientation. 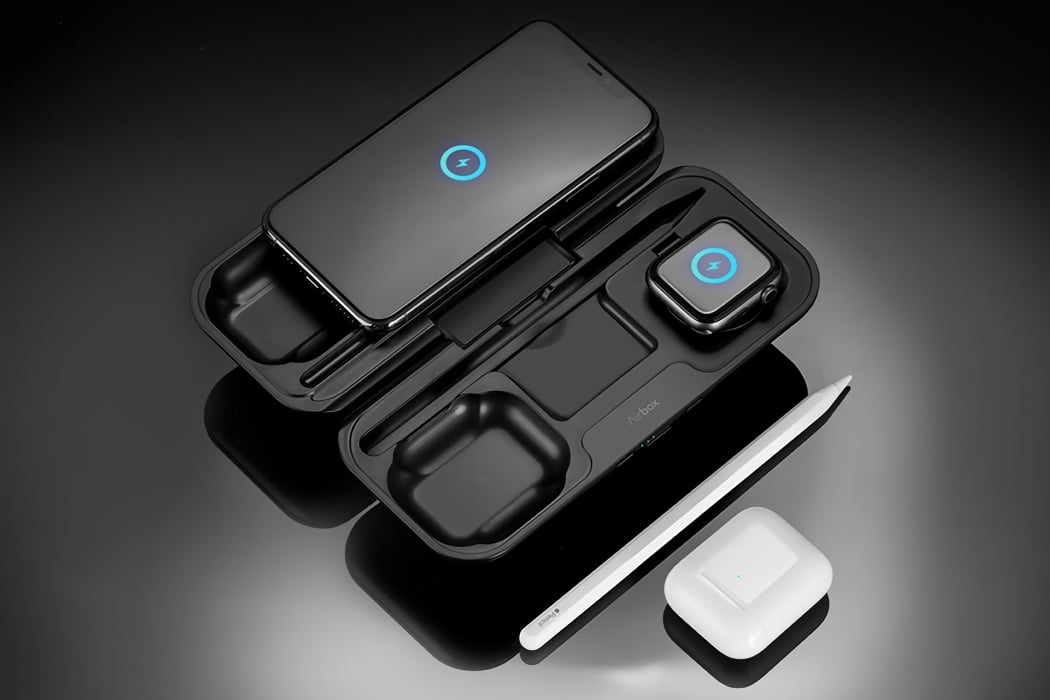 No larger than a spectacle-case, MOMAX Design’s Airbox is a slick white device made from the same glossy plastic as the AirPods case. Open it up and the magic inside reveals itself to you. Armed with dedicated areas to charge all your Apple devices (along with an MFi-certification), the Airbox has a neat zone for your AirPods case (compatible with both the AirPods 2 and the AirPods Pro), a fold-out charger for the Apple Watch, even a dedicated slot to store your Apple Pencil, and a large anti-slip zone just to charge your iPhone (or any other Qi-enabled smartphone). A USB-C port on the outside with 20W power-delivery even lets you connect your iPad to the Airbox, practically covering all of Apple’s portable products… while the 10,000 mAh battery inside the Airbox is more than enough to get you through 24 hours with all your products. It even allows the simultaneous charging of up to 4 products, so you’re never out of power. 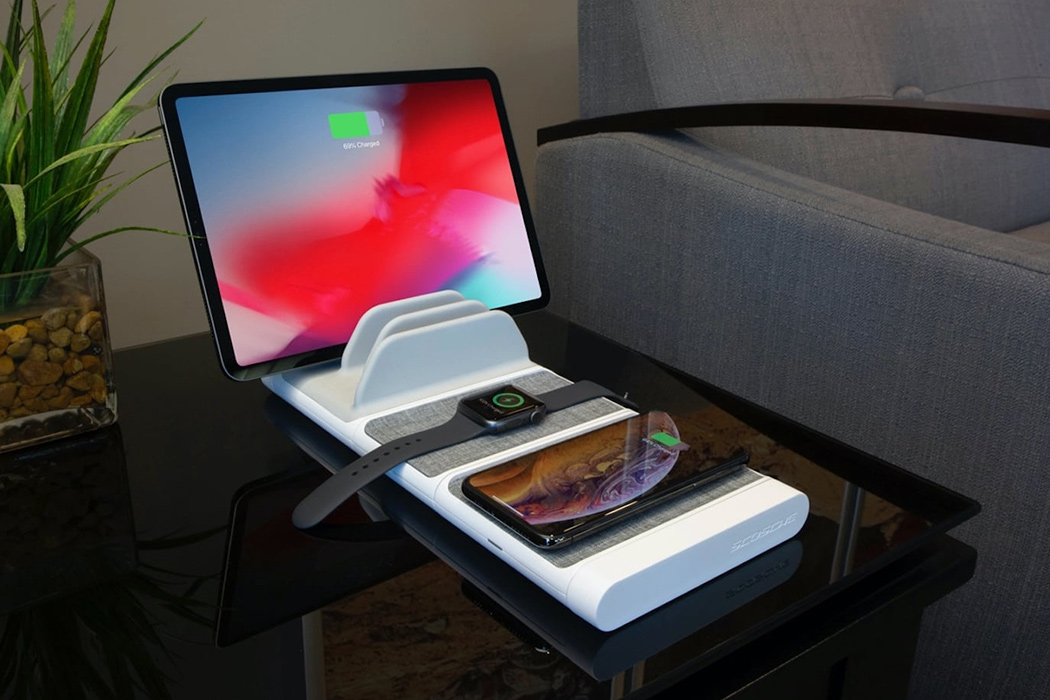 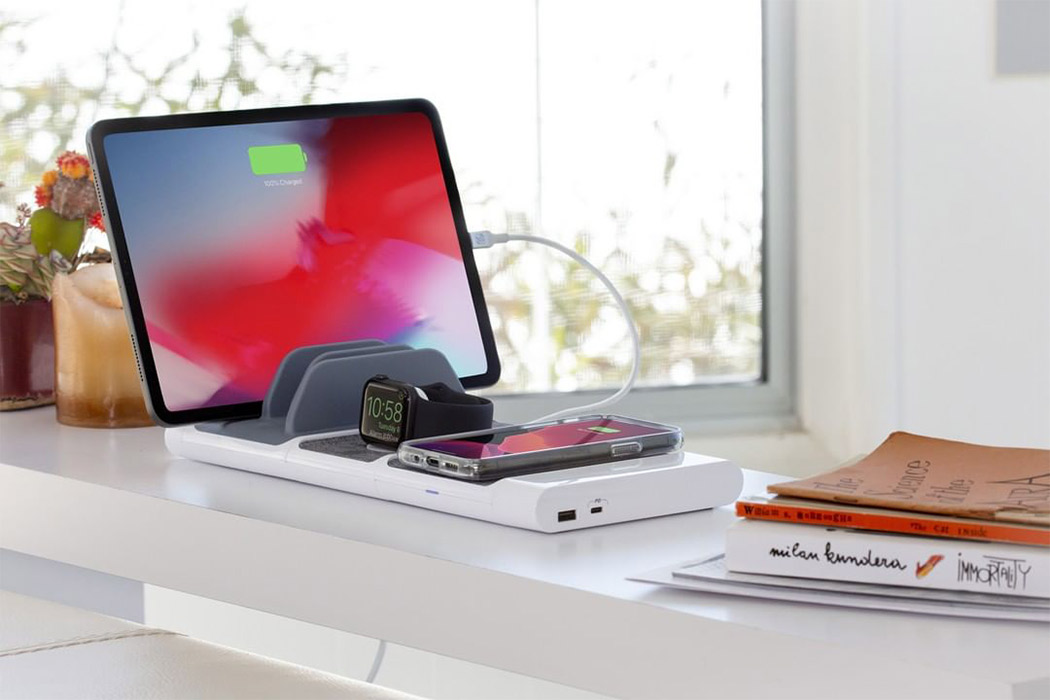 This wireless charging system kit by Scosche is modular and expandable, you are now free from hours of untangling cables for each device because this one dock is a home-for-all. You’ll be happy to know that it just requires one power out and given its modular nature, it is portable so you can use it at home or at work. The BaseLynx charging kit is compatible with all iPhones, iPads, Apple Watches, Airpods, and even iPods – yes this station EXISTS and all us Apple fans are excited about giving our devices a resting spot as sleek as they are. It has many individual parts that you can choose and pick from to BYOB (Build Your Own BaseLynx). An interesting feature is the Vert charging module where you can charge three devices at once on the same base. 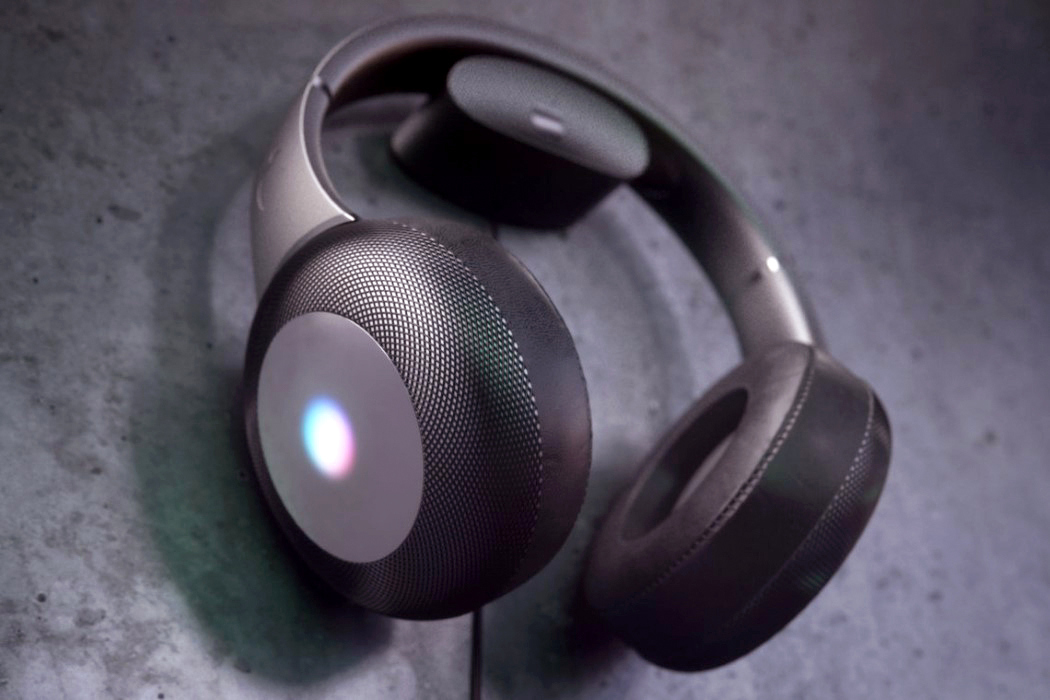 The designers at CURVED/Labs imagined what this bridge between the Airpods and the Homepod would look like. Taking very strong design cues from the Homepod, these smart headphones boast of large audio drivers that deliver spectacular sound, along with a touch-sensitive panel that lets you tap and swipe to access the headphone’s smart features. The headphones even pay tribute to the Homepod with the colored waveform-graphic found on the Homepod’s touch-panel and the faux-weave texture around it. I imagine the headphones also pack noise-canceling, as is expected with high-quality audio products, and from the looks of it, these concept headphones even come with a neat wireless charging dock/hanger. The Airpods do work with Android phones, so it’s safe to imagine that these headphones would too, but just like the Airpods, functionality would be extremely limited, and the touch panel wouldn’t be of much use.

How one company designed the ultimate camera bag for every photographer

Designing a camera bag can often be an extremely challenging task given the demanding and everchanging needs of photographers. Some travel with large lenses, others…

The Last Cart You Need

The Futura lighting by Hangar Design and Vistosi have an interesting aesthetic. Off the first glance, I’m reminded of Harman Kardon’s Aura speakers that created…

Saltgen Pepper (a twist on the Beatle’s Sgt. Pepper) is a tribute to the band that’s right at home in any modern kitchen. The playful…