Consider the Wulcano an innovative twist on a traditional style of cooking. Asians have been using stackable steamers made from bamboo to cook their food for practically centuries now… but what the Wulcano fundamentally does is takes that idea and tweaks it a bit, making it more modern, universal, and useful. With a stainless steel stackable container system, the Wulcano quite literally reinvents steam-cooking, allowing you to prepare multiple dishes at the same time, over the same flame. The Wulcano’s unique volcanic shape guides the steam upwards and around the container, allowing each dish to cook using redistributed heat, while helping retain the juices your food cooks in (because unlike steamers, the plates don’t have holes at the bottom). Not only does this save energy, it saves time too, and offers a healthy way to prep all kinds of food, from steaming dumplings to preparing rice, cooking potatoes and other vegetables, steaming meats before finishing them off on the grill, or even using this unique method to prepare desserts like custards, puddings, and cheesecakes. (Just don’t cook your meat and desserts at the same time)

The Wulcano set comes with four different elements that stack one upon another to create a layer-by-layer food preparation system. Made from stainless steel, the Wulcano works on gas, electric, ceramic, and induction stoves with ease, using a single stove to prepare multiple tiers of food. This fundamentally allows you to prepare different food at the same time, utilizing only one source of heat to cook multiple dishes, and allowing you to simultaneously prepare more than one course of food at a time. The lowest container holds the water (you can use stock too) that boils and turns into steam. The steam travels upwards, circulating between the different stacks, cooking all the food evenly and together. Steaming your food helps lock in its nutrients but also its flavors, unlike boiling, which quite literally dilutes everything. The steam circulates between the various layers, cooking everything evenly, and the juices from the food collect at the bottom of each plate, trapping all the nutrients and flavors in a delicious jus/gravy that you can use as a dressing! A useful tip would be to place the items with shorter cooking-times at the top, so you can remove the upper layers as the food inside gets cooked. The Wulcano’s design allows you to serve the food directly in them too, eliminating the need for a separate set of vessels just for serving food at the table. The modular structure allows you to stack as many components as you per your meal, after which, the individual parts can go right into the dishwasher for cleaning. Once you’re done washing, the Wulcano’s parts nest right within each other, occupying a fraction of its intended space for more efficient storage! 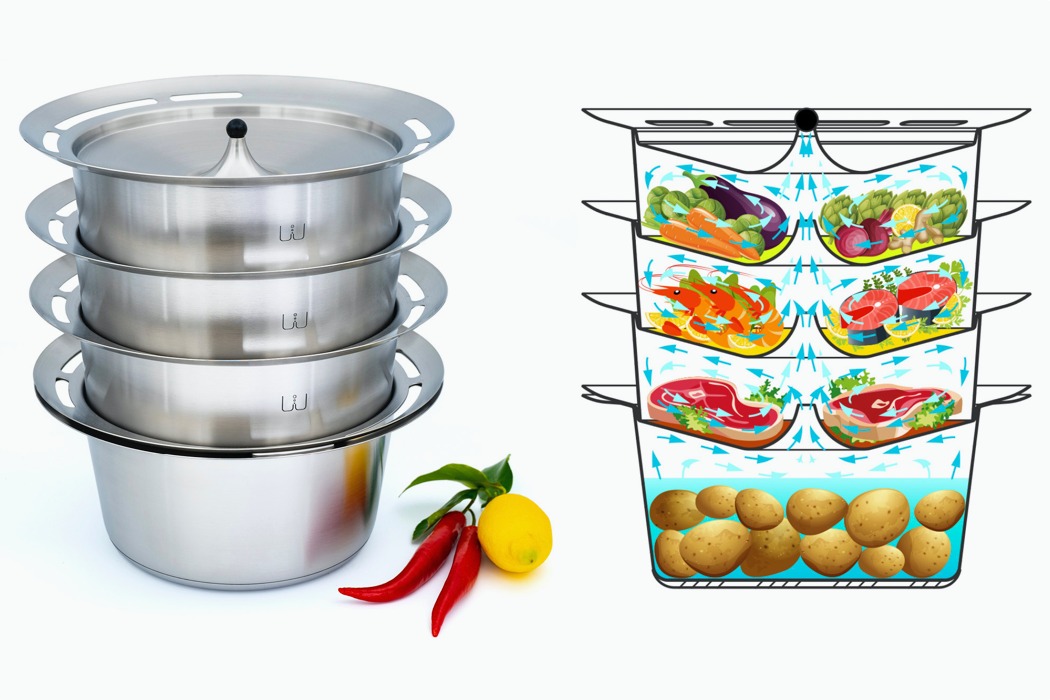 Wulcano – A New Way of Cooking with Steam

The space-saving Wulcano food steamer lets you cook up to four courses on a single hotplate, saving energy and our planet too.

Each layer in the Wulcano steam system is a separate component, which means all of the vitamins and minerals are preserved and the food keeps its original flavor. 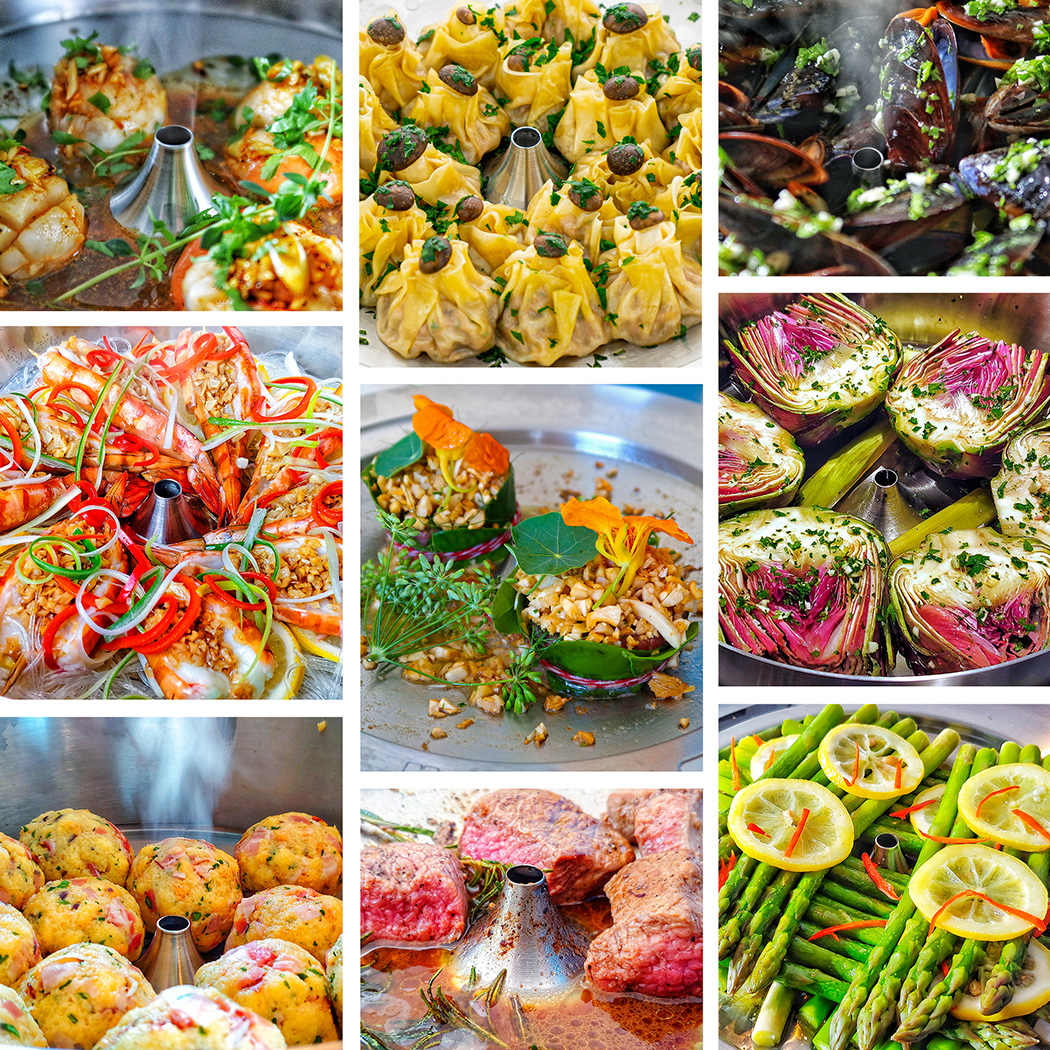 Specially made for everyday use and adapts to all of your needs. You will only need one hotplate to prepare the complete menu. Best of all: you can’t actually burn anything.

Made from only 4 elements, the individual elements of the steamer are also versatile. You can use the cooking pot on its own, the steaming layers as serving plates and the steaming ring for baking. 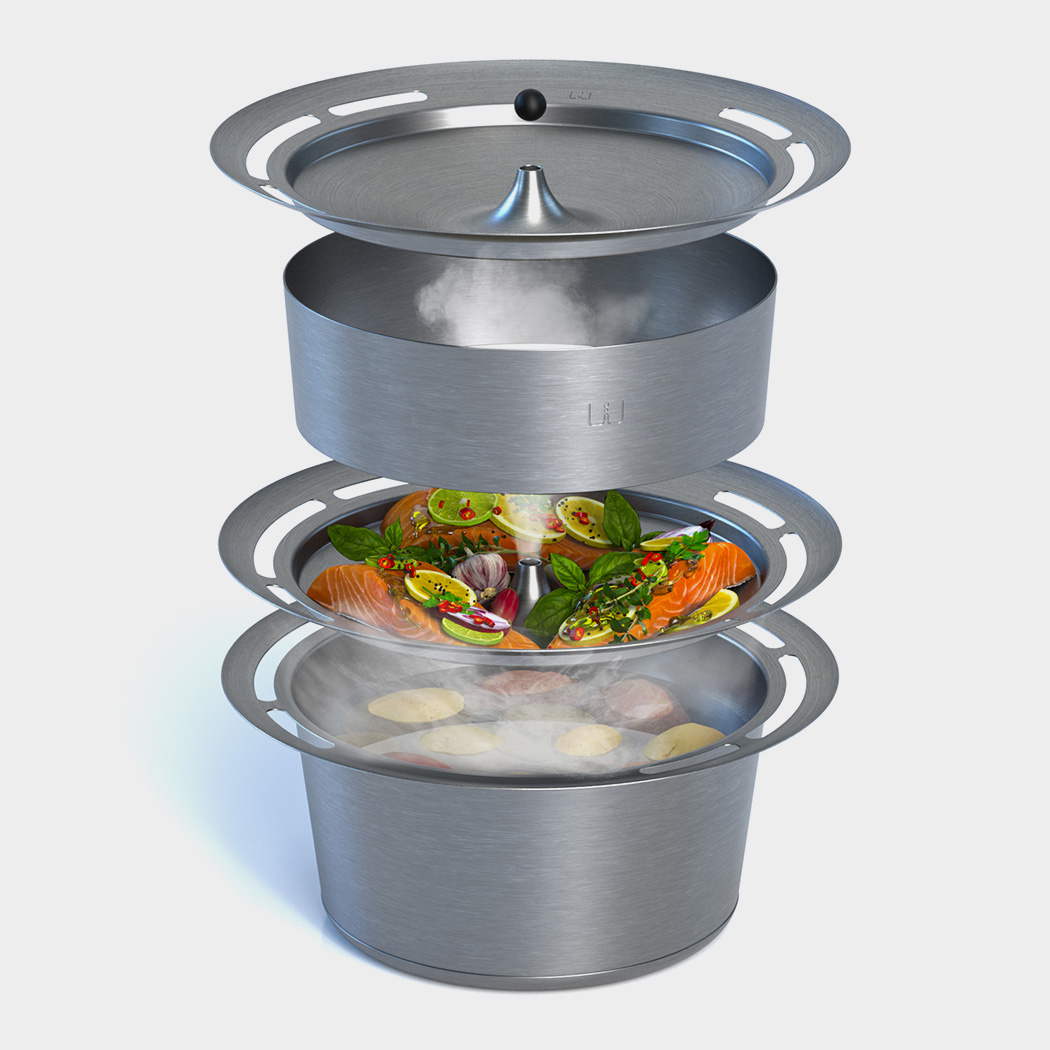 The stackable designer allows a variety of dishes to be streamed simultaneously. All flavors will be preserved on each tier.

With Wulcano you can prepare up to four dishes at the same time on just one hotplate. This saves energy and is good for the environment. 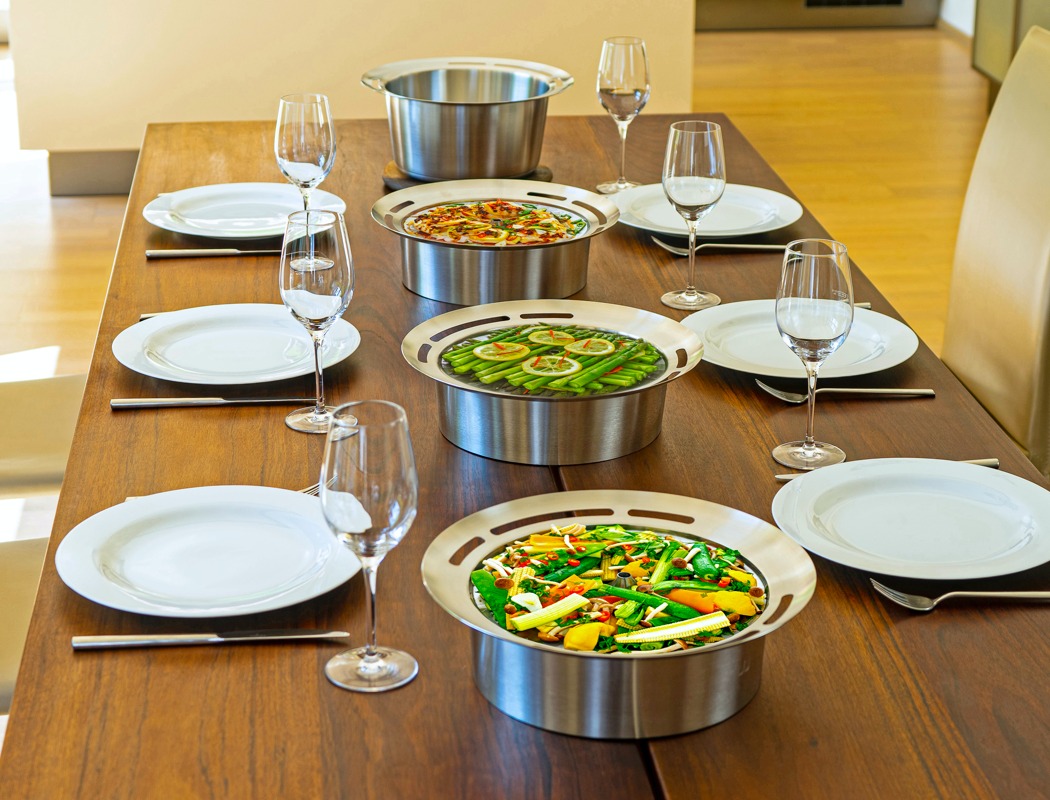 You can stylishly serve your cooking creations straight to the table. 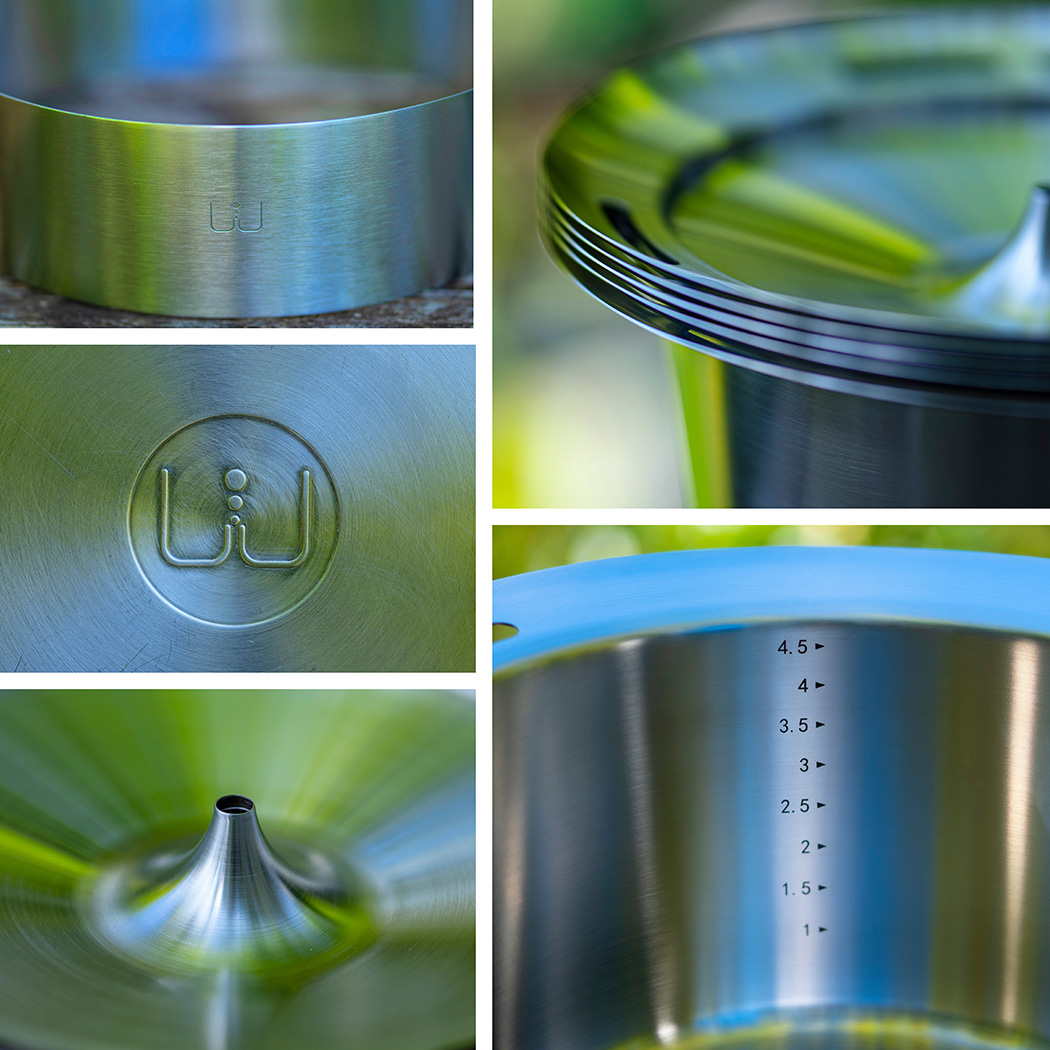 No plastic of any kind – including plastic-free packaging. This means your food remains intact from any synthetic substances when heated. 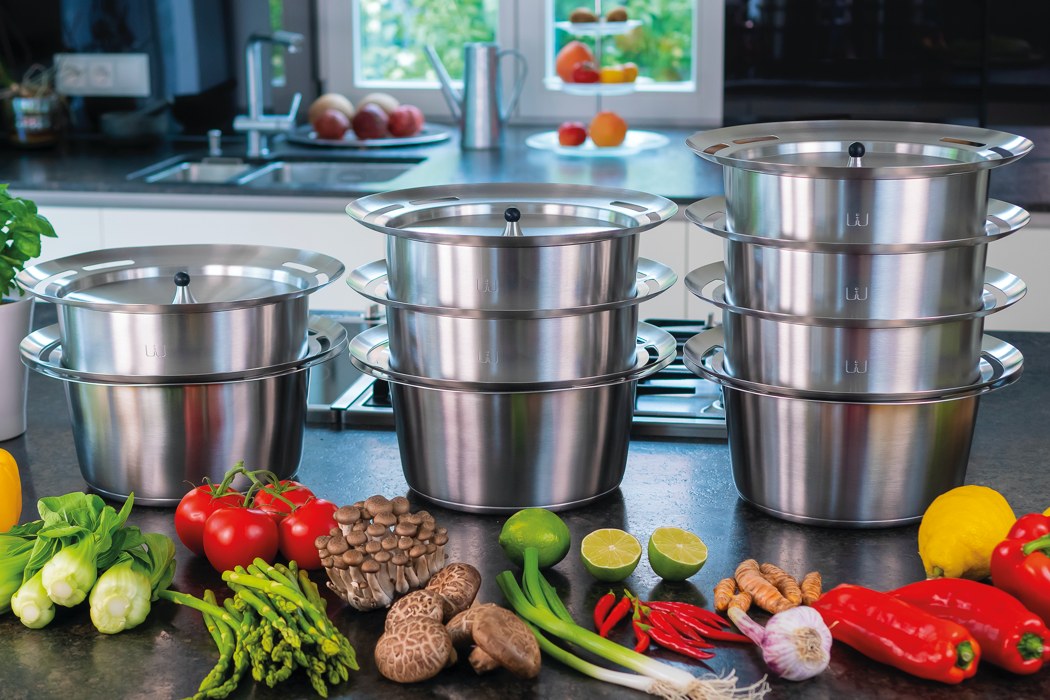 There are many drones on the market, but this might be the last one you need! The X-Drone features many of the top features that…

The Pop Star of Popcorn Makers

Pop 360 is one rockin’ popcorn maker… literally! Designer Ketaki Kshirsagar discovered that adding a swivel feature eliminated the need for a fan to mix…