Versatile, stylish yet sleek, scooters are often hailed as the solution to current traffic woes! Add to this the updated electric scooters and we have, literally, a solution to our energy problems. For scooters to be taken seriously as an alternative and planet-friendly mode of transport, they need to shine above their current status of high-tech toys and be seen as actual problem solvers. We bring you our curated collection of scooter designs that showcase powerful designs packaged as this humble two-wheeler that are sure to convert you to the two-wheeler sides!

Designed to look almost like the successor to BMW’s Concept Link from 2017, the e-scooter by Carota Design uses a similar CMF, but with leaner, lighter, and narrower forms. The matte-finish metal panels look distinctly like something from BMW’s playbook, while those orange accents around the windscreen give the e-scooter the pop of color it needs. The E-scooter’s front comes with paneling that conceals the rider’s legs, pretty emblematic of scooter designs, while the motor and battery seem to reside in the space in front of the rear wheel. Carota’s design features a cantilever seat that cuts down on the boot-storage but provides a loop on the left to secure your helmet in place. The seat naturally transforms into the E-scooters taillight, which forms a razor-thin arc that’s visible from the back as well as the sides. The headlights, on the other hand, are present in the form of edge-lit details on the front.

Mightyseed has created Vespa 98 – a conceptual electric scooter that fits with the needs of today’s world. Vespa is known to have kept it’s retro aesthetic while still being modern. “We believe looking back to history will give more insight into the future. The Vespa 98 electric concept version is a reincarnation of the original design. The concept is much more like a modern incarnation with sleek styling cues with streamlining features,” says the design team. This electric scooter showcases a bolder look compared to the original one with modern design details like the handles. The mudguard is still placed like it was in the original scooter but now it holds the LED headlight instead. One major difference is this single-seat scooter uses lidar sensors placed at the rear end to notify the rider instead of having rearview mirrors. 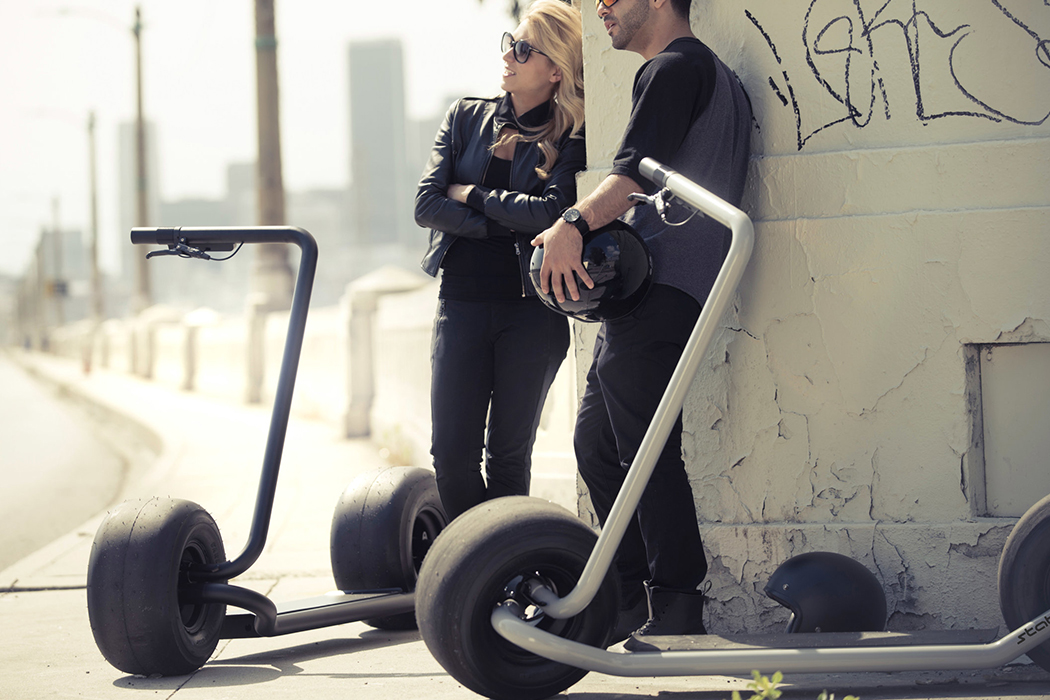 This is Stator, the self-balancing, fully electric, an absolute monster of a machine that you never knew you wanted, until now! Housed within Stator’s rear wheel is a Direct Drive 3 Phase Brush DC, which provides a max power of 1000W and is capable of propelling it down the road at speeds of up to 25mph! Stator’s bare-bone aesthetic expresses its designer’s, Nathan Allen’s, passion for both simple design and engineering; the motor, batteries, and inner-workings are hidden away out of sight, a single piece of tubing forms the handlebars where the inconspicuous control module is located and there is an absence of flashy, futuristic styling features. 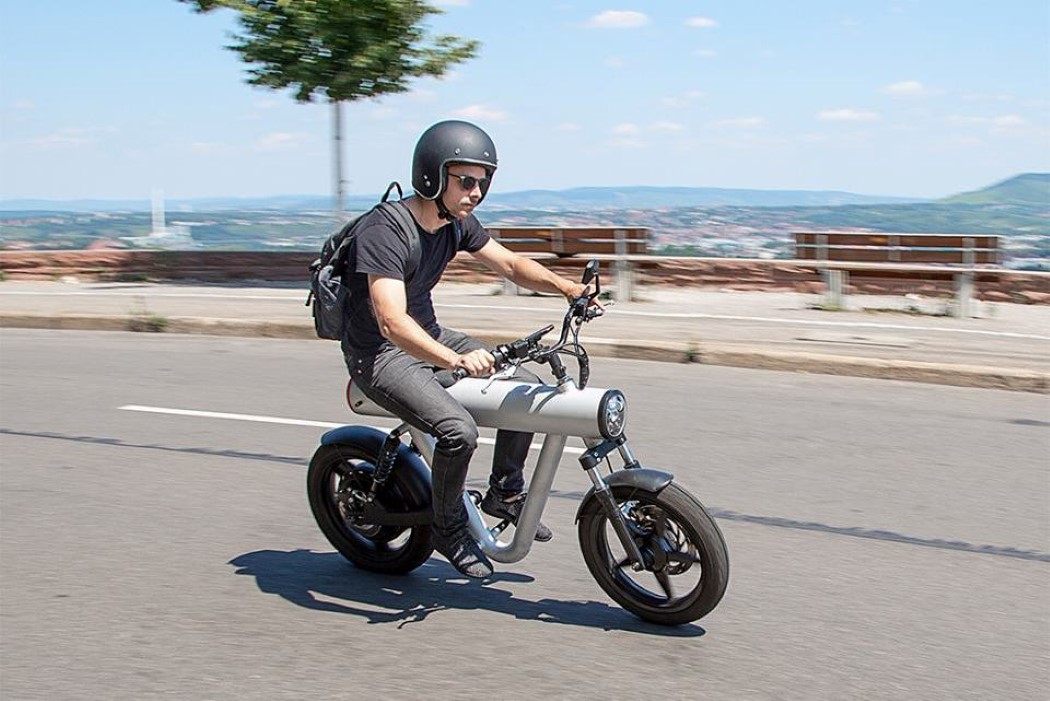 Housing every bit of electronics and machinery into its innovative inverted triangle shape, the Pocket Rocket doesn’t have the serious demeanor of a sports bike, but why should it, right? Designed by Manuel Messmer and engineered by SOL Motors, the Pocket Rocket is clean, compact, and well thought through. It hits that sweet spot between bicycles and motorbikes known as the e-bike aesthetic, and the minimal frame could just be iconic (I’m only a slight bit concerned about the base of the V being a little low, but on city roads, the Pocket Rocket should do fine). I’ve also grown to love the name Pocket Rocket, although it obviously has some suggestive connotations. 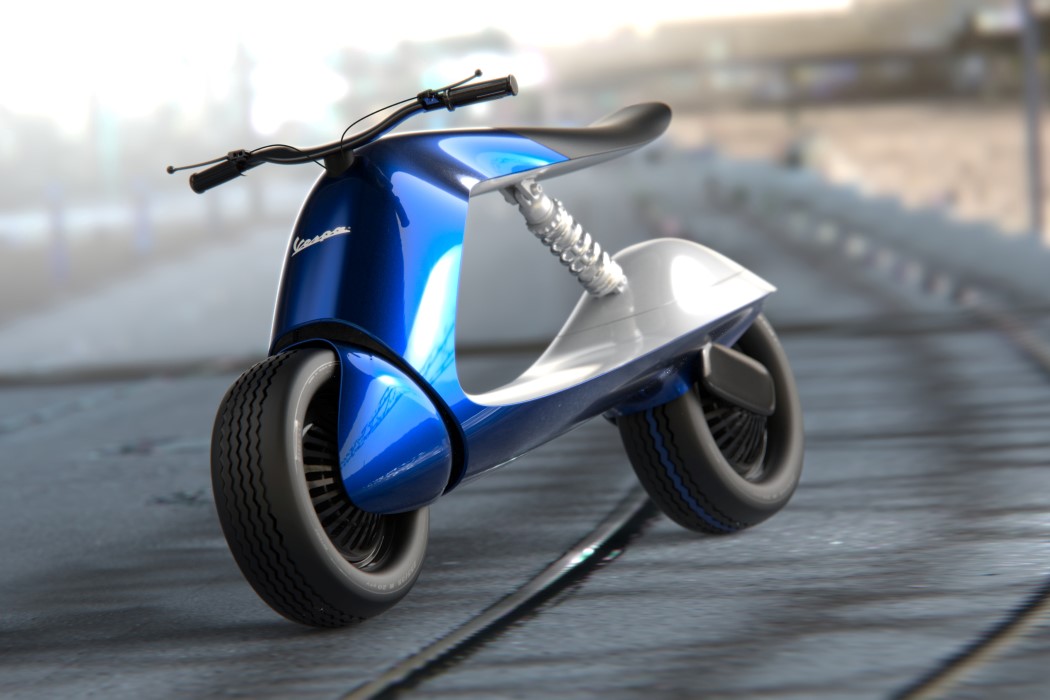 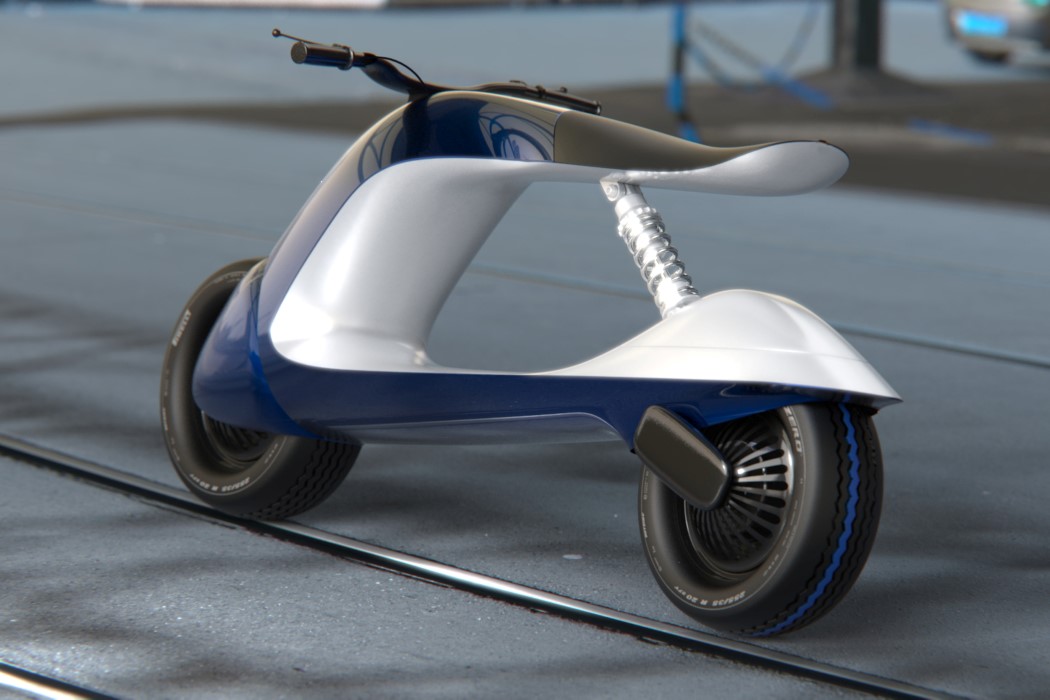 Artem Smirnov’s idea of the next-gen Vespa surely raises some eyebrows. It looks nothing like the Vespa we see on the road today, but in all fairness, cars today look nothing like they did in the 1920s, so it seems futile to really argue that the next-gen Vespa looks radically different. It, however, does capture a few elements that answer the questions I raised in my previous paragraph. The next-gen Vespa by Artem is clearly an e-scooter. Interestingly enough though, it comes in the format of an e-bike, but still retains that hollow leg-space that scooter designs are famous for – with a rear suspension capping it off. The seat, for the most part, is cantilever, resting directly on the suspension at the back, while the Vespa logo on the front plays a double role of branding as well as being the vehicle’s headlight.

Carota’s Classic E-bike is an experiment in form, bringing a lean design to a series of bikes that are not known for their leanness. Look at the e-bike in its side view and you notice its similarities to a low-riding cruiser. The curved fuel-tank, the seat’s proximity to the rear-wheel, and an elongated silhouette, all take on a Harley Davidson-esque appearance that’s often synonymous with a loud engine that makes its presence felt… but that’s where the Classic E-bike chooses to be different. It opts for a more silent electric drivetrain, a V-twin that sits right below the seat, powered by a battery that resides within the fuel-tank form factor. 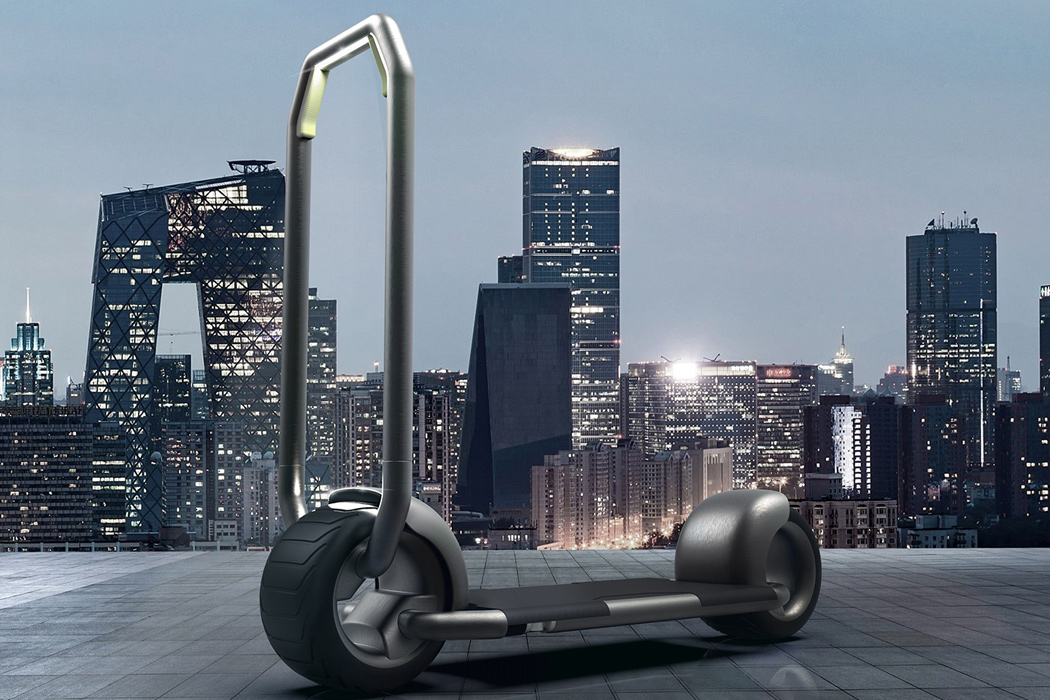 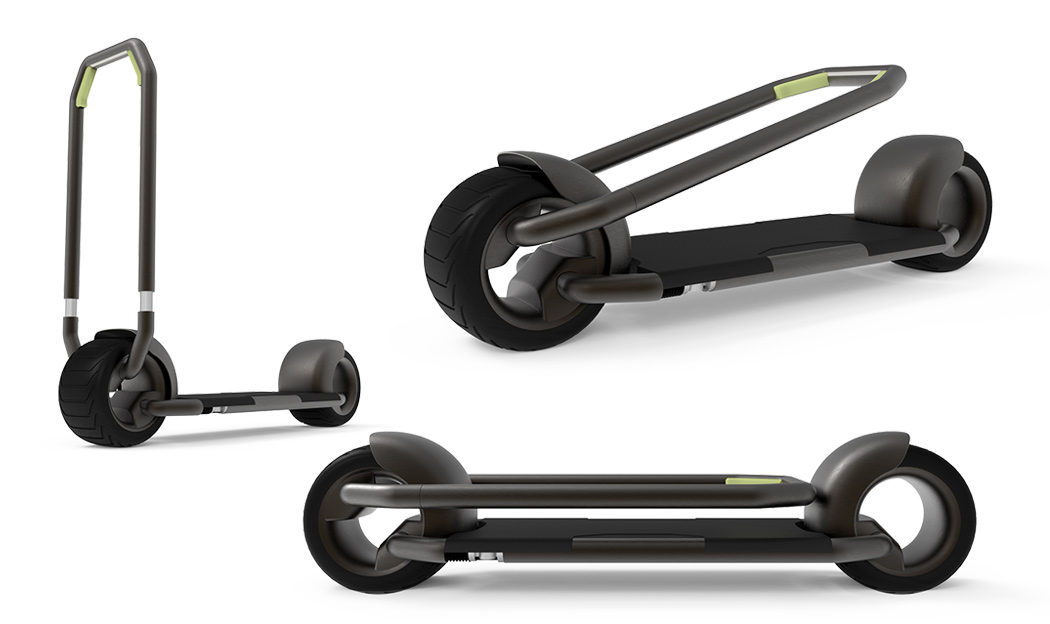 There could be a world where everyone will be zipping by on their little electric vehicles. Upholding such a vision in mind, and to meet the needs of such a world, Ekaterina Tiholova designed her version of an electric scooter, and to be honest…it looks like a flat-packed one! Tiholova’s scooter features a plain black base supported by two bulbous wheels. Its metallic grey and matte black looks are eye-catching, with a flash of lime yellow where you hold onto the handle, sealing the deal. The intricately treaded front wheel leads up to a quadrilateral-shaped handle, the scooter’s most unique feature! 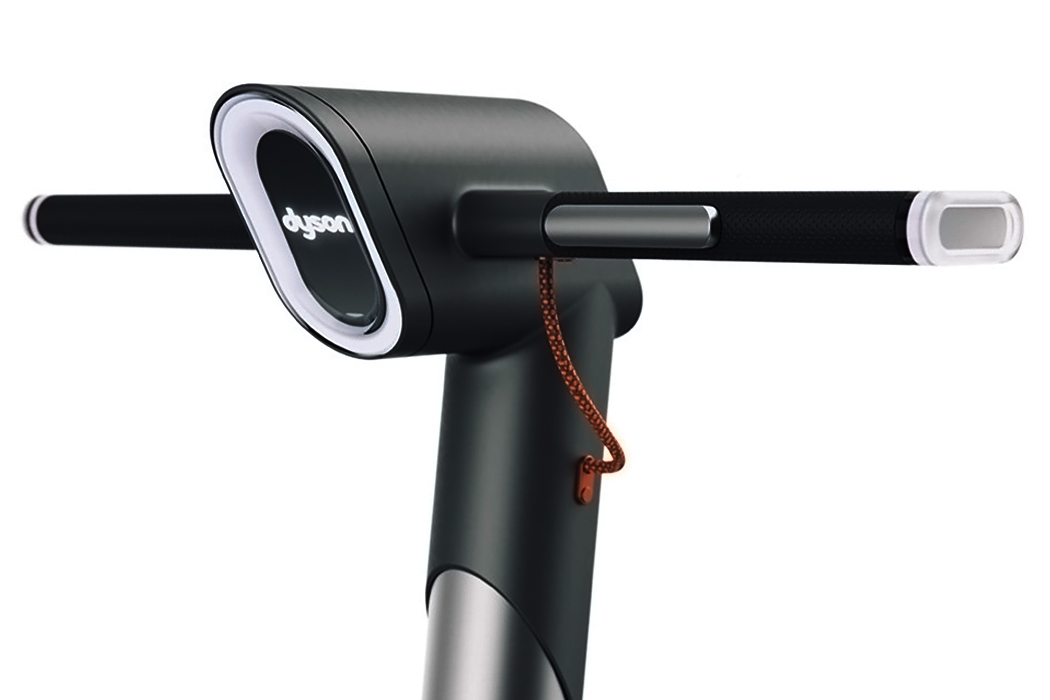 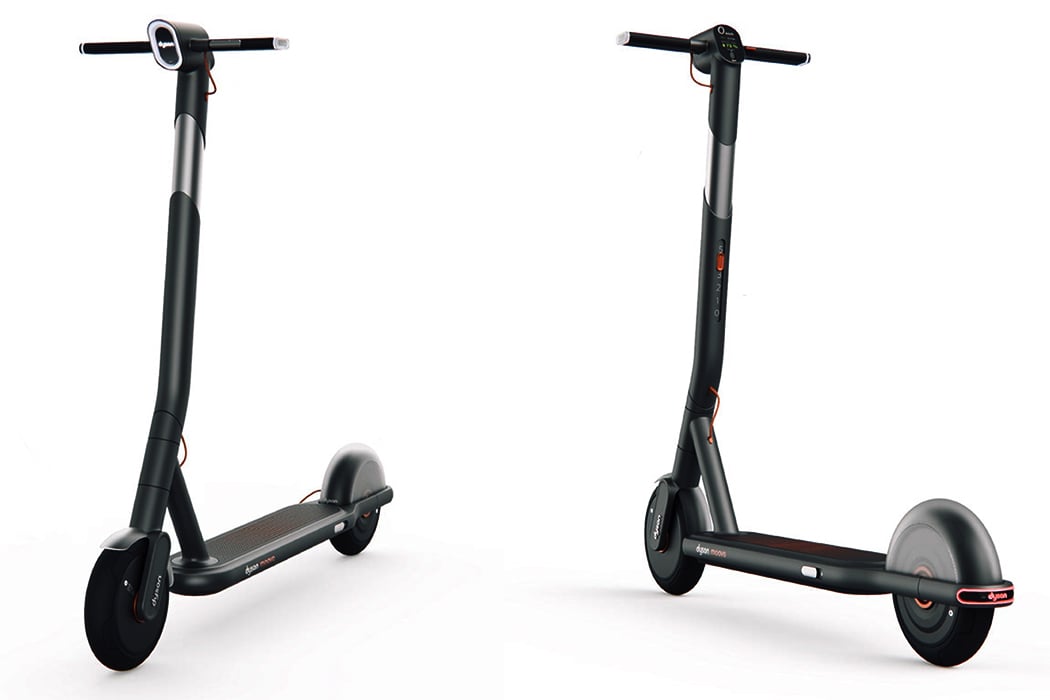 Dyson has inspired many designers to adapt their style and create some amazing concepts, our recent favorite is the  Dyson Moovo – an electric scooter modeled after their signature product designs featuring clean lines. Electric scooters are soon going to become a preferred mode of transport for city commuters as they are environmentally friendly and easier on the pocket than a Tesla. Moovo’s design incorporates Dyson’s sleek and simplified aesthetics with their powerful engineering into an efficient electric scooter that you would be proud to own. The handlebar integrates the workings of a CPU that lets you control certain features of the scooter through its display like folding the handlebar or visualizing your trip’s data. The screen is anti-reflective so that you can look at the data under any light condition when outside. 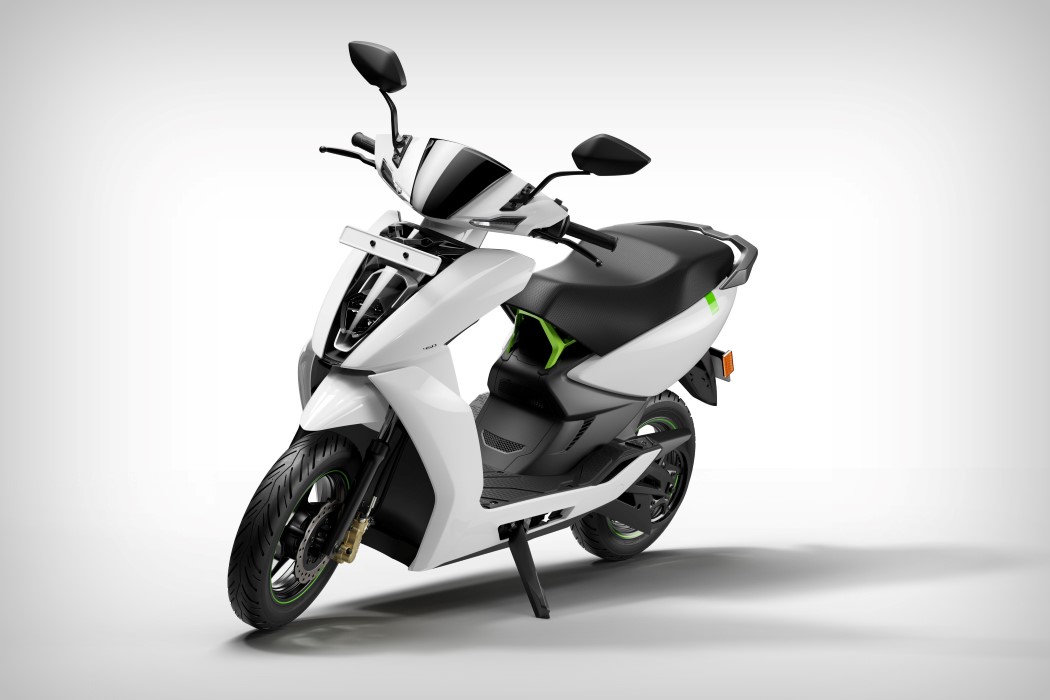 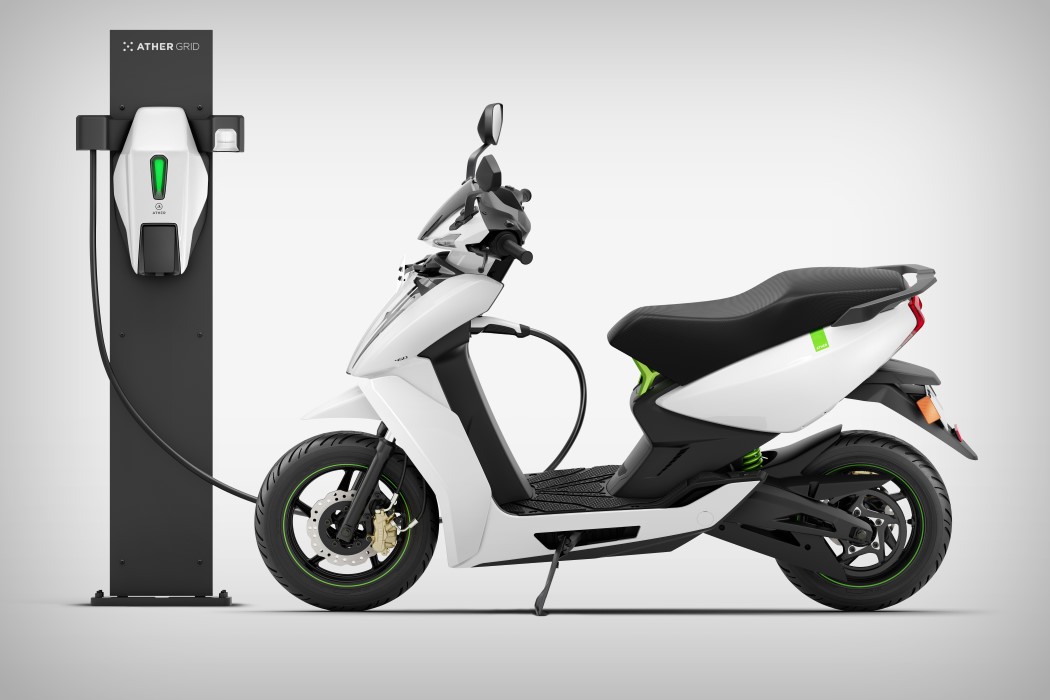 Starting with the launch of the AtherGrid a series of 30 charging points strategically placed across Bengaluru, India, Ather aims at getting its system ready before its product… the Ather 450 electric scooter. With a top speed of 80km/h, an acceleration of 0-40 in 3.9 seconds, and a range of 75kms, the Ather 450 is India’s first smart electric scooter. With an edgy visual characteristic, a storm-trooper color combination (plus some delightful green accents), the Ather 450 definitely looks the part of an intelligent electric two-wheeler. It sports a 7″ touchscreen dashboard that allows onboard navigation with options of alternative routes and saved locations. It also comes with the Ather app that enables push navigation from one’s phone to the vehicle dashboard, remote monitoring of vehicle health, and charge monitoring. Furthermore, with the over-the-air (OTA) updates, the Ather 450 is capable of improving over time with continuous updates and the addition of new features and functionalities. 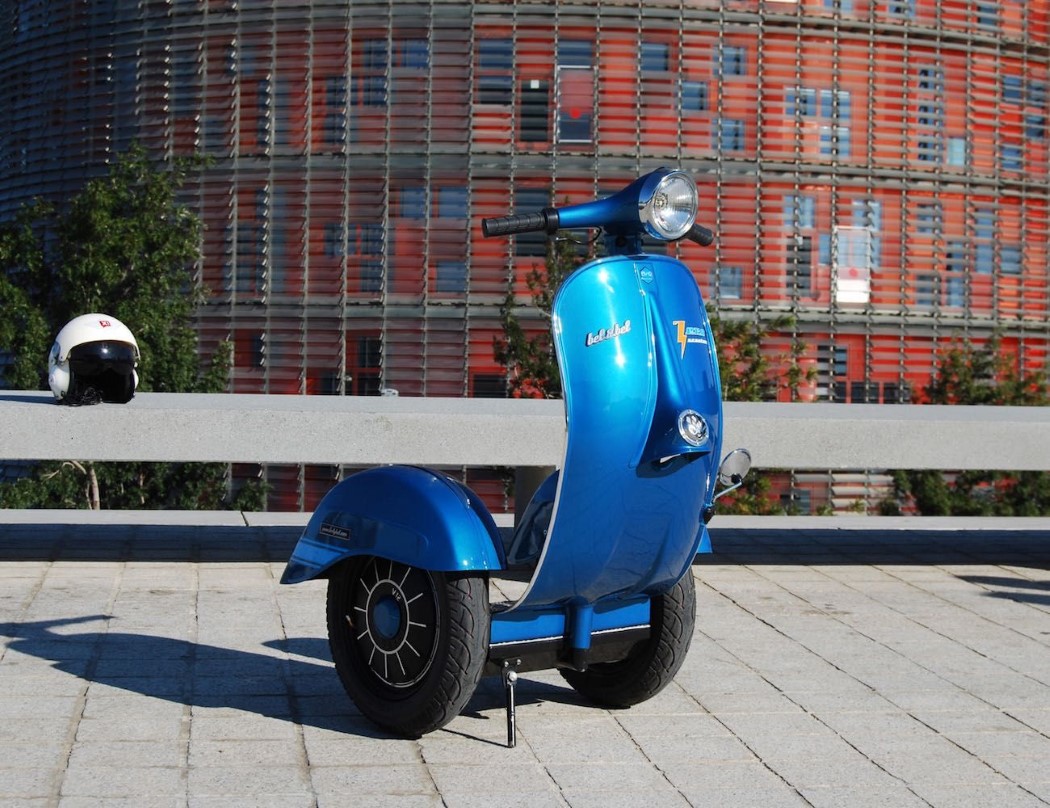 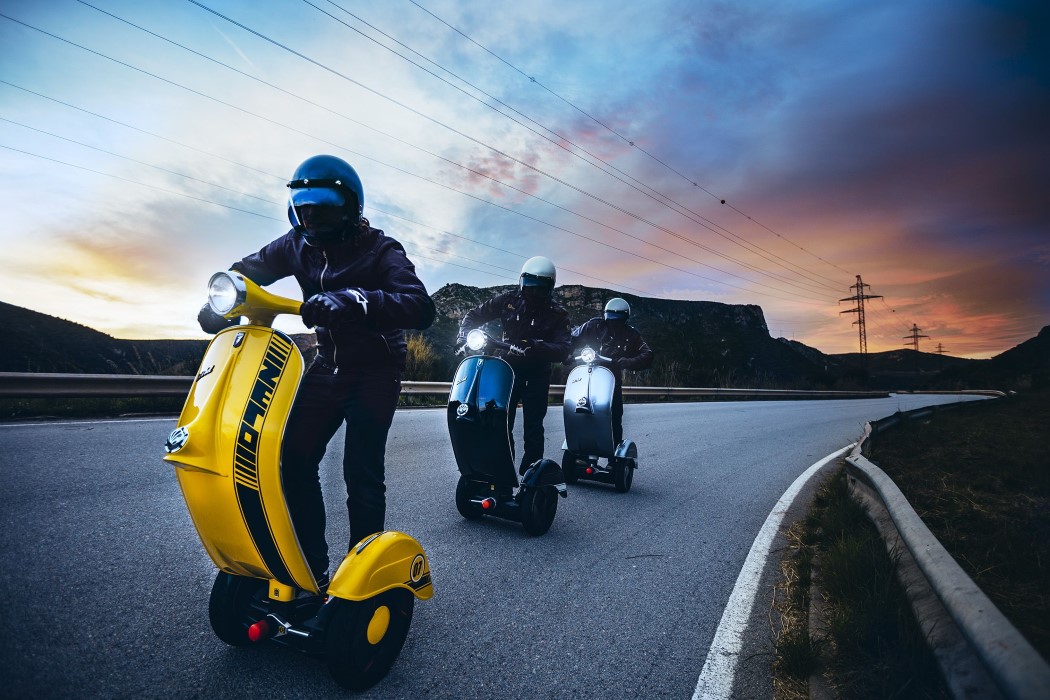 Made for recreational riding, the scooter/segway hybrid named Z-Scooter is fun looking vehicle that can run at recommended speeds of 20km/h for as long as 35km on a single charge. Inspired by the works of Corradino D’Ascanio, the pioneer of scooters (and the man who helped Piaggio build the iconic Vespa), the Z-Scooter is a hat-tip to the evergreen scooter aesthetic. It comes with an auto-balance feature like most segways, and even sports a quirky stand on the front for resting the vehicle. Lean forward and backward to accelerate and decelerate, and turn the handles sideways to maneuver the Z-Scooter left and right, and that’s pretty much all the controls you’ll need to operate the EV.

Recoiling Socket In The Wall

Rambler Socket maybe the solution most of us are looking for as far as extension cords are concerned. I mean if you hit “Extension Cord”…

Pininfarina co-created high-end simulators to relive the rush of racing in the era of classic cars!

Flashback in time and the nostalgia of classic Formula-1 cars racing down the straights, makes you want to time travel that era. Sure, modern driving…

Ever run out of room on your stovetop while cooking? If so, that’s probably due to the narrow spacing on a conventional induction stove. The…