It’s a wireless charger, but it’s better than a wireless charger. Cell by Ampere works as a dock as well as a UV sterilization chamber for your belongings. It’s a weirdly relevant combination of features but believe you me, Cell does a great job of being multifunctional but still being sensible. Every feature and use-case is well thought out, making it just the most conveniently handy accessory to have on you. Here, let me explain.

It’s no secret that your glossy, shiny, expensive smartphone is one of the most germ-filled things currently in your pocket. It’s also no secret that your phone is one of the most useful gadgets you’ve got on your person, so that’s really a conflict of interest, isn’t it? Cell by Ampere comes with a collapsible design that houses 2 wireless charging coils on the top, and UV-C LEDs on the base. Place your phone on top, and it fast-charges without wires, however, collapse the silicon rim around the sides and the base becomes a UV chamber, allowing you to sterilize your phone, watch, earphones, keys, or any EDC in mere minutes. Designed to be handy, Cell can be used as a UV wand too, allowing you to sterilize larger areas (like your door-handles, keyboards, food delivery parcels) by just waving the UV light over them. One could argue that being germ-free is just as much of a benefit as a fully charged smartphone, and the Cell’s 2-in-1 nature helps cover both those areas.

Things get really interesting when you realize that there’s more to Cell’s functionality. Its foldable silicone design can be half-expanded at an angle too, allowing your charger to effectively become a dock that works in landscape as well as portrait mode. Designed to allow you to use your phone while it’s getting juiced, the wireless charging surface comes with an anti-friction layer that holds your phone securely in place, and stops charging if your phone loses alignment. A USB-C output on the side of the Cell lets you even further connect a secondary charger for your smartwatch, and the collapsible design makes this entire world of functionality just as slim and portable as your phone itself. Plus, the cherry on the cake? Cell’s own wire and adapter are made from anti-microbial materials too, so your belongings are always clean… but don’t take my word for it! Just ask the guys at Business Insider, Digital Trends, and CES who called the Cell the best smartphone accessory of 2020! 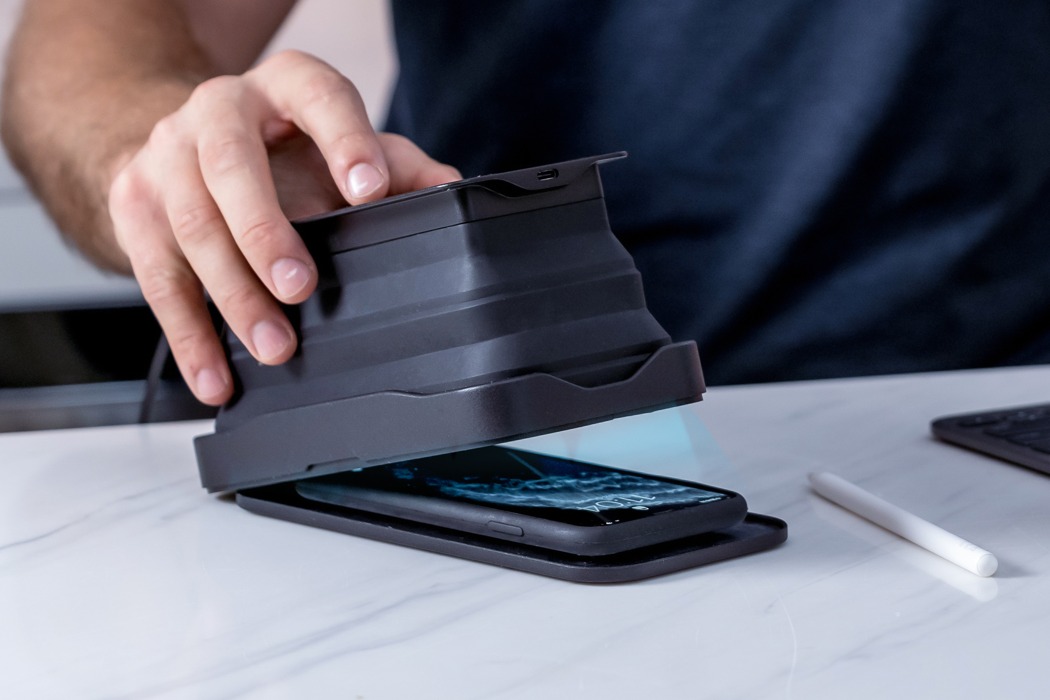 The Cell removes 99.9% of germs in 60 seconds with 4 UVC LEDs while powering your electronics with 2 powerful 15W wireless charging coils.

The average smartphone is 10X dirtier than a toilet seat.

Cell’s UV-C LED lights remove 99.9% of germs at the DNA level. Easily adjust the height based on what you’re cleaning. 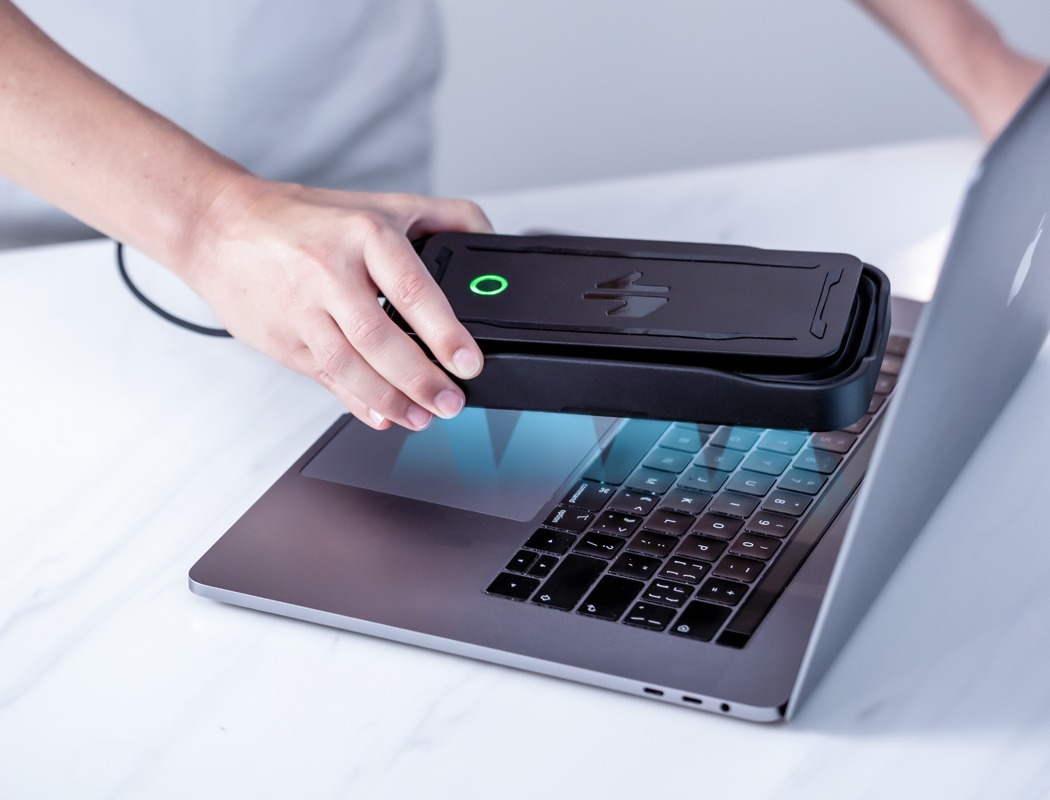 Utilizes 4 powerful 273 nm LEDs and has a sanitizing area of 1L. 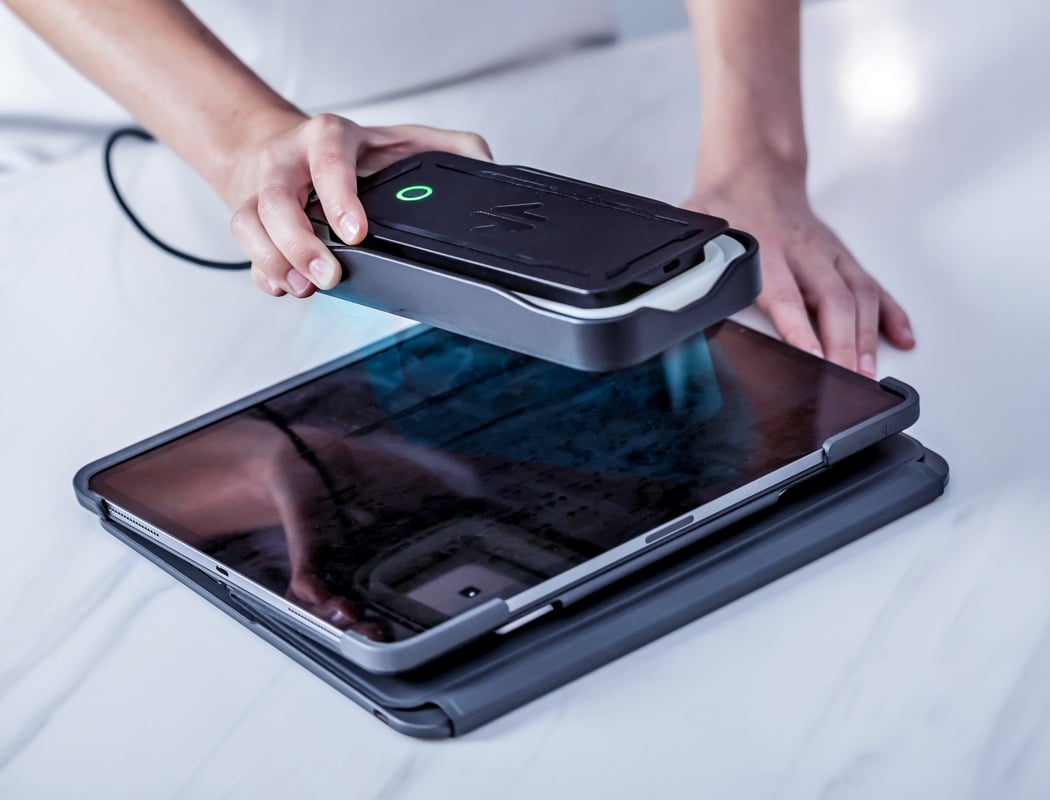 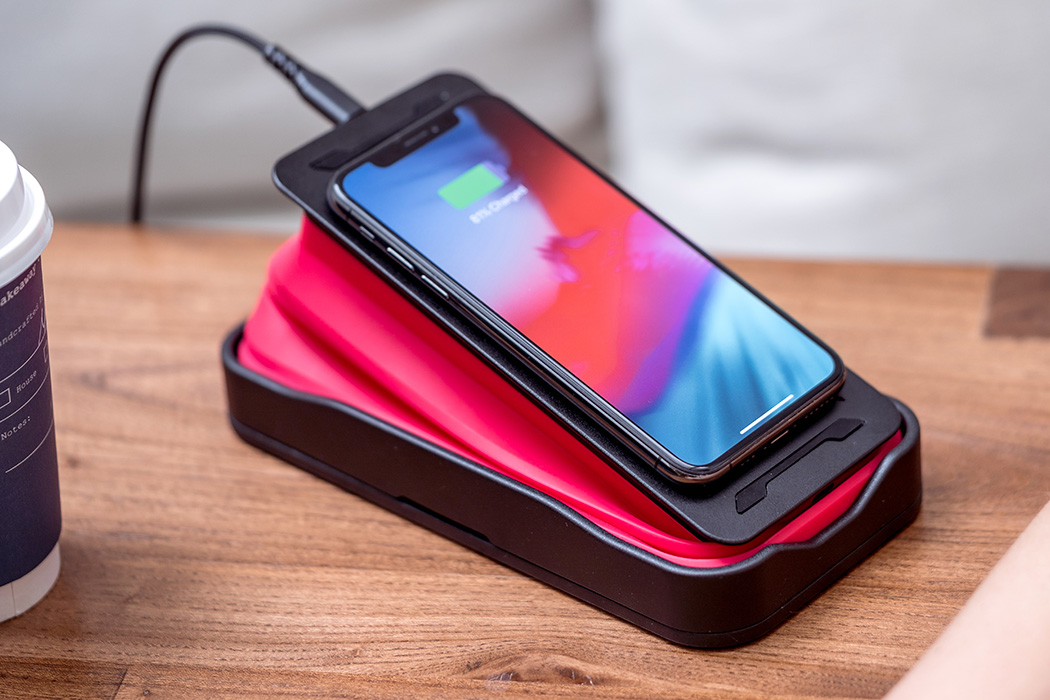 Cell leverages their award-winning wireless charging technology — the same technology that Digital Trends and Business Insider dubbed the Best of 2020.

The designers have increased the size of our two coils to create a larger charging zone, allowing for easier placement of your device to wirelessly charge.

A second USB-C output port will wire-charge a second device. Works perfectly with their own MFi Apple Watch travel dongle.

You can use Cell in multiple ways thanks to the flexible silicone slides.

Horizontal for Netflix and Vertical for FaceTime Calls.

Loving this simple coffee table called 1×3. Three wood beams and a 10mm think tempered glass top are all you need. The wood beams are notched…

Virtual Reality brings gamers right into the world of video games in a way no other gaming technology can. With VR headsets and controllers only rising in…

Simple curves & subtle movements are the philosophy behind this whimsical design by Dutch brand Lonc. The Seaser chair and Teaser stool were specifically designed to…

The pen that captures ideas and holds pages

Whether you’re reading a book or writing one, the Kikkerland Writersblok Bookmark Pen can be quite a handy little instrument. Its elliptical shape lends to easy…