One could argue that there isn’t much you can do to reinvent the grill. Put heat below, food on top, and voila… you’ve got yourself a barbecue. In that regard, the BURCH BARREL is quite similar to the Dyson Bladeless fan. It took a product-category that nobody thought could be reinvented and really showed how a new format could really push the boundaries of design, efficiency, and human perception. The BURCH BARREL isn’t like any conventional barbecue pit out there, and that’s a conscious choice on the part of the designer, who believed that it was possible to create a better product that works as a grill, smoker, and as well as a firepit. The BURCH BARREL gives you unprecedented control over your barbecue process. You can operate the barbecue lid without having to touch it, or rest the grill on any uneven surface without worrying about it falling over, you can even lift the grill plate off the coal-pan to add more fuel. Moreover, when you’re not grilling food, the BURCH BARREL doubles up as a portable fireplace for those perfect sunset social gatherings.

The barrel’s design is immediately striking, with a large tripod system that has the barrel suspended from the very center. This unique format keeps the barrel balanced and vertical at all times, allowing you to mount it on rocky terrain or even on slanted surfaces without any fear of the barrel tipping over. Inspired by a camera’s tripod, the BURCH BARREL comes with telescopic legs that let you orient the unit to be stable, no matter how unstable your ground is, giving it a competitive advantage over regular barbecue grills that traditionally require a flat surface like a pavement to begin with.

Right on one of its telescopic adjustable legs lies a movable grip that slides up and down to lift and lower the grill’s lid. Rather than holding onto a potentially hot handle, this sliding sleeve lets you easily check on your food while keeping you away from the fire and hot metal. Additionally, the lid itself comes with an interlocking system that lets you lift the food-grate up along with the lid, giving you complete access to the coal-pan, allowing you to add more fuel over time without taking your food off the grill. Keep your food cooking while you crank up the heat!

Along with being able to easily operate the lid and lift the food-grate, the BURCH BARREL features a mechanism to adjust the height of the coal bed too, bringing it either closer to your food for a great sear, or moving it to as much as 12 inches away to decrease the thermal energy, but to amp up the smokiness. The coal bed works with both wood as well as charcoal, burning them cleanly while giving you the ability to choose between char-grilling your food or roasting marshmallows over an open bonfire. For more calibrated control, the Burch Barrel packs a redesigned venting system that routes the air in a pathway right from the upper rim of the barrel. Air from the top travels to the base, stoking the flame, while keeping the grill relatively clear of debris or oils and soot that may clog or corrode it.

Ultimately, what the Burch does for the barbecue grill goes beyond just making it functionally advanced. With the Burch Barrel, the barbecue doesn’t remain a one-person apparatus but rather, the nucleus of social bonding. People can gather around the Burch Barrel, collectively participating in the grilling experience, rather than sitting at the picnic table while one person toils over food prep with their back faced to the rest of the group. Designed for an overall better cooking experience, whether it’s grilling game meat with your friends outdoors, making smores with your family on a weekend trip, or just having a party in the backyard, the Burch Barrel is the new best way to grill, cook, and bond outdoors! 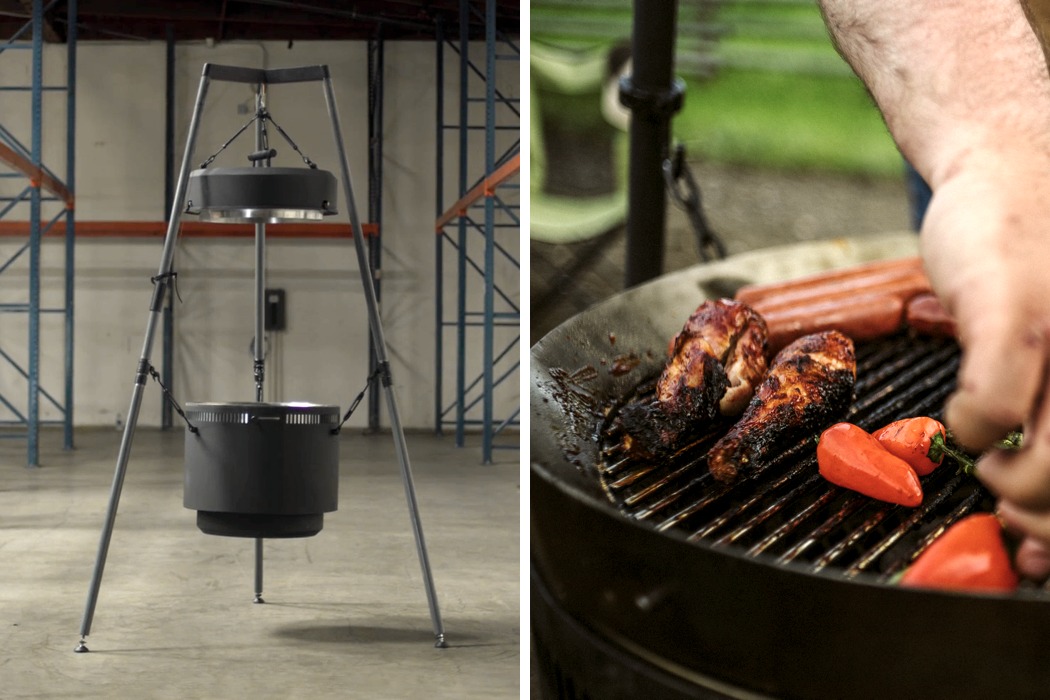 BURCH BARREL: We Were Meant To Grill This Way

From the backyard to base camp, the BURCH BARREL is a portable fire-brewing barrel that burns both wood and charcoal. It hangs suspended between the legs of the EverLevel Tripod, and functions as a gathering point where family and friends can cook, eat, and relax together under the stars. 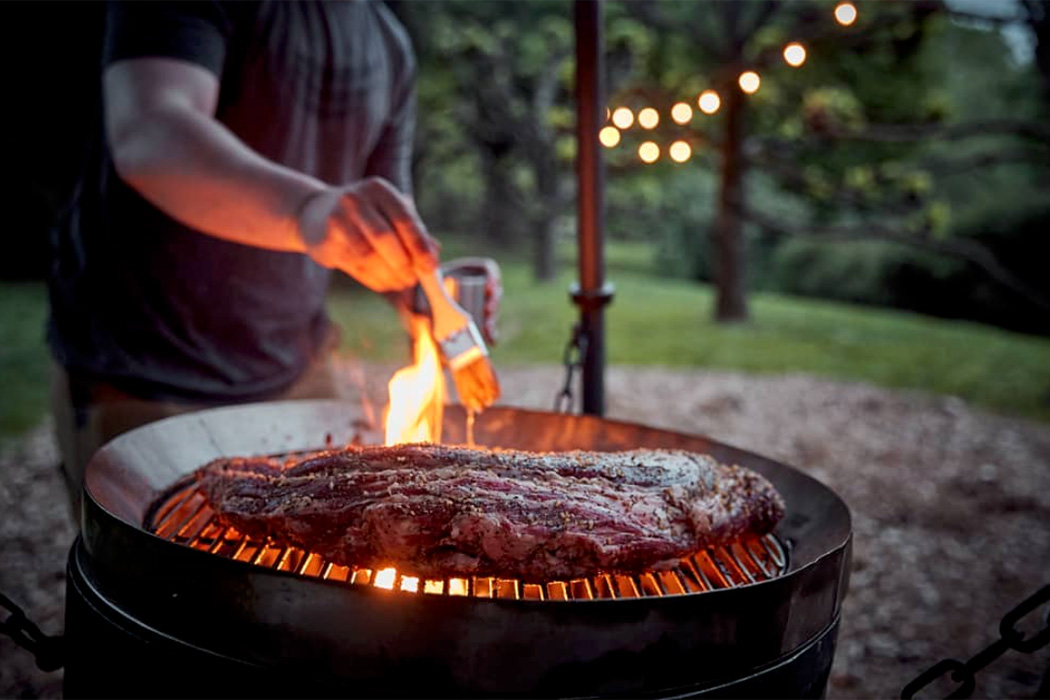 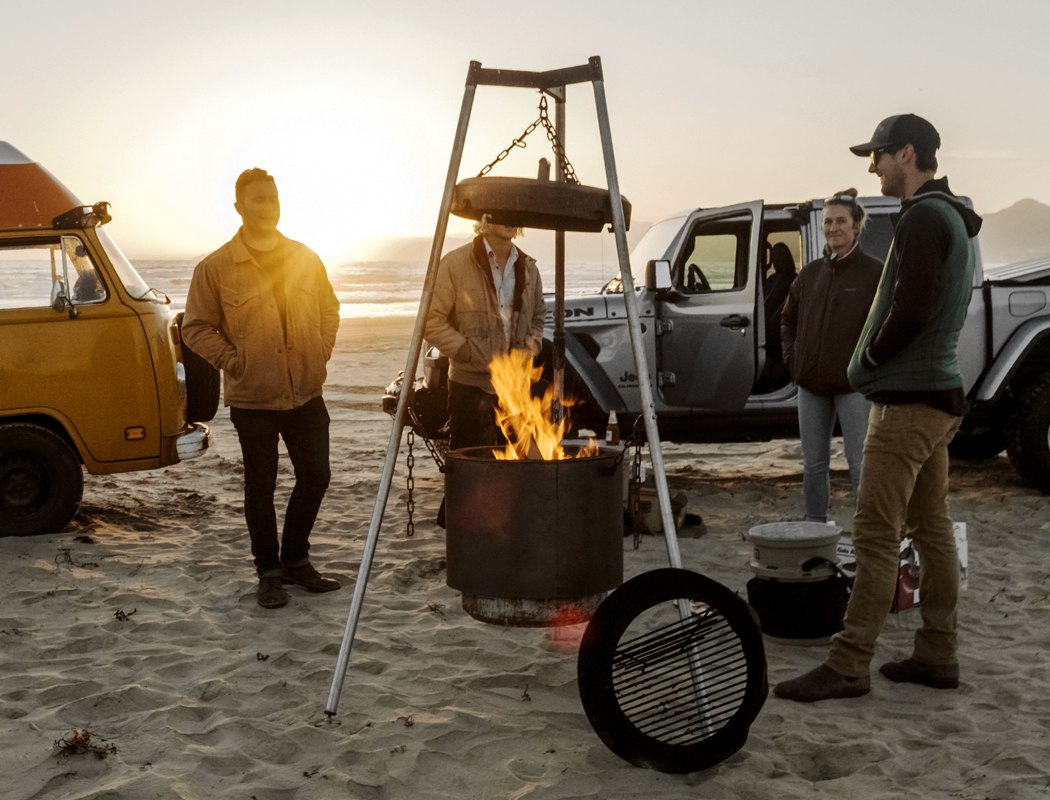 
Founder Roby Burch set out to bring people together and wanted to create an opportunity for more face to face interaction while grilling. The Burch Barrel represents a gathering point that allows you and friends to digitally disconnect and be right there with each other. 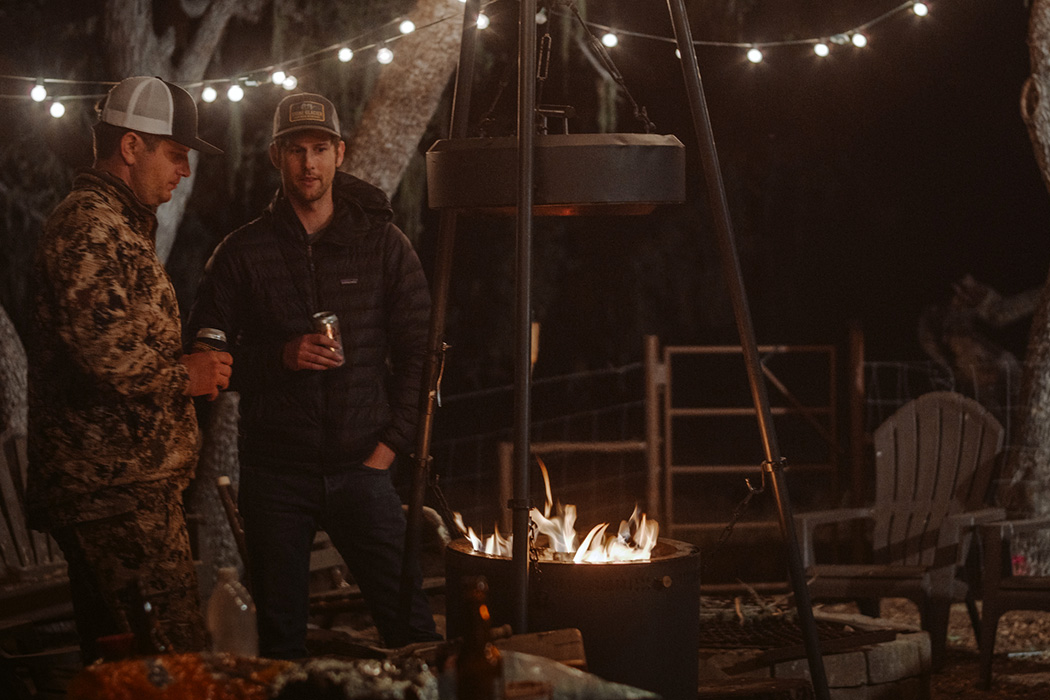 SHARED EXPERIENCE. The communal configuration circles people up so they can face each other and their food – at the same time. You can finally grill, smoke, and entertain without turning your back on your friends.

MULTI-FUNCTIONAL. Smoke your brisket, sear your sides, and sip your bourbon by the fire – all without buying and making space for three different pieces of equipment.

FREEDOM TO ROAM. The packable design, coupled with simple setup and breakdown, means BURCH BARREL goes where you go.

PAVEMENT OPTIONAL. The adjustable legs of the EverLevel Tripod allow rock-solid setups on even the roughest ground.

BUILT TO LAST. Years of hard use lie ahead, thanks to high-grade steel and aluminum components, minimal metal fasteners, unfailing welds, and reliable coatings. 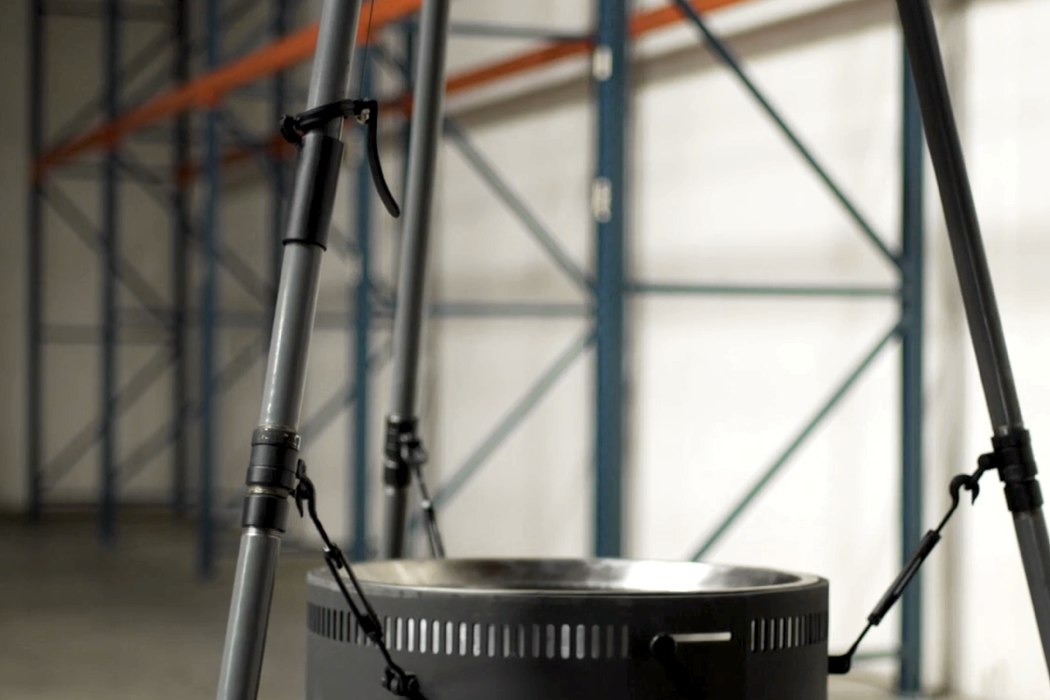 – Up top, the pulley lifts the lid plumb out of the way, so it can’t block your interactions with food or friends
– In the middle, quick-release attachments hold the barrel firmly where you want it
– At the bottom, Billy Feet keep their balance, even on uneven ground. Stake down ring included.

– Hoist the lid by itself, or lock the collar and raise both grate and lid
– Hoist just the lid to check and flip your food
– Hoist both and get access to the coal pan, letting you add fuel without taking food off the grill. No more losing heat or temperature stalls!

– Raise and lower both the lid and grate with precision and ease
– Depress the trigger to release it
– Let go, and the grip locks onto the leg, suspending the lid right where you want it

– Raise and lower coals, even while cooking
– Nine height settings for precision thermal regulation
– Higher settings let you sear and broil fast with intense heat
– Lower settings are ideal for slow-smoked meats, or loading up with firewood

– Designed for clean burning of both wood and charcoal. Simply toss logs on hot coals after cooking
– Rests securely on the Trackster Heat Control Rails
– Attached handle for ease of handling
– Removable and washable

– Draws air from high on the exterior of the barrel, down through the space between the double wall construction, then back up from underneath the coal pan
– Precision airflow controls let you adjust the fire’s temperature while grilling and smoking
– Full open draws a vortex of fresh, pre-heated oxygen, resulting in a hot, bright, smoke-free burn ideal for fire pit mode 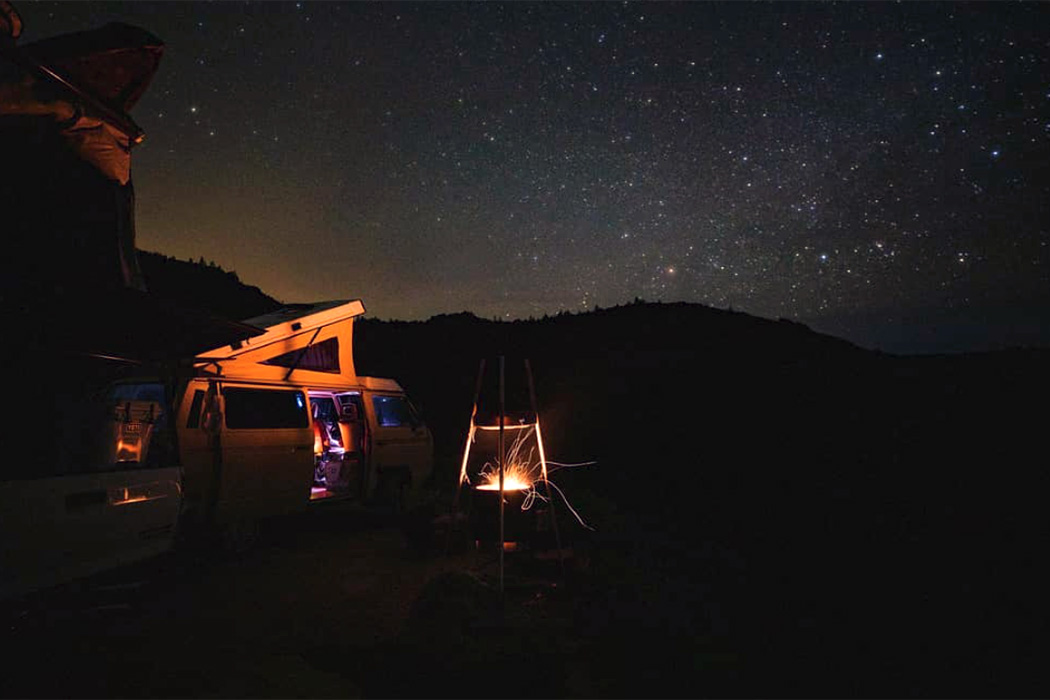 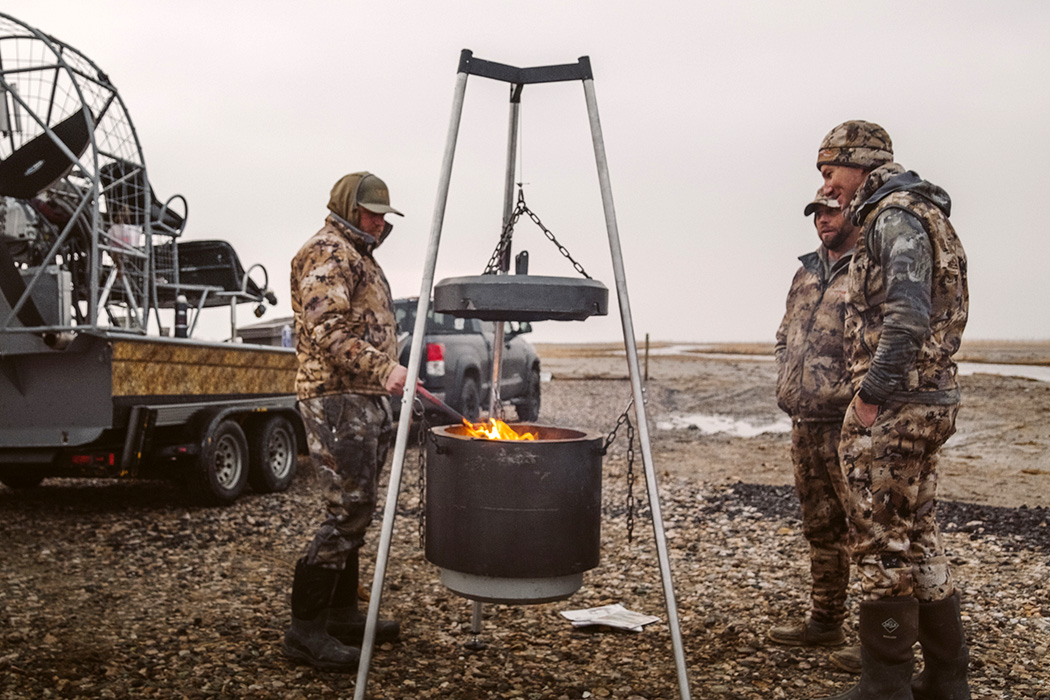 Almost all consumer electronics have experienced the ‘portability’ wave, haven’t they? Vacuum cleaners became hand-held dustbusters, stoves have been portable for ages now. Even the…

The OClock retains the cyclical quality of time, but challenges the notion that you need hands to tell it. Just using two gears, the clock…

A toilet cleaner with a soul

Simple design is always the best type of design. Add to that a beautiful story, and you have a winner of a product! The Bloom…