Here’s something you probably didn’t know. The air you’re breathing indoors is as much as 10 times more contaminated than the air you breathe outdoors. Yes, there’s smoke and dust from cars in the air outdoors, but they form a mere fraction of a fraction of the contaminants in a massive body of air that’s constantly also being purified by the UV rays of the sun, and by the greenery around us. Limit yourself to a few cubic meters of indoor air and the ratio really changes. The air you breathe indoors has nowhere to go, making it staler and mustier than the air outdoors. Bacteria and other microorganisms thriving in your living spaces propagate through the air, and without UV light to kill them, these creatures thrive while being absolutely naked to the human eye.

Now I don’t mean to scare you but it’s a reality that we must accept, that indoors aren’t nearly as pure as outdoors are… and given that we can’t really live outdoors forever like our ancestors did, we rely on tech to purify our air for us. Perhaps one of the latest advancements in air purifying tech, the puripot is an air purifier that can virtually run forever without needing to be maintained or cleaned. While post purifiers rely on filters and cartridges that need periodic cleaning or replacement, puripot uses something known as Titanium Dioxide Photocatalysis to purify the air around you. At its base sits a water bath that you replenish every couple of days. The water traps fine dust while also humidifying the air (you can even add essential oils to it to turn it into a room freshener), while the puripot itself uses TiO2, a photocatalytic ceramic material that’s capable of instantly killing bacteria and VOCs that carry odor. Activated with visible wavelength light, the TiO2 rids the air of microorganisms as well as bad odor, while the water chamber traps fine dust particles. The result is cleaner, fresher air without the necessary upkeep of having to replace activated charcoal chambers and clean out HEPA filters every couple of months. The puripot is capable of running for years without the maintenance or the overhead costs, and its small, smart-speaker-sized, portable format means you can transfer it from room to room, while puripot’s native app lets you switch the purifier on or off through your smartphone. I doubt clean indoor air could get more convenient than this. 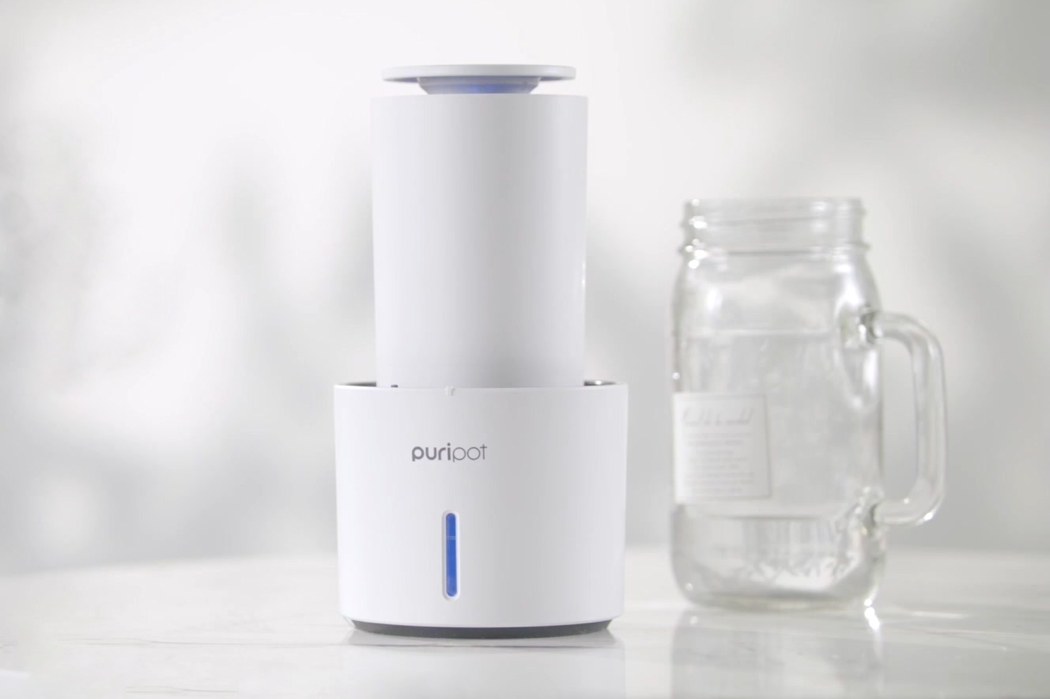 puripot is a personal filter-free air purifier that enhances the level of indoor air quality by removing volatile organic compounds (VOCs) some of which have short- and long-term adverse health effects to human.

Some Facts about VOC:

– Concentrations of many VOCs are consistently higher indoors (up to ten times higher) than outdoors.
– Indoor air cleaning is more important than ever as the world air quality is worsening due to world-wide industrialization push.
– Bad smell is made of VOCs, so puripot can deodorize the air.

Filter-Free: Let Water Do The Work 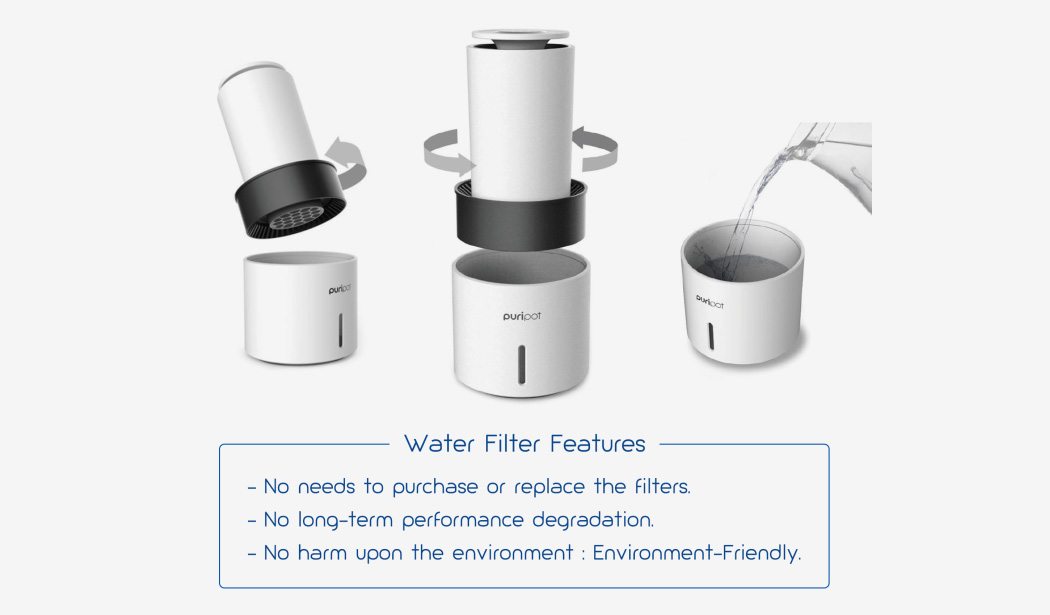 Water works as a filter in the puripot, all you need to do is to pour about 220ml of water into the detachable water tank.

Once puripot is filled with full of water in the tank, the water slowly evaporates with air, in which fine-dust is adsorbed. Even if the water tank is empty, deodorization and sterilization are functioning properly.

The air we breathe contains volatile organic compounds – VOCs include a wide variety of chemicals in use today such as formaldehyde, toluene, and ammonia etc. The ability of organic chemicals to cause health effects varies greatly from those that are highly toxic, to those with no known health effect.

– Eye and respiratory tract irritation, headaches, dizziness, visual disorders, and memory loss are among the immediate symptoms that some people have experienced soon after exposure to some organics.
– Many organic compounds are known to cause cancer in animals; some are suspected of causing, or are known to cause, cancer in humans.

Sterilization, one of the cutting-edge features of puripot immediately begins to eradicate dozens of indoor air irritants. These include such things as mold, bacteria, and viruses. When deployed properly, puripot can protect against Infections.

The oxidizers generated by puripot process do not remain in the air indefinitely. Instead, oxidizers convert back into oxygen and hydrogen once it has one its work of neutralizing odors and eliminating pollution.

Compact and Light: Easy to Take to Anywhere 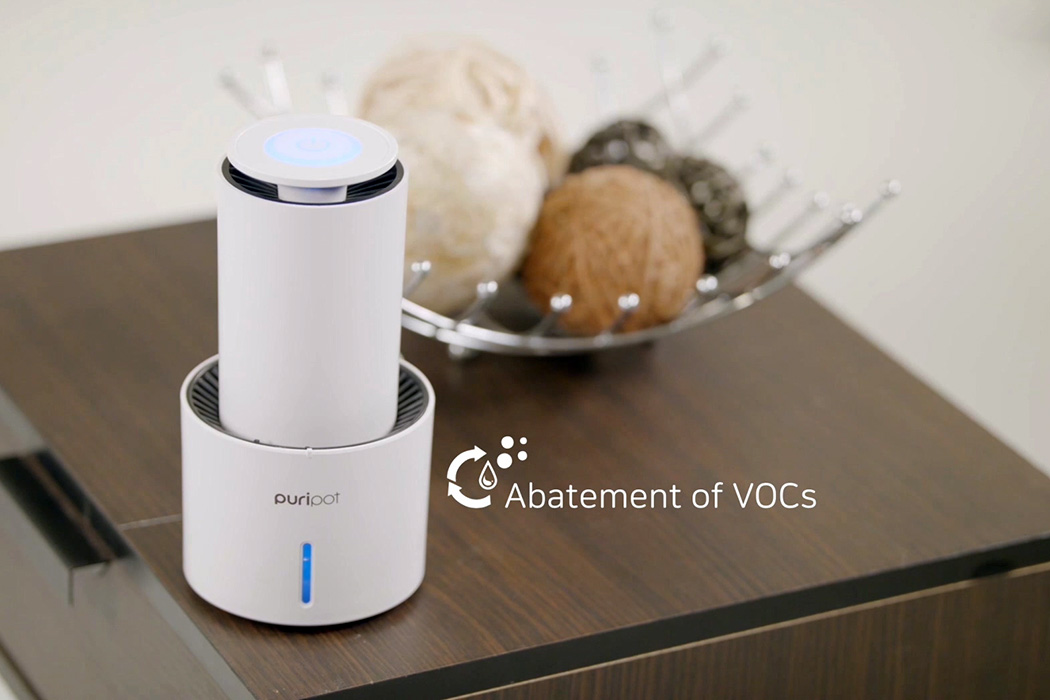 puripot is designed to be small and light enough (less than 1lb).

Ozone-Free by Photocatalysis with Blue Light, The Core Technology of puripot

– The revolutionary technology of puripot is to activate porous Ti02, nanoparticles photoexcitation by using a visible wavelength light so there will be no Ozone and UV (Tech certified by PCT).
– Most indoor air-purifiers in the market that emit even small amounts of Ozone may be risky for the health that despite they approved air quality standards.
– Most air purifiers on the market produce either small or large amounts of ozone, a major ingredient in air pollution. No matter how small, even in very small amounts of ozone, it is highly oxidative and toxic which cause health problems.

puripot app enables you to monitor IAQ (Indoor Air Quality) in real-time and provide you other information needed. 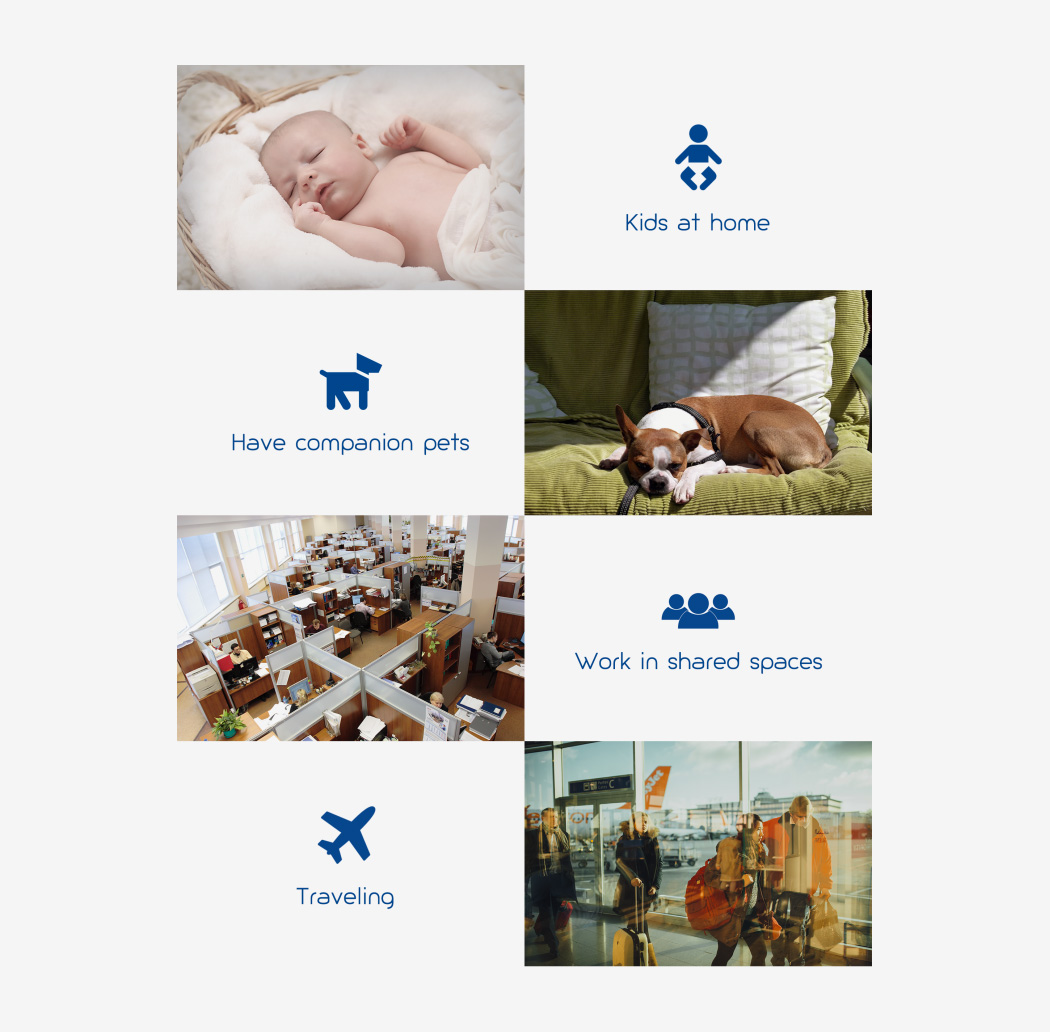 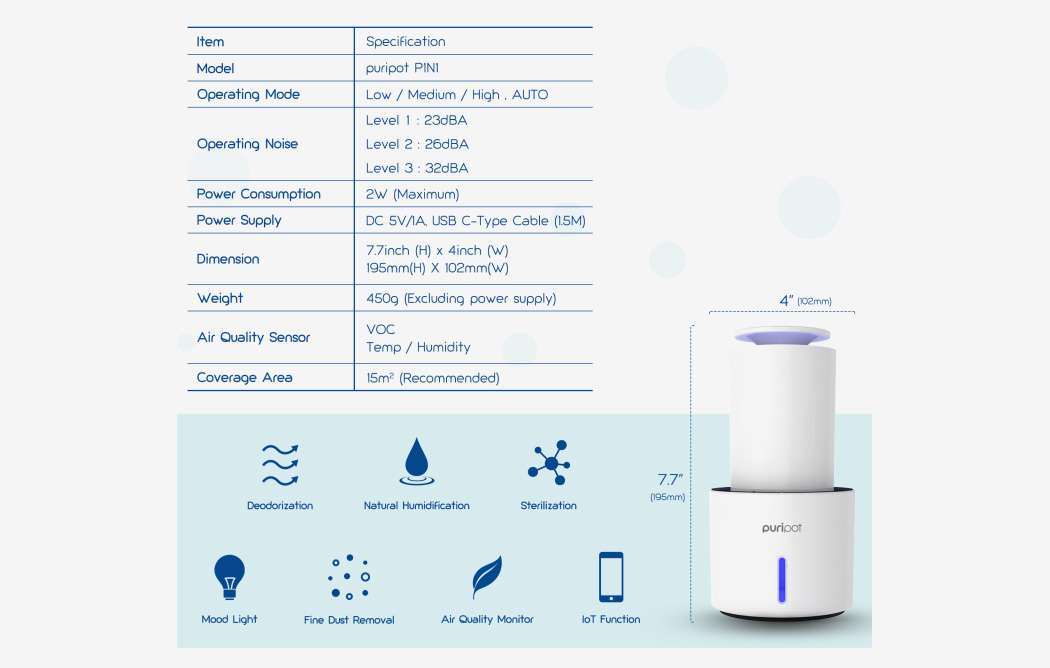 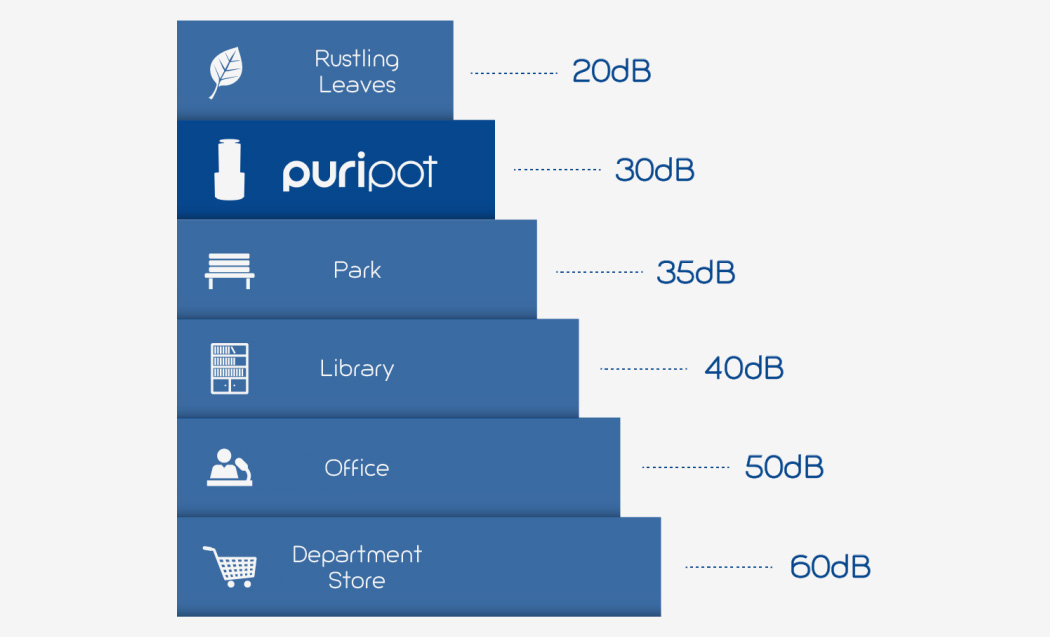 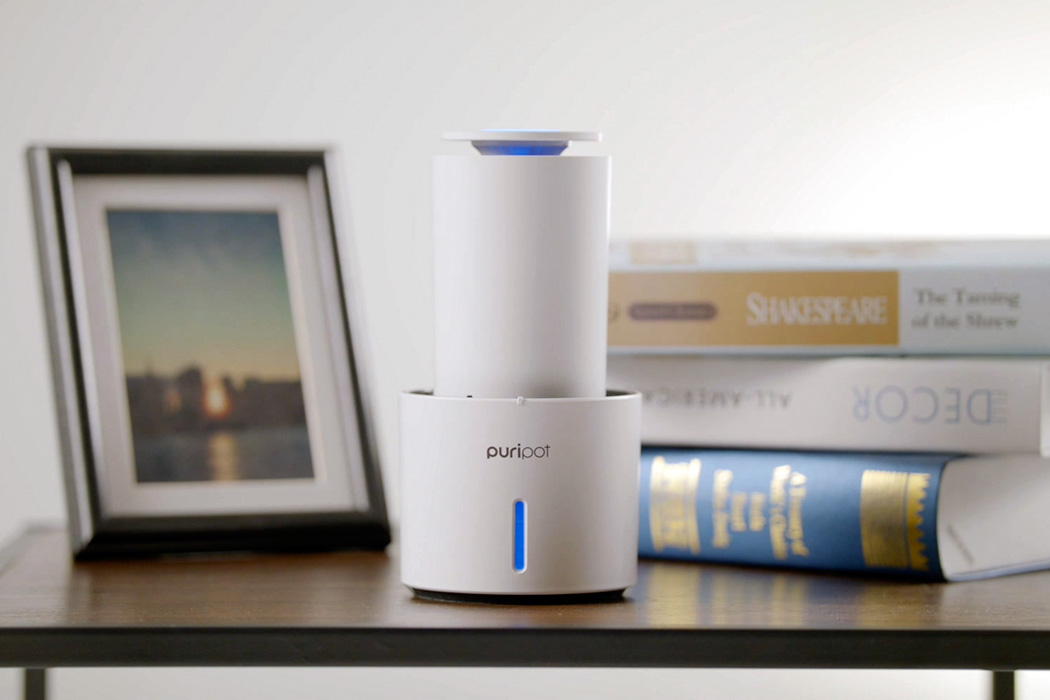 This Apple Pencil-based dropper is a DJ that drops data instead of beats!

Remember the simpler childhood days of using the dropper to pick a color and spill it *carefully* on another sheet? We then advanced from papers…

This tabletop clothes washing machine was designed to clean your undergarments and save water!

Underwear and socks take up a lot more space in the washing machine than we might give them credit. Most of the time, I reason…

Quality never goes out of style and Levis has taught us that very well. And as a tribute to the Jeans that are dedicated to…

LUNARK is a revolutionary smartphone design that utilizes a specialized hinge to allow its dual screens to perform a variety of functions in multiple positions….