Humans have been harnessing radiant hear from the sun since times immemorial. A host of ever-changing and evolutionary technologies have helped us stake claim on solar power, which is free and abundant. Active solar techniques like the use of photovoltaic panels and solar thermal collectors and Passive solar techniques like constructing buildings oriented towards the sun are the two methods that most designers consider whilst integrating solar energy into their design.

The biggest innovator of our time, Steve Jobs too had his opinion on the power and potential of alternative energy and our dependence on it. He felt that there was a way in which Silicon Valley could contribute towards its progress through investments and taking up of projects. The ideas were out there but no one was taking the necessary risks. Looks like we are still too far away from taking full advantage of its potential. 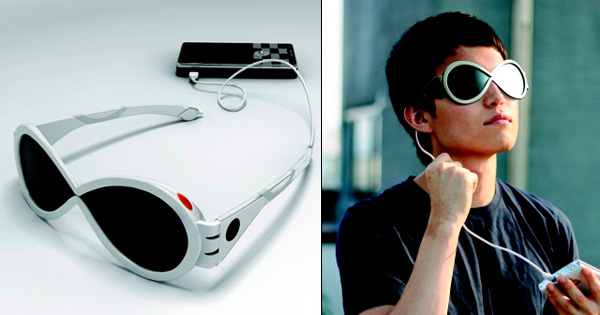 So what is it that we can do? Hyun-Joong Kim & Kwang-Seok Jeong feel that a creative SIG or Self-Energy Converting Sunglasses will be a good way to harness the goodness of the sun and create juice for our devices. After all we will be wearing sunglasses in the sun! The lenses of the glasses have dye solar cells, collecting energy and making it able to power your small devices through the power jack at the back of the frame. The dye solar cell of the SIG uses cheap organic dye along with nano technology providing cheap but high energy efficiency. Inexpensive, light, and visible-ray penetrable. The lens turns sunlight rays, into electrical energy. 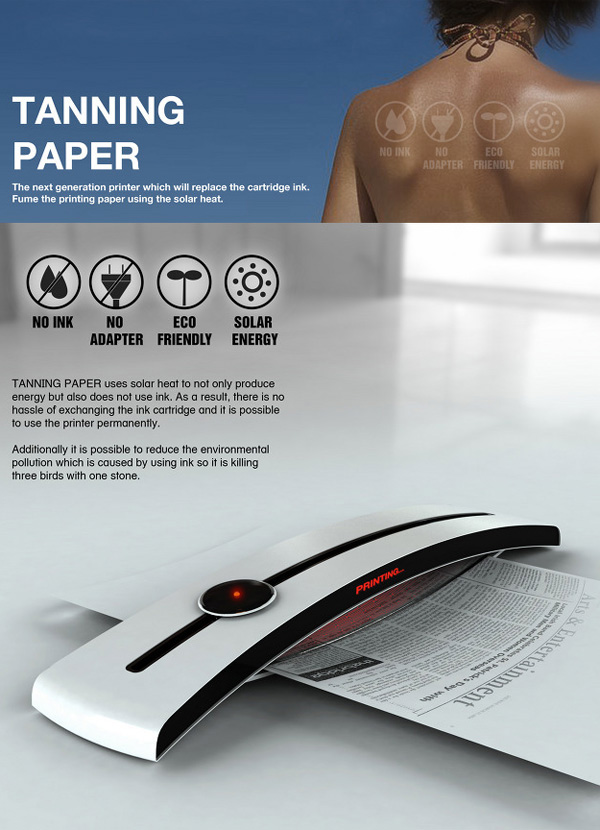 According to Hosung Jung, Junsang Kim, Seungin Lee & Yonggu Do we need to radically think out of the box and invest in a solar powered printer that doesn’t use cartridges. The Tanning Printer that they have conceived uses the process of sun-tanning the paper! 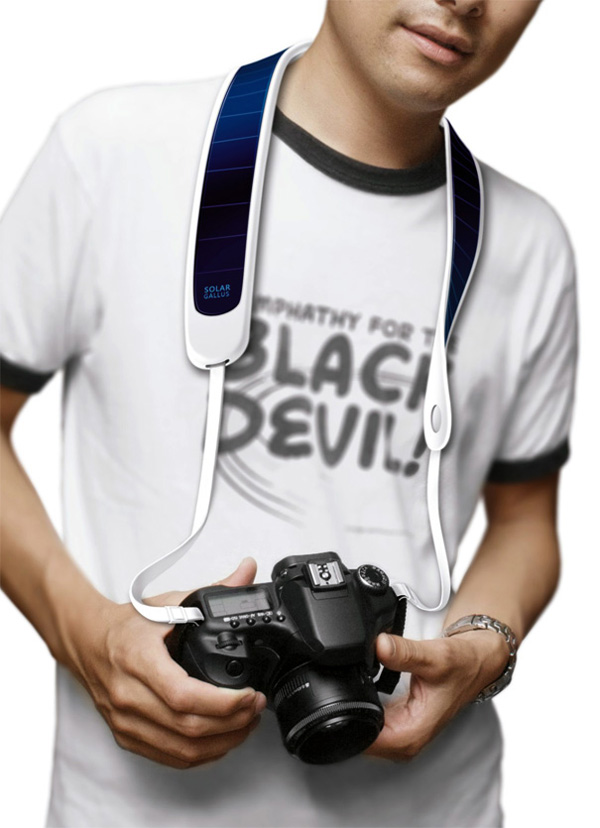 If Weng Jie had his way then we would never need to invest in those expensive batteries used in our cameras. The Solar Camera Strap is a sturdy camera strap with solar panels to trap solar power for the camera. Team this up with a solar energy harvesting backpack and you have a winning combination. 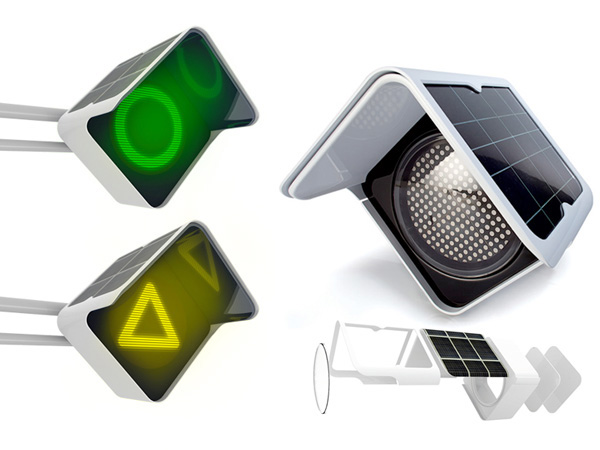 Cheng-Tsung Feng, Yao-Chieh Lin & Bo-Jin Wang think of a more conventional option. Traffic lights are out in the sun and thus the prime spot for harnessing the sun energy. Their version of the Solar Traffic Light has been designed to include Discolor LED (Light Emitting Diode) technology, essentially hosting all the three colors of the lights within a single unit. Red, Amber and Green all together! The lights source power from the Solar Panel on top of the unit, which is elegantly designed as a hood. 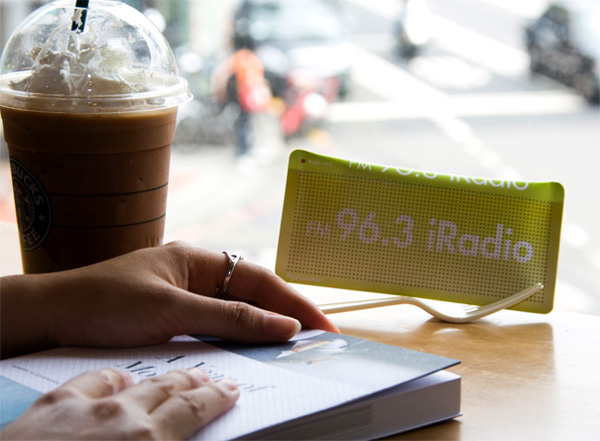 The ones with a really innovative streak are Wu Kun-chia, Wang Shih-ju, Chen Ming-daw & Liou Chang-ho. All of them think that we need to get ourselves a solar powered and portable radio. Their creation the Flexio is sleek and beautifully designed. The innovative factor comes from the flexible speaker & flexible solar cell. It’s designed to be used within the station-waves range, but could be modified to receive Internet radio via WiFi or WiMax. Moreover they recommend using it as promotions and gifts; this ways you not only give an awesome gift but also spread a meaningful message. 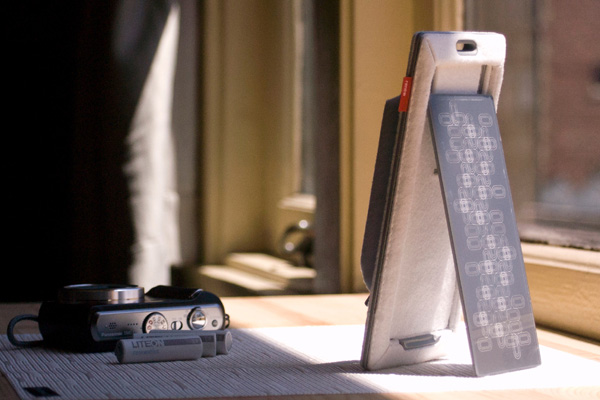 Tracy Subisak, Donn Koh & Herlinda have a brilliant idea up their sleeve with the reNEW Solar Battery Charger. While the pack looks like a neat decorative frame that hangs on your window (via the suction cup) or sits pretty on a table, in reality it’s a solar charger for your re-chargeable batteries. Slide the batteries down the back of the frame, into the protective charging pouch, and when it’s all juiced up, pluck it out from the bottom. 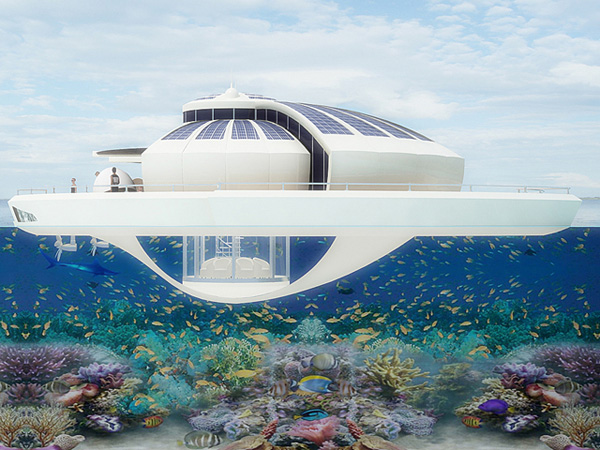 If living on land gets too much for us then maybe we will need to relocate and move onto the sea. According to Michele Puzzolante, The Solar Floating Resort is an example of what the distant future might hold when it comes to architecture, our reliance on renewable resources, and dealing with overpopulation on land. Covered completely in a photovoltaic skin, the resort is 100% self-sufficient and non-polluting. On top of that, the floating palace is actually a modular system that divides into much smaller components that can be moved and assembled almost anywhere. 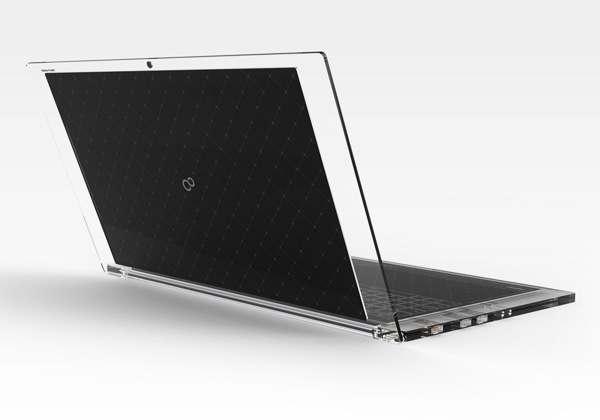 Coming back to where I began this article, if we listen to what Steve Jobs had to say then any step that takes us towards integrating solar energy will be a step in the right direction. So starting with what Jobs was good at, how about a simple polycarbonate laptop that has been inspired by light. Luce features a transparent touch-keyboard, Double Solar Panels (one on top and the other under the keypad) and the possibility of having a laptop that needs NO WIRES! Yes, even for charging it, is something that Andrea Ponti wants us to consider. I am sold on the idea of investing in solar energy, the question is will you as a consumer be willing to pay a tad bit extra for this super awesome energy source?

This Sofa will have you drooling!

The Re Cinto Sofa’s an award winning piece of furniture, but I love it for an absolutely unrelated reason. From a distance, it looks like…

Dual camera? How about Dual Screen!

https://youtu.be/607ETlNdQ-c We’ve seen this idea being thrown around a lot. Everyone wants more real estate on their phone. A tiny screen doesn’t cut it for…