So far we have had four awesome designers share their wealth of experiences in this Inspirational and Exclusive Interviews series. Robert Brunner spoke about the core DNA of a designer/entrepreneur; Scott Wilson showed us how to rise from the ashes like a phoenix; Karim Rashid taught us his roadmap to success and Yves Béhar spoke about forging partnerships. My recent visit to the red dot award ceremony for product design at Essen, brought me face to face with the charismatic Hideshi Hamaguchi, the inventor of the USB Stick. Yes, the very same stick you use to store data, transfer files etc.

I could not let this opportunity pass up as I knew Hideshi’s perspective on innovation and design would be priceless and moreover his methodology and approach is so unconventional and inspirational, that it has to be shared. 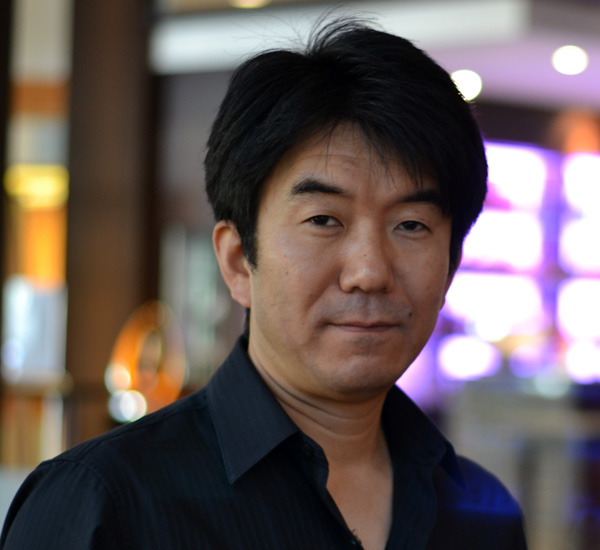 To give you a background, Hideshi Hamaguchi is a chemical engineer and a math’s champion in Japan. He started his career in Panasonic as a researcher and after three years of working with the company he found something critically missing in the work environment and corporate setup. He realized that the company made no provisions to breed creativity. There was a lack of a logical approach to expanding the team’s resourcefulness.

Creativity for Hideshi is very intuitive based, however there were no concrete steps by the company to explore this aspect. He sought to formulate an approach that would expand his and his group’s creativity. And thus transitioned from a researcher to an analyst and then went to become a creative strategist.

Despite the fact that Hideshi has more than 120 innovations to his credit, it comes as a big surprise to me that he cannot draw! I had 2 Nikon cameras and an iPhone with me, and Hideshi, without naming them (confidentiality clause) told me that I was using 5 of his innovations at that very moment! According to him, if you don’t have the talent for drawing but are good at strategic thinking, then you can still become a great product designer. All you have to do is connect the design to the strategy and then turn into a language the company management people and the consumer can understand.

To sum up Hideshi, he is a creative thinker, a strategist, and an innovator who follows a process, which has a practical approach. His process theory is teachable and learnable, which is why he lectures around the world and conducts workshops.

How can people be creative without drawing beautiful pictures? What is Creativity? 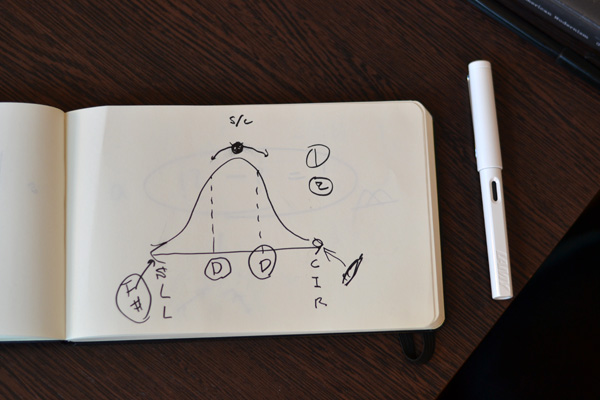 You have to train yourself to draw diagrams and doodle.

Creativity is all about people’s mindset. Creativity doesn’t exist in the air. It’s in your mind, and even when we are collaborating, I am stimulating you and your outcome is stimulating me. To understand creativity we need to understand the brain.

Hideshi explains that the brain has two extremes: the structured thinking, which is very logical thinking versus the very intuitive and chaotic thinking. One side is focused while the other is all about exploration. The ideal balance between structured and chaos thinking is peaked at the sweet spot of Structured Chaos Mode, right on top. But this position is like a volatile ball that rolls in either direction, depending upon the individual’s inherent nature. To keep it balanced at the peak, you need to do something radical. From Hideshi’s experience the profile of moving from chaos to logical thinking to strike the structured/chaos balance, is wrong.

If the highest form of creativity is at the structured chaos mode, how can we manage it?

Technically there are two ways to manage it, first way: go back and forth between logical and chaos thinking, till you achieve the peak. Example, say I ask you to innovate a pen and present it to the red dot jury in one hour’s time. And after you do that, now I ask you again innovate the pen, but his time, I give you a day for it. The first day is to draw inspiration; the second day is to create some structures and ideas etc, till finally you give me the design. So stimulating the brain between the chaos and logic thinking, will peak your creativity to the structured – chaos mode. 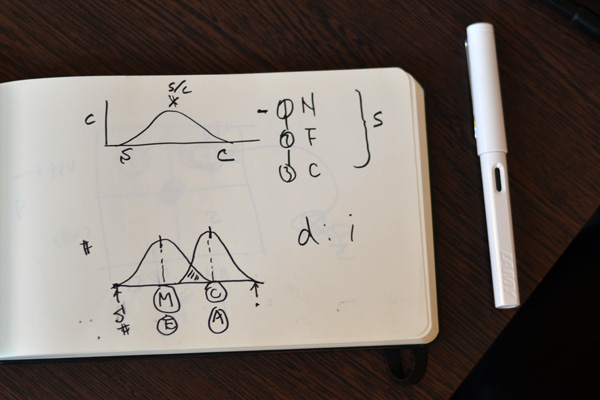 The second way is to use a formula or some data analysis, example market size or market tastes for pens as a reference, and then combine it by drawing some beautiful lines that ultimately lead you draw some innovative features for the pen. So you make your brain use the logical and the intuitive side, at the same time. And thus you can hit the sweet spot. But in reality, you need to do diagram and you need to doodle to hit the sweet spot. Diagrams are something simple, something logical, and something visual. Draw the diagram and your brain goes to the logical side without being too intuitive, now to balance this you need to doodle. And this stimulates the creative brain.

Since Hideshi is an innovator, I had to ask him…what is innovation?

This is what Yanko Design is! 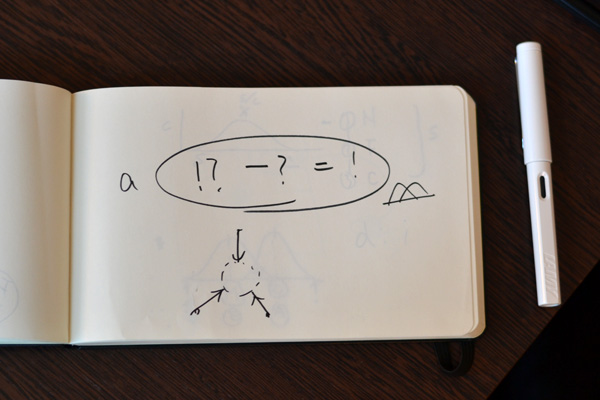 Innovation is all about creating new behaviors and new values for people. For example the USB Dongle. It created a new value of keeping your data on a small stick that was portable and new behavior, as in attachment to your data, sharing it with people and friends. In 1999 Hideshi came up with the idea for a client, of adding a tangible feeling for your data (he called it the sneak-kernet), we had that feeling for the floppy disk or the CD but it was time to move on to something different but no one agreed with him. At that time everyone thought that everything was going to be on the Internet and wireless so a cloud storage medium would have more value than this.

Even Intranet faced this issue. Hideshi and his friend are responsible for creating the first intranet in Japan. And probably the first in the world, it was done in 1993. He did it for Panasonic, where the board members were not so very computer savvy. If you see it this ways, intranet changed the behavior in people and the value for information. 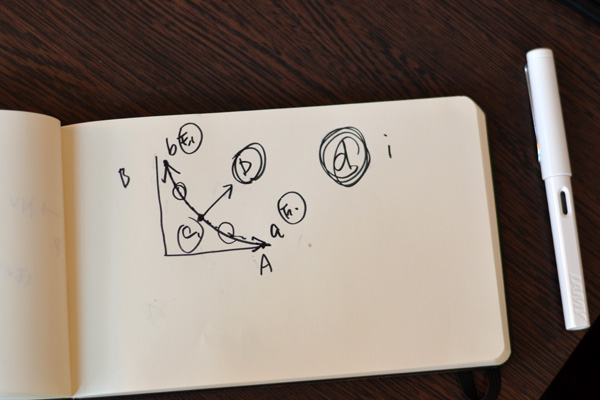 Innovation is something that is something new; something that is doable and it should create controversy. It should create some tension in the conversation. One advice that Hideshi gives is that when you are brainstorming for creating an innovation; never focus on the idea itself, because that usually never helps. His focus is to analyze and see how people think. If you can analyze their thinking you can break the paradigm and go against their bias and thinking. You break the bias and push yourself towards the controversy thinking; this is how you break the paradigm. But if you cannot visualize the bias or the thinking of people, then you will not be able to innovate. You have to break the abstract things; you have to understand the way of thinking and visualize the pattern. If you visualize it, you can be a wonderful innovator. So basically you need to make a shift and break a bias, and this is the biggest barrier that innovators face.

Earlier in the 90’s the shift was focused only on technology innovations for computers, faster CPU, better inputs etc. but in comes Dell and they created a new shift with their business model. They revolutionized their supply chain, the customer experience and online customization of the PC. This was breaking the paradigm.

How to create a balance when you have to present a design or an idea so that appeals to the technologist and the corporation managers; in short how to address the engineer-designer conflict?

When we chart the Structured chaos diagram in a real life situation, unfortunately most of the population lies with the intersection of two structured-chaos loops. Majority of them don’t think super-structured or the other extreme of super-intuitive thinking. The problem is that we don’t have many people who can handle the structured chaos mode. Corporate mangers and engineers are more inclined towards structured thinking and designers and artists are more inclined towards intuitive thinking. They are two different animals!

And as he explained earlier, the engineers and corporate heads tend to use numbers and the designers use images; hence the dialogue cannot be bridged. They are disconnected and there is a lack of communication. But if we lay some ground rules, a common language can be spoken, for example the corporate manager should refrain from asking the designer about numbers and cost calculations, where as the designer should go deeper and relate a story rather than just talking about intuitive design.

Logical and intuitive people both can train themselves to move towards the balance sweet spot of structured chaos by pushing their boundaries and moving towards the other side of the graph.

The reason why Hideshi is ahead of his game is that while each person who he works with, specializes in their one field with total focus on it, and Hideshi has the ability logically connect the dots between innovation, marketing, strategy, tactics, uncertainty, technology and business model.

Summer’s up and as most of you design students must be getting ready to buy supplies for the new term. Before you head out for…

Sundog Creative Director, Michal Hrk and solidThinking have got together to bring you a free webinar on how to move from an initial sketch, explore…

Bless technology for making a photographer out of all of us, and bless accessories that add in refinements to make us look like pros, even…

It’s the most wonderful time of the year and this time we’ve put together a gift guide for all you design-heads. The most precious gift…