In nature, things that are sharp, or colorful, or hard, are a lot less likely to be eaten by bears. Bears will eat salmon instead of porcupines or cacti (supposing they have cacti available.) This is also true of bike thieves and bike locks. There are plenty of relatively excellent bike locks out there, but how many of them explode? The Smart Lock – It Explodes.

Michael Lambourn presents the Smart Lock: “‘17% of cyclists have suffered bike theft in the last 3 years; of these 24% no longer cycle at all, and 66% cycle less often’ (Department of the Environment, Transport and the Regions, 1997) Cycle theft is deterring people from using one of the most efficient forms of environmentally friendly transport. It is considered petty theft but can have huge emotional effect on the victim. Smart Lock is lightweight but offers additional protection. It’s quick and easy to use and allows the cyclist to lock both wheels and the frame. If breached, Smart Lock helps the authorities identify your bike, and links the perpetrator to the crime. It also stains the ground identifying areas vulnerable to theft. Smart Lock helps you keep your bike.”

In a nutshell: when cut, colored liquid inside the entire length of the Smart Lock explodes forth unto the thief! The thief then proceeds to appear to have wizzed his or her pants. The liquid also stains the surrounding area.

While I can think of more than a couple ways that one could avoid the spray of death, I imagine that this particular lock would defer thieves the way security system installed stickers on car windows work. The thief thinks “purple explosives? or the bike next to it?” 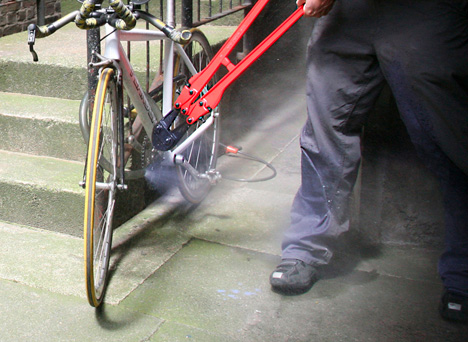 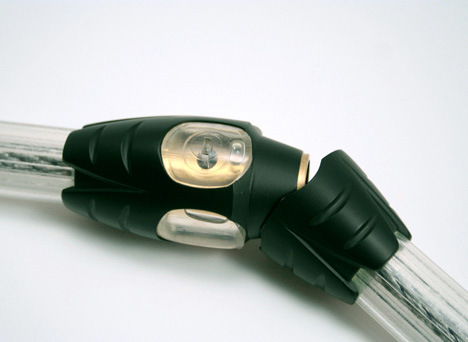 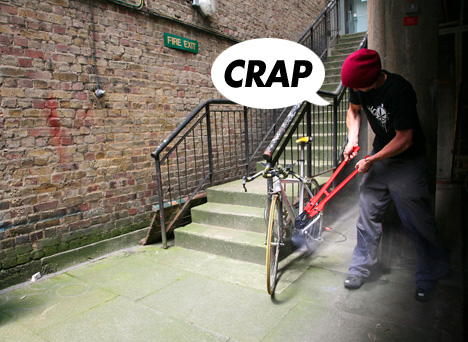 The average bike shocks just won’t cut it for extreme off-road enthusiasts! That’s where Triple M comes in. The first of its kind, the design…

It’s rare for Silicon Valley companies to actually explain their design choices and decisions to their customers. Google flouted convention by beginning their Pixel Fall…

Throw out your boring overhead office lighting for interactive illumination! The Adaptive Luminaire merges industrial lighting with gestural control for a more versatile solution for…