Optimus keyboard creator Art Lebedev Studio today provided an early look at the Verbarius. A natural-language clock, the Verbarius tries to liven timekeeping by expressing the time the way many people do in conversations, randomly choosing between descriptions such as “forty-five minutes past four” Or “fifteen minutes to five” It can also read the time in four other language, Russian, French, German and Spanish. The studio also aims for a minimalist effect and hides the LCD in a solid glass block that appears to float the words in space. 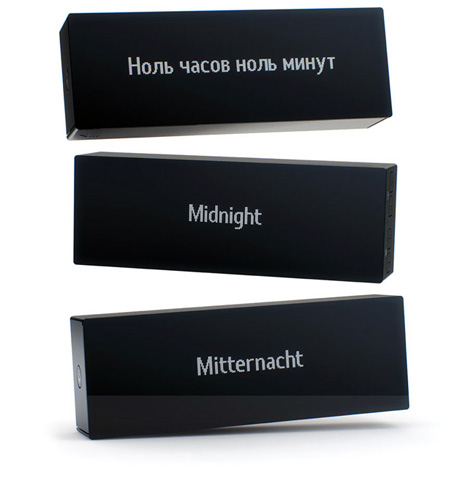 A workspace with grace

I really like it when I see new designs that remind me of old design classics. The Mystica Desk is a beautiful office workspace that’s…

No larger than the size of an electric toothbrush, the Clean focuses on personal hygiene by allowing you to clear your ear canals of dirt…

Inspired by the literary work of Paulo Coelho, the Animada chair is the sculptural genius of designer Eduardo Benamor Duarte that channels the animistic belief…

It doesn’t quite have the iMac’s Center Stage yet, but it’s getting there… Is it just me or does it feel odd that desktop monitors…