Plus, it can even be your new fidget toy, too!

We often devote a lot of space and attention to desk organizers, drawers, containers, and whatnot for some of the biggest sources of clutter in our lives. We have cases for pencils and pens, trays for paper, bins for magazines, and even drawers for watches, phones, and keys. These are, of course, useful and much-needed, but sometimes the biggest problems are actually the smallest items in our possession. Paperclips, small jewelry, dice, and especially coins seem to defy our efforts to keep a clean desk despite their size. In fact, it’s exactly because they’re so small that we tend to take them for granted until they’ve amassed enough numbers to invade the pristine surfaces of our tables and shelves. Fortunately, this coin bank not only makes it too easy to drop coins and other stuff into its bin, but it also makes it fun to take them out again when you finally have use for them. 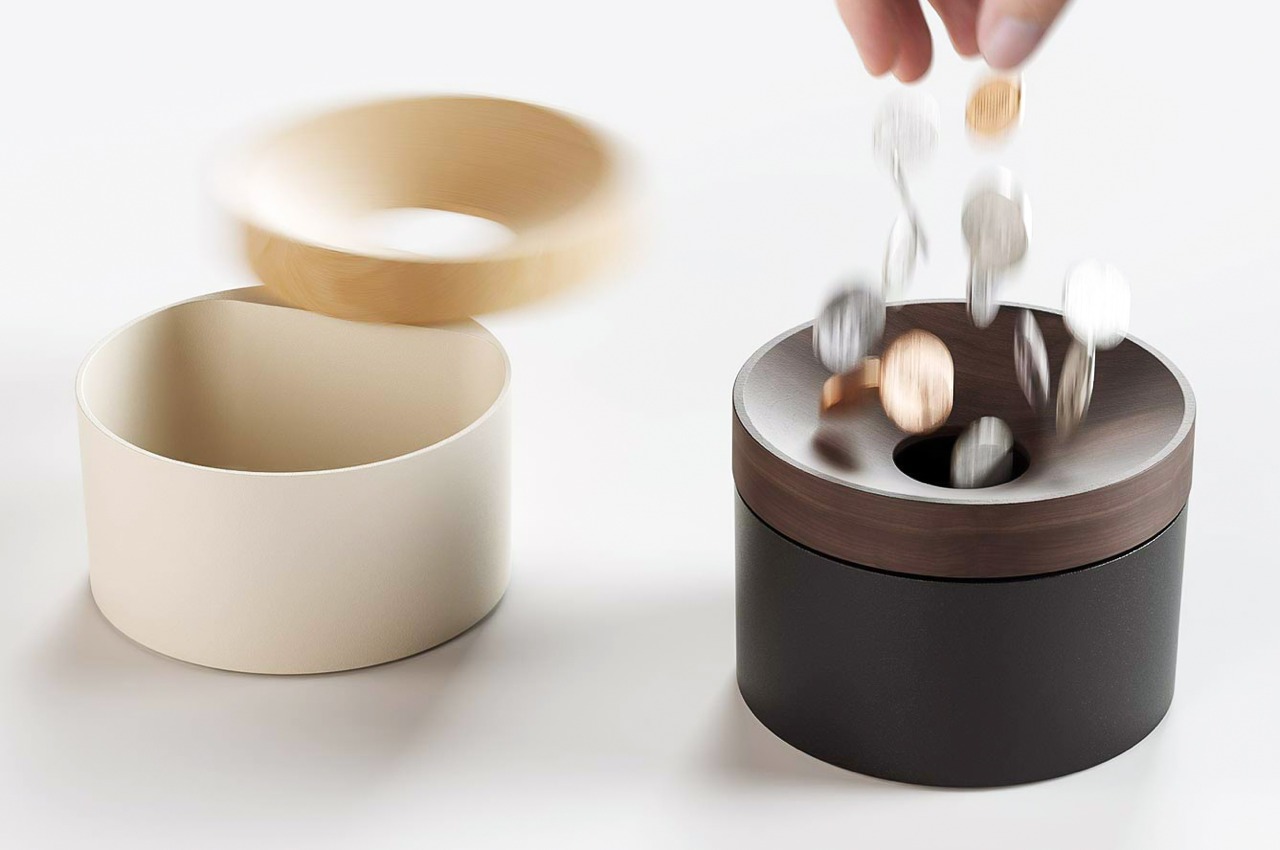 There are plenty of coin banks, sometimes even in pig shapes, and most of them are designed to make it harder to take out the coins you put in. Ironically, they also seem to be designed to make it difficult to put in stuff in the first place. The thin slots that barely have room for the coin are like eye slits that leer at your feeble attempts to save money. More often than not, people just tend to leave their coins lying around as a consequence, eventually losing them completely in the long run.

The Coin Bank makes it trivial to put things inside it while also making it easy to take items out. The large hole in the middle welcomes coins and objects of many sizes, but it’s the concave shape of the lid’s surface that almost makes the activity fun. Simply drop your coins, die, jewelry, or knickknacks and watch them slide inside. You don’t need to be a basketball pro or a sharpshooter to make sure those things end up inside rather than the outside.

And when the time comes to use those hard-earned savings, simply push the lid to move it out of the way. The lid almost floats over the bin, so there’s barely any resistance when you need it to swing open. At the same time, the magnetic rotating mechanism keeps it steady and prevents it from opening at the slightest movement. The lid’s bouncing and swinging movement can be so addictive that you might find yourself using it as your new fidget toy. 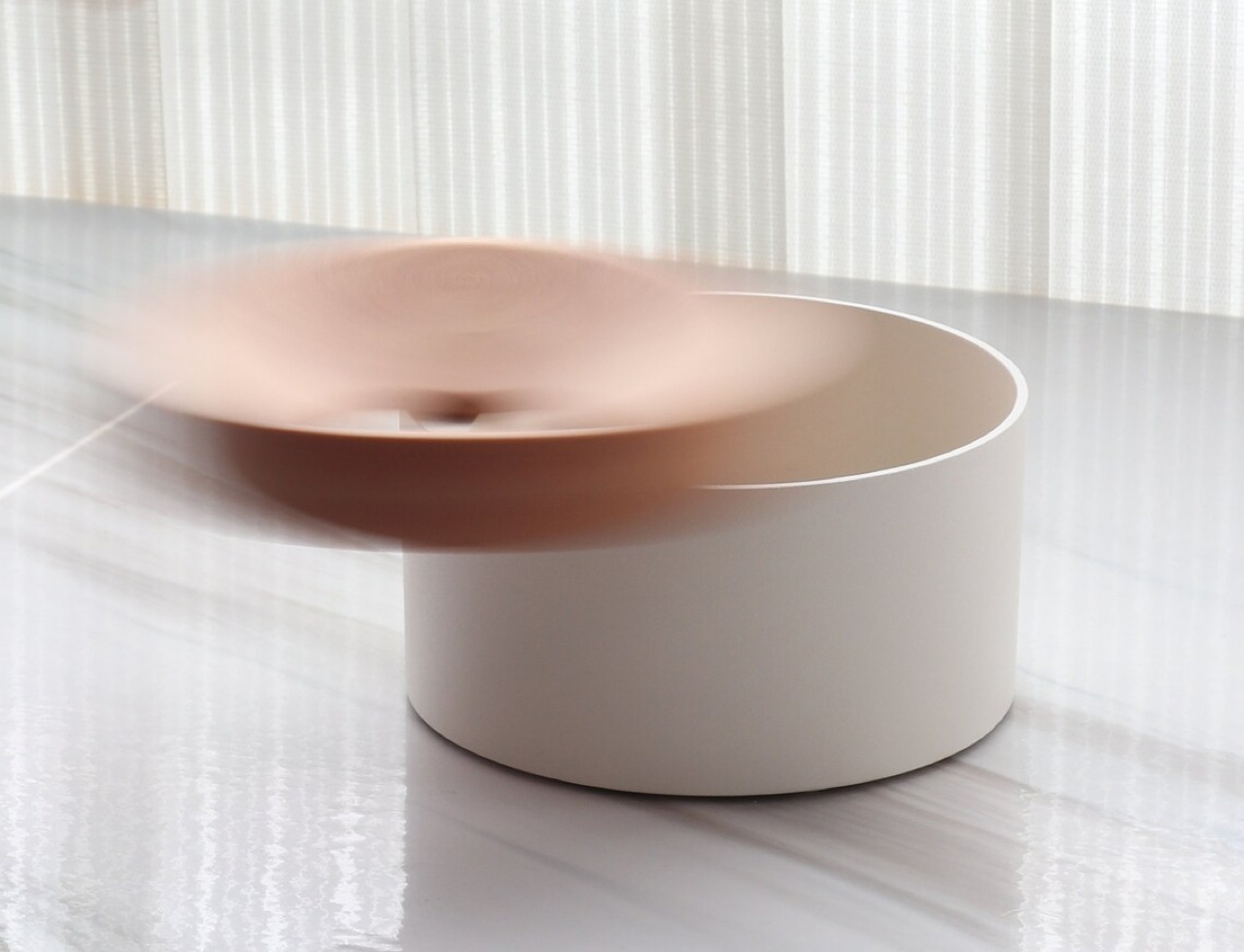 This rather innovative coin bank isn’t just useful, it’s also beautiful. It combines the best of the Earth to present a minimalist wonder on your desk. The upper lid is made from beech wood, conveying a feeling of warmth both to the eyes and to the touch. The aluminum body, on the other hand, may look and feel cold but offers stability and durability to the container. Together, these elements contrast and combine in a harmonious way that almost entices you to drop things into it and play with its lid for a while.

Keeping surfaces clutter-free doesn’t have to be a chore, especially if you have tools that almost turn it into a game. With a lid that lets things slide easily inside but then smoothly swivels out of the way to reveal its contents, this minimalist coin bank removes all friction and hurdles in putting small items out of the way. It might even help you save more money because it’s so addictive to watch the coins just slide into your bank for safekeeping.

The Apollon is a clever camera design makes taking photos an entirely new experience! If your casual photographer friends have one too, you can link…

What do Photography and Pasta have in common?

When you look at Joseph Joseph’s Spaghetti Measure, you instantly see a resemblance to a camera’s aperture/shutter. The spaghetti measure borrows a rather nifty mechanism…

Dear Alan, Apple will love you for your Gaming Pod concept and gamers like me who can’t live without the iPhone for this very reason,…

Its been about three months since everyone has been working from home due to quarantine. While places are starting to slowly open up, some like…