For people who want to live off the grid, Hikerpower actually lets you carry your personal grid along with you.

From afar, the Hikerpower distinctly looks like two things. Firstly, you’d probably think that it’s a backpack, given how it straps to your back for the sake of portability. Look closer and that shape will instantly feel familiar. It kind of looks like a DSLR’s body without the lens! With an aesthetic that’s sure to grab your eye and pique your curiosity, the Hikerpower isn’t, in fact, a traditional backpack OR a DSLR. It’s actually a portable power station that packs a whopping 600Wh battery on the inside that’s capable of outputting 1000W of power. Perfect for outdoor treks, camping, or even using on your lawn, Hikerpower gives you your own personal battery pack that you can use to charge anything from your smartphone to your e-bike. Got stuff you need to carry? Well, the Hikerpower does (technically) function as a backpack too, allowing you to carry food, water, clothing, drones, cameras, and more. 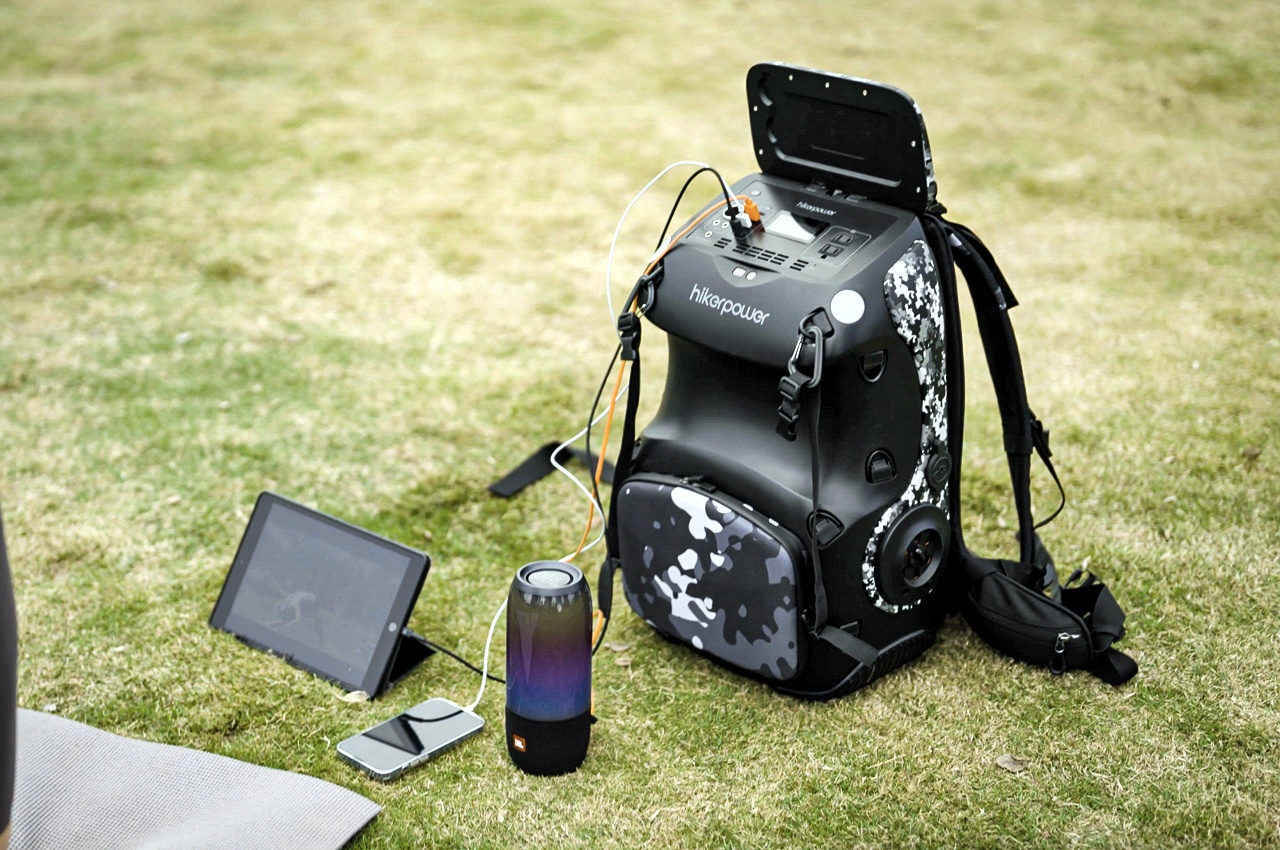 Let’s face it… it’s 2022 and that portable power bank doesn’t quite cut it anymore. Our battery needs have evolved well beyond just smartphones, which explains why companies like Ford are literally letting your EV power your house in the event of an outage. The Hikerpower is pretty much like that, sans the actual EV. Designed to be the first battery pack that you can actually wear, Hikerpower gives you energy independence or what its makers like to call the third Industrial Revolution of the Power Station (the first being the grid, and the second being backup power). It weighs a manageable 18 lbs or 8.2 kilograms (that’s roughly how much the average rucksack would weigh), and packs its own 600Wh battery inside the bag’s rugged, hardshell case. 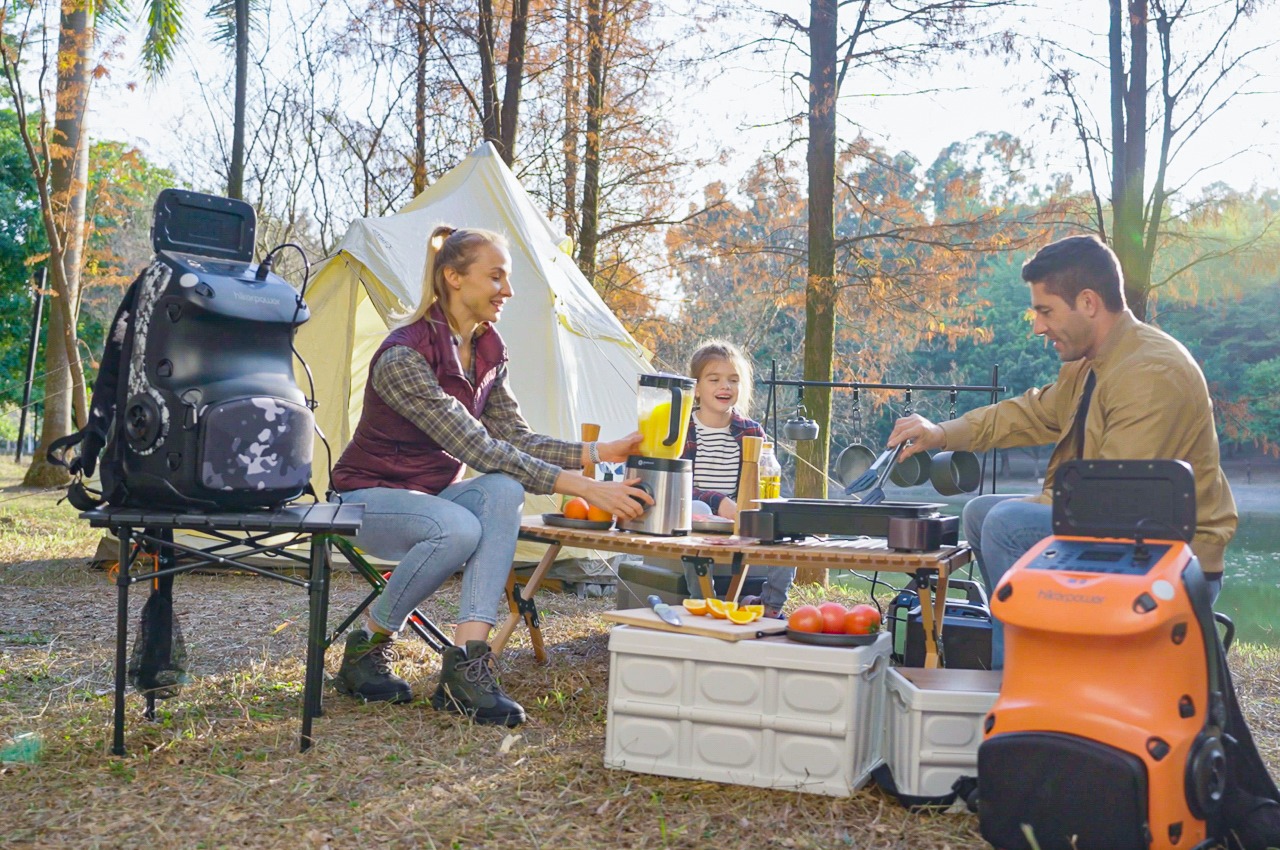 The Hikerpower can provide 600Wh and 1000W of stable and sufficient power support. 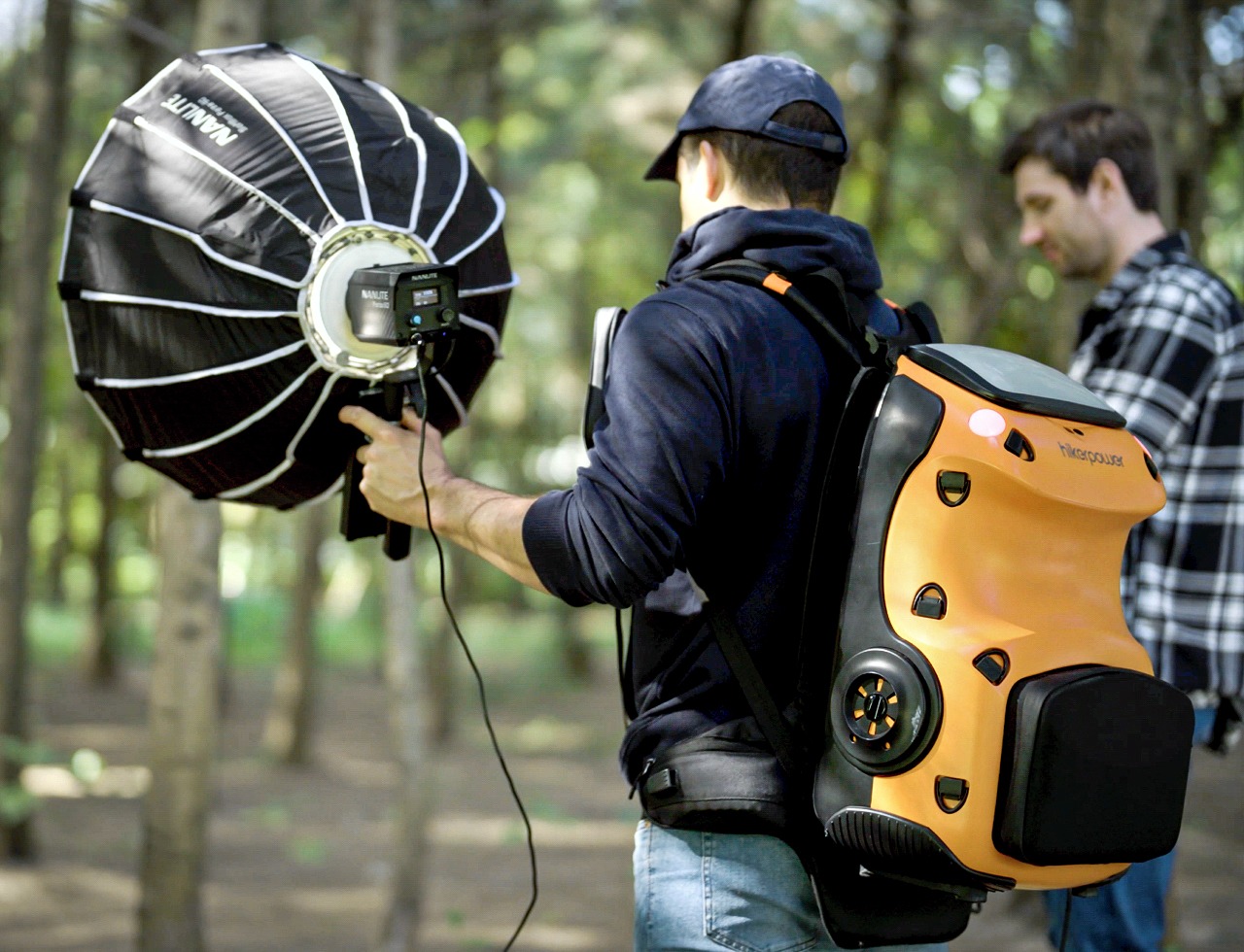 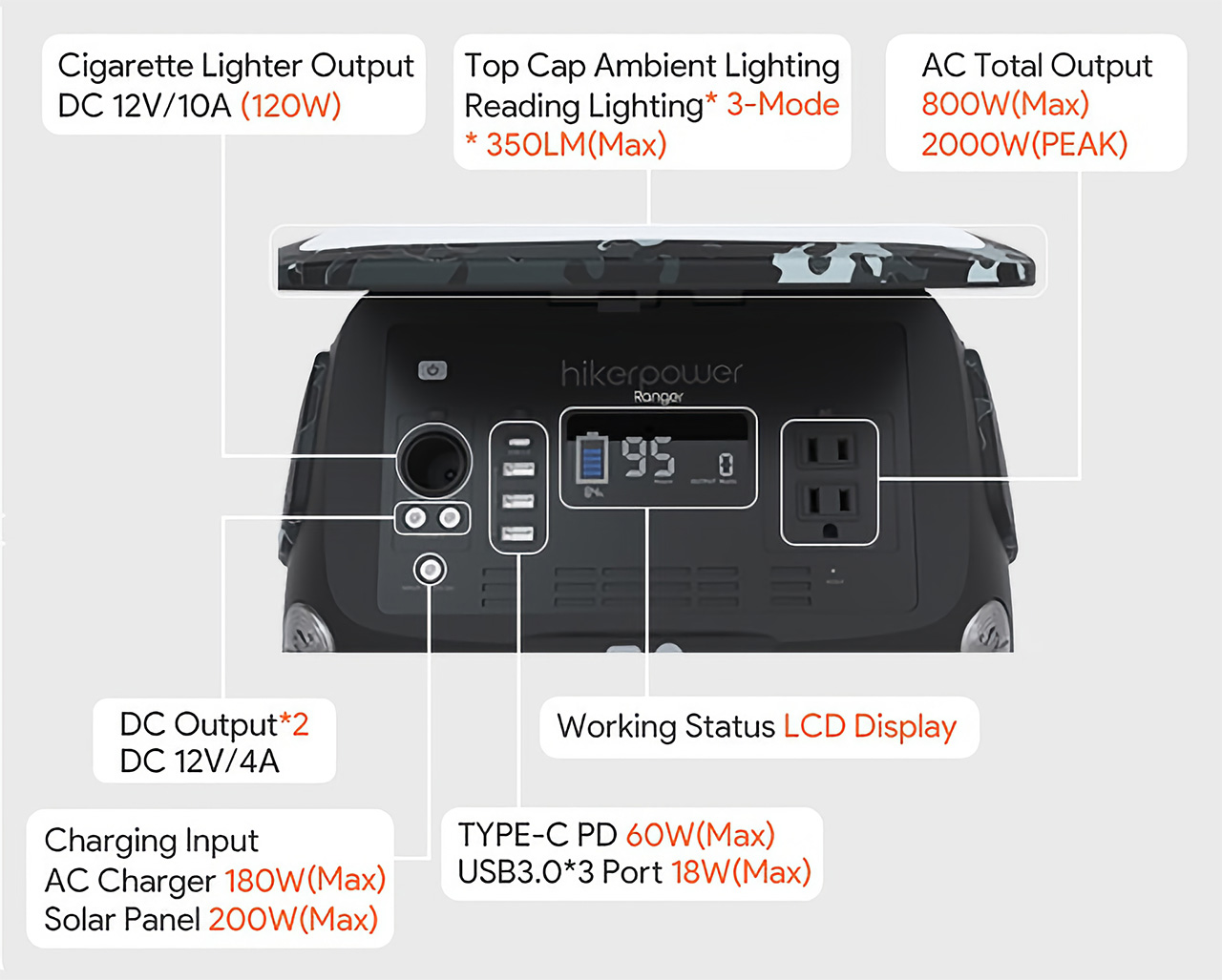 The battery inside Hikerpower can be accessed in a multitude of ways. Flip open its upper flap (which has a built-in LED lamp) and you hit Hikerpower’s mother lode of ports, featuring AC and DC sockets, a cigarette lighter socket (like the one found in cars), 3 USB-A ports, one USB-C port, and a working LCD display that lets you know how much power you’ve got left. To charge the Hikerpower, it comes with an input that either lets you hook it up to an AC power supply, or to solar panels, effectively letting you use renewable energy while outdoors. 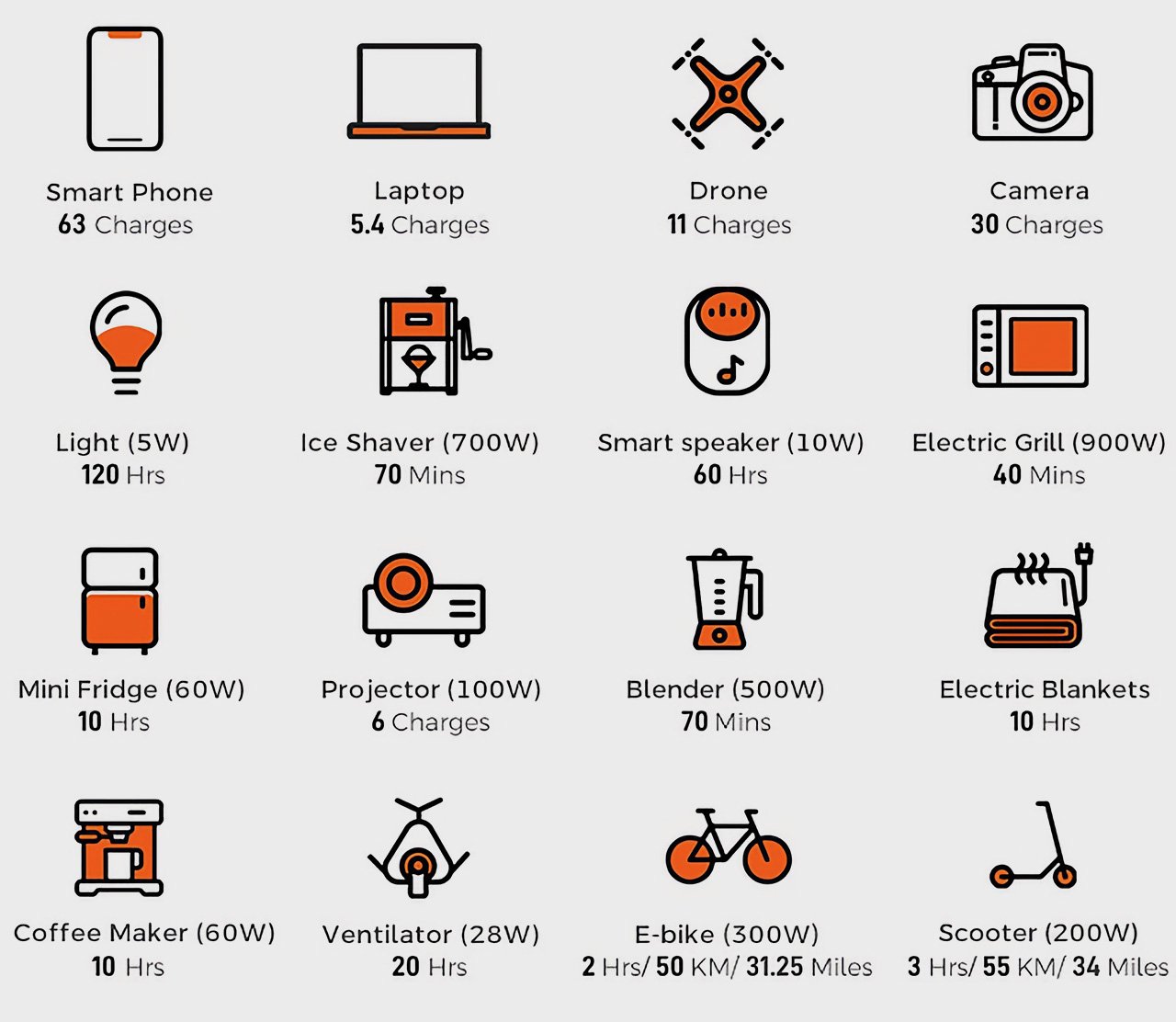 While the most obvious use-case for something like this is outdoor camping, the concept of energy independence goes far beyond just simply living outdoors. Hikerpower can be used by photographers and drone enthusiasts too, or by long-distance travelers who want to be able to charge their e-bike or scooter to expand their range. Moreover, the backpack is just as effective in domestic settings, letting you use items like a leafblower, an electric grill, or even a projector in your backyard without worrying about being near a power socket. The power management system within the backpack allows it to output a max of 2000W, comfortably taking care of practically any power needs you may have while outdoors. 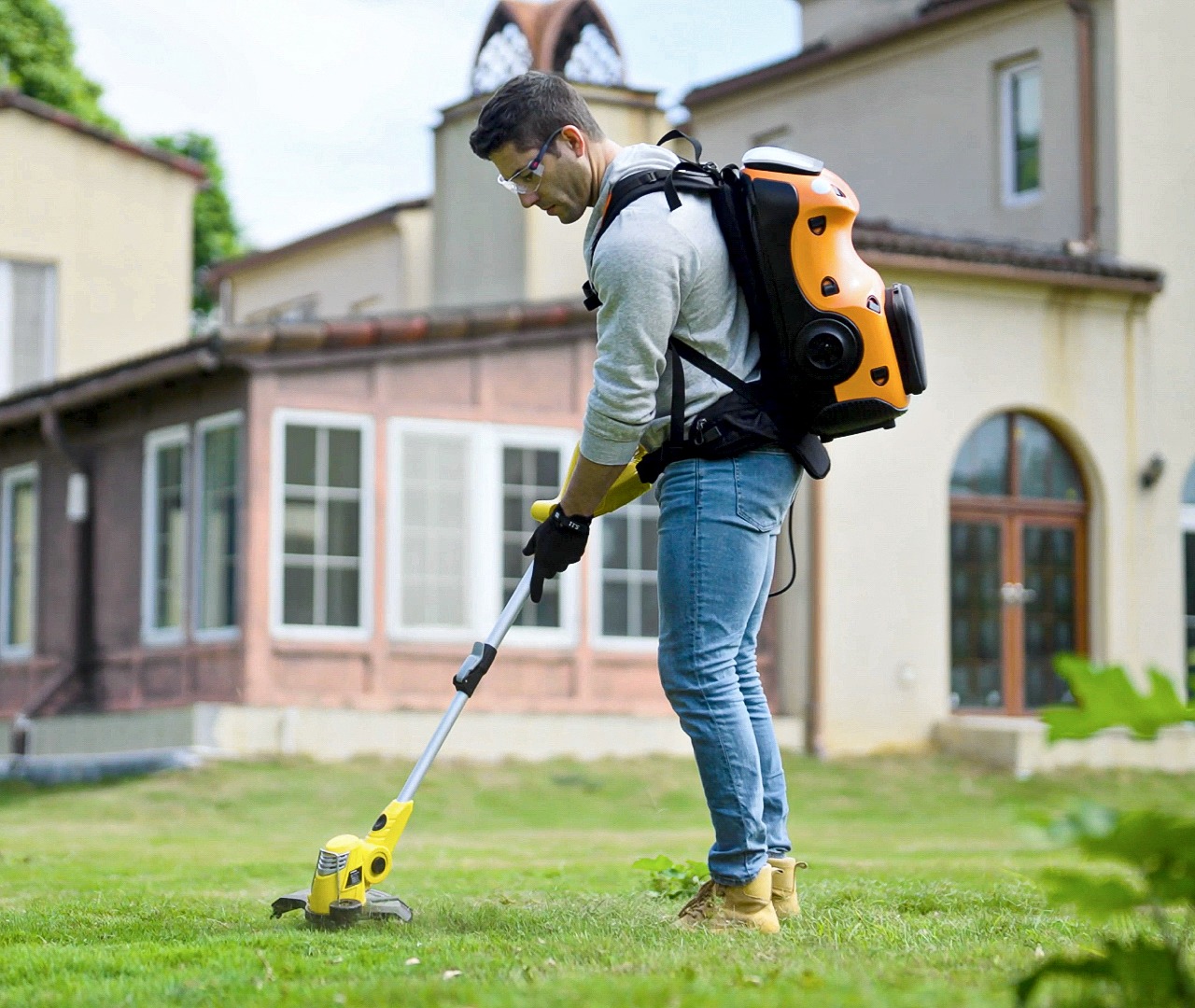 In case of heavy rain, snow, or if you need to wade through water, just pull out the hidden 3D waterproof cover inside the bag and put it on, totally protecting your Hikerpower.

Speaking however, of outdoors, the Hikerpower still prioritizes the outdoor lifestyle. It comes with storage that’s large enough for a few clothes, gadgets, and food, and the backpack’s unusual design also has a concavity on its exterior that functions as a D-hook hanger, letting you suspend tents, sleeping bags, yoga mats, or rolled up solar panels to the bag. Even though it’s more of a portable power station than backpack, it still prioritizes ergonomics, with wide shoulder straps that distribute the weight evenly, lumbar support for your spine, and a mesh-lined back to promote breathability.

The backpack also comes with safety lights (especially useful while riding a two-wheeler) that glow in red, yellow, blue, and green, and even let you activate 3 flashing patterns that serve different purposes from alerting other riders to even functioning as an SOS distress signal. The safety lights are accompanied by a cool LED light panel on the top that flips open, letting you adjust its angle as well as its brightness, making it a perfect ambient outdoor lamp for illuminating your tent or reading. 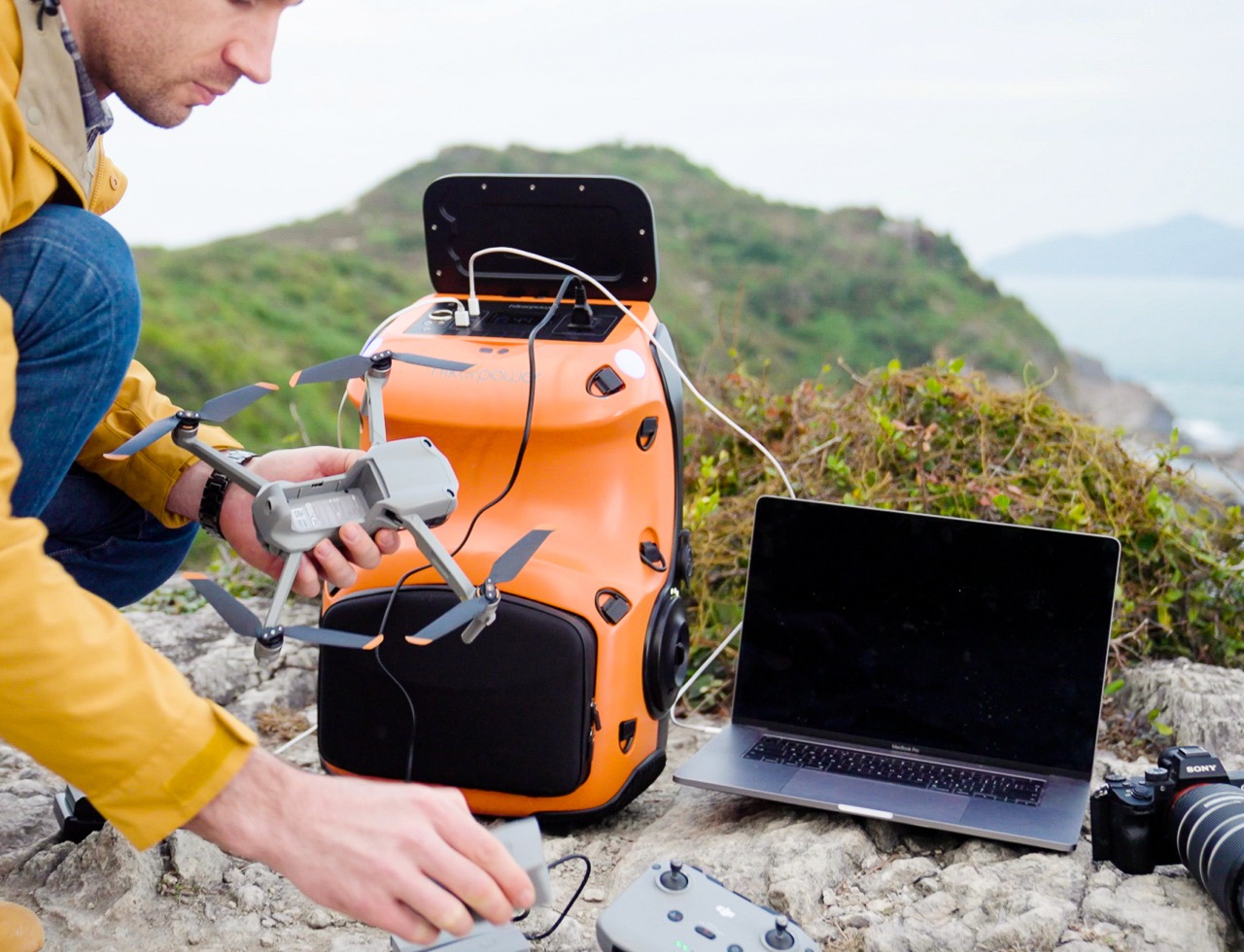 Designed clearly for the outdoors, the Hikerpower comes equipped to deal with any unforeseen problems. The Lithium Iron Phosphate battery cells inside the bag are packed inside an aluminum enclosure that dissipates heat as well as protects the batteries from damage. The power station’s battery management system also takes care of any charging issues with features like short circuit protection, surge protection, overheating, overload, or overvoltage protection, while the backpack itself boasts of an operating temperature range of 14°F to 113°F. To bare the outdoor elements, the backpack even comes with its own waterproof raincoat that slides right around it, creating a protective shield that works in both heavy rain or snow. The Hikerpower comes in two colors for now (Tiger Orange or Camo Black) with a 41% discounted price tag of $699 that also includes a Kickstarter special 2-year warranty on your portable power station.

This Watch has Balls

The limited edition Ringen watch by designer Marc Tran was inspired by the perfect roundness of balls and automotive shapes. The watch is composed mostly…

It’s Raining Pictures From My Shower

When you see a sleek little projector like this Photo Shower, you expect it to be packed with tech-specs and groundbreaking features; but NO! No,…

Camping Products designed to help you achieve all your post-pandemic glamping goals!

A lamp to outshine others

The Suli lamp looks like it was crafted by nature. Nature has a tendency to leave us floored, and this lamp does that effortlessly. The…