With an ominous black orb that dances to the music you play, the Van der Waals speaker should instantly remind you of the alien symbiote that turns Eddie Brock into Venom. The Van der Waals is an orb-shaped audio-visual unit that can be split into two distinct hemispheres – A speaker unit on the back, and a clear cage on the front with ferrofluid suspended inside. As your speaker plays music, its magnetic drivers agitate the ferrofluid, creating perhaps the most otherworldly visualization ever, like a lava lamp from an alien planet. 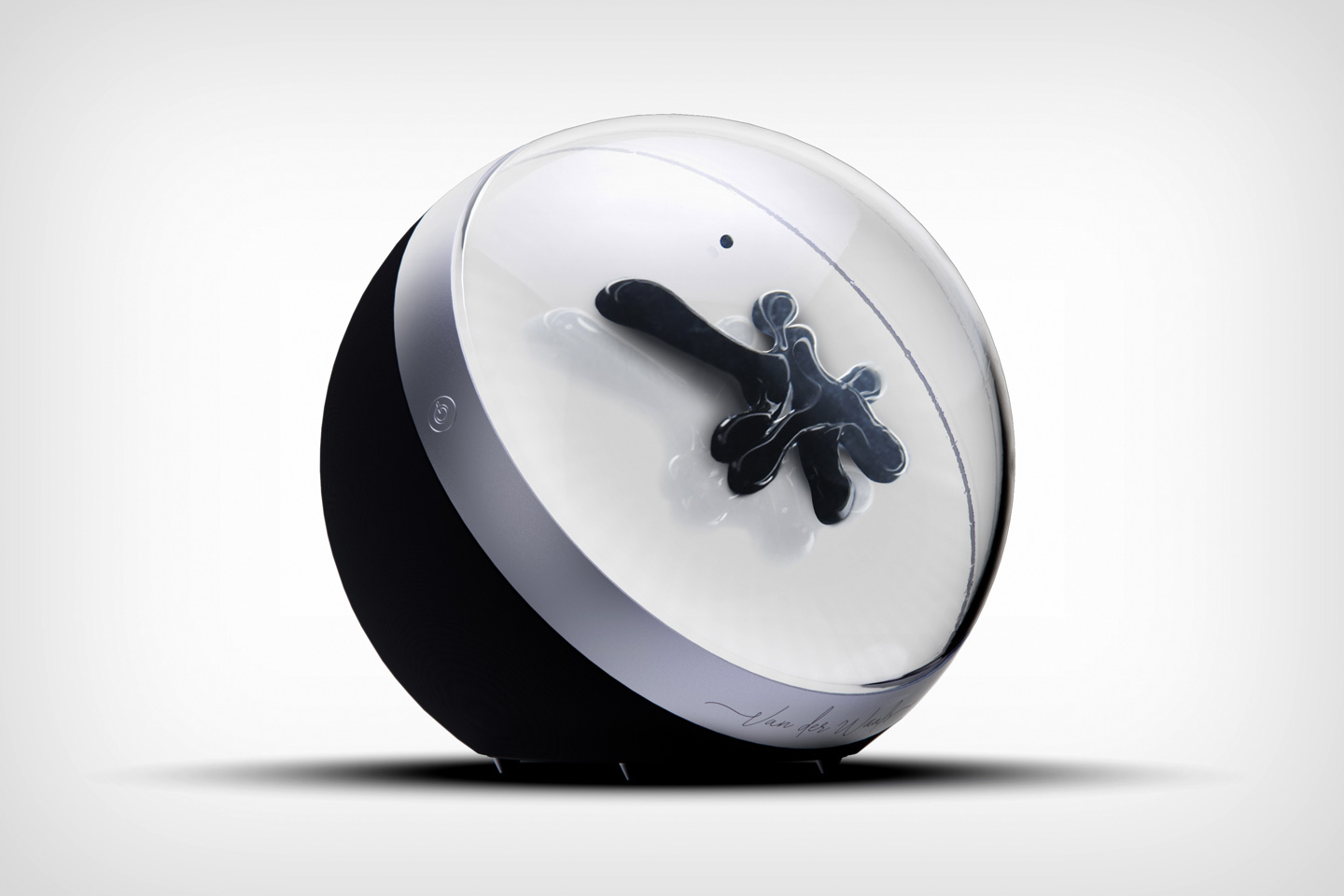 The purpose of this speaker, according to its creator Sergey Kuznetsov, was to figure out a way to visualize music. Sure, equalizers and media player graphics do a pretty decent job… but what if you could ‘see’ music in the physical world? What if those audio vibrations could translate to something much more visually apparent and somewhat tangible? To make this possible, Kuznetsov relied on ferrofluid, a material originally developed by NASA to control fuel in zero gravity. Simply put, ferrofluid is a magnet in liquid form, or iron particles suspended in some kind of liquid base (usually oil). Ferrofluid has a unique way of behaving around magnets – while solid iron particles reorient themselves along the lines of a magnetic field, ferrofluid tries to do the same thing, creating weird dancing spikes and arms that make the fluid look like it’s alive. Place such a fluid in front of any speaker (which basically uses electromagnets to turn electric signals into audio vibrations) and the ferrofluid immediately begins responding to the magnetic fluctuations created by the vibrating audio driver (here’s another experimental ferrofluid speaker from 2020)… in short, you get music that you can literally see.

The speaker’s name comes from Dutch physicist and Nobel laureate Johannes Diderik van der Waals, who worked broadly within the field of theoretical molecular physics. In a way, the speaker is a tribute to his work, given that it explores molecular behavior in its own unique way. The speaker’s orb-shaped design feels almost scientific too, like how molecules always show spherical atoms. While that may be splitting hairs, the Van der Waals is definitely an impressive combination of science and design, wrapped together in a product that looks hypnotic and sounds pretty good too. 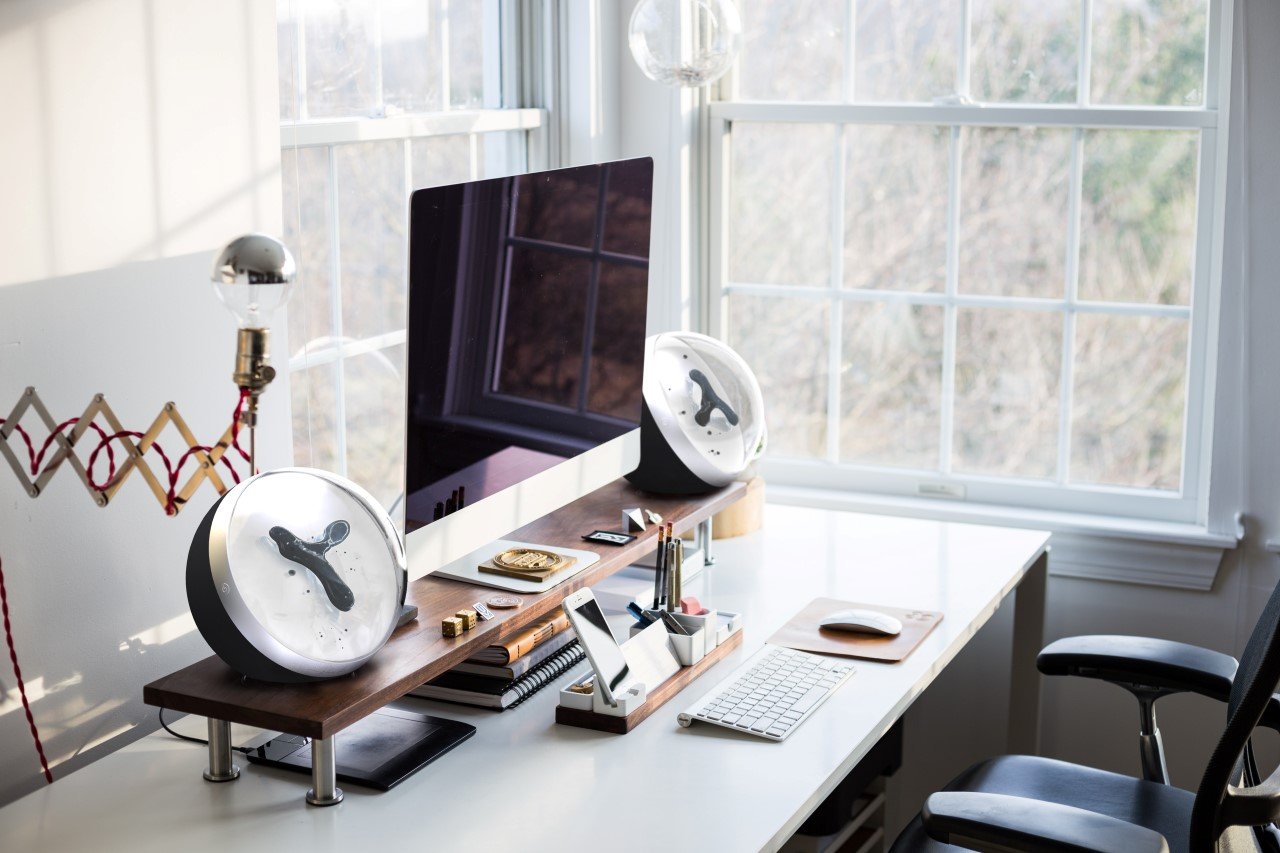 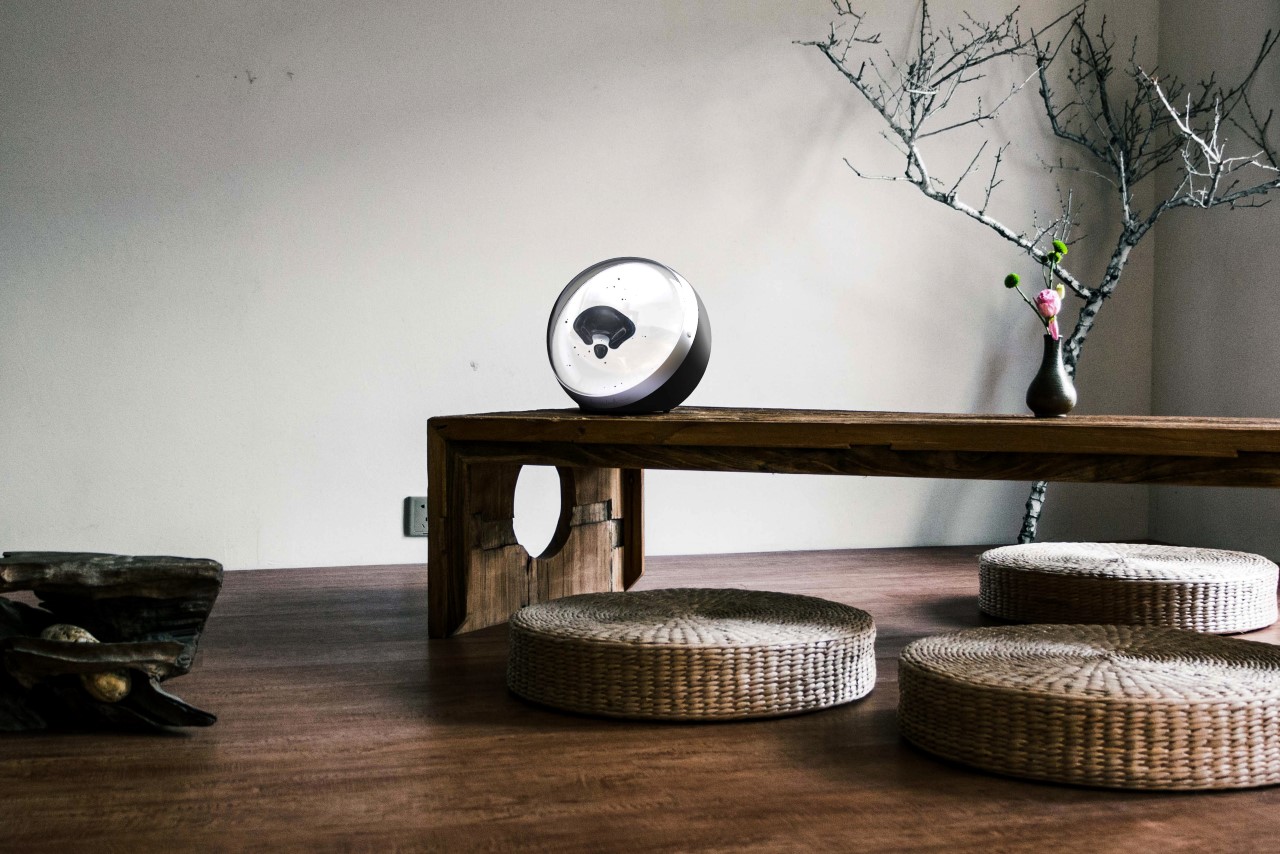 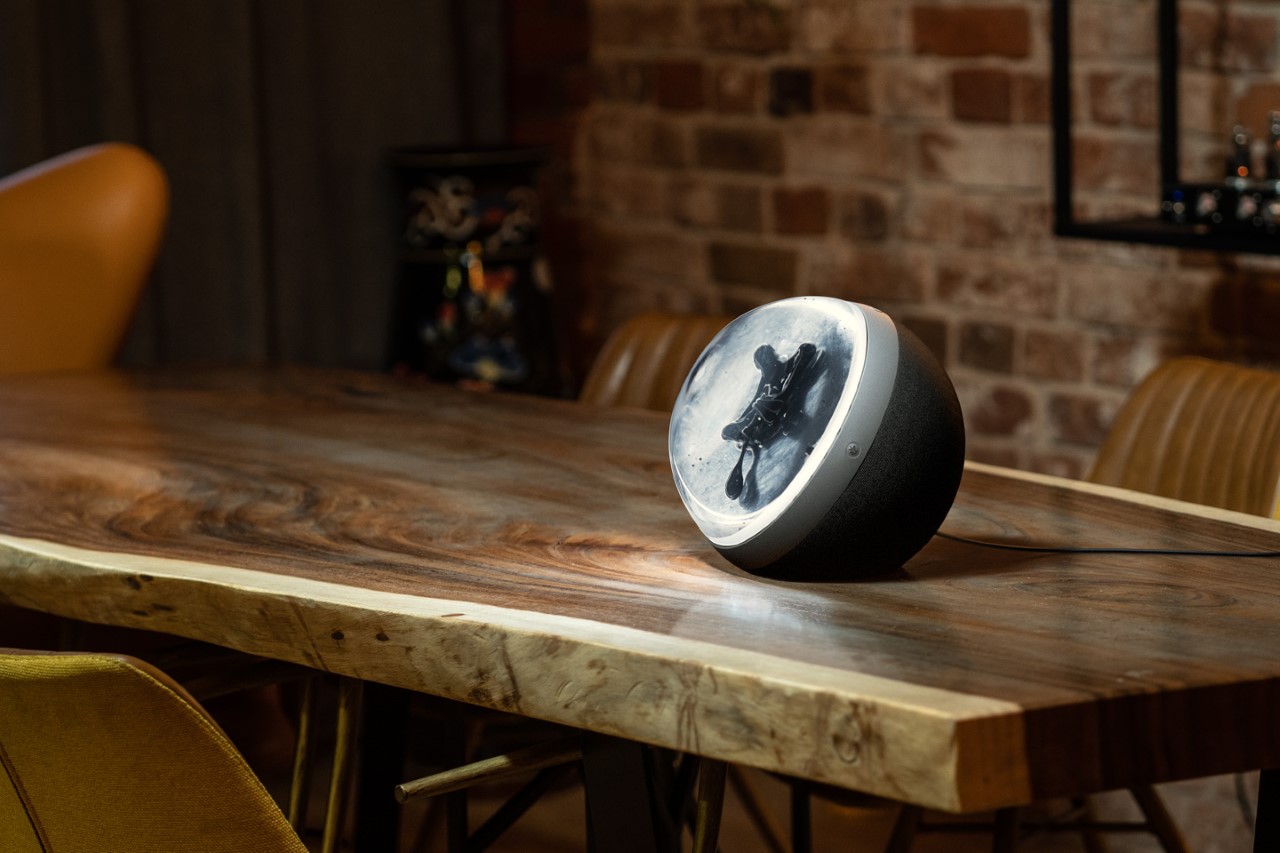 Given its mesmerizing ferrofluid chamber, it’s easy to forget that the Van der Waals is, in fact, a speaker too. The rear part of the orb-shaped device houses an array of 4 audio drivers (two 15W mid-bass drivers and two 15W tweeters) and a passive radiator at the bottom of the speaker unit. Together, they give the Van der Waals sheer audio firepower, allowing it to have punchy basses, rich mids, and crisp highs. For a speaker that looks like it’s from another galaxy, the Van der Waals prides itself in sounding out of this world too! Meanwhile, a dedicated electromagnet agitates the ferrofluid on the front, making it match the kind of music you play. Queue up some Vivaldi and the ferrofluid gracefully warbles to the sound of the violin. Play some Slipknot and the fluid goes absolutely batshit bonkers, dancing around as if it was possessed. 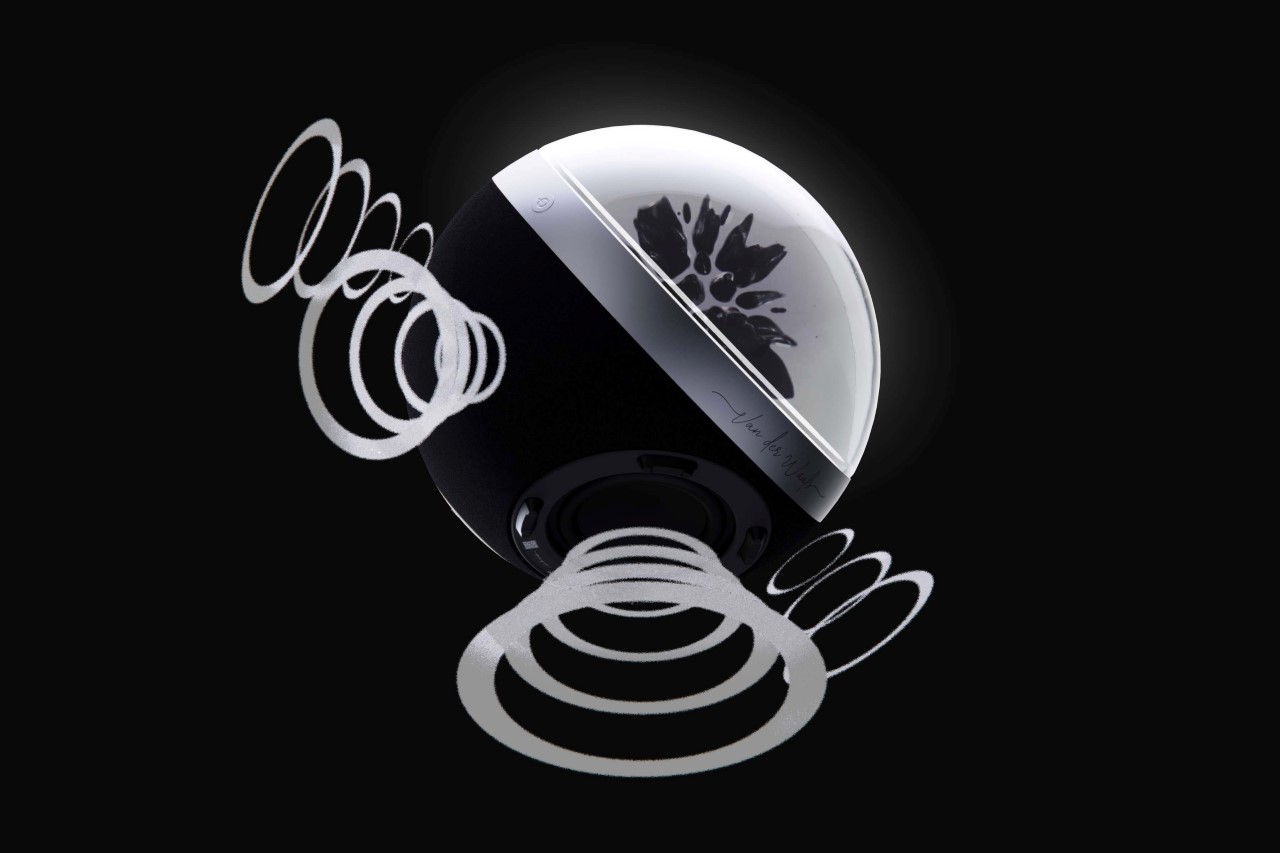 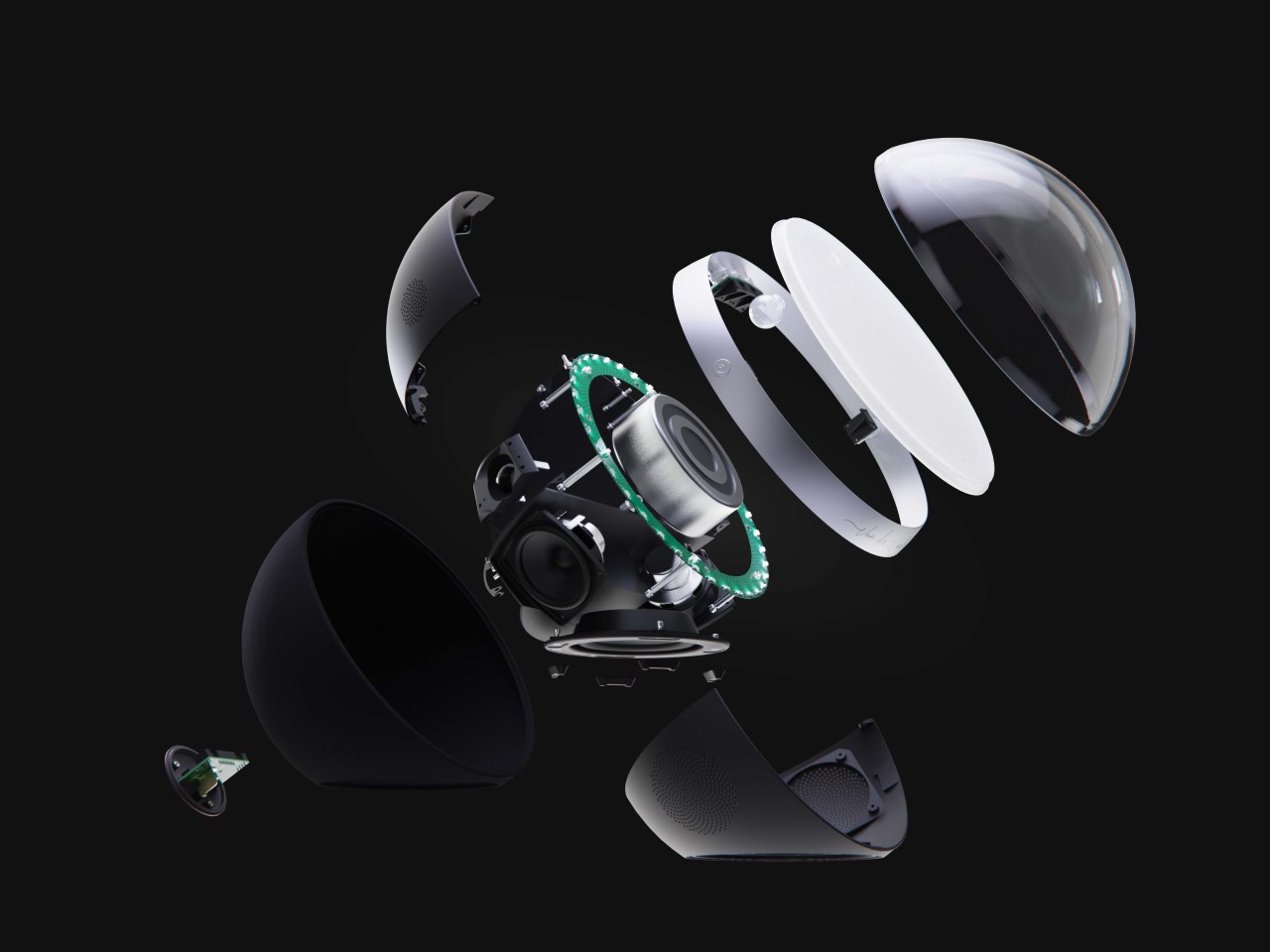 Functionally, the Van der Waals is just like your regular wireless speaker, albeit with its own twist. You can hook your devices to it via Bluetooth 5.1, or even connect the speaker to a playback device using its aux input. There’s an aux output too, allowing you to hook multiple Van der Waals together to create an army of audio-excited alien amoebas, and finally, a USB-C port to power the speaker. A matte metallic rim around the speaker houses its controls, from power and Bluetooth buttons to volume controls and play-pause buttons. Sadly, the Van der Waals isn’t a smart speaker, which would complete the illusion of having a sentient creature living inside your speaker and communicating with you. Maybe Sergey Kuznetsov will build Alexa or Google Assistant into his next ferrofluid project!

The Van der Waals speaker is pretty large, measuring 9.8 inches in diameter (that’s bigger than a standard soccer ball) and weighing a substantial 11 pounds (5 kilos). Makes sense given that it’s less of a speaker and more of a kinetic sculpture with audio capabilities. Its larger-than-life presence makes it a perfect accent piece for coffee tables, TV units, or even workspaces, and its commanding aura immediately grabs your attention (unlike most smart speakers that sort of just blend into your home decor). Moreover, it even comes with an LED backlight built into its ferrofluid chamber, so you can watch your alien symbiote dance at night too!

You can grab the Van der Waals speaker on Kickstarter for an Early Bird price of $399. However, given how complex the tech is (especially when you consider mass production), the Van der Waals is prone to a lot of technical refinements and won’t begin shipping before November 2022. 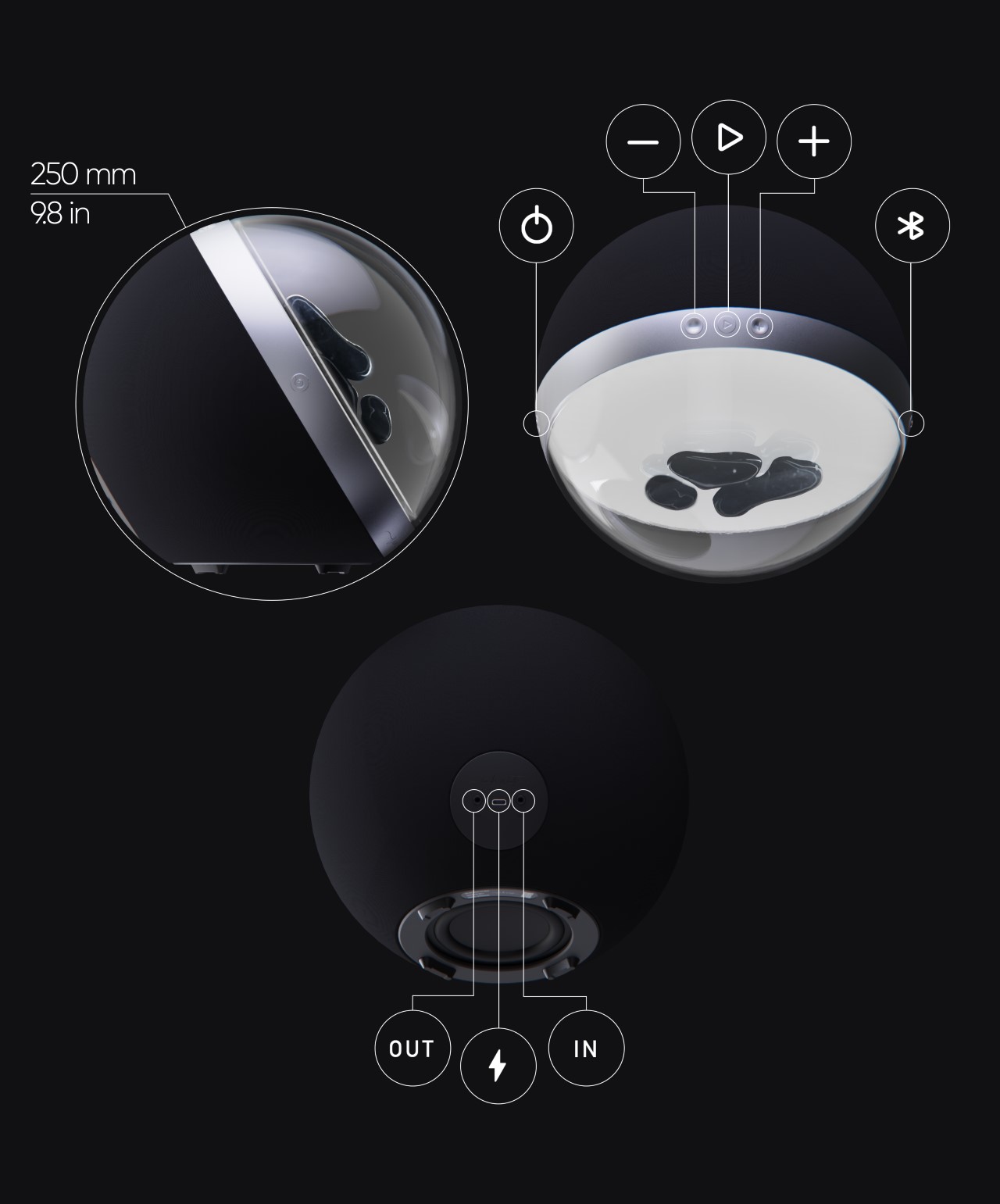 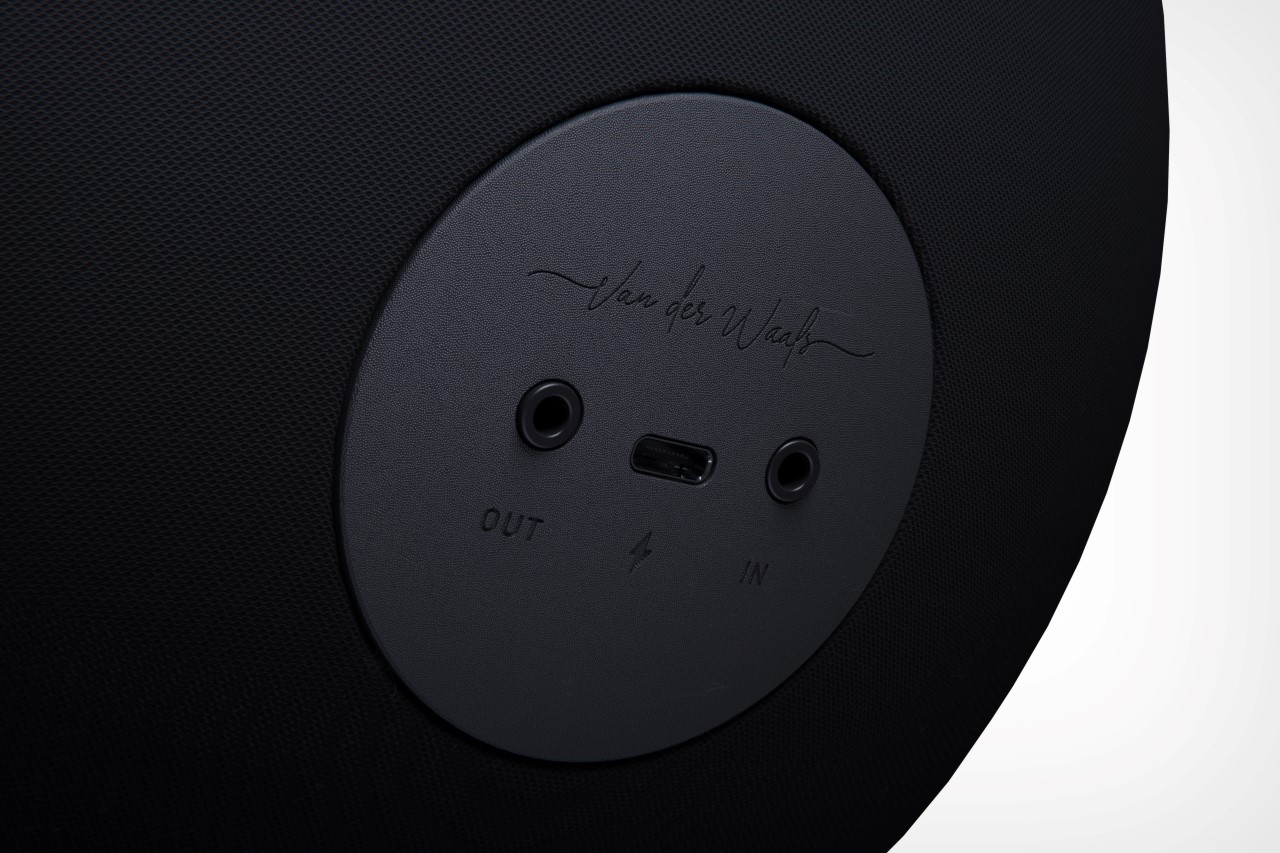 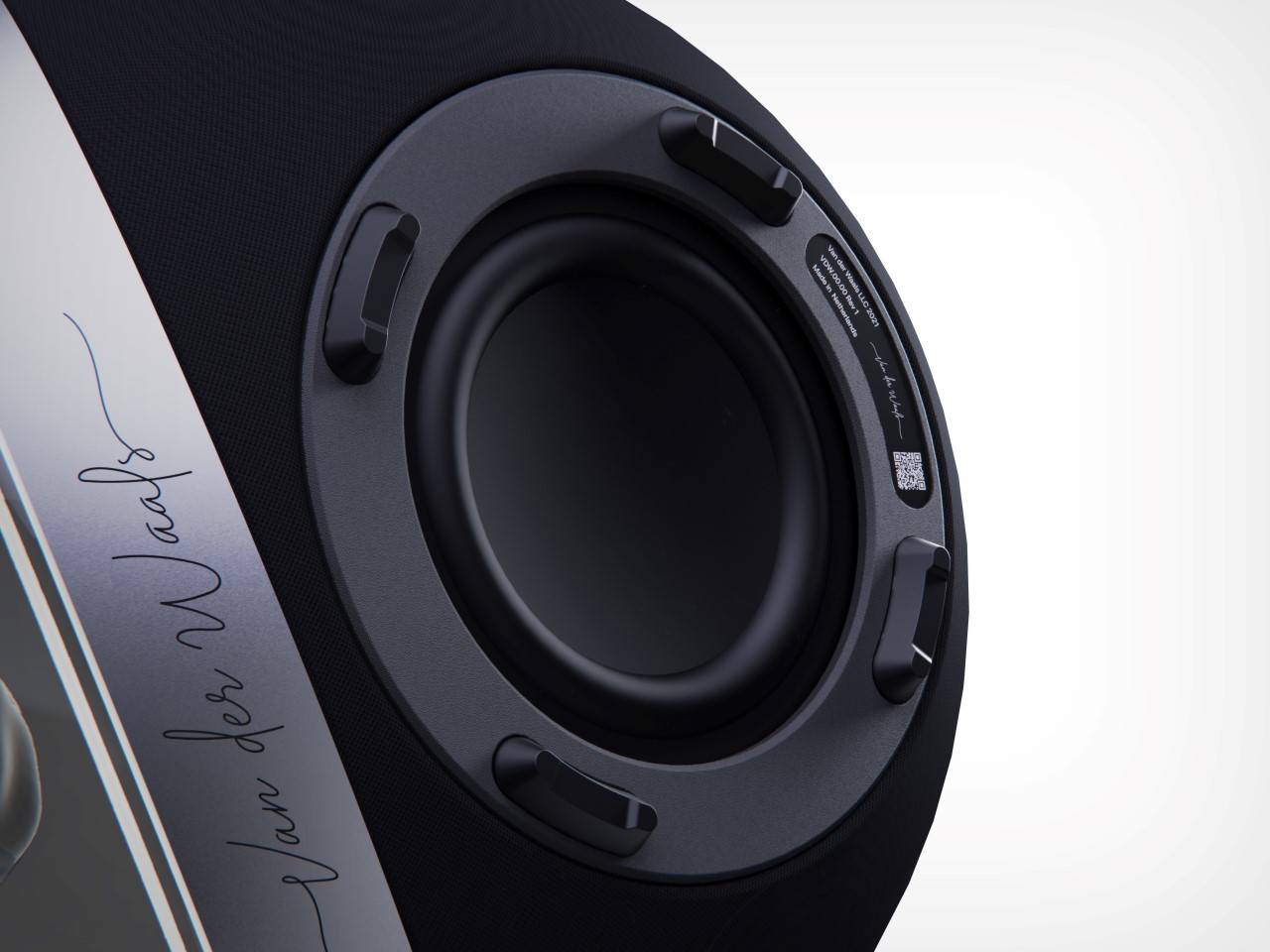 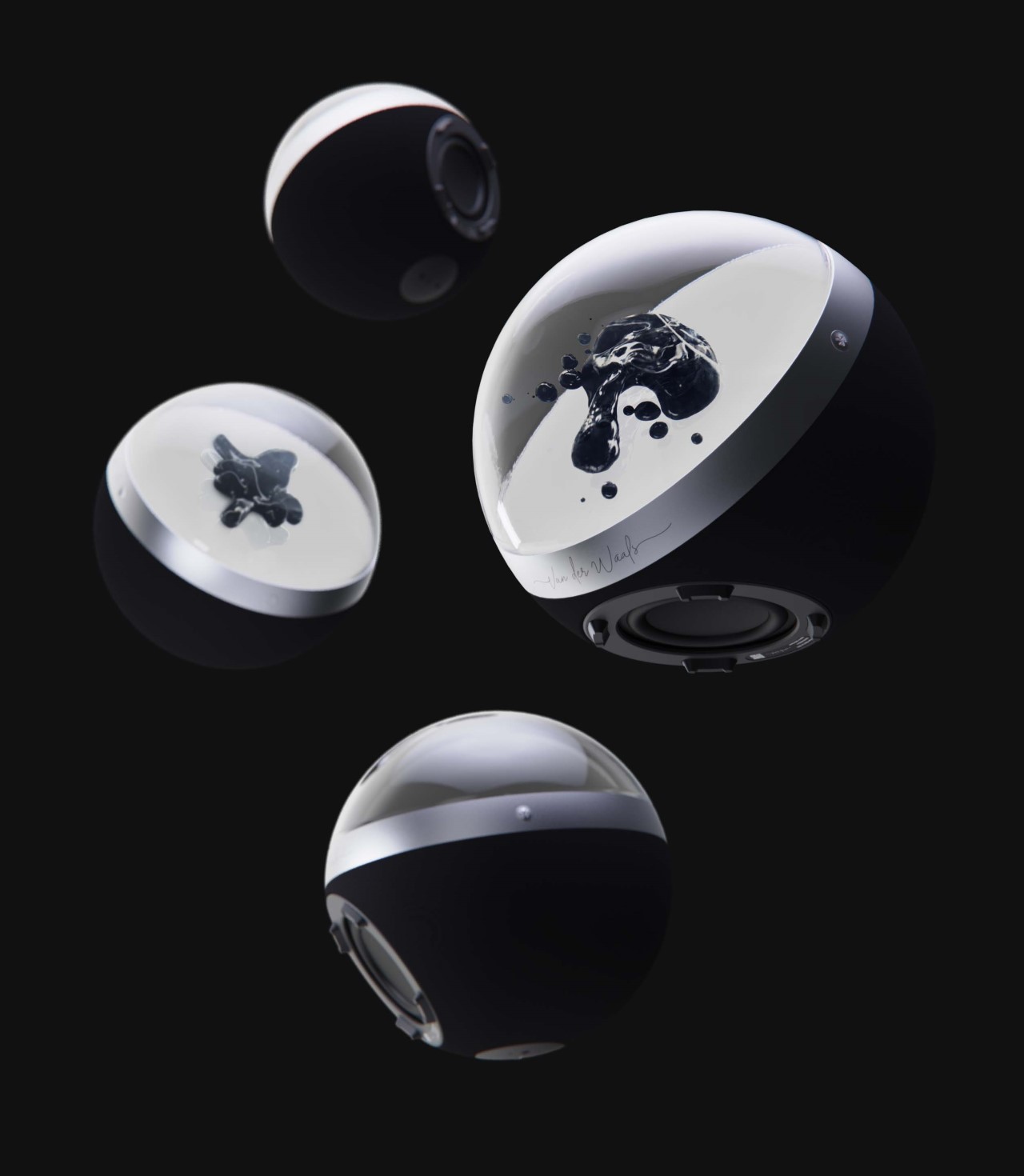 Giraffe necks and “height” of creativity may just be my weakest pun ever, but isn’t this giraffe-inspired measuring tape just adorable? Miss Meter, as it’s…

Have you wondered why most aliens depicted in Sci-Fi films and TV series just happen to conveniently speak English? It’s sometimes a strange coincidence, sometimes…

There’s a blank wall in your home, it’s poorly lit so a large photograph won’t do, its hard to find the perfect painting to suit…

https://www.kickstarter.com/projects/billy-chester/the-wesn-allman-everyday-carry-pocket-knife The WESN Allman takes on a pretty bold task of perfecting one of the most already-beloved quintessential knife designs. The classic drop-point flipper. One…