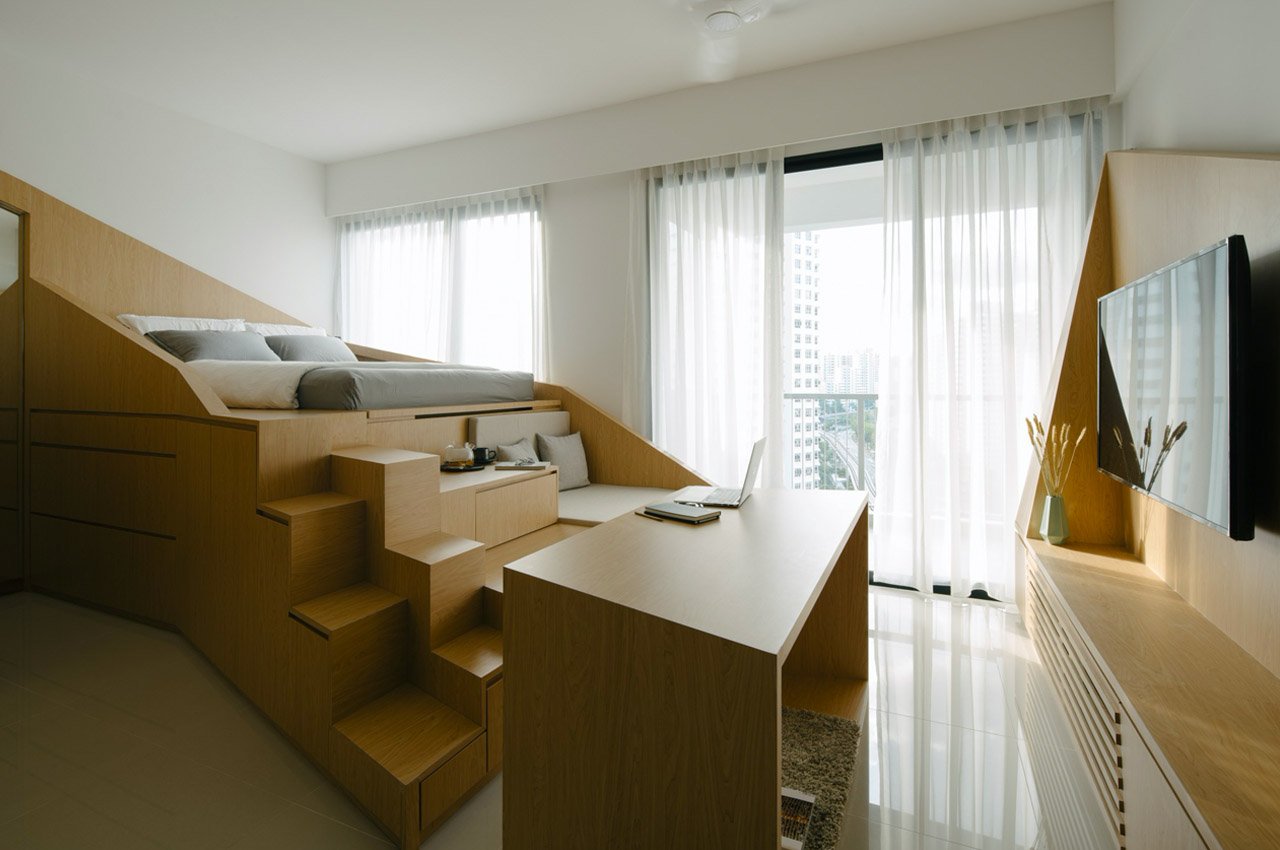 Living in a big city is all fun and games until you realize space constraint is a major all-too-real issue. Finding a modern functional apartment with adequate space and up-to-date facilities is a Herculean task, and if you find one, then you’re definitely God’s favorite. But for the all too unlucky ones, who end up with a cramped apartment, it’s always a great idea to add some smart space-expanding elements to your home!

One such example is Metre Architect’s ‘Gradient Space’. The 43 square meters studio apartment is owned by a young client, who loves having friends over, and also requires sufficient space to store her clothes, accessories, and other equipment. To create an apartment that can meet the client’s specific needs, Metre Architects set out with a plan! First and foremost, they added a glass wall, that separates the living and sleeping area from the kitchen. This prevents noise from the hallway from filtering into the kitchen, and any cooking smells from entering into the hallway. 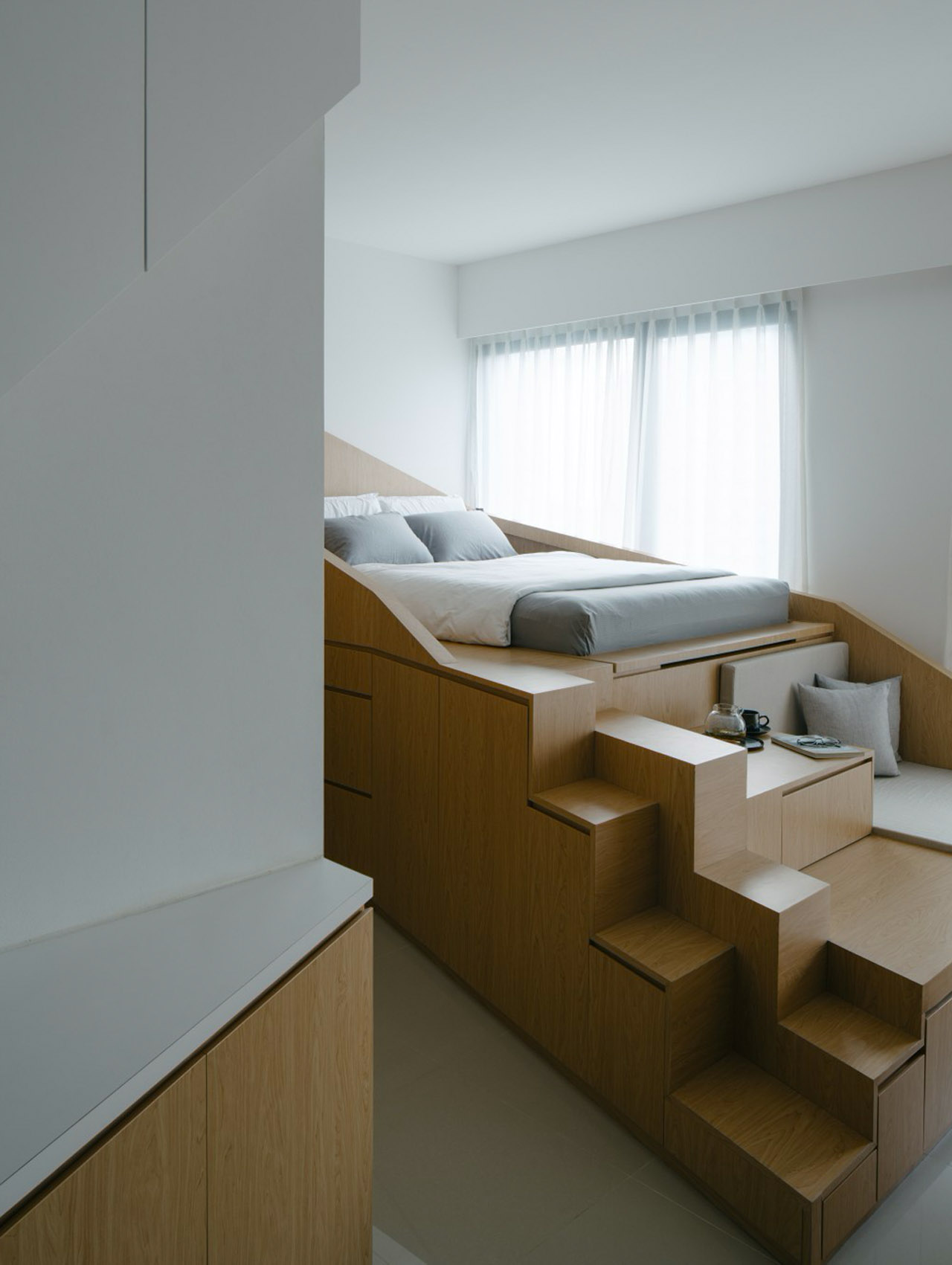 The most significant addition, however, was a sculptural landscape, that serves as a bed, seating, and storage. The furniture/sculpture looks like it is cascading down the wall like a waterfall! The multifunctional design features multiple ‘gradients’ that can be used in various ways. 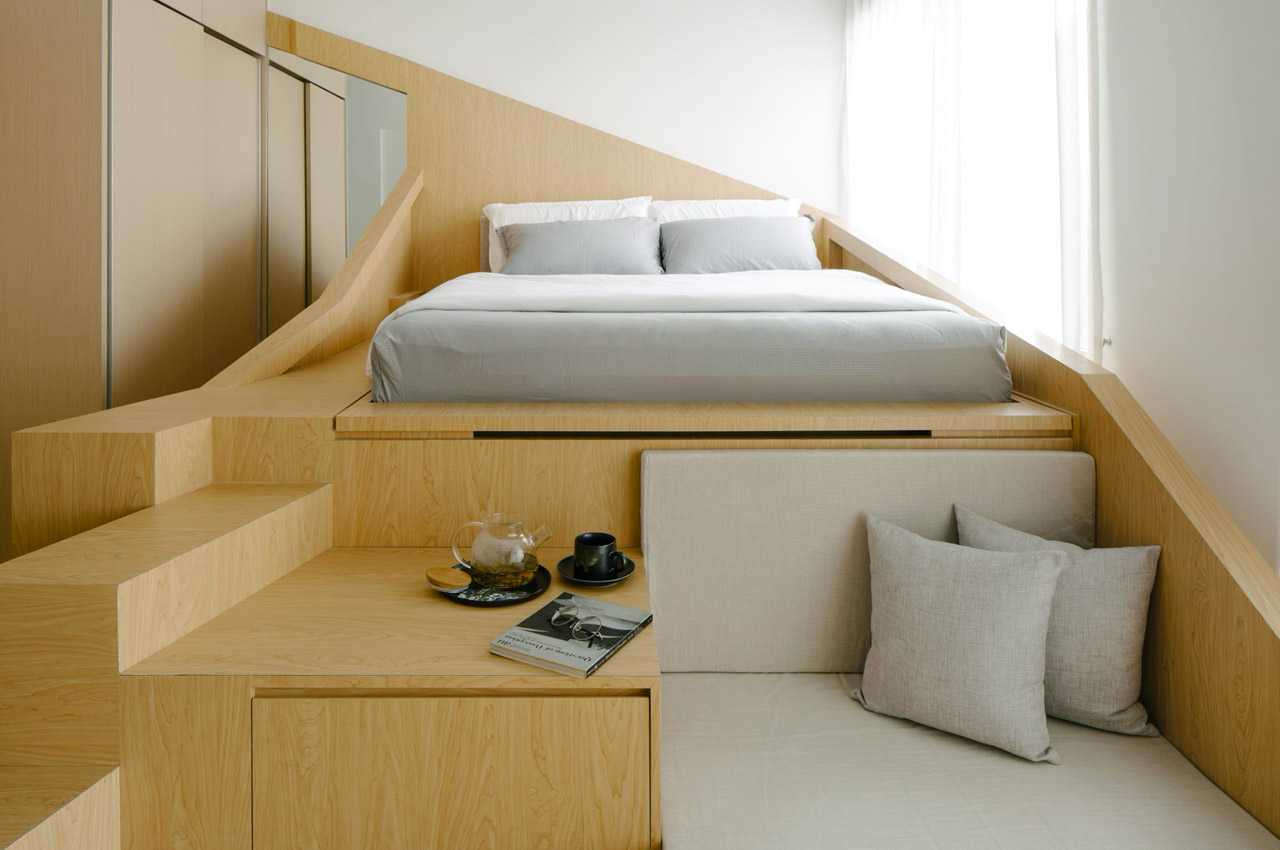 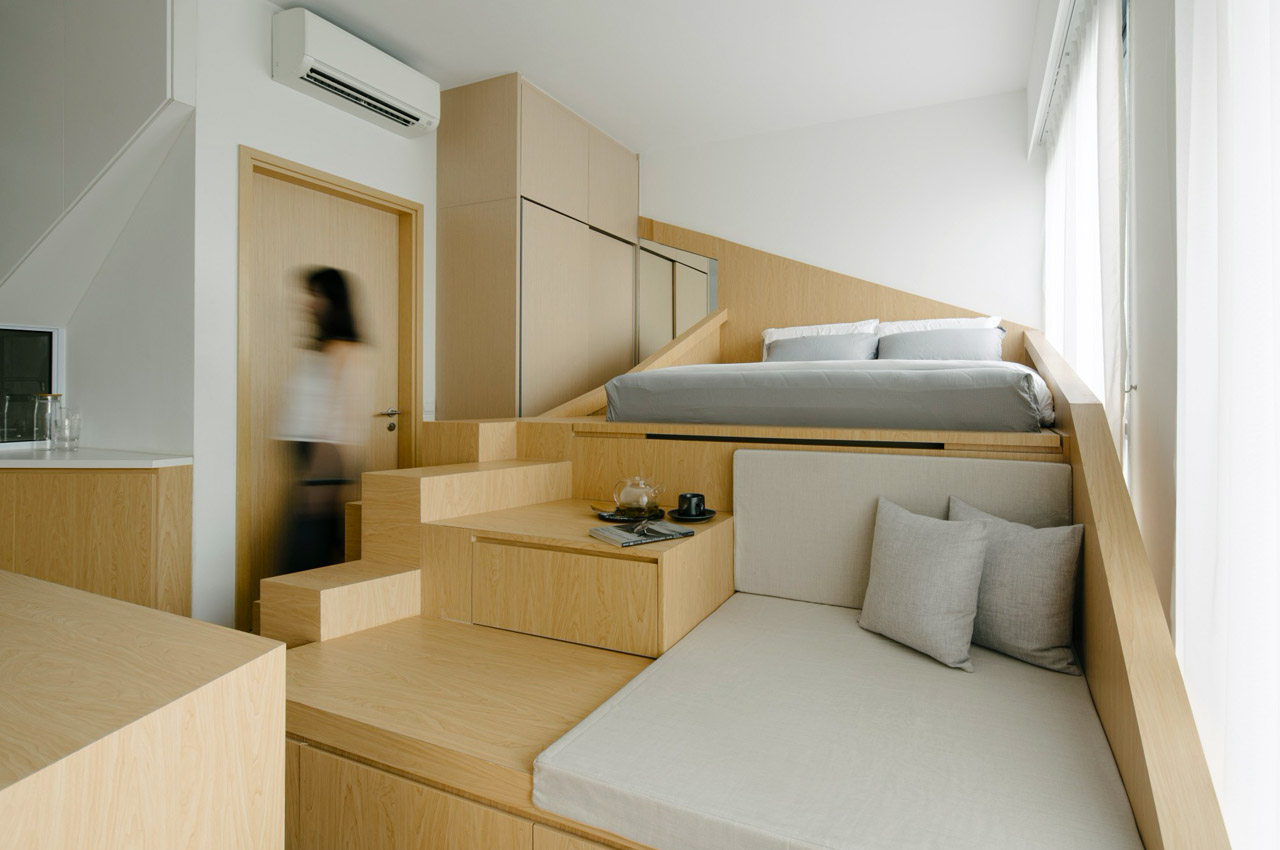 The lowest level of the sculpture is equipped with an upholstered seating area, an integrated side table, and an extra surface for a guest to sit on. The client can lounge about and work on the seating area, or binge watch some Netflix on the television screen mounted on the opposite wall. 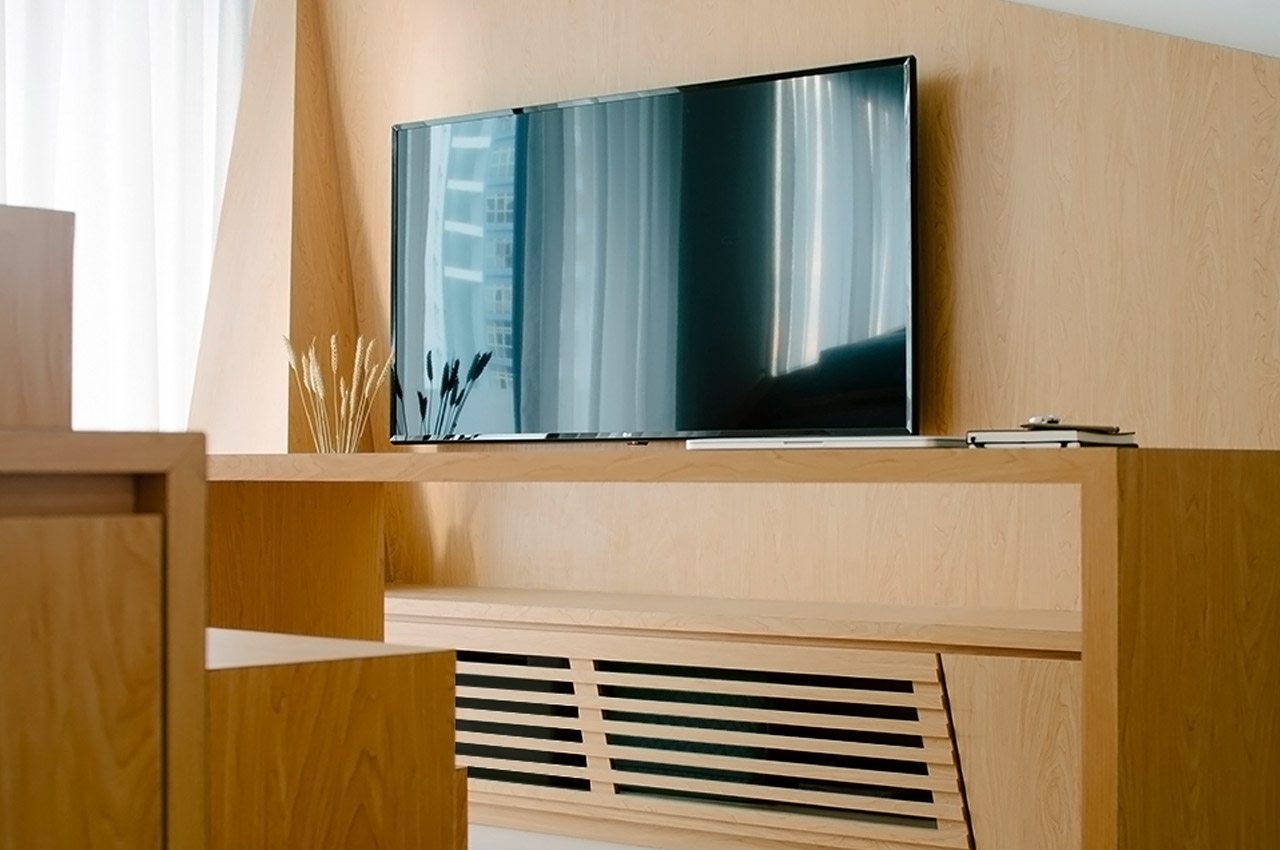 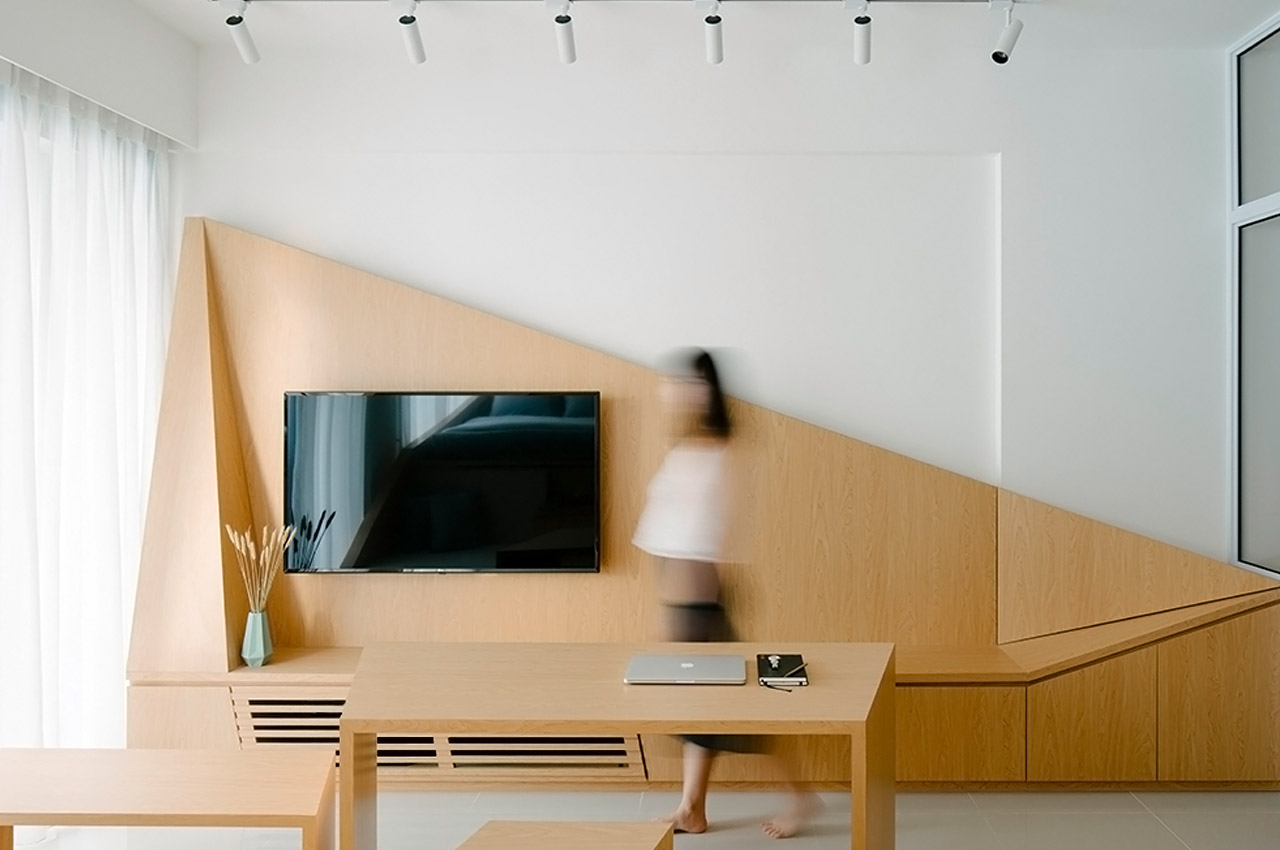 A large table has been placed in front of the seating area, that one can work or eat on. A custom-made bench can be pulled out and sat on. 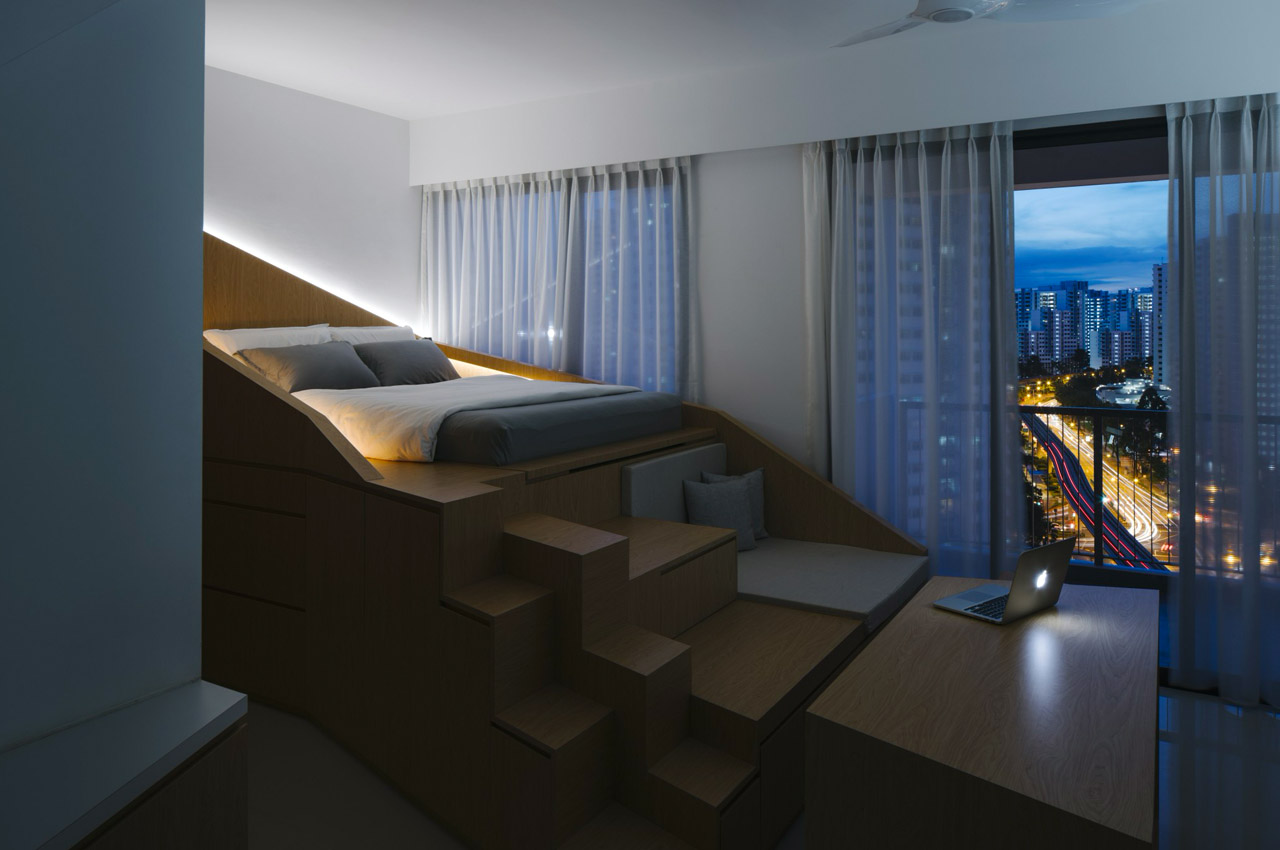 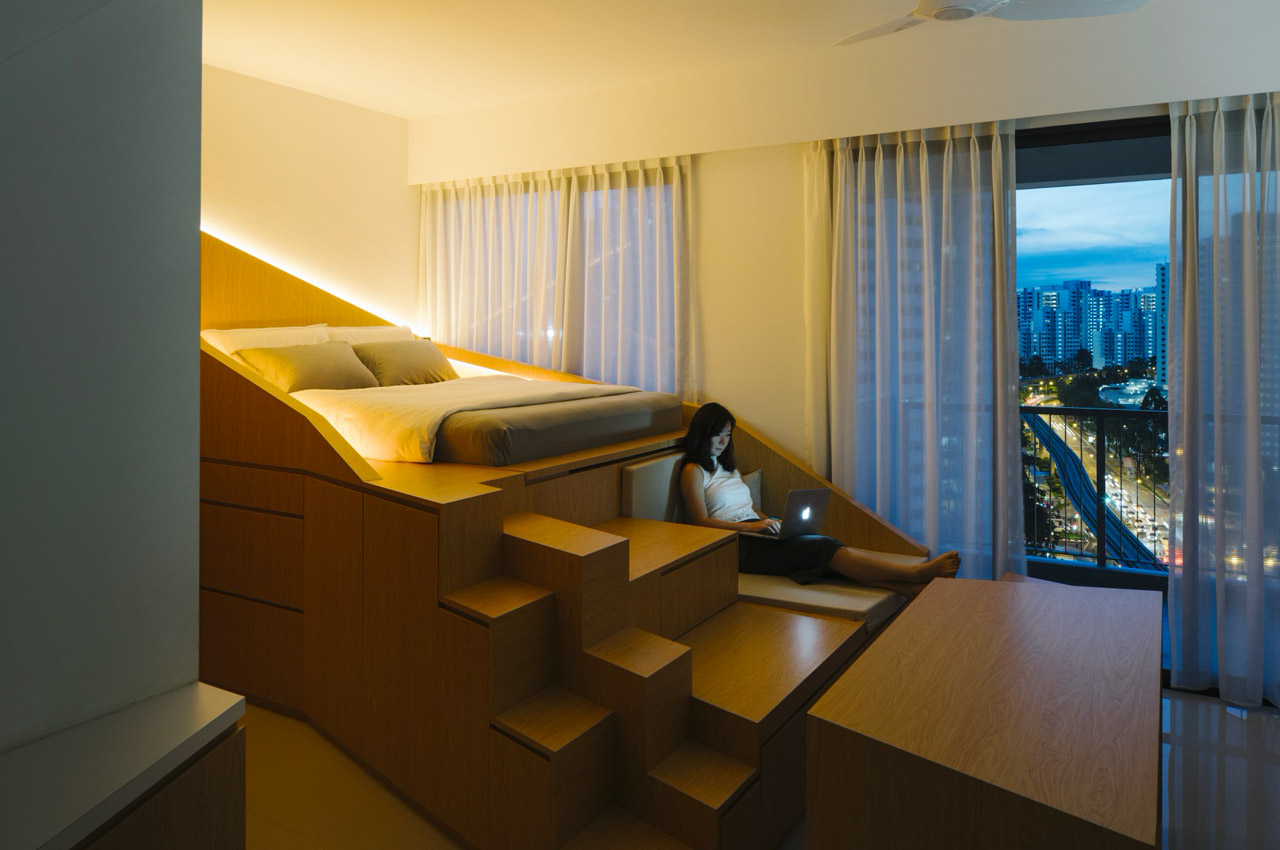 A built-in miniature staircase is located next to the seating area. The alternating steps allow the client to slide into bed, while also functioning as extra seating space for when she has guests over. 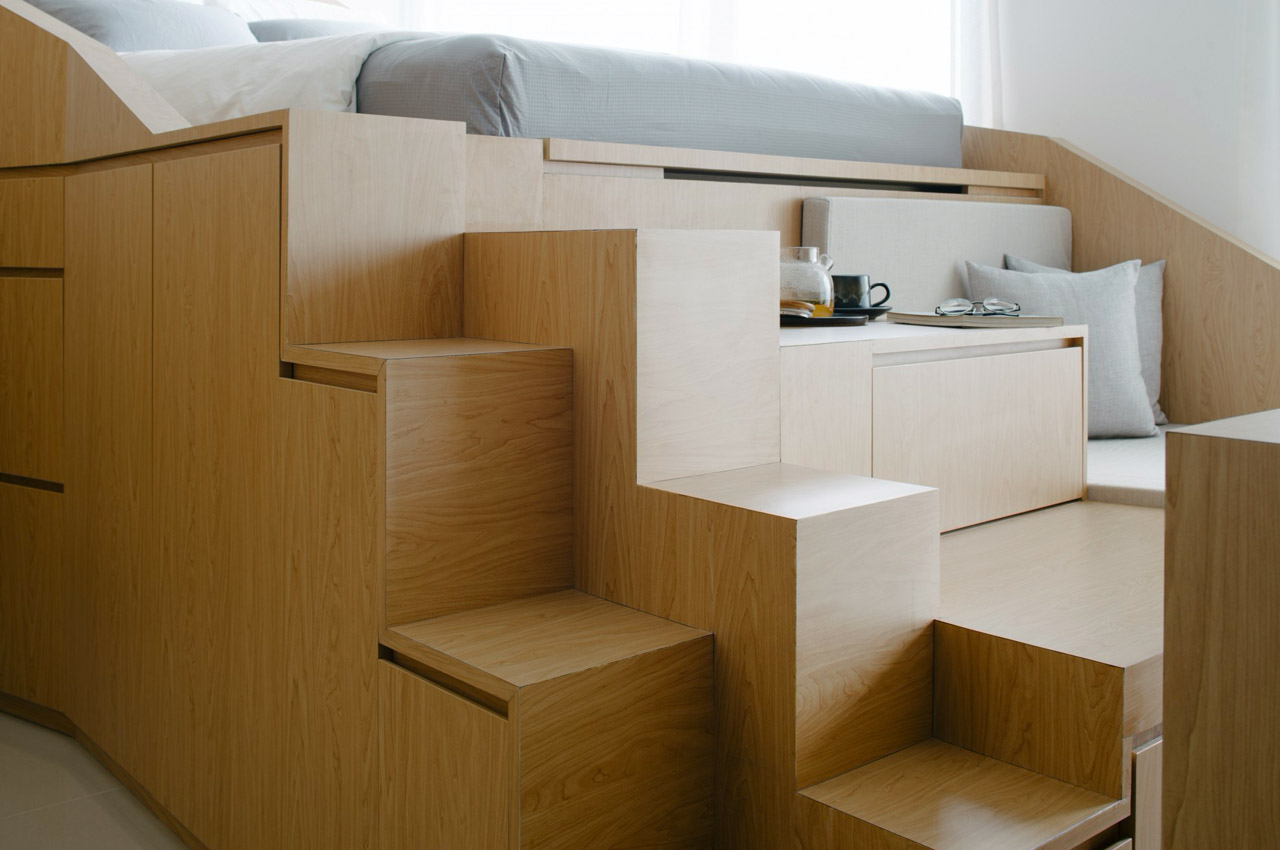 This mesmerizing sculpture has been equipped with plenty of storage space! Hidden cabinets in the stairs, large drawers artfully placed underneath the bed, and built-in storage sections under the television set all function as smart storage facilities! In fact, you can lift up the bed to reveal a small hidden storeroom as well.

The client says, “Sometimes at night, I will just sit here [on the balcony], enjoy a cup of tea, and play with my iPad. Even though it’s a very small apartment, it can be adapted to whatever the situation is.” Design interventions like the Gradient Space can completely transform modern-day apartments. They don’t necessarily have to feel small, with innovative and smart additions like these. Gradient Space is a major lifesaver for modern homeowners! 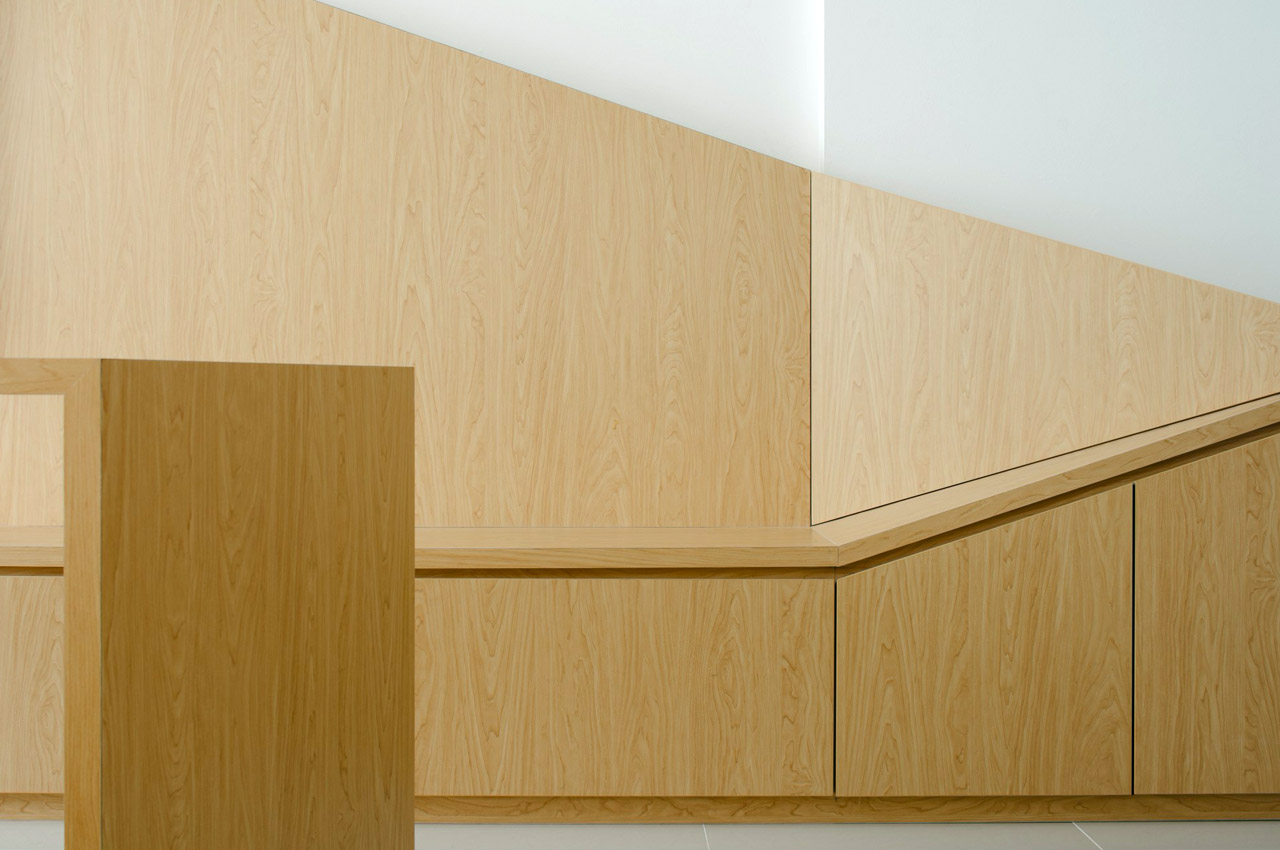 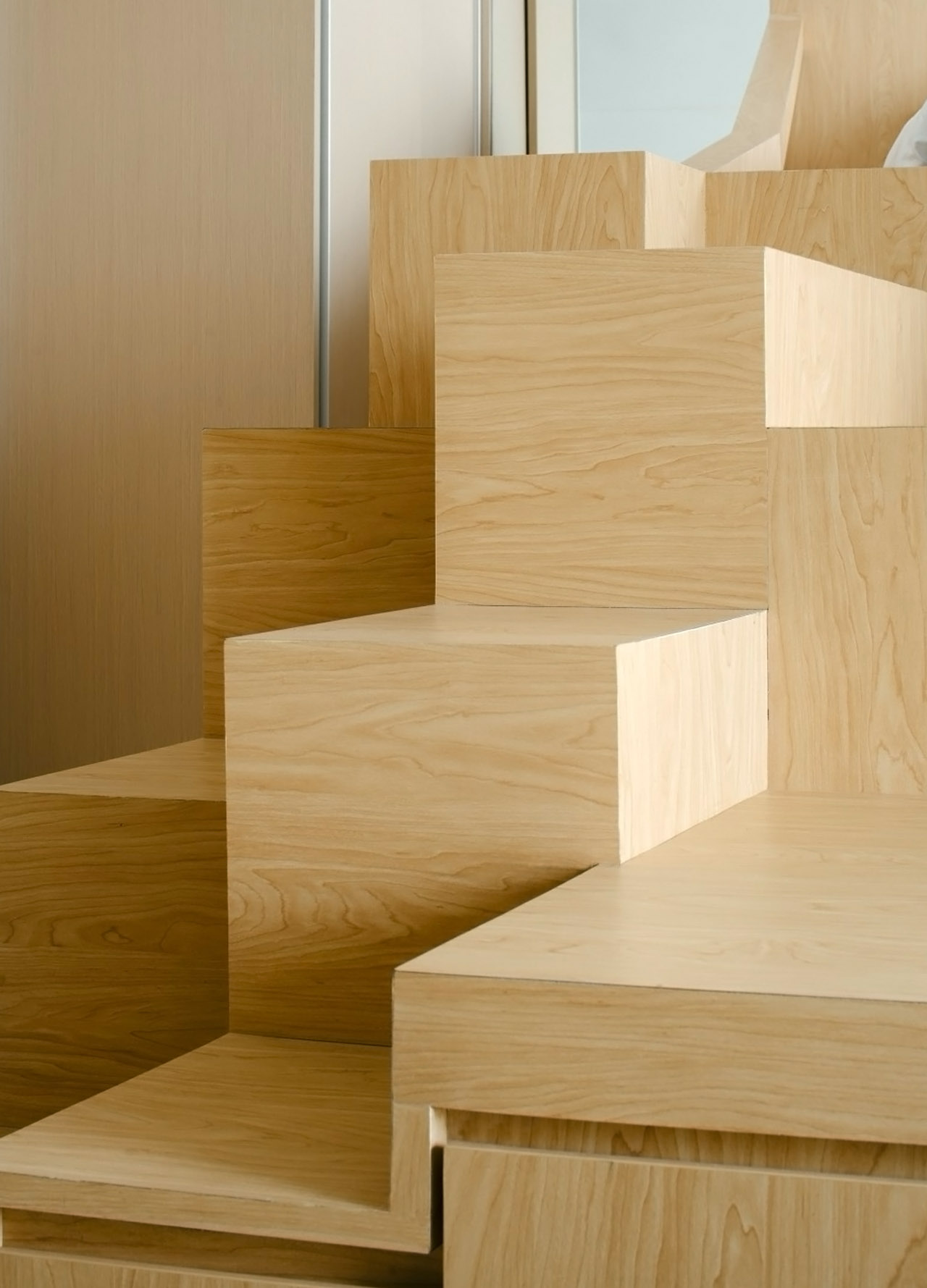 WaterAid and Arup’s drawing water challenge to find new ways to deal with water and sanitation issues has come up with some potentially winning ideas….

Chair Brought to You by Smarty Balls

Jenagh, in Farsi means sternum; the flat bone shaped like a capital ‘T’ located in the center of the chest protecting the heart and lungs….

The Turbine Bridge concept is a hydroelectric power station that also serves as a multifunctional space on Amsterdam’s Amstel River. On the main internal level…