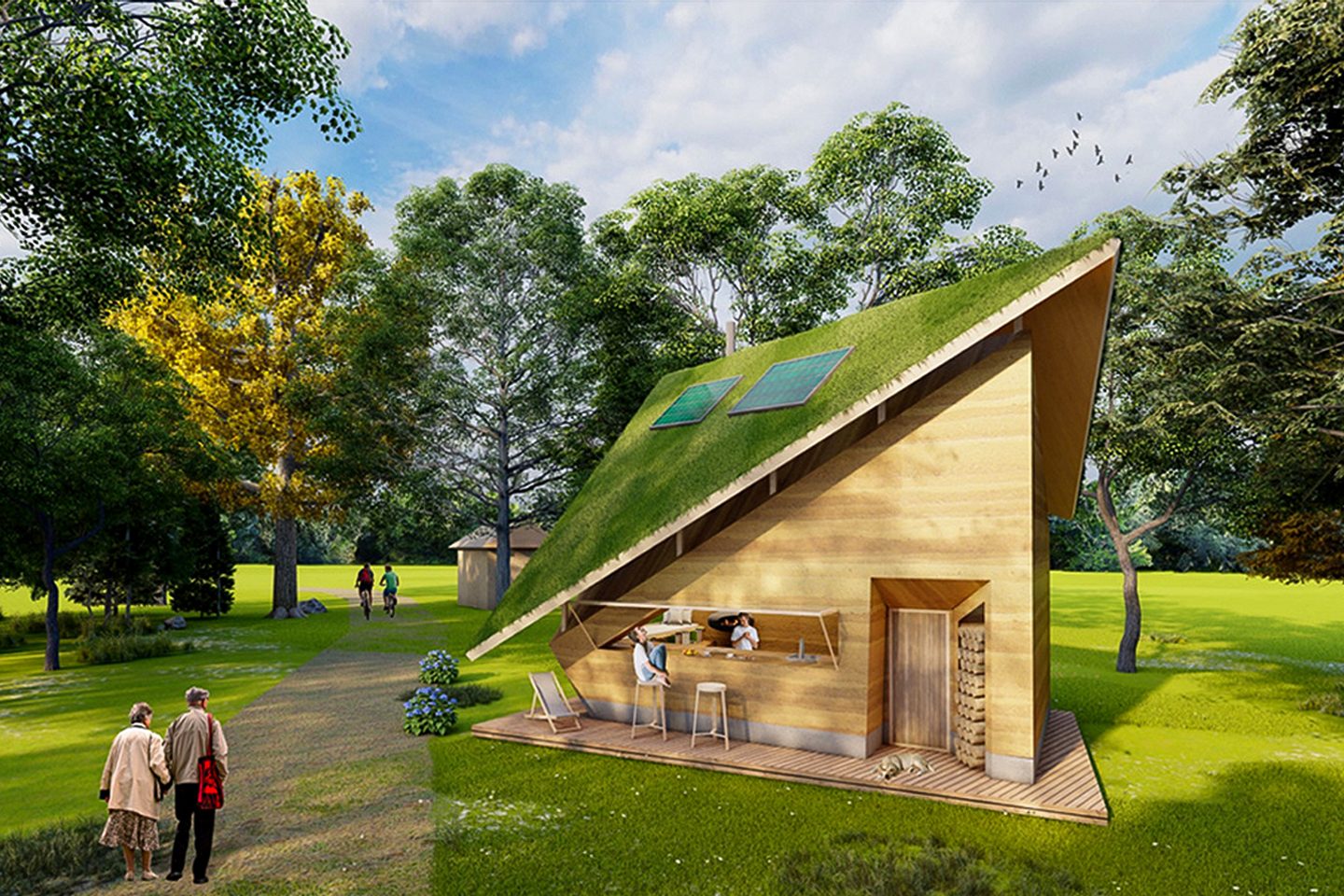 Rammed earth is a sustainable building method that has been around for millennia. Dating back to as early as the 9th–7th millennium BC, rammed earth has been trusted as a reliable building method and material for homes and structures on every continent except Antarctica. Bringing the method to Slovenia, three architects Merve nur Başer, Aslı Erdem, and Fatma Zeyneb Önsiper conceptualized their tiny home called Rammed Earth House to reinterpret early 20th-century farmhouses, holding onto a traditional pitched roof and introducing modern solar energy production methods.

In conceptualizing the Rammed Earth House, the team of architects set out to balance contemporary energy production practices with traditional building methods. Located in Dobrava, a settlement in Slovenia’s flatland region, the Rammed Earth House is inspired by the famed floating roof designed by Slovenian architect Oton Jugovec. Since rammed earth involves compacting a mixture of subsoil into an externally supported framework, the three architects behind Rammed Earth House conceptualized a concrete foundation and timber framework. It’s generally difficult to make changes to a rammed earth structure, but the home’s overhang roof allows cement to be added in the case that extra stability is needed. Rammed Earth House is sheltered with an overhang green roof that works to protect the building material from the threat of erosion as Dobrava experiences rainy, temperate, and snowy seasons.

Rammed Earth House’s sustainable build allows for passive insulation and heating methods to cool and warm up the home.

Specifically oriented to take in the sun rays during winter months and block them out during hotter seasons, the Rammed Earth House takes cues from its surrounding environment and climate to ensure comfortable, passive heating and insulation throughout the year. Windows are also strategically placed around the house to allow cross-ventilation throughout the home and changing seasons. The green roof also holds an array of photovoltaic panels to power the home with harnessed solar energy and a rainwater collector for water recycling and an integrated septic tank system. Inside, each living area is appropriately situated to benefit from the passive heating and insulation methods. The house’s north facade, for example, features fewer windows than the west facade to decrease potential heat loss during colder months.

The award-winning Tetra Shed has evolved into something entirely new and more substantial. Introducing, the Tetra Hotel! It expands on the live-in triangular pyramid, clustering…

This sustainably designed chair pushes for the circular economy model in design!

Cutting Back the Hills

Designers at 24° Studio were given a task to create a structure for a pretty specific area of wetlands, a structure that not only provided…

This futuristic ferry terminal looks like an alien’s gantry and will begin construction in November 2022!

The Chongqing Cuntan International Cruise Centre is an upcoming futuristic ferry terminal designed by MAD Architects for Chongqing near the Yangtze River. Terminals and transportation…