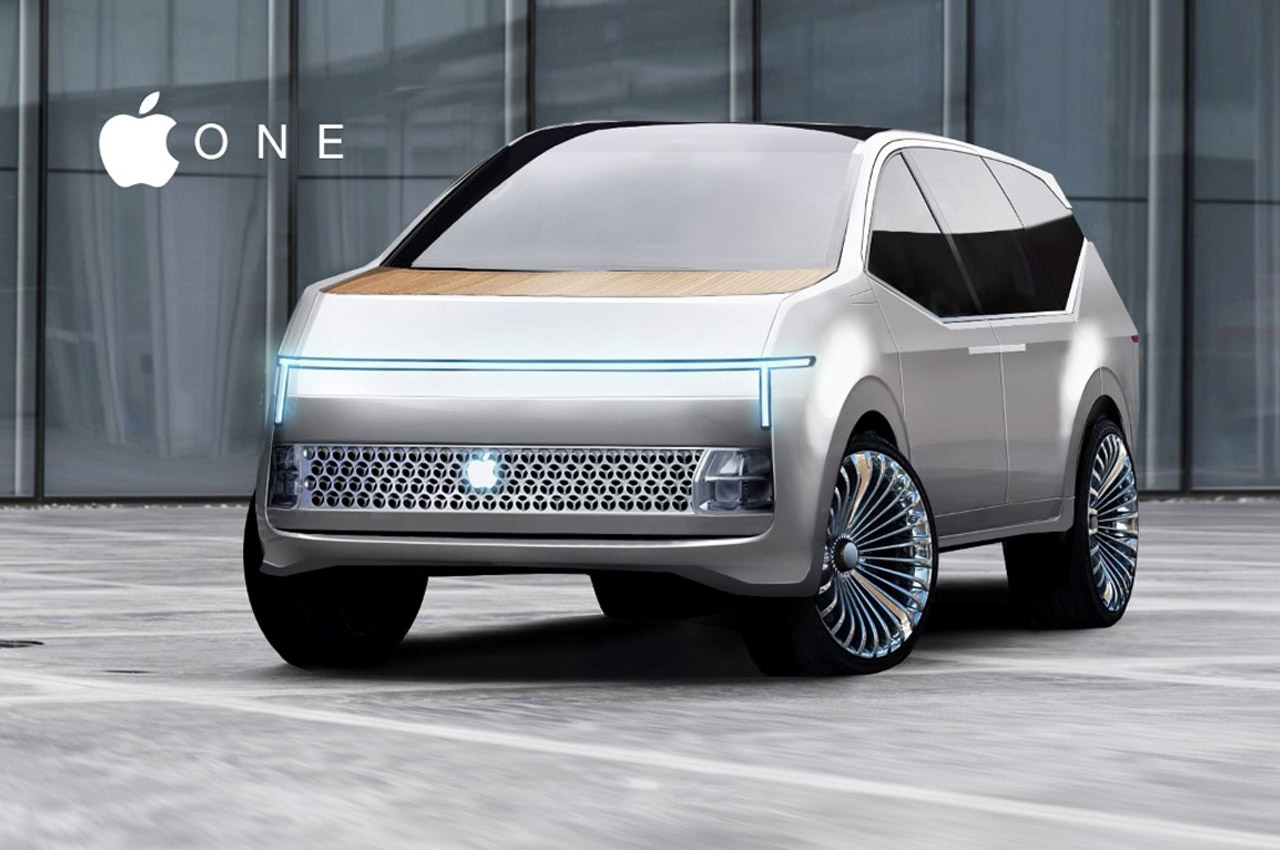 One thing that all Apple fanatics are wondering all the time is – what will the Apple car look like? This electric car is probably the most anticipated automotive design in a long time! Though we may not know much about it, one thing is for sure -it’s going to be unlike anything we’ve ever seen before. As we wait for the release of this innovative automotive, here are some of the best Apple Car concepts we’ve come across! These inspirational concepts will have you itching to see the real deal on the road very soon! 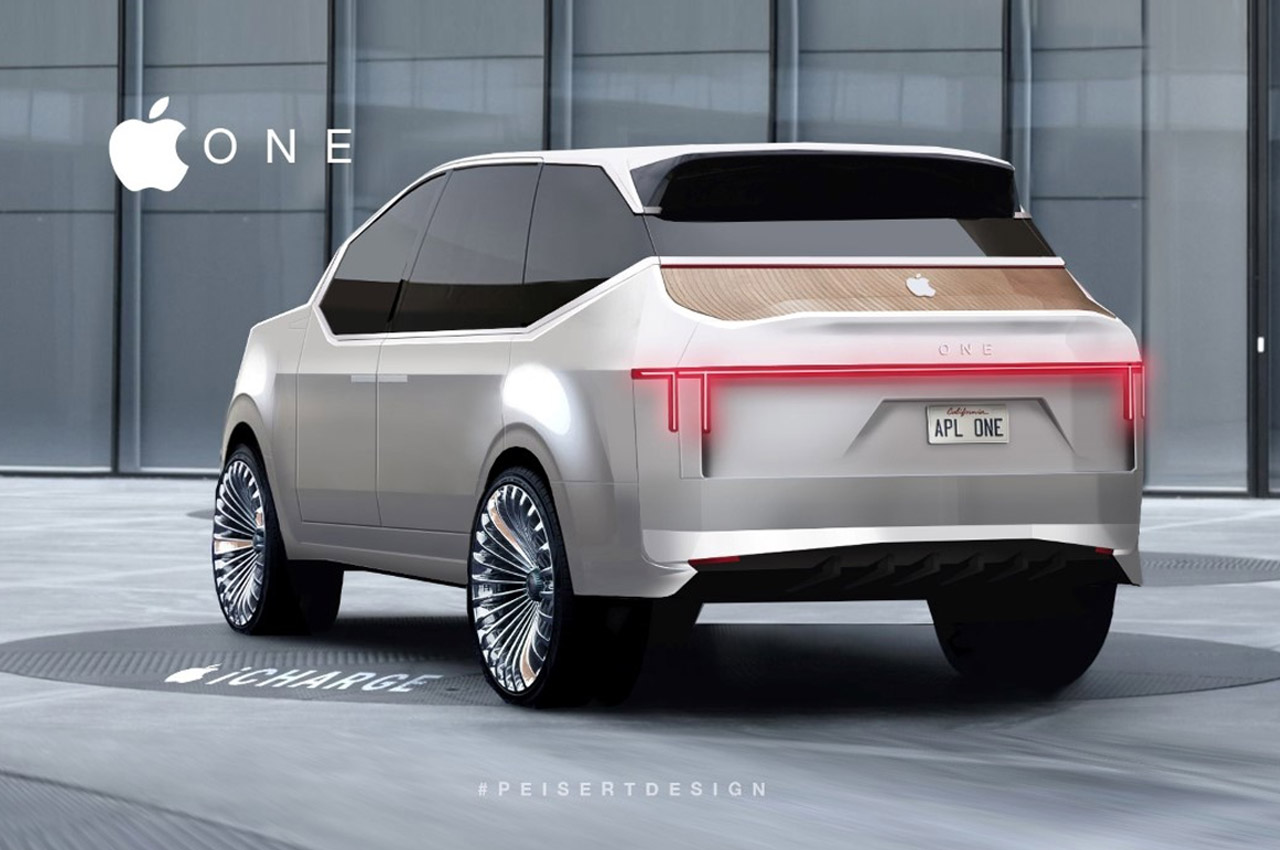 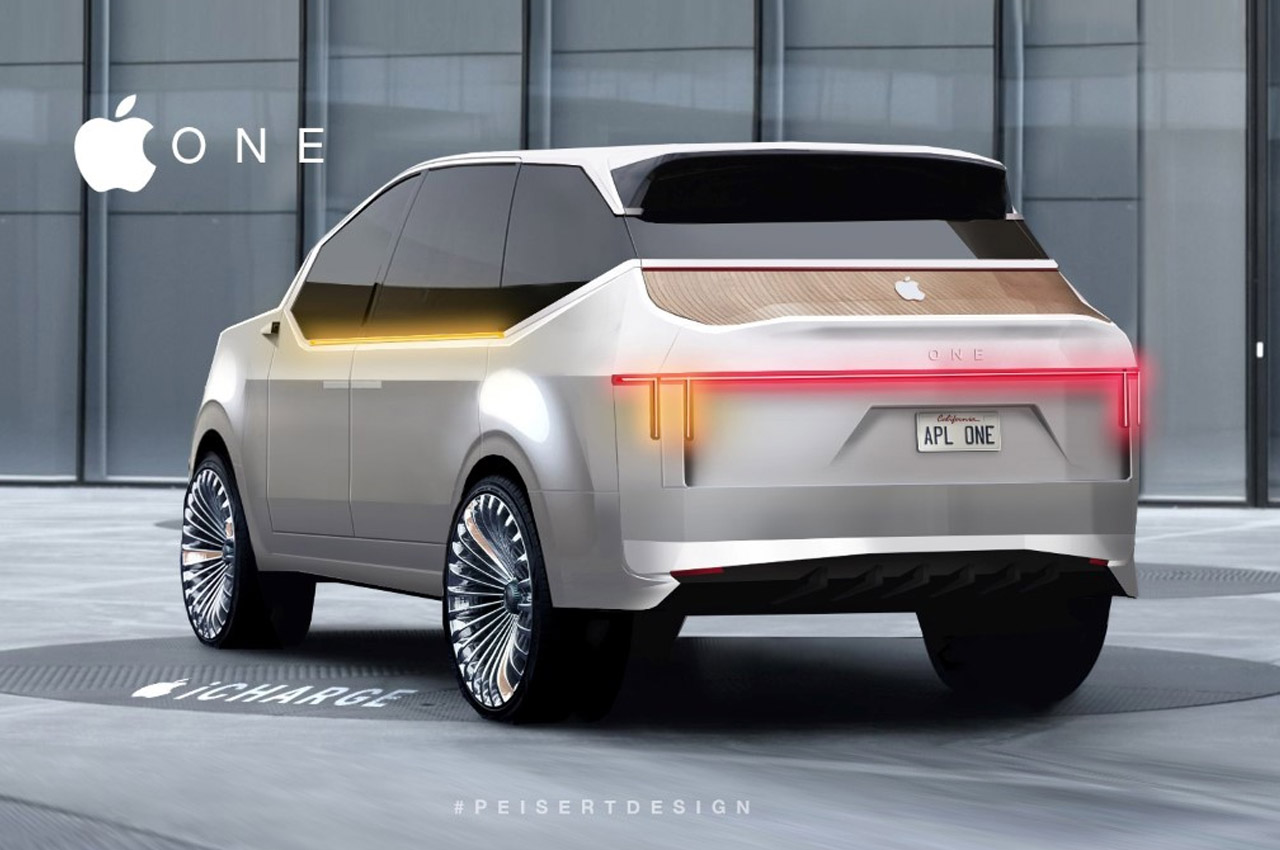 Meet the Apple One, a sophisticated-looking SUV created in the image of the company behind the iPhone. Peisert’s Concept One embodies all the good aspects of Apple (and a few unsavory ones) into a design that’s meant for the entire family. It’s a luxury car, but it isn’t a sedan. Instead, the Apple One is a one-for-all sort of SUV that accommodates 4 or more people pretty spaciously. Its proportions (and especially that headlight) feel slightly like a cross between the Tesla Cybertruck and the Rivian SUV. The design is mildly angular but doesn’t come with any edgy surfaces or straight lines. Instead, everything curves rather organically… a feature also seen in the continuous curves found on Apple products. 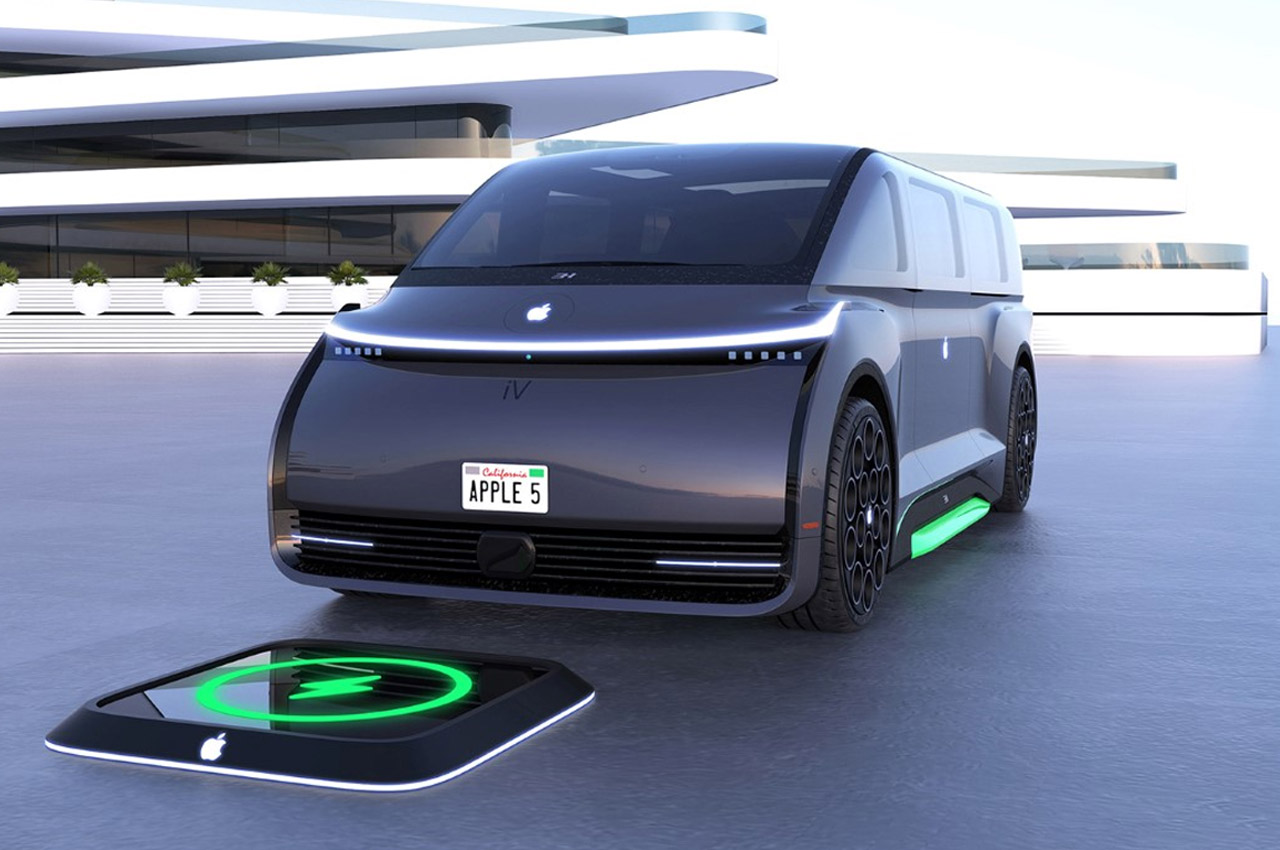 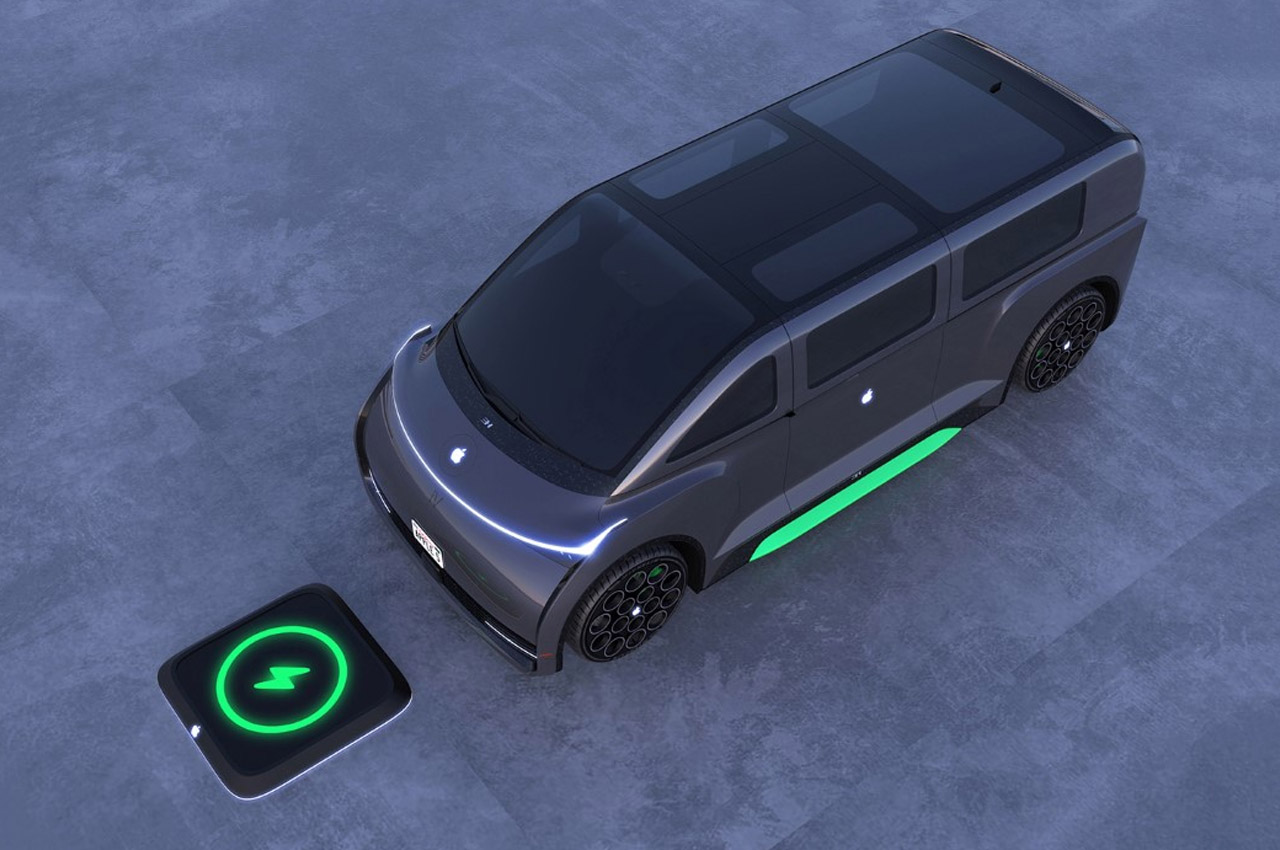 The Apple iV (iVehicle, or iVan) minivan would come with a clean, no-nonsense design language best associated with the brand, along with the glowing Apple logo once seen on the company’s MacBooks. Available in the three colors often associated with the brand’s image (white, space gray, jet black), the iV looks large enough to seat well over 4 people, but the presence of only two doors would indicate a seating pattern that’s different from that commonly found in minivans. Look carefully and there’s a green dot beneath the Apple logo on the front as well as the back, possibly indicating the presence of self-driving sensors. 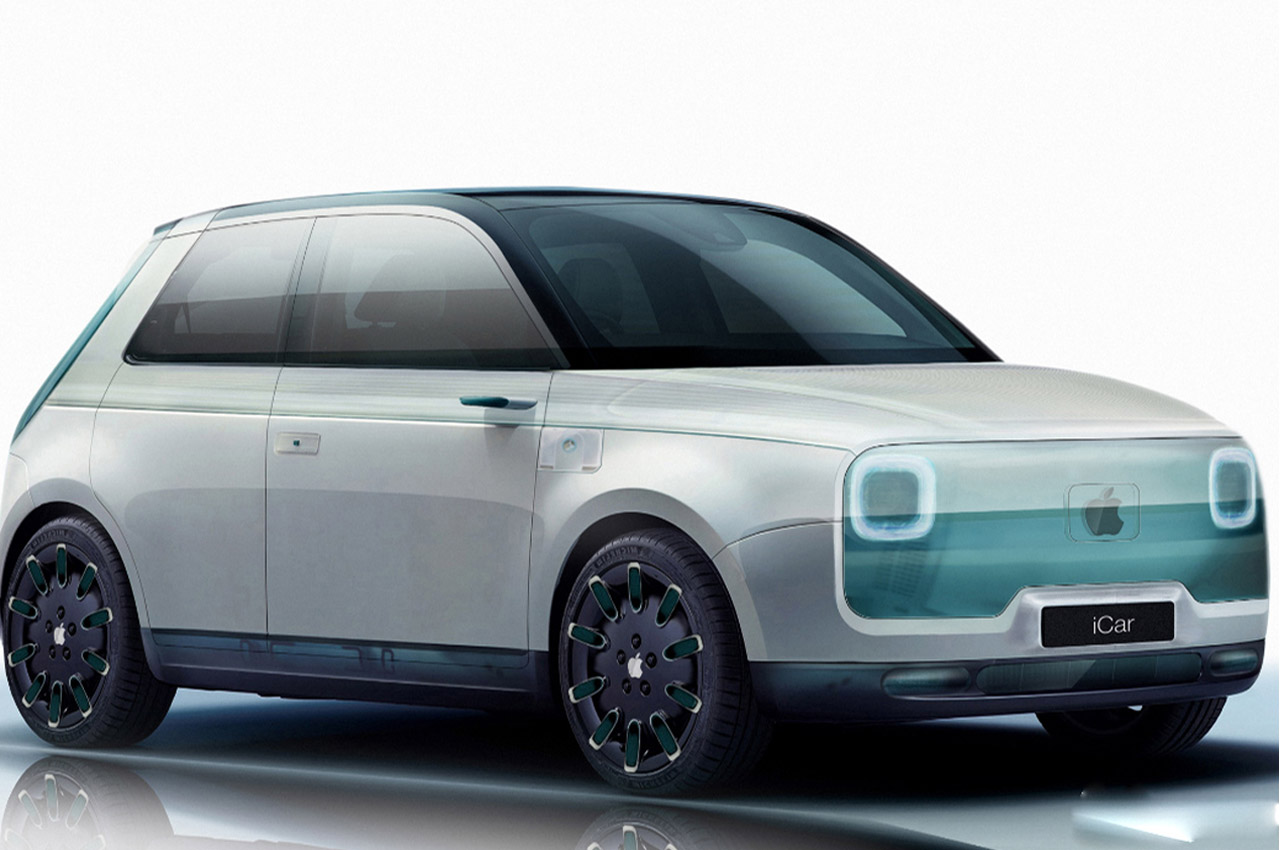 While you might want to dismiss this as the future of the Apple Car, still the design looks interesting if ever there was a low rung variant of the Apple car like the iPhone 12 Mini. While it might not turn any eyeballs, still it is an interesting take, mashing up the Honda E with the retro iMac G3. It has the G3 split-color design draped in Platinum Pearl White front and a transparent Bondi blue black-end. Sure nostalgia is the dominating emotion here, but pitting it against a Tesla Model 3 won’t be a good idea. 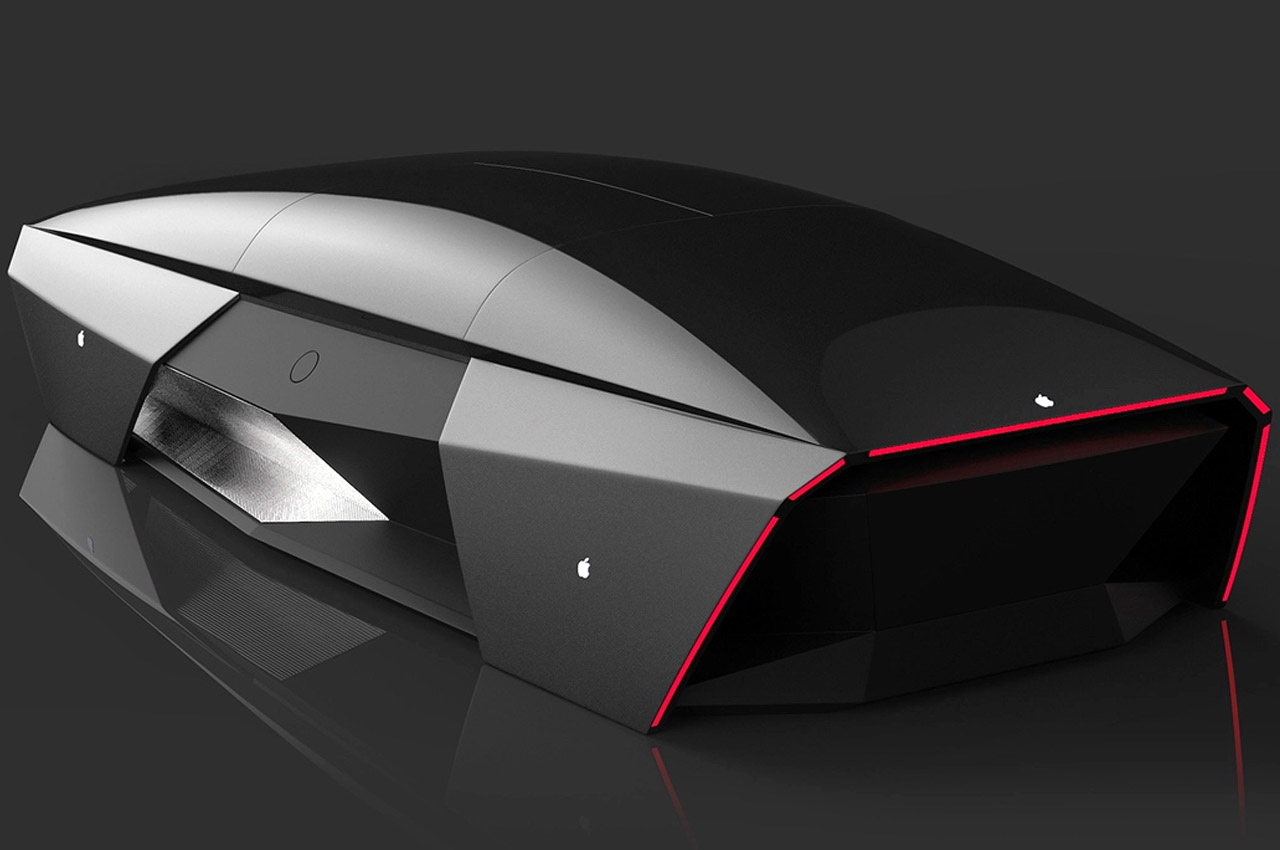 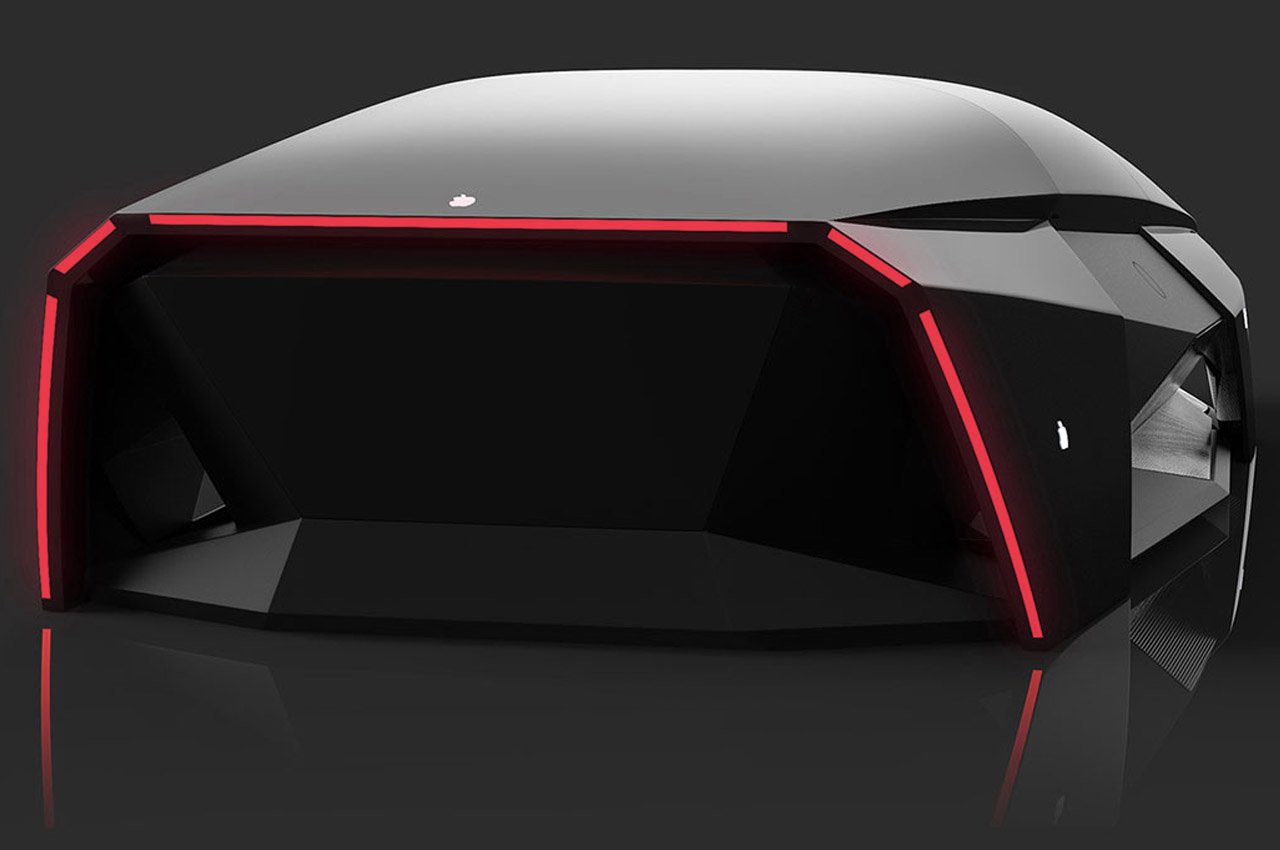 According to some sources, the Apple Car will not have any driver’s seat or even driving controls which could be a bummer for motorheads who love the feel of controlling their machine. What the Apple Car will look like is anybody’s guess but to give a close idea of what it may be like, Ali Cam’s Apple Car 2076 is a good reference point to take home some inspiration. Adopting Apple’s sharp design aesthetics, the car looks like a mouse shaped like a car at first glance, but then you realize it’s actually a minimal car concept. Loaded with advanced driving systems Ali envisions the blueprint far in the distant future – the year 2076 to be precise. The choice of year apparently is the 100the anniversary of Apple ever since it was founded by Steve Jobs, Steve Wozniak, and Ronald Wayne. 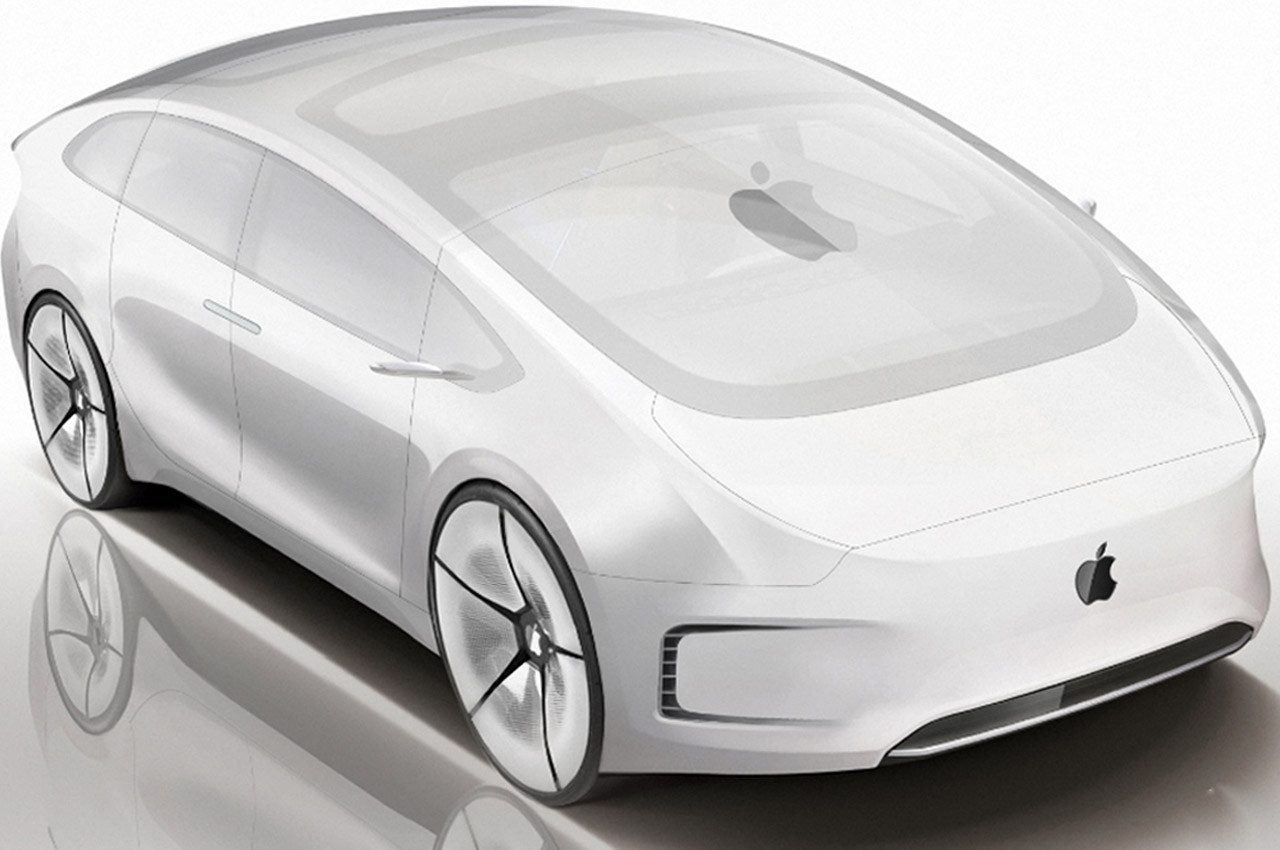 Being the first car that was offered as a hybrid, plug-in hybrid, and a full EV – the Hyundai Ioniq is the inspiration for this render mashed up with the Magic Mouse in a render that looks so future-forward and balanced for a compact EV design. The Apple logo is prominent even on the panoramic windshield, and the front grill. But would anything like this take shape of the Apple Car? 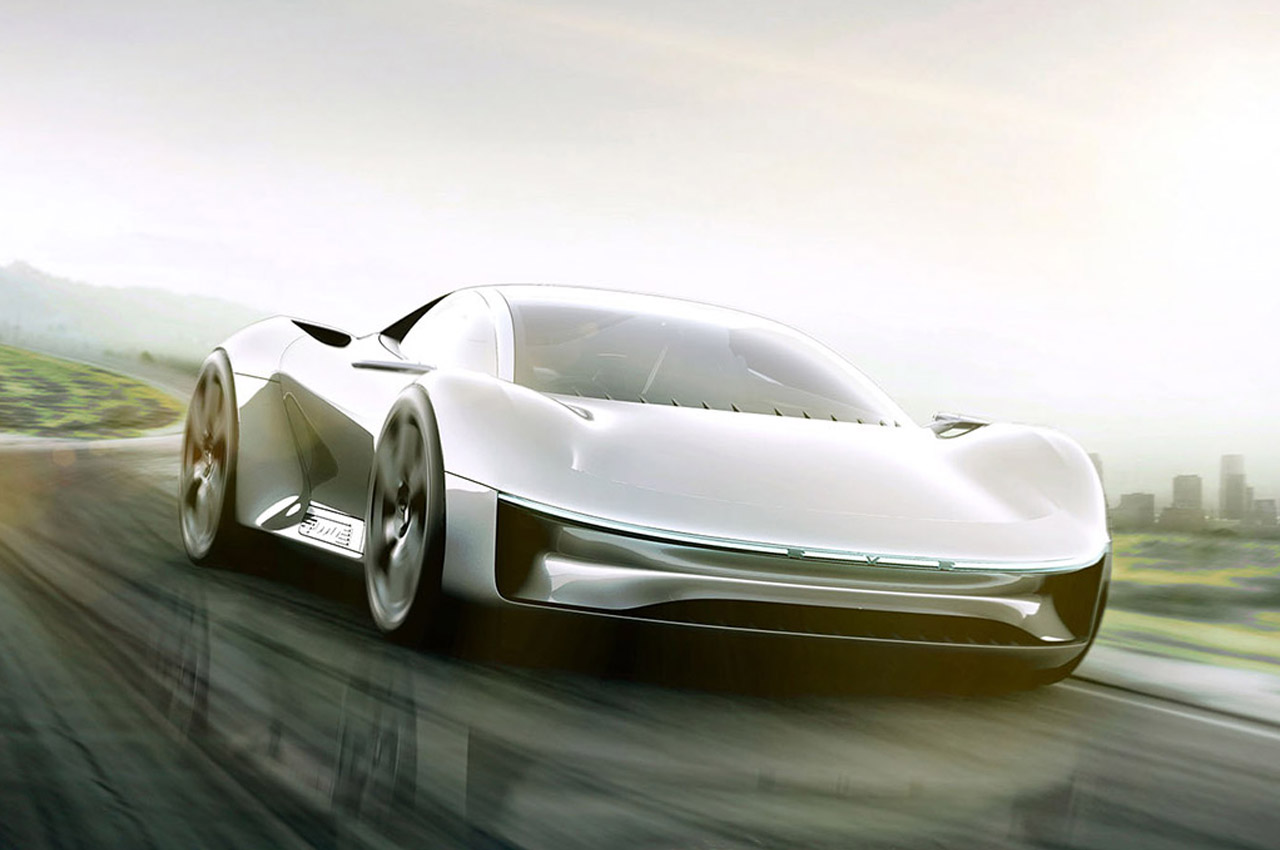 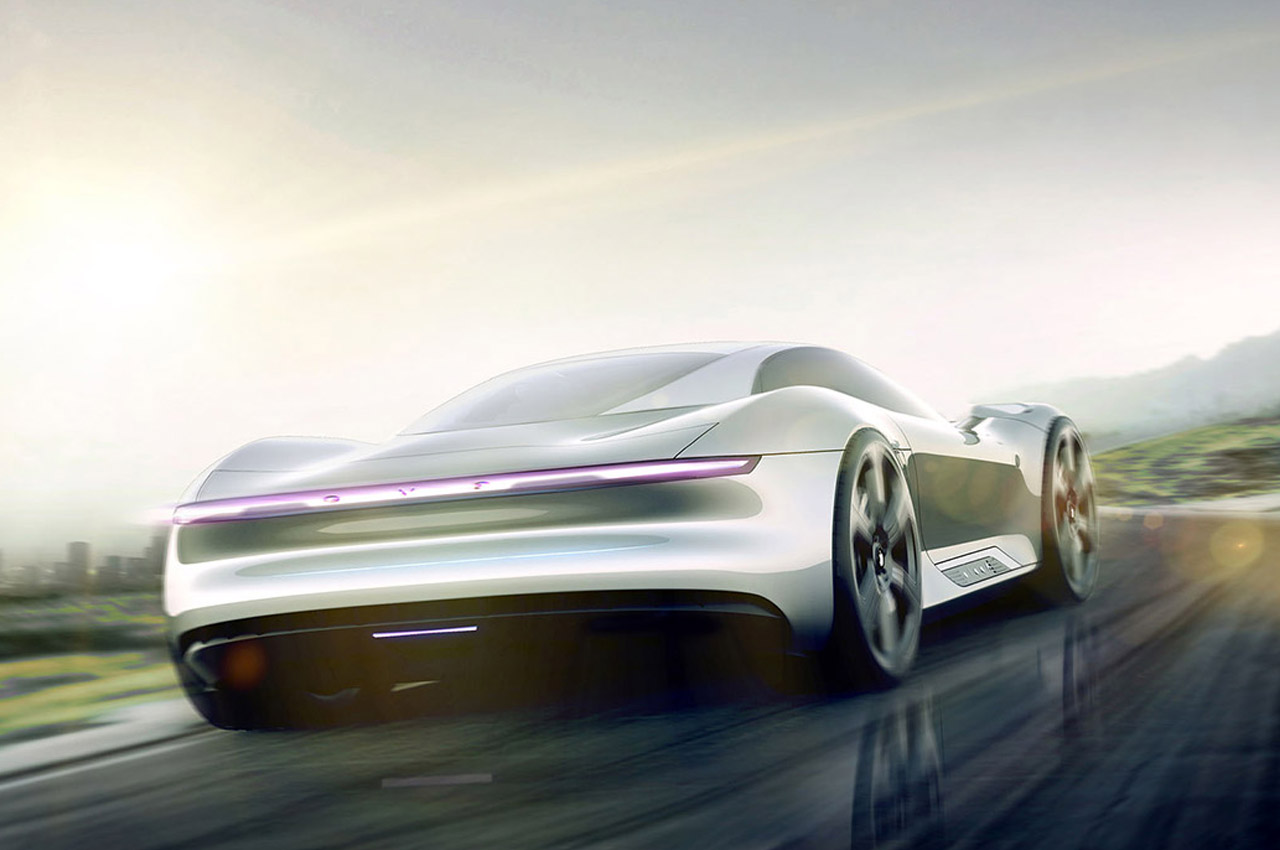 Dare I say, I like this Apple more than any post-Jobs release?! Despite being an exploration in automotive design and not tech gadgetry, its minimalism and purity look quintessentially Apple and it feels like something straight out of the brand’s heyday. Little is known about the conceptual specs except that it’s electric (of course) but put our pre-order in! We think Jobs might just approve of this one. 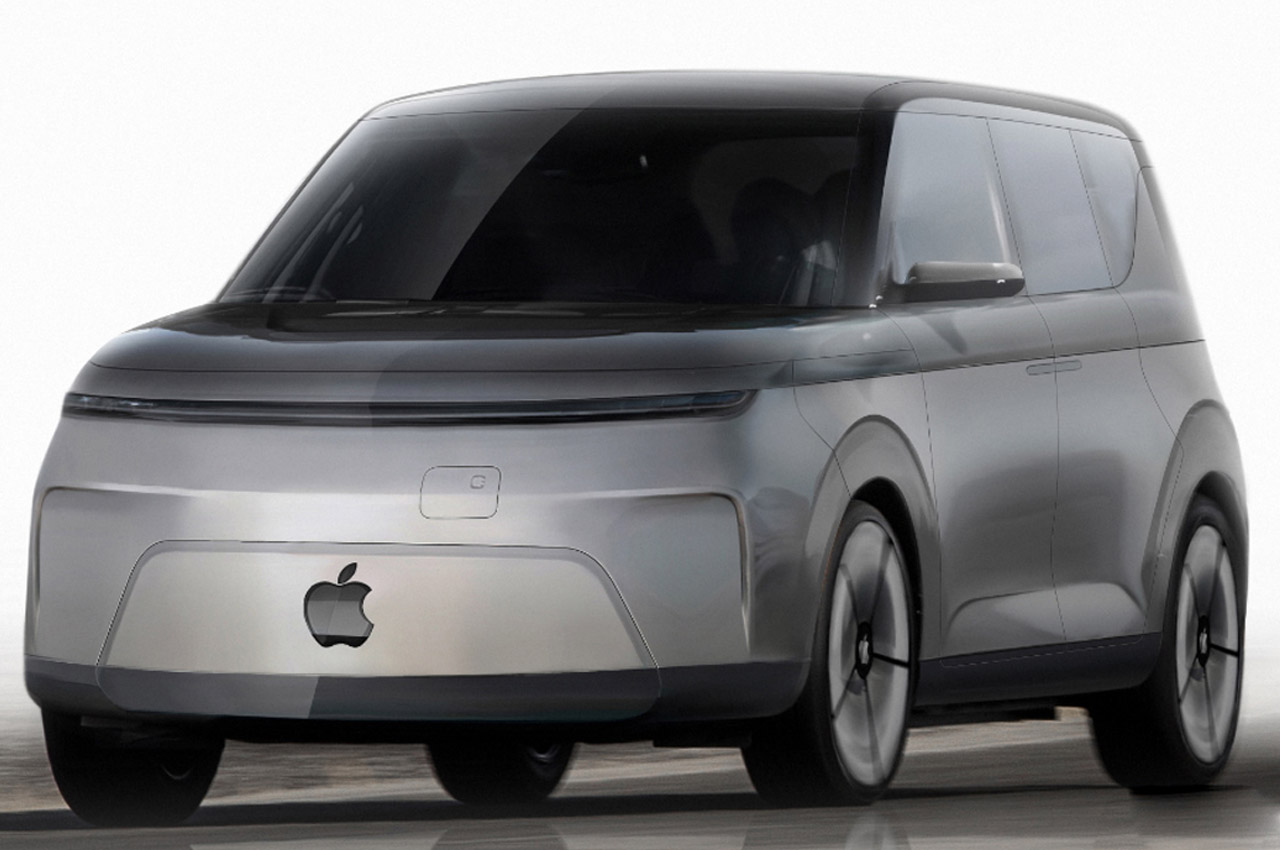 Since Apple and Kia were in the limelight a few months ago for their speculated collaboration, it didn’t see the light of day. This amalgam was destined to be here with the quirky-looking Kia Soul EV crossover SUV morphing partly into an iMac Pro which is a powerful machine to own. That said, the machine is going to be discontinued from the Apple family. Leasefetcher imagines the Apple Car could have the iMac’s Space Grey skin, highlighted by the tall profile of the windscreens on the back and the rear. 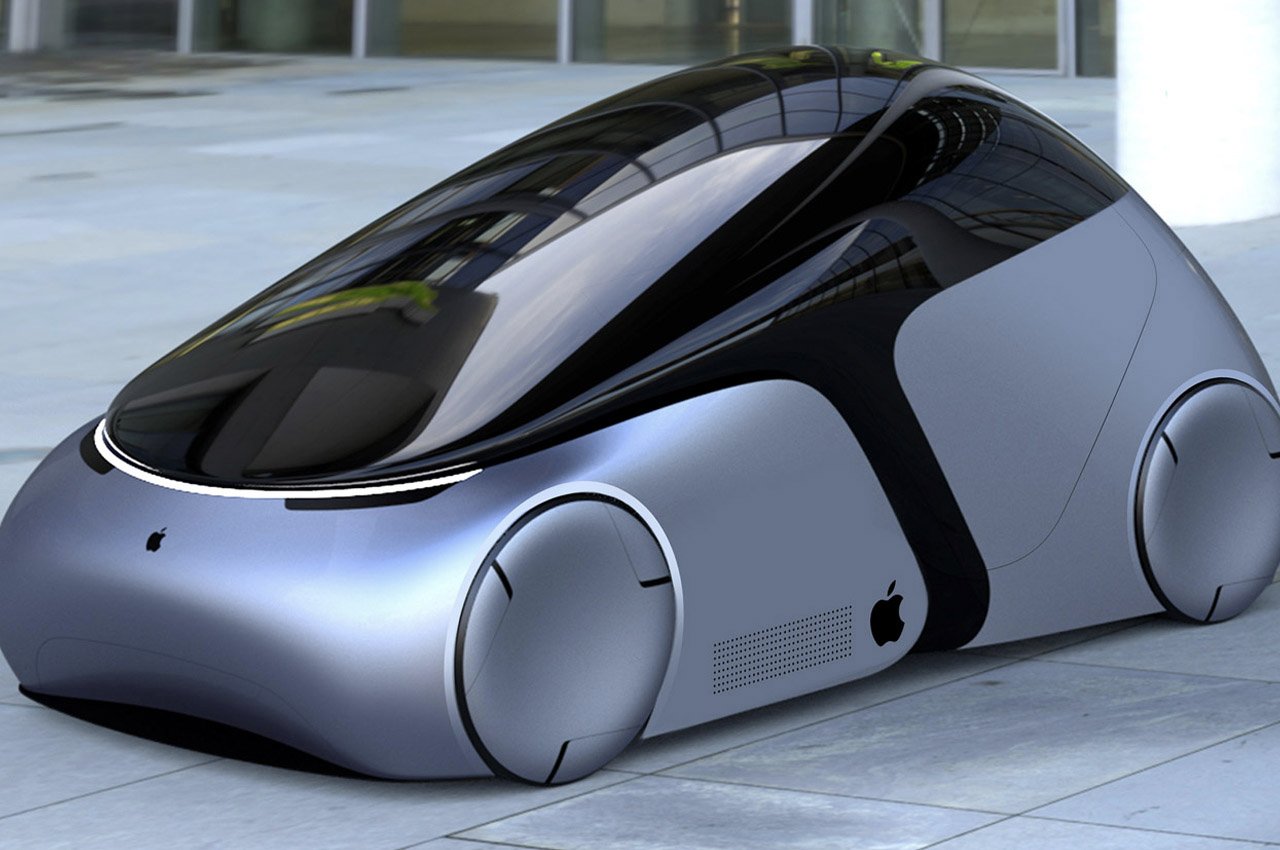 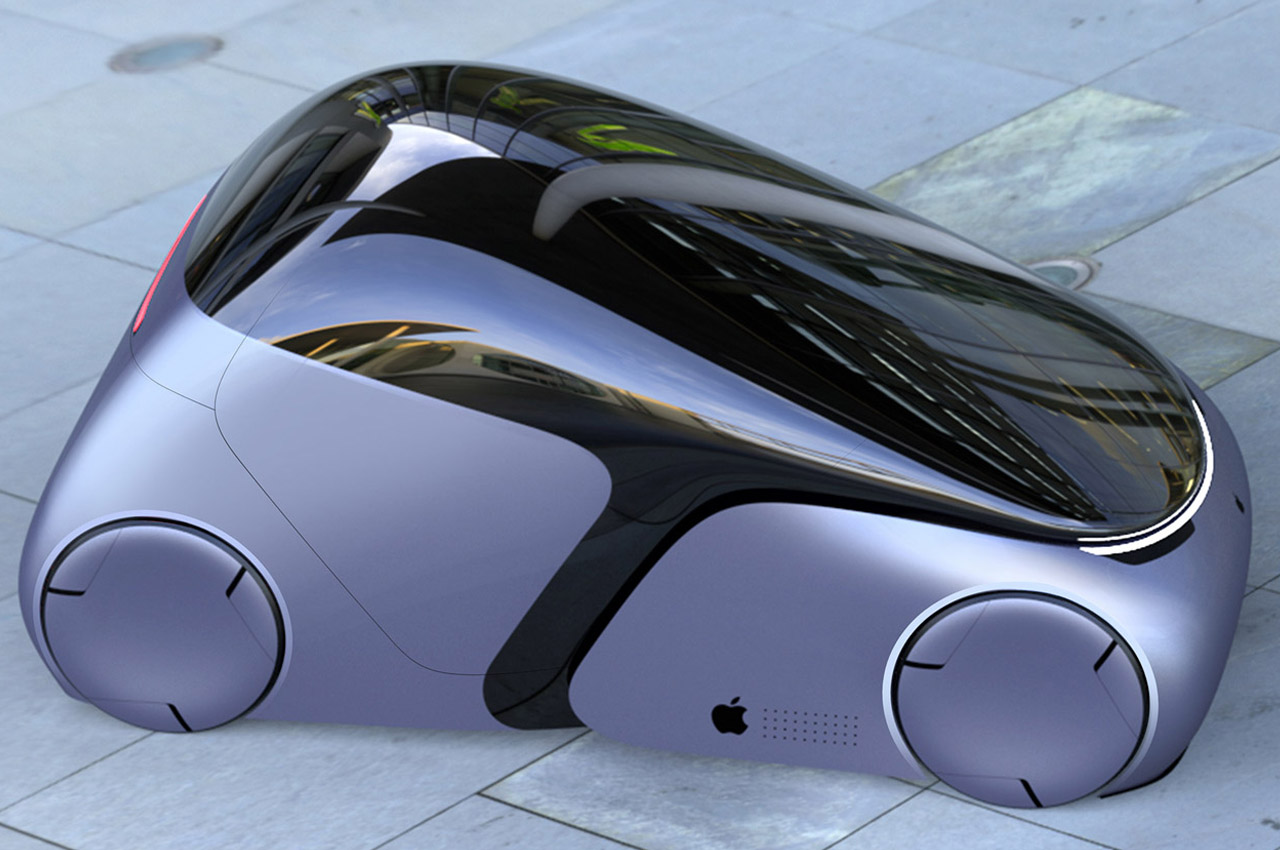 Designer Ashish Gogte’s take on the Apple Car seamlessly integrates into the existing Apple ecosystem – a feature that current Apple users value the most. Ashish likes to call it the iCar, and the vehicle has an upright stance like the Apple Mouse 2. Modularity is at the core of this concept Apple car – wherein the front and the rear wheel assembly is swappable with a different one. Furthermore, the driving assembly has the battery integrated into the design to keep the modularity aspect at the forefront. We can even swap the drivetrain with a more powerful version or any future updated chassis that Apple designs. This brings a practical scalability aspect to the concept car, which is, in a way, intriguing. 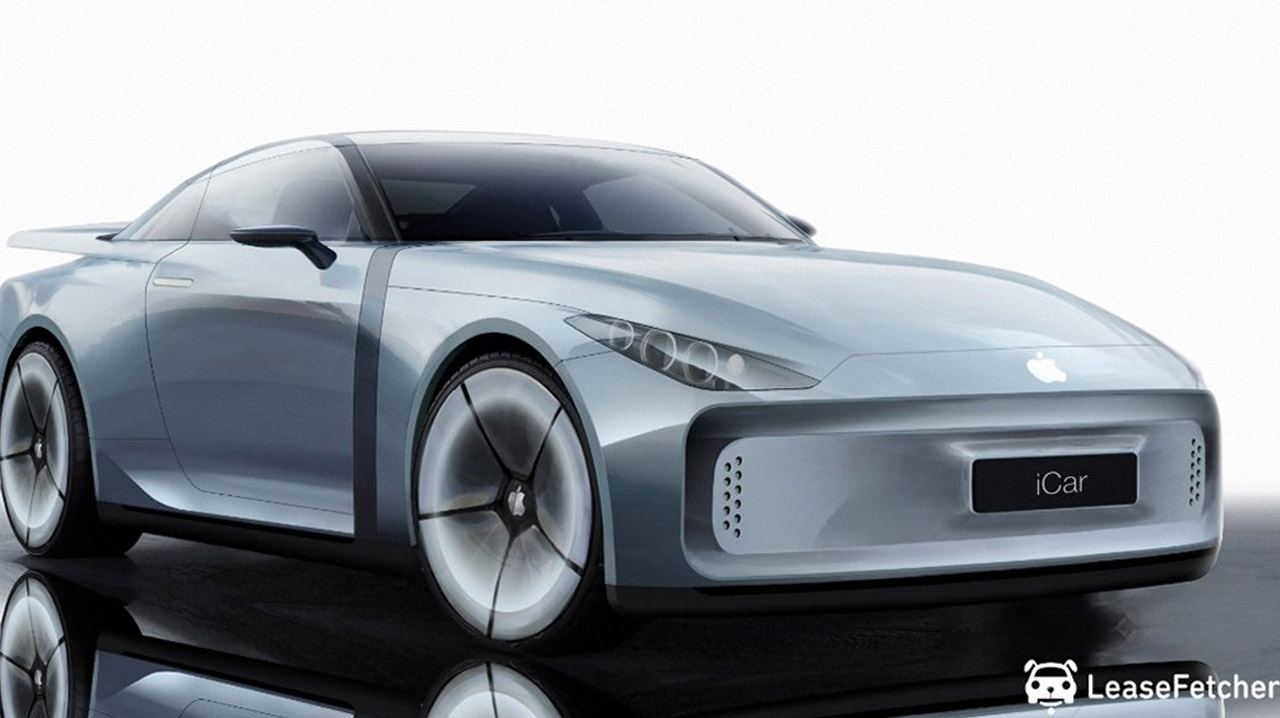 This performance-laden render truly demonstrates the future aesthetics of the Apple Car since it is an amalgam of one of the most iconic supercars of all time – the Nissan GT-R and the best ever iPhone that one can own – the iPhone 12 Pro. The Nissan GT-R is undoubtedly one of the best aesthetically inviting designs that Apple could take some cues. Leasefetcher emphasis the adoption of the Nissan Ultimate Silver color along with the flowing shape extenuated by the iPhone 12 Pro button-styled door handles. The LED headlights are inspired by the camera module and the grille takes shape of the edges of the smartphone.

There have been so many concept iCars around, I’m guessing Apple is just as tired as I am. Not many designers focus on the driving experience though. Just the outer body. Designer Matias Papalini imagined the dashboard complete with an interactive wide touchscreen. The steering wheel is completely detachable and can dock into the dashboard to enter ‘driving mode’. Unplug the wheel and you’re in auto-pilot mode. Not just that, you can watch movies in an almost-cinemascope style experience! The dashboard, however, is just half the magic. Your steering wheel has functionality that allows you to manipulate content on your dashboard. Not just that, you can dock your iPhone in your steering wheel for more convenient access.

Inspired by the warm winds that originate in the Mediterranean between Africa and Spain, the Levante 360° fan heater provides efficient multidirectional heat that is…

This is One Juicy Design

The oldest known lemon squeezer patents came around in July 1860, so it comes as no surprise that it has become a tough product to…