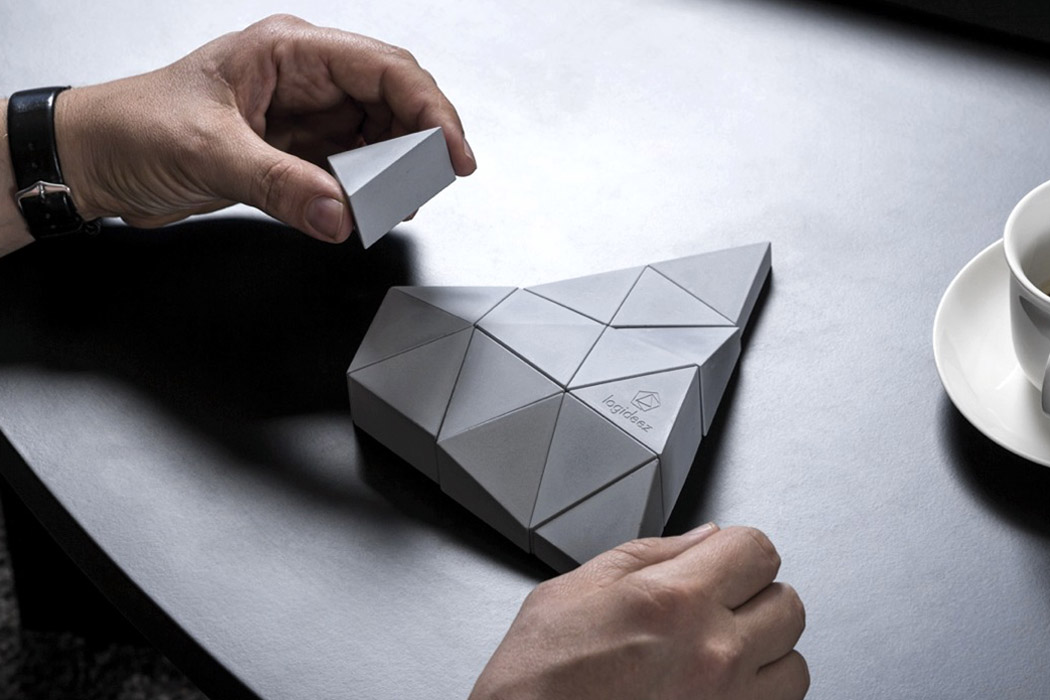 I love super cute and functional stationery designs! They have the ability to brighten up my day. Just having them placed on my work desk, instantly motivates me and I’m simply looking for reasons to make use of them. If you love stationery designs as much as I do, and believe they can amp up your daily productivity, you’re going to love these innovative designs! 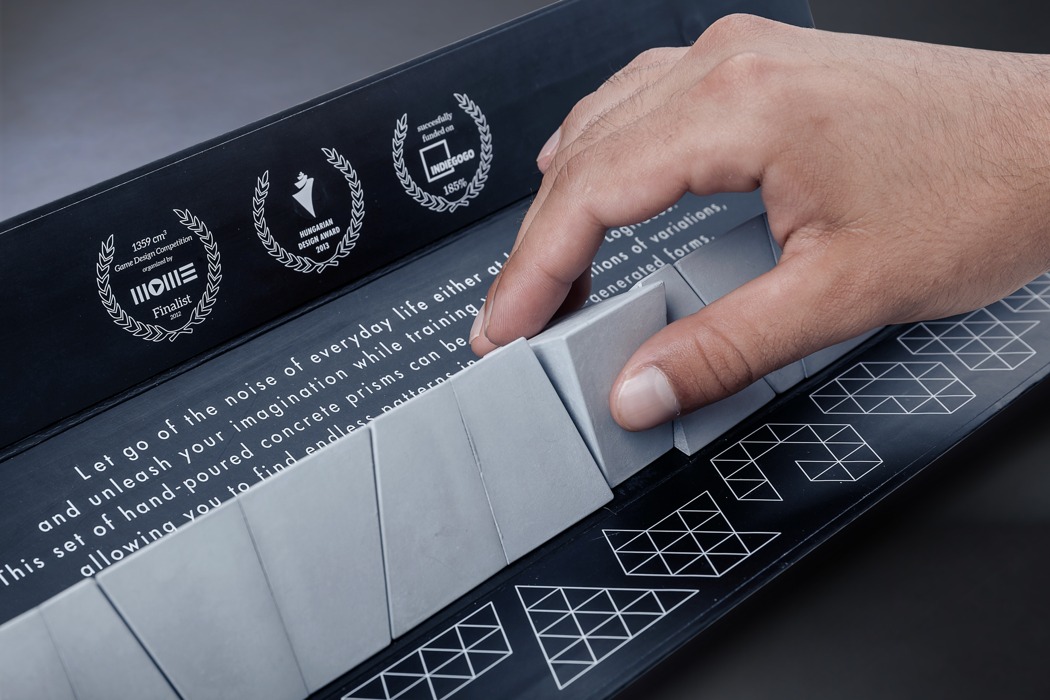 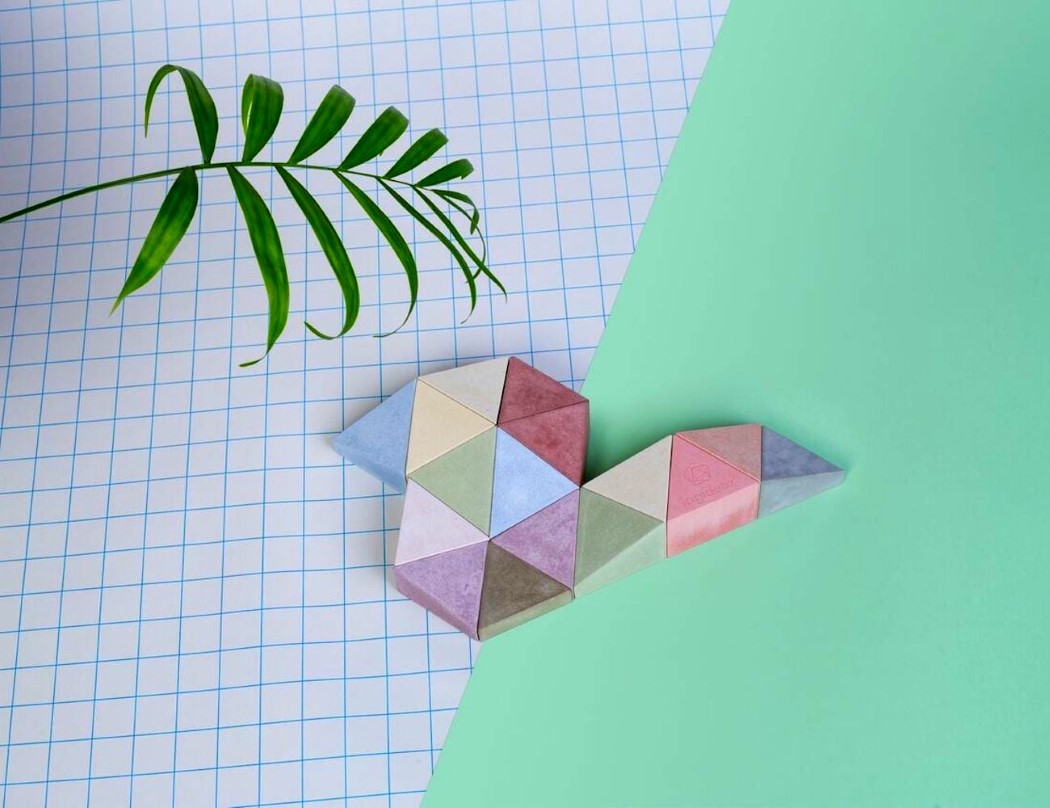 A little like the tangram meets the jigsaw meets the third dimension, the Logifaces puzzle by Logideez is a nice visual and mind exercise. The puzzle comprises a series of triangles of the same size, but different heights (at each vertex), and the only rule is, “Create a form by placing the prisms next to each other to build a continuous surface”. When completed, the Logifaces forms a large triangle with an undulating surface and a nice, concrete, brutalist appeal. The puzzle can be used as a toy, or even as decor, adorning places like work desks or coffee tables. 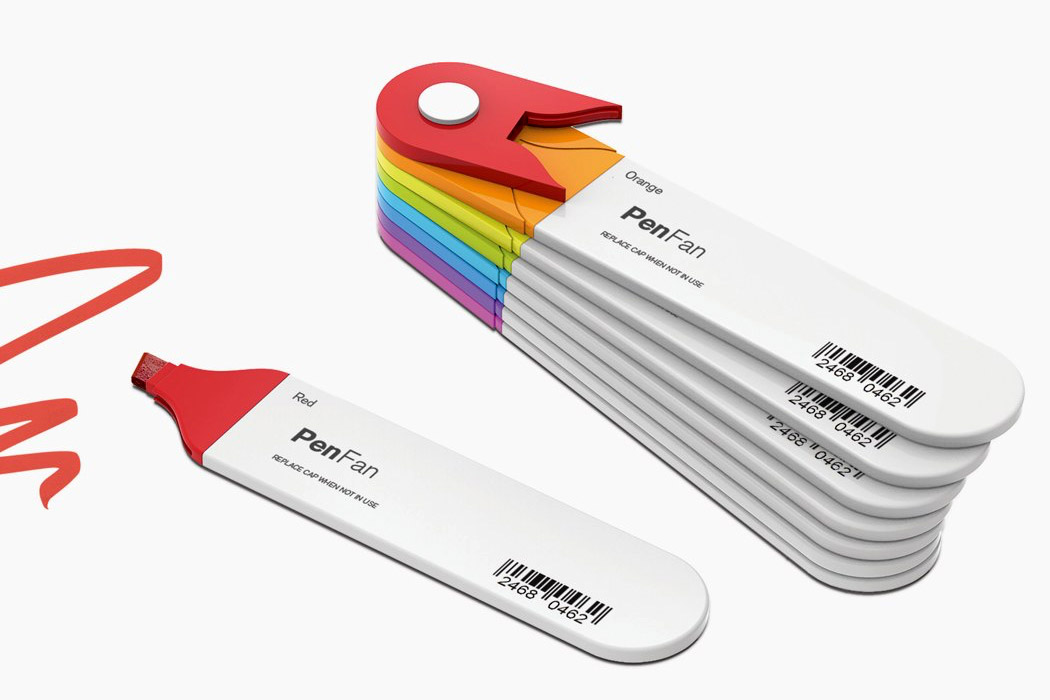 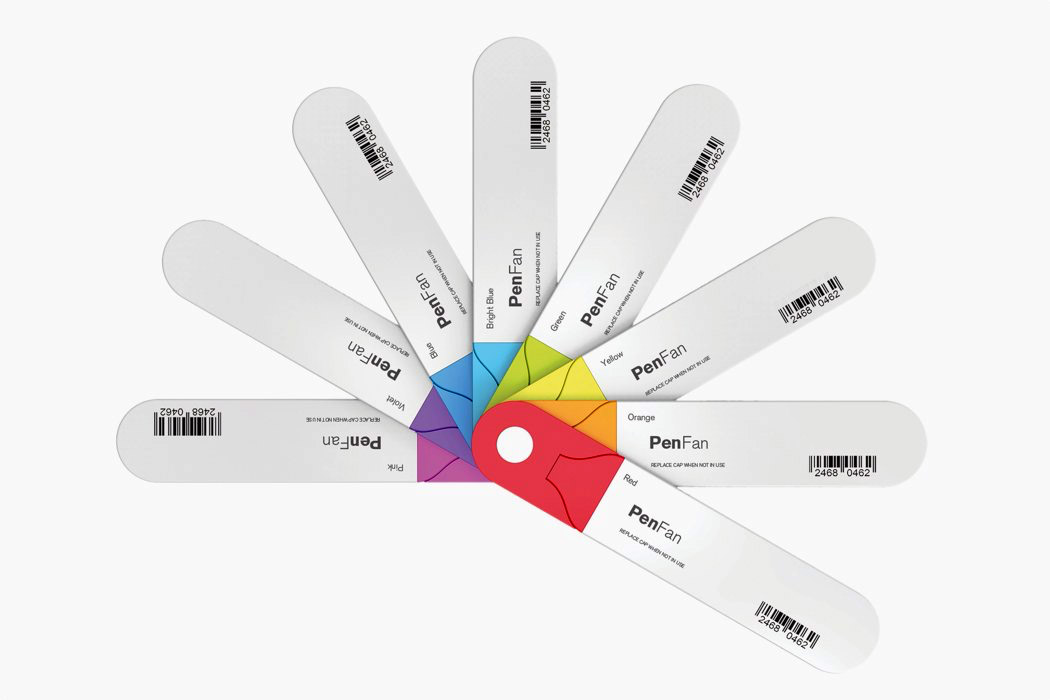 Created as a cross between a Pantone shade card and a stationery set, the Pen Fan fits 8 different flat-head sketch pens in a small, easy-to-carry set. The flat pens are connected to each other, forming a neat Japanese-fan style layout that displays all 8 colors for you to pick and choose from. 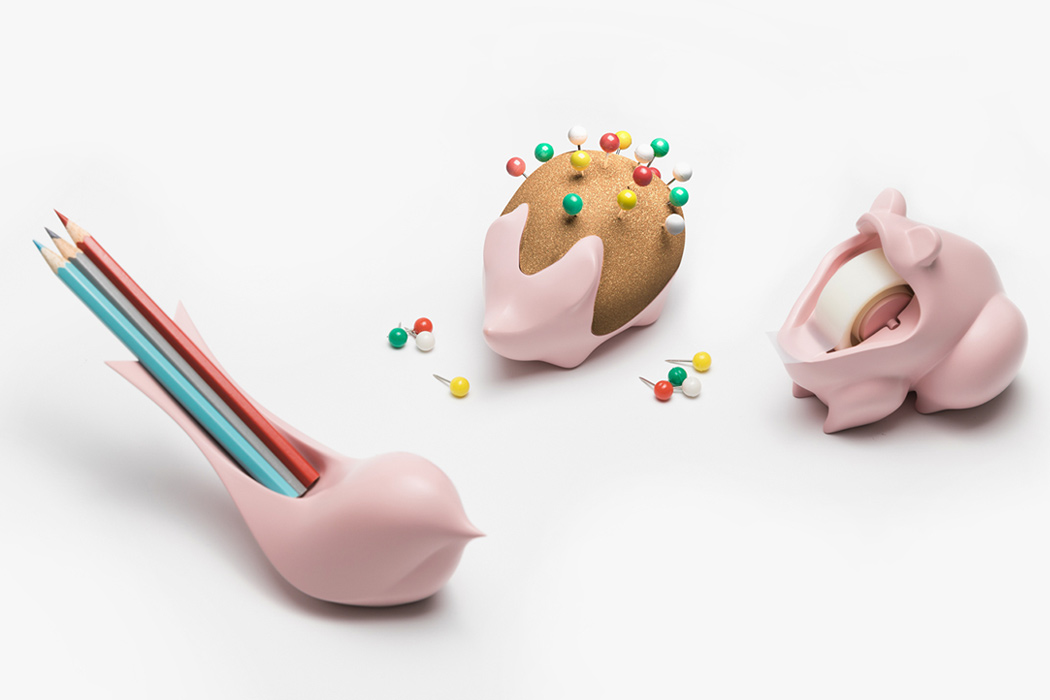 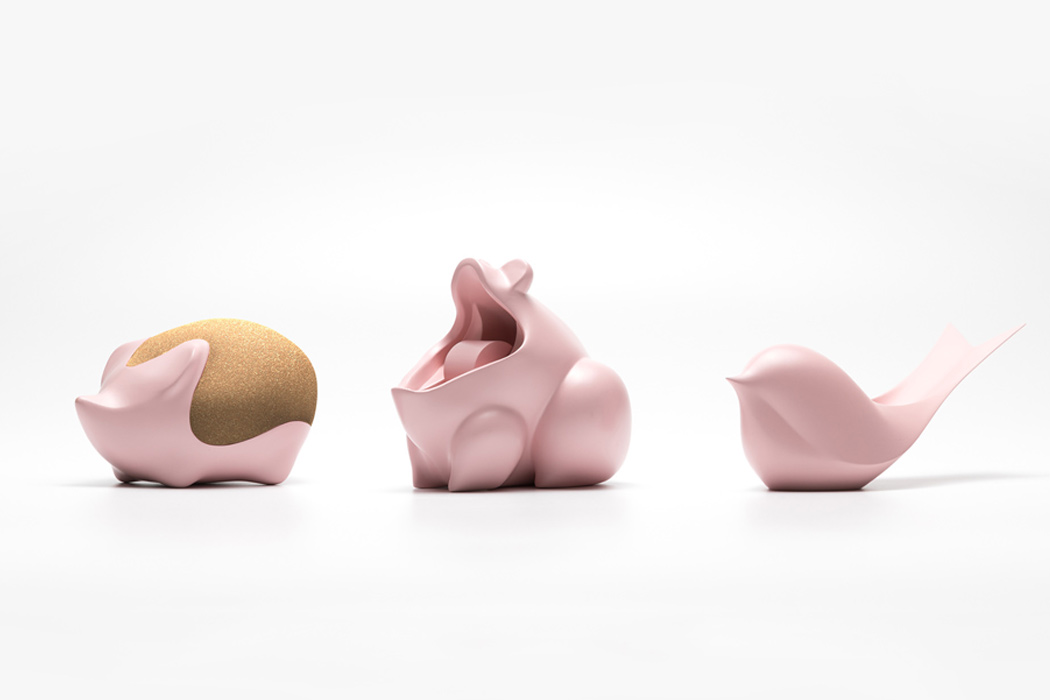 Table Zoo by RONG Design is an example of an innovative series of stationery products combined with the features of adorable animals. The first product in their collection is a tiny frog (or maybe a toad?) which functions like a tape dispenser! Its wide-opened mouth serves as a holder for sticky tape, allowing you to easily tug some out whenever needed. The second item in the Table Zoo collection is a prickly porcupine. Taking inspiration from the quills or sharp spines on a porcupine’s back,  the product functions as a pin holder. A chirpy little bird completes the collection. The elongated tail of the elegant bird functions as a pen/pencil holder. 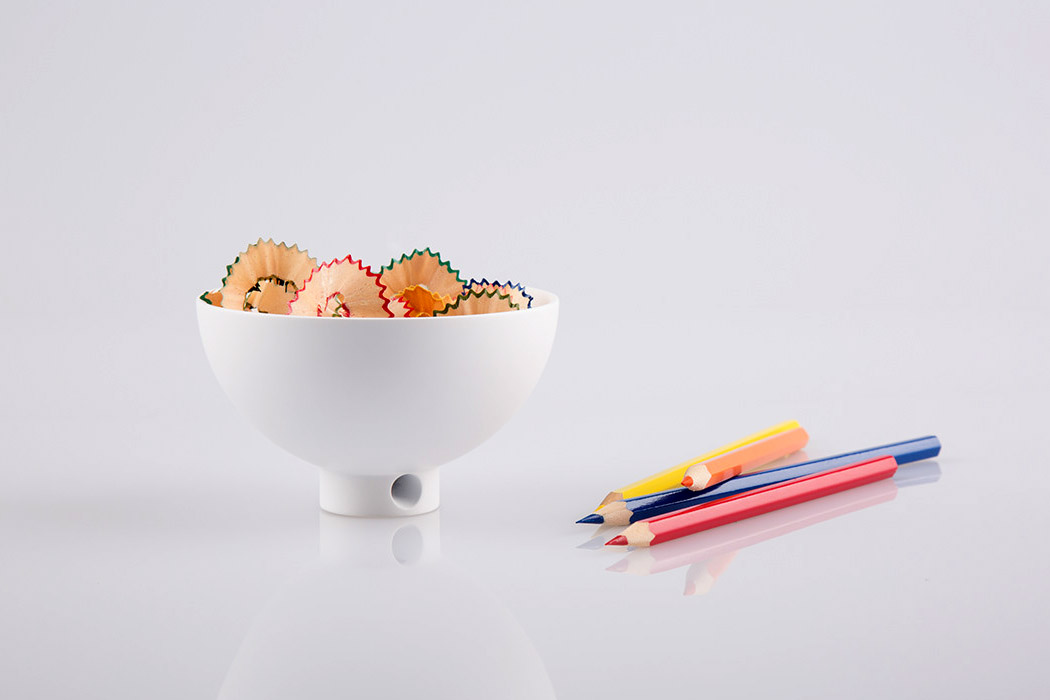 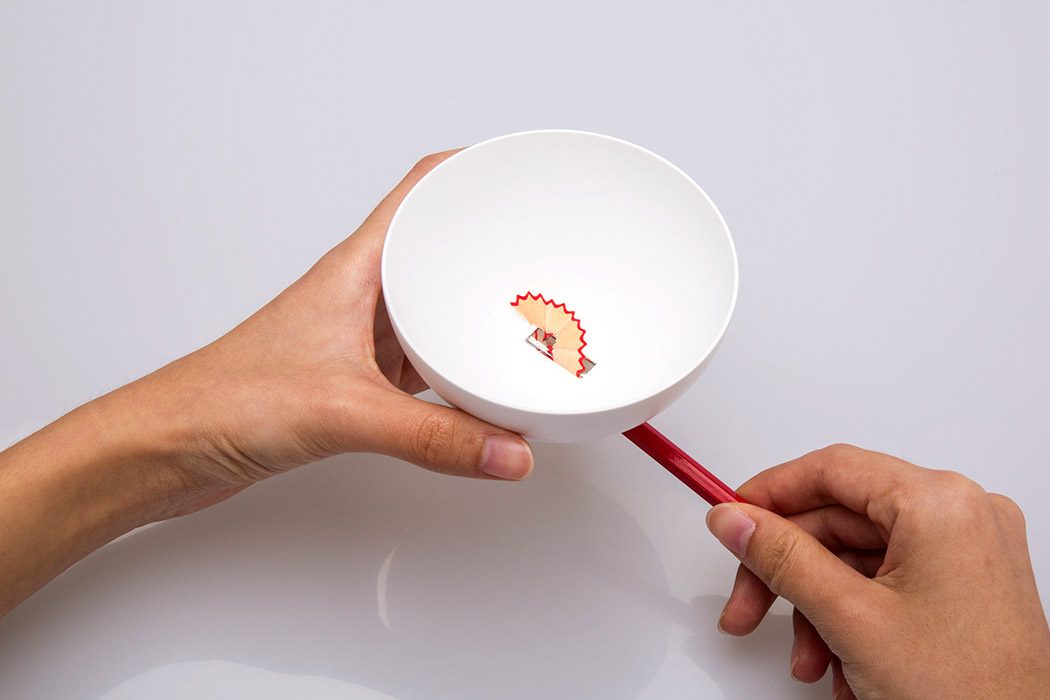 Jiachun LV’s Bowl Sharpener is shaped like a cute little soup bowl! The base of the bowl consists of the actual sharpener opening, through which you slip in your pencil, and begin to sharpen it. As you sharpen your pencil, the pencil shavings and the lead residue are stored in the bowl. Be it those yellow pencils or a rainbow of color pencils, the different shavings create a beautiful visual! 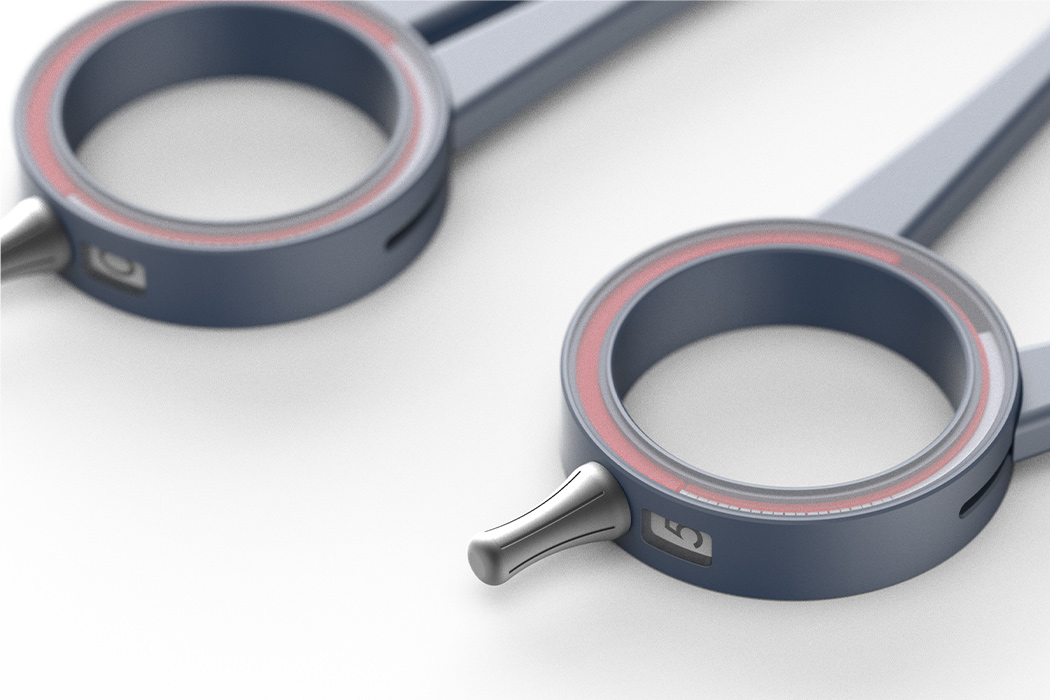 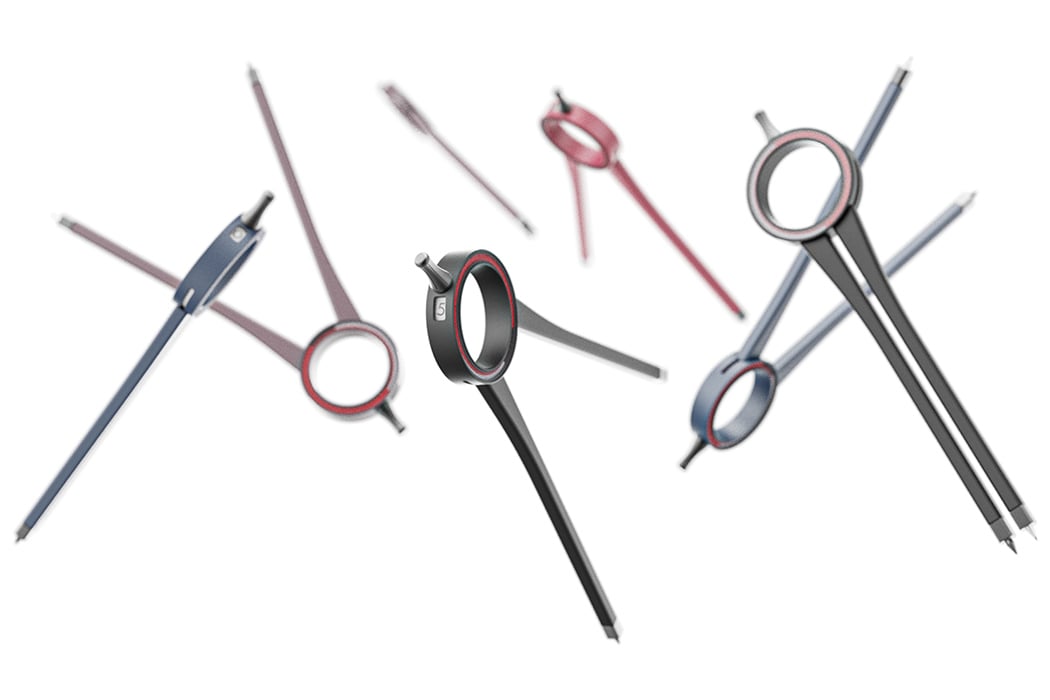 CARBU is a compass and a protractor – so if you are a student or a designer, you know exactly how convenient it is to have tools that serve more than one purpose. The user can make multiple circles without measuring the distance of the opening of the legs with a ruler. The slim legs of the compass on the inside are clogged with discs that are integrated with low-power magnets for smooth movements. The compass has a 2 disc system for accuracy – the inner one disc shows the measurement in a 0.2cm interval and this is amplified with a second disc that magnifies it for ease of viewing. 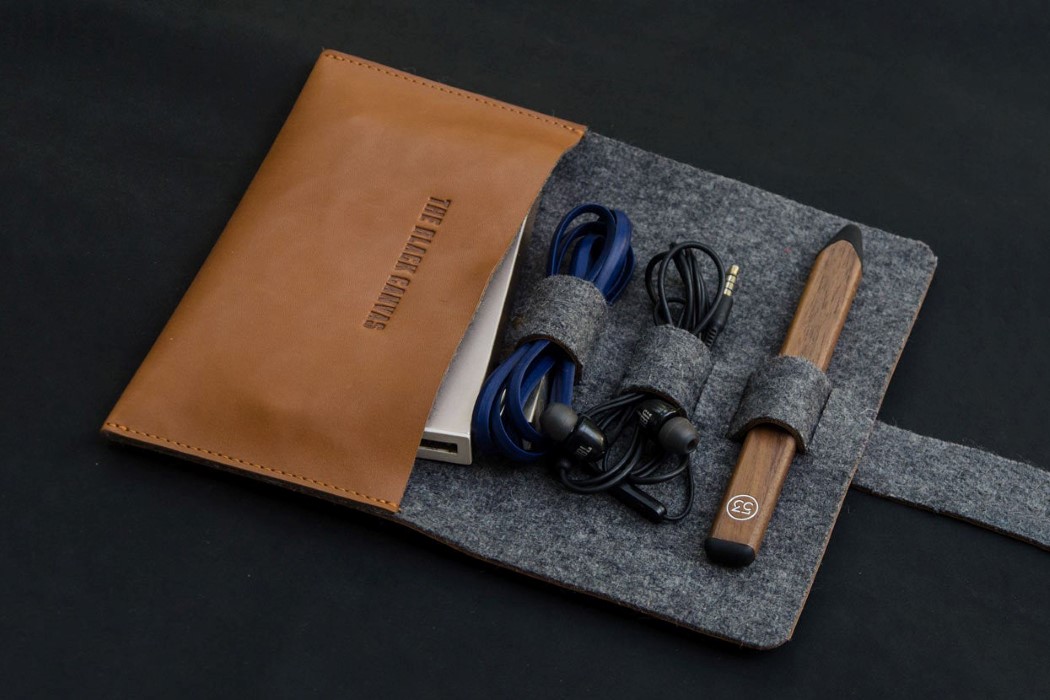 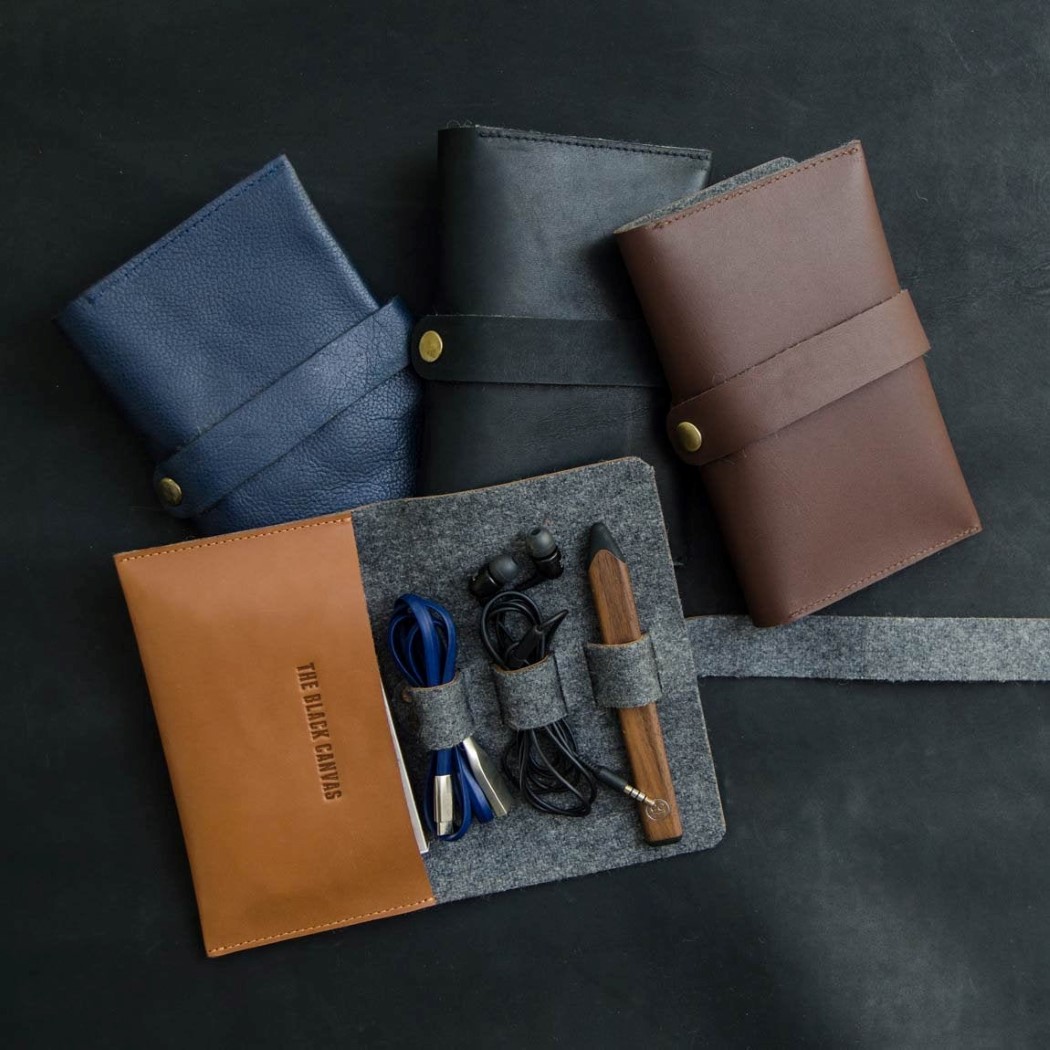 TheBlackCanvas’s leather and felt organizer is most accurately described as a ‘stationery box for an adult’s modern stationery’. It comes with a fabulous looking veggie-tanned leather outer and a felt-lined inner that lets you stash a power bank or hard drive, as well as store cables, earphones, pen-drives, or even a stylus in its loops. Fold it over, secure the push-clip in place, and you’ve got a neat organizer with all your work-essentials and productivity EDC all contained in a rather premium, more contemporarily-relevant ‘stationery box’ that you can either carry in your hand or slip right into your backpack for later use! 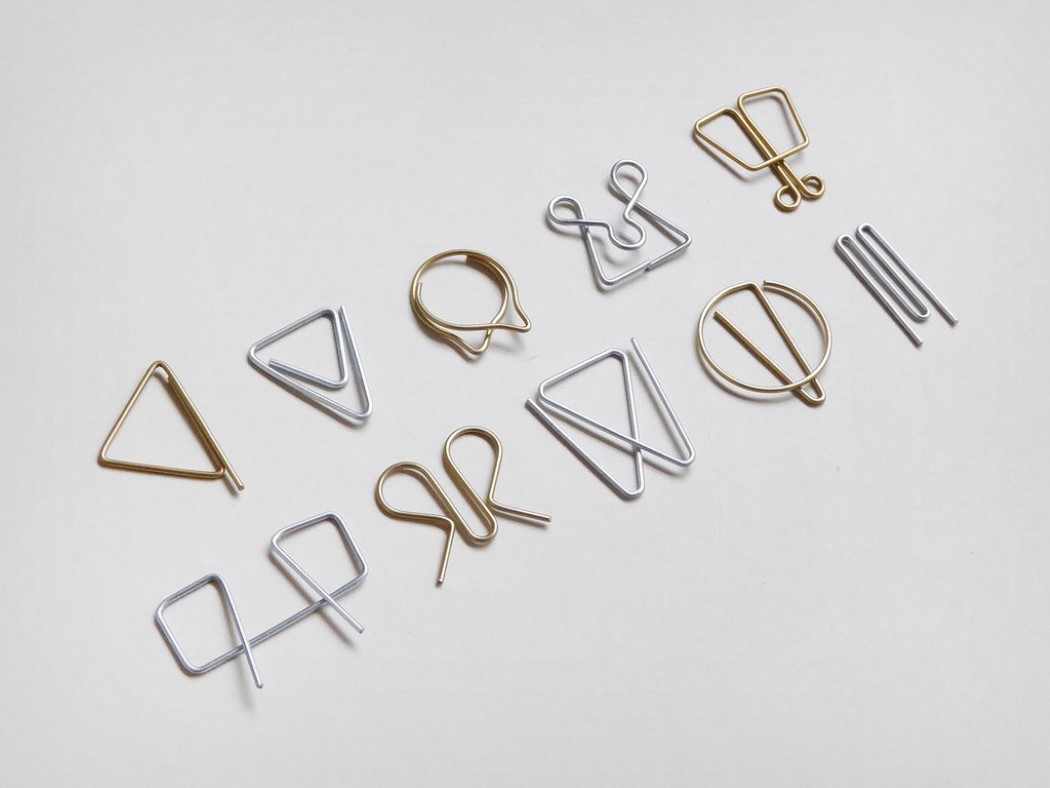 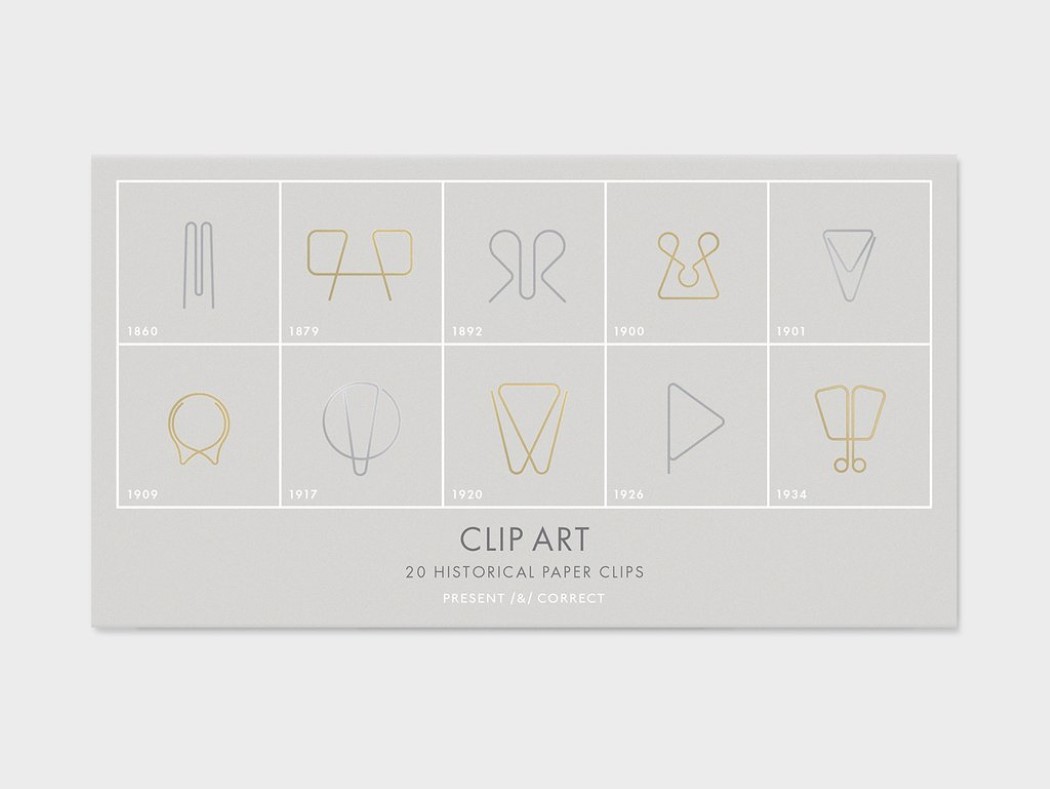 Clip Art by Present & Correct is a wonderful history lesson in paper clip design. The series features ten different paper clips from 1860 to 1934, recreated from ancient patent records. The Clip Art is a series worth collecting and admiring, especially for the way it captures how subtly different paper clips looked during the Art Nouveau and Art Deco periods and possibly even how visual styles could be partially dictated by industrial production techniques. 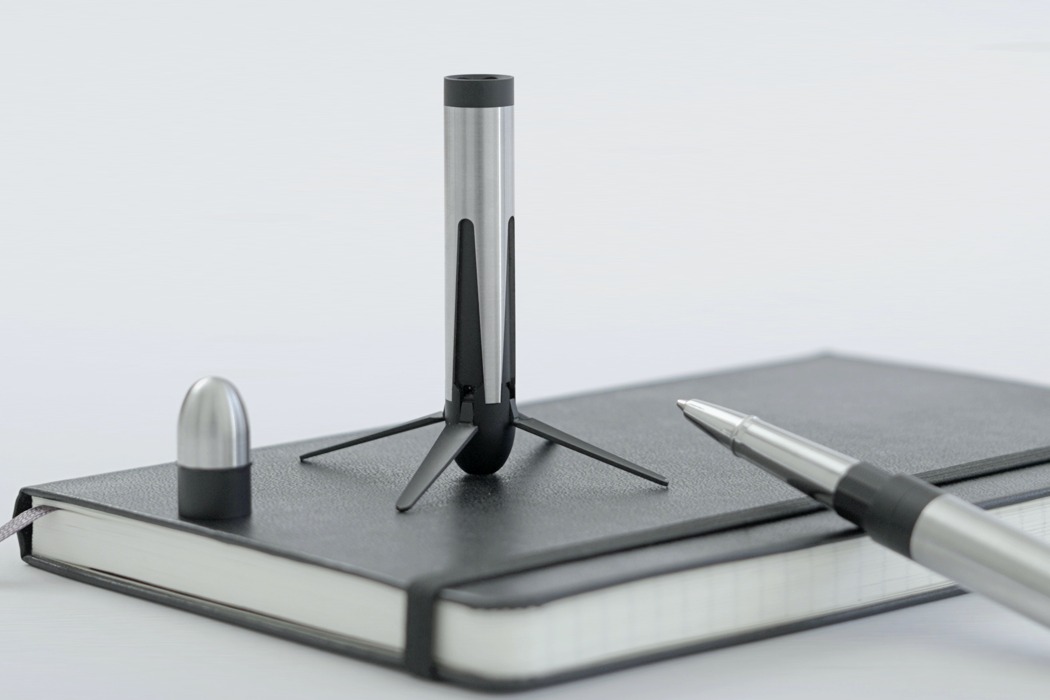 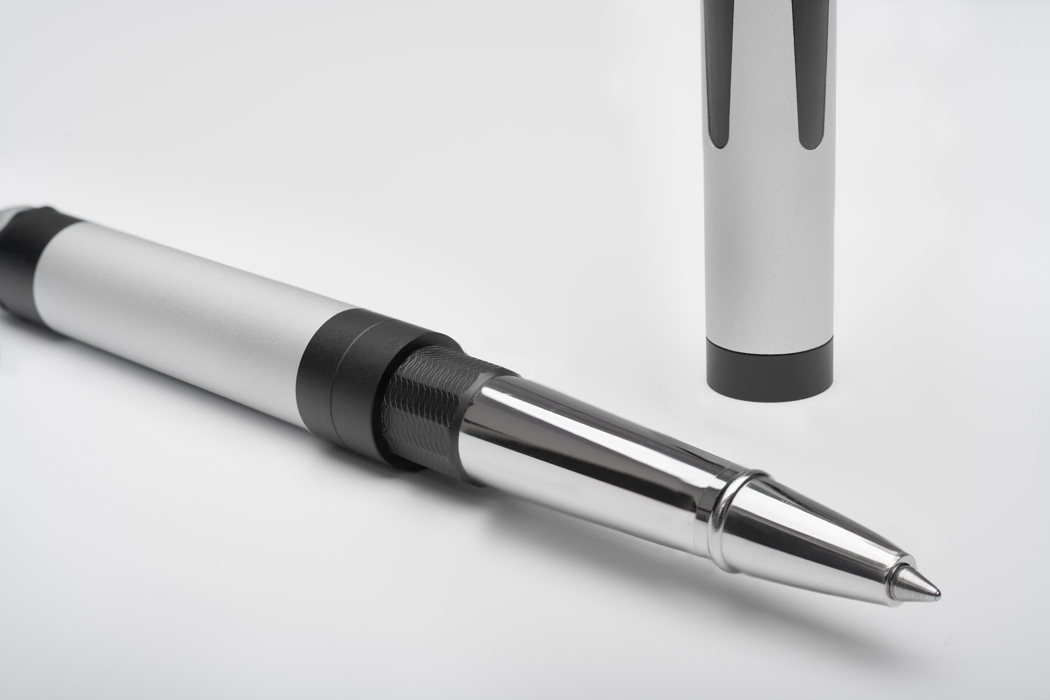 Designed as a celebration of SpaceX’s recent achievements of being the only private company to send humans to the ISS and bring them back (while even retrieving parts of the spaceship to be reused at a later date – something nobody’s ever done), the Nominal Pen models itself on the Falcon series of rockets (the Falcon 9 Block 5 in particular). The pen comes in a similar light+dark metal finish, featuring four retractable legs that open out, allowing it to stand vertically on its own… after all, it would be quite shameful to have to put a rocket-shaped pen in your pen-stand, right? 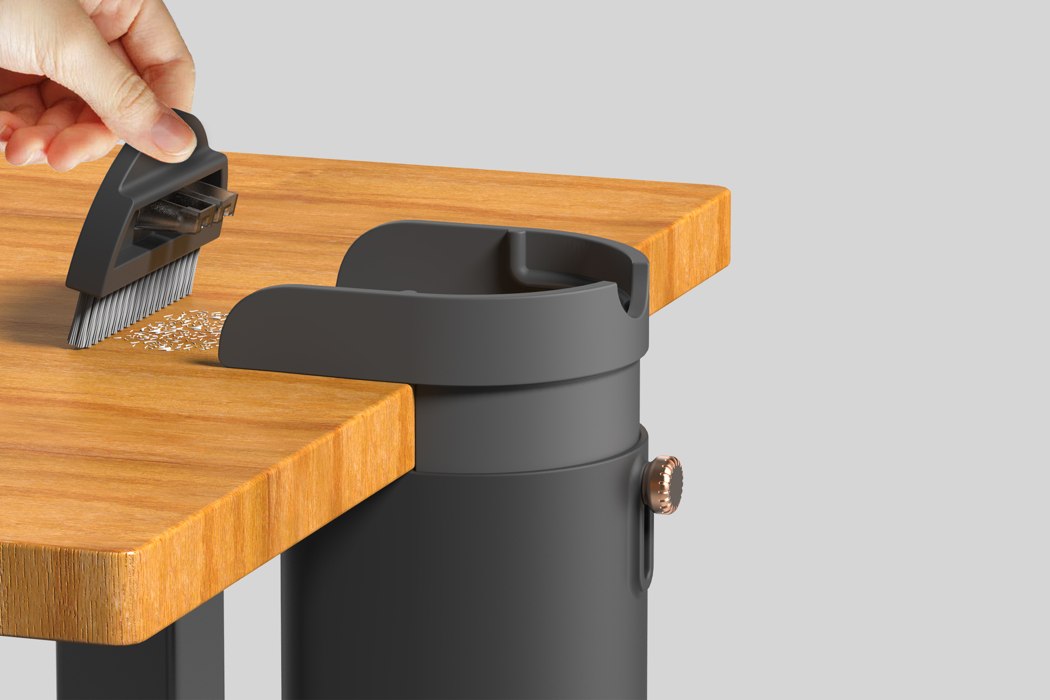 Clamp Basket by Seungwan Kang & Seonhee Shin does pretty much exactly what it says on the tin; it’s a small container that attaches to the side of the desk and allows the user to collect the rubber residue that is strewn across the work surface. A compact brush is neatly integrated into the top of the bin to ensure that every last bit of rubber is disposed of! Also featured on the top of the device is a pencil sharpener, which directly takes care of those annoying pencil shavings. Be it pencil shavings, crumbs, or even waste tissue, we think the Clamp Basket is a glam addition to every desk!

The world’s largest bird is here to store your paper clips! The Running Ostrich by Arthur Xin is a shiny metallic ostrich skidding along in red sneakers and simultaneously holding your paper clips for you.

Modeled on an abandoned stretched Eames Fiberglass Shell Armchair at the Henry Ford Museum, the design imagines the lost prototype reborn using the most modern…

Power on a Roll

Rolling Snake G1 combines the protective properties of cable bridges with the flexibility of classic extension cables on a cable reel. This all-in-one extension cable…

The Enexebre chair isn’t just natural-looking, it’s also nature-focused! Made with wood and left-overs from industrial production like wood shavings, mixed with bio-resins and natural…