Once upon a time, it took 73 cranks on his pepper mill to season one single piece of steak. He counted, Cleve Oines that is, the founder of MÄNNKITCHEN and creator of Pepper Cannon, the new pepper mill that peppers steak with only seven cranks. Try saying all of that five times fast. Oines both designs and cooks, so he made Pepper Cannon putting quality (and taste) above quantity – although you should prepare yourself for a lot of pepper talk. Cranking pepper mills again and again over your dish can sometimes feel like more work than the payoff provides – with Pepper Cannon, all it takes is half of a spin and you’ll be asking for seconds.

Pepper Cannon is just about half a foot in length and weighs only one pound, and with a generous pepper holding capacity of half a cup, it brings a whole new spicy ‘tude to pepper grinding. The body and construction of Pepper Cannon are partly to thank for its superior pepper-grinding capabilities. In order for the inner mechanisms to work smoothly, Pepper Cannon is milled from solid masses of Aerospace Grade Aluminum and then, anodized black, or coated with a protective layer of oxide, to make the surface not only durable but also easy to clean. On the choice to construct Pepper Cannon through milling, Oines says, “Metal construction allows us to achieve the very strict tolerances required for precision parts to produce exceptional results while adding strength and durability.” Building its body out of metal, with a stainless steel interior is what allows Pepper Cannon to work up to ten times faster than other top-rated pepper mills.

In order to avoid his burrs from grinding too close, Oines was sure to use high-carbon stainless steel when constructing Pepper Cannon’s interior burrs, which are powered by a heavy, double-bearing supported driveshaft. This attention to detail is exactly what gives Pepper Cannon an edge over other pepper mills on the market. Oines knows that consistency is everything when it comes to grinding pepper, so the stabilized drive shaft and precision burrs make it so particles of pepper larger than what the grind setting allows will not pass through and end up on your dish. In addition to a sturdy shaft and razor-sharp burrs, Pepper Cannon’s grind adjuster can be found on the base of the product. The grind adjuster implements dual spring-plungers and detents so it locks in place once you decide on your preferred grind of peppercorn. When it comes to your ideal mesh or coarseness of ground pepper, Pepper Cannon can grind from eight to over sixty mesh, which means its grind range is almost double that of an ordinary pepper mill’s grind range. The Pepper Cannon is also easy to fill back up, with a top that pops off with the push of a button and easily locks and clicks back into place once filled.

Pepper Cannon’s got it all. No more are the days of awkwardly waiting to say, “When,” as our waiter endlessly cranks more and more pepper onto our dinner plates. Say goodbye to settling for pepper shakers after your plastic pepper mill cracks and warps from excessive use. With Pepper Cannon, excessive use is encouraged and expected. With a name like Pepper Cannon, how could it not be? 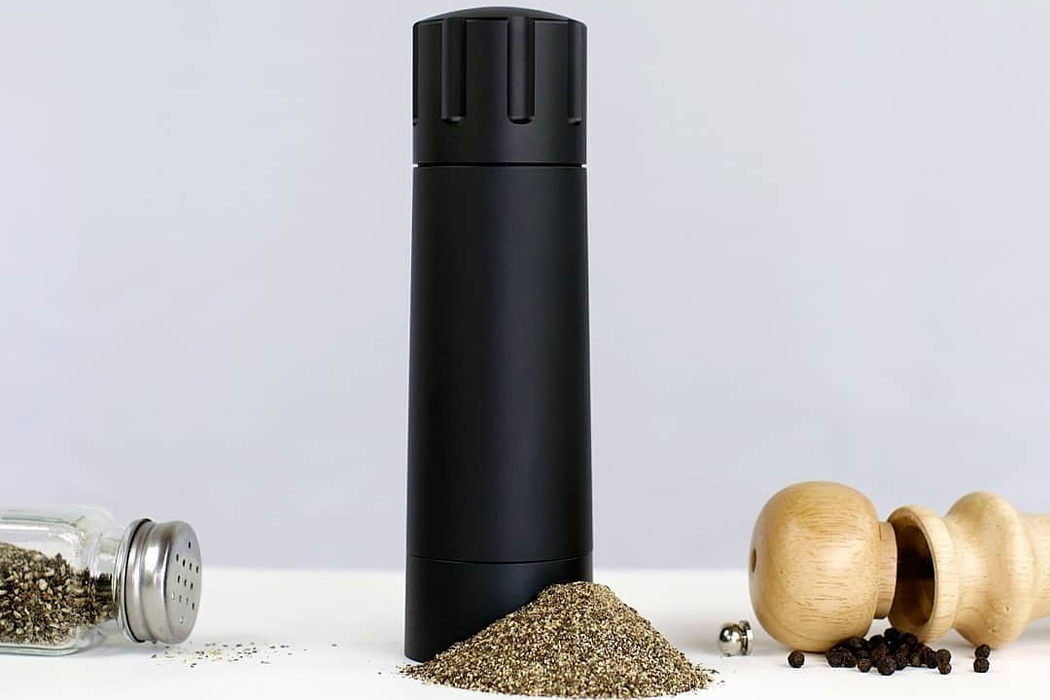 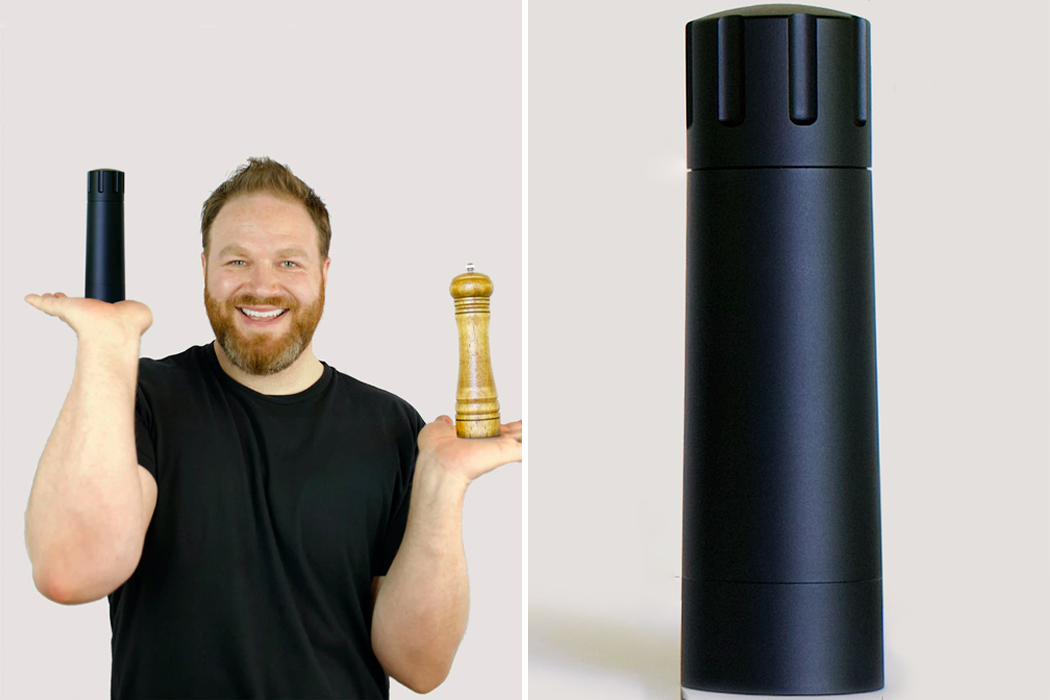 A countless number of cranks later and your sunny side up’s still don’t have that kick you were hoping for – you should already be finished eating by the time it takes an old-school pepper mill to sprinkle a little spice on top of your breakfast. Pepper Cannon take half of a spin and bon appétit!

Grind a bunch into the cup, then pepper all at once.

The all-too-familiar struggle of loose parts and inconsistent pepper grind – the parts of classic pepper mills just don’t have the same endurance as Pepper Cannon. Check out the inside of Pepper Cannon below.

The MÄNNKITCHEN pepper mill features a removable base cup so that after you season one side of your steak, you won’t have to worry about getting your hand all bloody before grinding more pepper. Just twist off the base cup and sprinkle some more pepper on the other side.

Burrs are made of hardened high-carbon stainless steel. 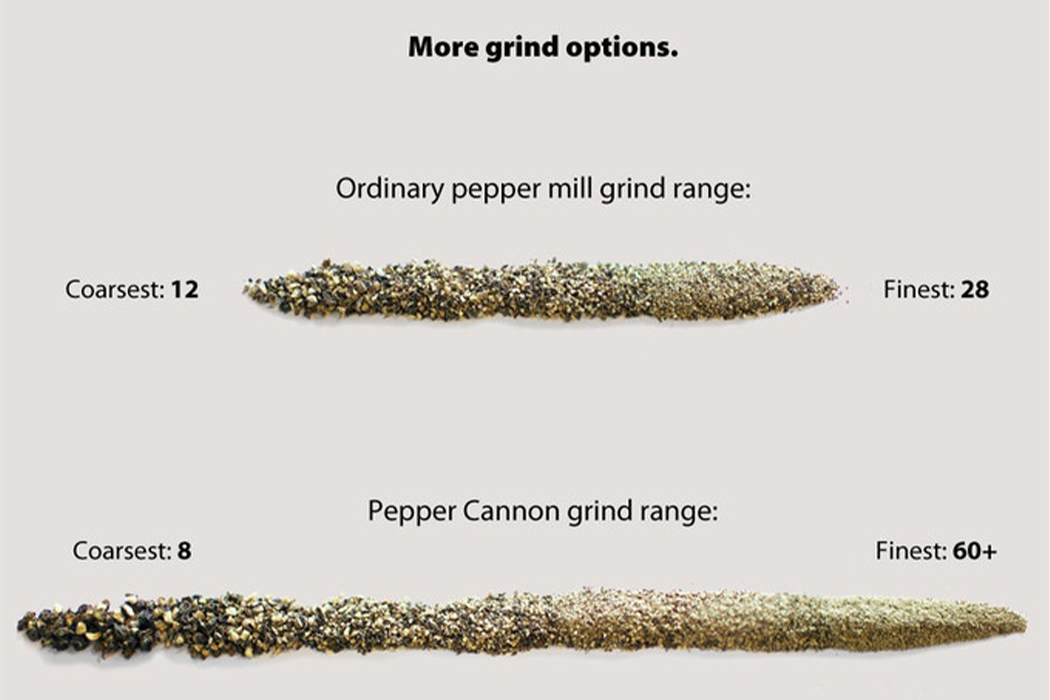 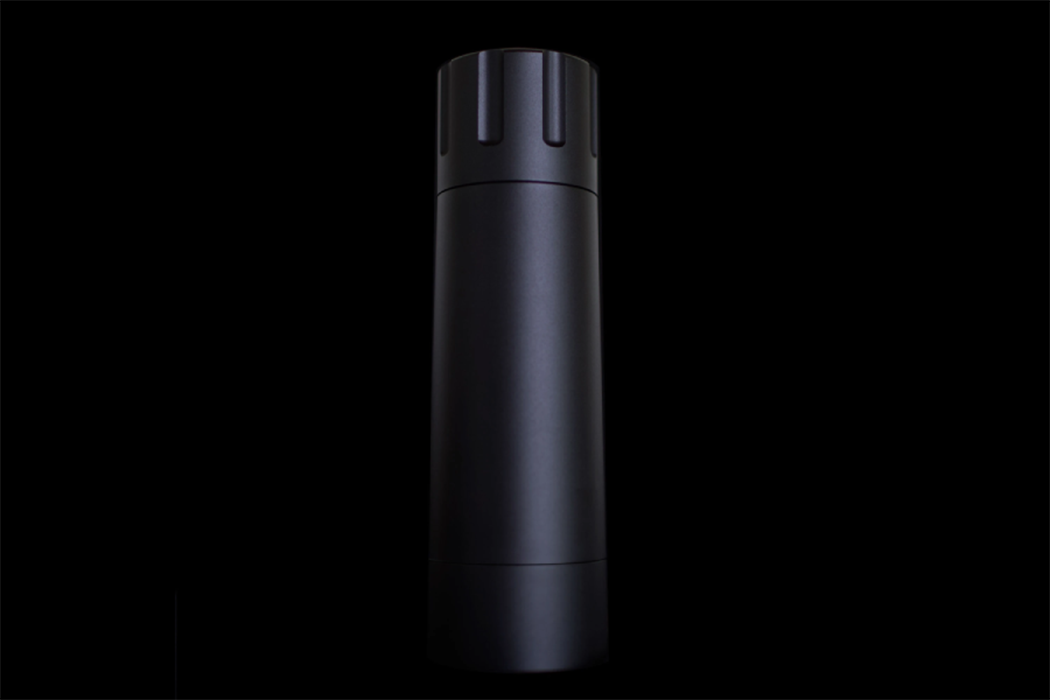 Mercedes Getting All Domestic On us

The likelihood of Mercedes-Benz pursuing the home appliance industry is very low… but that doesn’t mean we can’t ask “What if?!”. PDF HAUS explores what…

Stumped By A Tree

The idea behind the Tree & Root Lamp is to make us aware of the fact that we are cutting down way too many trees….

Why do hair-dryers look the way they do? I have a few theories (I may be wrong, but let’s dig in anyway)… Based off the…

A Sculptural Twist on the Speaker

This has gotta be one of the most beautiful and bizarre standalone speakers we’ve ever seen! It explores using narrow, rolled strips of beech wood…