Ask someone to draw a comms device, and chances are, they would draw a bulky headset-shaped product that covers either one or two ears, and has that weird protruding microphone that sits in front of your mouth. It’s just how iconography works though… The symbol of a camera still looks like a conventional DSLR, and that ‘Save’ icon still looks like a floppy disc, which hasn’t been used in over two decades. However, just like cameras have evolved into devices that are much smaller than a conventional DSLR, and storage has moved FAR beyond the capabilities of a floppy disc, MILO hopes to give the comms-device its much-needed upgrade.

Say hello to MILO. It looks nothing like a traditional comms-device or a walkie-talkie, but it’s perhaps the most advanced consumer-grade communication system ever made. In fact, I like to think of the MILO as something Steve Jobs would think about. It ditches the notion that communication devices need antennas, earpieces, and near-the-mouth microphones. Just strap the MILO to your arm and it lets you talk to other MILO wearers in a completely hands-free format, without touching any buttons, giving any commands, or dialing any numbers.

MILO creates a mesh network that allows multiple devices to communicate with each other. Designed to work irrespective of the limitations of Bluetooth ranges, cellphone coverage, or internet availability, MILO’s network of devices are perfect for the outdoors. Just pair multiple units together and you effectively create the audio equivalent of a ‘group chat’ that lets you talk to your friends naturally, without dialing anyone or pressing any button. MILO comes equipped with its own speaker and built-in microphone, allowing you to talk naturally to your mates without holding the device close to your ear/mouth. A powerful 6-microphone setup captures crisp audio, while a noise-reduction algorithm within MILO helps cut out any background noise like wind, waves, or rain – making it perfect for when you’re surfing, biking, or skiing.

Designed to be to walkie-talkie equivalent of a GoPro, the MILO is the perfect ‘action communicator’, allowing you to stay in touch with companions while engaging in outdoor activities. The device comes with its own wireless mesh network system and dual-band radio antennas that promise a connection that’s most seamless and encrypted. You can either use the MILO as a wrist-worn device (thanks to the magnetic-closure wristband that comes along with it), or connect it to your helmet while riding or skiing. Additionally, if you’re in the outdoors on a trek or birdwatching, the MILO supports Bluetooth earpieces too, letting you use your wireless earbuds to communicate with other users. The device itself challenges the very notion of the comms-unit, with a form-factor that’s no larger than a hockey-puck. Its minimal design ditches the antiquated external antenna for a sleeker silhouette, and comes with volume buttons as well as a mute microphone button to silence your mic (a feature you’re probably familiar with, after 8 months of using Zoom)… while the construction of the MILO reinforces its ability to be used in practically any setting. The IP67 waterproof enclosure means MILO can be used not just in the rain, but while surfing too, and its robust build lets you use it around dust, mud, harsh sunlight, or even in the snow. The device comes with a USB-C port to juice its internal battery, which delivers a full day of use on a full charge, and a companion smartphone app lets you send OTA upgrades to your MILO to make sure you’ve always got the latest software and features to chat wirelessly and hands-free, practically anywhere on the planet. 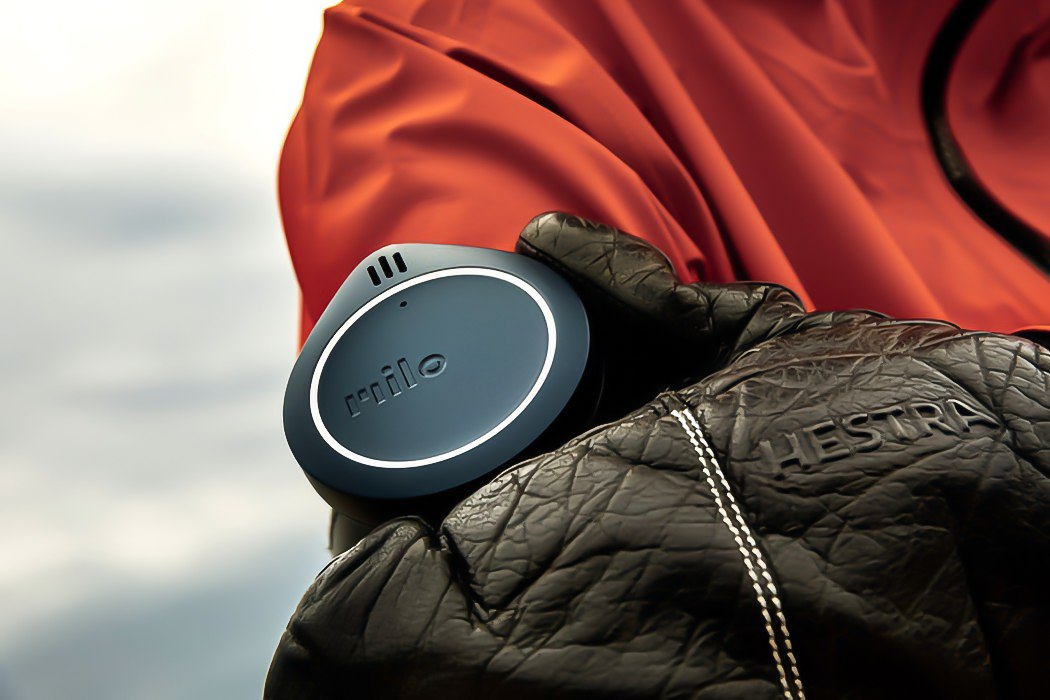 Milo lets you speak with your group naturally and hands-free so you can keep your eyes on your surroundings. No Wi-Fi or cell signal needed.

Milo makes it possible to truly share adventures with friends and family.

Clip on your MILO and you’re ready to go – simply talk and hear everyone in your group, like being near each other even when apart. MILO gives you voice notifications about battery level, successful grouping confirmation, when someone goes out of range or re-joins your group, and more. 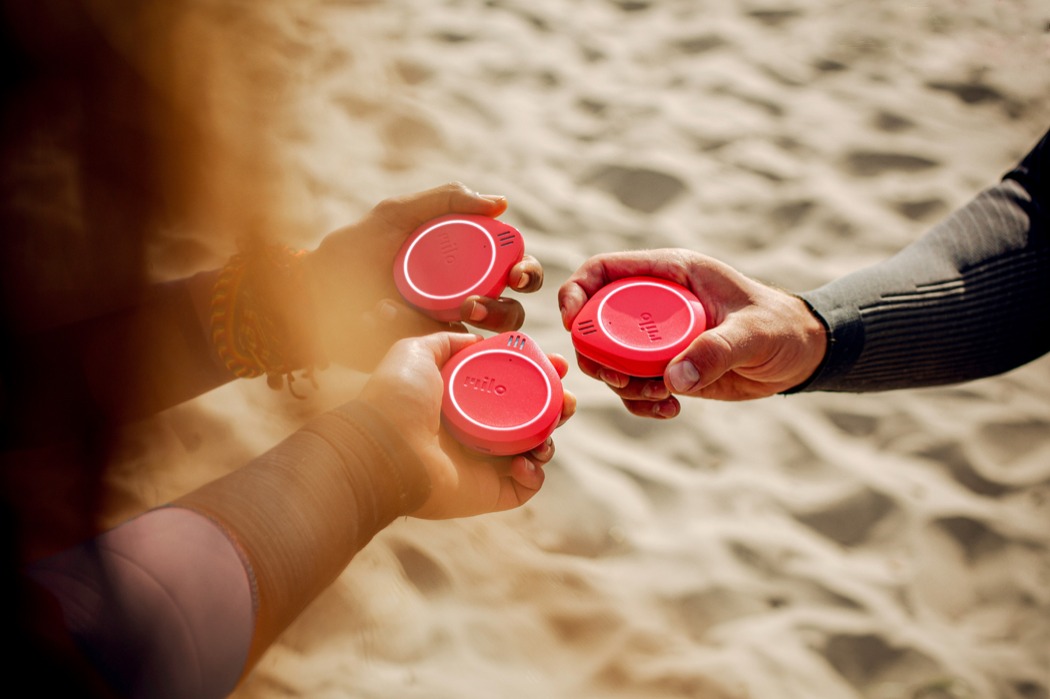 Traditional walkie-talkies suffer from severe limitations: you have to push-to-talk, only one person at a time can talk (half-duplex), poor audio quality, no wind noise suppression and they are often hard to use. Not to mention, most are bulky and heavy and conversations are not private. 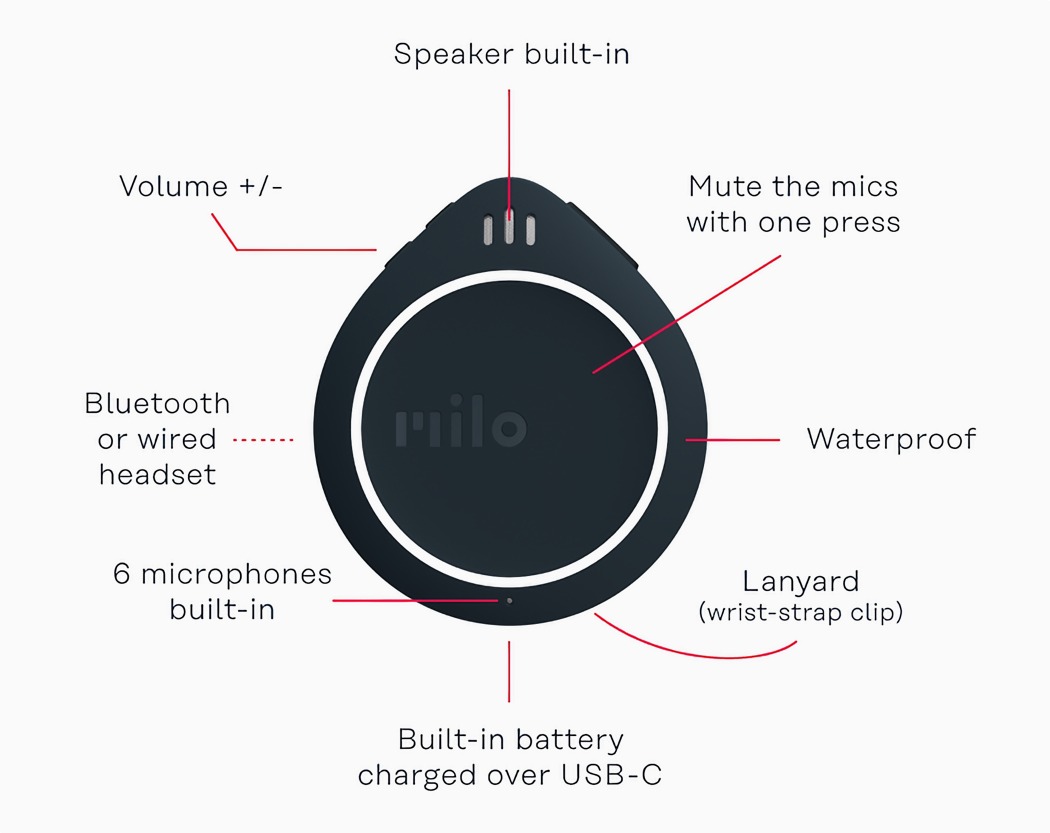 MILO integrates six high-performance digital microphones and a powerful speaker so you can be heard clearly and hear everyone in your group, even in noisy outdoor environments: sophisticated audio signal processing algorithms suppress wind and other background noise.

In addition to MILO’s integrated microphones and speaker, you can optionally pair MILO with a Bluetooth headset or plug in a wired headset. MILO provides an open voice connection to your group but with a single click you can mute your microphone while still hearing the conversation. Your conversations are encrypted, private and secure and can only be heard by people in your group.

The Milos in your group create a secure mesh radio network and you don’t need Wi-Fi or cell signal.

At the core of Milo is the MiloNet protocol. It provides proactive routing to quickly adapt the network topology to moving Milo nodes and changing conditions, tolerance to high packet loss and quick convergence to correct routing. Here’s a demo of the MiloNet protocol, illustrating quick route formation and route stability.

The range between any two Milos is 600 meters / 2000 ft for multi-way voice, and this is extended by the MiloNet mesh network when your group spreads out. We have a long-range mode currently in development and in our testing we exceed > 1 mile (1.6 km). Milo will constantly improve: we’ll release new features with regular software updates.

The grouping process is very simple – bring your MILOs close, press a button and wait for the audible notification. You’re connected!

The MILO clip uses magnets to snap in your MILO, triggering a secure mechanical lock. The clip can be attached to a bag strap, armband or bike handlebars and will not detach even if you fall or ride over bumps. MILO will not fall off, even if knocked or pulled.

Works In All Conditions 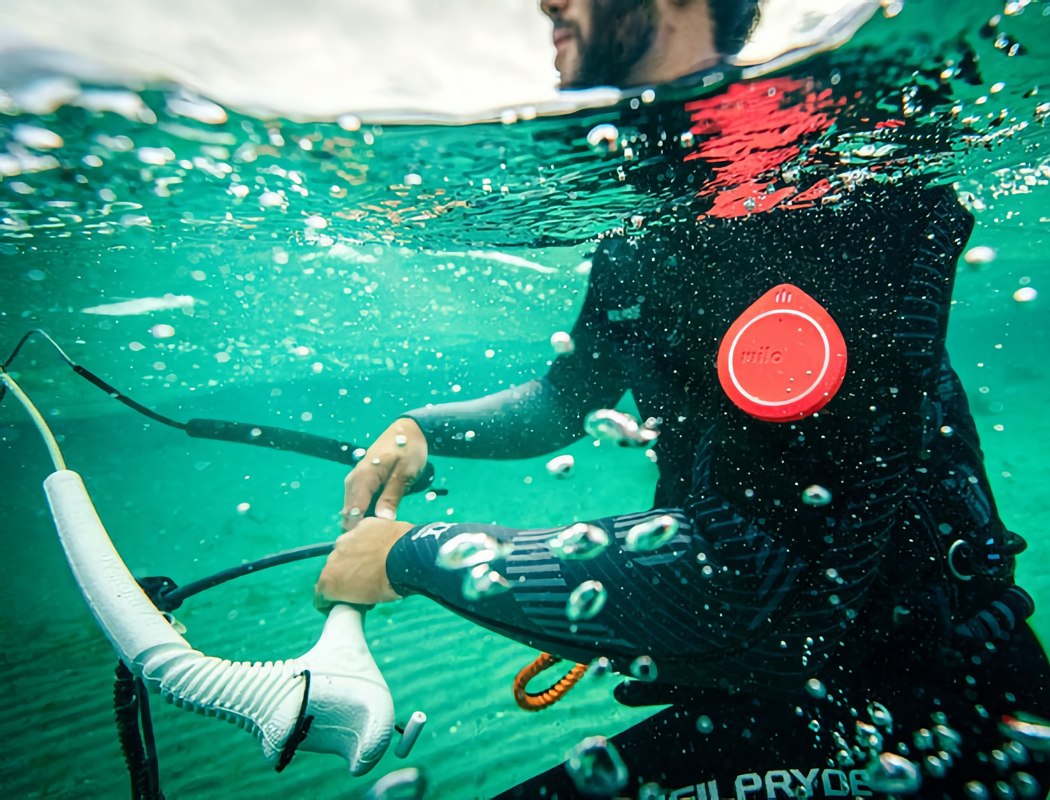 MILO is waterproof and dust proof with an IP67 rating and can be fully submerged in water. It will work in the freezing cold or in direct sun, so you can safely bring Milo along on a dusty road bike, ski or surf adventure. 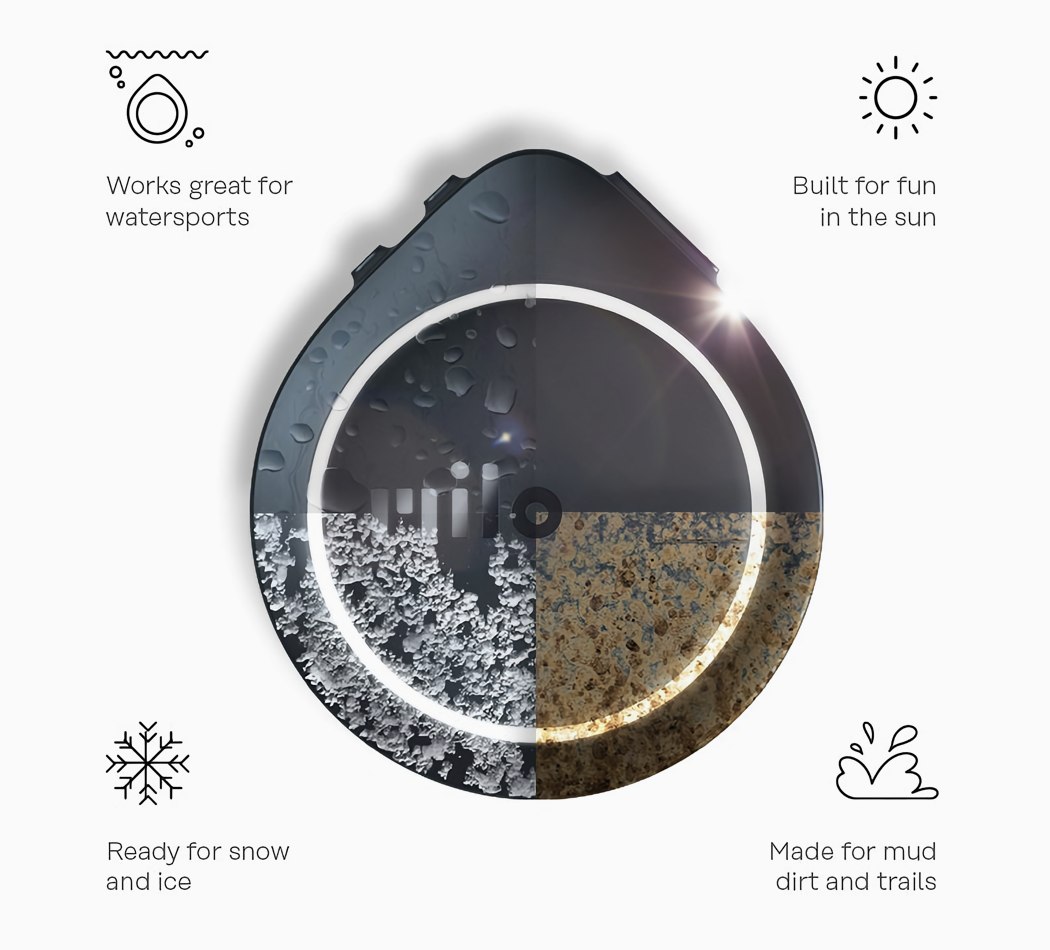 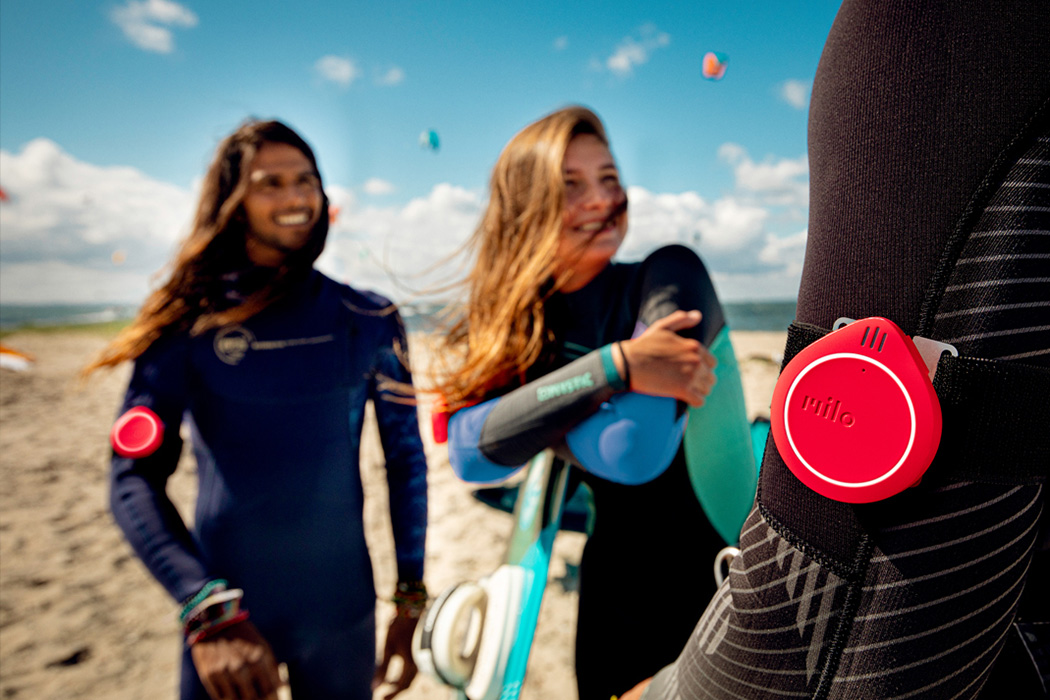 A Cast That Doesn’t Suck as Much

If you’ve ever broken a bone, chances are you remember just how inconvenient it was to have a heavy, itchy, not-so-hygienic cast. It’s almost as…

We’ve all thought about it: you use a public restroom, wash your hands and then have to touch an unsanitary doorknob to leave the restroom?!…

The Downhill Machine isn’t your conventional longboard. With the adjustability of a race car packed into a skate, the DM was made for speed. Each…