Five months ago, not everyone knew what an N95 mask was… today they cost up to 100 times what they were originally worth just because of the crushing demand globally. Chances are we’re probably going to need to wear this mask more often than not. With disease outbreaks, natural disasters, and bad air-quality in most urban cities across the world, masks will almost certainly become more commonplace, so it’s best if we reconcile with the fact that the N95 mask, as highly coveted as it is, is far from perfect. In fact, it’s quite bad.

There’s an inherent set of problems with the common N95. A, it’s a struggle to breathe through, especially for long intervals, B. it’s uncomfortable having that humid air circulating around your mouth, C. for 2/3rd of the world’s population, it fogs up glasses, and D. it needs to be disposed of after a certain point of time. The N95 mask isn’t great, and Leandro Rolon and his team set out on a mission to make it better.

Rolon, an architect, designer, and CEO of his own 3D printing company, realized what a big problem it was breathing polluted air in China, where he had set up his studio. Air quality isn’t a problem you can fix short-term, and while governments still fumble with this widespread problem, the only quick solution to breathing in bad air is to wear a mask… except these masks weren’t designed to be worn all the time. Leandro soon realized that the best mask was the one that solved the four aforementioned problems. It needed to be comfortable, and effectively circulate purified air so that you could breathe with ease, and your glasses wouldn’t get fogged up. The solution required scaling down an air purifier to something that was small enough to fit on your face. Calling it the ATMOBLUE, Leandro and his team developed an entirely new category of wearables that could actively purify the air of 99.9% of particles, pioneering a technology that made them sort of the Tesla of face-masks, as opposed to the N95 which only filtered 95% of the air. The mask featured “positive air pressure” which helped keep out germs and contaminants by making the air pressure inside the mask greater than the air pressure outside. Built-in fans pushed purified air right into the insides of the mask, allowing you to breathe normally, and one-way outlets got rid of the humid air, so your mouth never felt wet and sweaty. ATMOBLUE was designed as an upgrade to the N95, which almost every Asian wore outdoors. Its fan-operated purification system allowed people to breathe clean air easily (a feature that really helped people with inherent respiratory issues), and a comfortable silicone rim around the mask created a proper airtight seal, so air didn’t leak out – which ensured that you were breathing pure air at all times, and that if you wore glasses, they never fogged up. ATMOBLUE was designed and prototyped as an R&D project back in end-2017. The following year the product was commercialized and a little over 20,000 units were sold throughout Asia. The team even went on to receive great reviews and awards, such as a Red Dot Design Award, IDSA award and 1st place at the Techcrunch Shanghai start-up competition… then suddenly one day, the news of a mysterious viral disease broke out of Wuhan.

Quickly ramping up production to bring his easy-breathing mask to all the people who needed it, Rolon and his partners made a variety of upgrades and launched the mask on Kickstarter as a powerful, wearable version of your domestic purifier. Designed to be just as small as any conventional face mask (and weighing only 190 grams), ATMOBLUE uses two small yet powerful fans that pull air through HEPA filters. These filters snap right onto the mask and can easily be interchanged after nearly months of use, instead of throwing out your old N95 mask after 2-3 days of wearing.

ATMOBLUE was originally envisioned as a mask to protect people from harmful air particles such as PM2.5 (a mixture of small, solid particles and liquid droplets in the air), for people with respiratory issues, and for sportspeople who often need larger quantities of oxygen delivered to their lungs while exercising. Given that it’s inherently difficult to breathe through an N95 mask, leave alone breathing through one while you’re jogging down a trail and gasping for air, ATMOBLUE makes it feel like you don’t have a mask on. Air gets delivered directly to your mouth and nose, allowing you to breathe as easily as you would without a mask… additionally, the HEPA filters give you up to 99.9% air purity. The mask’s patented band system wraps horizontally around your head, giving you full freedom to move your head while going about your day, and especially while exercising. The internal fans, which come with three speed settings for airflow, are surprisingly noise-less (between 10-45 decibels), and despite the mask’s hard-body construction and air-tight seal, it doesn’t inhibit your ability to talk. In fact, vocal clarity is just about the same as with an N95 mask, so you don’t need to take ATMOBLUE off to have basic conversations.

ATMOBLUE’s filter system helps provide cleaner air, while the interchangeable filters save cost in the long run and generate significantly lesser waste. Each HEPA filter can be used for as long as 150 hours before needing to be changed (that’s two months of use if you wear a mask for less than 3 hours each day). Changing the filter is as simple as popping the magnetic cover off and switching the old filter-box for a new one. ATMOBLUE even comes with a smartphone app that gives you filter-health information, letting you know when to make the change, and an air-quality sensor on the mask even lets you know exactly where your neighborhood’s air ranks on the quality index. You can even set up your mask’s auto-air-flow feature on the app, allowing the fan speed to self-adjust by using algorithms to measure your breathing pattern… and when you do need a new set of filters (ideally every two months), you can order them right on the app.

To think about it, the only similarity between ATMOBLUE and an N95 mask is their overall size. The N95 mask is a garment, whereas the ATMOBLUE is a wearable purifier. As dystopian as it may sound, our future isn’t entirely insured against events that may require wearing masks… at least rarely, if not occasionally. Whether you’re a designer in a workshop, a worker in a factory, a scientist in a laboratory, or even a firefighter trying to rescue people through a smoke-filled building, ATMOBLUE helps by being a wearable that’s multiple times better than the current cloth-based alternative. It’s comfortable, secure, efficient, can be used multiple times… and just as an added bonus, looks much better than those clinical face-masks. 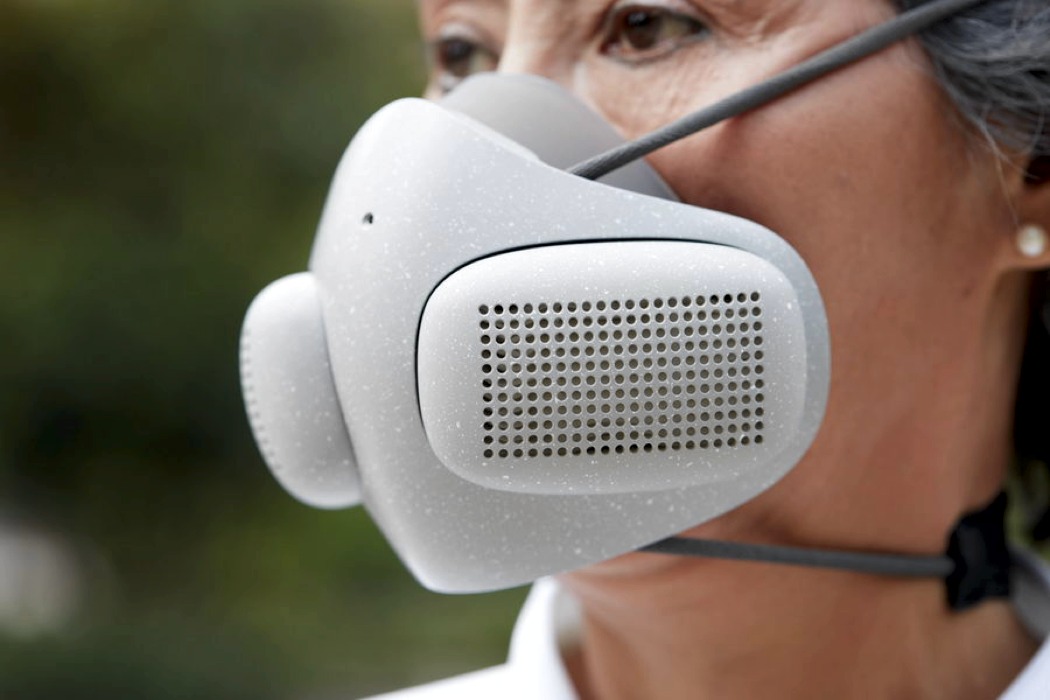 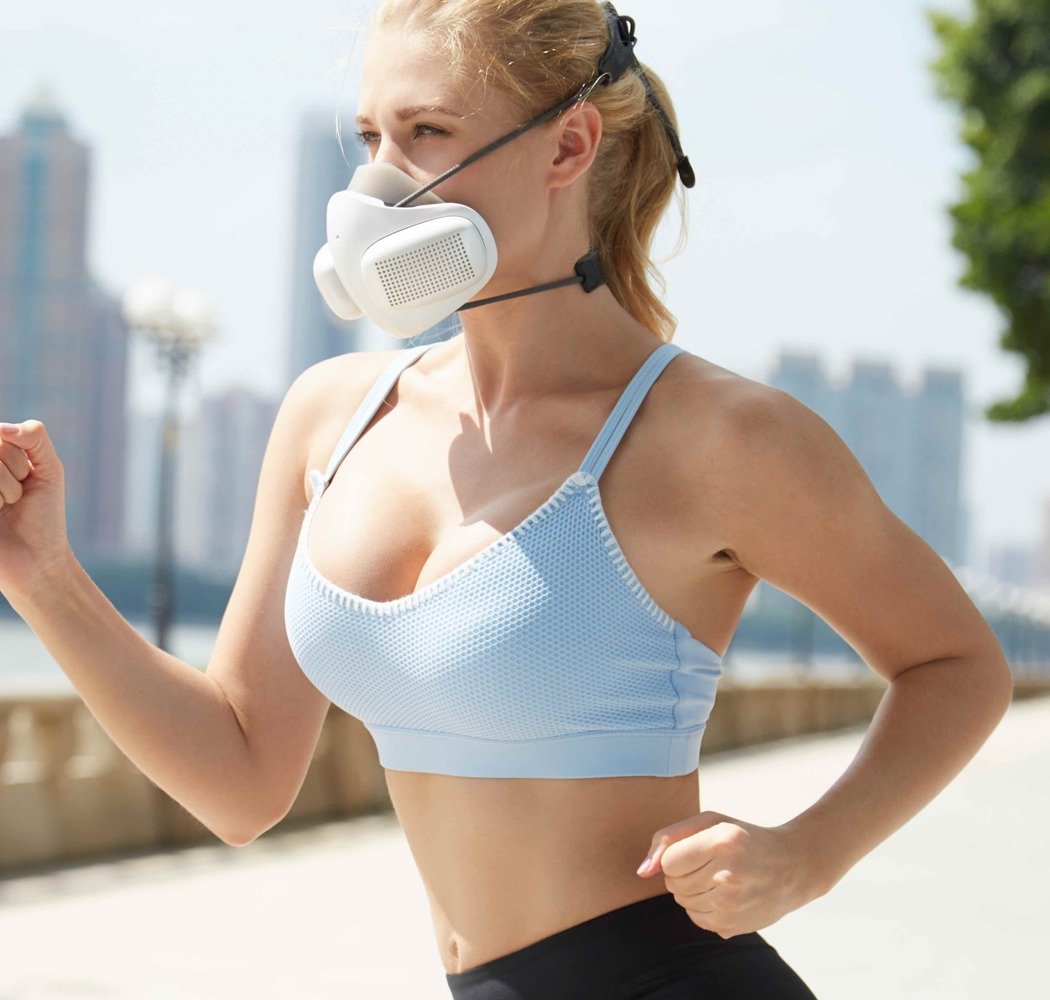 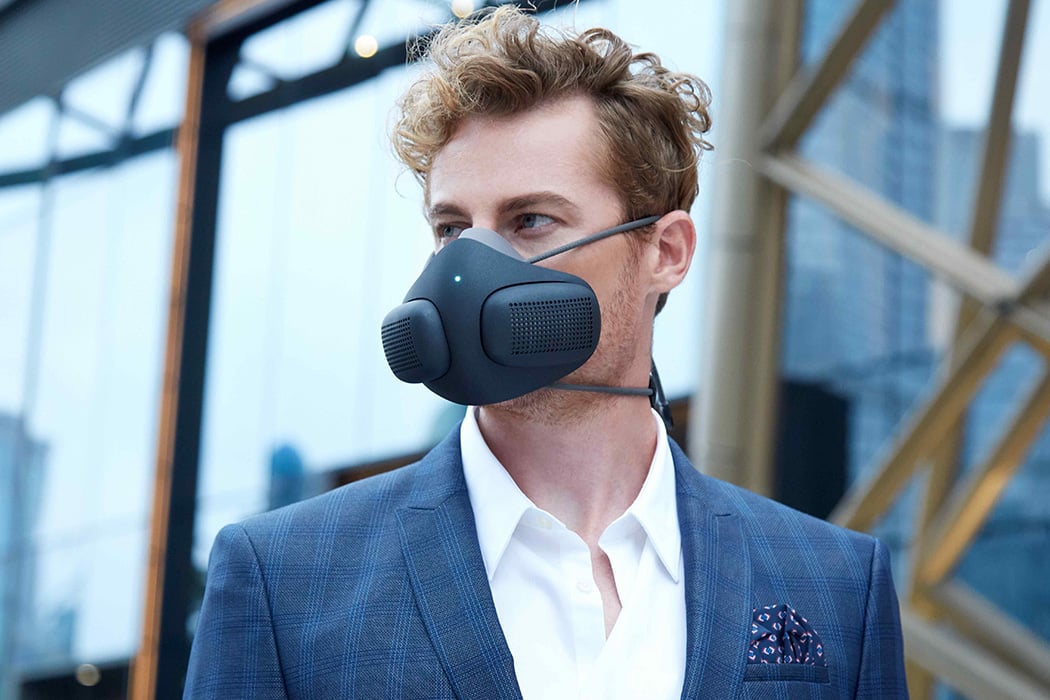 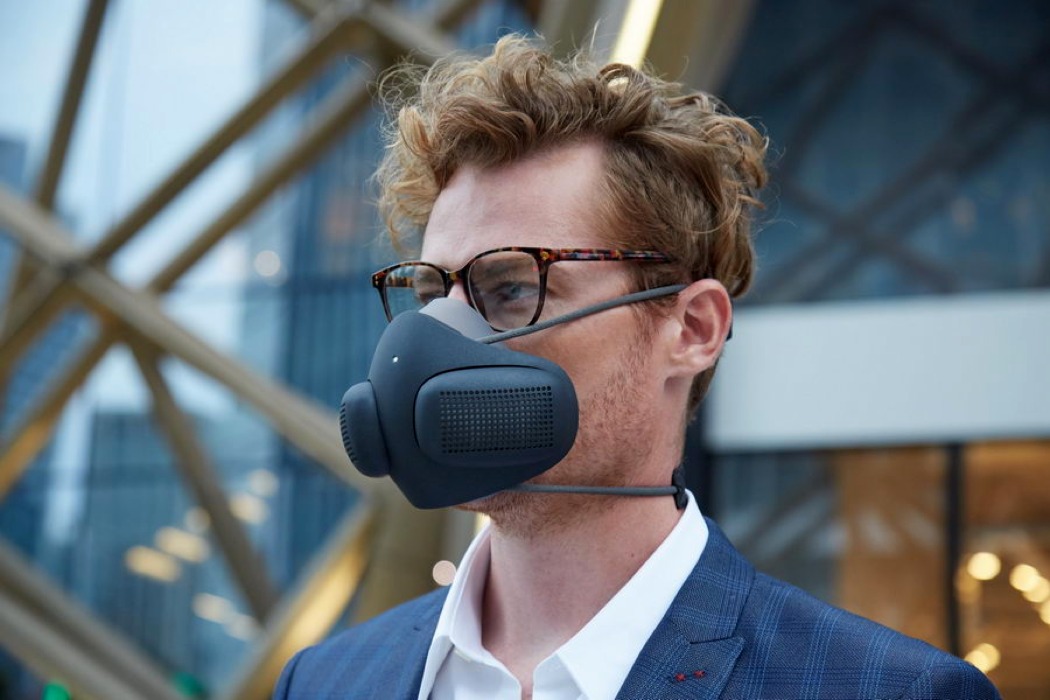 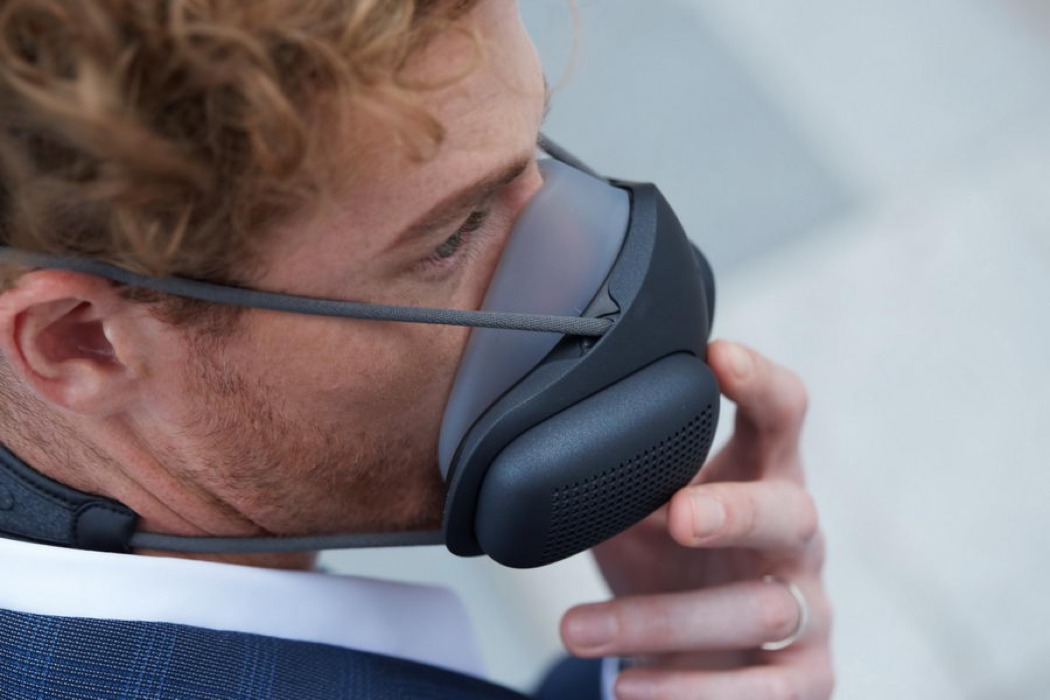 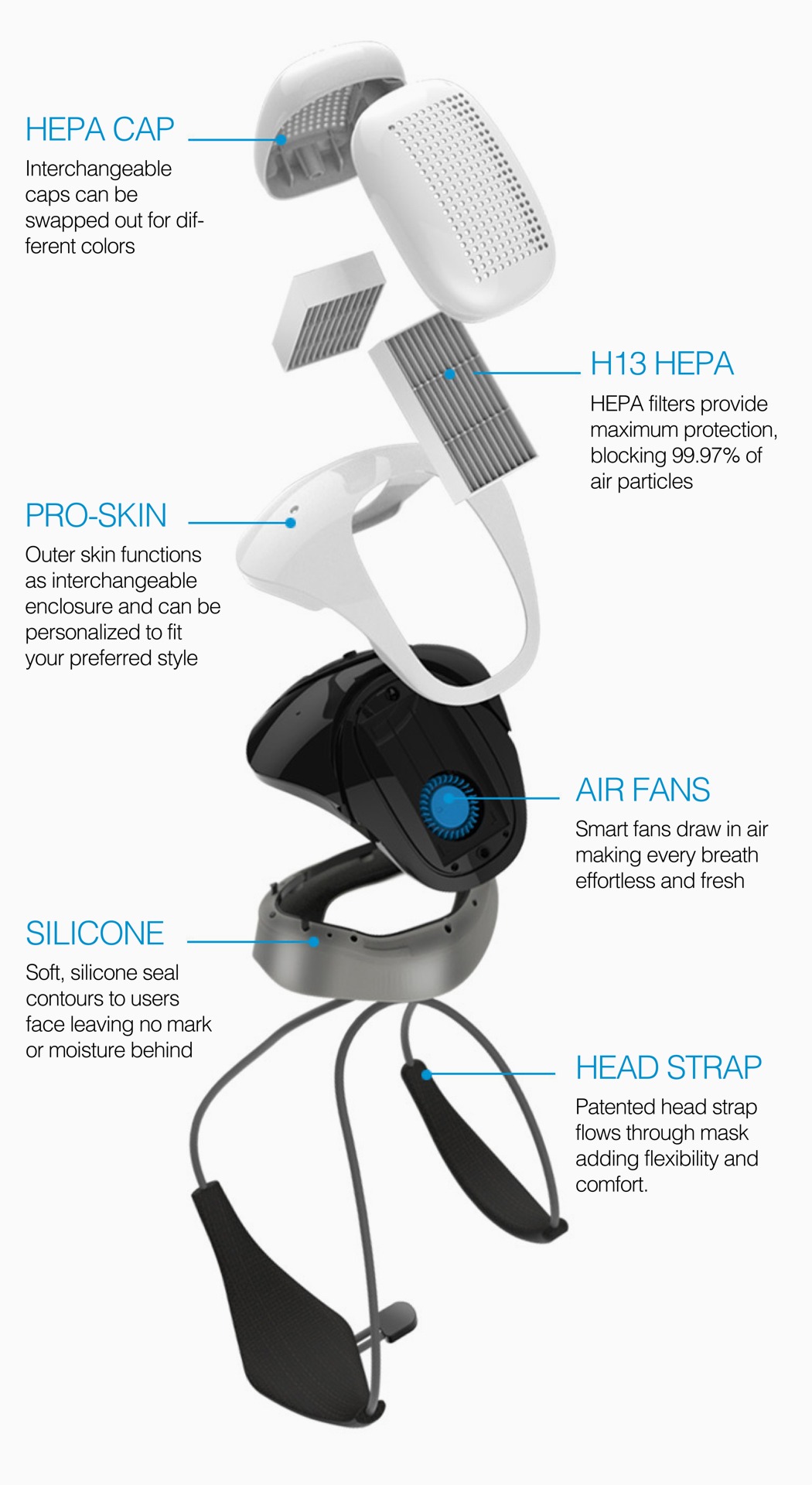 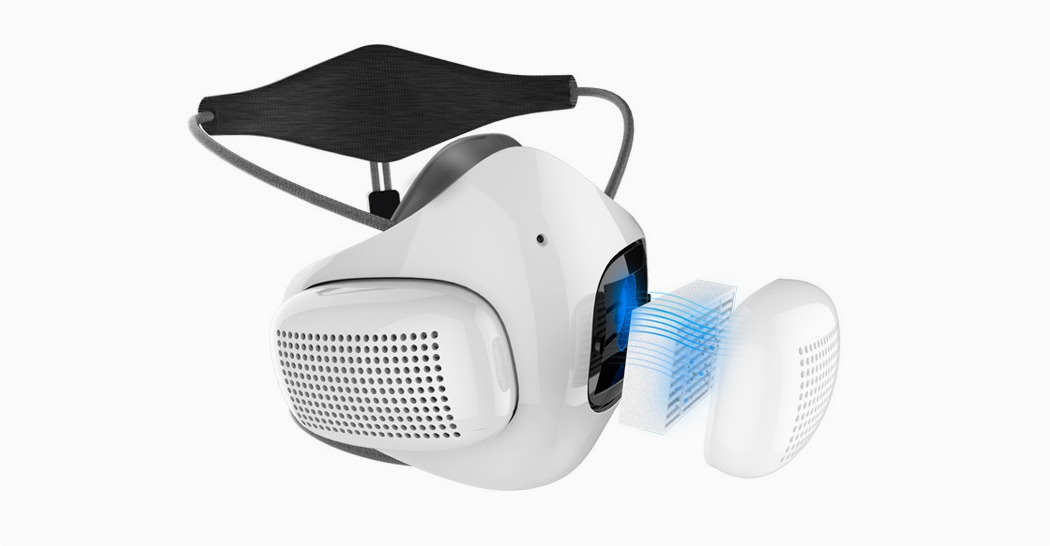 Traditional filters are flat and are quickly consumed. Their unique filters are made of up meticulous folds, compressing the flat surface area of two 9.5 squared inch sheets, into two compact filter blocks which slide right into your mask.

You may have heard the term N95. This simply means 95% of air particles are being captured. At the higher end of the spectrum, N99 (99%) masks are offered for more industrial applications such as painting or waste cleanup. Moving one step further ATMOBLUE’s, H13 HEPA filters block 99.97% of particles which are 0.3 microns in diameter or larger. To give you a bit of context, one strand of human hair is about 75 microns across. 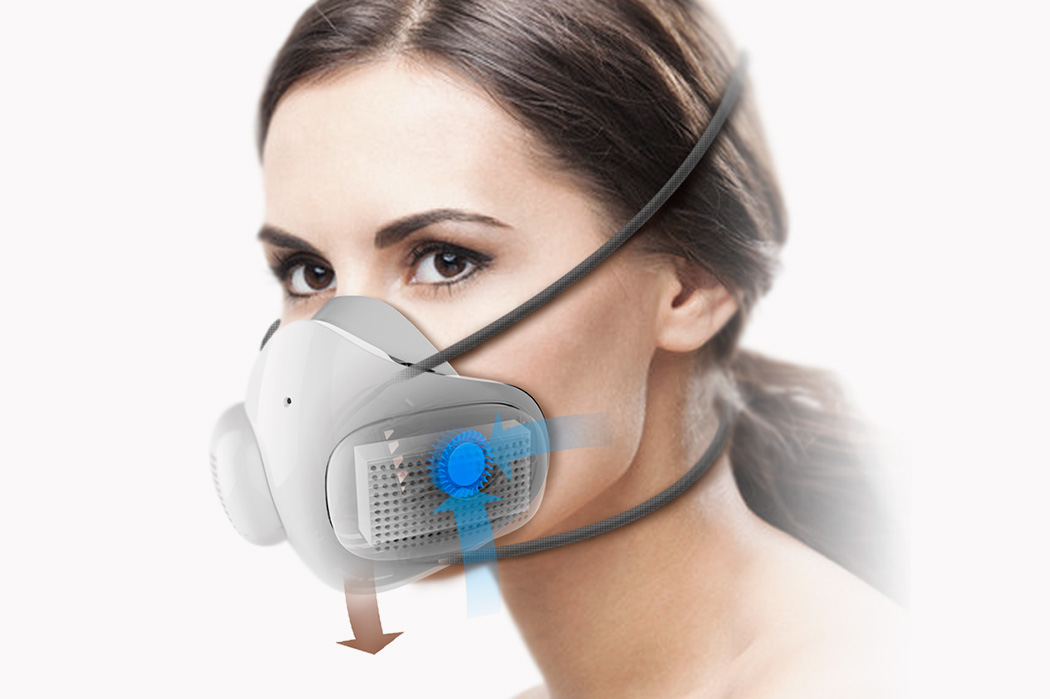 The term positive airflow means excess air or “positive air” being pushed into the mask and out through its vents. Because of this solution positive air pushes out exhaled air increasing the overall effectiveness of the mask by removing unwanted bacteria from the breathing zone. 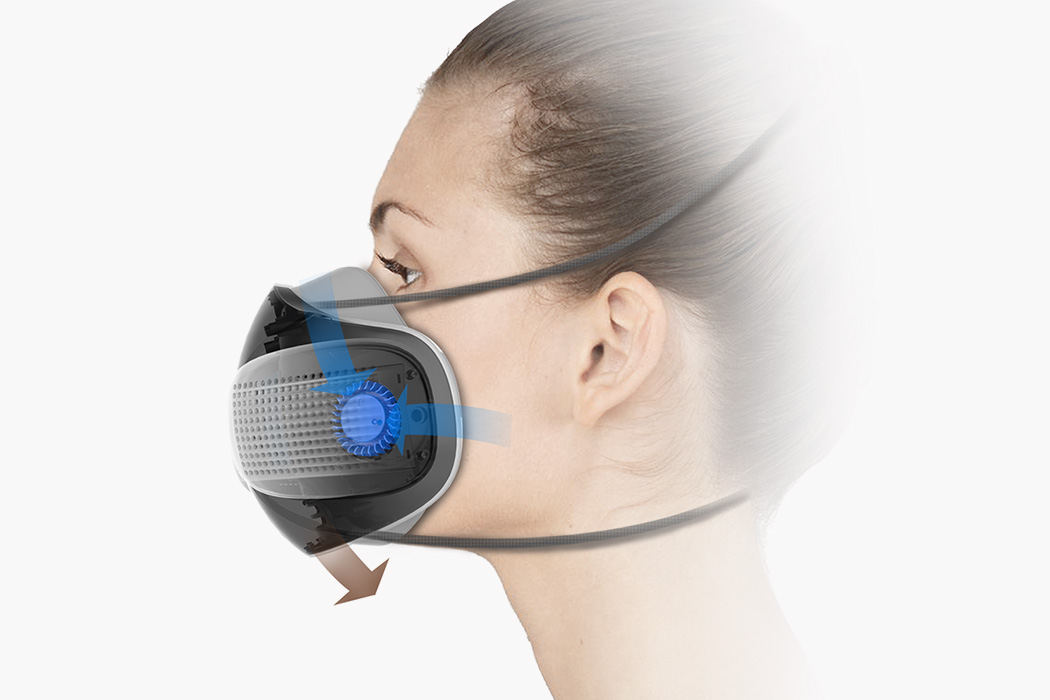 Designed for the most extreme conditions ATMOBLUE’s multiple airflow settings allow users to switch between light mode, when sitting idle on the train or a car, to high strength when jogging through the city or on the job.

Depending on your use, such as fan speed, your rechargeable ATMOBLUE system runs continuously from 3 – 5 hours. When battery life is running low a red indication light notifies users when to recharge. Simply plug into any USB port until your indicator light turns white again. 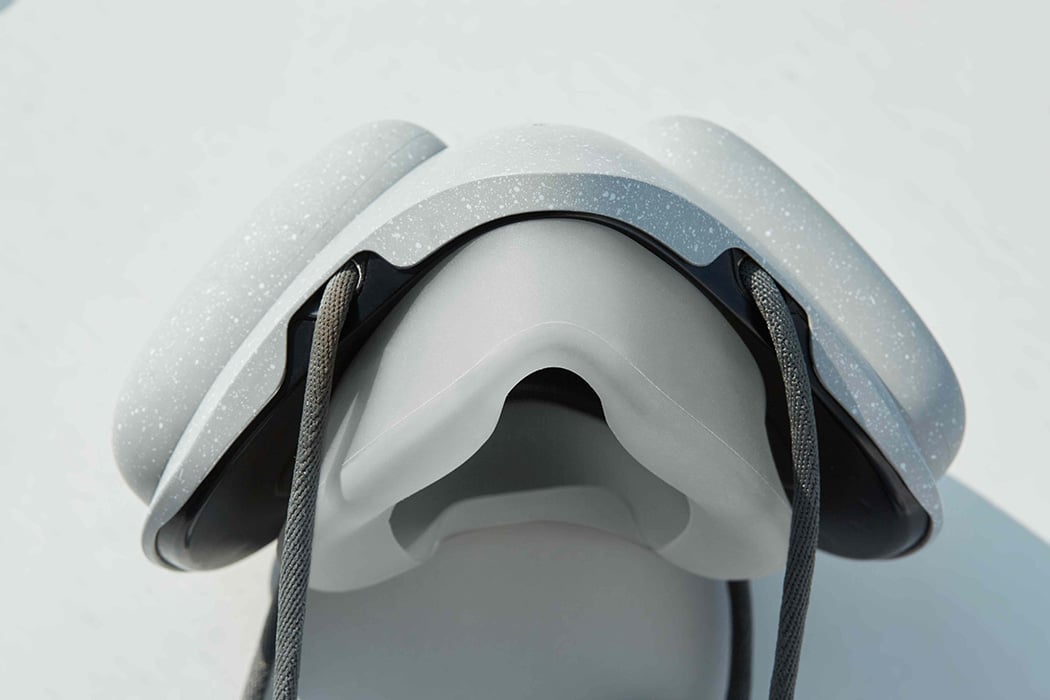 Dermatologically friendly silicone creates a soft but airtight seal keeping good air in and bad air out. ATOMBLUE won’t leave marks on your face after each use and can be worn with glasses without fogging up vision. 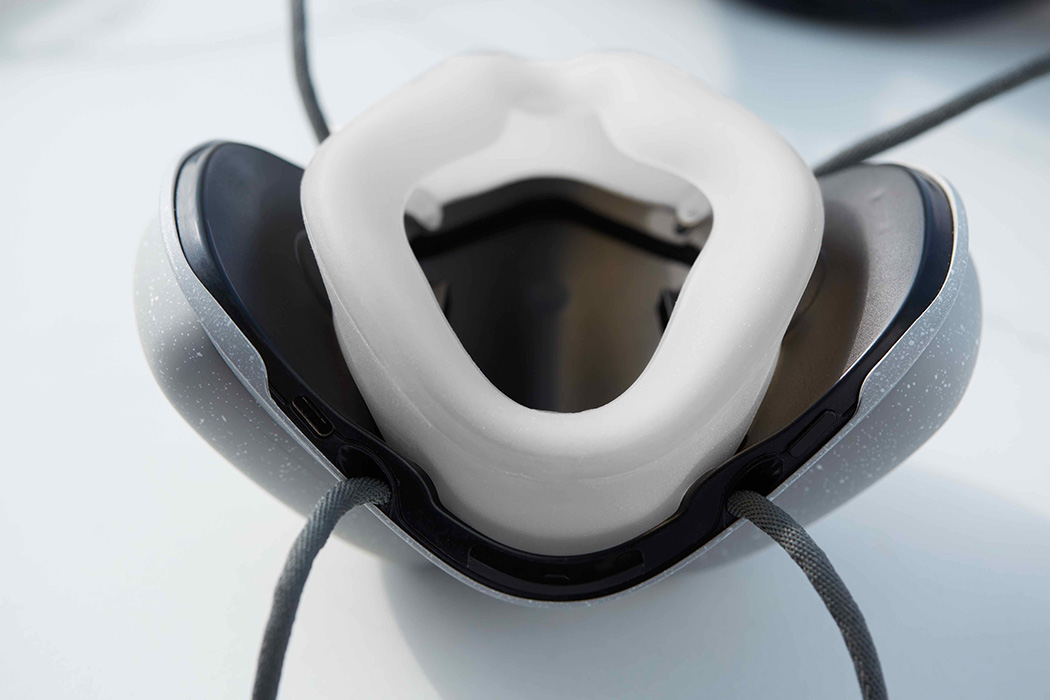 The unique silicone seal was designed with users in mind. Data of over 1000 individuals’ faces was compiled and then the team created a unique solution that adapts to various sized faces. ATMOBLUE’s soft, lightweight silicone seal contours around the user’s face leaving enough room for movement and flexibility. 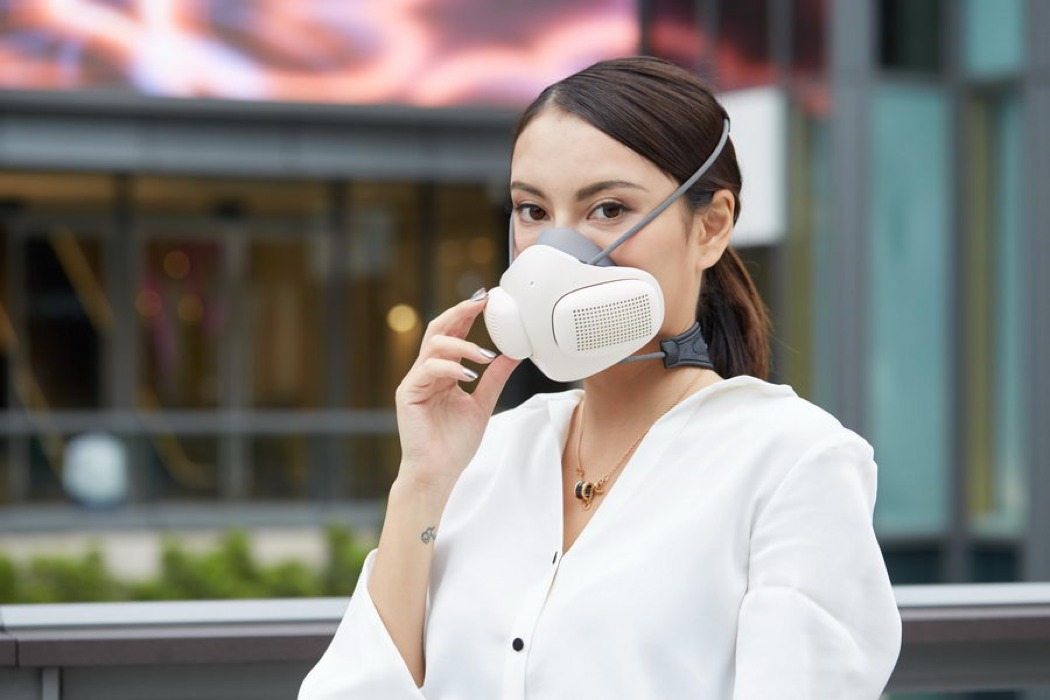 With the unique strap-channel design, the continuous head-strap flows through the mask, around your neck and head, creating a full range of continuous motion.

Designed with athletes in mind they used high-quality, flexible, materials allowing for a stretch when using your mobile device or looking around your periphery. 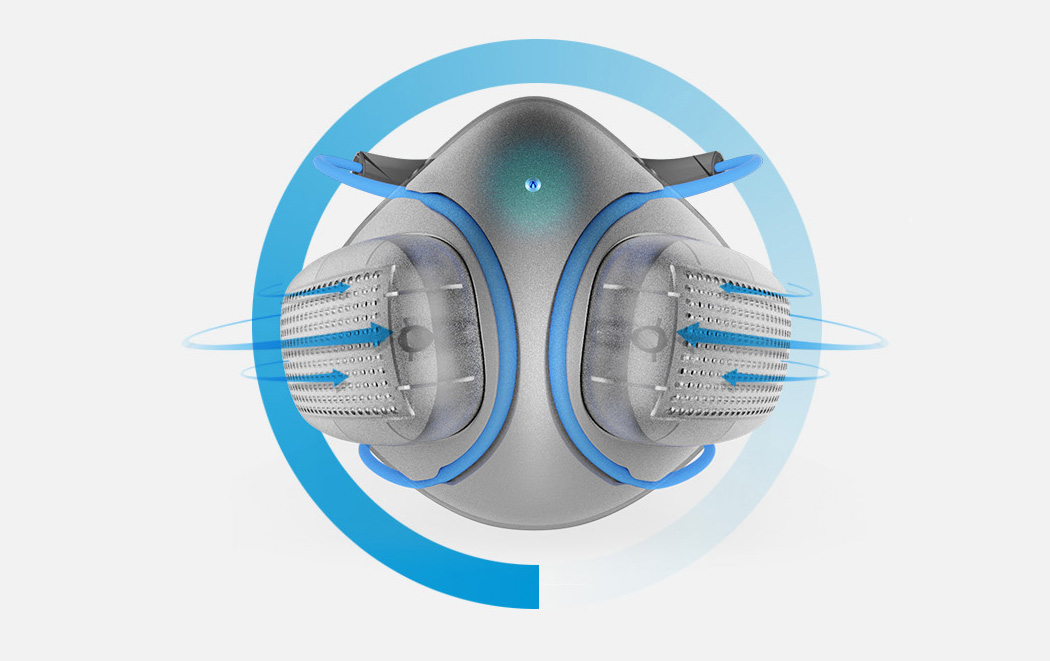 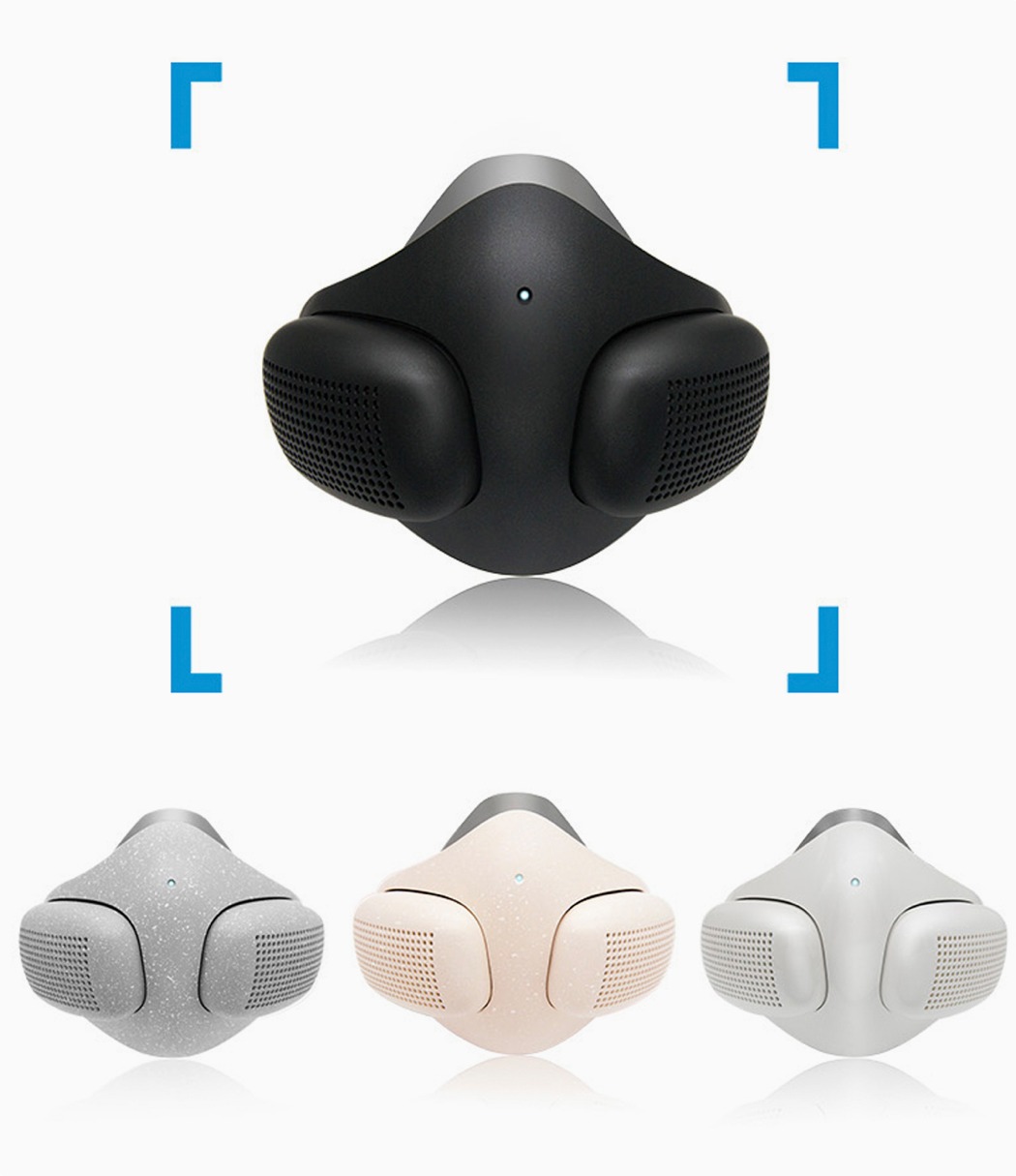 Available in four color configurations: Smoke, Pearl, Cement Grey, and Light Pink. Replaceable covers allow your mask to transform and adapt to your style and environment. Simply remove the magnetic HEPA caps and pop off the front of the mask. Once you’ve chosen one your ideal color skin, simply attach and go.

Designed to be worn around your neck when not in use or in your carrying bag, ATMOBLUE’s compact design features a lightweight design of only 190 grams. 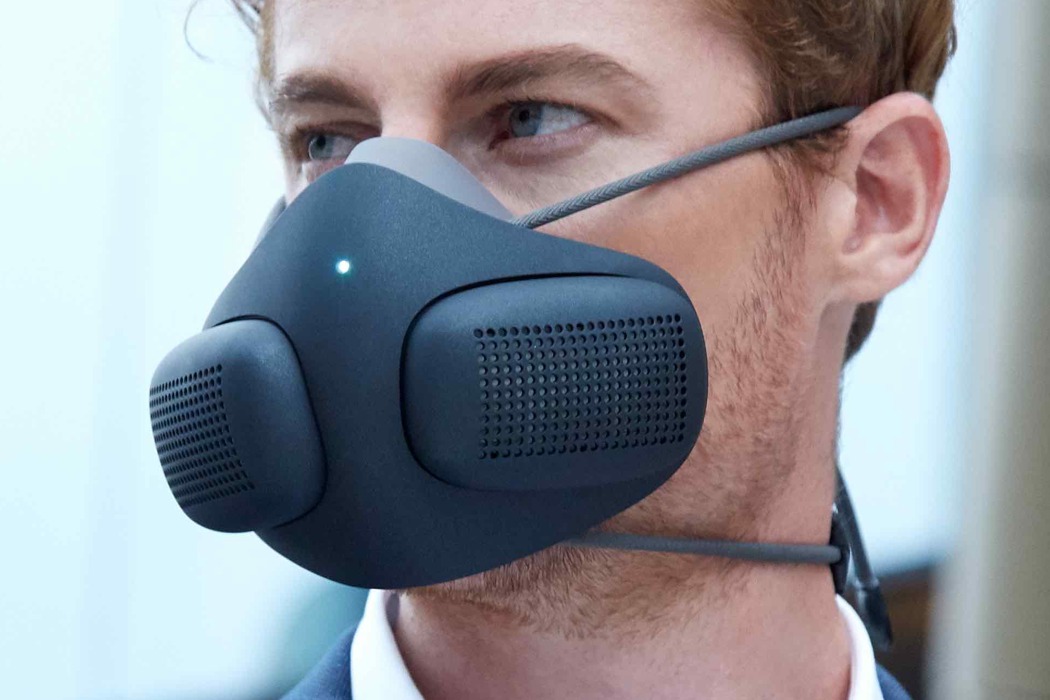 Meet the StoryPod. Part smart-speaker, part plush-toy collection, the StoryPod is all about engaging a child without relying on screens. Designed to be the child’s first…

It’s the perfect setting to bring out the Sorapot, brew some tea, get comfy and interview designers. Easier said than done, establishing yourself in the cut-throat…

To circulate air in the home, the COANDAIR fan uses the same effect that a flying saucer would if they existed! Called the Coanda effect, the…

Alicia Keys once said, “If I want to be alone, some place I can write, I can read, I can pray, I can cry, I can…