Three years after developing the Altered:Nozzle and after saving over a billion liters of water in that time, the guys at Altered are back with a shower-head that uses an advanced form the very nozzle that they developed for faucets years ago.

The Altered:Shower focuses on nailing down three aspects that make a ‘good shower’ – coverage, temperature, and pressure. The shower’s state-of-the-art nozzle allows lesser water to pass through, but focuses the stream into a dome, turning small drops into bigger ones that reach further. Touted as Altered:Shower’s Dome Technology, the nozzle has a flow-rate of 3.8 liters per minute, which is significantly lesser than most showers that average out at anywhere between 10-15 liters per minute. The specialized nozzle within the Altered:Shower has a way of dispersing water in a manner that mimics a high-pressure shower-head while doing a better job of retaining water temperature too. It atomizes the stream to disperse it efficiently, but with significantly larger drops that would travel in one direction, and wouldn’t lose any temperature along the way. While providing an experience that the people at Altered say is indistinguishably good, the Altered:Shower saves over 28 thousand liters of water per house per year. In the US and EU alone, that would translate to saving 18 billion liters of water a year, as well as 147 million tonnes of CO2 (saved from having to heat all that water). It’s pretty remarkable that all that is just thanks to a well-designed and engineered nozzle!

The Altered:Shower even comes with a Monsoon mode, created by activating a ring of 16 mini nozzles. They work along with the central water outlet, adding to it to give you an even fuller monsoon-style experience. This does push the shower’s output to 6.8 liters per minute, but that still means as much as 50% less water than a conventional shower.

Altered’s showerhead comes in a luxurious chrome-plated aluminum casing with a stainless-steel nozzle. With standard 1/2″ threading at the showerhead’s base, it retrofits onto any water outlet, while its cylindrical design allows it to be used as a wall-mounted shower as well as a hand-held one. The only interface on the shower is a single switch on its cylindrical body, which allows you to actively toggle between the Dome mode and the Monsoon mode.

Three years in development, and with partners and clients that include Unilever, Emirates, and Shell, Altered hopes to roll out their water-saving showerhead by 2020 in the hopes that it can add to the billions of liters it’s saved with its first product, the Altered:Nozzle faucet. The Altered:Shower in a single household saves an estimate of 28168 liters each year, along with 1407kWh of electricity, 492 kilograms of CO2, and a neat $436 in savings each year! That’s not including the fact that you can enjoy a long, hot, relaxing shower, completely guilt-free. 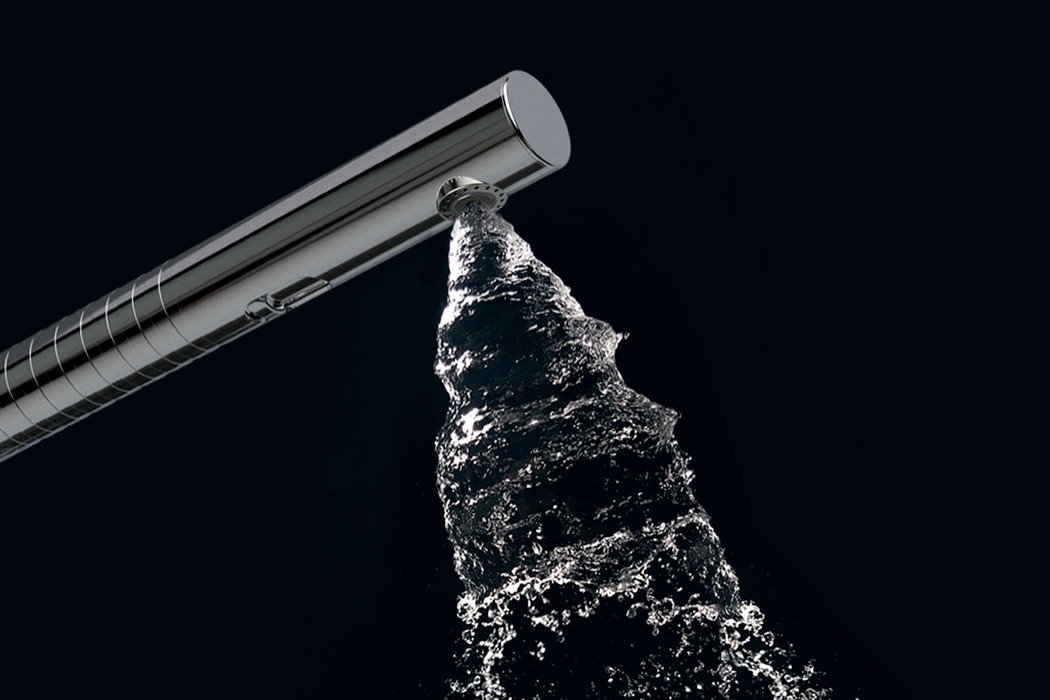 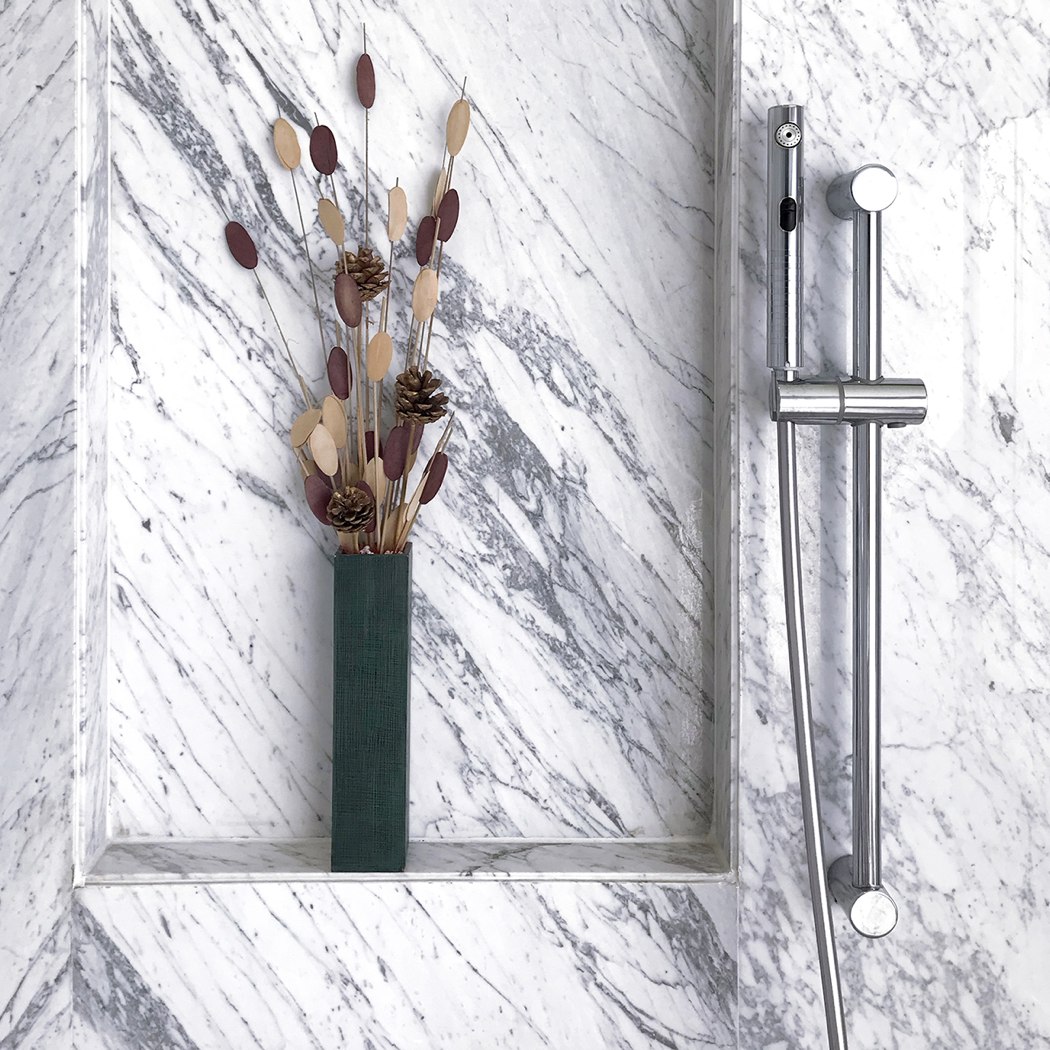 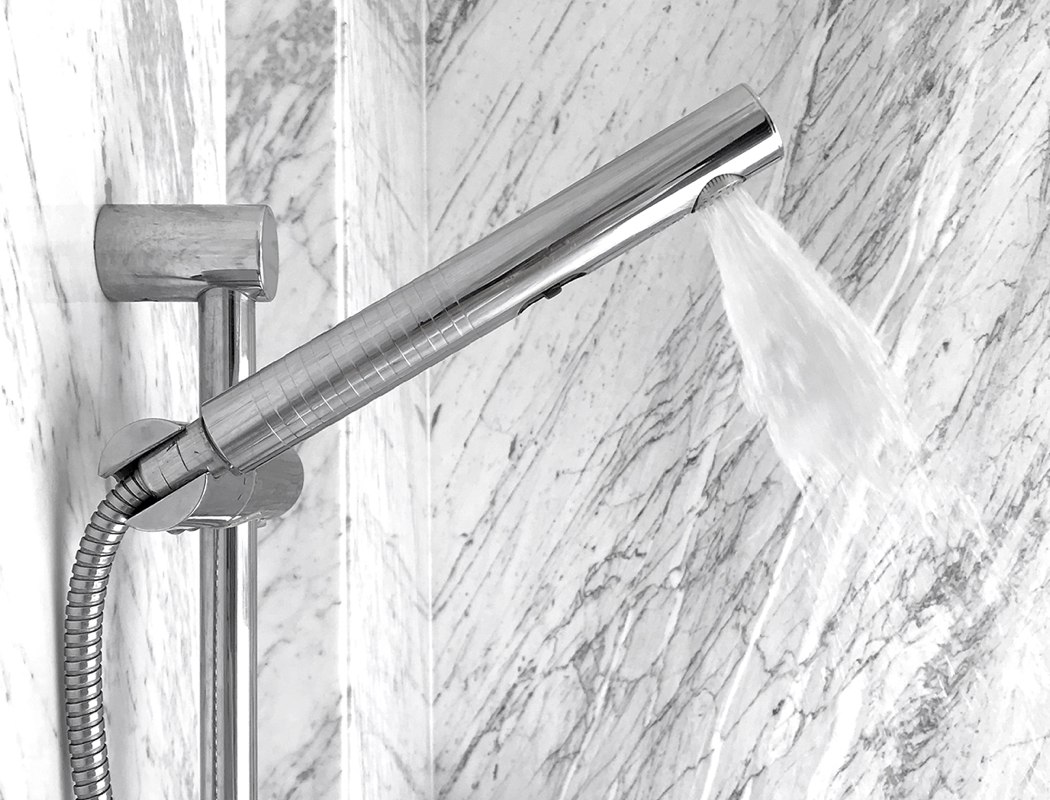 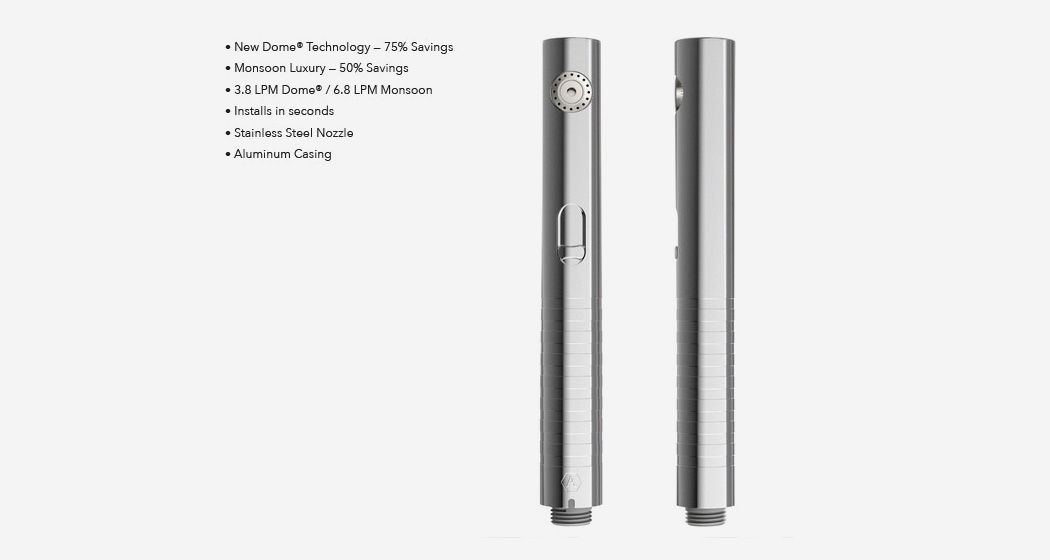 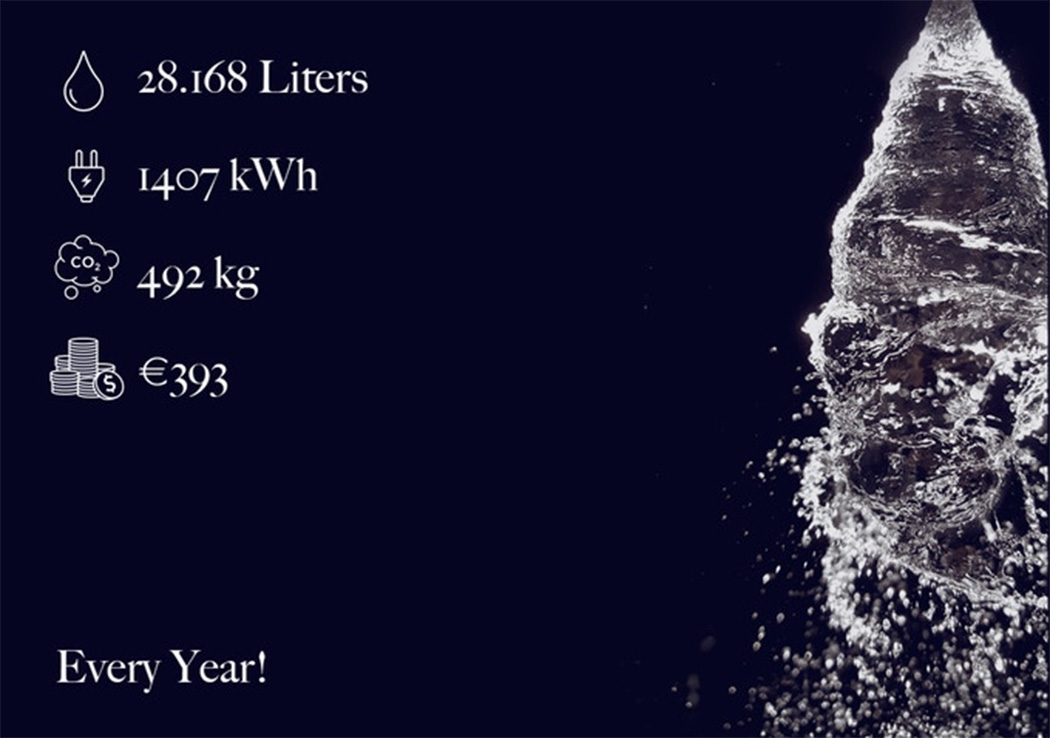 Savings calculated on a household consumption of 420 Liters/day, of which 25% is in showers.

How Does it Work? 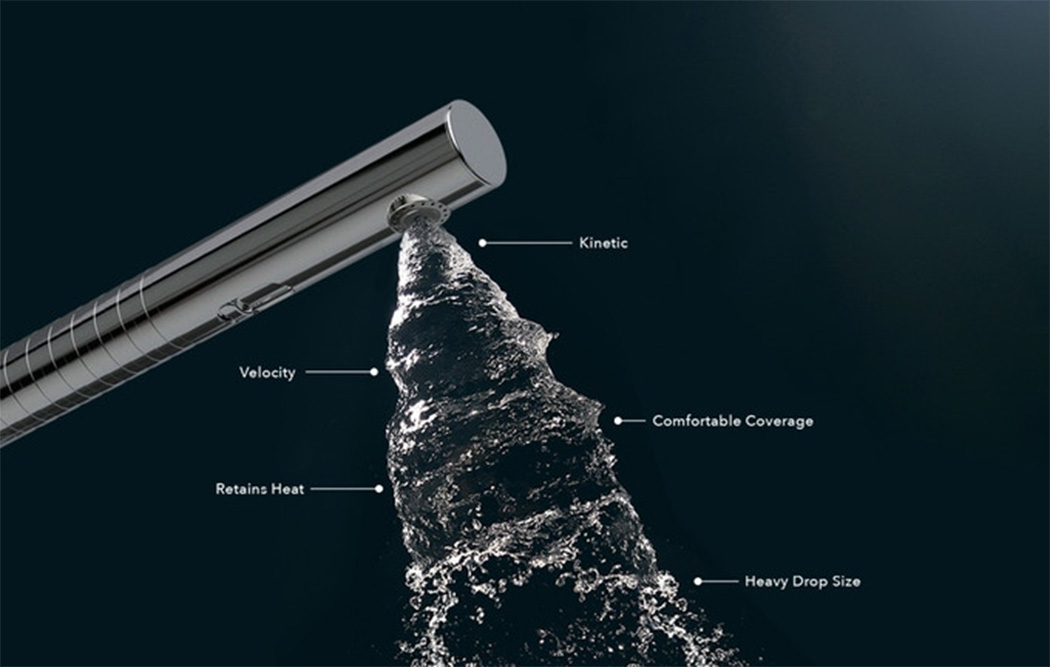 The Altered:Shower has set out to create a sustainable, beautiful and affordable showering experience. To achieve this the team has developed a completely new shower technology: The Dome.

With the Dome Technology the water comes out in a high speed rotating dome shape. The rotation in the dome tears the water apart. Creating thousands of large droplets in high speed. Giving you the coverage and pressure you want. It also transfers heat very effectively. So you can have a nice hot shower without touching the thermostat.

To show the rotation in the Dome, the team has used a stroboscope when filming it in action. The water rotates and is then torn apart into large droplets with high speed.

This allows the team to use the water more efficiently and make it possible to use 75% less water, without loosing functionality.

What Makes a Shower Great

A great shower boils down to three things: Coverage, Pressure and Heat. The Dome technology achieves this as effectively as possible, using as little water and energy as we can.

Coverage — The rotation in the dome results in the water being torn apart, creating thousands of large droplets with high mass. This means you get really wet. It also spreads the water in a random pattern, giving you full coverage.

Heat — Droplets cool more rapidly than a stream of water. But since the water is connected through the Dome, the heat is transferred very efficiently out to the droplets. Resulting in a nice warm shower without the need to touch your thermostat. 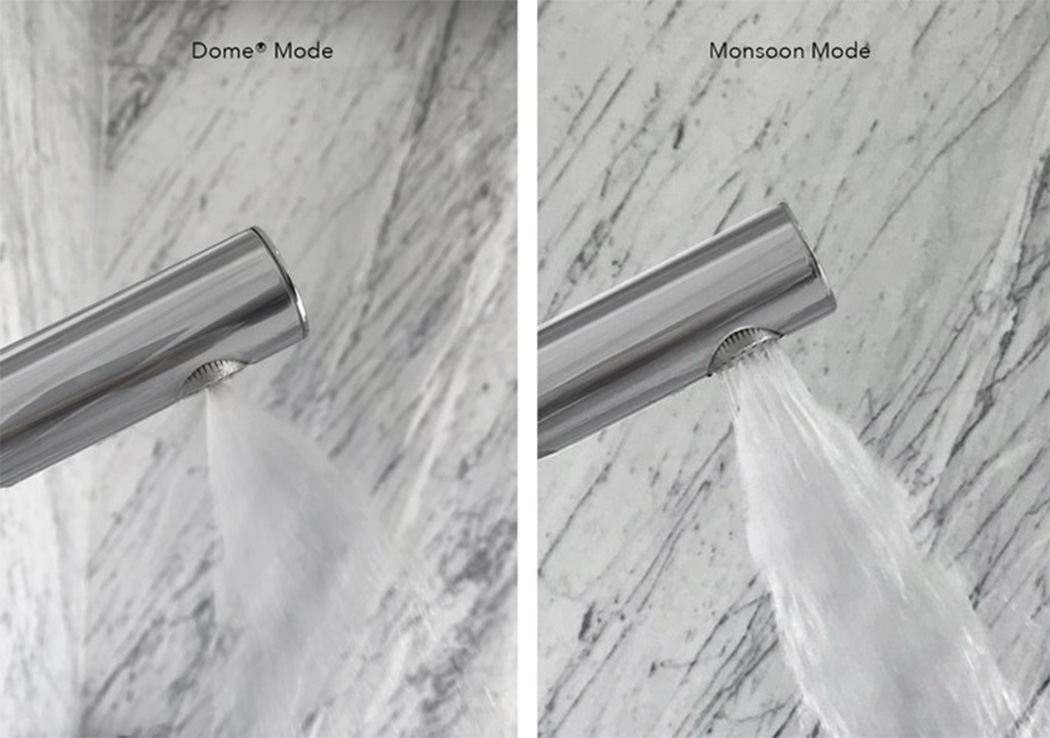 Monsoon Mode – For a luxury experience, and superior rinsing, there is the Monsoon mode. By flicking a switch, you can add water into the dome creating a monsoon rain experience. With the Monsoon mode you get absolutely drenched, but you are still saving 50% of both water and energy. 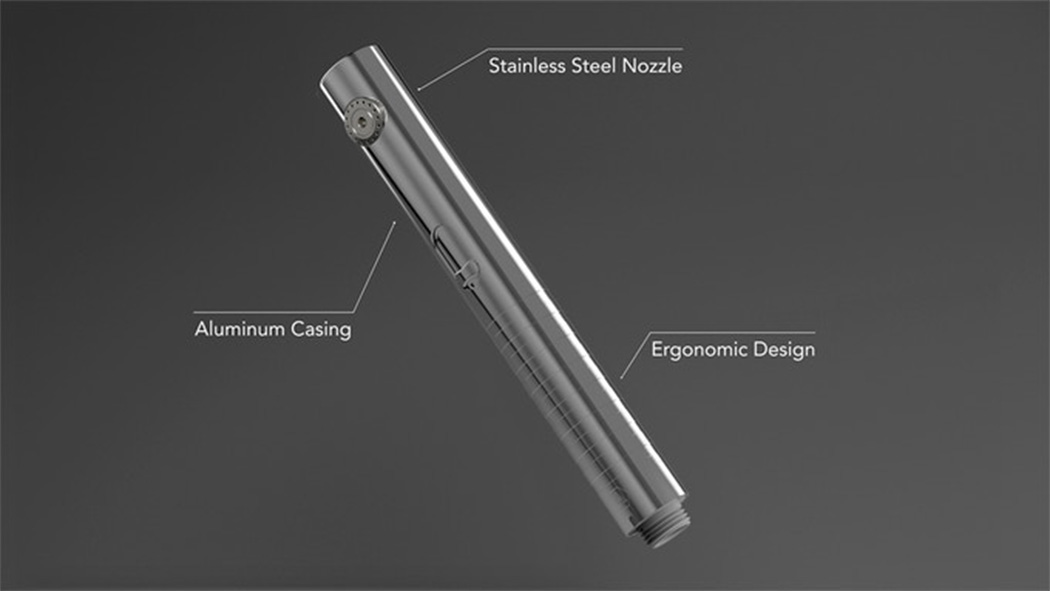 Simple Installation – Simply screw it on your existing shower hose in a matter of seconds, and you are good to go.

With the dome technology they made sure that all of the water exiting the shower is used for cleaning your body, not running down the drain or soaking your bathroom. 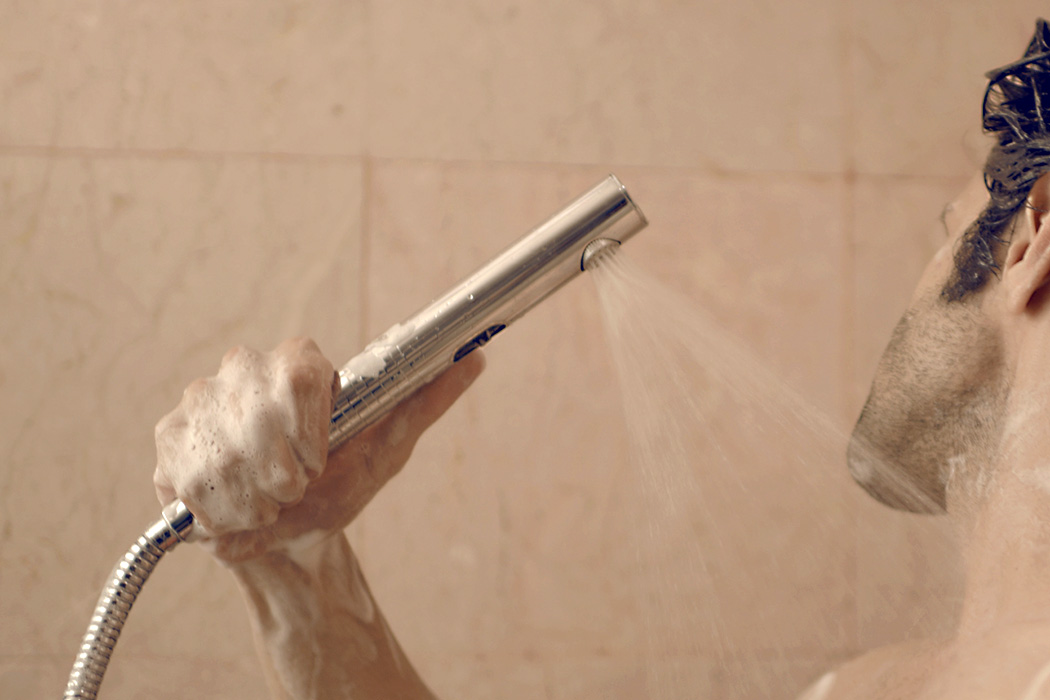 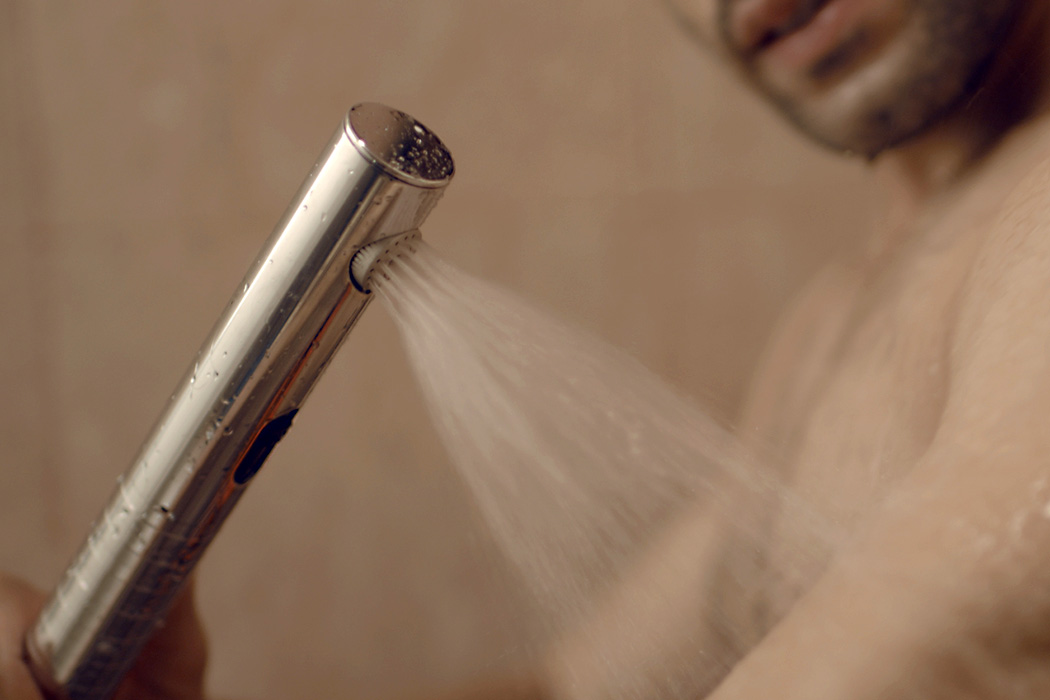 When safety and style meet!

Kitesurfing takes aspects of wakeboarding, windsurfing, paragliding, surfing, etc. and fuses them together to create one incredible extreme sport. So, it’s only appropriate for the…

A tear-off mini-calendar to help you keep resolutions

One of the greatest pleasures of summer is to find a busted fire hydrant and experience the cooling water spray; simply enjoying the moment. With…