Touted as a new generation of foldable e-bikes, and with enough awards to prove just how ground-breaking it is, the FLIT-16 is the good old electrically assisted bicycle in a brand new avatar. Designed to help you ‘flit’ across the city from A to B, the bike comes fitted with a 220W Bafang rear hub motor that boosts your ride for up to 50 kilometers (30 miles) on a single charge. When you’re not riding it, the bike folds down at two separate points to become small enough to store under your table, yet still retaining its ability to be wheeled around wherever you go.

Flit-16’s strongest feature is its seamless blend of design and engineering, brought about by Dave’s technical prowess along with David’s eye for aesthetics and detail. The e-bike surprisingly doesn’t look like one, especially given that the rear-wheel motor is concealed from view, and the Flit’s cylindrical battery was designed to beautifully slide into a hollow space inside the bike’s frame, hiding it from view. The bike has a unique way of also integrating suspension into it that allows the rear wheel to easily absorb any shock brought about by cycling on roads, pavements, or even rocky, gravel-y paths. Engineered to perfection by Dave Henderson, who’s background includes being an engineer at Jaguar Land Rover, the Flit-16 maximizes rigidity within a minimal design that further reduces down thanks to its three main hinges that allow you fold or unfold your e-bike in just 10 seconds. When folded, the bike can be wheeled around like a shopping cart, allowing you to navigate through buildings and in public spaces without lugging a folded bicycle around. When unfolded, the Flit-16 presents a radical way to explore your city, absorbing everything the urban and suburban scenery has to offer without absorbing any of the bumps on the way, if you know what I mean! The bike even comes with an integrated headlamp and taillamp that allows you to drive safely after sundown.

A winner of multiple design and transportation awards, the Flit-16 truly sets a benchmark for not just e-bikes but personal transportation in general. It manages to tick all the boxes, being portable, easy to use, sleek, sturdy, practical, and a price-tag that makes the folding bike cheaper than a folding smartphone! 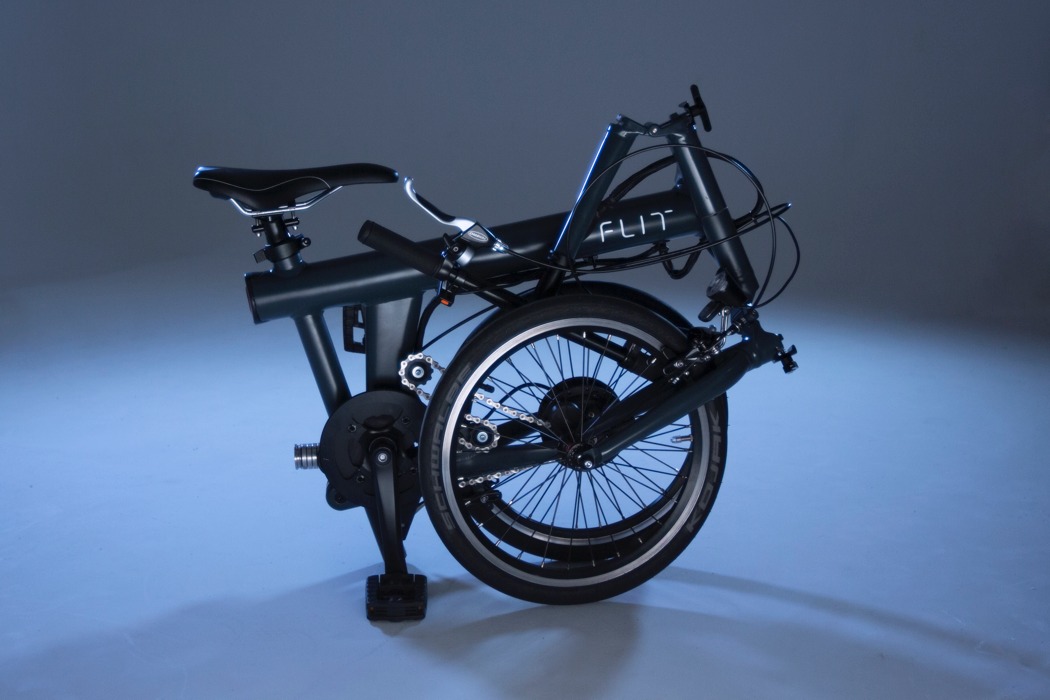 Designed in Cambridge, UK, by ex-Jaguar Landrover engineer Dave Henderson, the FLIT-16 is an ebike that’s incredible to ride, fast to fold and light to carry. Perfect for the modern city commuter. 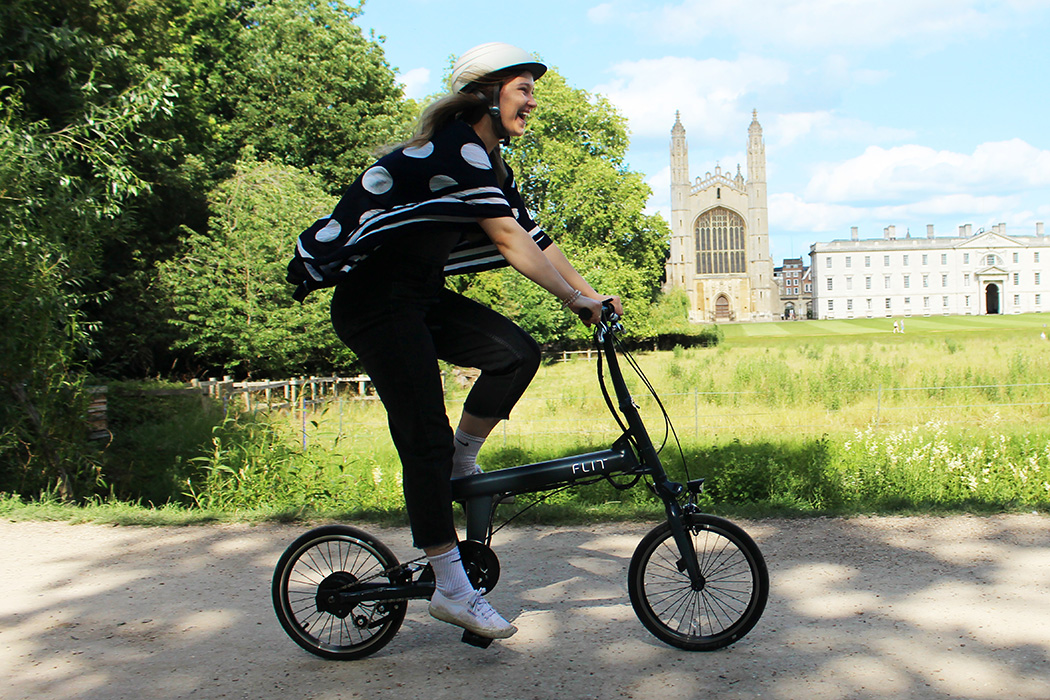 What is the FLIT-16 Bike

Designed to be electric from the start, the FLIT-16 is developed around a custom lithium-ion battery pack that has been built into the frame. This keeps the design beautifully simple, whilst significantly reducing its weight and maximizing the rigidity of the bike. The 250 Wh battery uses the latest generation of LG cells, offering 30 miles (50km) range on a single charge. 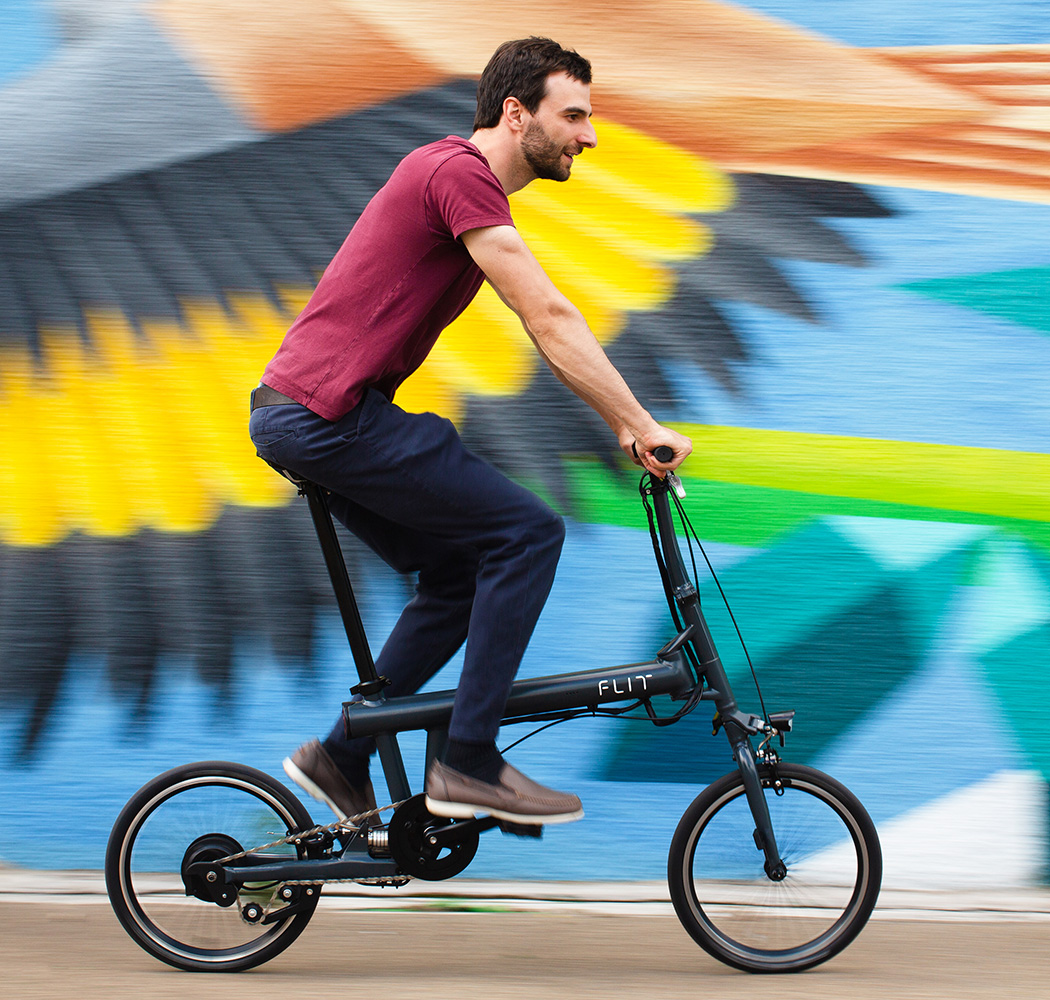 In the rear wheel, a high torque motor provides boosts the rider’s own pedalling effort to give a controlled and responsive ride. Both the rear light, which is built into the rear of the frame, and the fixed front light are switched on via the handlebar display. The rear light also functions as a brake light and offers excellent visibility during night riding. 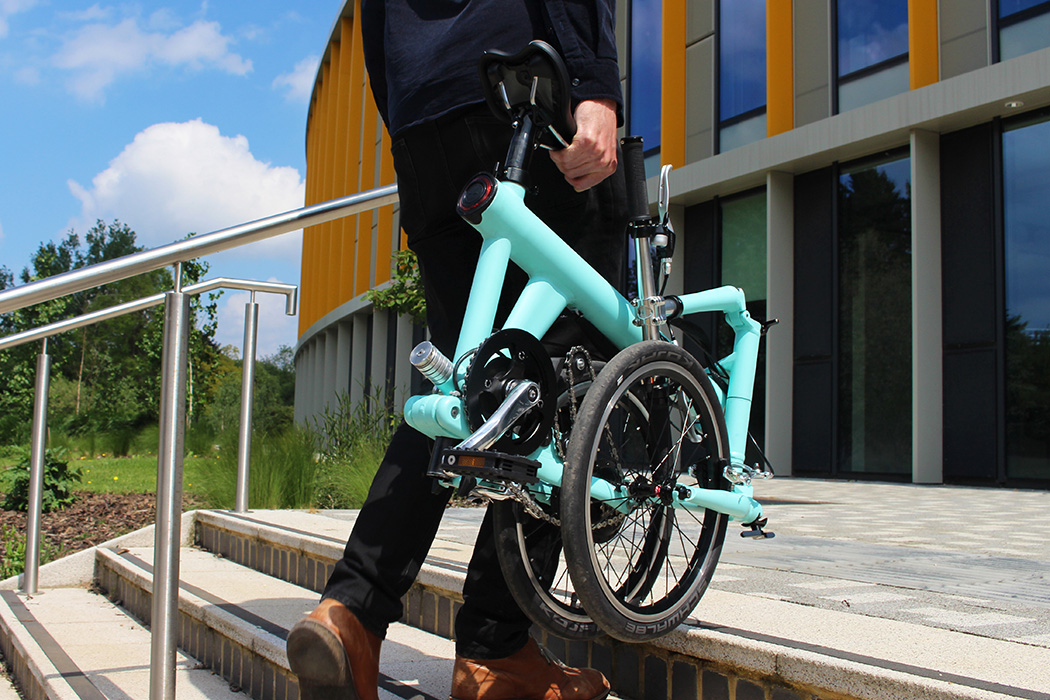 The e-bike weighs just 14kg including the battery, making it lightweight and convenient to carry. A unique folding mechanism means that it can be folded in 10 seconds. 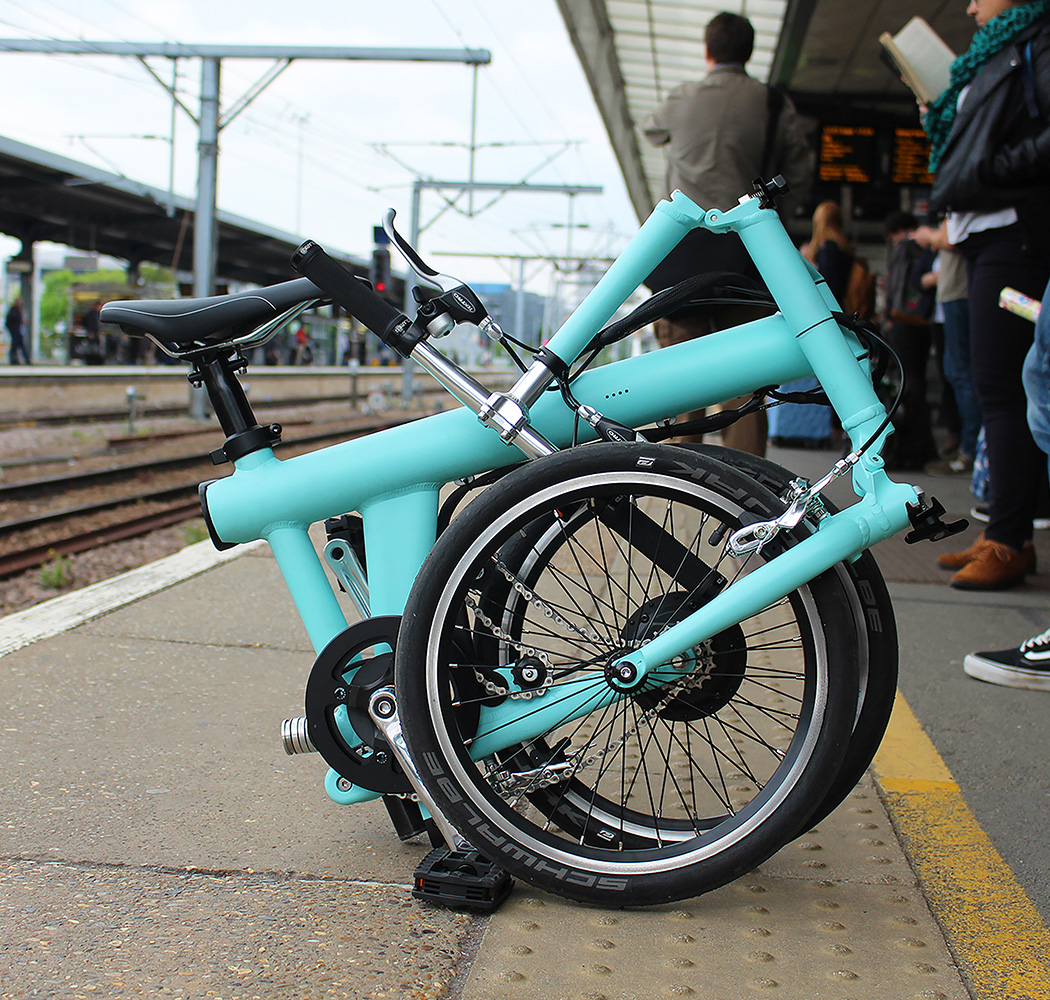 When folded, it can easily be rolled on its rear wheel, to maneuver through crowds or along a station platform. 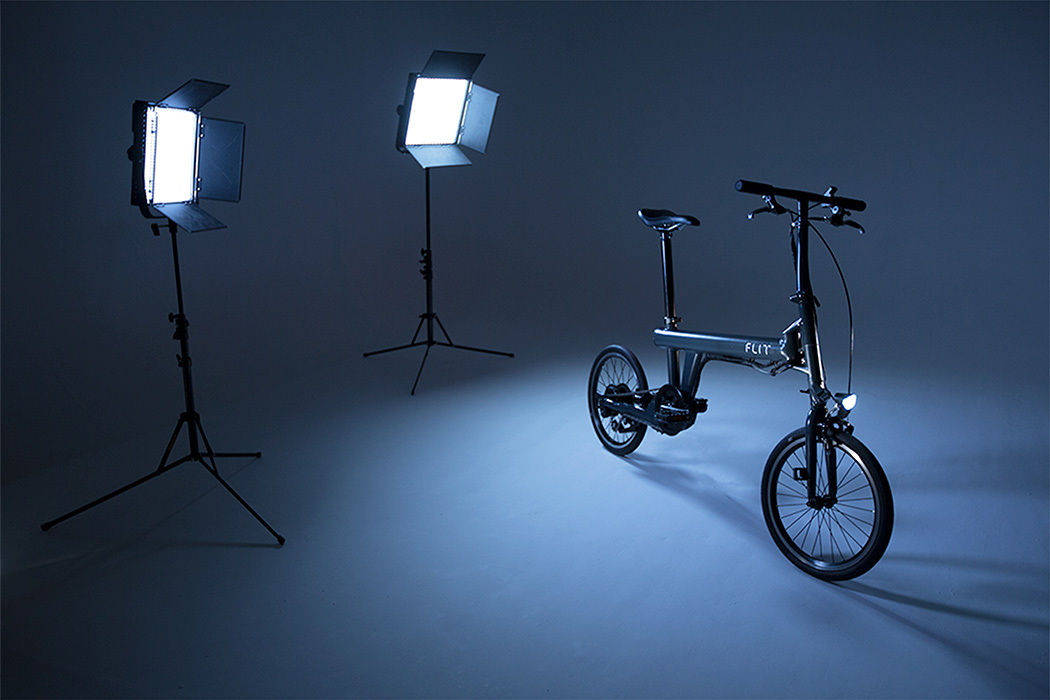 The frame is made from a heat-treated 6000 series aluminum alloy, providing excellent strength to weight ratio and corrosion resistance. For durability, key contact surfaces have been reinforced with stainless steel inserts to minimize wear.

Designed to be Electric

– Travel up to 50km (30 miles) on a single charge, that’s over 3x the average UK cycle commute
– Maximizes the rigidity of the frame for the best ride quality
– Keeps the design clean & cool

Fold your FLIT-16 in just 10 seconds: with 3 simple steps to roll the bike, and a further step to complete the fold. Our unique folding mechanism enhances ride quality: unlike other folding bikes we’ve kept the main frame hinge free to maximize rigidity.

Weighing just 14kg (31 lbs), it’s easy to lift your ebike upstairs, or just stop, fold and roll straight onto the train. We’ve designed the FLIT-16 to roll when folded on its own wheels: maximizing stability and maneuverability. 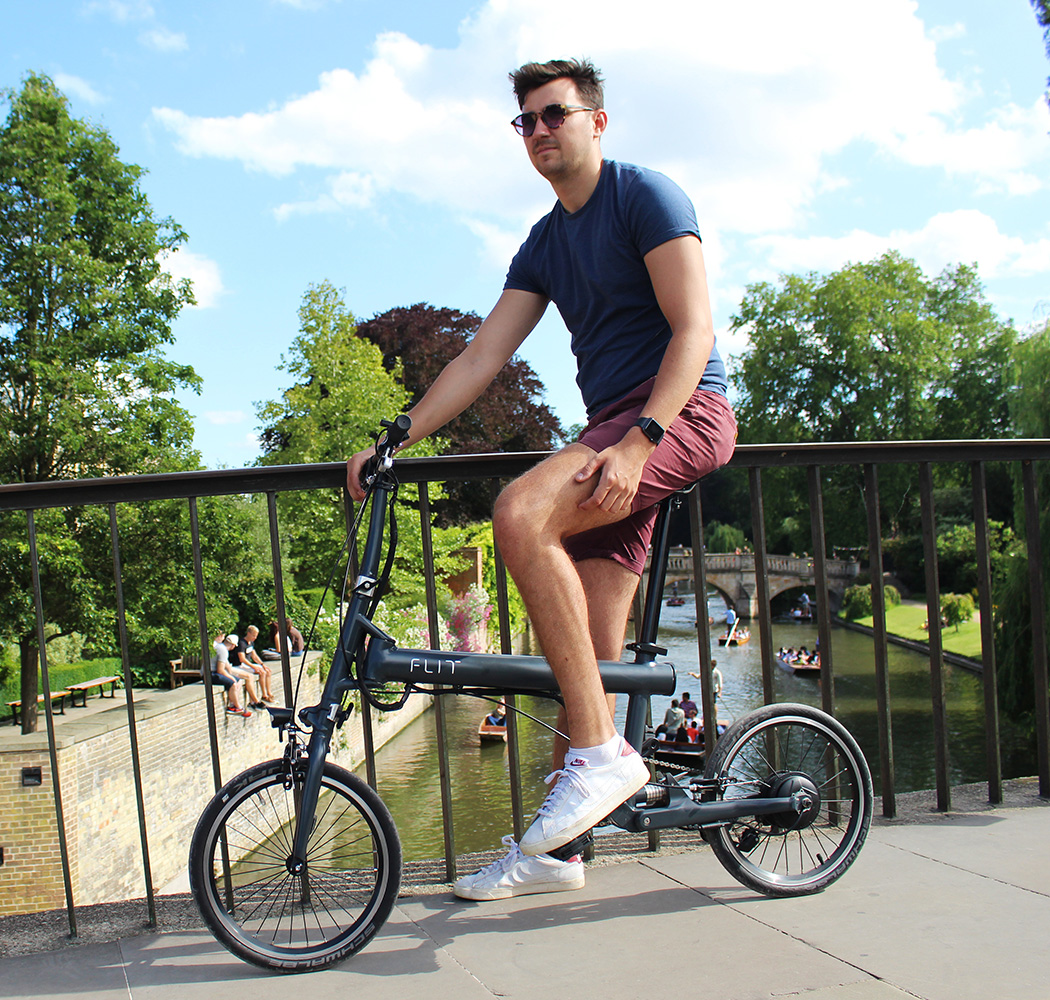 FLIT through the city, traveling up to 50km (30 miles) on a single charge. That will easily take you out of the M25 from Trafalgar Square. Avoid congestion, lose the crowds.

The compact folded size fits neatly into your lifestyle: under your desk, on the train or in the hallway at home. We’ve designed the FLIT-16 so that you can take it with you anywhere!

With integrated front and rear lights, you’ll never be left in the dark!

We’ve developed a custom built suspension system to make sure all of your journeys go smoothly.

You can trust that the corrosion-resistant 6000 series aluminum frame won’t rust. We’ve added steel reinforcements in the hinges so that they’re built to last. 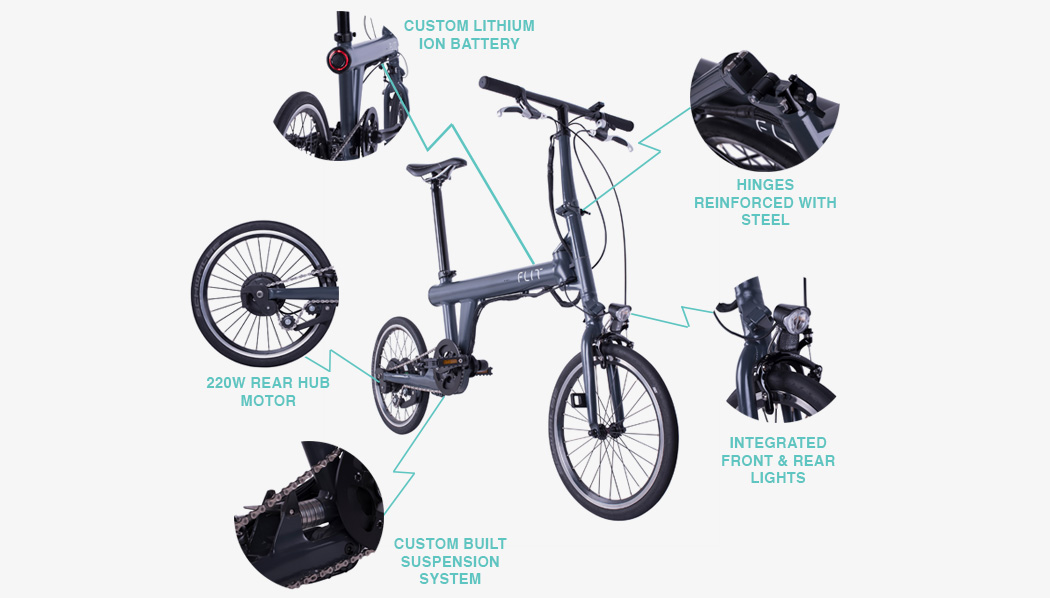 We wanted a riding experience unmatched by other folding bikes. That meant we needed a long wheelbase with plenty of clearance around the rider’s knees and feet. The large circular top tube was designed without a central hinge to maximise frame stiffness in all directions, giving a responsive ride with precise handling. This combination leaves the rider feeling comfortable and in control. 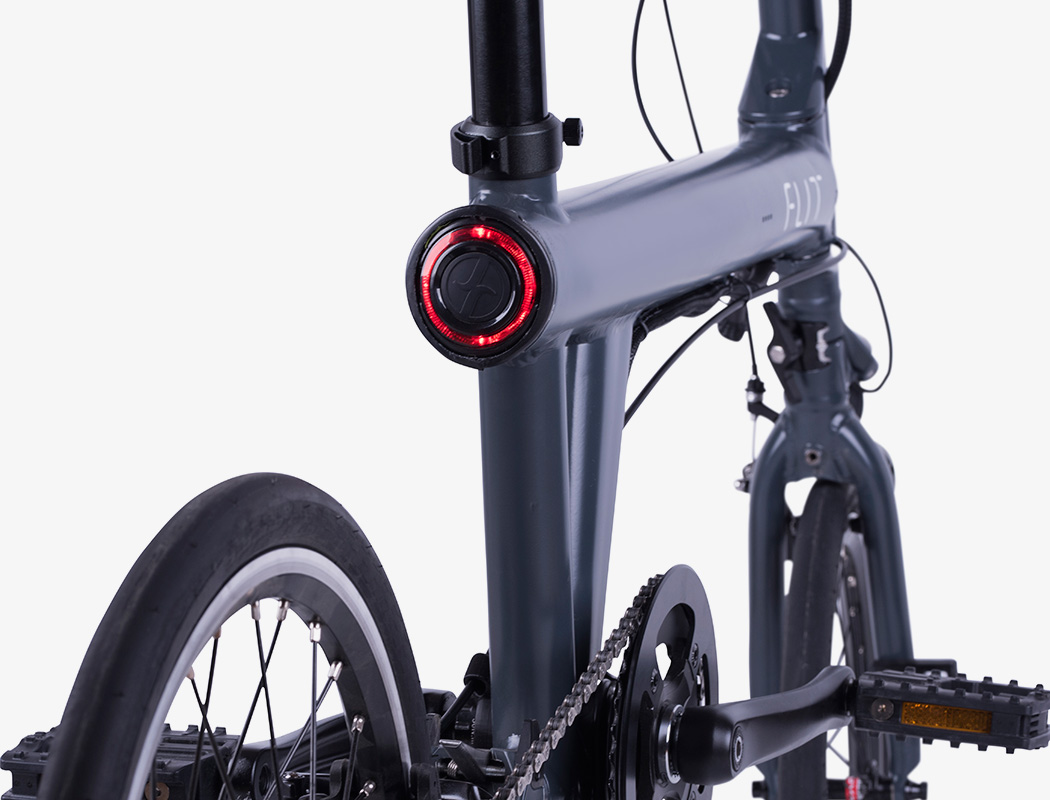 By stealthily building a 1.2kg (2.6lbs) custom lithium ion battery into the frame we’ve reduced the overall weight of the FLIT-16, as unlike other semi-integrated designs there is no need for extra casing. The battery uses the latest generation of LG cells, giving 250Wh capacity. That’s enough power to take you up to 50km (30 miles) on a single charge! 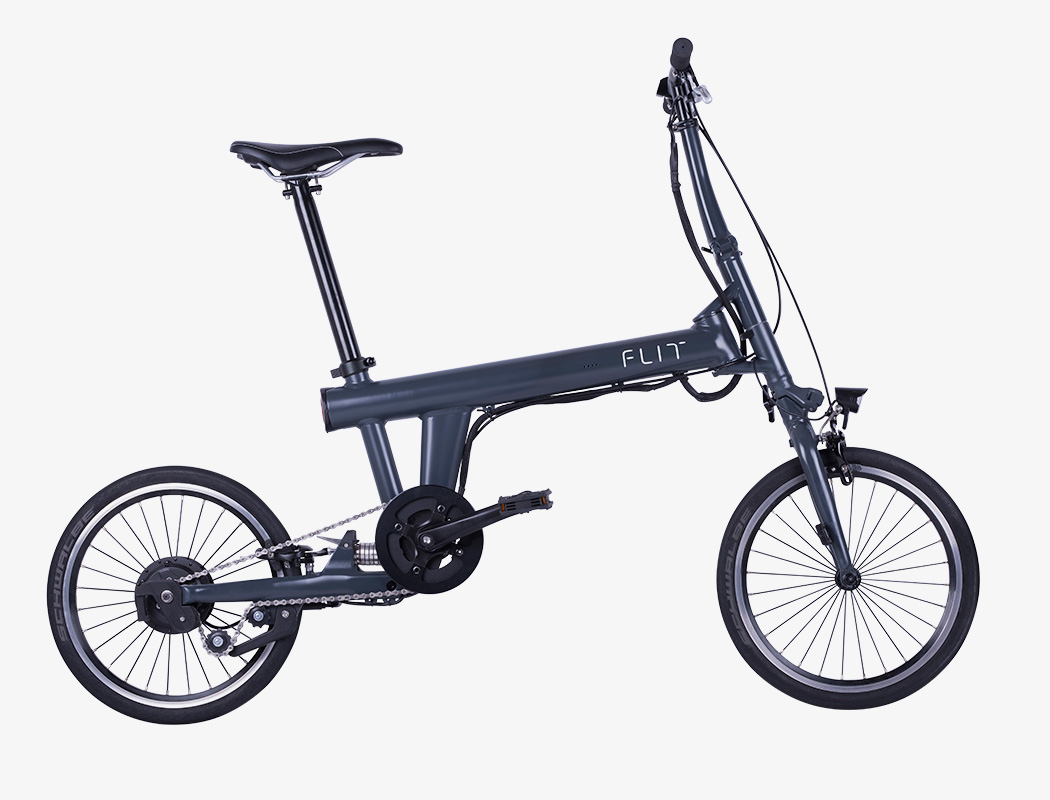 Small wheels were chosen for a lightweight, compact fold and faster acceleration, but with our custom suspension unit, you still get the smooth ride of a larger wheeled bike. The patent pending suspension unit consists of rubber discs sandwiched between hard aluminum discs. The rubber discs convert the movement from the bumpy road surface into heat which is drawn away by the highly conductive aluminum discs. This high performance suspension unit weighs just 120g (4.2 oz) and has a length of just 5 cm (2 ins)! 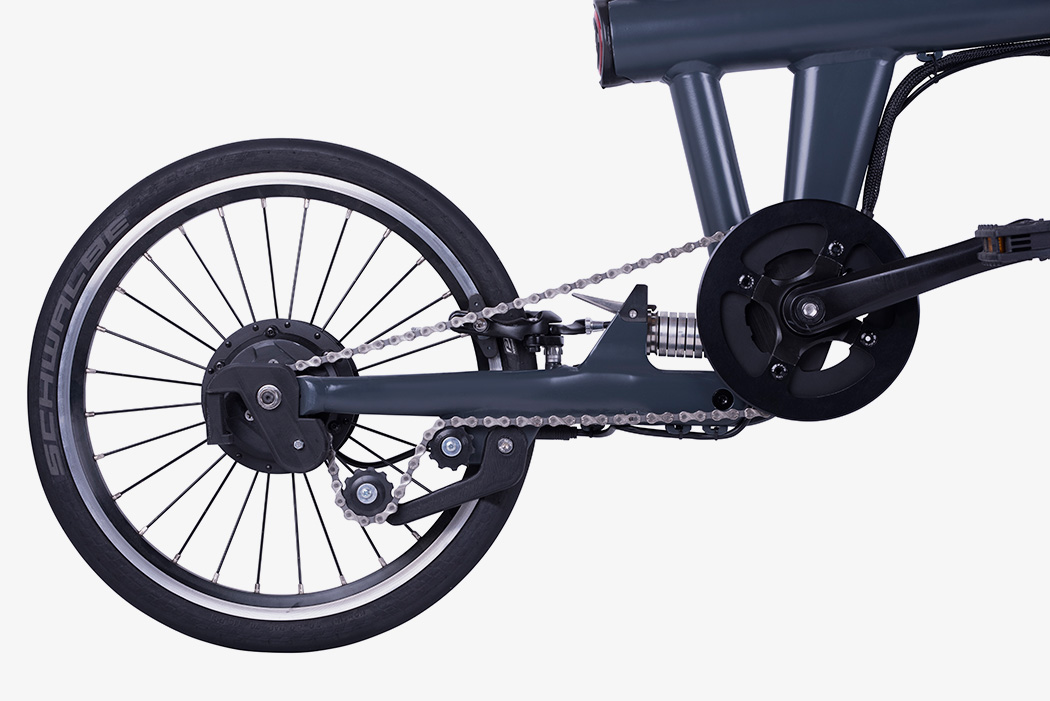 When going up a steep hill most of the rider’s weight is over the rear wheel, meaning that front hub motors can lose grip on the road. Our 220W Bafang rear hub motor never does this, and offers better acceleration than front hub motors as well, even those with a higher power rating. 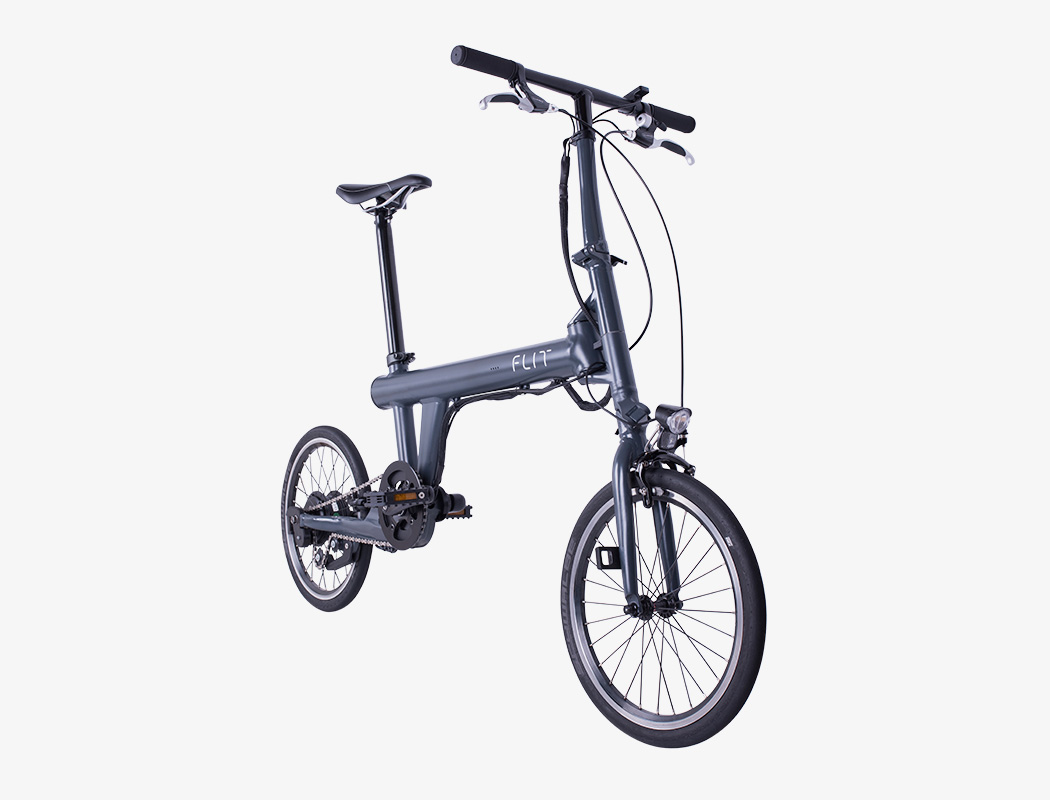 The stylish integrated LED lights are bright and easily turned on or off via the handlebar display. The rear light also functions as a brake light and, being high up on the frame, gives excellent visibility during night time riding. 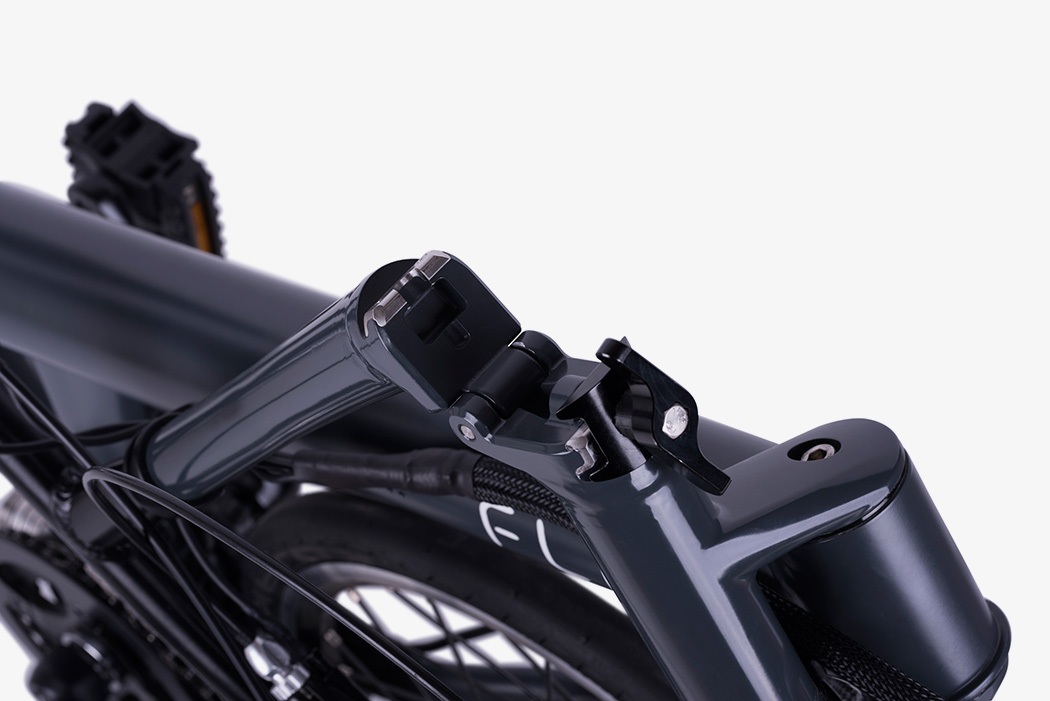 We’ve used heat treated 6000 series aluminum alloy for our frame which gives it an excellent strength to weight ratio and amazing corrosion resistance. But in areas subject to high contact forces like the hinges, we have reinforced key contact surfaces with stainless steel inserts to minimize wear. 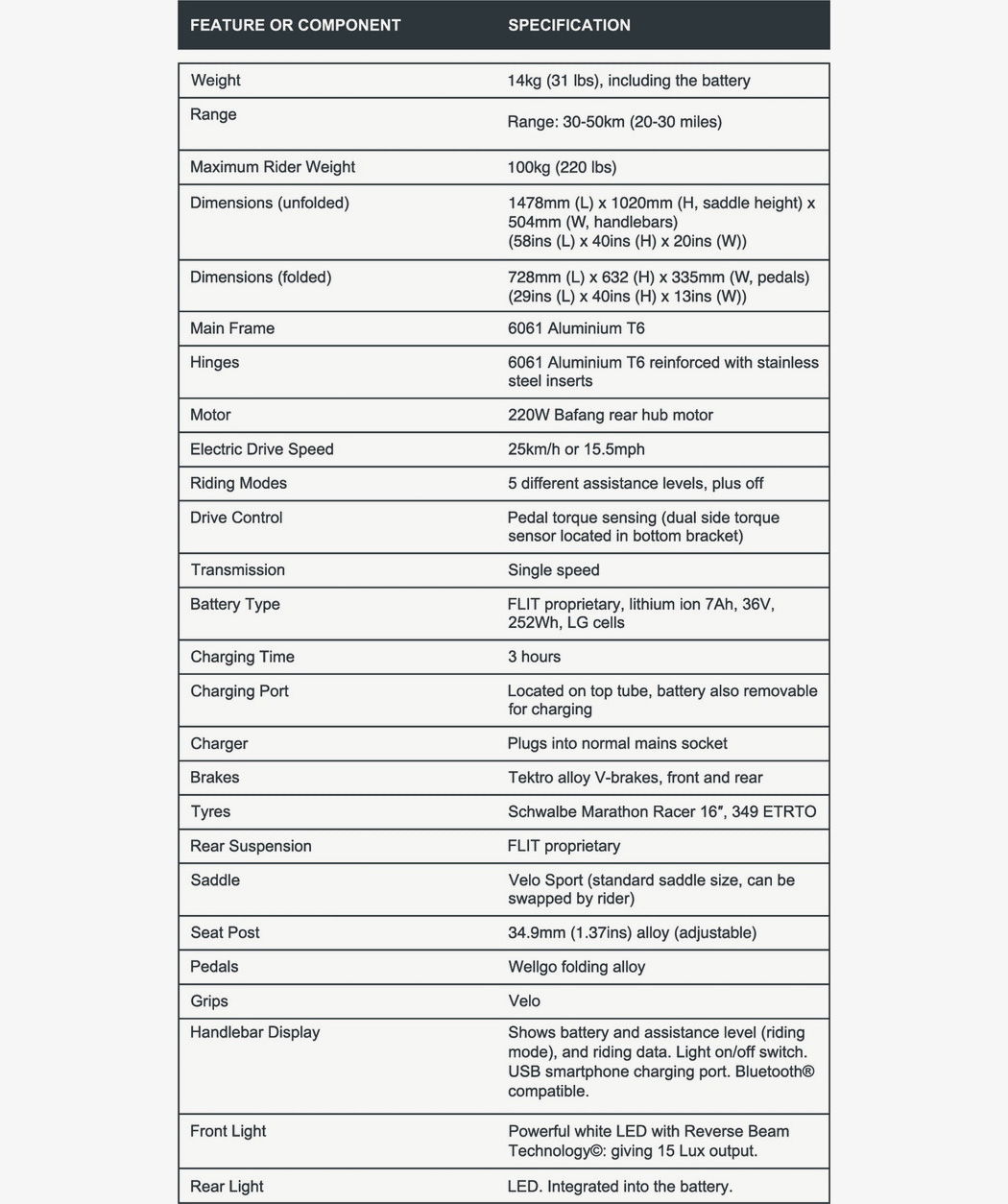 You can choose to have your FLIT-16 in either one of the 3 colors above: 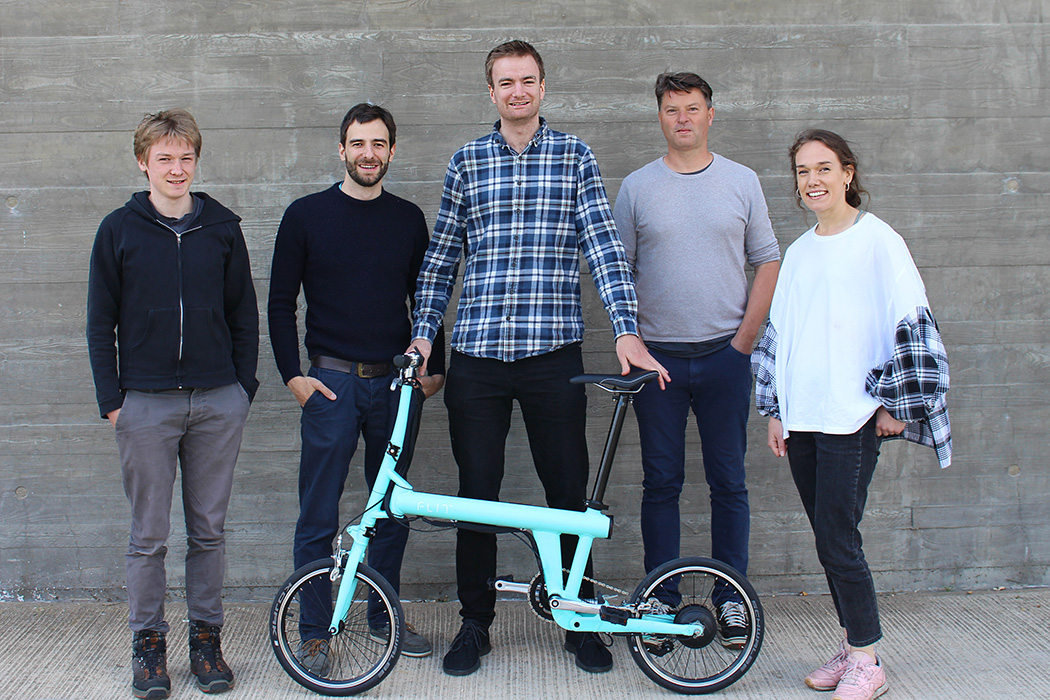 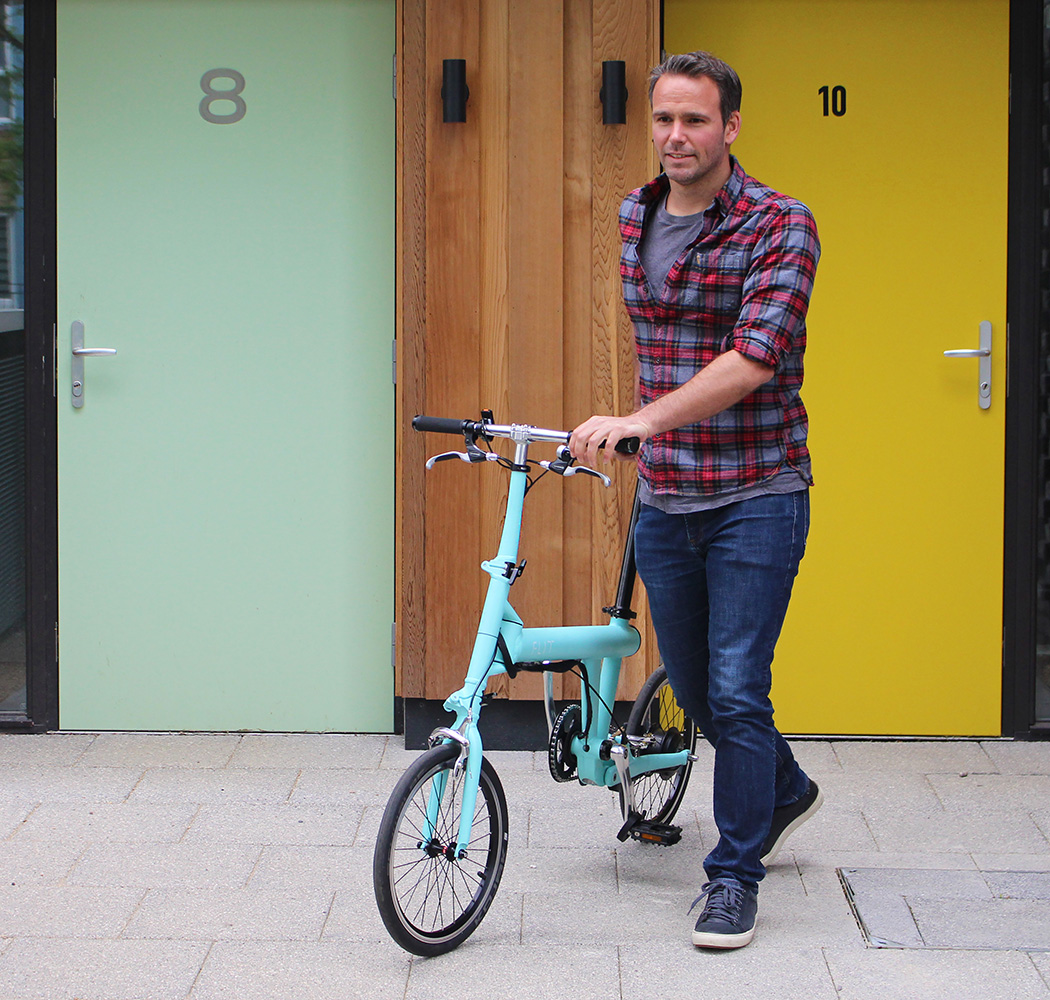 Yes, there’s a high chance it could! Experts estimate that discarded fishing nets make up for a staggering 10% of the plastic pollution in our…

Beat this toy Brad and Angelina! French Luxury Brand Hermés teamed up with Eurocopter to introduce the “L’helicoptre par Hermès”, the most tricked-out, super-stylish way…

Diamond cuts evoke a sense of stillness and luxury so why limit them to stones? The Diamond Lamps by Riccardo Giovanetti brings an air of…

https://www.kickstarter.com/projects/mnmleather/the-highlander-a-damn-near-perfect-travel-backpack With a family history of working with leather since the 1860s, Mitch Bank perhaps knows leather better than anyone. Having seen leather being produced,…