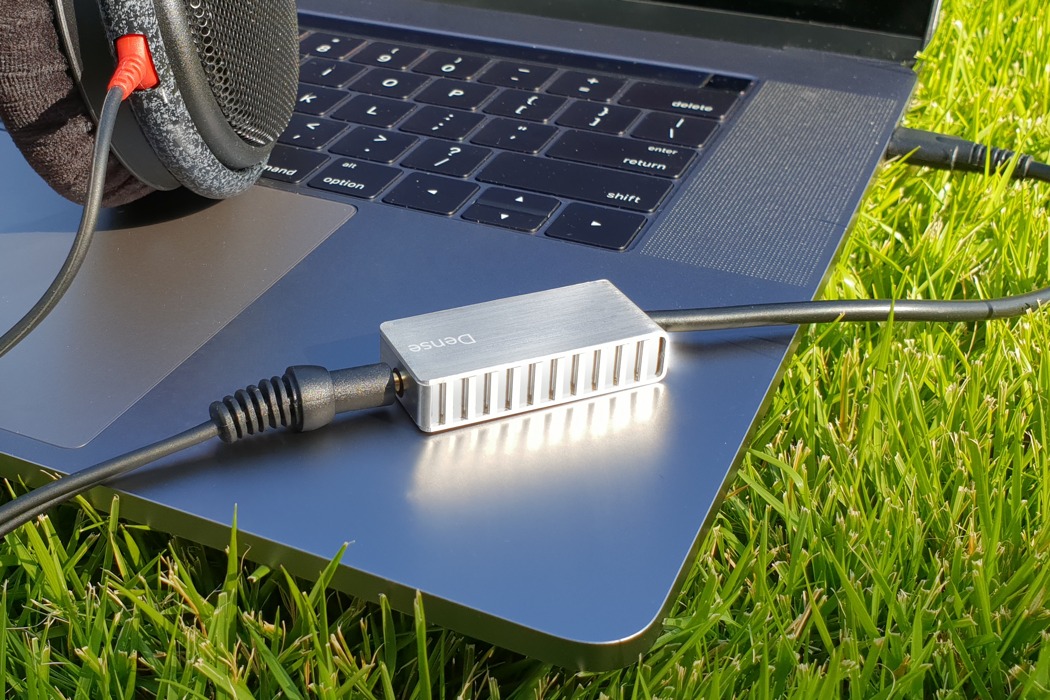 The smartphone you hold in your hand may be an incredibly powerful computer, capable of processing data and images with the adeptness and speed that even computers couldn’t match ten years ago… but there’s an area where it lacks. We’ve been pretty vocal about how smartphones can’t do serious heavy-lifting in the audio department. The music you listen to gets downsampled heavily during playback, giving you audio that sounds decent, but when you’re paying for hi-def audio services like Apple Music, Spotify, or Amazon Music (or if you’re still on Tidal), settling for decent audio means not getting what you paid for. Downsampled tracks often sound recorded, because they lack dynamic range. It’s quite like listening to a recording of a live concert versus listening to a live concert. No matter how good your speakers or headphones are, if you’re playing music through your phone, chances are that your phone is compressing the audio only because it isn’t built with the gear to play tunes in proper high definition.

That’s where DACs come on, or digital to analog converters. DACs quite literally take your digital files and convert them into analog audio signals. They’re quite literally built to do this, and do a FAR better job than your phone does of converting digital files into analog audio signals. Think of your computer having its own graphics card, and you plugging in an external graphics card that lets you play the latest games in stunning resolution. DACs do the same thing with audio, and the result is similar too. Your phone can play back audio at 320kbps (which decent, but your music is always recorded in a much higher lossless format), whereas a good DAC renders the audio file at a higher resolution, allowing you to hear more and hear better.

Most DACs are desktop solutions. Around the size of a hard-drive, they require an external power outlet, and aren’t really meant to be carried around. This format works for desktops, but given that mobiles are the most popular device for music playback, standard DACs fall short, with their clunky, perpetually-plugged design. The Adapt by Dense was designed to adapt to this relatively new (new for DACs) scenario of music playback. The size of a thumb-drive, this extremely portable DAC packs an absolute punch, giving you as much as 76 times the clarity your smartphone gives you. Just plug it into your phone and connect your headphones to it and the difference in quality becomes evident. You hear instruments and backing vocals you didn’t even know existed. Or if you’re using it to watch a movie or play a game, you can now hear even the faintest rustle of grass… audio that was previously lost in the downsampling.

The Adapt comes in two variants. A Standard variant and a more professional Reference variant. As small as your thumb, both the variants come with a sleek body, an anodized aluminum construction, and compatibility with Android, iOS, macOS, and even Windows. Requiring no external power source, the Adapt generates as much as 2V of power (three times more than your phone is capable of), and is capable of playing audio at a stunning resolution of 24.576mbps, making it quite literally feel like you’re in the recording room with your favorite artists. The revolutionary, incredibly small DAC comes ready to use out of the box, with a simple input and output and no unnecessary controls or buttons. Just plug it in and it transforms your audio.

Designed to work with your offline audio files as well as your online streaming profiles, the Adapt gives you your money’s worth with your music subscriptions, letting you listen to your favorite tracks just the way your favorite artists intended. With its ability to play back audio at much larger sample rates, and with a much higher resolution, it’s the equivalent of making a transition from 720p to 4K… and with its 3.5mm input, the Adapt works as a rather efficient, high definition dongle too! 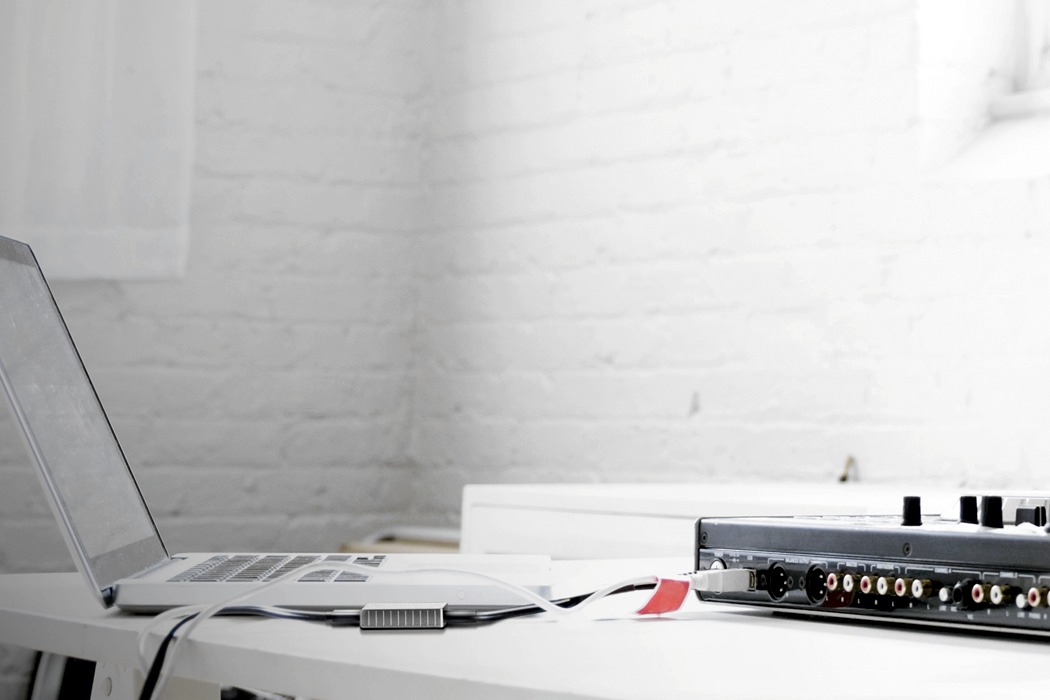 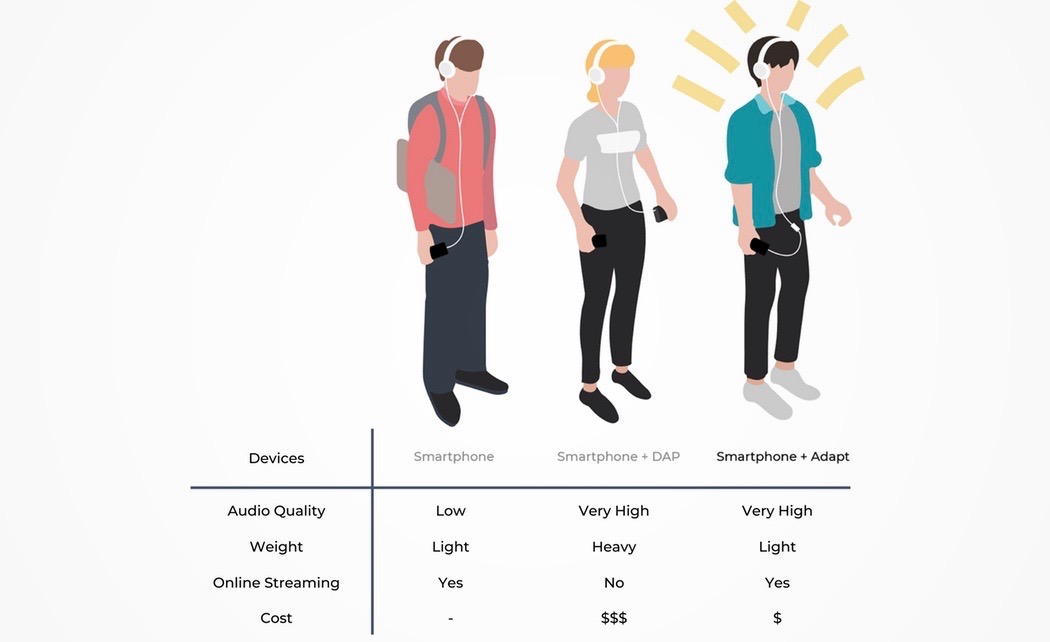 With Adapt, you don’t have to listen to a low in quality and volume music or carry another expensive bulky Digital Audio Player (DAP).
Just a single Adapt completely upgrades your audio effortlessly. 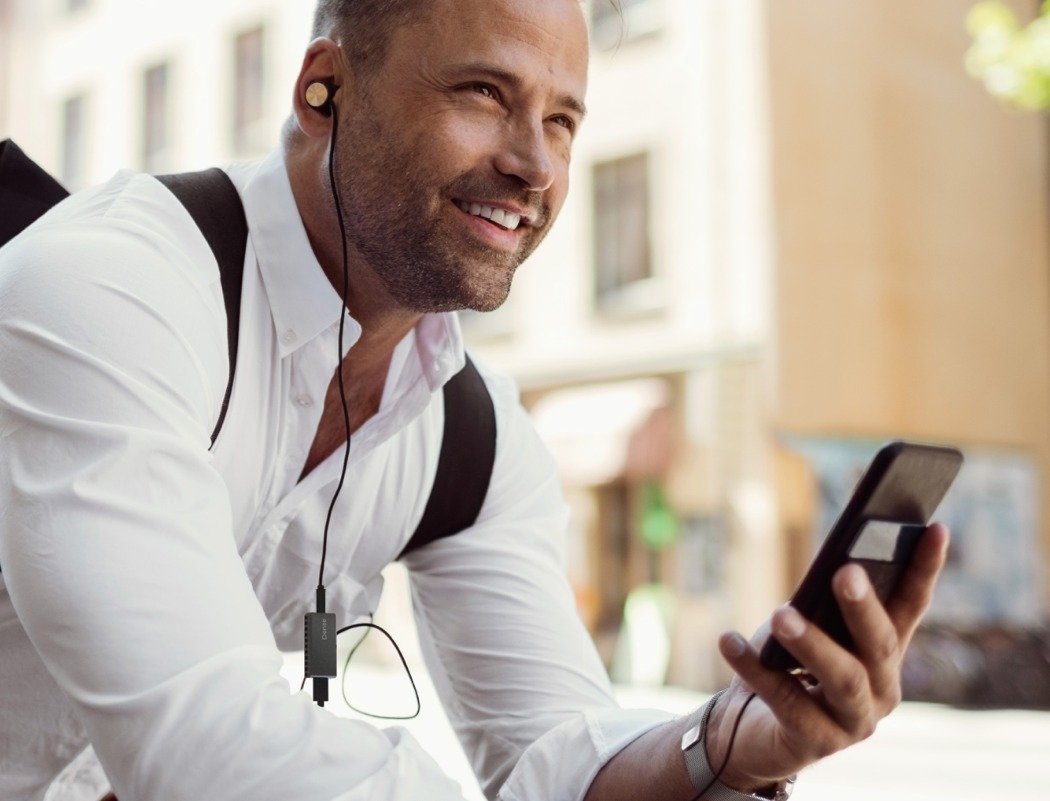 Adapt uses the latest ESS 32bit SABRE HiFi DAC with the Triple Filtered Power Supply for the most stable yet dynamic audio experience. 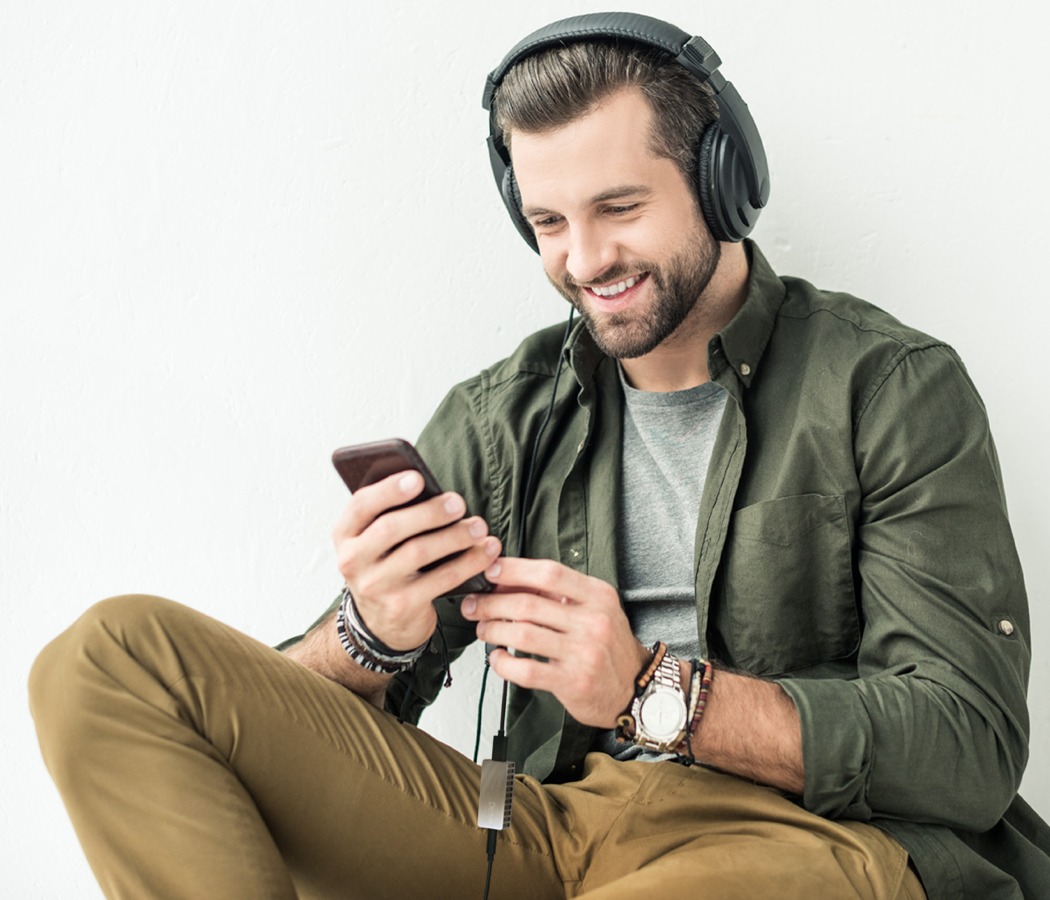 – For MUSIC LOVERS: Have a seat in the middle of a small classic jazz bar at late-night or in a large orchestra hall waiting for the orchestra to finish their tuning.
– For GAMERS: Catch the slightest noise your enemy makes in the wide open grass field. 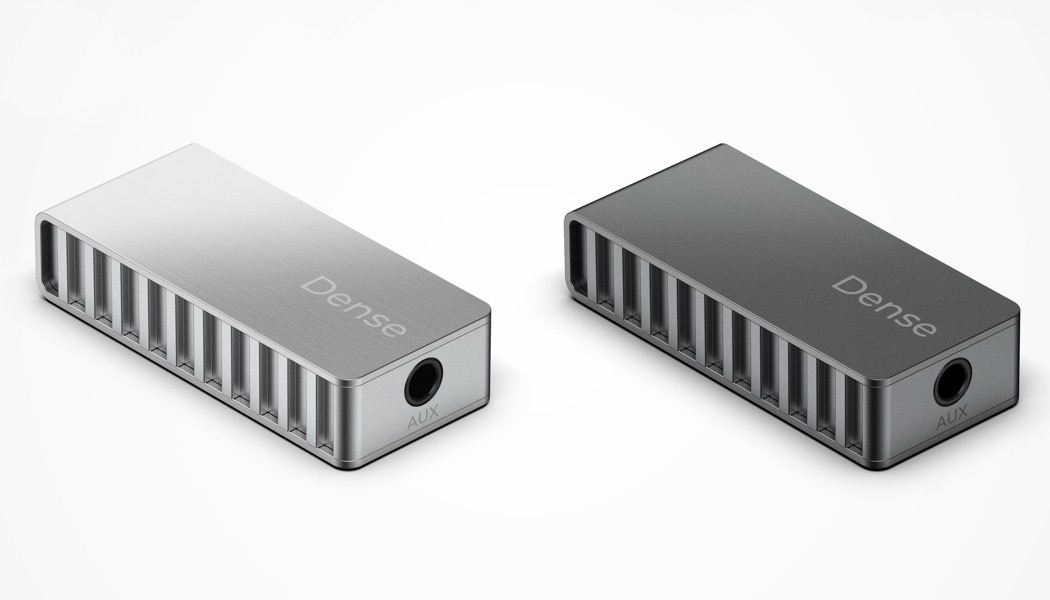 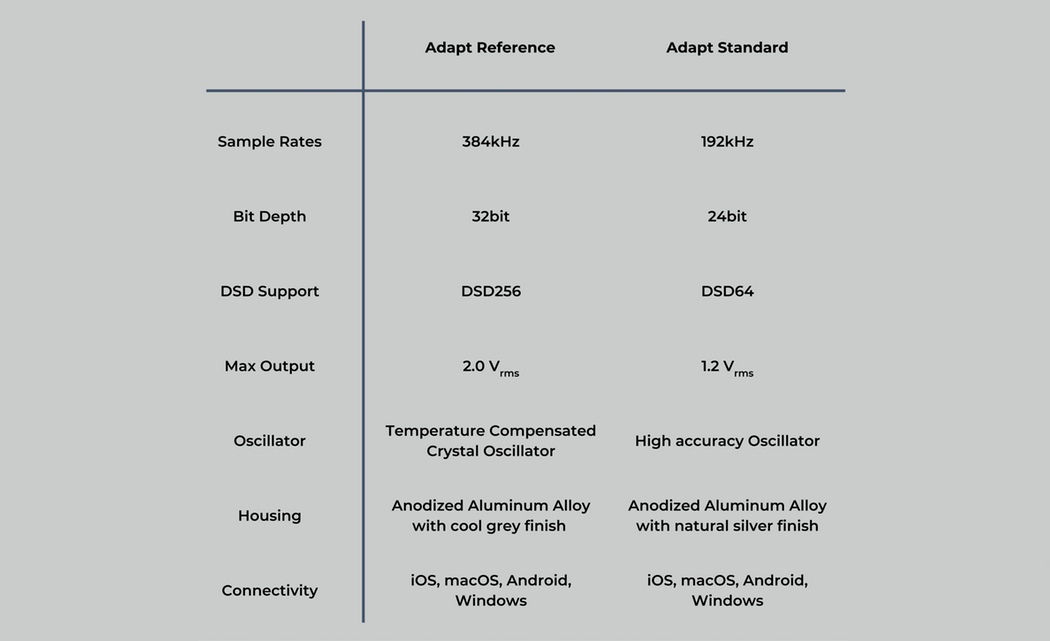 – Adapt Reference is for serious music listeners, music producers, hardcore gamers and anyone who wants to fully expand their listening experience.
– Adapt Standard is an affordable Hi-Fi DAC for audiophile beginners and enthusiasts who have interests in better music. 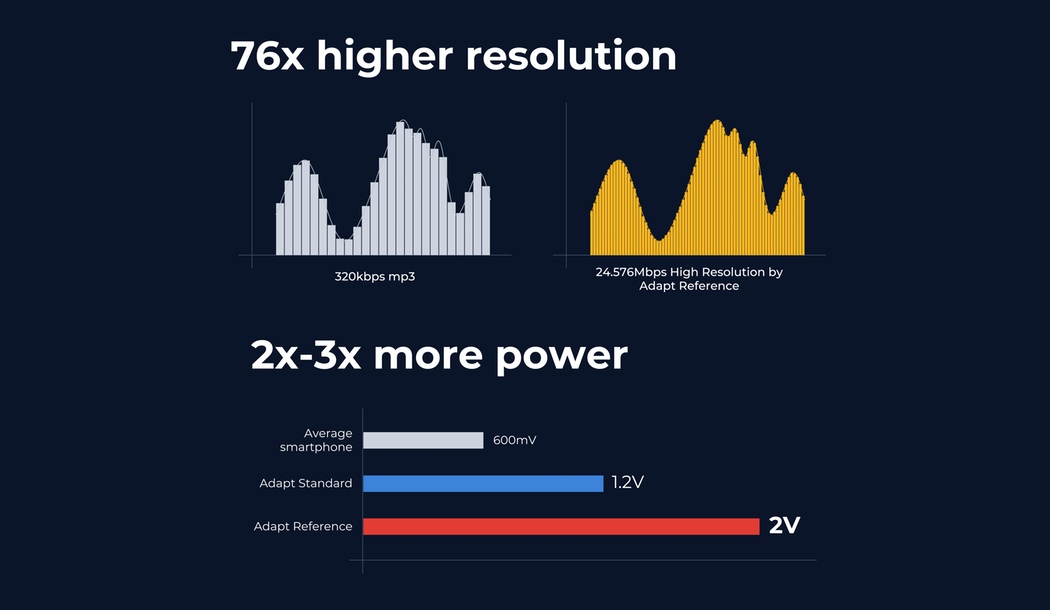 The two temperature compensated crystal oscillators(TCXO) in the Adapt Reference model differentiates itself from other portable audio DAC having more clean and consistent sound just like the high-end audio system.

Adapt’s high precision and high resolution gives you the best sound experience for any audio playback. Even the normal compressed music files and Youtube videos will sound much better.

Adapt can connect to iPhones, Android phones, macOS, Windows PC with a single USB Type C connection. Volume is synced with the source device for an easy user interface. 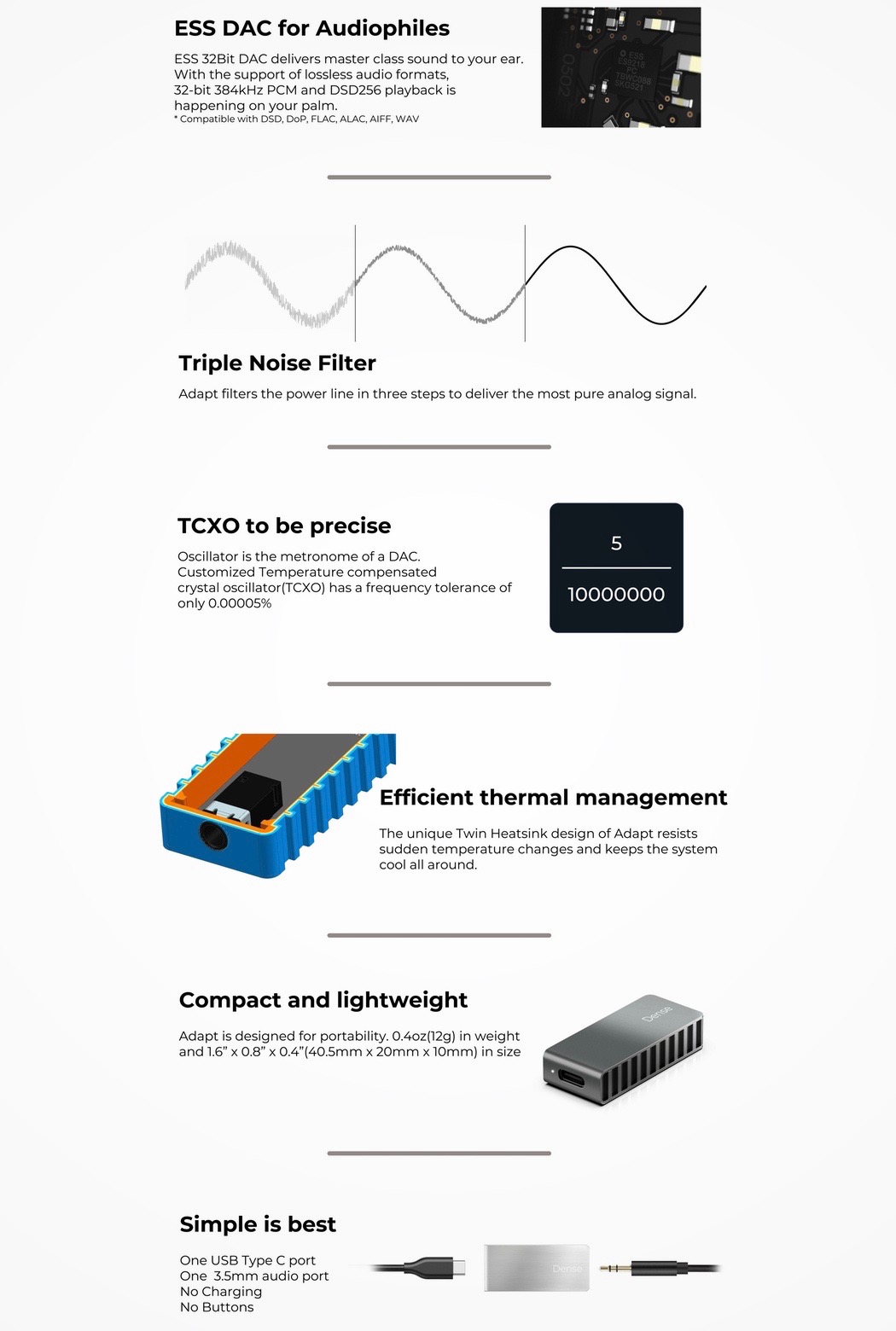 One Phone. Many Options.

The Fonkraft smartphone is all about modularity! Unlike other brands that carry a range of fancy to not-so-fancy devices, this smartphone starts with a base…

If you’ve got a problem with snoozing way past your wakeup time, the NEMO alarm clock is for you! The design features an enclosed roller…

Beefing Up Your Old Mobile Phone

Most of us still use ho-hum mobile phones. I don’t say that to be condescending but to create a distinction between most of the mobile…

What makes the A’ Design Award stand out from others is its mission statement. It wants to find a common link between great design ACROSS…