Below you’ll find the most popular designs we’ve tracked over the last 30 days – an overview of designs you shouldn’t have missed in April 2016.

Pull me to life drawer designed by Juno Jeon, takes references from living beings. The drawer itself looks like an animal on all fours, with its unusual wooden textured ‘skin’. The minute you slide the cabinet out, the skin comes to life by transforming in a way that may shock you at the first go, but will constantly keep you hypnotized by it forever after that!

The Nautilus designed by Mihir Gurjar takes every boy’s billionaire fantasy of owning a yacht, and combines it with the symbol of a gentleman, the fountain pen. The Nautilus’ design is classic in the sense that it forms a long-lasting bond with you. The design resembles a yacht (it isn’t easy to miss), and has a fluid organic characteristic to it, making it look both unique and desirable at the same time!

The Autographer designed by James Wood is a pretty nifty lapel camera that aims at being more of a fashion object than a tech-y gadget. Using materials like Leather and Canvas to cover the camera, the Autographer blends with your clothing. The controls are hidden at the back, only reinforcing the camera’s fashion statement. 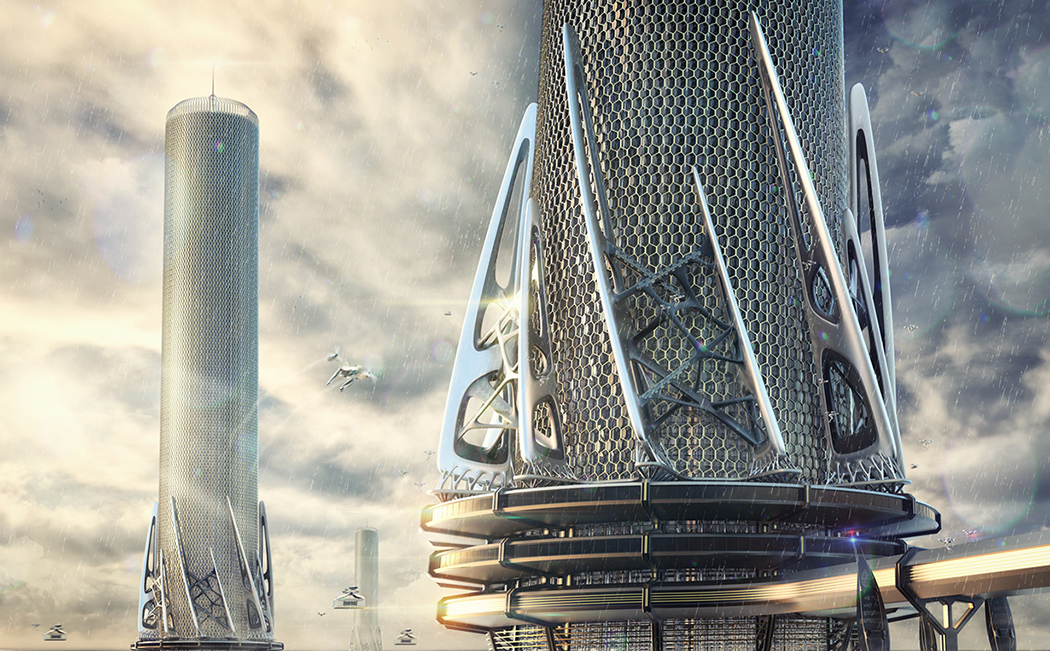 Unlock horizontal versions of today, Pillars of Flux designed by Erdem Batirbek & Keremcan Kirilmaz is a network of skyscrapers used as a vertical shipping port designed for expanding ports and emerging ports of tomorrow. The Pillars are detached from the city to free valuable shoreline for public use and its storage bodies are also designed vertically to save space on narrow gulfs and coves. 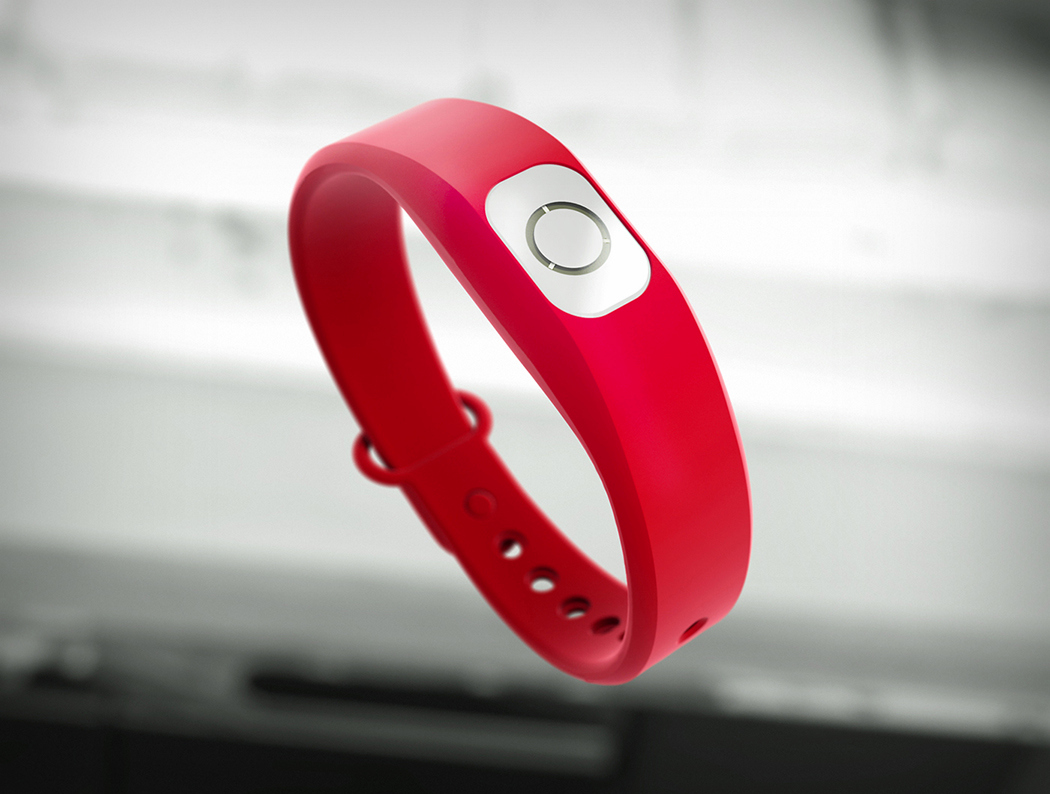 For parents who worry their child may stray away, enter Kiddo designed by Razy2 Design Group, a nifty wearable that allows you to know when your child gets too far from you, or from their friends/guardians. Kiddo is a band with a smart sensor on it. The sensor works off low amounts of energy, by communicating with other devices of its kind, instead of being a computer on your wrist. When you buy the Kiddo, you get two bands. One for you, and one for your child. Program the bands so that they know who the guardian is, and who the ward is, and you’re good to go. Kiddo will vibrate on the child’s hand to tell them they’re getting too far from the parent. Kiddo will also warn the parent of the same, by vibrating. 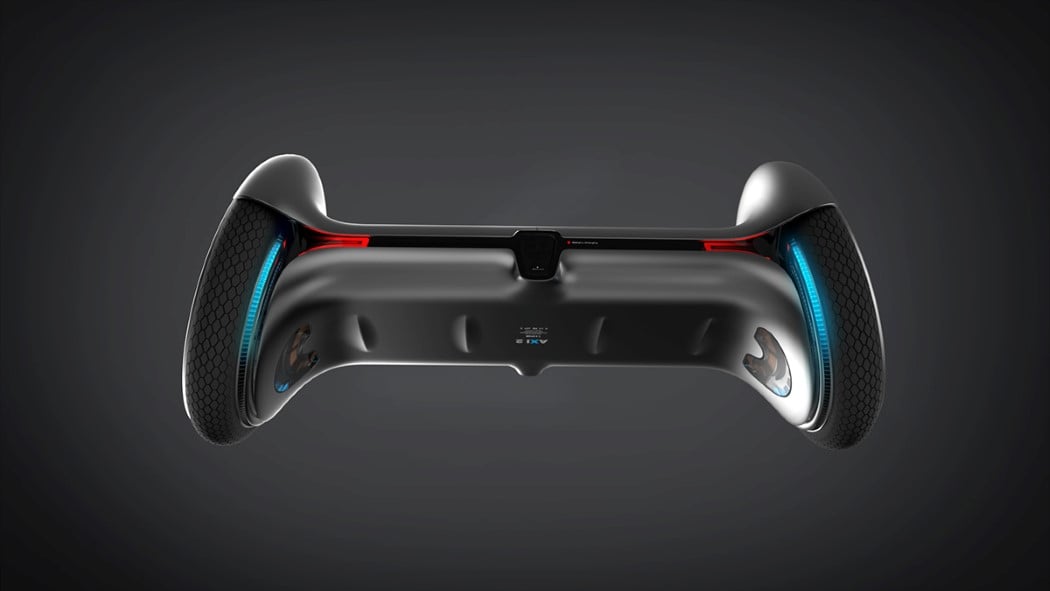 Most hoverboards look fascinating only because of the technology behind it. They seldom ‘look’ beautiful. I guess we could say the same about any gadget. There’s always a time when design takes over to make a product look like it redefines standards of beauty in its category. The Axi2 designed by Nepdesign is that design intervention in the hoverboard market. 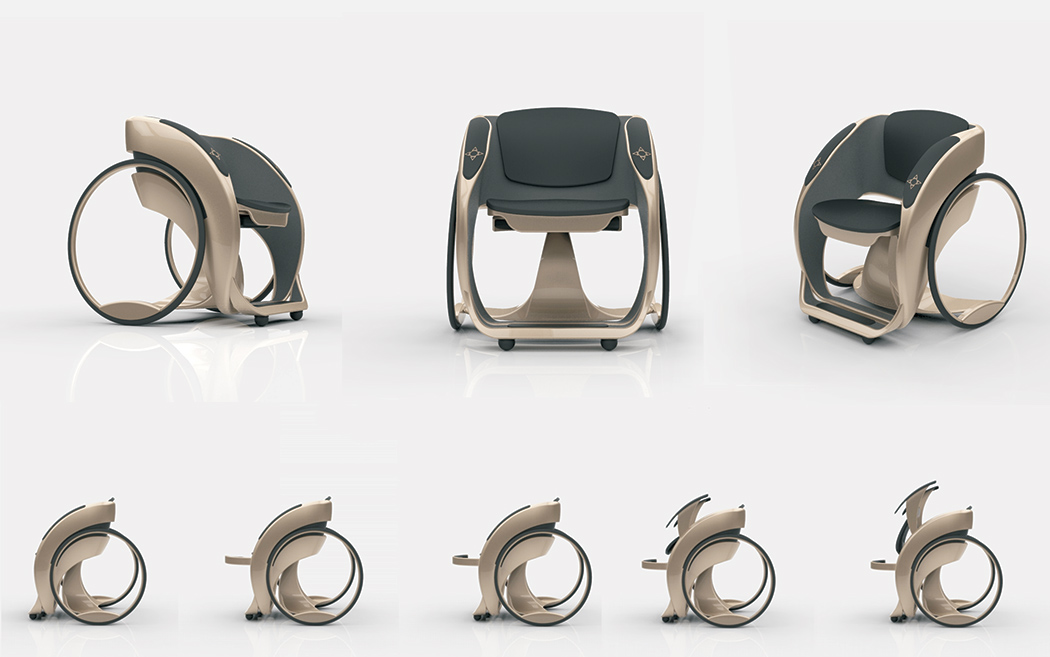 Like something out of an X-Men comic, this wheelchair designed by Adnan Curić combines a futuristic hubless design with automated features that together reduce stigma while maximizing mobility and functionality. 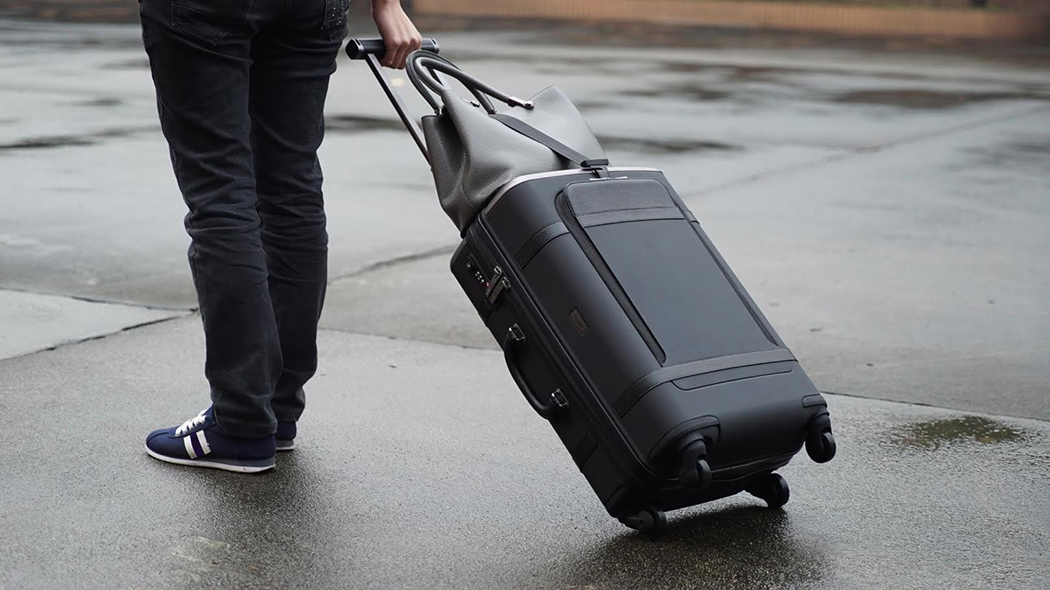 FLOATTI designed by Andrea Ponti isn’t just a luggage. In addition to the handle-scale and USB chargers for phones and laptops, the design also introduces some other truly innovative features. Use its digital trackers and mobile app to keep a remote eye on important objects. Ensure your belongings aren’t damaged with its one-of-a-kind wheel suspension system that absorbs the impact of bumpy surfaces. The coolest feature of all is a smart-handle that works in tandem with your phone. Hold your phone in one hand and control it with the touch-sensitive handle. Use it to make calls, control he camera, change music tracks and more! 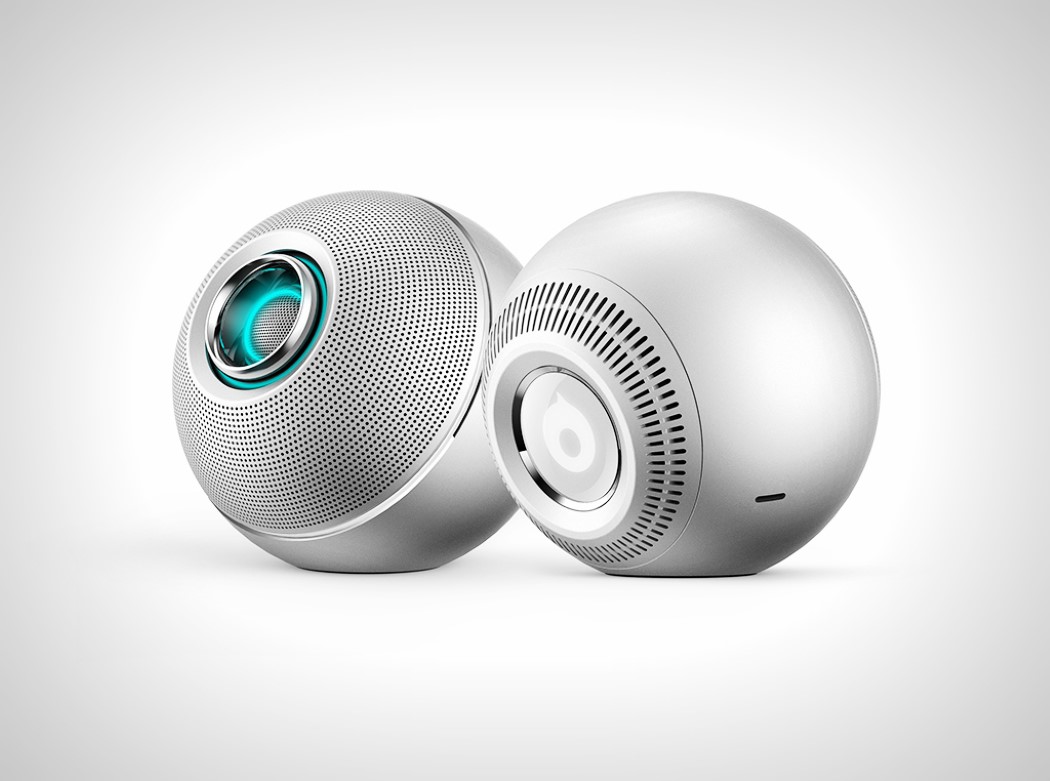 Luna Eye designed by Crazybaby Studio is a spherical speaker with quite some street cred. Not only does it pack a punch in the sound department, it also can be paired with more of its kind to create a network of audio devices that can stream from a single source. It also can WiFi pair outdoors, which is great because it has its own WiFi network and doesn’t rely on your home WiFi. 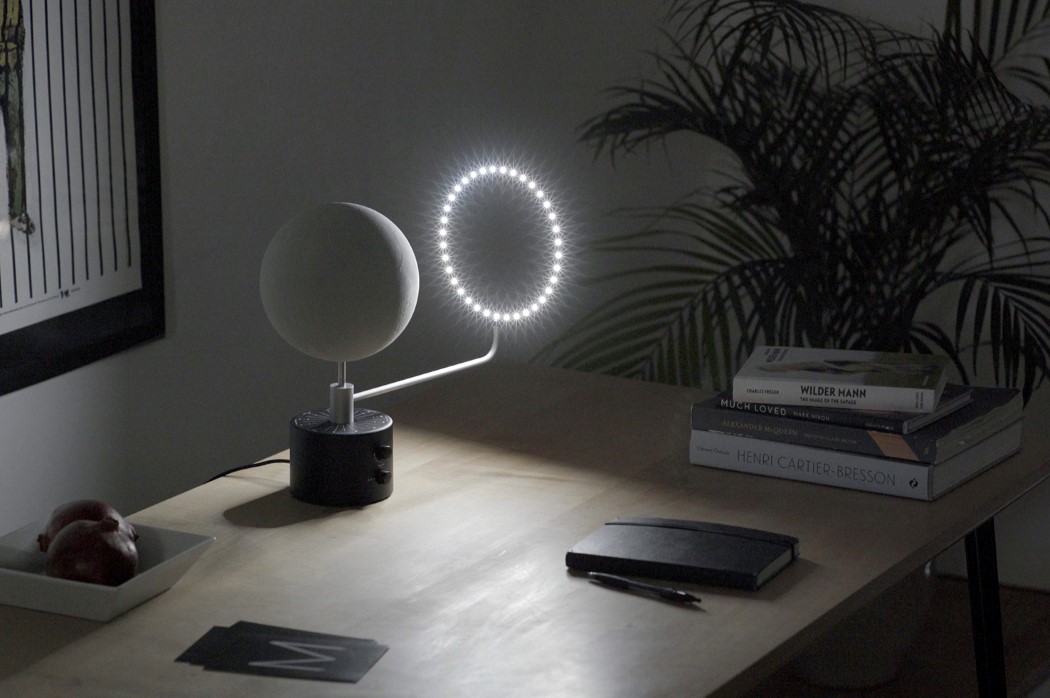 The Moon lamp designed by Oscar Lhermitte & Kudu Studio has us absolutely gobsmacked. The Moon lamp is a lamp that displays lunar phases. One can toggle between manual and auto, allowing the ‘sun’ to move around a brilliantly detailed replica of the moon, casting shadows that make the moon look so realistic, you’ll pinch yourself. Each and every crater is captured in this 1:20 billionth scale model of the moon, thanks to Nasa.

This smart wok is the kitchen superhero sidekick that automates your work every time you cook!

Quarantine has pushed a lot of us into the routine of cooking all of our own meals, which has been an easier dance to follow…

Intuitive functionality meets unpredictable geometric styling in this solid wood lamp by Amitrani. To turn on the embedded LED light, simply graze a finger across…

Some of the best products are created as a result of a direct, personal need. They say necessity fosters invention and Happy Ears are no…

Mosquitoes on a Mushroom

The biggest problem with camping is the battle with mosquitoes (and other creepy crawlies). No matter how much of the repellent you rub on yourself,…