This year’s finalists for eVolo Magazine’s Skyscraper Competition pushed the bar and came up with some fascinating and innovative superstructures. From a vertical farm skyscraper complete with cows and chickens to an abandoned oil rig turned chic urban habitat, this year was clearly about imagining fully sustainable vertical environments and finding new purposes for existing structures. Hit the jump and check out these cutting edge concepts! 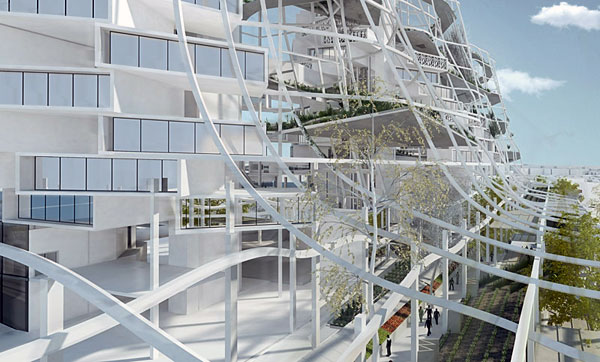 Because of geo-political and ecological reasons, Jerusalem is a city that is forced to expand internally. The Agro-Housing Towers introduces a vertical system of residential, commercial, and recreational spaces as well as agricultural housing as a sustainable and dynamic solution to urban overgrowth. 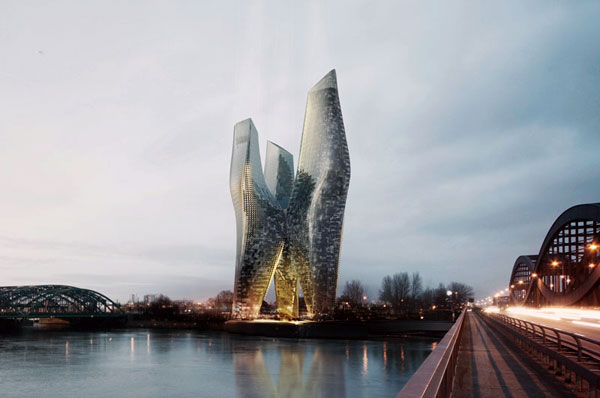 While I like a cool skyscraper, I also love when cities make efforts to maintain their beautiful skylines. The city of Hamburg is one of these places, and only allows buildings to extend as high as their tallest cathedral- except in one district known as HafenCity. These mixed-use towers, located in HafenCity, may “scrape the sky” but the structure does it’s best to reduce it’s footprint by changing it’s appearance through light and reflections so that it blends in with the skyline. The tripodal complex also allows the public to move freely and enjoy the area beneath it. 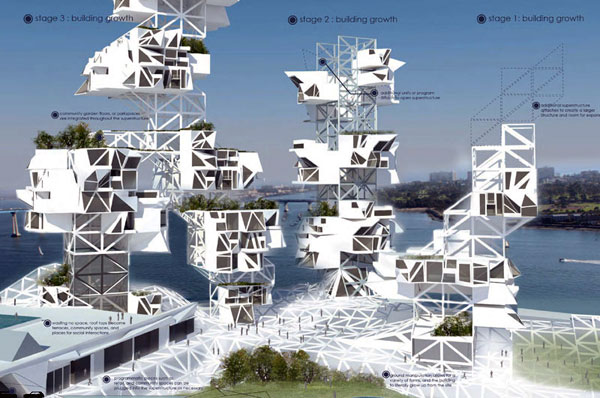 Rather than create a building with limited intention, the minimal FLEXmod Skyscraper allows units to be easily and efficiently added or taken away and stored depending on need, allowing the modular structure to grow, develop, and thrive instantaneously within a single structure. 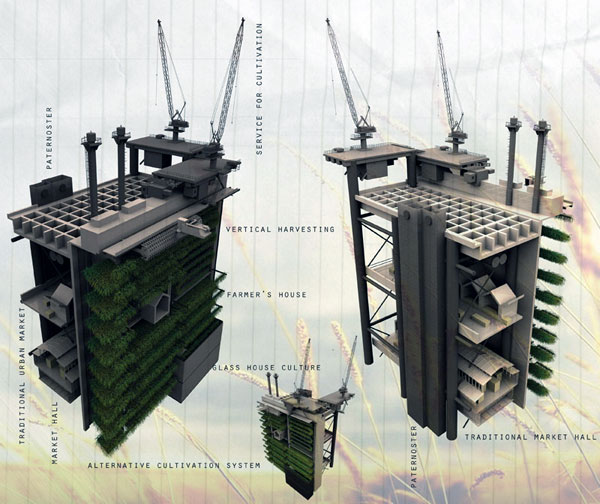 RuralScraper is an agrarian structure that supports vertical harvesting zones, each dedicated to a farmer specializing in alternative cultivation systems such as glasshouse culture, soil-less culture, and plastic bag cultivation. However unorthodox, each farmhouse takes influence from the style of traditional farmhouses. 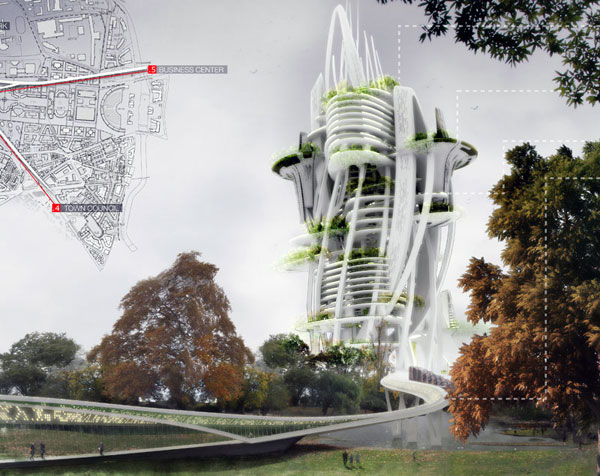 Inspired by the architecture of the tree, this skyscraper becomes the central hub of the city, merging the otherwise isolated parts of Montpellier by using a network of trains and cycling/walking paths that form it’s five “roots.” The mixed-use structure focuses on sustainability with solar panels, wind turbines, and water collection systems. 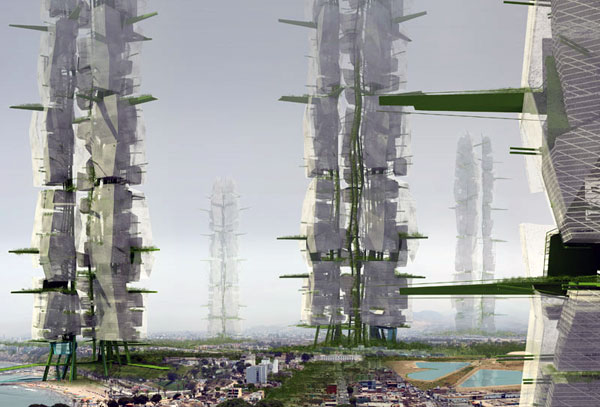 This large-scale design, influenced by shapes found in nature, includes 75 self-contained sustainable environments that consist primarily of water reservoirs and agricultural areas to transform Lima into a positive model for metropolises around the world. 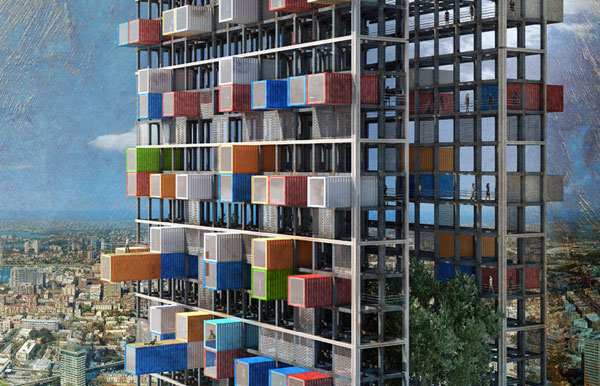 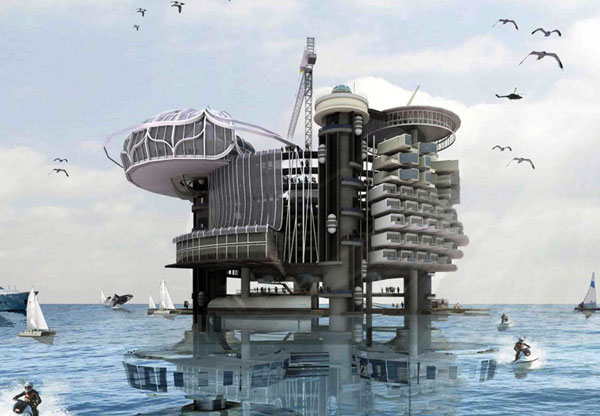 Out with the old and in with the new. This design takes abandoned oil rigs and transforms them into sustainable urban habitats that rely on wind, solar, and tidal energy for power. The underwater structure has been fitted with marine research facilities while offices, housing, and recreation areas lay above the water. I love that the original structural elements of the oil rig are obvious even with the additions and of course that every room has the best ocean view. 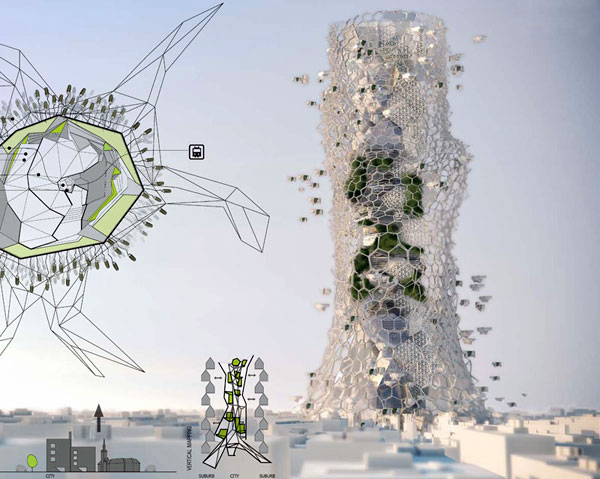 This structure aims to be not just defined as a self-contained community, but a vertical city that even includes the suburbs. Mapped out much in the same way as a horizontal city grid, the central part of the building is the hub for offices, commerce, and entertainment, while the outer ring consists of residences. Beyond the cellular Voronoi exterior are larger “suburban” dwellings with yards and gardens that overlook the city. 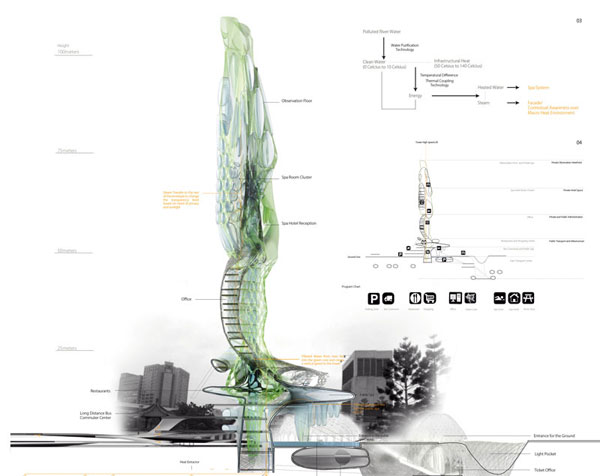 Placed on the central part of the River Danshui in Taiwan, the building replaces an existing river buffer wall with a filtering system. The system cleans the polluted river water and creates usable energy by collecting energy from both the river current and from the surrounding transport systems which help turn the water to steam to power the turbine-generator system. Additionally, hot water and steam can be circulated throughout the structure for use in the landscape as well as showers and the hotel spa. 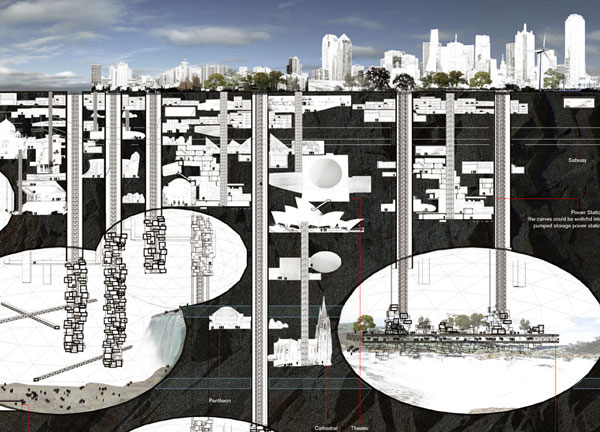 Designers Fan Shuning & Zhang Xin didn’t just design a vertical skyscraper, they designed an entire underground metropolis fit with concert halls, theaters, housing, and even a museum. With other improvements in lighting and ventilation the underground city is meant to ease the tension of working in the mine and provide an overall better quality of life to coalminers. 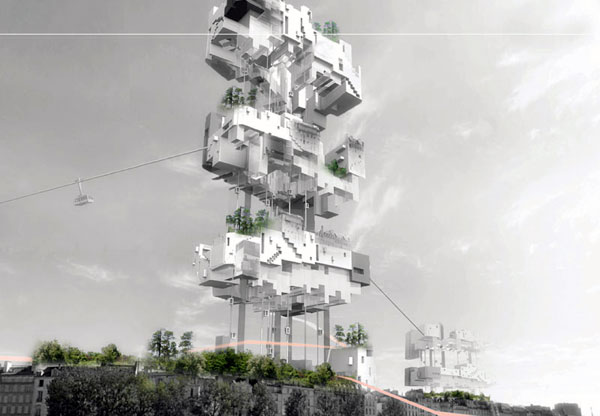 Vertical Paris is a response to the criticisms of Tour Montparnasse, a skyscraper completed in 1972 that was thought by most to be an eyesore of gigantic proportions as it didn’t fit in with with the existing urban landscape.  Each section of Vertical Paris is like a mini-neighborhood stacked above another mini-neighborhood with picturesque streets, pedestrian walkways, & parks in between individual buildings. The new structure brings the verticality of new Parisian skyscrapers and the traditional horizontal city together. 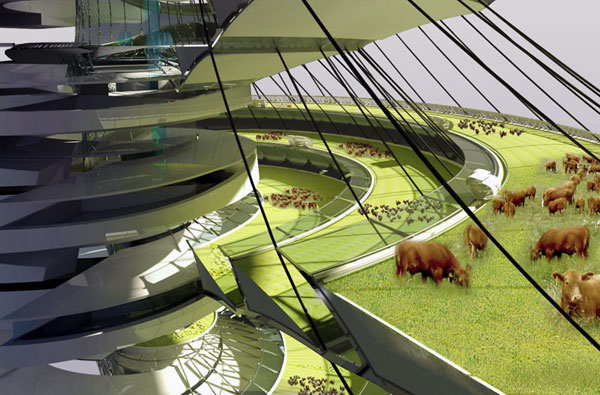 The vertical farm has got to be the one most conceptually “out-there” designs in the competition, and it happens to be my personal favorite. Being a city slicker now, I rarely tell people about how I grew up on a ranch, but if it had been anything like this I’d have some serious bragging rights. What separates the Vertical Farm from other agricultural skyscrapers is that it has been adapted for raising livestock. Spiraling platforms of grass fields provide grazing ground for cattle which move upwards as they continue grazing while other livestock are kept at already pastured areas. 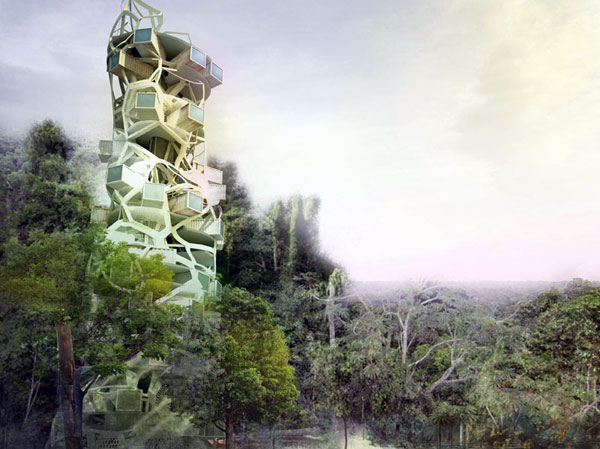 Located in the heart of the Amazon forest, the aim of the Laminated Wood Skyscraper is to provide a sustainable environment for recreation, research, and observation to educate visitors on the alarming rate of deforestation in it’s native Brazil. The framework of the structure consists of prefabricated laminated titan-wood elements that support floor plates and and prefab shipping containers. A network of embedded veins in the woodwork transport rainwater that is then collected, processed, and redistributed throughout the building. 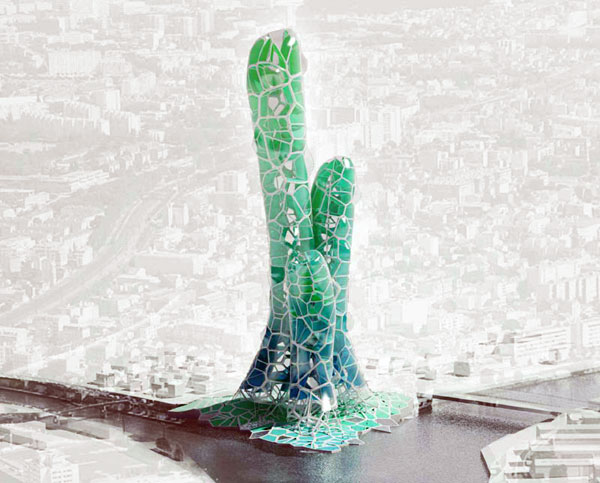 Located at the base of the Seine River in Paris, the Porifera is divided into 3 towers for hotel, housing, and offices. Inspired by marine sponges, the Voronoi patterned exterior features large openings and harnesses wind, solar, and kinetic energy. The building even creates it’s own bio-fuel by synthesizing algae with sunlight exposure while gardens in the top floors and hydroponic green houses create sustenance for the community.

Ok don’t be shy, but who here has always secretly wanted some group action? You know, the kind of action where hands come from every…

Looking for the perfect marriage between a digital scale, measuring cup and a mixing bowl? Your search ends with this awesome SmartMix! A notch up…