Reminiscent of those modular robotic arms you see in megafactories that do everything from assembling iPhones to putting cars together, the HUENIT scales that tech down, bringing it into the household.

HUENIT is an AI camera and modular robotic arm that can practically be your everyday sidekick. It supports a screen and camera that can recognize objects, people as well as their voices. It also has a modular attachment system that lets you connect HUENIT’s different modules allowing this robot arm to perform activities like picking objects up, sketching, 3D printing, and laser engraving, and way more. Think of it as your own personal J.A.R.V.I.S. , sir! 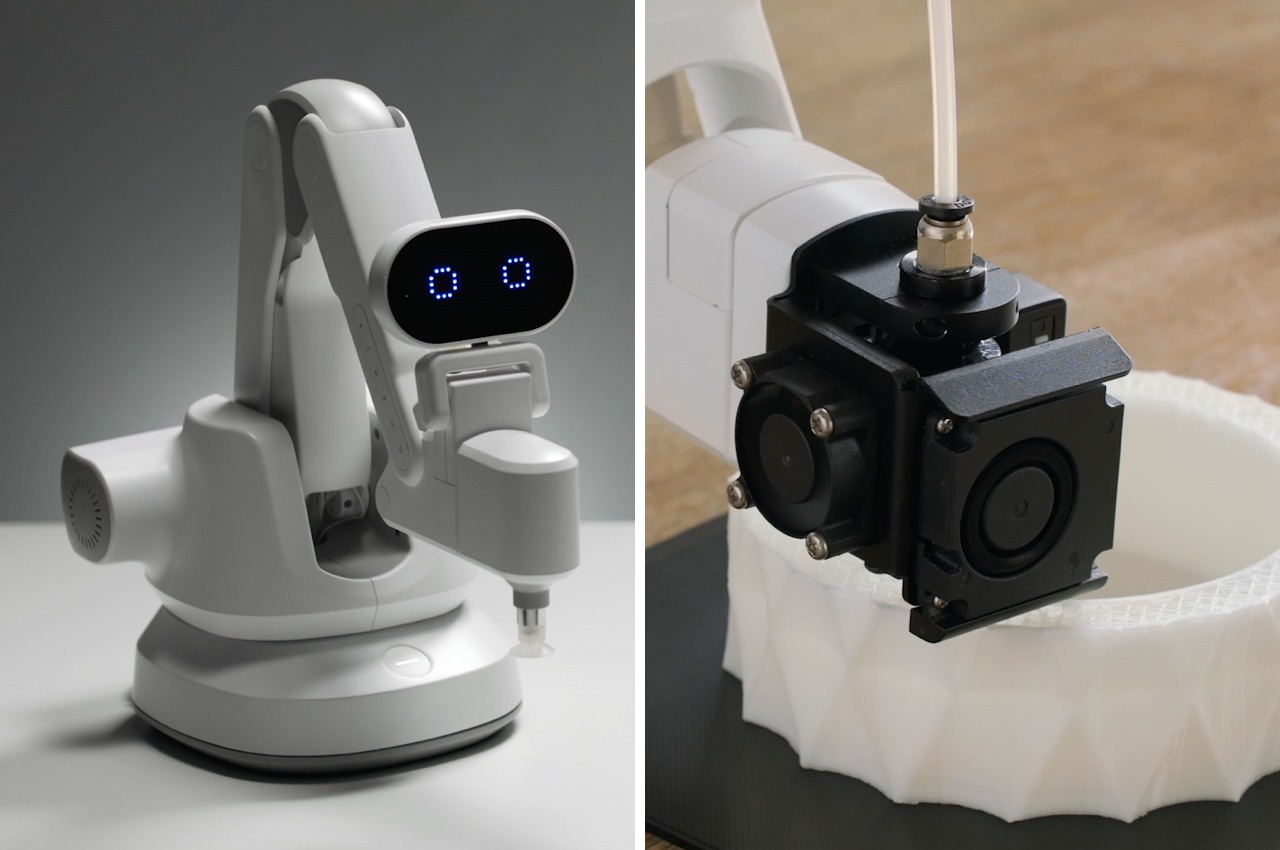 HUENIT’s capabilities are frankly limited only to your imagination. The tiny robotic arm can fit on any tabletop surface and can carry payloads of up to 750 grams, reach distances of 390mm, rotate up to 200°, and even repeat tasks with an accuracy of 0.05mm, at speeds of up to 550mm per second. The arm supports 3 hinge points (just like a human arm that pivots at the shoulder, elbow, and wrist) and can be programmed to complete a wide variety of tasks based on the modules you attach onto it, using a touch-sensitive remote controller or even HUENIT’s own software that supports block coding, Python, and Arduino C.

While the robot’s flexible arm gives it a great degree of range, it’s the wide variety of modules that unlock its true potential. The robotic arm sports a proprietary connector setup that lets you add HUENIT’s modules to the arm.

A 3D printing module lets you easily print onto any surface, with the HUENIT arm automatically leveling the extruder at the start of the job.

A laser engraving module comes with a 2500W laser that can engrave and/or cut a wide range of materials, from wood to fabric, leather, paper, and even anodized aluminum.

For sketching purposes, a pen-holder arm turns the HUENIT into a drawing-master, allowing it to draw or write art on any surface — HUENIT’s ability to repeat tasks is incredibly useful for creating multiple copies of the same artwork.

Other modules also include a suction module, a soft gripper, and a versatile creator module that lets you use your HUENIT to do anything from holding your phone and taking stabilized videos, to even stirring your pot of pasta!

While the robotic arm works independently, you also have the option of attaching an addon AI camera that can recognize people as well as objects, helping unlock even more features (like sorting coins or LEGO blocks). The AI camera comes along with a screen that serves as HUENIT’s ’emotion center’, with a set of cartoonish eyes that help anthropomorphize your robot buddy.

The 4-axis robotic arm runs on a 24V DC power supply and has its own SD card and USB-C input while also supporting connections via WiFi and Bluetooth. HUENIT is compatible with Windows, MacOS, and Chromebook devices, and is perfect for creators, tinkerers, engineers, and anyone curious about robotics. You can grab the HUENIT’s basic tier, with just the creator module for $649, or the entire kit featuring all the modules along with the AI camera for $879. HUENIT ships worldwide, and your friendly robotic arm should ideally be in your home/office by July 2022.

What we know about the iPhone 8

Let’s do a rumor recap for the iPhone 8. Unlike some people speculated, it obviously isn’t transparent. It still has no headphone jack (sad-face), and…

Kids shouldn’t be given screens whenever they have tantrums. Meltdowns are a parent’s nightmare so to avoid such, more often than not, most parents just…

Trekking Accessories designed to be the perfect outdoor companion for adventure lovers!

We’ve entered the fall season, and in midst of pumpkin spice lattes, and brown leaf litters, the bug for trekking and hiking is reaching an…

https://www.kickstarter.com/projects/markomatijevic/ninu-smart-perfume Like a bartender for fragrances, NINU is a portable little gadget that “designs” the perfume you want by combining fragrances that you can then…