LG, Autodesk, and crowdSPRING in the same breath can mean only one thing: Time to participate in LG’s Design The Future Competition. This year there is a certain twist in the tale, so do you consider yourself a designer up for a real-world challenge? There is little room for speculation because you need to design a revolutionary mobile device that will appeal to the cellphone-generation of United States, 2-3 years down the line. Drawing up a long list of specs will get you nowhere, but illustrating an innovative new experience or story on a 1024 x 3072 pixels page can win you some real handsome booty. There’s even a chance to have your design be made into a non-working mock-up by guest judge Russell Bobbitt, a world renowned movie prop master (Star Trek, Iron Man and Iron Man 2). Imagine seeing your mock-up in Bobbitt’s next blockbuster film. How cool would that be? 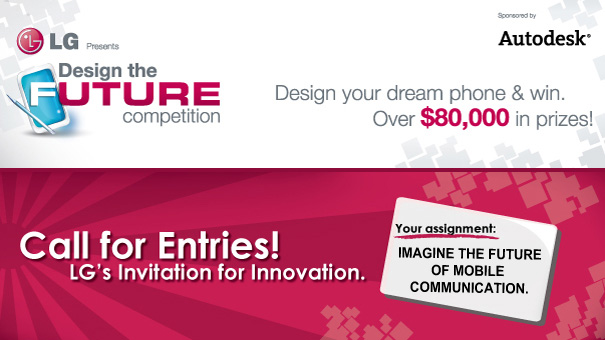 Eligibility: Any U.S. resident (citizen or green card holder) that is 18 years (or age of majority in state of residence) and older.

Winners will be announced on May 14, 2010 at www.crowdspring.com/LG/winners.

Official rules can be found at www.crowdspring.com/LG

UPDATE: June 8th is the LAST DAY for Submissions; 7 days left. ZINK Imaging is asking the design community for new “solutions” and applications (not…

Picture this – its a hot humid day, you come home and cool off with a chilled beer, switch on the air conditioner and relax…

IDEA 2014 is in full swing and the regular entry period ends on Feb. 14! Yes, you have a date with destiny. Winners receive prestige,…