Who’s up for some cabinet design? I am. Let’s do this. We’ve got some flatness, some whiteness, some mirroring, some rounding, and some televisions and speaker equipment placed in there. What do you know! Four objects, one post, one design group: the Art S=4pieR2 sphere, the Mystere Hyde, the Why Not, and of course, the Soul of Pop.

We start with the wildness. This “Art S=4pieR2” is spelled a bit incorrectly, but you can see the correct characters below in the image. This bit of suspended-in-space furniture has two flat sides – one’s an LCD screen for television, the other’s a mirror. The rest is for where you’d put your decks of cards and Faberge eggs and such.

The second, the long one, aka the “Mystere Hyde” is a visual technology piece. Foremost it is a gigantic gal-darned mirror. It’s big enough to see Aunt Edna in. Then what do you know! The middle flips up to reveal a 42″ LCD screen tv again! I feel like I’m on “The Price is Right.” Also there’s shelves under the big mirrors also -flip them up as well.

The “Why Not” is the simplest of the bunch, with four panels: a mirror, a cabinet with a glass panel over it, a television, and some shelves with no cover. Very square.

And last we’ve got one magnificent magnitude of a proportion of modernism. This amalgamation goes by the name “Soul of Pop” and has lots of roundness to it. Several of the panels are mirrored in the back, the television in the center has a mirrored glass front, and look! Two of the shapes match – they’re symmetrically placed! Those are the speakers.

Base for your face. 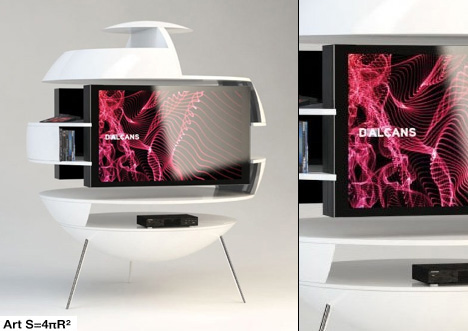 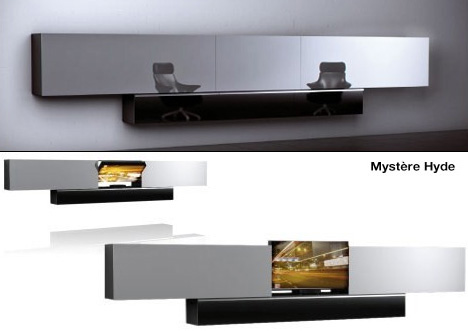 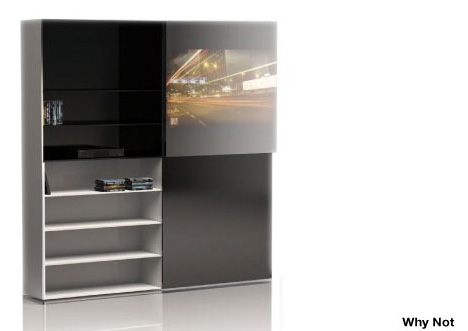 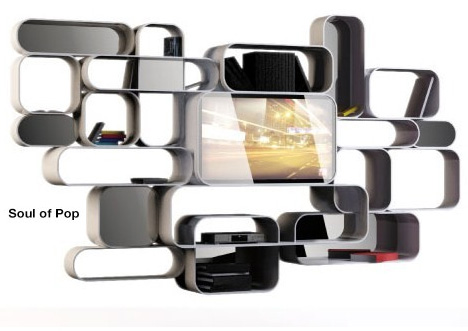 Don’t Be Caught Without Flower Frames!

Cedric Ragot designs his way in to a box. When you’ve got a house you want placed in some new Shui sort of order, you…

The inspiration for this particular hanging lamp comes from the famous Chesterﬁeld sofas (Capitonné), their fabulous and extremely recognizable pattern of pillowy poofs added to…

You’ll be rocking in this. When I first looked at it, I thought it was a giant Pringles chip. But it’s not! And it’s no…

While visiting a natural history museum, designer Jingfeng Fang got inspired when admiring a piece of wood that had been devoured by worms. For this…