The competition, inspired by LA County Measure R—a half-cent sales tax hike that promises up to $40 billion in transit funding for the city— attracted 75 proposals from around the world. It offered architects, engineers, urban planners, and students a chance to propose new ideas for the city’s transit infrastructure. Their entries focused on specific rail extension projects in the city and also take a look at larger-scale, interrelated planning challenges. 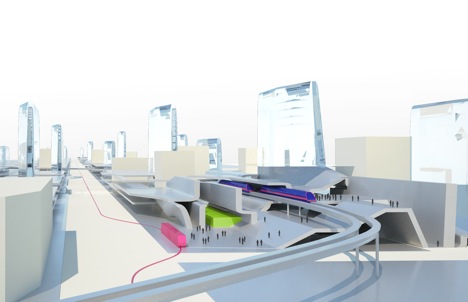 Más is regional high-speed rail for Los Angeles with a landscape to match. Promoting dense, organic development, it diversifies the communities in the built environment, making travel less necessary, easier and more predictable, and bypassing roadway congestion through a new raised infrastructure. Looping around the city, with connections to subways and buses, Más links local and inter-regional commuting; providing frequent service that will also sync up with the California High Speed Rail network. San Diego via más is less than an hour away, including transfer times; San Francisco is less than three hours away. 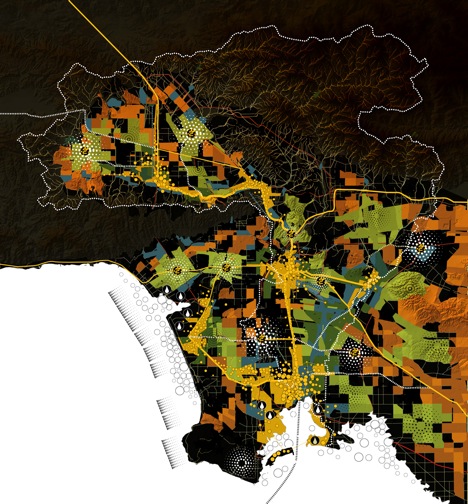 Recognizing the vital role that mobility, water, and sewage will play in Los Angeles’ future, the city must begin to invest in a core armature of new bundled infrastructures which will allow the city to survive the impending reality of peak water and peak oil.  The city must reorganize along the matrices of transportation, water and sewer networks, and grow infrastructural tentacles out into the world to ship and receive. 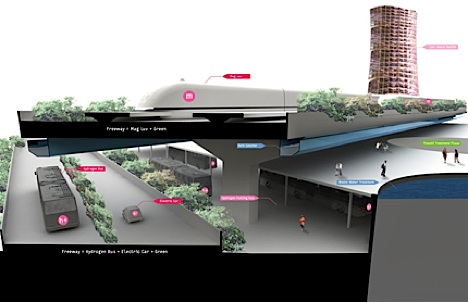 The scheme proposes eroding a portion of the freeway and supplanting it with a new object, mode, and form for adoration—Mag Luv. The high speed magnetic levitation peripheral train appropriates freeway, right of way, and “dream space” to become the mega structure of the Los Angeles transit system. The loop circumnavigates the city providing 12 hubs of activity, transportation, and power production.

These floating island parks could be a part of our new normal!

Cherokee Studios by REthink Development is a new soon to be completed project in Los Angeles boasting LEED Platinum certification. Huge Kudos to REthink since…

Sustainability has been running on everybody’s mind. And with everyone aspiring towards eco-friendly and mindful ways of living, tiny homes have completely taken over the…